Value is something that people tend to, well, value a lot no matter what the industry. We’re always looking for sales to validate a purchase or sometimes we’ll even stall on a purchase in the hope of an upcoming sale.

There’s nothing wrong with that, obviously. However, sometimes we are willing to pay full price if the product is actually that good. For instance, some people say paying anything more than $30,000 for a vehicle is foolish. After all, there are plenty of vehicles that can get you from point A to point B for much cheaper. But those people are not car people. In fact, I would hazard to say those sorts of people probably have no soul.

With that said, regardless of how much you are willing to pay for a vehicle, you still want to get a good deal.

Knowing this, and knowing the sheer popularity of their brand, Jeep has decided to expand its line up in order to offer a Jeep that is affordable for even the soulless-indifferent-to-cars humans of the world.

Enter the Jeep Renegade; the baby Jeep. It’s just the latest vehicle to enter the fairly new and hotly contested compact SUV segment. Does it have the goods to don the Jeep logo? 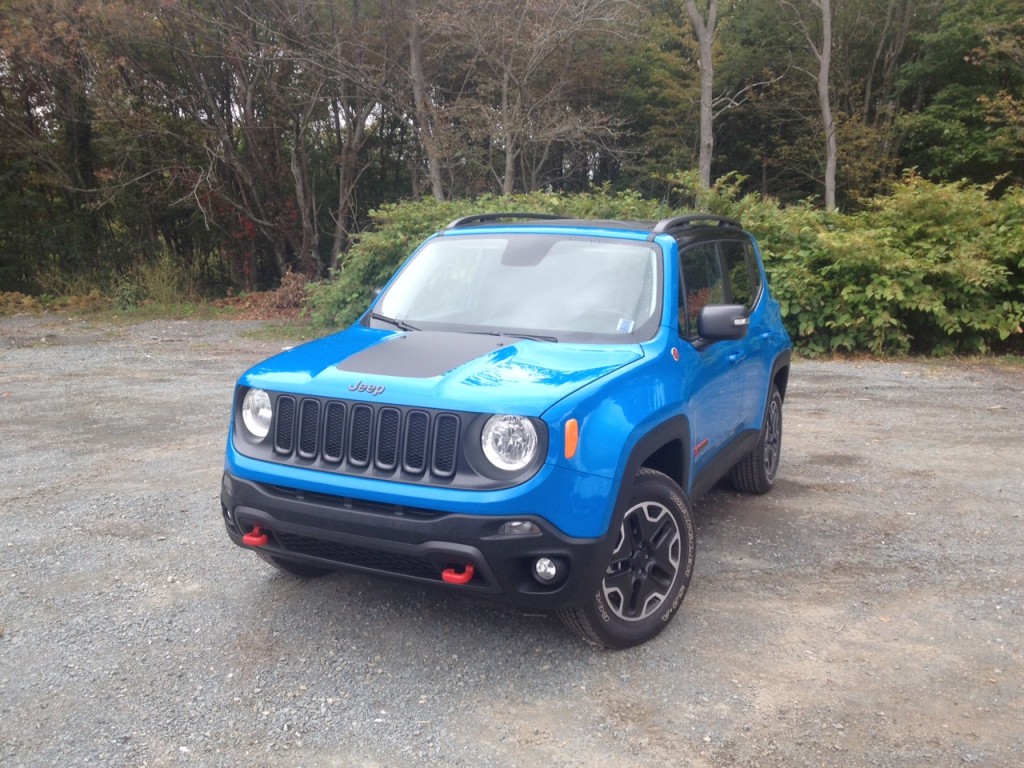 The Renegade has probably one of the most charismatic exterior designs I’ve seen on any recent production vehicle. Not only does it wear Jeep’s famous rounded headlights and 7 slotted grille, but it also incorporates a plethora of Jeep nostalgia and Easter eggs. That’s right, Jeep put their youngest designer in charge in order to come up with styling details that you actually have to go out of your way to look for in order to find. The round headlights and 7 slotted grille is actually found throughout the exterior and interior of the Renegade. Trying to find them all is actually a fun game. On top of that, there’s also a few strange Easter eggs like a Yeti etched into the back windshield (that is only visible from the inside thanks to tinted glass) and a spider with a speech bubble saying “Ciao baby!” located next to the gas cap, referring to the Renegade’s Italian influence (the Renegade shares its DNA with the Fiat 500x and is built in Italy). Perhaps one of the most obvious and controversial traits is the X shaped reverse lights which is meant to mimic the gas can on old military vehicles. 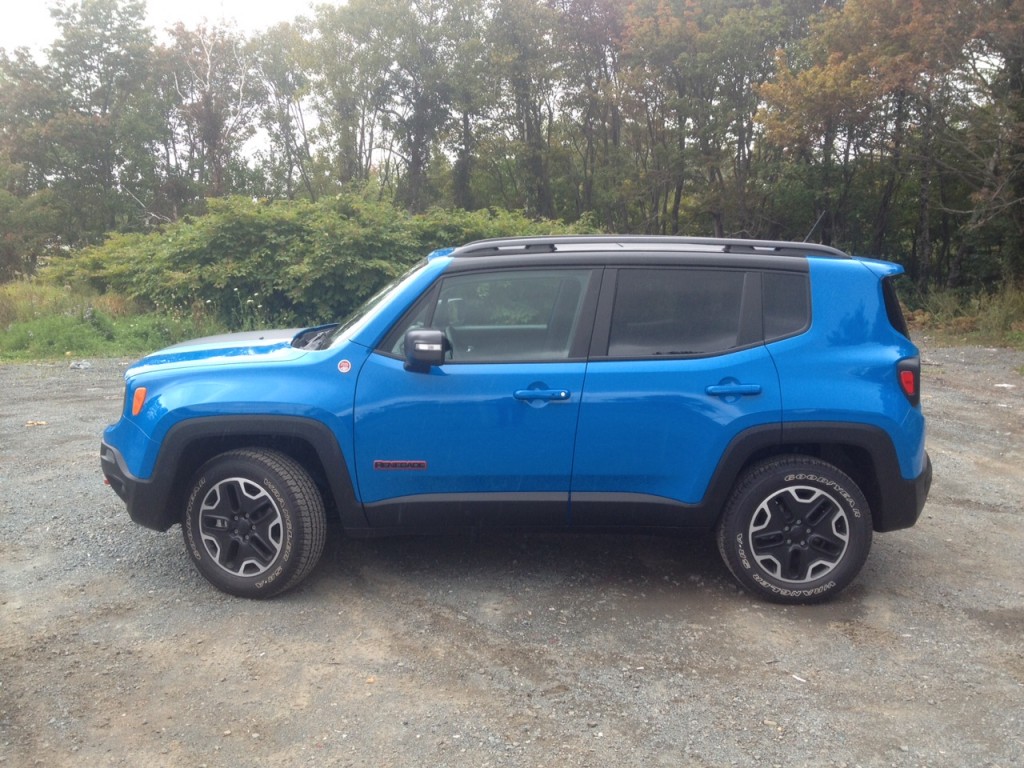 The look itself is certainly polarizing. One of my friends commented that my Renegade tester in Sierra blue made it look like a Barbie Jeep while another called it adorable. Another referred to it as cartoonish and another called it rugged. Whatever your thoughts, Jeep has certainly come up with a design that will not only get the Renegade noticed but it will also get people talking. 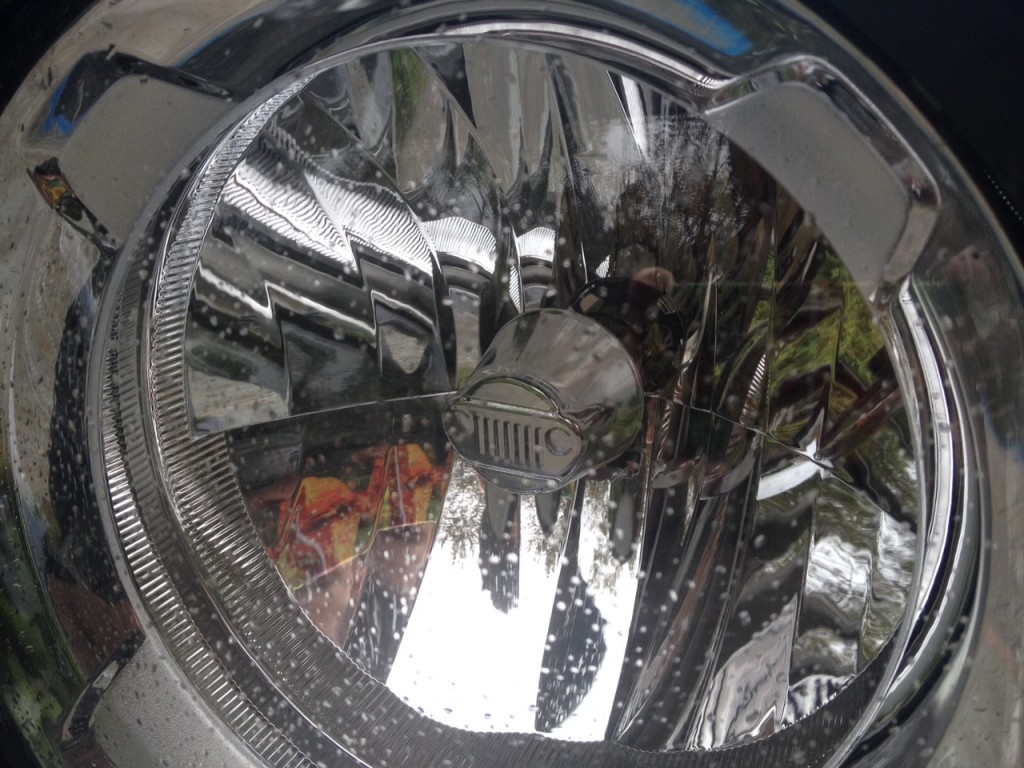 Inside, my tester was fitted with a black with red trim which is odd because it doesn’t seem to match the exterior colour, but you do eventually get used to it. While the interior isn’t nearly as nice as the Grand Cherokee, it’s adequate even if there are some hard cheap feeling plastics here and there. My tester also came with Jeep’s optional ‘My Sky’ roof. Basically it’s two panels; one of which can at the push of a button not unlike a traditional sunroof, however since it is a panel rather than glass, you can’t actually see out of it when it’s closed. If you’d like to go full open sky, you can remove the second panel but it must be done manually and you can’t do it when the first panel is retracted. On top of that, you need a special tool in order to remove both panels and I almost guarantee that a Renegade owner will lose it over the course of ownership. The Renegade does come with a special bag to place the panels in when they are removed, to be placed in the decently sized cargo area. Basically, the idea of open air driving in a Jeep is ruined by a complicated and time wasting system. I wouldn’t opt for the My Sky option. 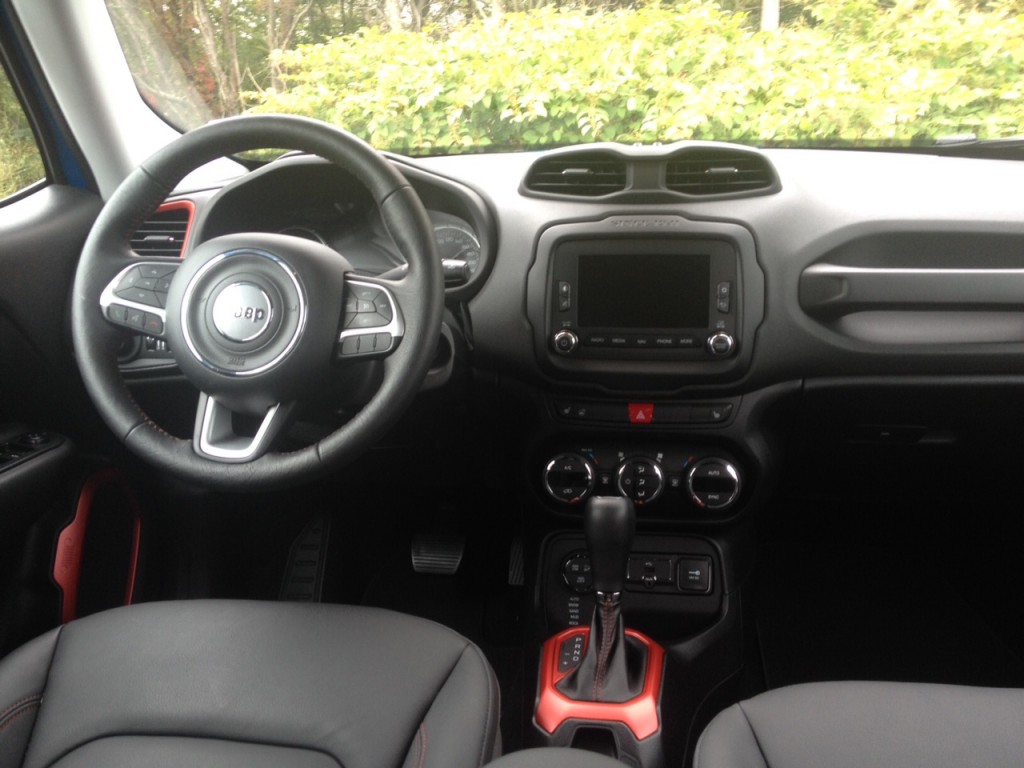 Despite it’s small size headroom is in abundance and rear passengers would likely call leg room adequate. Up front, however, the seats aren’t the most comfortable I’ve ever sat in and just like in the Dodge Charger I recently tested, it was difficult to find a comfortable driving position. Happily, my tester came with Chrysler’s U-Connect system which, despite the cheesy name, works tremendously and is among the best in the business in my opinion. 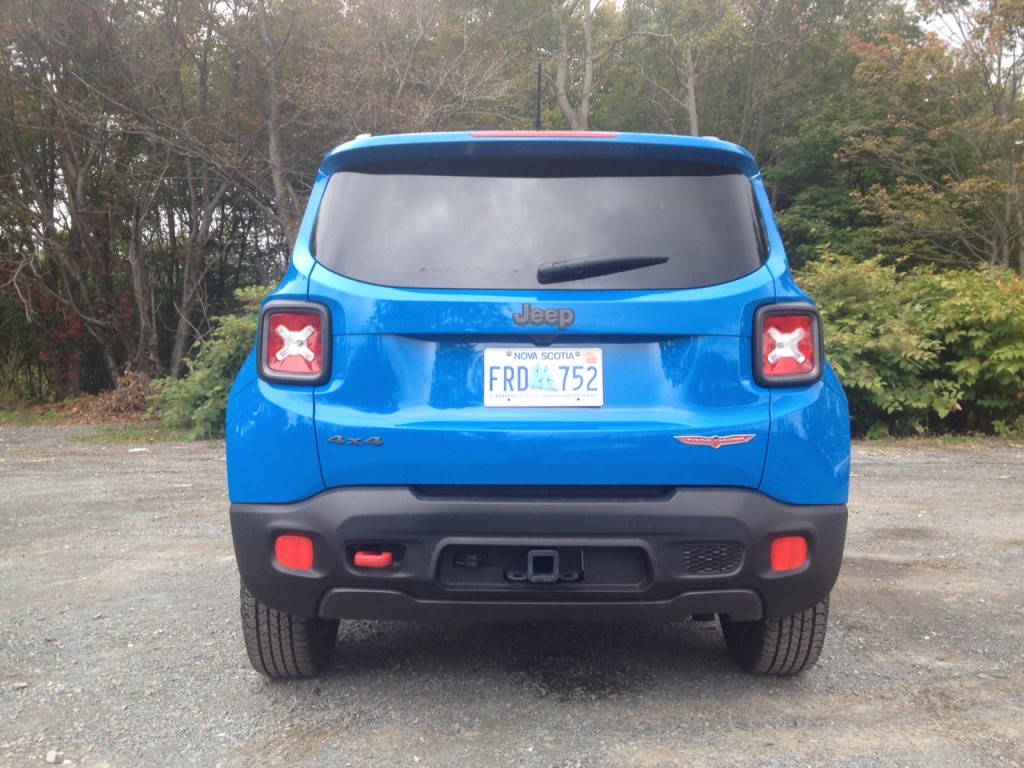 Now, the Renegade comes with two engine choices: a 1.4 litre turbocharged 4-cylinder which produces 160 horsepower with 184 pound foot torque, or my tester’s 2.4 Tigershark 4-cylinder making 180 horses and 175 pound feet of twist. The 2.4 comes with Chrysler’s 9-speed automatic. That doesn’t sound too bad on paper right? But in practice this engine/transmission combo comes up short. Well short. 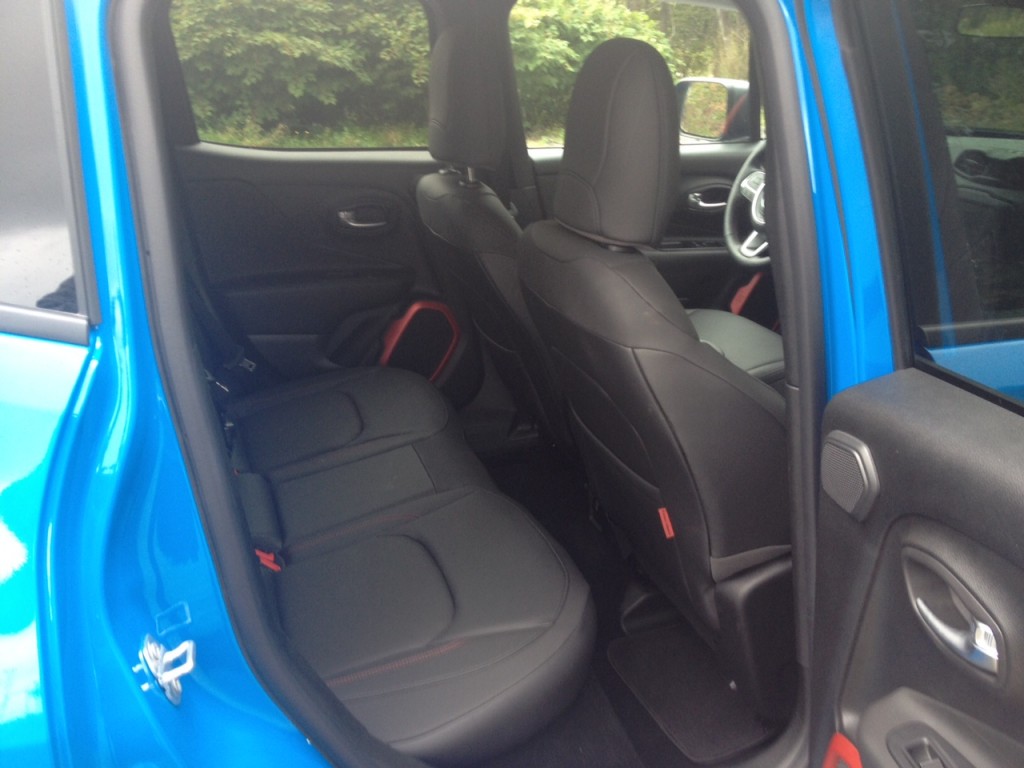 Not only does the engine emit a rather unrefined buzz when pushed, but it doesn’t even feel as if it’s making anything close to 180 horses. On top of that, the 9-speed seems to forget that its only purpose in life is to shift gears at the appropriate time. It’s dim witted and indecisive:

“Oh you’re trying to merge onto the highway? Alright that means I need to do something. Hmm. What…is….it? Oh! I need to downshift so you can get the power you need! Got it. Okay, I have nine gears to choose from so which should I choose…hmm…”

By the time it’s made a decision to downshift, you’ve already merged onto the highway but are going well below the speed you should be at.

It’s been a really long time since I’ve experienced such a mismatch between engine and transmission. The good news is simple city driving is much less painful. 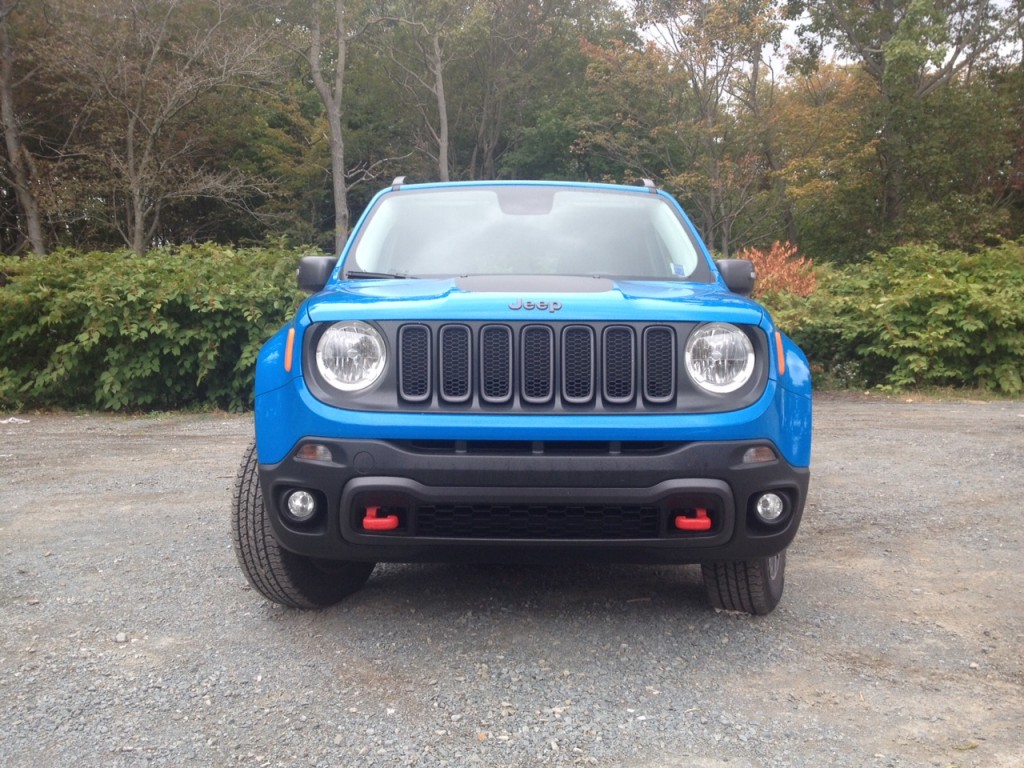 Now, being a Jeep, the Renegade could and should be expected to do Jeep-like things such as climb cliffs, wade through water and effortlessly jump over the concrete curbs. Truthfully, most Renegades aren’t equipped to do so unless you select the Trailhawk model. This model means it can do all those Jeep-like things by adding skid plates to protect its underpinnings, tow hooks, a higher ground clearance and four-wheel drive lock. You can also select a host of different driving situations for the Renegade to tackle including snow, mud, and sand. 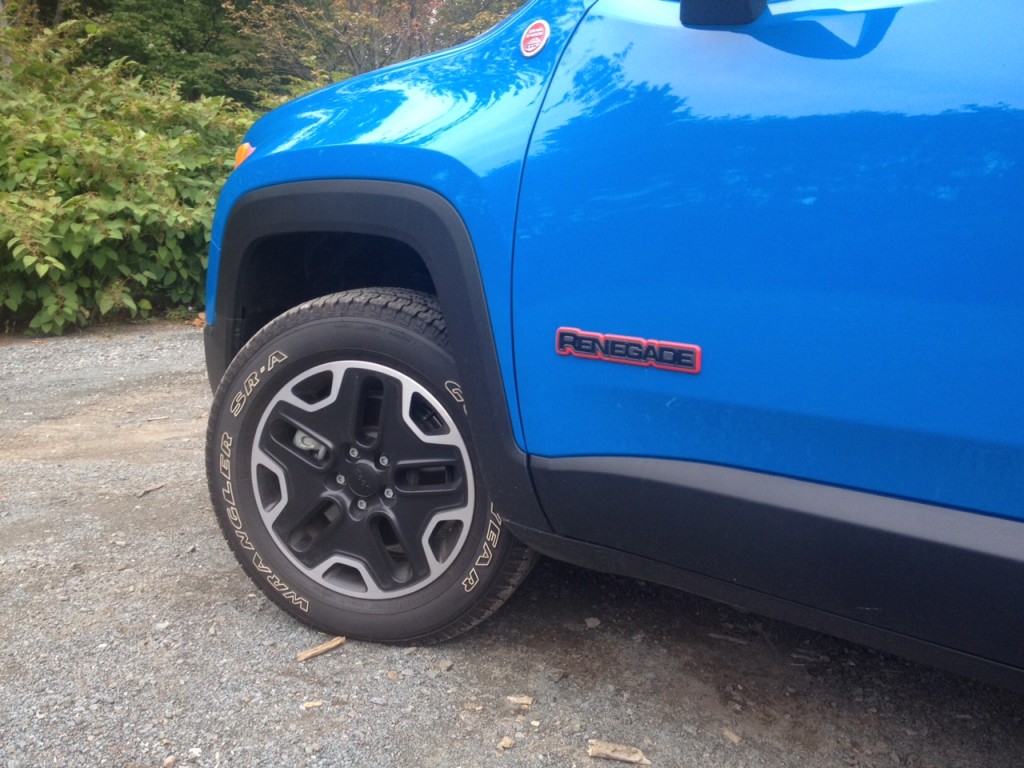 Having found a great place to try out some off-roading, I’m pleased to say that the Renegade in Trailhawk trim is indeed a star when it’s off the pavement. There wasn’t a steep grade or mud puddle too big and it was able to tackle it all in relative comfort as well. With that said, I can’t help but think the 1.4 litre turbo would be a better choice for the Trailhawk what with it’s bigger torque numbers and the availability of a manual transmission which would make off-roading easier. 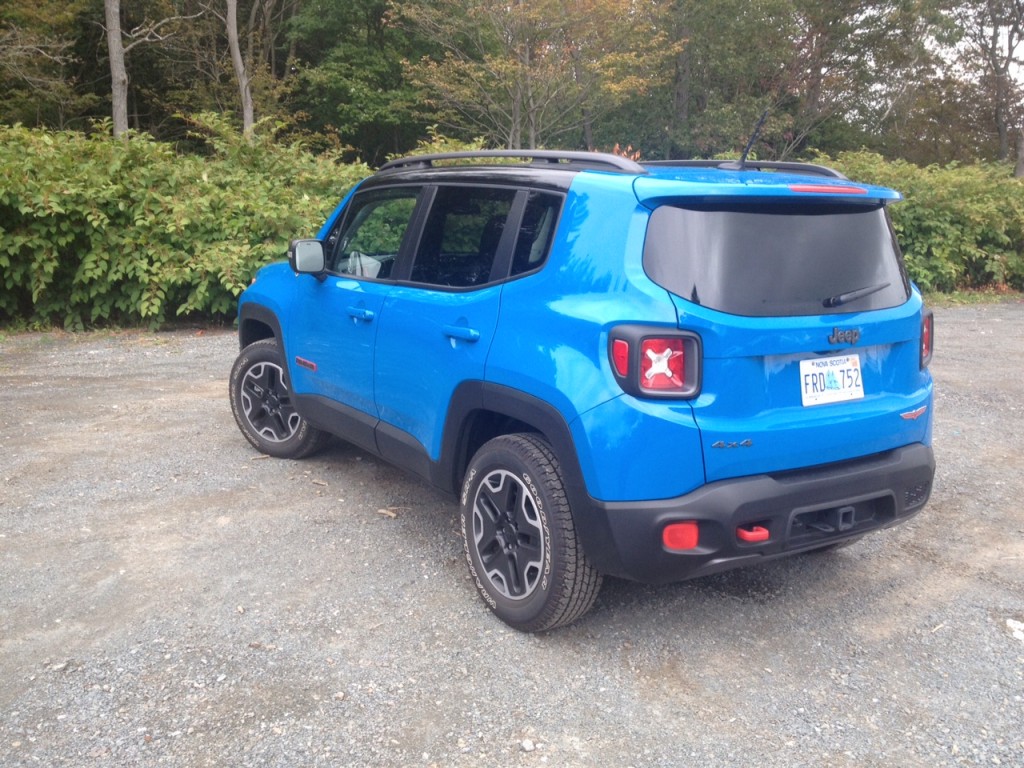 But let’s be honest, even those who select the Trailhawk trim aren’t likely to do any hardcore off roading. They just want the appearance and ability to tell their friends that they could if they wanted to.

Here’s the problem with that though. The Renegade in this trim is $40,000. Paying that kind of money for bragging rights definitely ruins any advantage the Renegade may have had with value. If you’re going to fork over 40K for a Jeep, why not just get the Jeep that defines them all? Why not get yourself the iconic Wrangler? Not only is it bigger and thus a bit more useful, but it has all the off-road capabilities you need (or all of them you need in order to brag), it has a better engine and transmission combo, it’s decidedly rugged and won’t be referred to as a Barbie Jeep.

But paying $40 grand for this Jeep? Well, that just isn’t good value. And we all know people love and expect value. 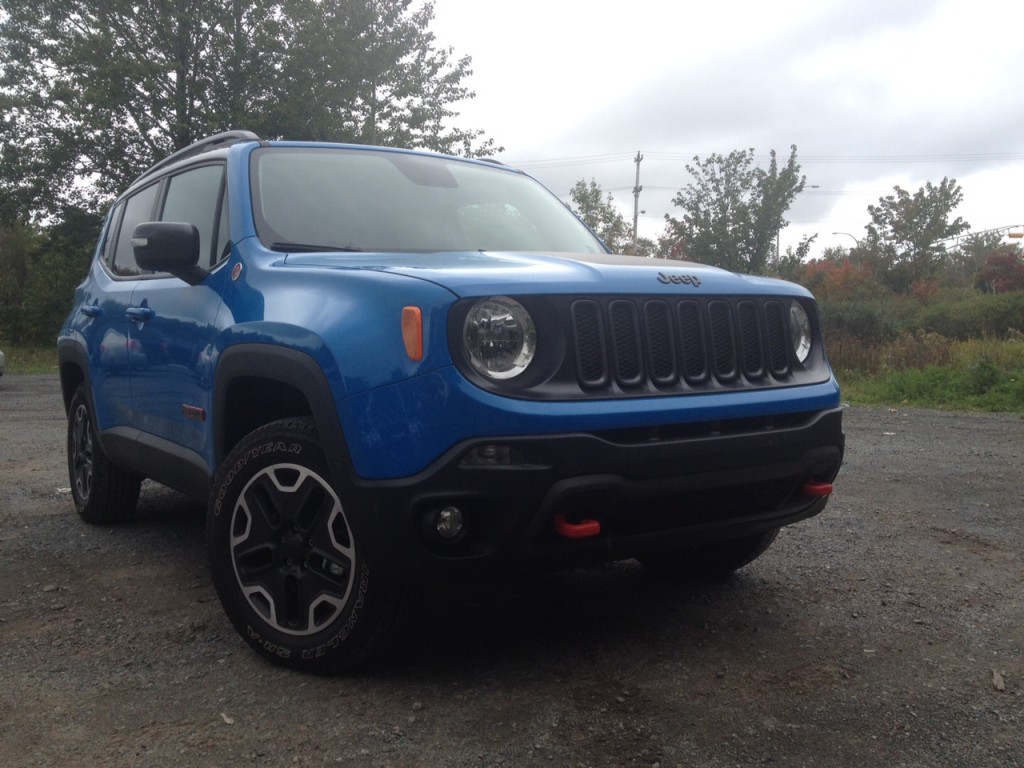