This is an SUV. You might think you’re tooling around town to your local Starbucks in an SUV but you probably aren’t. You’re probably riding around in a car complete with car underpinnings on a body which somewhat resembles that of an SUV. In other words, you’re riding around in a hatchback with a raised suspension.

It needed to be said because far too many people misuse the term to describe their crossovers. And quite frankly, it’s insulting to the SUV.

It’s a bit like McDonald’s claiming they make gourmet burgers or Bill O’Reilly claiming he’s an impartial independent. That would be insulting to our intelligence. Or perhaps it’s like buying a guitar and going around telling people that you’re Lenny Kravitz.

No, a real SUV should have the ability to go anywhere. The fact of the matter is, your crossover probably can’t.

Aside from the fact that Jeep has brand cache, there is the expectation that you’ll get real SUVs with real SUV qualities from just about any of their product.

Aside from the Wrangler, the Grand Cherokee is probably next in the Jeep family to be able to claim hardcore SUV traits. So, I took one out for the week and took it to the test. 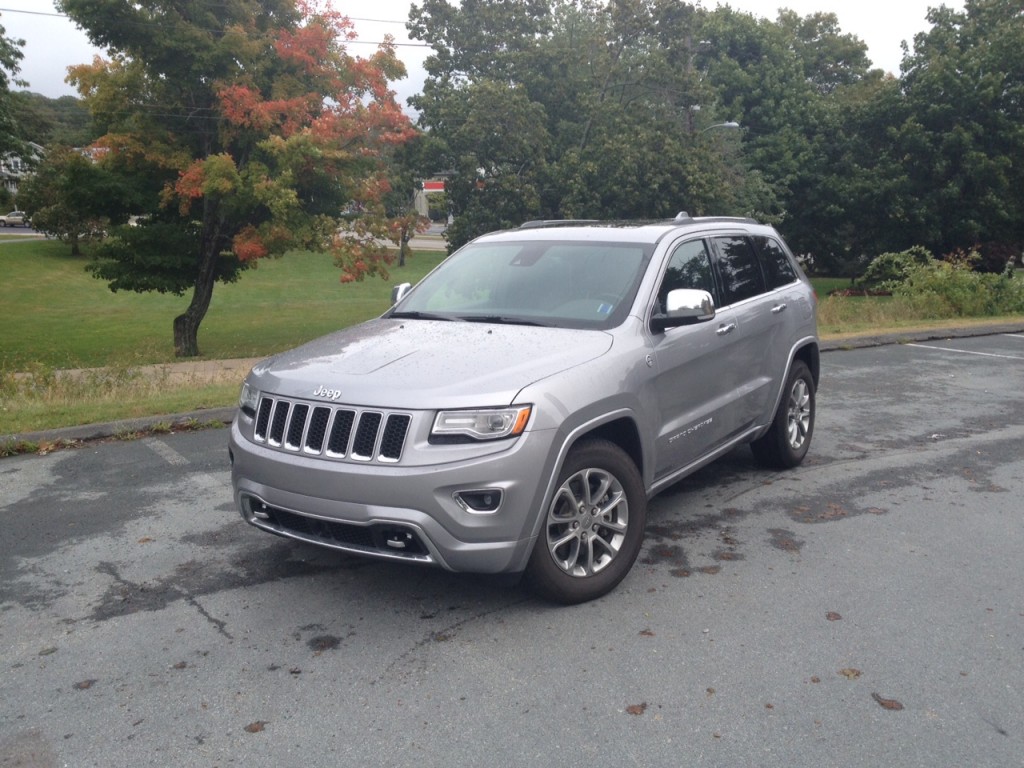 Firstly, I don’t think anyone can deny that the Grand Cherokee looks the part. And not only does it look the part, but it manages to keep its rugged looks all while offering a handsome, premium look. My particular version was the mid-trim Overland model. This nets it 20-inch wheels which to be honest don’t really fit the dapper exterior looks but to each their own, along with some chrome splashed throughout and LED daytime running lights wrapped around HID headlights. Half the reason why Jeep has so much brand recognition is because of the seven-slotted grille which the Grand Cherokee wears well. 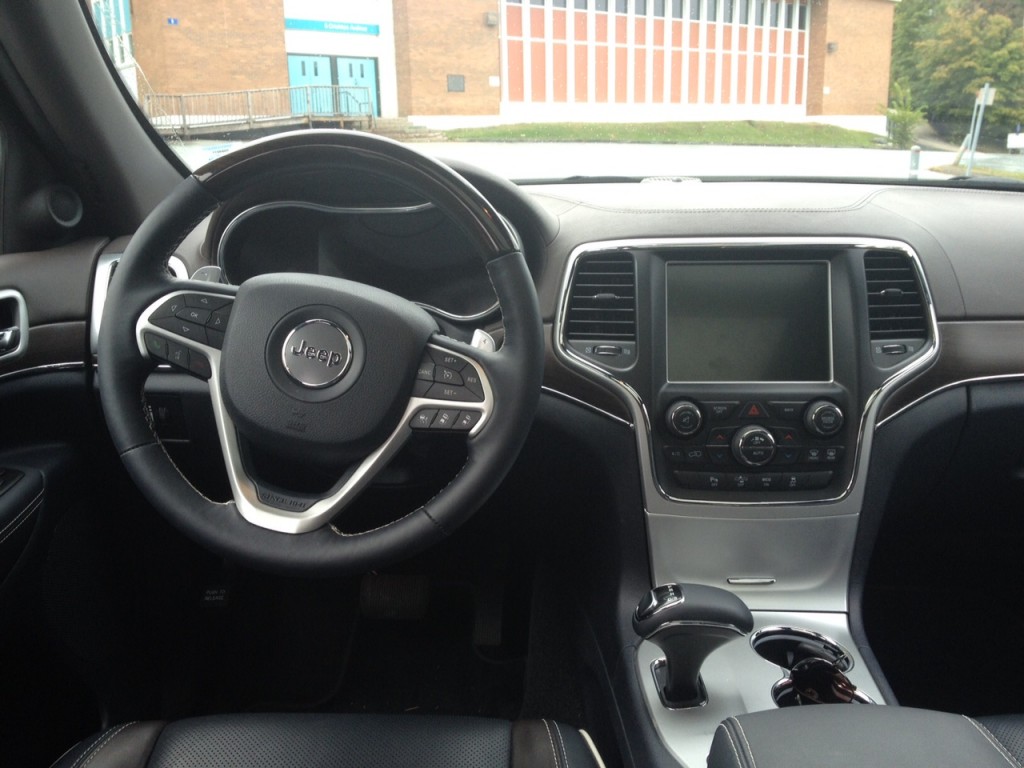 The interior is premium all the way from its design to its touch and feel. The wood on the dash looks and actually feels real and I actually didn’t mind the wood trim on the top of the steering wheel. Usually it takes some getting used to and it feels a bit gimmicky. My tester game with a massive infotainment screen sourced from Chrysler and not only is it easy to use but it actually responds to commands. The same can’t always be said for Chrysler’s new electronic T-shaped shifter. There would often be times when I wanted to throw it into reverse and it either didn’t respond or I kept overshooting it to neutral. 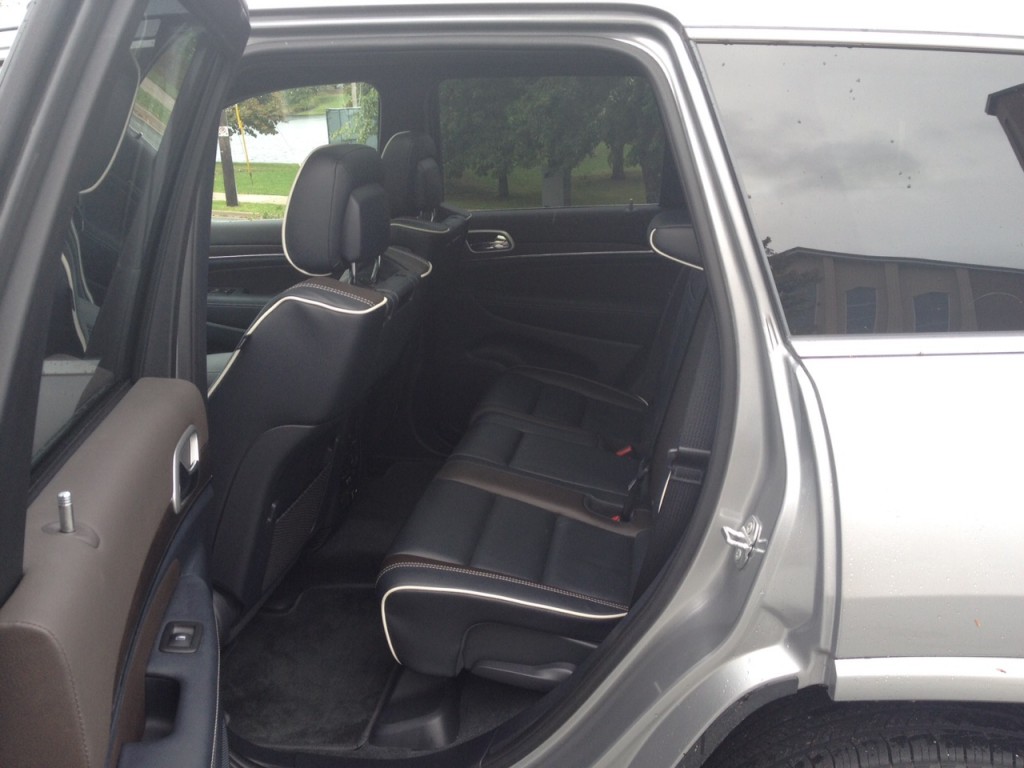 The leather seats are comfortable for long drives but they could use a bit more support. The cooled feature of the seats took a long time to kick in and even when they did, it felt more like – if I can use the term – luke cold. Luckily the cabin is as spacious as you’d expect it to be and very few people in the back seats would complain about head, knee or leg room. With the seats down, you should be able to haul just about anything including human bodies. I actually tested that one out. But before you go reporting me to the cops I’ll just explain that I took the Grand Cherokee on a camping trip with friends and being the outdoorsy type that I’m not, I don’t own a tent. My friends all had one or two people tents only so at least they were spared of my incessant snoring. But then it hit me: I’ll just sleep in the Jeep! And so I did. With little effort making the rear seats flat thanks to the touch of a button, I set up my bed and spent the night in it. And not only did I comfortably fit, I actually ended up having a fairly decent sleep. I asked some friends to hop in to see how many people we could fit in at once and two would be realistic but you could do three in a pinch. 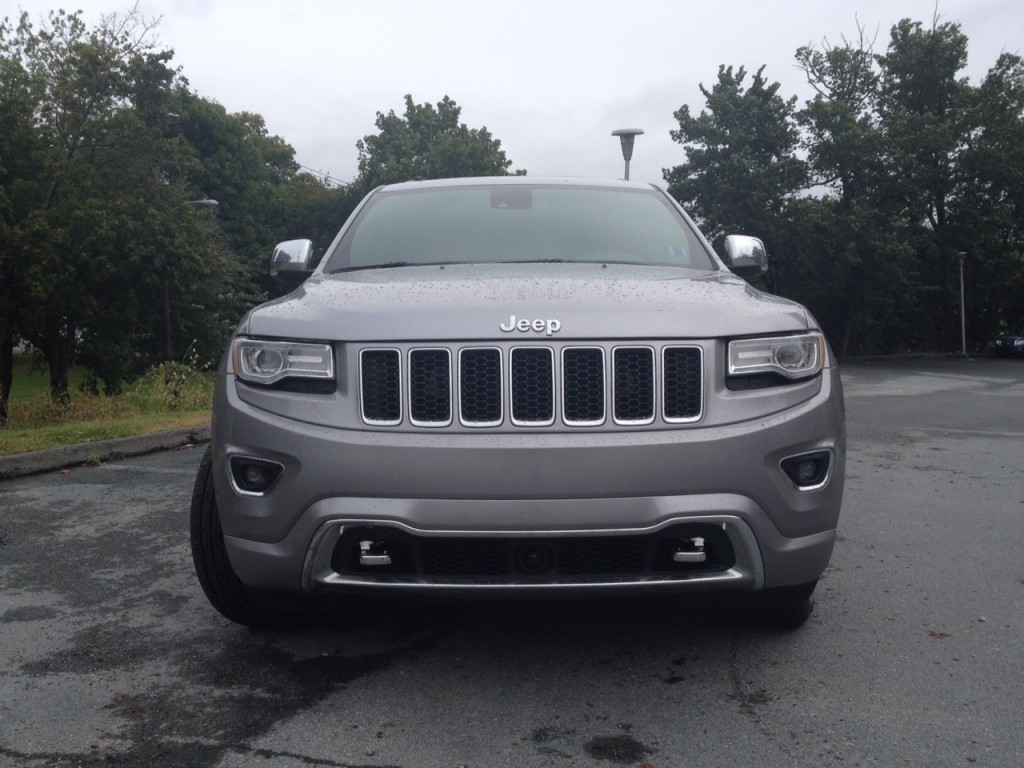 With the Grand Cherokee lineup you have a lot of engine options to choose from. My tester was equipped with the 3.0 litre V6 Ecodiesel which was good enough for 240 horsepower and a whopping 420 pound feet of torque. This is a gem of an engine with the power you need to catapult past snail paced drivers and being a diesel, the efficiency that could make most mid-size sedans blush with embarrassment. The only issue I noticed is that this diesel, unlike most modern diesels was a bit noisy. The typical diesel clatter could clearly be heard from the outside at idle but it also made its way into the cabin at times. This isn’t necessarily a huge problem considering the Grand Cherokee’s ruggedness in general, but it also doesn’t really go with the $71K price tag and lavish cabin. That said, in general, it is a refined engine that does the trick without much fuss. The engine is mated to an 8-speed automatic which works in tandem with the engine brilliantly. I’m usually the type that insists no car should realistically have more than seven speeds but I did end up reaching the 8th gear without much fuss on the highway down to the campsite. Shifts are decisive and smooth. 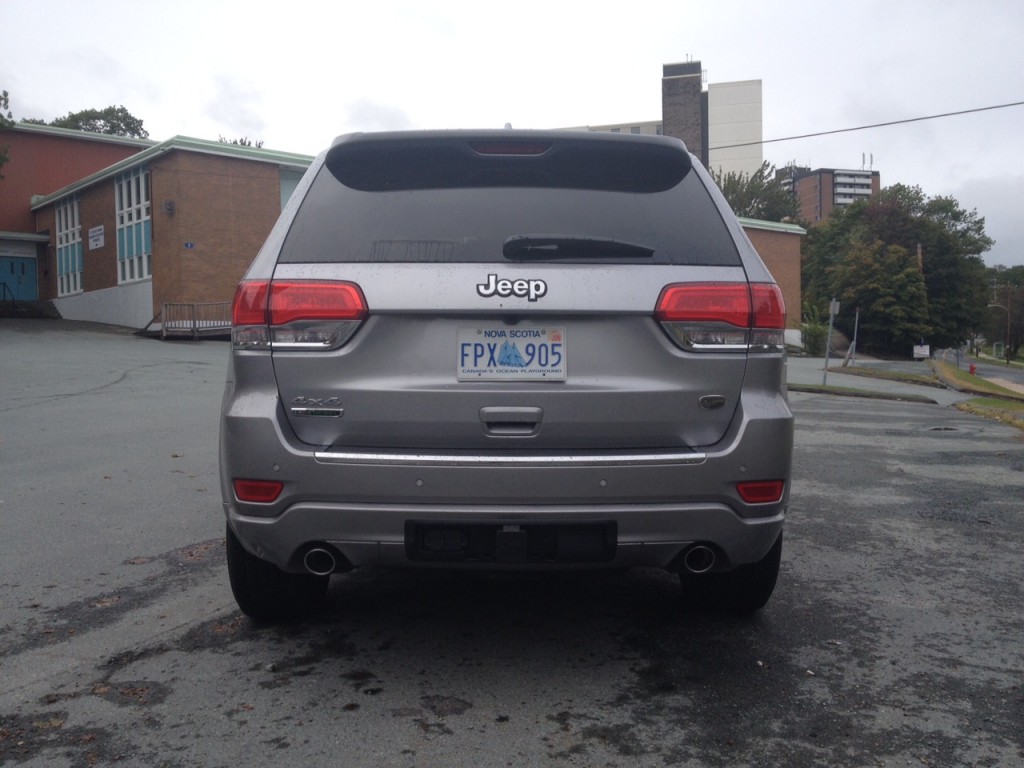 You could also describe the ride as fairly smooth too, it doesn’t have the typical harshness of SUVs and that could be attributed to the air suspension which has the ability to lower and raise itself based on driving conditions. You also have the ability to manually raise and lower it yourself, just not while driving. Regardless, the Grand Cherokee soaks up bumps and potholes with ease which is impressive. 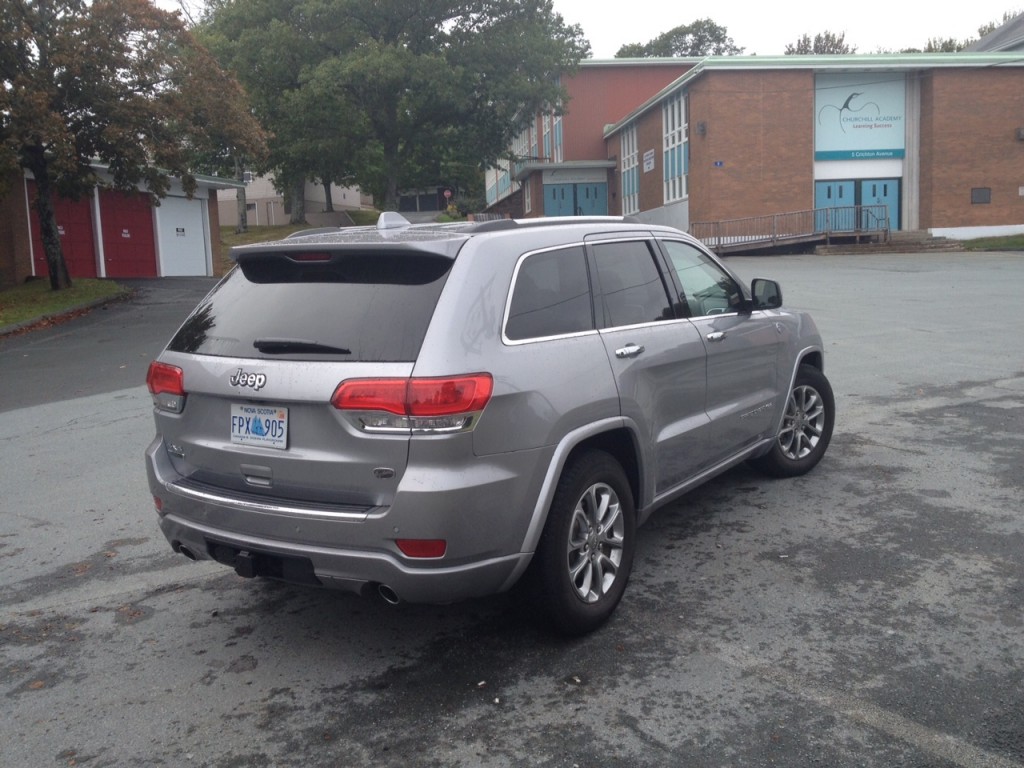 But not as impressive as its off-road prowess is. A couple of buddies and I decided to do some proper off-roading, and I mean proper off-roading to see if the Grand Cherokee really deserves the Jeep badge. In short, it does. A lot. Not only are you able to spec out the Jeep’s capabilities manually, but if you’re the sort that doesn’t know when to properly use 4WD low, for instance, there’s actually five modes you can choose from which will allow the Grand Cherokee to take care of the rest. You can choose pavement mode, sand mode, snow mode, mud mode or rock mode. The only mode I didn’t get to try was snow mode and I was happy about that since I hate snow, but considering how well it tackled every other mode (especially rock mode) I have absolute confidence that it would be hard to get this thing stuck in the snow. In the appropriate mode, you can make it do just about anything. It has great approach and departure angles which actually allowed us to do some three-wheeling. The 4WD system also didn’t seem to care that we were tilted on three wheels as it got us back on all four as easily as pouring yourself a glass of milk. 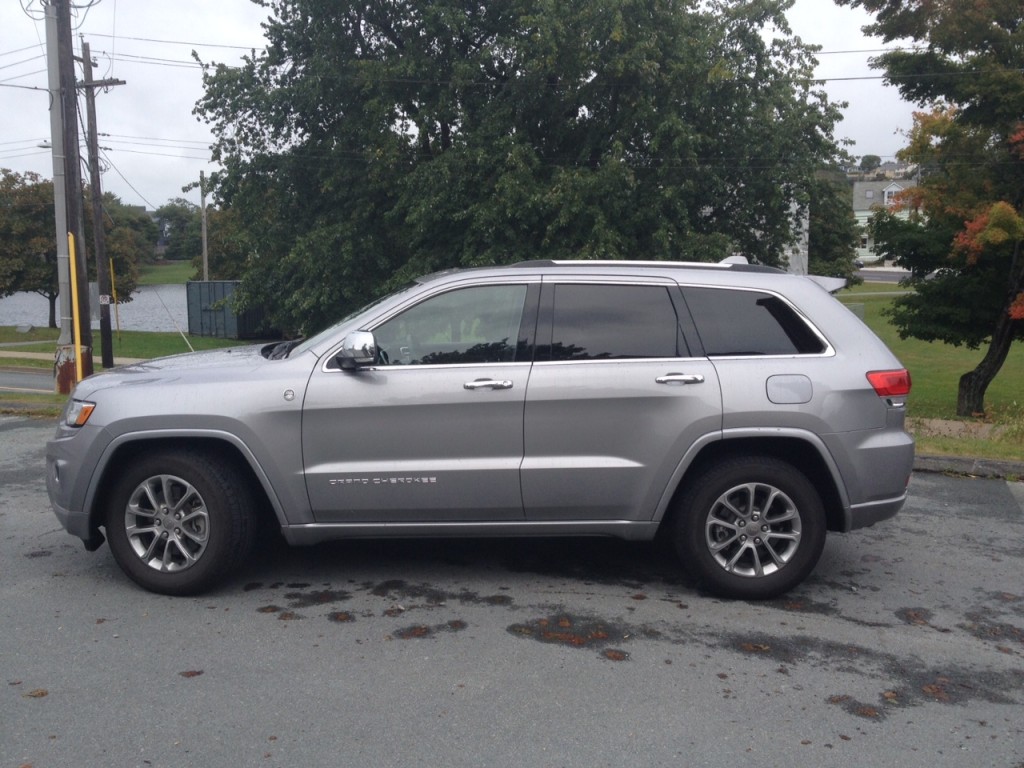 This is all fantastic, but as I alluded to, being a true SUV isn’t really the Grand Cherokee’s party piece. It’s the engine again. Not only is it refined and powerful, it actually does do relatively well with fuel consumption. Officially rated at 11.2 L/100 kms city and 8.4 L/100 kms highway, I was able to return a real world driving figure of 9.0 L/100 kms in mixed driving. Considering this porker weighs a whopping 5,400 pounds that is indeed the icing on the cake. 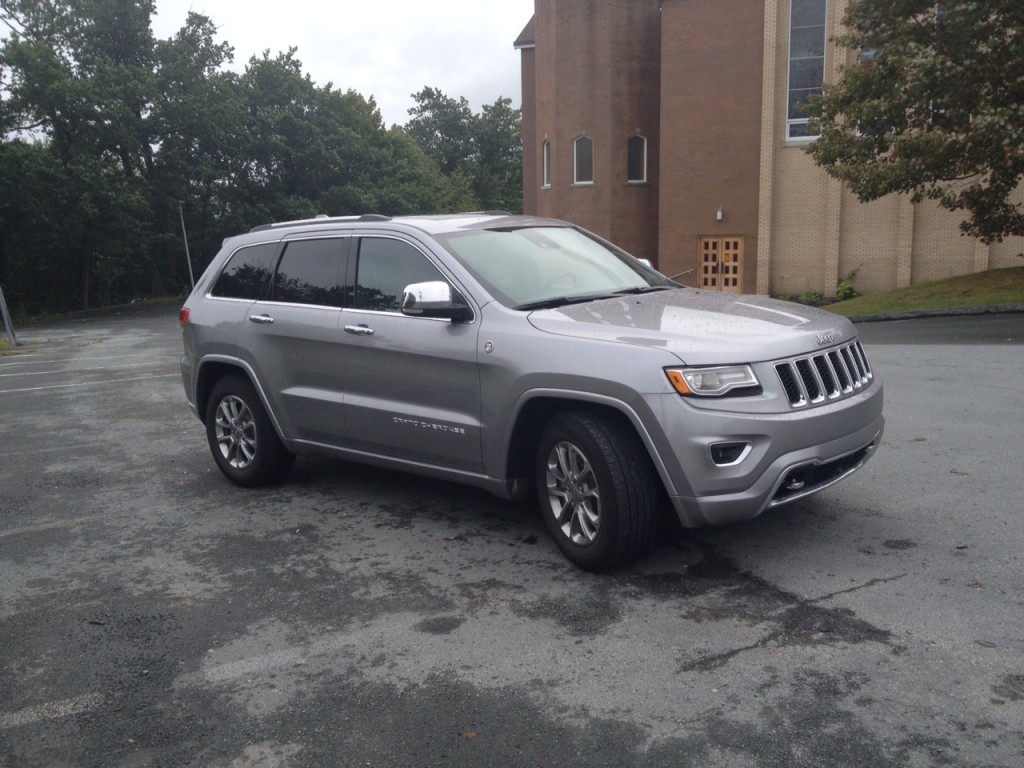 Take a minute to look at the SUV imposter in your driveway and ask yourself if it can literally tackle any road without fuss and pass other drivers like a BMW M car all while delivering mid-size sedan levels of efficiency. Then I want you to ask yourself if you’re actually driving a true SUV. Because the Grand Cherokee is proof that you aren’t. And not only that, it’s probably more efficient to boot. Now don’t you feel like you’ve been sold a ‘gourmet burger’ from McDonalds? 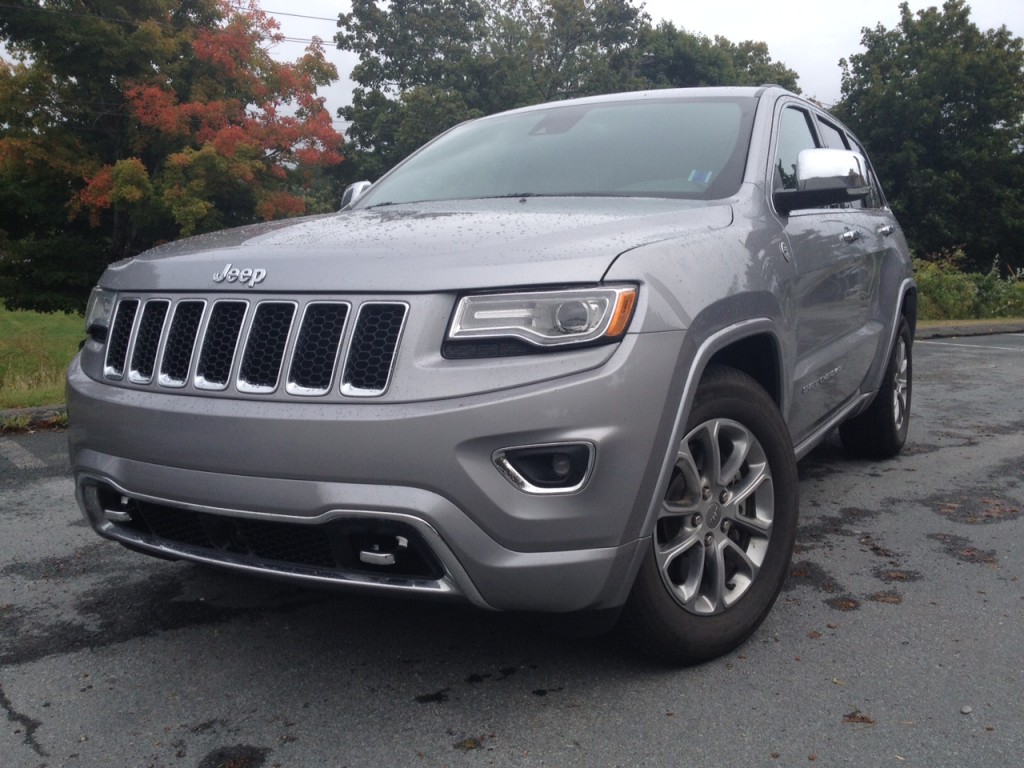