I was recently asked which press car that I’ve had out of my five years of automotive journalism was my favourite. I used to say the Volvo S60 R-Design, but now I think I have a new favourite.

So, I’m just going to cut to the chase for this one. The Cadillac CTS V-sport is brilliant. Period.

Thing is, I’m sure GM wouldn’t appreciate a one-liner as a review, as praise-worthy as it is and I’m sure you, the reader, did not click on this link for a one-liner either, so I’ll offer more evidence as to why the CTS V-Sport is brilliant. 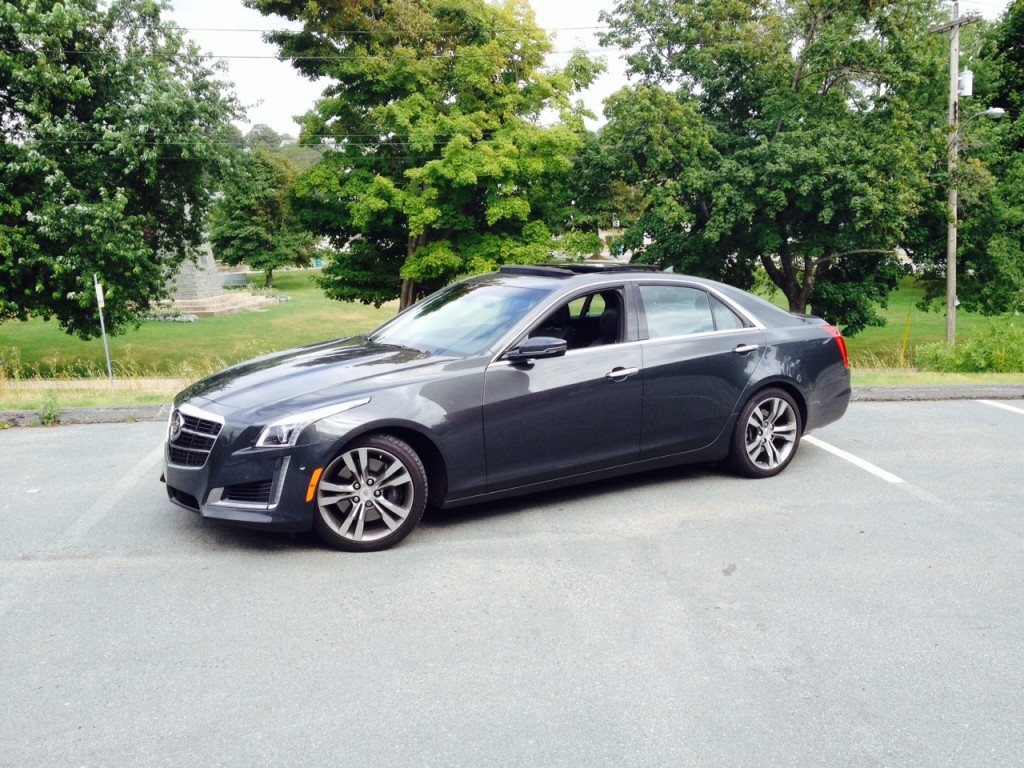 Firstly, let’s start with looks. I love that Cadillac decided not to go with the flow by adding massive 20 inch wheels to the (for now) top of the line trim level. In fact, it comes with a mere 18 inches standard and while they do seem a tad on the small side at first glance, I definitely warmed up to how well they fit the car’s overall proportions. While the car itself can look a little chunky from most angles, overall this recent redesign hits the mark on the head. It’s the best looking CTS by far (which, admittedly, wasn;t hard to achieve considering the designs first two generations) but I’d even go as far as to suggest that this is the best looking model in Cadillac’s current portfolio. The ‘Art & Science” design language is still there keeping the corporate look in tact but it has been noticeable softened creating a much more agreeable and less divisive design. The front end with its cool LED daytime running lights and subsequent LED turn signals really gives it some road presence along with a lowered nose and big grille. 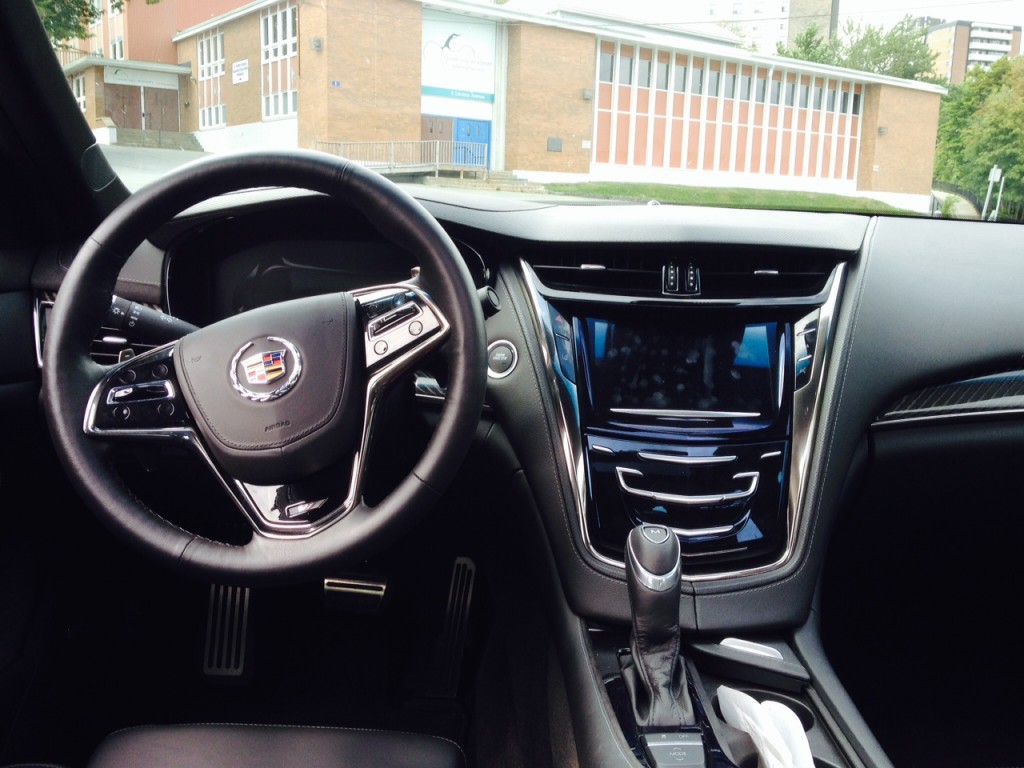 Inside, I’m pleased to say, is a very nice place to be. The overall cabin design looks elegant yet performance oriented. The centre stack is well arranged with its glossy black trim but the buttons are a bit difficult to use since they are not conventional. My girlfriend preferred having a regular dial for the volume controls for instance. I got by using the buttons on the steering wheel, but I agree. With that said it’s something that you do eventually get used to. 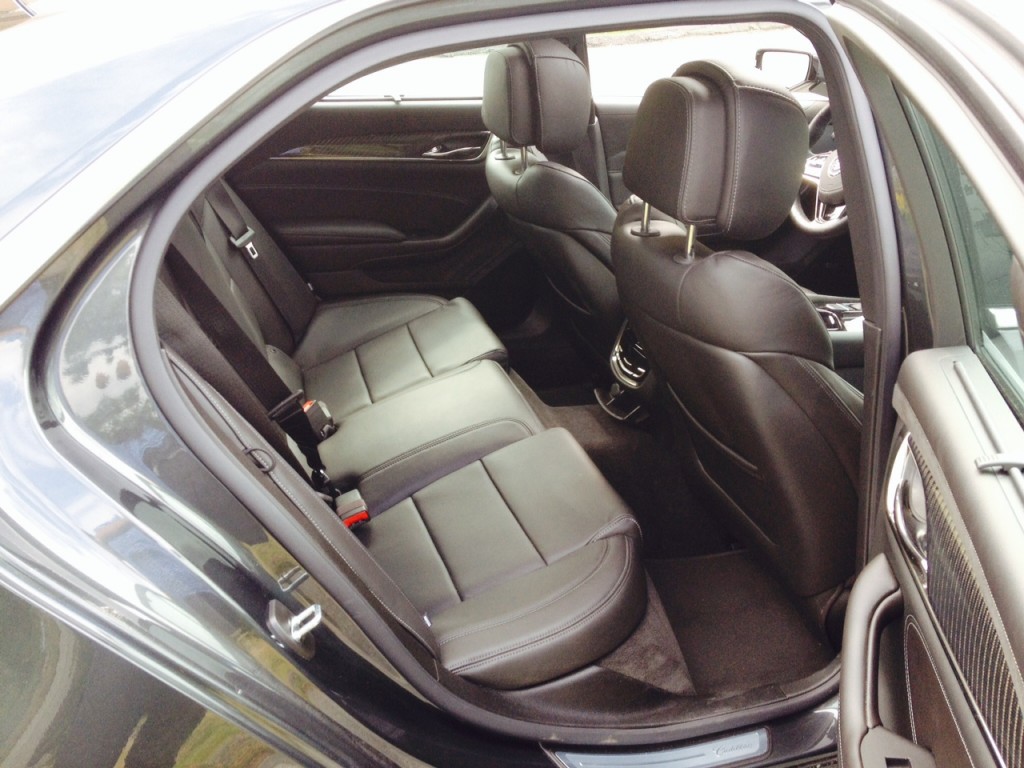 The same goes for Cadillac’s CUE system which isn’t the easiest to navigate and response times are slow but again, considering what this car is capable of, this is something I could easily live with. 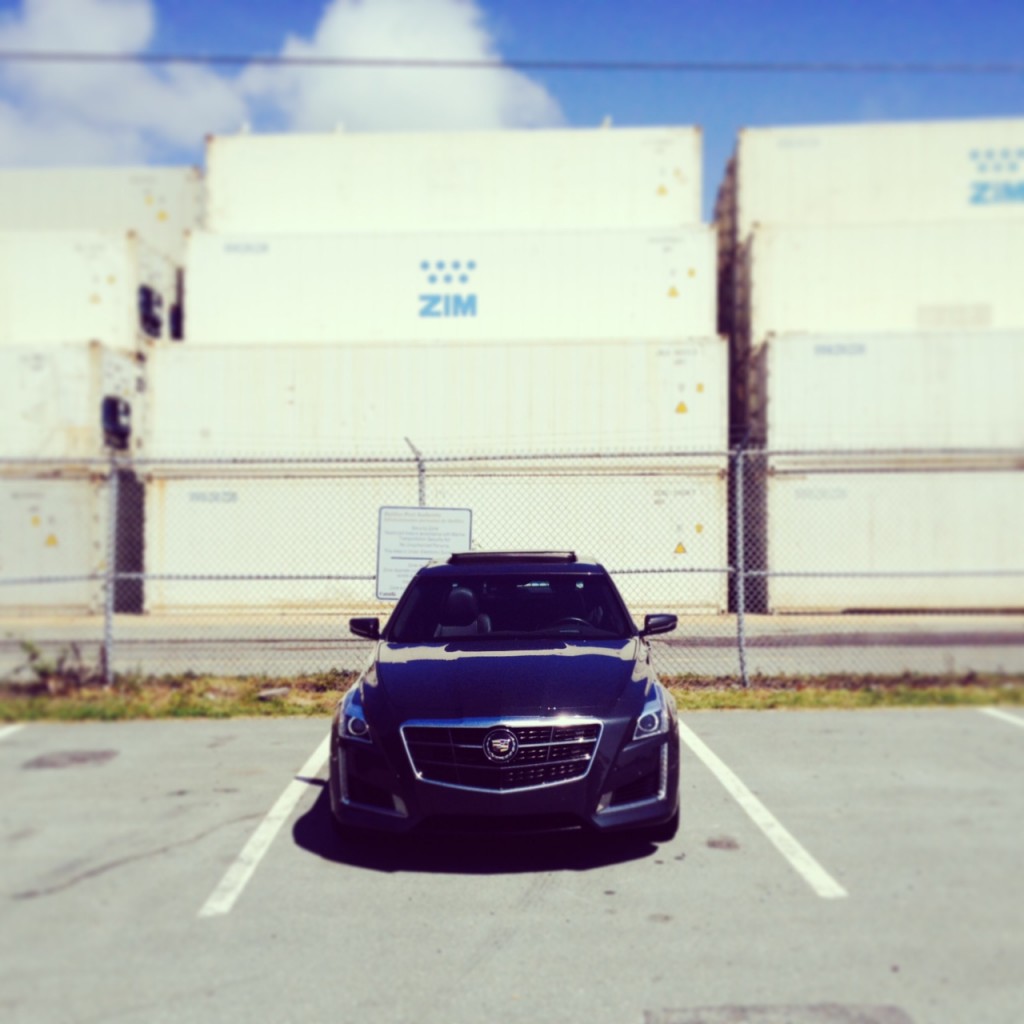 The seats are quite good at making you feel loved in corners as is the seat belts which tighten to bear-hug-levels when your body suddenly gives you a boost in testosterone and you take a corner as quickly as possible. The wheel is thick and is a decent size but it could be a bit smaller. No matter, it still provides excellent feedback to the driver. Normally I don’t like the steering to change feel based on the type of driving (the steering gets fairly light in parking lots for instance) but this system works and it works well. Turn ins are quick and crisp when you need them to be and easy when you don’t. The accuracy of the steering is spot on. 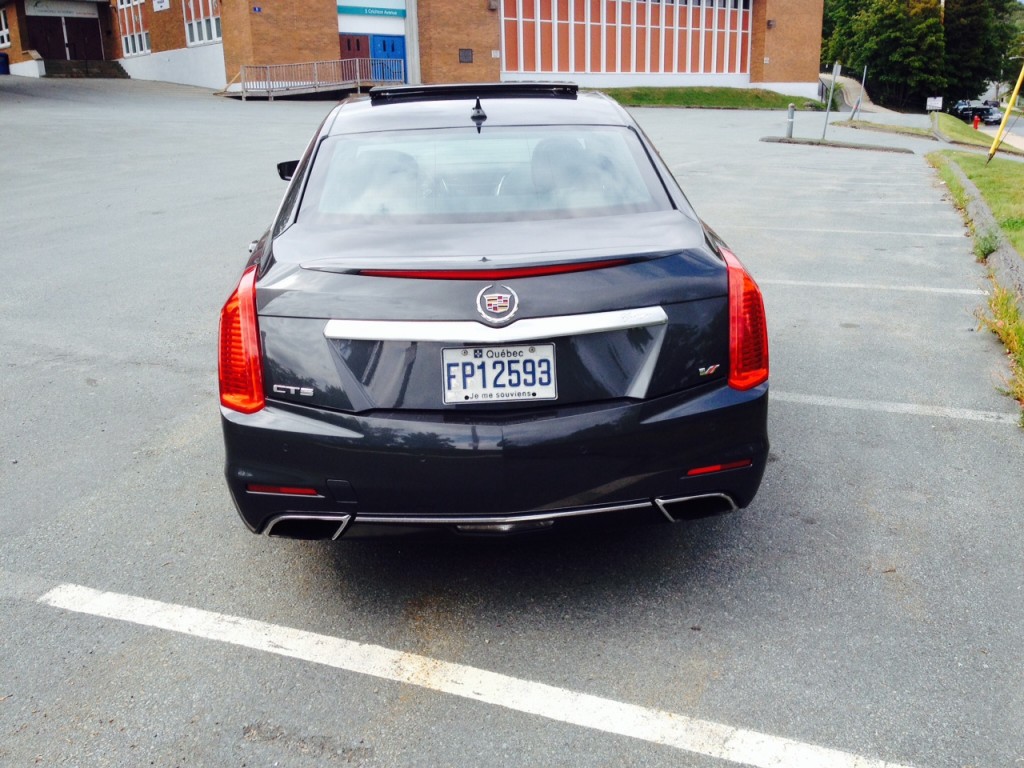 I’m not quite sure why every automaker insists on attaching their paddles to the steering wheel. They should be attached to the column where they remain stationary. That way they are exactly where you left them when it’s time to shift while cornering. Mitsubishi, of all mainstream car companies, seems to be the only one that gets it. And no, I’m not going to harp about the CTS V-sport not coming with a manual. If you don’t know my thoughts on manual transmissions by now, then you’ve just got to go ahead and read pretty much every single review I’ve ever written. 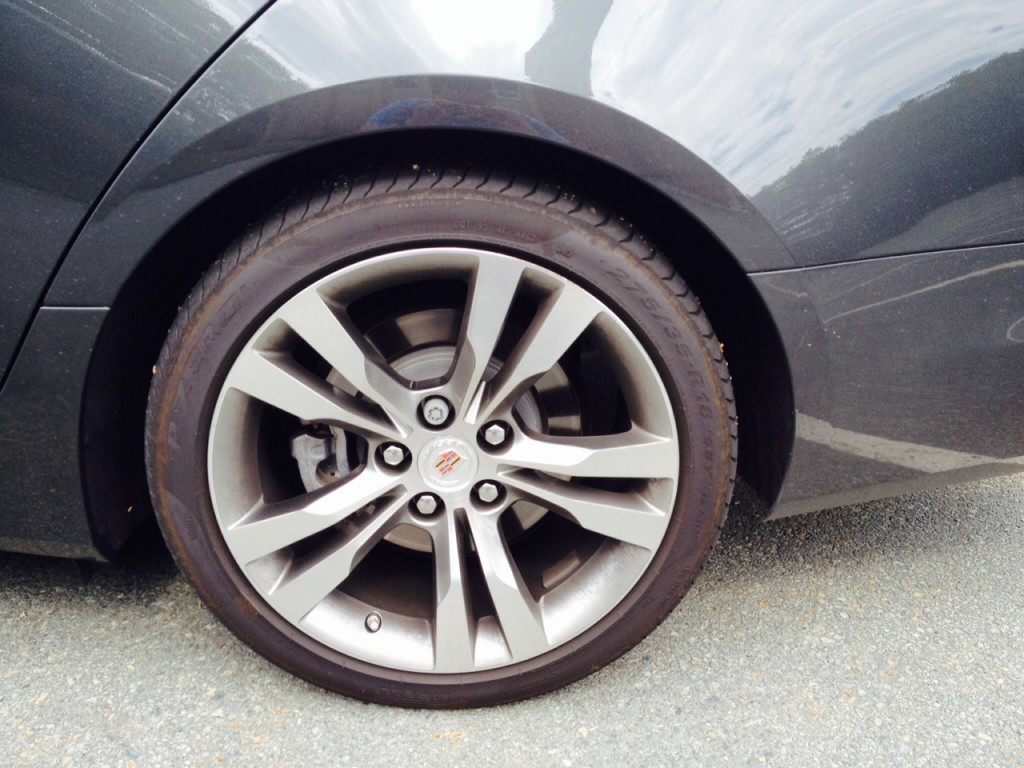 But, truthfully, you won’t care about the paddle placement once you get in and get going and it’s mostly due to one hell of a growl that greets you as you start the CTS up. That’s the exhaust note from the 3.6 litre twin-turbocharged (yes, you read that correctly) V6 which makes a whopping 420 horsepower with 430 pound foot torque. You don’t need me to tell you this is a fast car, but there really are no words to describe the intense speed this thing can achieve. That wonderful set up is mated to an 8-speed automatic which also does the job nicely. Gear shifts, whether it be from the paddles or the shift knob, are quick and it also matches the revs when you downshift making for more intoxicating noise which leaves you feening for more. In fact, I would do it at every chance I could get, opting to listen to that rather than the already decent sounding radio. This would generate stares from pedestrians which suggested I was being a bit obnoxious, but trust me, you won’t care. 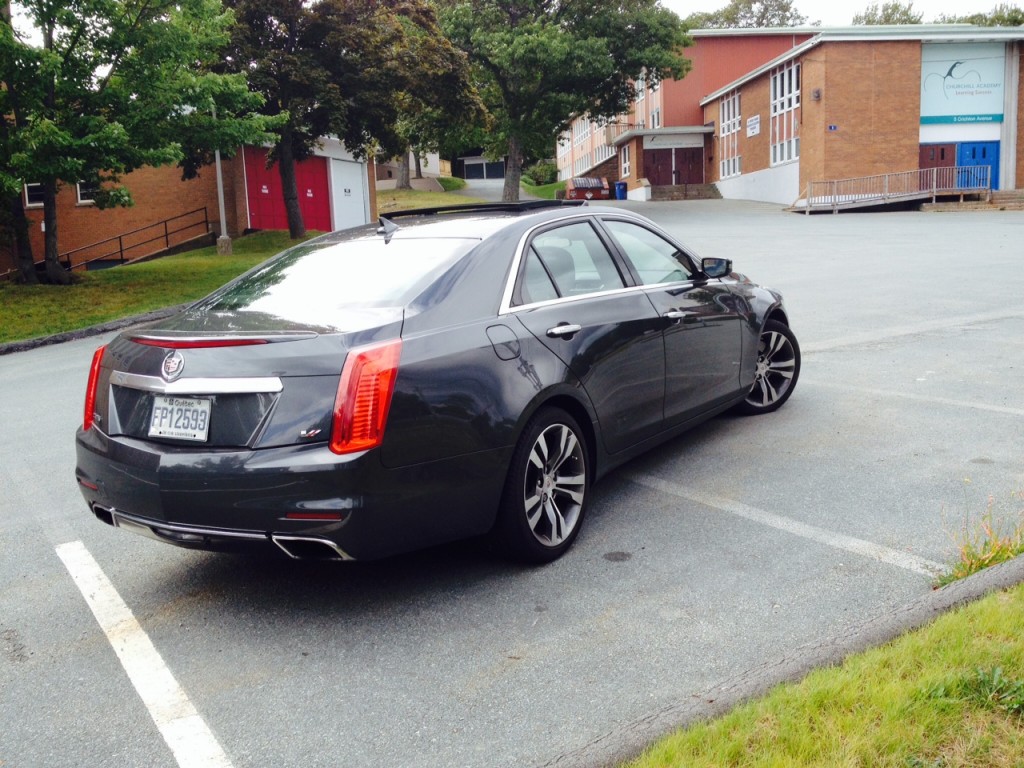 The CTS comes with four modes: touring, sport, track and snow mode. I obviously didn’t get the chance to try the latter but, surprisingly, the least performance oriented mode was actually a good performer. There would be times that I would be in touring mode (it defaults to this mode every time you turn the car on, unfortunately) and I wouldn’t even realize it. The performance in touring mode is still that good. It isn’t until you hit track mode when you realize that, yes, this thing can somehow actually get better. 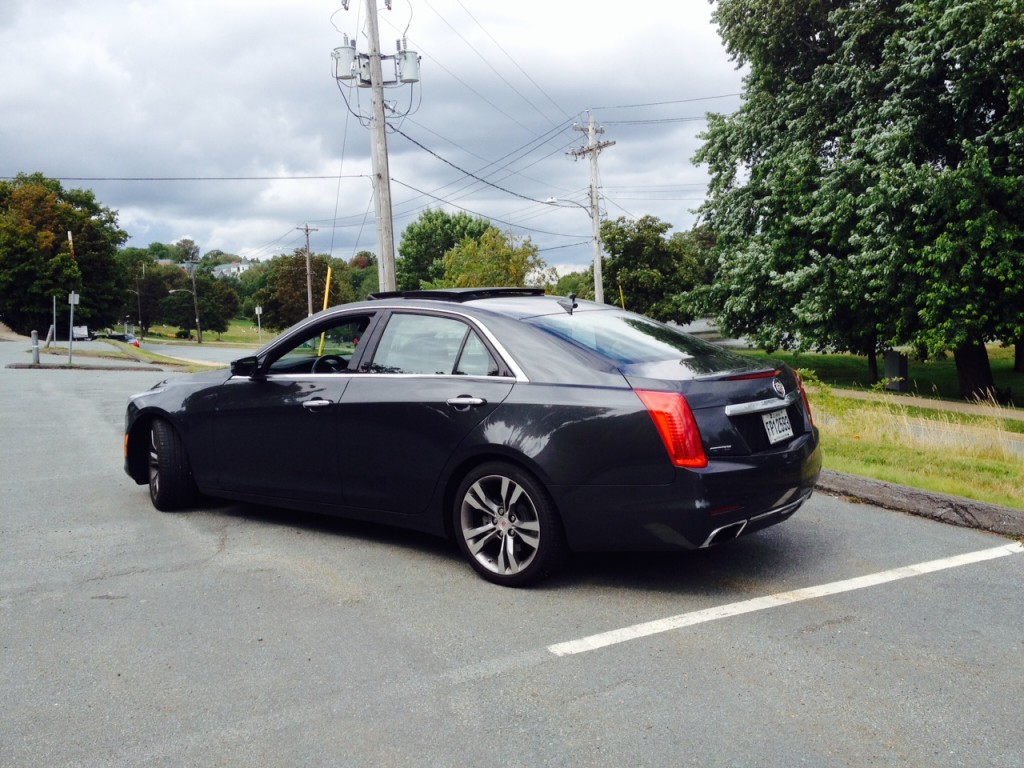 As good as the straight line performance and exhaust note is on this car, its hidden party piece is truly its handling abilities. Make no mistake, the CTS is a big car. But it certainly doesn’t feel it. You can toss it around with ease and I truly mean that. I’m not even sure if the CTS V-Sport has 50/50 weight distribution but it certainly feels it. Handling is sublime. It’s where the BMW 5-series used to be, and I say used to be because the current version isn’t as good as the CTS V-Sport, and that’s coming from a die hard BMW fan. In fact, I’d even wager to say that the CTS V-Sport is as good or better than its German rivals at feeling planted, solid, sporty, fun, luxury-oriented and just plain perfect. 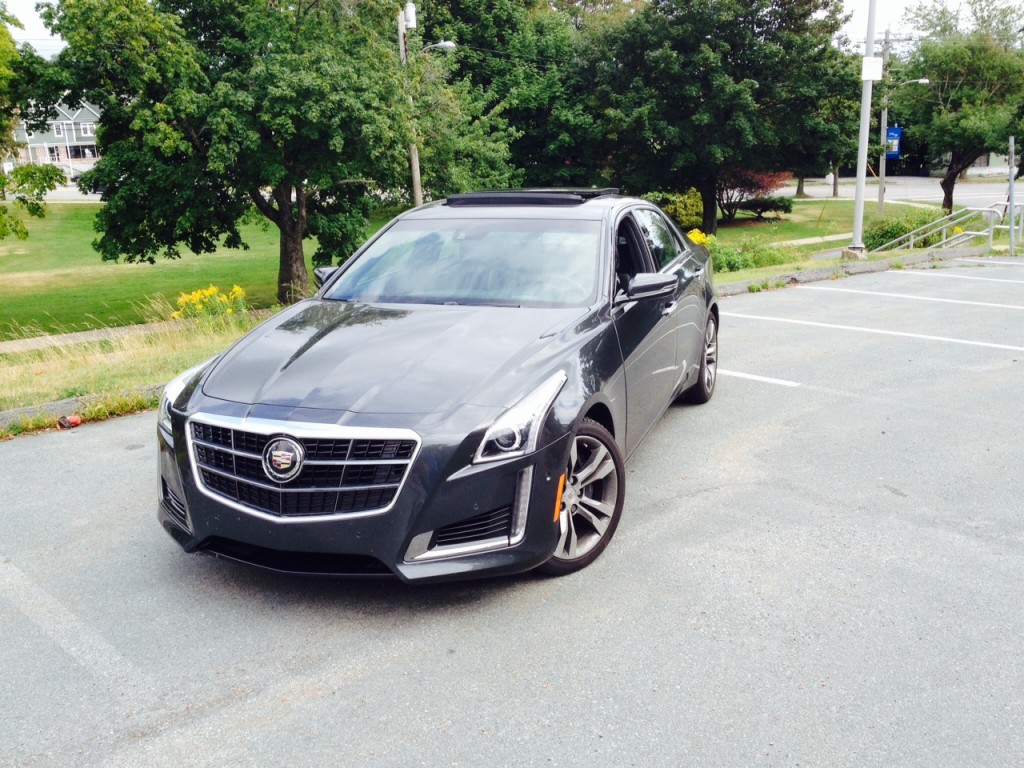 And that’s truly all there is to be said. Do your libido a favour and take one for a test drive. Now.