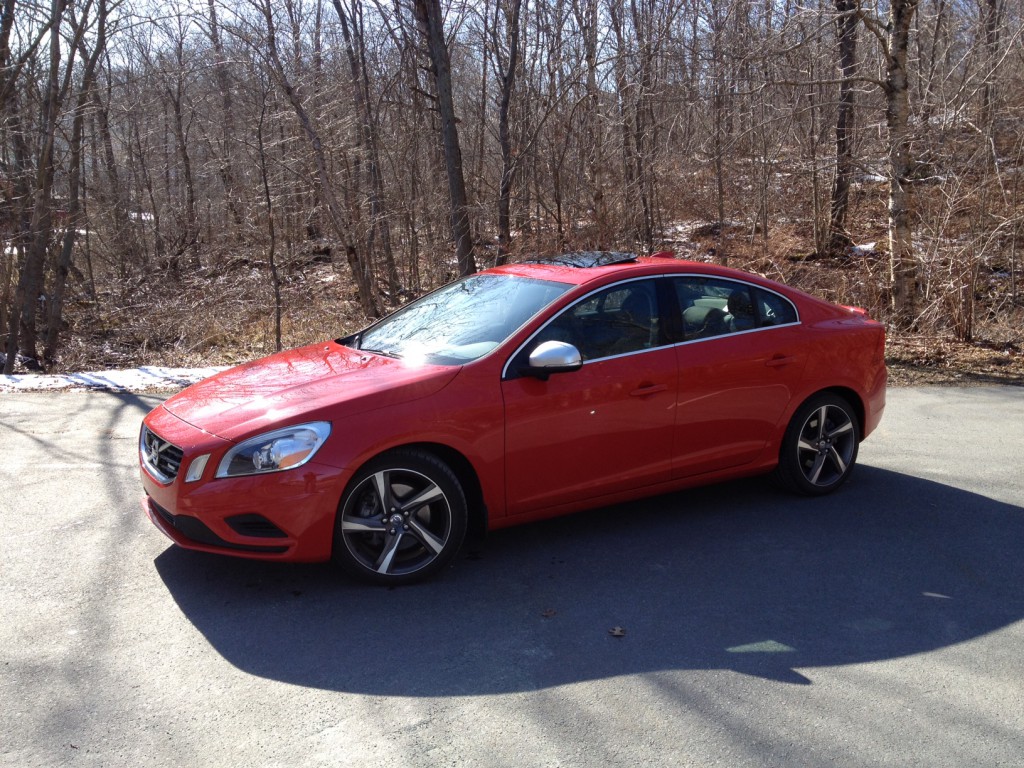 You may or may not remember my review of the 2010 Volvo XC60. I commenced by blasting my fellow auto journo colleagues for stating in every single one of their Volvo reviews that Volvos are not boxy anymore and that they’ve now injected some style. I was annoyed with that because it’s a bit like stating that Sir John A. MacDonald is not our Prime Minister anymore. It sort of goes without saying at this point. Volvo deviated from the traditional boxy design over two decades ago now. Let’s move on.

With all that said, my colleagues’ obsession with mentioning Volvo’s boxy styling of the past could very well be justified because the public still perceives Volvos as the same shape as their fridge. Volvo is well aware of their boxy past and desperately wants to change public perception. You’ll now notice that the Volvo symbol has grown in size and on the back of all new Volvos the name is spelled out in large letters separated by large spaces in order to really garner some attention to the fact that yes, that shapely car is indeed a Volvo. In fact the goal is to get that classic reaction of “THAT’S a Volvo?!” matched with a look of shock, followed by admiration. It’s a marketing/PR wet dream.

Well that strategy appears to be working. When I took the newly redesigned S60 in R-Design guise to the office of my day job, I caught my fellow colleagues peering out the window with audible whispers of “what kind of car is that?” When I announced that it was a Volvo, the above mentioned reaction happened with even more dumbfounded looks than I anticipated.

But here’s the thing. While Volvo may get its jollies by shocking people with the seemingly unnoticed beauty of its entire model lineup, they really seem to be pushing the shock envelop with something else: performance. Volvo’s joint venture with tuning company Polestar turned a regular C30 into a “junior Nissan GT-R” and there are rumblings of Polestar becoming Volvo’s official in house tuning company to compete with the likes of BMW’s M division and Mercedes-Benz’s AMG division.

Indeed, the biggest and most animated reaction from my office colleagues was when I mentioned that this particular Volvo developed 325 horsepower. Like a children’s cartoon, their jaws dropped to the floor.

This really set the tone for Volvo’s “Naughty” campaign with the mid-range S60 which highlighted just how much the S60 could be flogged about a track, but the R-Design promises to be even naughtier. I tested one to find out. 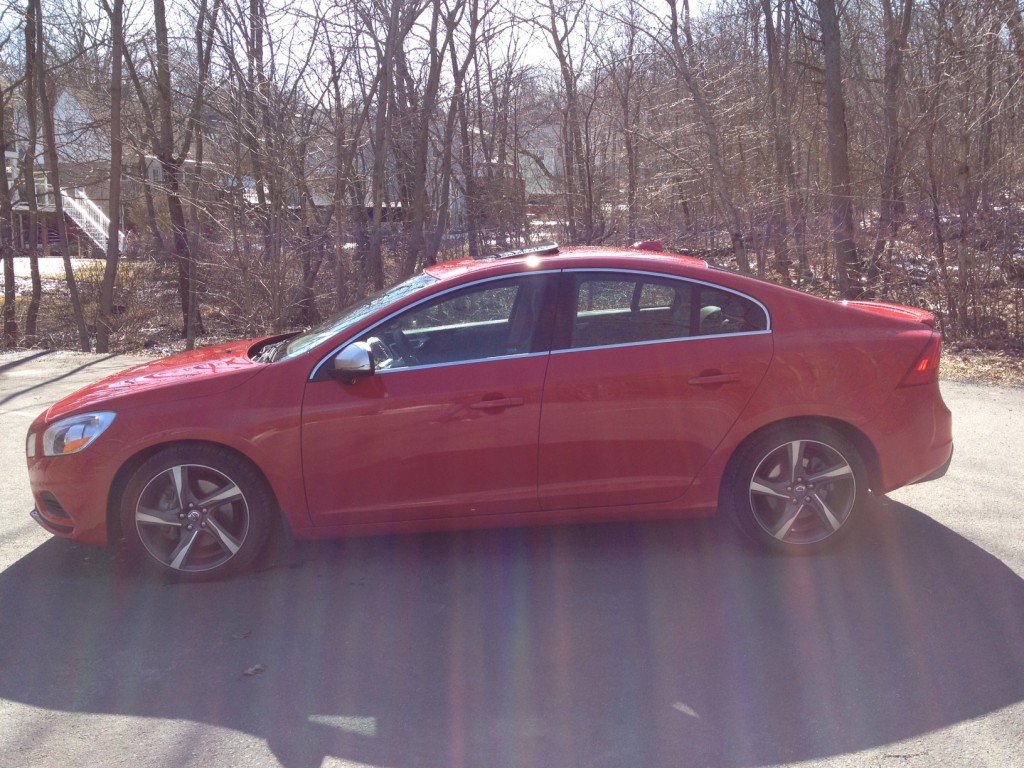 While hearing about Volvo’s boxy past all the time may irritate me, the exterior design of the new S60 absolutely does not. It’s achingly gorgeous. I honestly tried to find fault with the design, but I just can’t. Everything from the bugling styled hood, with aggressive front fascia, to the sleek and curvaceous profile, to the eye-catching 18 inch wheels on low profile tires to the beautifully styled tail lights with rear diffuser and dual exhaust. It all comes together perfectly much in the same way Beyoncé does. My tester’s bright red paint helped to generate some stares of revere, although I must admit, that colour is a bit much for me (though it did grow on me throughout the week). 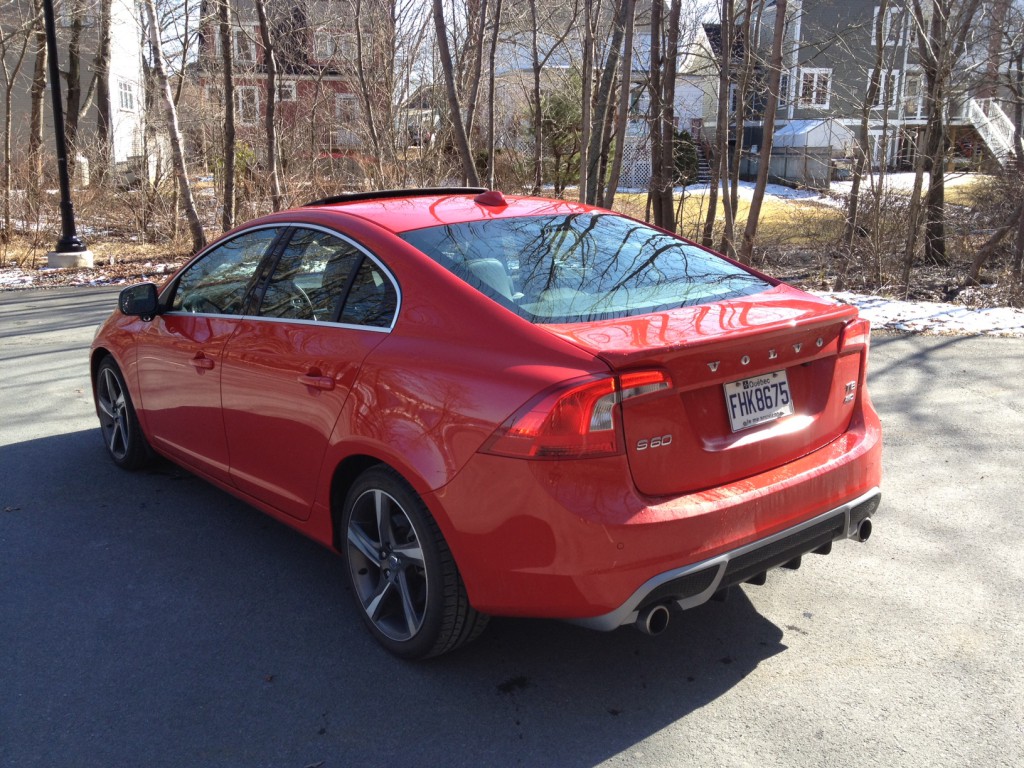 The interior is a bit more sedated than the exterior style, although it remains an attractive layout. I love the dark blue touches on the speedometer and tachometer, which by the way, are incredibly easy to read with big bright conservative numbers, and I’m also a fan of the ‘waterfall’ style centre stack. It essentially creates an illusion of floatation, but is also functional to put change, sunglasses or CD’s behind it (do people still listen to CD’s?). Rear seat legroom is tight as is headroom with that sloping roofline, but most people would feel comfortable for shorter trips, not to mention the seats alone are worth the neck cramp. I wonder if Volvo, a name traditionally associated with safety, is aware that making seats this comfortable could be considered a safety hazard? I know it’s been said again and again, but it’s true; Volvo makes the most comfortable seats in the business. They’re so comfortable that if the driver isn’t careful he or she could easily take a nap. 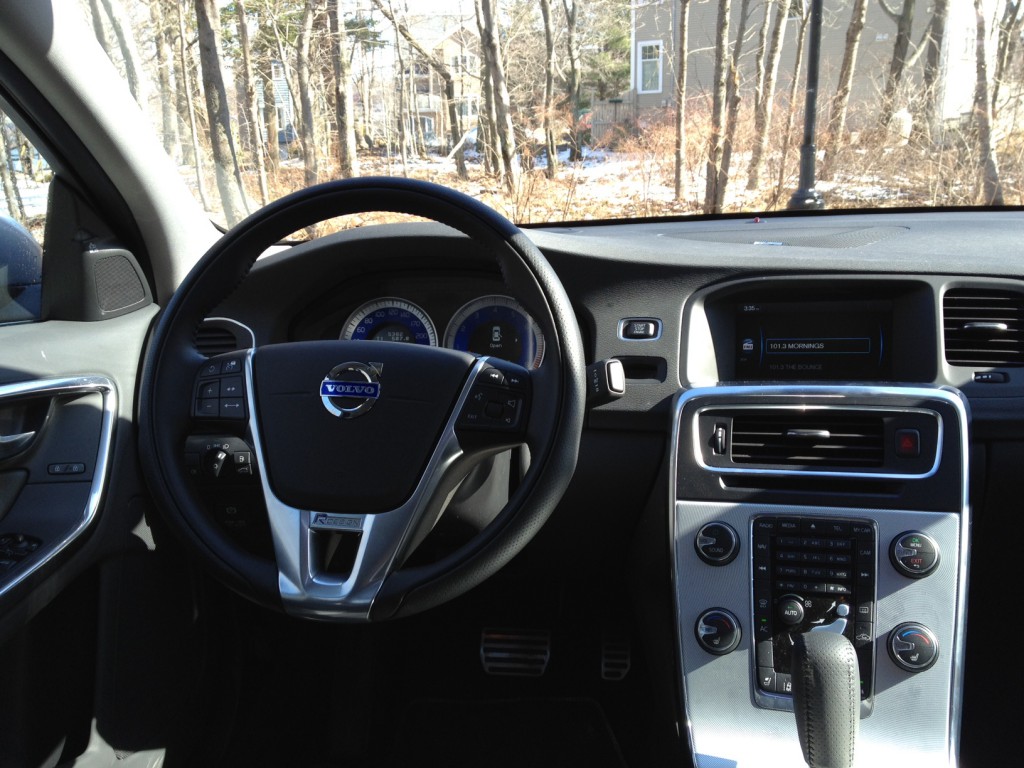 Speaking of safety, you know Volvo didn’t skimp as the S60 R-Design comes with airbags almost everywhere you can think of. There is also a backup camera to help you see over the high deck line as well as the BLIS system – something Volvo was the first to introduce into the business. It essentially warns the driver of another vehicle being in the blind spot as a small orange light next to the wing mirrors lights up when the sensor detects a vehicle. This is extremely welcomed as the S60 has a few big blind spots with thick B-pillars and of course that sleek design. In addition, the S60 has the ability to detect if the driver is veering out of lane. A series of loud beeps would likely get the driver’s attention if those comfy seats indeed helped the driver to nod off. Those same sensors help to keep an equal distance between you and the driver in front of you in cruise control mode, even if the driver ahead speeds up or slows down. For those who would prefer that these electric nannies would go away, they can be turned off or on at the touch of a button. 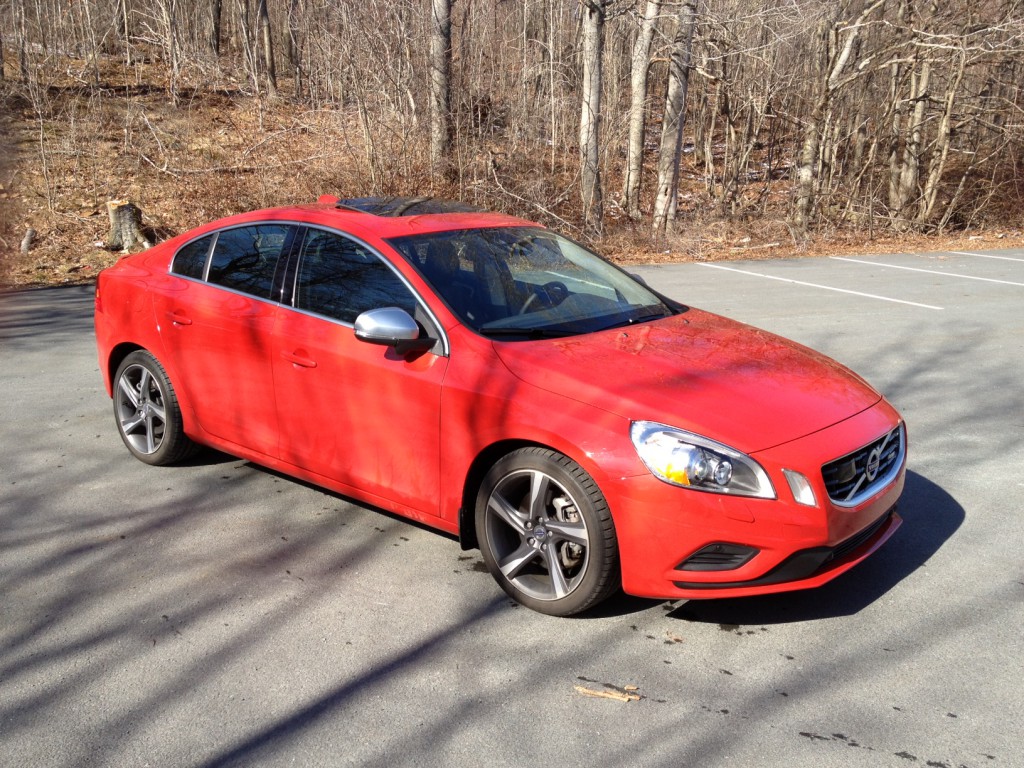 Another safety feature making waves, and again a first introduced to the industry, is Volvo’s City Safety feature. Basically at lower speeds the S60 can actually stop itself if it thinks the driver isn’t going to react in time or react at all. Obviously this is a bit difficult to test since a) I wouldn’t want to get the bill if the City Safety didn’t work and b) self-preservation is human instinct. Turning off that instinct to test a feature in a car is pretty difficult. However luckily, or unluckily for me, I was able to experience the City Safety feature full-stop (excuse the pun). The parking lot to my office has a gate which lifts up when a vehicle is approaching. I’ve exited this lot at least twice a day for half a year now and I know the exact speed I need to be traveling to get the gate to open without braking or blasting through it. The S60 obviously did not know that. Once it detected the gate and then realized I wasn’t prepared to stop and that the gate may not open, incredibly bright LED lights blinked furiously at me on the windshield (like the head up display that the Corvette uses) along with loud beeping noises and, eventually the car stopped itself completely. As sudden and alarming as it was (I thought the S60 had experienced a grave malfunction at first), I can now say with confidence that the City Safety system does indeed work. In fact, add up all the safety gizmos and the S60 becomes pretty impossible to crash even if you tried, and if you somehow succeeded at your suicide mission you’d likely be alright thanks to the oodles of airbags, whiplash protection, rollover protection and thick metal between the doors. Maybe that’s why the S60 recently earned a top safety pick. 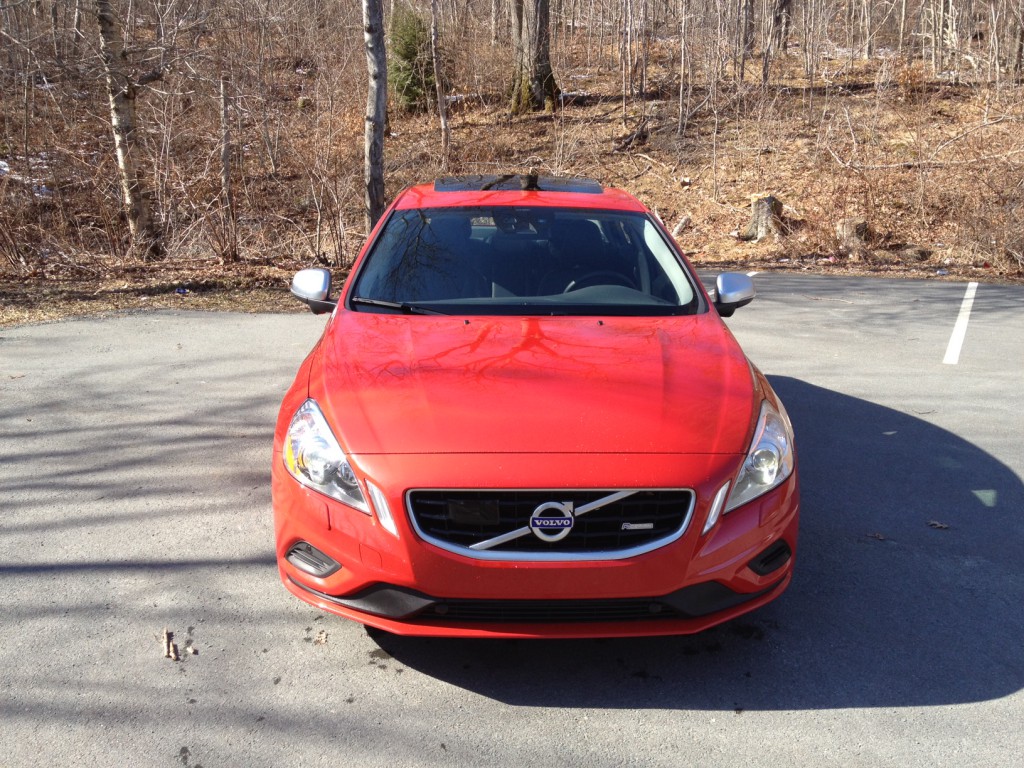 Okay so I purposely got all that stuff out of the way first so I could talk about the real story here and that’s the R-Design’s performance. As I alluded to, the S60 R-Design has 325 horsepower and 354 pound feet of torque that comes from an award winning 3.0 litre turbocharged inline six. This engine is absolutely brilliant. It’s quiet when you want it to be and comes to life with gusto when you put your right foot down. There is no turbo lag whatsoever and helps pull the S60 from 0-100 in just 5.3 seconds, although I question that number because it honestly feels a bit faster than that. The exhaust note could be a bit throatier, but still emits a decent tune when pushed. The engine is quiet at idle and low speeds and almost sounds like a 4-cylinder. The six-speed automatic  shifts quickly and when you want it to, but it all but neuters the engine in regular mode. As a result, I found myself in manual mode more often than not. Paddle shifters would be appreciated in this instance. 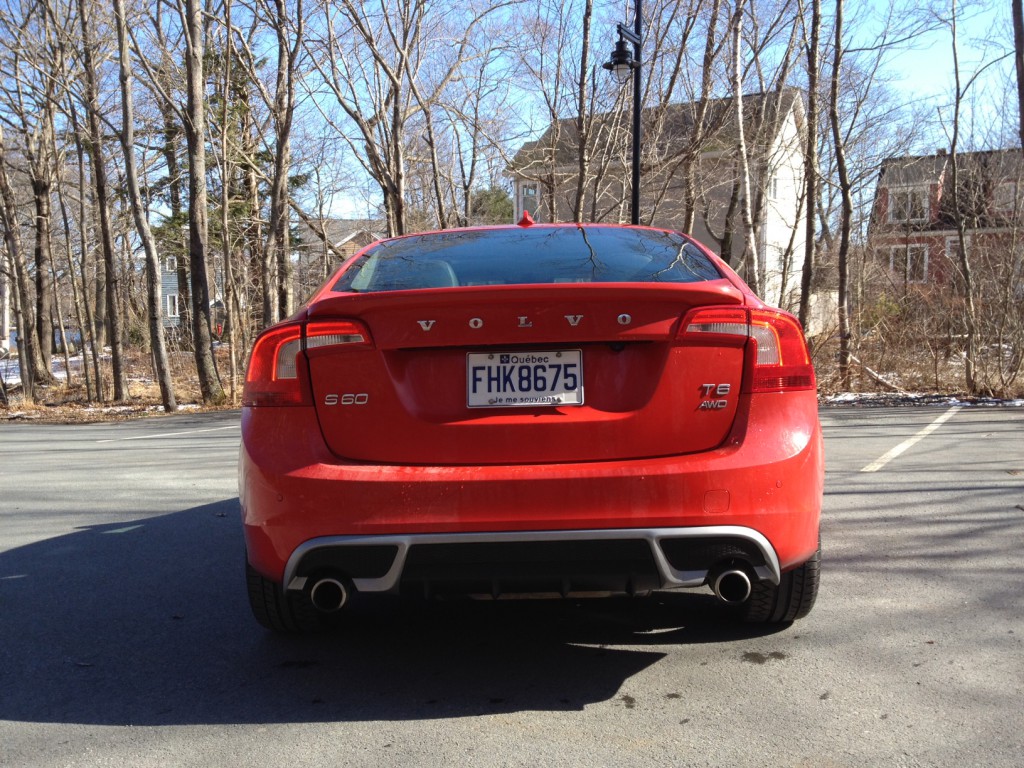 All that safety technology makes the S60 a fairly heavy car, but luckily this doesn’t upset the handling. The S60 can carve through a corner with the same precision and grace as its competitors. This is in part due to the all-wheel drive system which will kick in if any wheel slippage is detected. The thing is though, as good as the suspension is, it can get even better if you dig through about a million menus and submenus. There you’ll find a “sport mode” for the  stability control. This means that the point where the traction control kicks in becomes more tolerable and it turns off all the electric nannies. And believe it or not, it enables you to do spectacular tail slides and even donuts in the snow. The suspension has been reworked from Polestar which means lots of stability and that planted feel which gives confidence to the driver to push it harder, which the S60 is happily obliged to do. 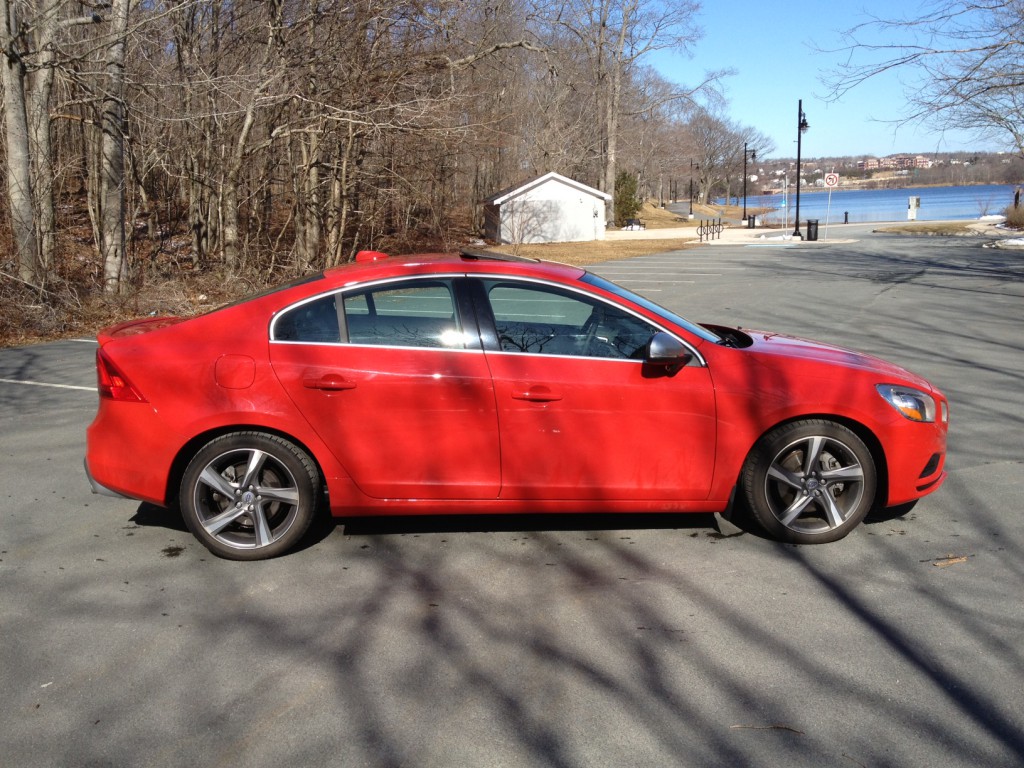 At this point it may seem like I’m gushing about the S60 and I admit that I am. It’s an attractive, well-thought, safe, comfortable, performance driven, unique sports sedan that I honestly fell in love with and thus, had a tough time handing back the keys. I became quite smitten. In fact, I was convinced this was going to be my new daily driver. There is seemingly no faults at all, right? Wrong. There’s one and unfortunately for me it’s a big one. 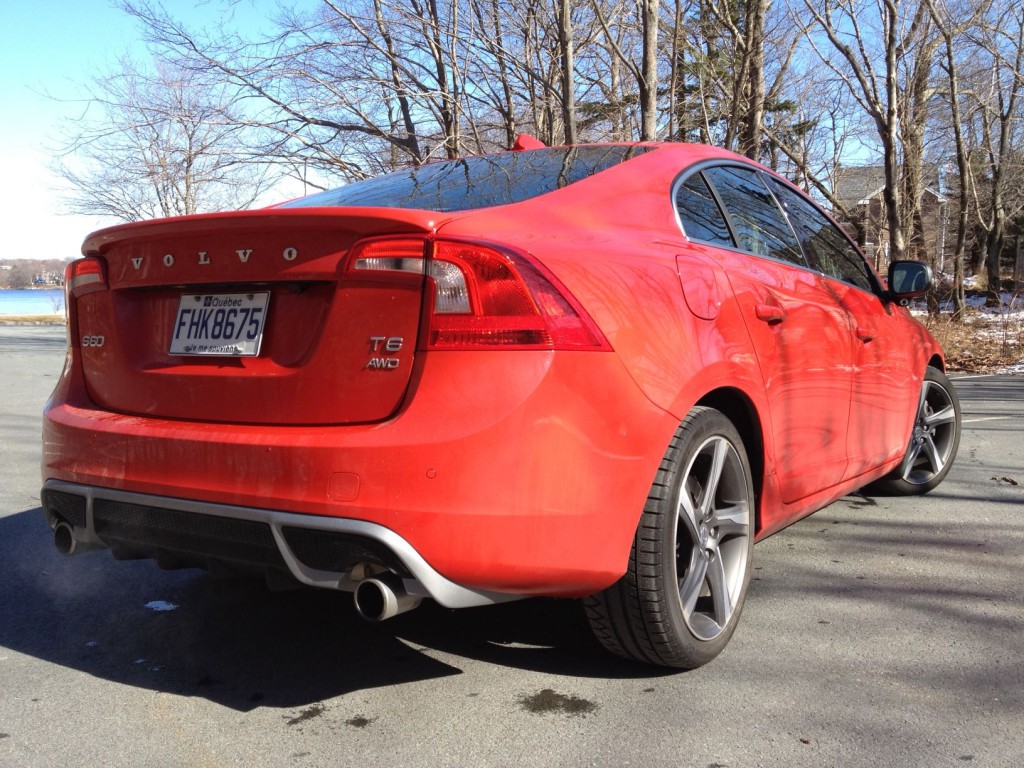 The S60 R-Design, or any S60 of any trim level for that matter, does not come with a manual transmission. For me, this is an absolute necessity if I’m going to plunk down this kind of money for a performance car. In fact, I was ready to put my money where my mouth is and put down a deposit for a brand new S60 R-Design and trade in my current vehicle. I realize and understand that it may be tough for Volvo to make a business case for an S60 with a third pedal, they never did sell a lot of manual transmission cars, but I’m sorry, if Volvo truly wishes to become competitive with the likes of BMW, Audi and Infiniti (and Volvo is not secretive about wanting to be mentioned amongst those brands) then they must offer this car with a manual transmission, at least as an option. If BMW, Audi and Infiniti can offer a manual transmission in their sports sedans, Volvo can too. And I implore them to. Because if they do, I’m sold. But unfortunately for now there is no manual transmission and unfortunately it’s the reason why I can’t give the S60 R-Design a perfect rating. However, if you’re the type that can overlook the lack of a third pedal, there’s absolutely no reason why the S60 R-Design shouldn’t be on your shopping list. It does just as well as its rivals from BMW and Audi, but does it for way cheaper.

Unfortunately for Volvo, that may mean giving up on the shock value of attractive styling because now instead of people saying “THAT’S a Volvo?!” they’ll be saying “what the hell was that?” wondering what it was that just blew away from them at the lights.