I’m not going to start this review off with the tired cliche of stating “this isn’t your father’s Cadillac”, mostly because it’s as predictable as a Volvo review with the phrase “gone are the days of boxy styling” somewhere within it.

The fact is, Cadillac has gone through a resurgence, but to be honest, that happened a long time ago. It’s no longer timely to comment on the big boats which your grandfather was so found of back in the day.

With that being said, I still get a bit of a shock whenever I drive new product from the prestigious GM brand.

A few summers ago I drove the latest CTS in its, then, highest trim level the V-Sport and I called it ‘brilliant’. However the CTS in its V-sport guise admittedly tugs at my heartstrings by its very nature of putting performance above all else. In the real world, most people prioritize things like comfort, fuel economy, interior room and tech over how balanced it feels in the corners.

So, let’s take a look at the ‘regular’ CTS – the one that is supposedly toned down from the V cars – and the one which might make grandpa feel a bit more at home. 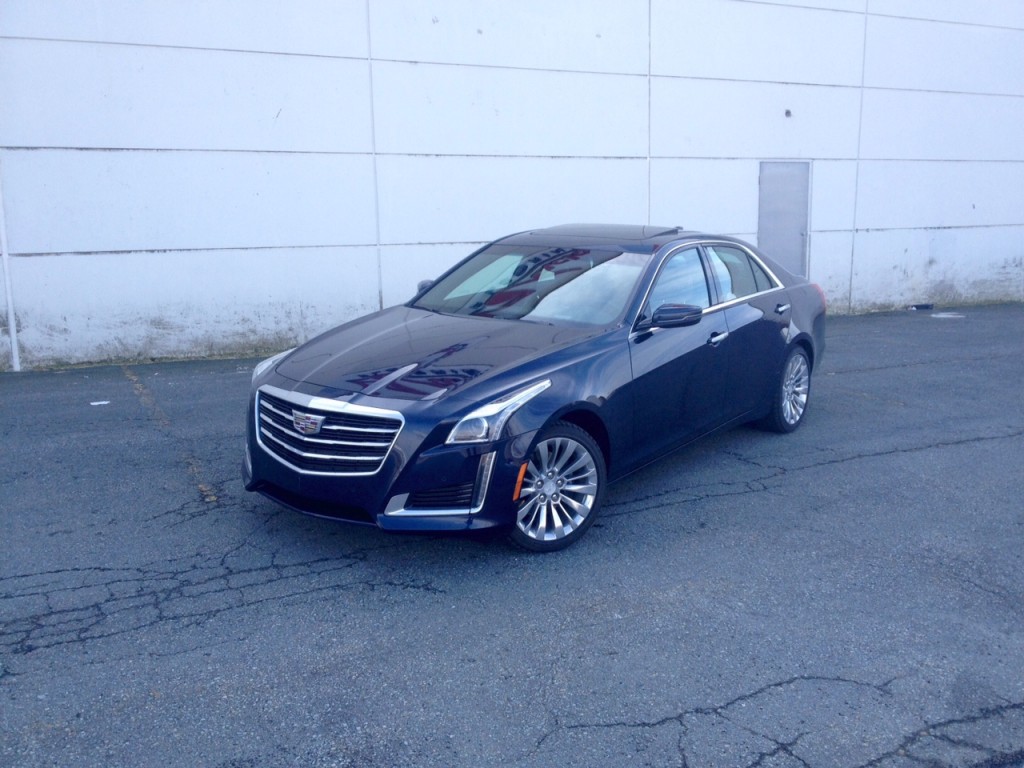 Cadillac has successfully etched out unique corporate styling for itself with its radar sharp edges and I believe the CTS embodies the corporate styling the best. In fact, I’d wager to say that it is the best looking Cadillac on sale today. The front end is low and wide with a stand out grille and LED running lights that span vertically yet seamlessly with the horizontal trim below. From the side you get a better sense of how big the CTS has gotten over the years with its large rear overhang but the side profile could be described as handsome and stately. Out back you get typical, if not softened looking Cadillac LED tail lights with a third brake light integrated into the deck lid. My tester came with optional 15-spoke 18-inch wheels which admittedly aren’t my cup of tea but there are a host of wheel options which measure all the way up to 20’s. 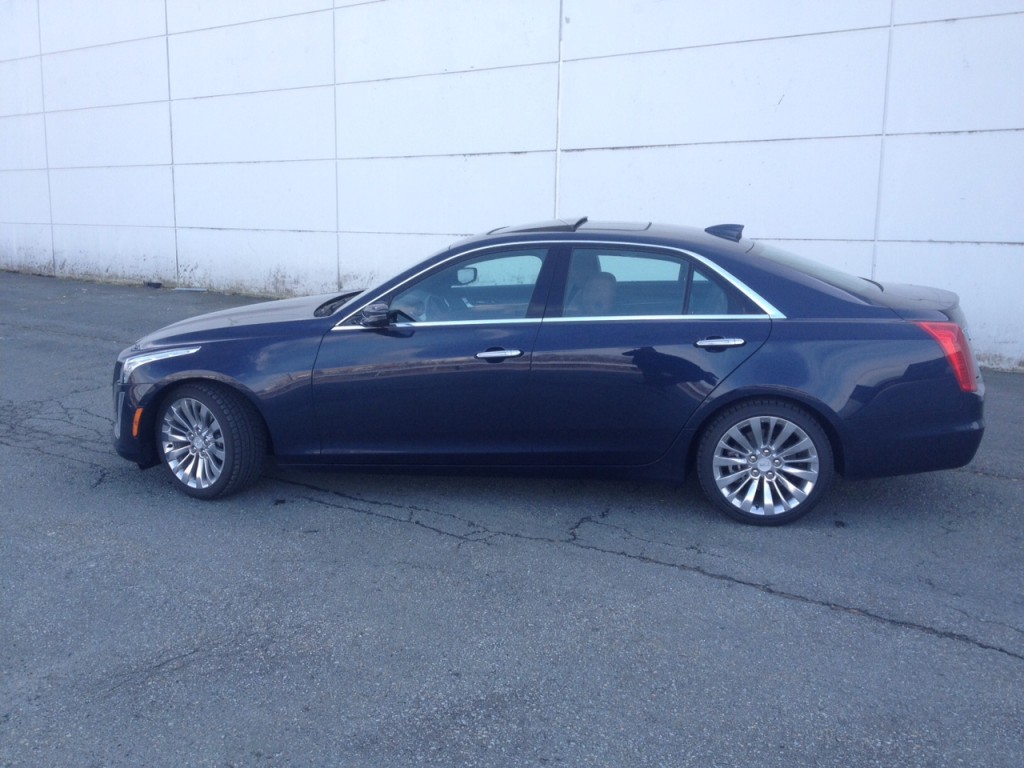 My tester’s paint, officially called dark adriatic blue metallic, did a good job of giving the illusion of a black paint job which turned a sparkly blue if the sun hit it just right. This seemed to catch the attention of a few of my friends who noted how ‘cool’ that was and the attention the CTS got in general is indicative of how much of a looker it really is. 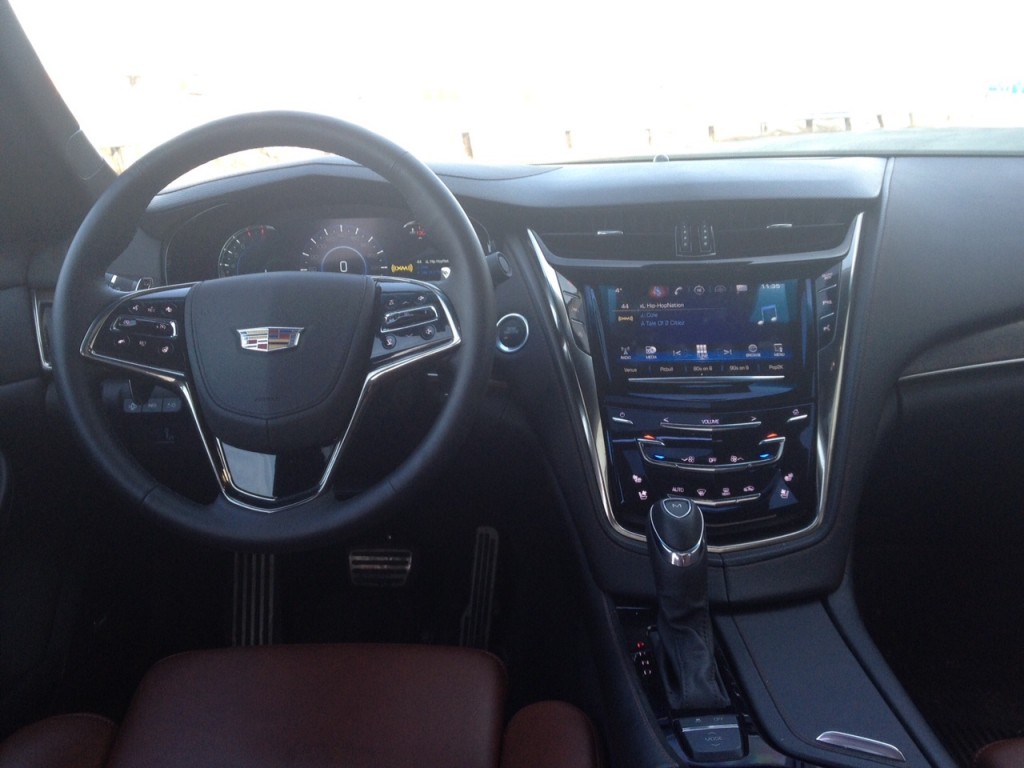 If you’ve been in any modern Cadillac the interior should seem familiar to you with its elegant design, however the capacitive touch dash still remains. From a logistical standpoint this approach continues to make little sense, however responsiveness doesn’t seem to be as bad, Cadillac might have put some work in to make sure those non-buttons actually respond to command the first time. Unfortunately the same can’t be said for Cadillac’s CUE system which displays itself nicely on the eight inch display screen, but it’s just as rebellious as ever not ever wishing to do what you want it to or at least not within a reasonable amount of time. However continuing with the dash layout, there’s actually a secret cubby hole which will reveal itself if you touch the button of the centre stack. Again, this only happens if you try a few times and getting it to close is even more difficult, but the cubby hole itself is a nice feature to have. The same can’t be said for the power operated cup hole cover which seems to be the answer to a  question no one asked. 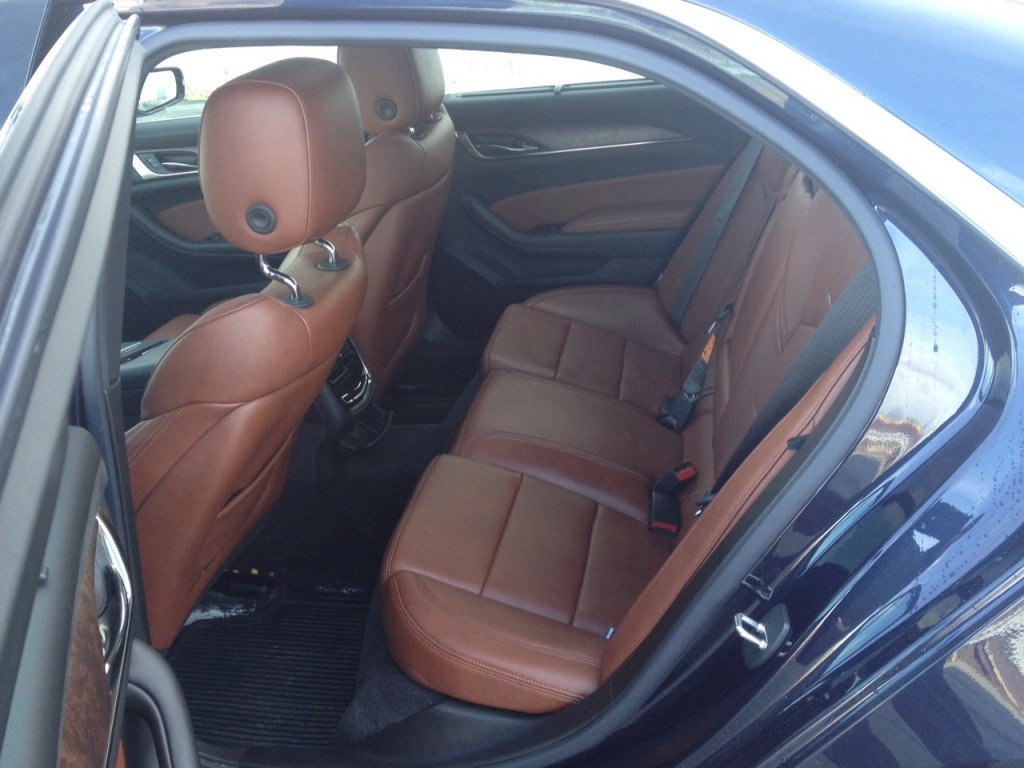 Even though the CTS is the biggest it has ever been, there is no typical Cadillac cavernous interior space. It feels a bit claustrophobic no matter which seating area you are relegated to. You want to make sure you don’t get stuck in the middle rear seat since the floor hump might be the largest I’ve ever seen, forcing some unwanted manspreading. Getting in and out of the CTS can be a difficult task since it sits low and the door openings themselves are not particularly wide. I bumped my head a few times trying to get in, be forewarned. However once you’re inside, most should feel comfortable with adequate leg room, but the rear seat backs are slanted at an awkward angle which could be uncomfortable on longer trips.

As an aside, the steering wheel itself is a nice design, but I wish it did feel a bit on the thin side. 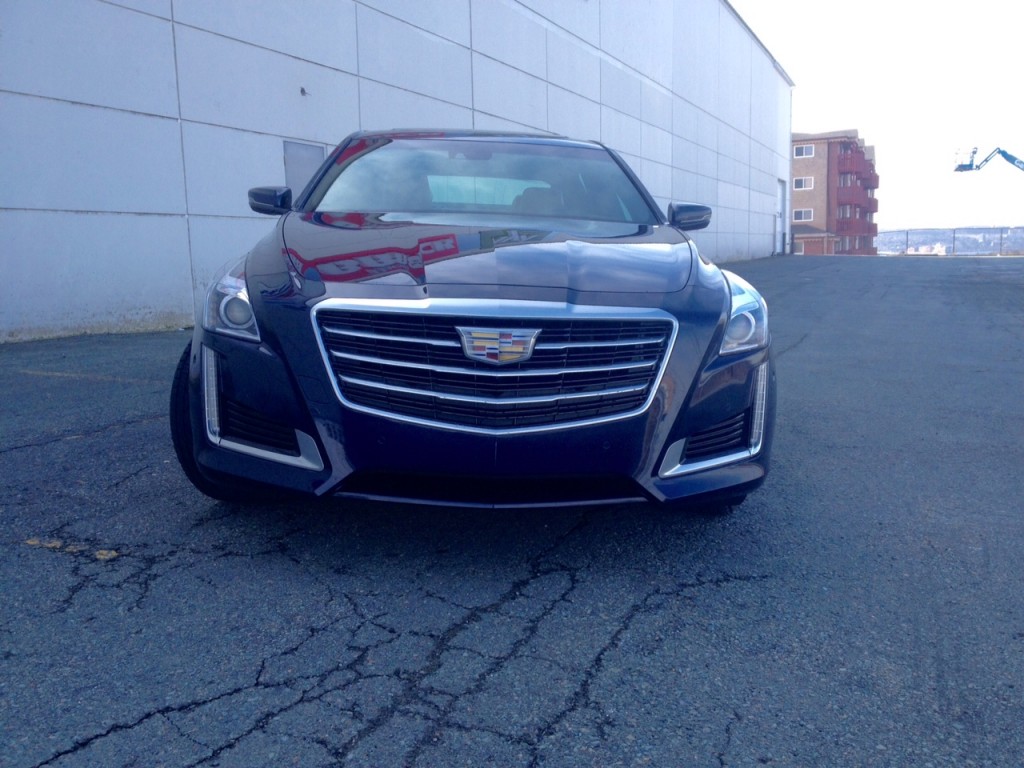 The CTS can be equipped with four engine options and my tester was fitted with the regularly aspirated V6, which is one up from the base engine. It’s mated to an eight speed automatic which can be shifted manually via some nice looking and feeling paddles. My only gripe is that they are attached to the steering wheel as opposed to the steering column making shifting in corners a lot trickier. 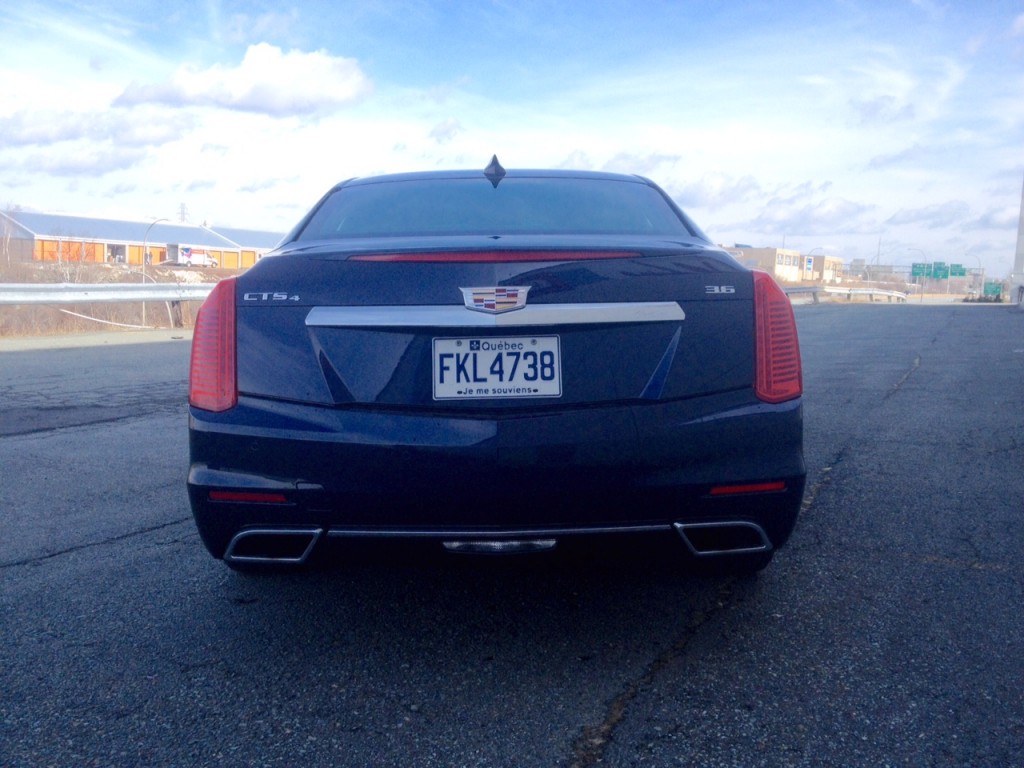 The engine itself makes a healthy 335 horsepower and 285 pound feet of torque. A nice exhaust note pairs well with smooth, linear acceleration with no hints of torque steer. It feels powerful and at no point did I find myself wanting for more power. There are four modes to choose from and each mode felt more than adequate in terms of power delivery, even in the ‘normal’ setting. 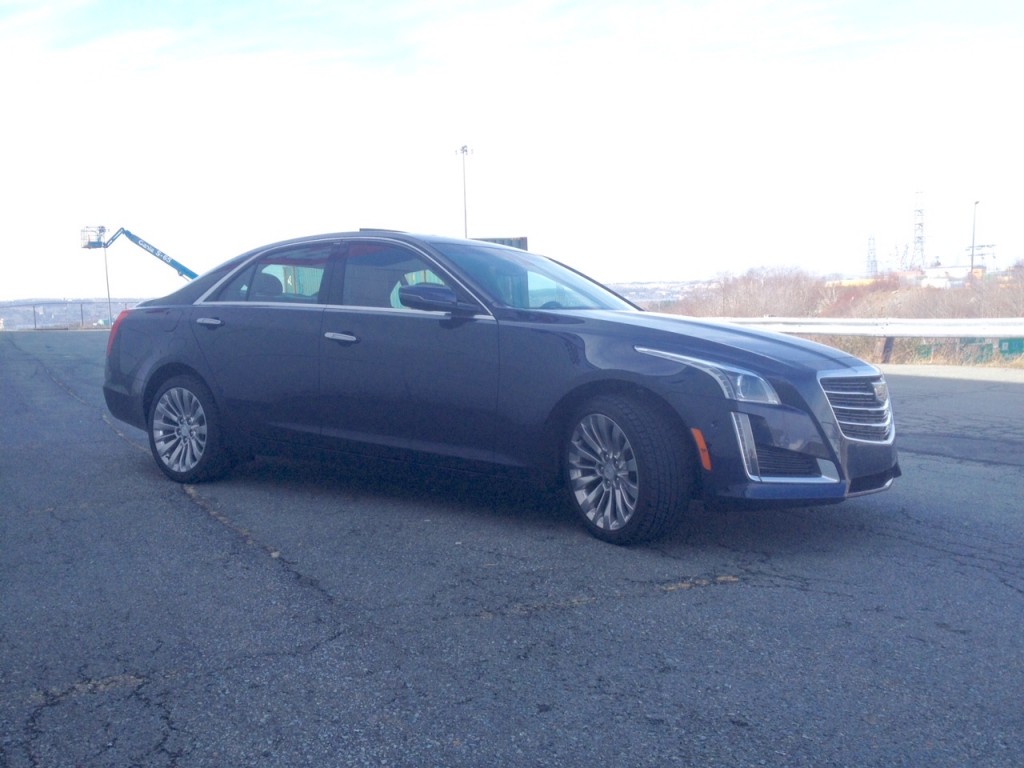 Speaking of the modes, they really do seem to turn the CTS into a different car depending on which you choose, yet each mode is quite good in its own way. Typically a lot of modes make little to no difference in the drive, but the seemingly jolt in personality when switching between the modes is quite obvious here. Sport and track modes do exactly what you think they’ll do and do it well, however I have to admit to keeping the CTS in normal mode for most of my time with it because it seemed to blend a the perfect mix of agility, comfort and fuel economy in one – a feat that’s difficult to achieve. 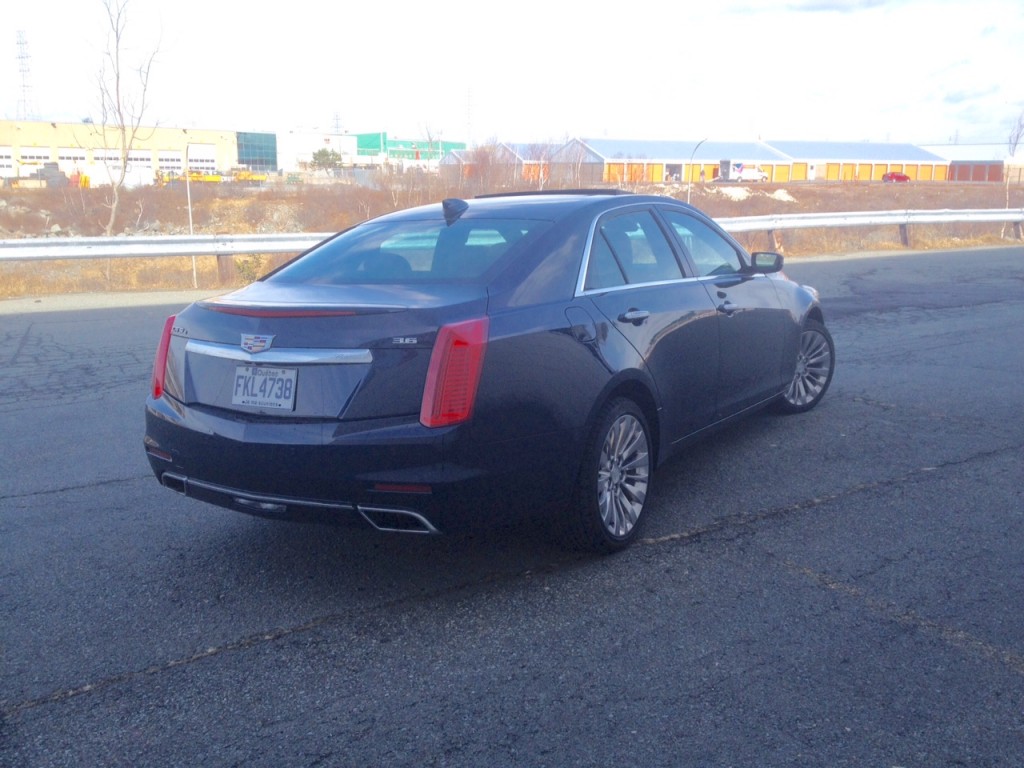 In the bends the CTS feels poised for a larger car even if a hint of understeer can be felt from time to time. The electronic limited slip differential let’s you have some fun if you want, along with those near perfect Brembo brakes.

Steering feedback is quite good, but some might find it to be too much on the heavy side. For me, the heavier the better so I was not complaining, although there was a noticeable disadvantage in parking lots. 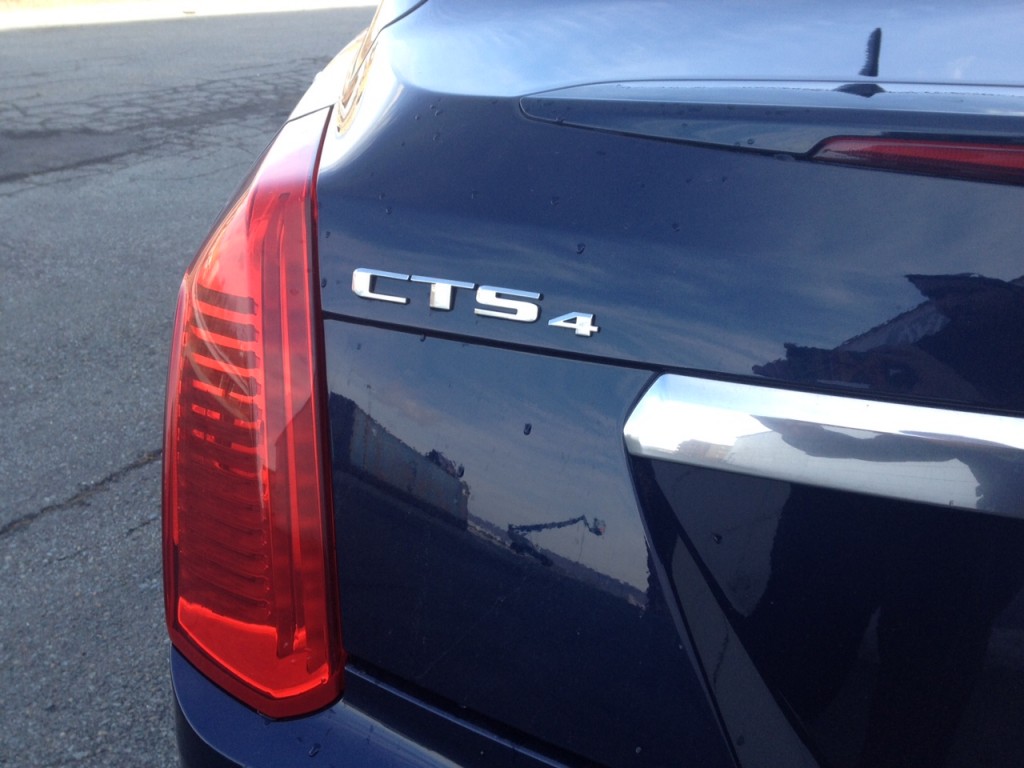 Those looking for what their grandfather had in his Cadillac are going to be supremely disappointed in the CTS. If that’s what you’re looking for, the bigger, floatier XTS is likely going to be more up your alley. For those who want a more engaging drive, the CTS is your guy. But I came to a bit of a startling conclusion at the end of the week.

I found myself actually liking the CTS in this guise a bit more than the ‘brilliant’ CTS V-Sport. All you need to do is read my gushing review to know how good the V-Sport is, but the CTS with the 3.6 feels a bit more tolerable for every day driving without giving up much of the fun of the V-Sport. And the fact that I found myself content in regular mode as  opposed to sport and track either means I’m starting to get old or that the CTS has finally been able to achieve something usually said about the BMW 5-series. It has a near perfect balance of comfort and performance without sacrificing much on either side. 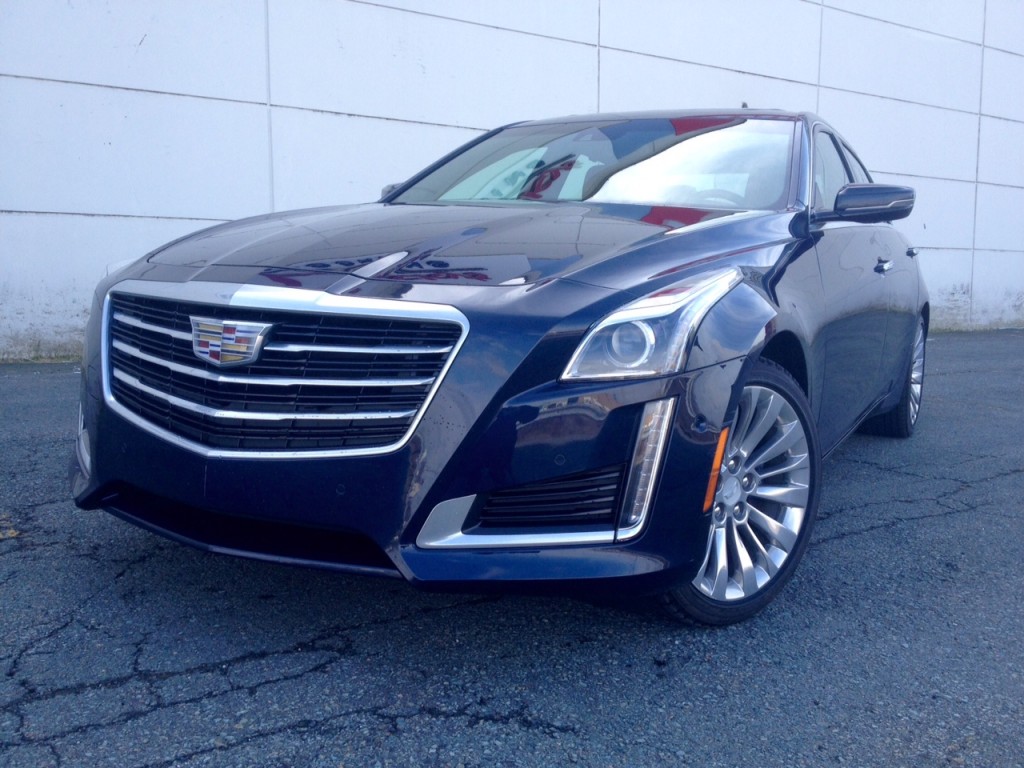 So save yourself the money and get yourself this version of the CTS. Says the guy who has yet to get any seat time from the range topping CTS-V. Ask me if I still feel that way after having driven the CTS-V. I have a feeling I’ll have to eat my own words on my recommendation.