There once was a time when Volvo declared to the world that they would never ever build an SUV.

Back then, the safety focused Swedish brand saw SUV’s as a potential chink in the armour of their safety pillar. SUV’s tended to roll over and if they did the roof tended to collapse. Wagons have a much lower centre of gravity and therefore are more inline both with the Volvo brand image and safety mantra.

It’s ironic then that Volvo’s biggest SUV has the daunting task of saving the entire company today. When Ford sold off Volvo there weren’t too many brands falling over themselves to buy it and with slumping sales, the company did not have the cash flow necessary to keep models fresh and modern.

As a result, there was doubt cast as to whether or not the brand could survive in the North American market. Luckily, parent company Geely injected some much needed cash into the brand and Volvo certainly took it’s time to introduce the first all-new model under the Geely ownership. Twelve years to be exact.

That’s fairly unheard of in the automotive industry. Most model refresh cycles are about four to five years.

So, Volvo has taken their sweet time to come up with a credible contender of a model they swore they would never build in the first place and have put all their eggs in one basket in order to save the company. Bold. Has it worked? I drove one to find out. 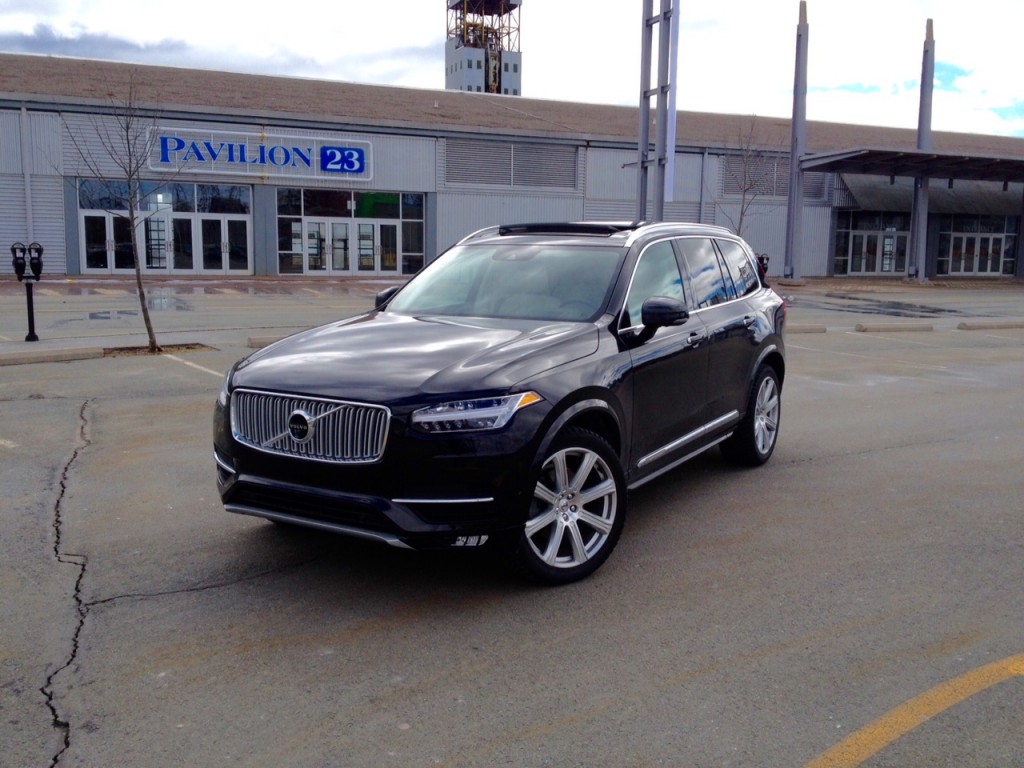 We first got a glimpse of Volvo’s new styling direction on the coupe concept presented a few years ago. It had most people drooling back then, but now that we see the new styling put onto a production model it’s safe to say Volvo has hit a home run. The corporate styling new has the Thor hammer LED lights – a very attractive and symbolic cue for the company which is meant to suggest power. A new grille and front fascia joins the hammers a long with a rather familiar looking side profile that also features optional 21 inch wheels. Out back, familiar yet modernized vertical LED tail lights help complete the look. My only gripe is that Volvo has now switched to red turn indicators. They used to be the only ones to consistently use amber indicators, and you can read all about why I think amber should be mandatory on all vehicles in North America, but other than that, I have no gripes about the styling at all. In fact, I’m confident in saying this is the best looking SUV currently on the market today. And yes, that includes the fancy Escalades and Range Rovers. The fact that the XC90 was able to turn so many heads as I drove by is an indication that I could be right. 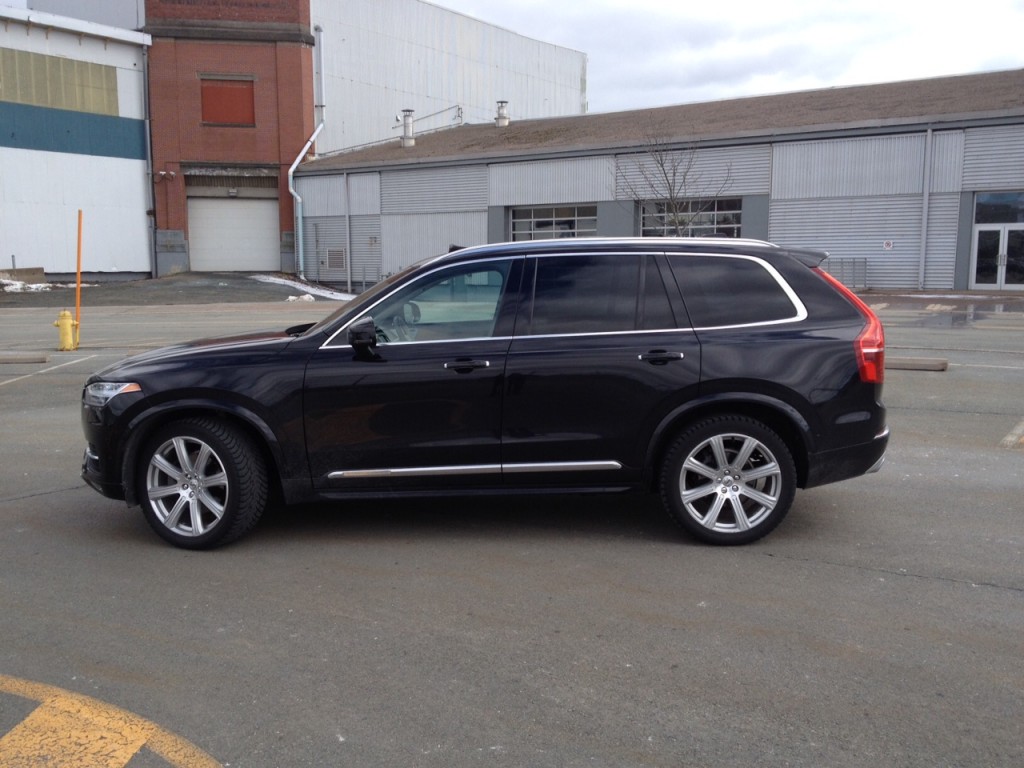 What’s as impressive is the interior design is equally has head turning. My tester came with the optional blonde interior which really helped to brighten things up, but most people who had seat time in the XC90 were particularly impressed by the gorgeous wood finishes and overall quality. Volvo really took a restrained yet elegant approach to the styling and there’s even quirky touches such as little Swedish flags stitched into the seats. 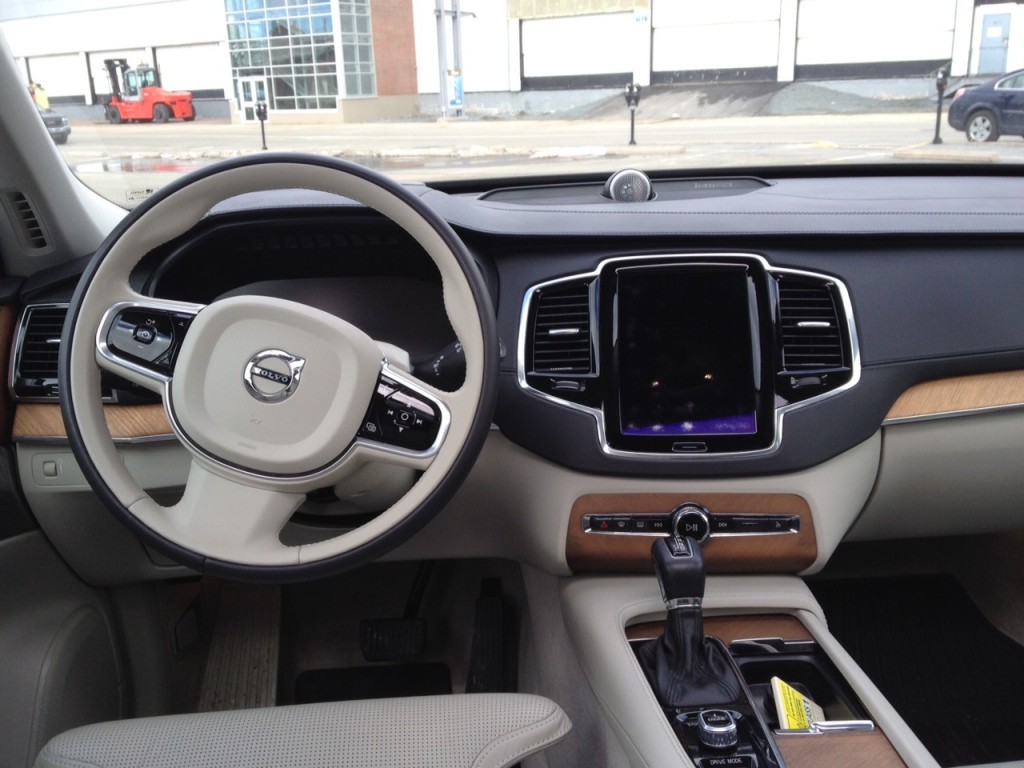 Instead of push button start, but you a nice looking toggle switch in between the centre console. Instead of a plethora of buttons on the dash, you get a large iPad-style screen which operates in very much the same manner. It’s very easy to get used to and is very intuitive. It also houses some of the clearest images I’ve ever seen from a back-up camera, which features many different views such as the great overhead bird’s eye view. My only complaint is that the polarized material on the screen meant to reduce glare was very obviously starting to come off due to driver use. To be fair, the XC90 had over 21,000 kms on it when I picked it up (which is unheard of for a press car), but if you were the owner and this happened to the screen after 21,000 kms of driving I doubt that you’d be willing to give that a pass. 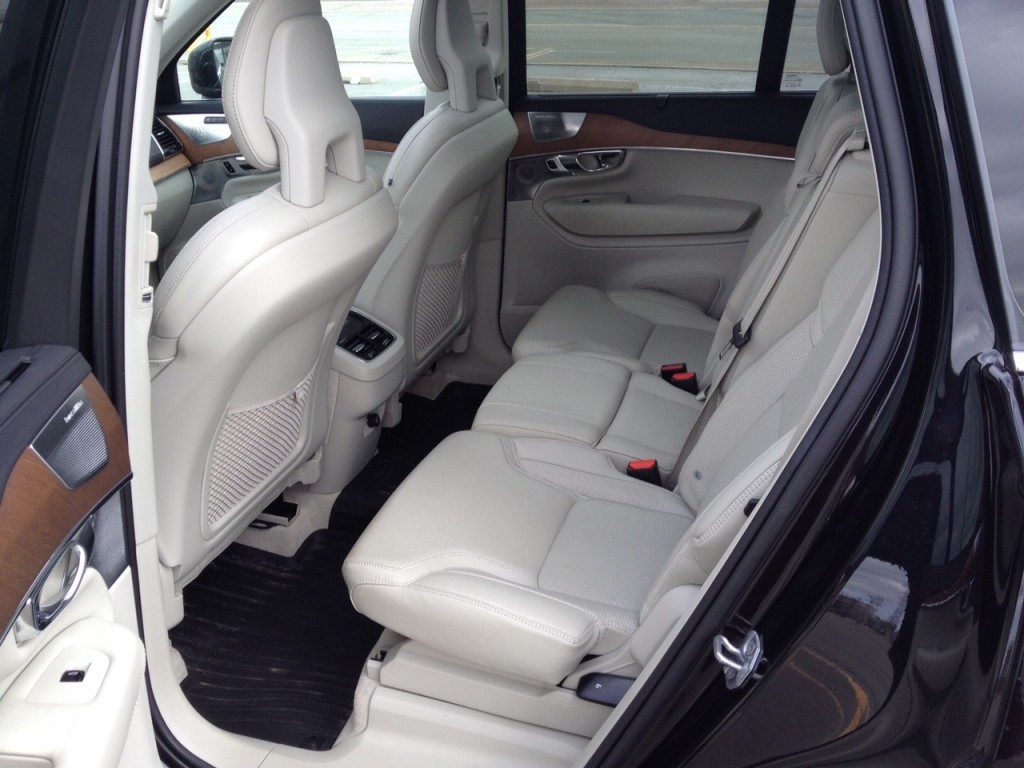 Volvo was always quite strong at maximizing interior room in the XC90 and the new version is no different. In fact, it probably has the most spacious third row seats in the segment. This row is usually only suitable for children, but in the XC90 I would wager that they could be adequate for adults, even on longer journeys. With all the seats down you get a massive load floor and even with all the seats up, cargo room is still decent. There is a built in divider as well to separate items or to keep them from rolling around.

You’ve likely heard this before, but that’s because it’s true: Volvo makes some of the best seats in the business. The XC90’s seats are tremendous and can bend and flex to accommodate any stature. The seats in the other two rows are just as comfortable.

Aside from the fading screen, I can’t find anything else truly wrong with the interior. Top marks. 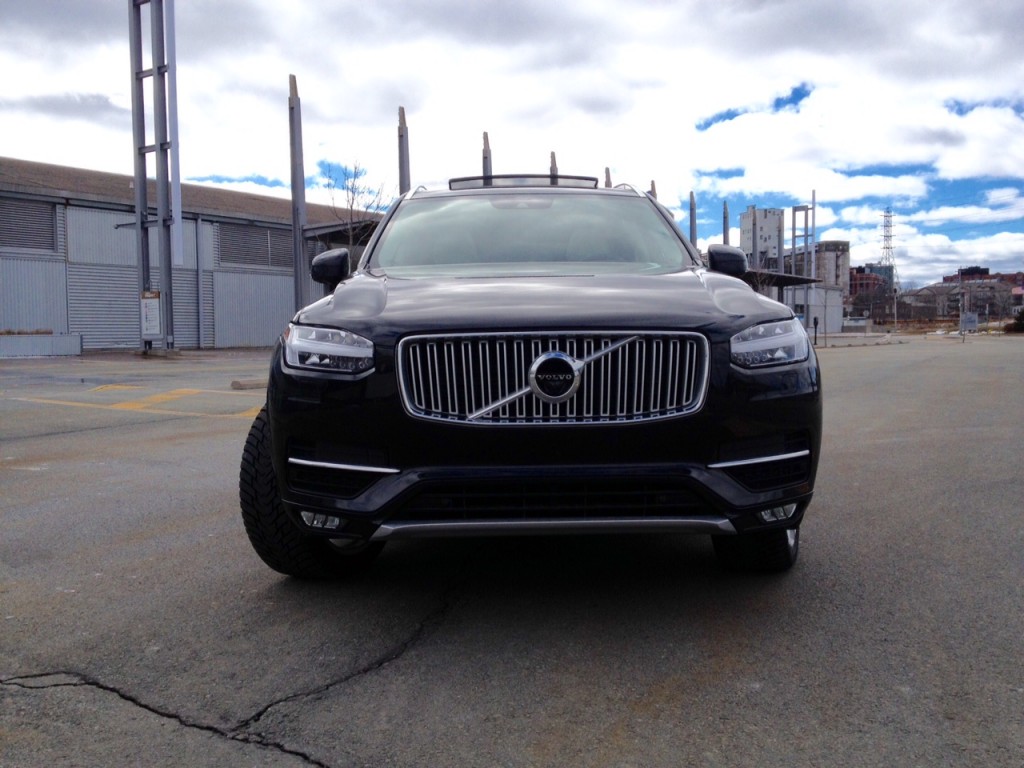 If you look under the hood of any new XC90 you might be in for a bit of a surprise. Two surprises actually. Firstly, the only engine available is a 4-cylinder. No 6’s or 8’s to be found like some of its competition. Secondly, in order to get adequate and competitive power out of the 4-banger, the XC90 gets both turbocharging and supercharging. The end result is a mill that produces 316 horsepower and 295 pound feet of torque. 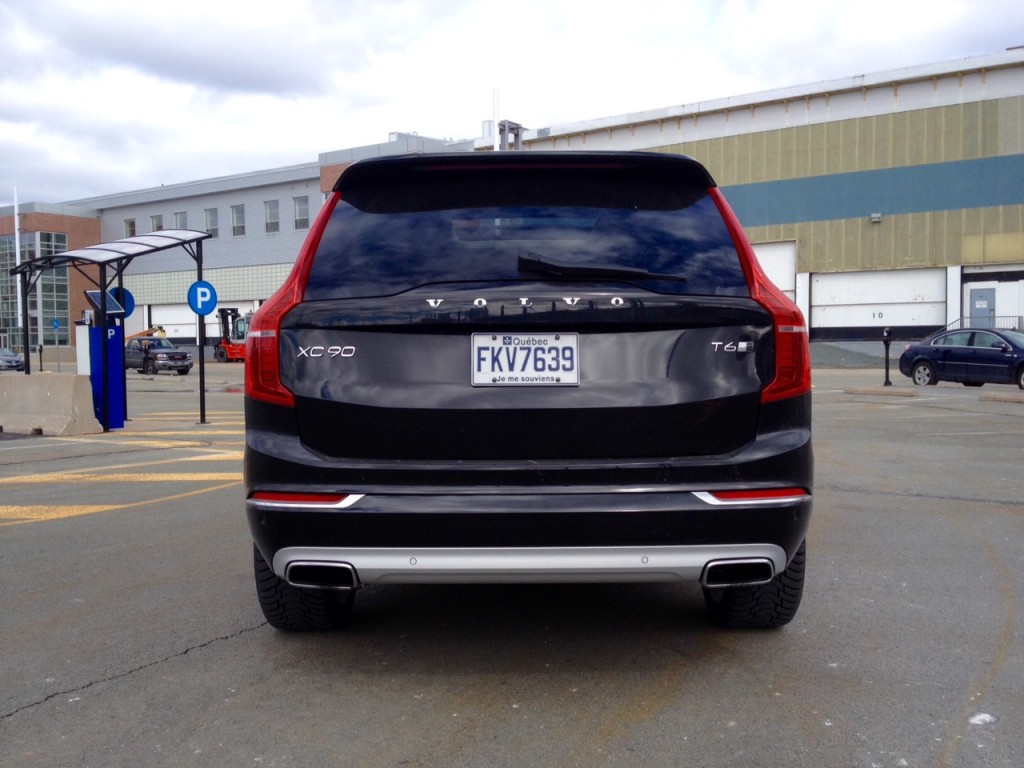 Not once did I find myself wanting for more power and oddly enough, with the exception of a slight whine from the supercharger at lower speeds, engine noise is minimal inside the cabin, even when you push it. If you do feel that you need more power there is a plug-in T8 version which will adds an electric motor for 400 horsepower combined. 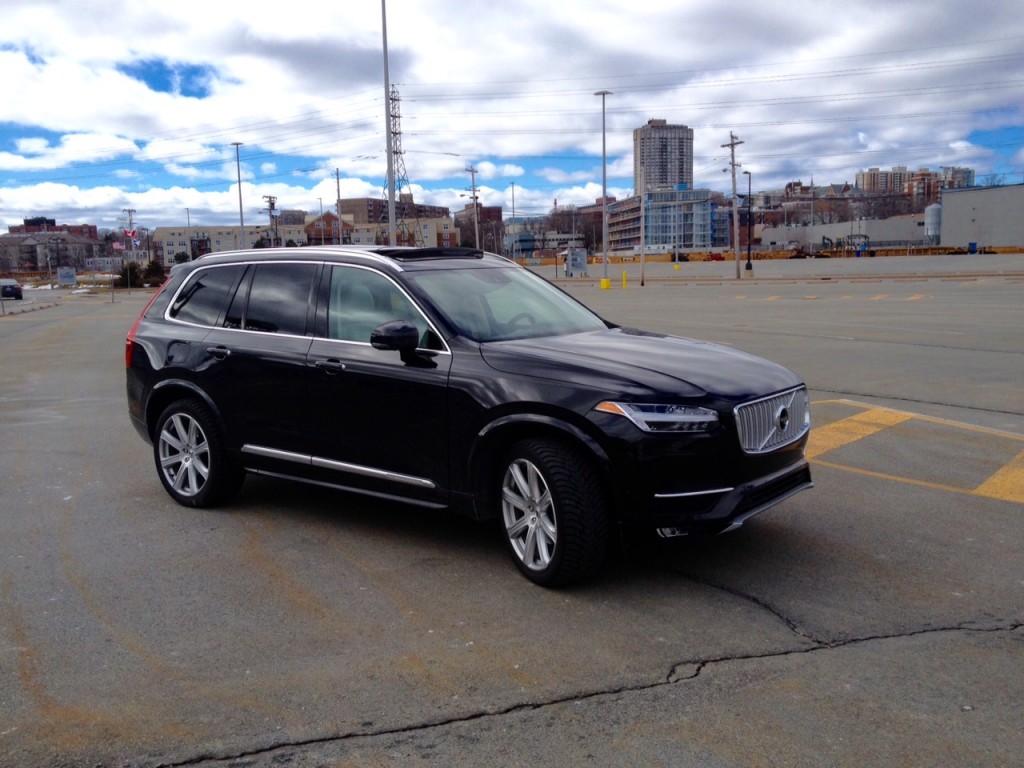 The XC90 gets four different drive modes which can be accessed by a nice looking and feeling roller-toggle in between the two front seats. You have your choice of Eco, Comfort, Off-road and Dynamic. The latter is obviously the most engaging as it holds the gears longer while Eco mode does the exact opposite. Comfort mode is the mode Volvo suggests for every day driving and I’m inclined to agree as it has a nice blend of performance and comfort as well. 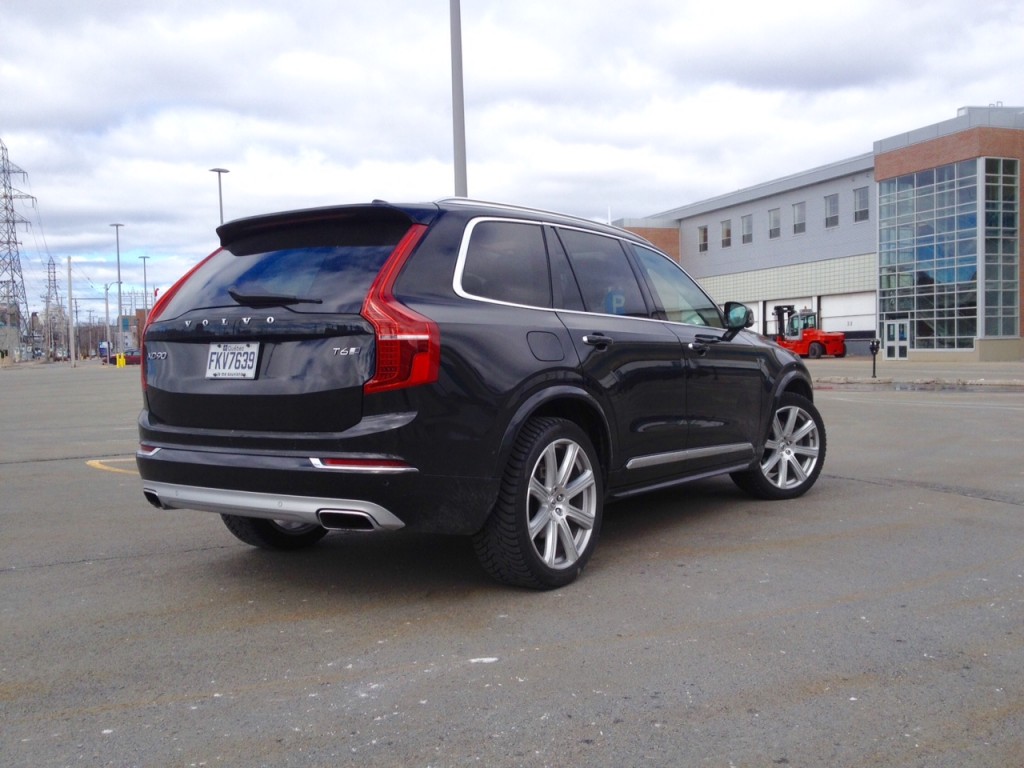 Ride quality isn’t bad but the big 21-inch wheels can make for a bit of a harsh ride which definitely translates into the cabin. This produced a few odd rattles and squeaks inside – something that should not be present in a vehicle of this price. With that said, the ride isn’t jarring. 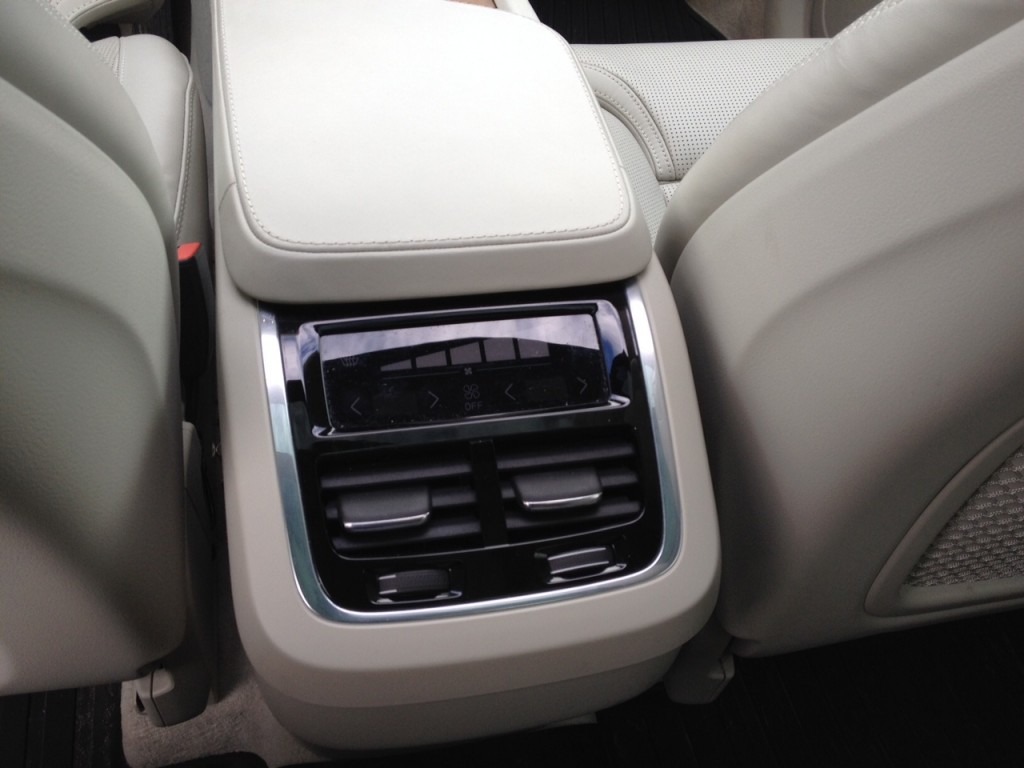 The XC90 is surprisingly capable both in the bends and on the highway as it has the typical planted feel you’d expect from a European car. Passing on the highway is a breeze, or if you choose, you can have a more relaxed drive while the adaptive cruise control and lane keep assist help to keep you from having a crash. Once you hit an onramp, switch to dynamic mode and take the curve with a decent amount of speed all while having peace of mind that the XC90 won’t wobble about. Sure it feels like a large SUV, but there is still plenty of confidence when cornering. 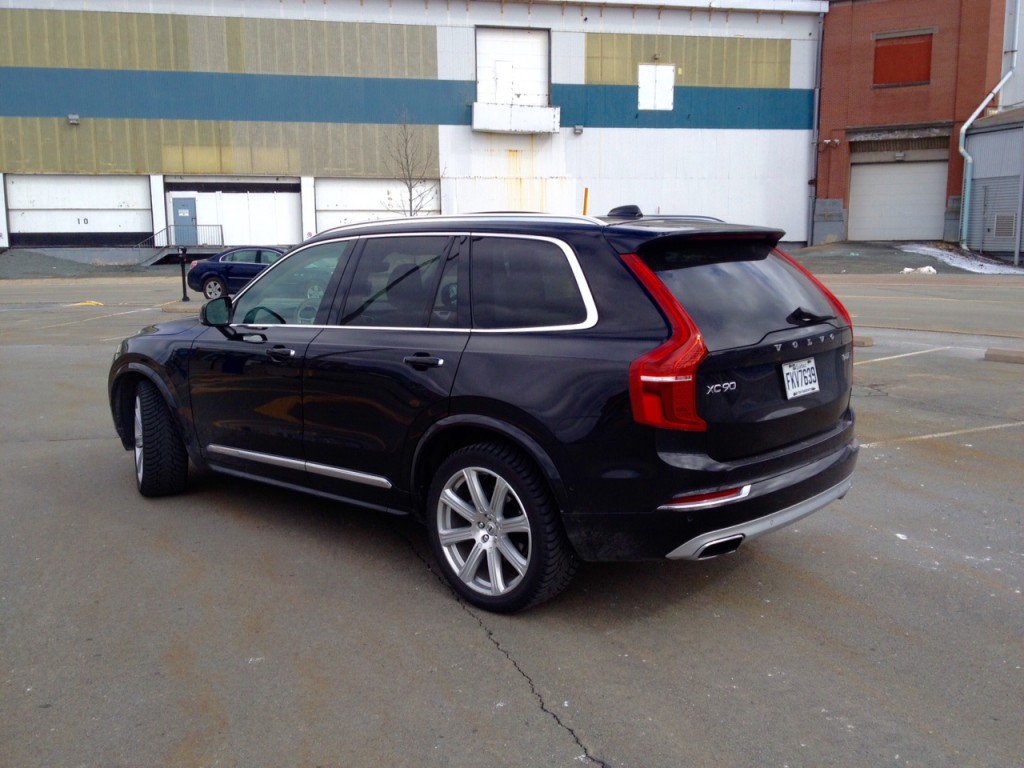 One of the chief reasons why Volvo opted to put only 4-cylinder engines under the hood is to aid with fuel consumption numbers. Officially, it is rated at 11.5 L/100 kms city and 9.5 L/100 kms highway. I managed 11.9 L/100 kms in mixed driving which isn’t too bad, but let’s be honest, some manufacturers can get similar numbers from 6-cylinder engines without overcomplicating it with turbochargers and superchargers. As much as I like the idea of both, there doesn’t appear to be much advantage and both could cause problems down the road depending on the reliability scores of this new engine. 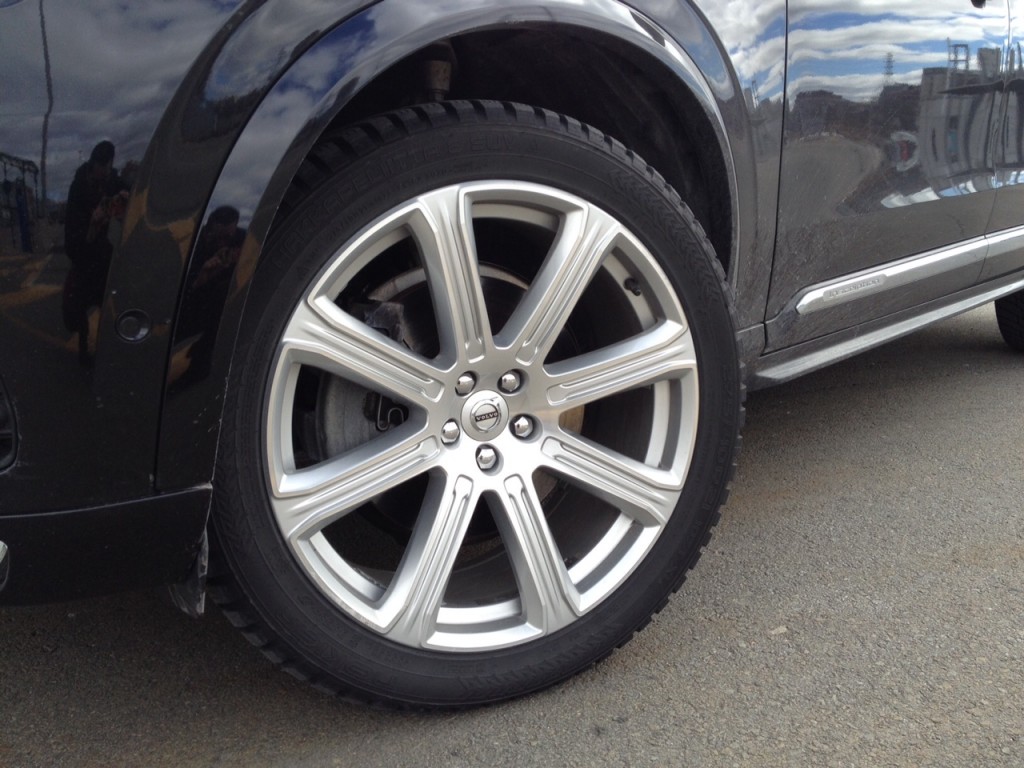 I was rather excited to get my hands on the new XC90 and now that I have I am happy to report that I came away impressed. This is the best looking SUV, it has a class leading interior, great quality of materials, modern tech, great power and handling and, being a Volvo, an impressive suite of safety features which will ensure you keep yourself alive long enough for the next version. Let’s just hope the next version doesn’t take another 12 years to get here.

But if this is the new direction of Volvo then then I have a feeling they will do just fine as a company. The model that Volvo swore it would never built has indeed done its part for saving the image of the company. Now all that remains to be seen is whether or not it’s enough to get BMW and Mercedes loyalists out of their German schnitzels and into Volvo to try some gourmet Swedish meatballs. 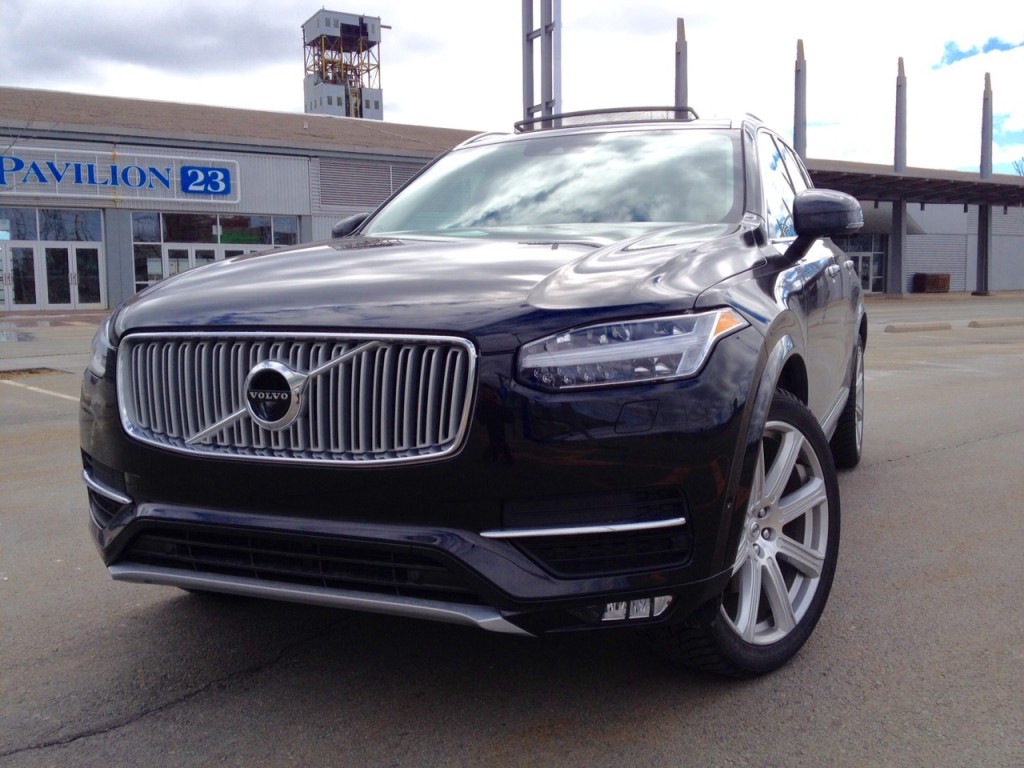