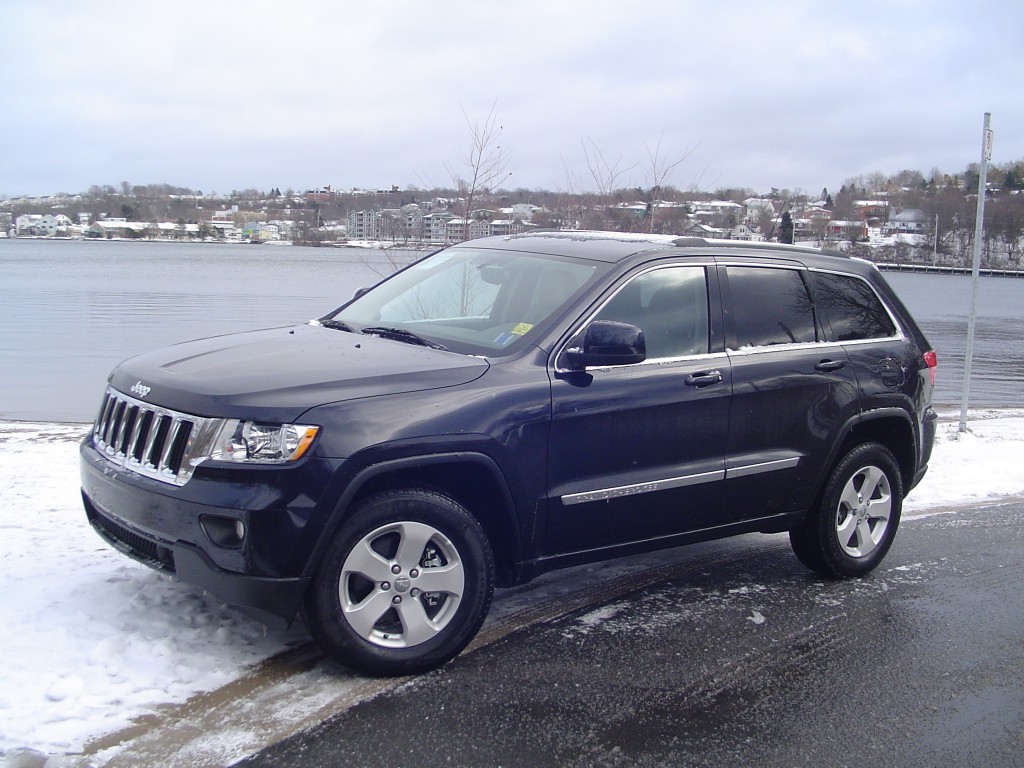 As cliche as is it, the old adage “never judge a book by its cover” very much holds true in almost every day to day situation.

For example, have you ever seen the traditional Indian dish called dhansak? I mean, it honestly looks like cow dung, but my goodness is it ever tasty. I almost didn’t try it because it looked so completely unappetizing. That would’ve been a huge mistake.

The same can be said for people. Remember when Susan Boyle walked out on stage with that raggity hair, dodgy lower class dress and that cheeky smile? We all rolled her eyes and laughed in her face. Until she opened her mouth. Which then caused us to shut ours indefinitely. No one would’ve guessed such a beautiful voice existed underneath that exterior.

Boy, was I wrong.

First things first, this new iteration of the Grand Cherokee is easily the best looking of any generation before it. The design is simple, yet elegant. It exudes a sort of premium look while not alienating its key base of hardcore Jeep enthusiasts. Put simply, the Grand Cherokee would fit in perfectly in both upper class suburban neighbourhoods as well as gravel driveways in the countryside. The new Grand Cherokee is the first vehicle to speak Jeep’s new design language. Expect a similar design direction for the next generation Compass and, eventually, the rest of the Jeep lineup. 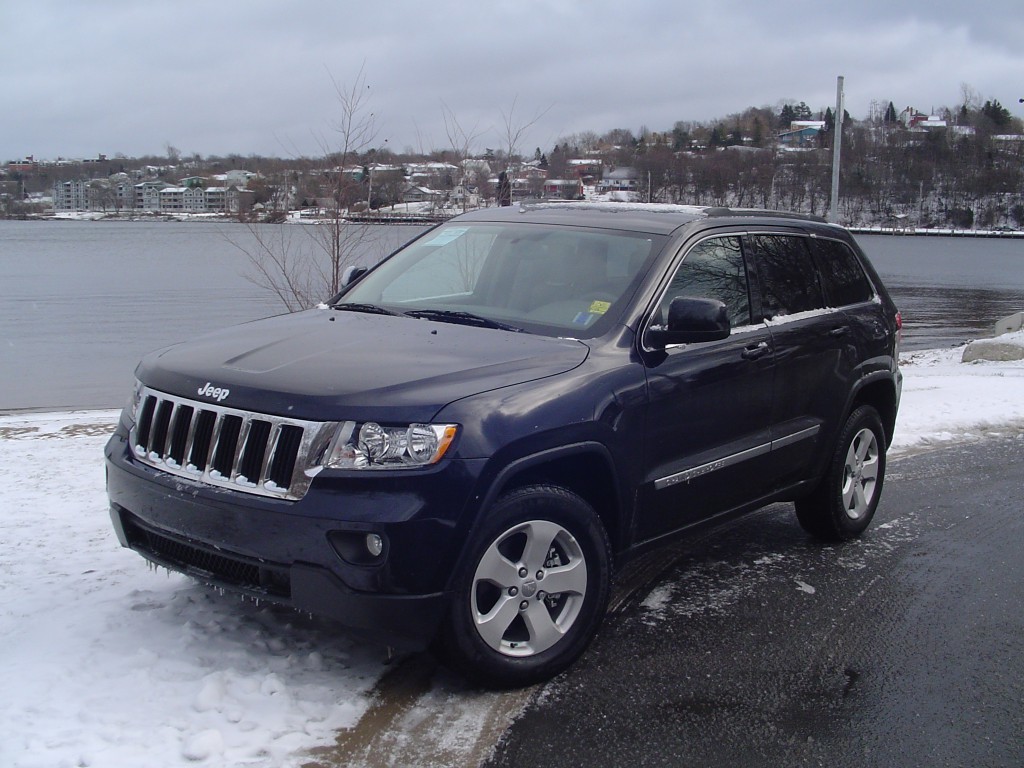 Inside the good news continues. Materials are now in line with price. There is no longer hard cheap plastics, everything is high quality soft touch material. My tester was fitted with Jeep’s “Laredo X package” which adds premium Capri leather, 18 inch aluminum wheels, a 7 inch touch screen display, an Alpine sound system along with sensors and a rear back-up camera. Do yourself a favour and check off this package – it’s a must have. It gives the Jeep more of a premium feel and puts it more in line with its price point. 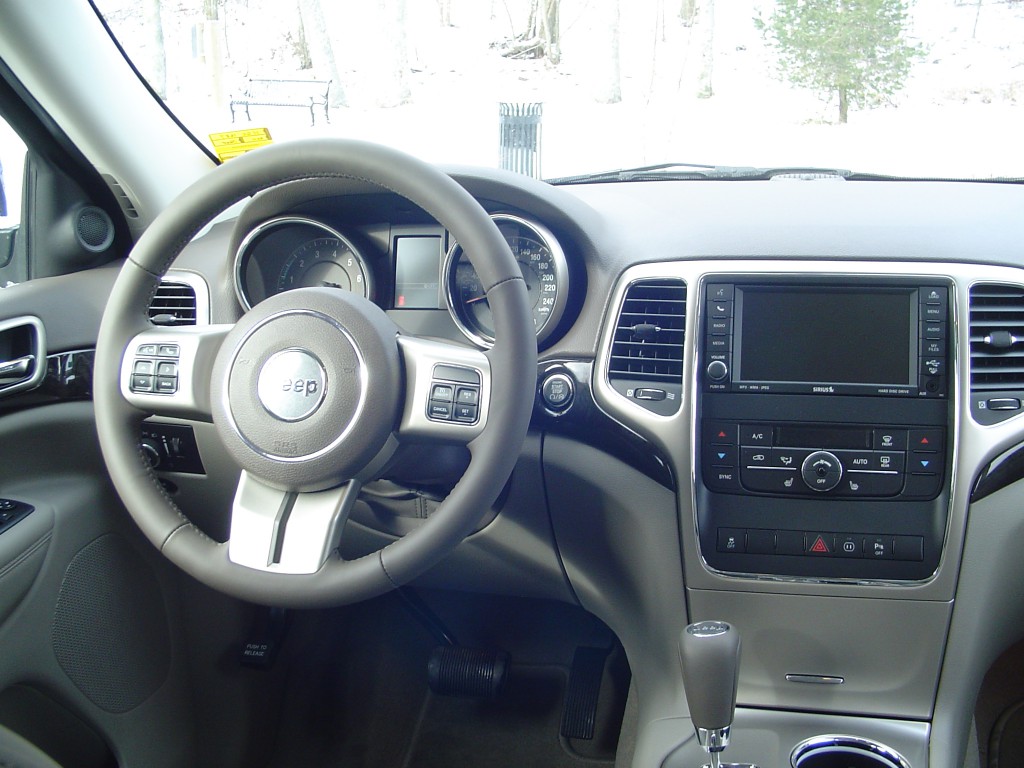 The new Grand Cherokee is actually 5.3 inches longer than its predecessor which translates into much needed rear leg room. Even with the driver’s seat back all the way, there’s still adequate knee room for rear passengers. The rear seats can also recline which is a nice feature. Ingress is also much easier as the rear doors are a bit longer. 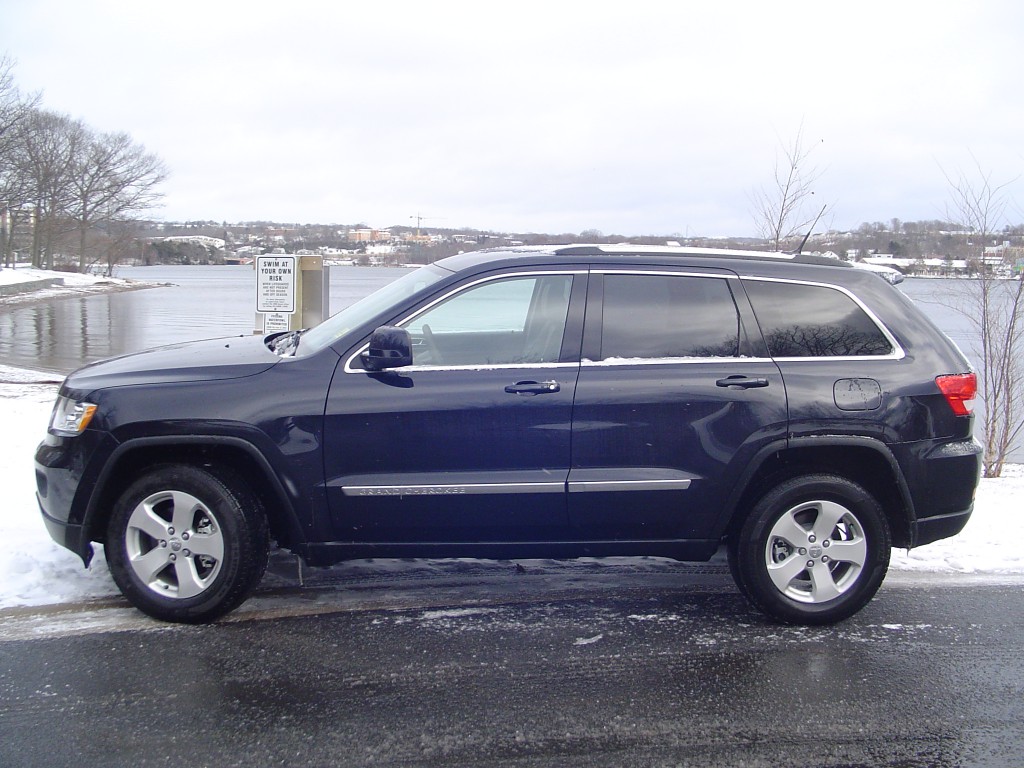 Cargo room is rated at 31.5 cubic feet which is only slightly bigger than the old Grand Cherokee. Space is adequate, however it’s outdone by most of the Jeep’s rivals. Still, for every day use there is plenty of space. 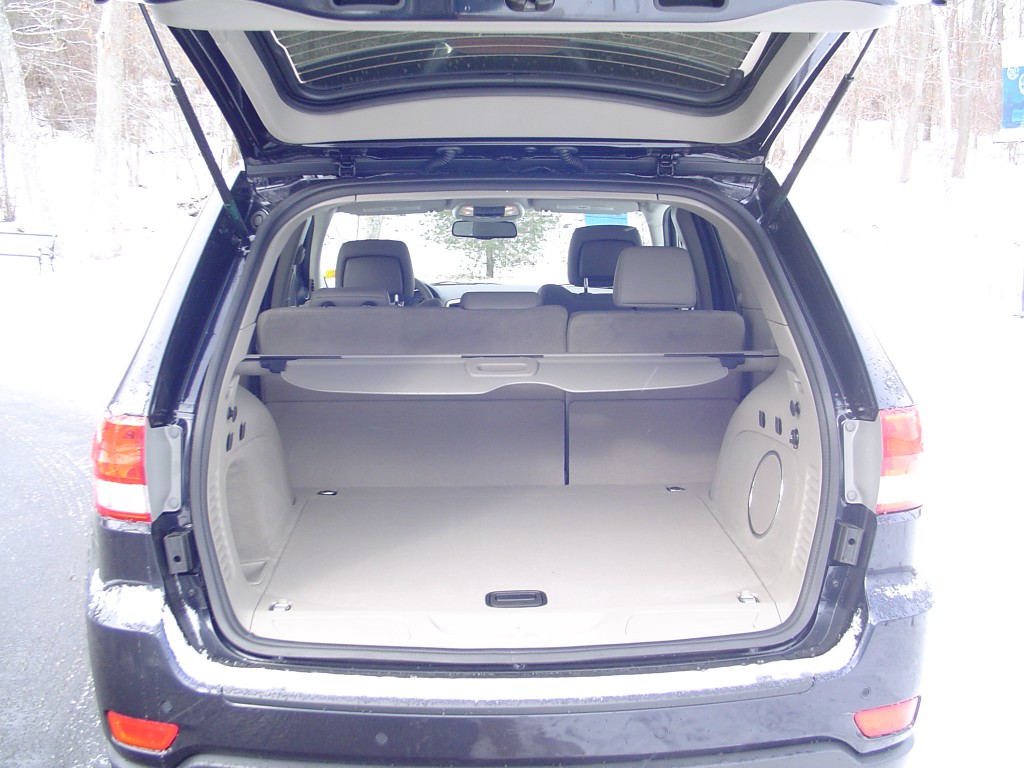 Inside the engine bay is Jeep’s new 3.6 litre V6 making 290 horses and 260 pound feet of torque. This sounds impressive, but unfortunately, I must say, I was left feeling underwhelmed with this engine. 0-100 takes a rather longish 9 seconds. That’s better than its predecessor’s run of 10.5 seconds with the old 3.5 litre V6, but still not that great. In fact, the engine just plain feels slow when you push it. Now, part of the problem is that Jeep decided to step the gears with fuel efficiency in mind. As a result you have an engine that sort of robs the power. There is an option of shifting gears yourself, however with the unusual “side-to-side” gear shift set up and the fact that there’s only four gears, it really does not make for much driving fun. Another odd thing with this set up is when you’re in manual mode and you wish to go back to regular automatic mode, you have to scroll through all four gears before it goes back. You can’t just switch it back to ‘D’.

I know this is a 5,000+ pound vehicle, but BMW is able to get 300 horsepower from its inline six engine in the X5 and it can go from 0-100 in just 6.6 seconds. And the X5 weighs more. Granted the X5 has twice as many gears and isn’t exactly the Grand Cherokee’s competition (although the new refinement of the Grand Cherokee brings it closer than its ever been). 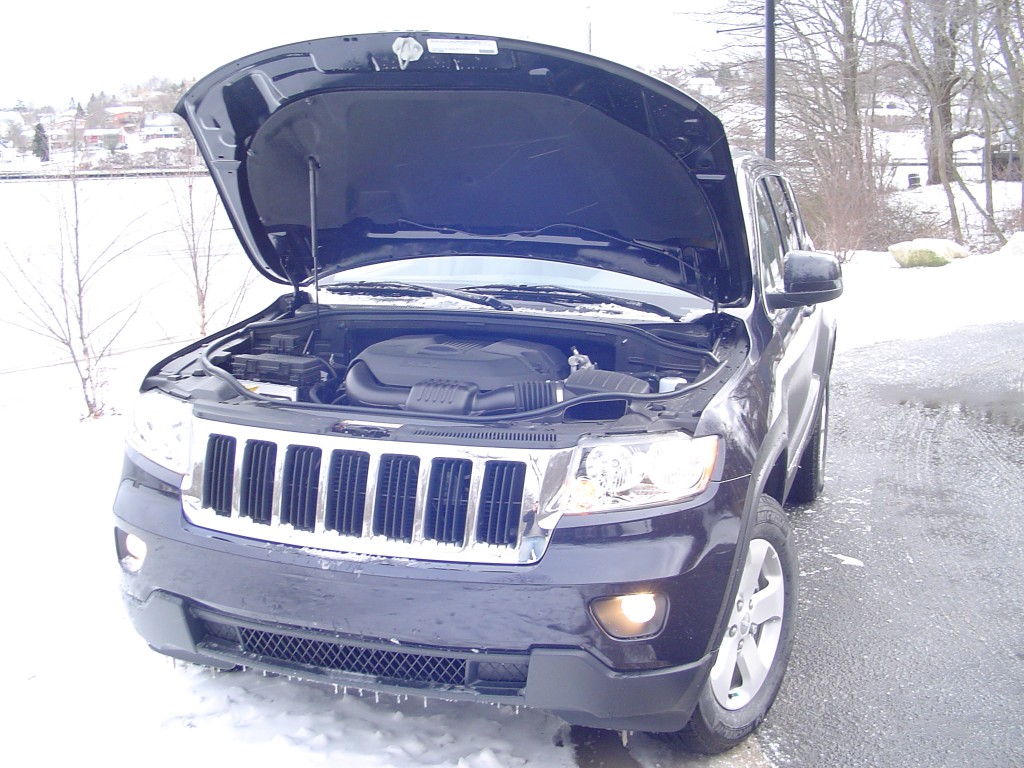 Anyway, there is the optional Hemi V8 which should help out with the sluggishness, however my guess is most people will stop opt for the V6 as it is now capable of towing 1,500 pounds more than before. Not to mention most people won’t be racing in their Grand Cherokees either. But that Hemi probably won’t disappoint like many Hemis before it. 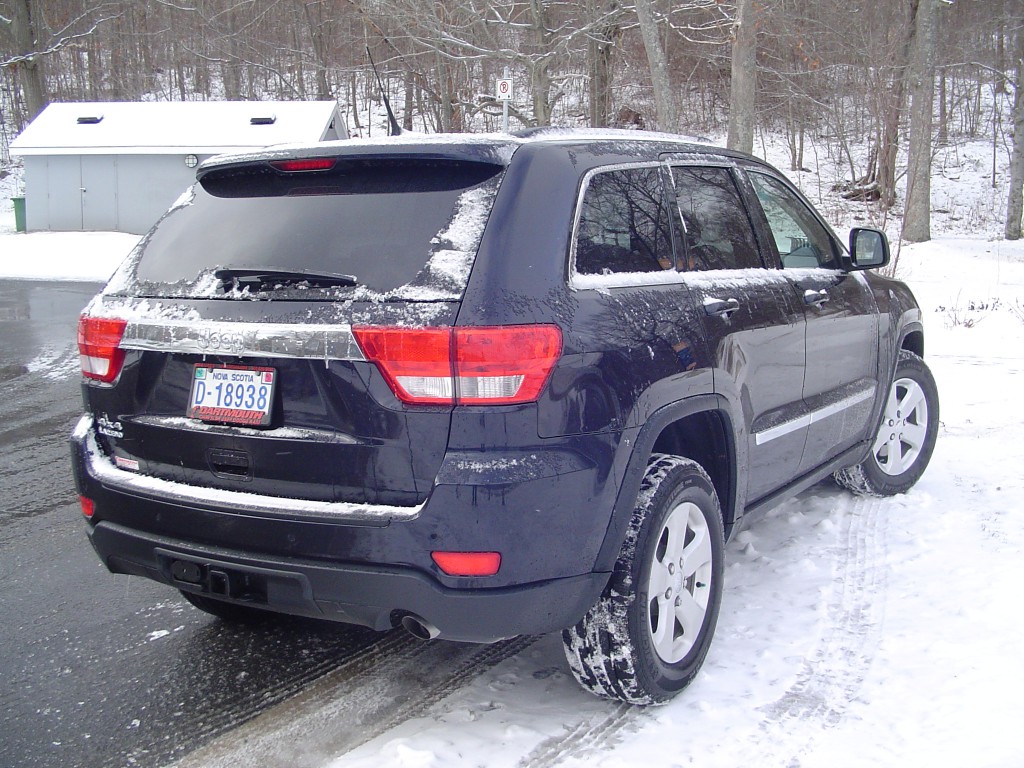 I mentioned that the Jeep’s new engine and gear set up is supposed to help with fuel efficiency, but unfortunately I found no evidence of this. During my time with the Grand Cherokee I returned 17.5 L/100 kms. This is a mix of highway and city driving, however it should be noted that I wasn’t exactly light on the throttle at times because I really was trying to see if I get the most out of that engine. 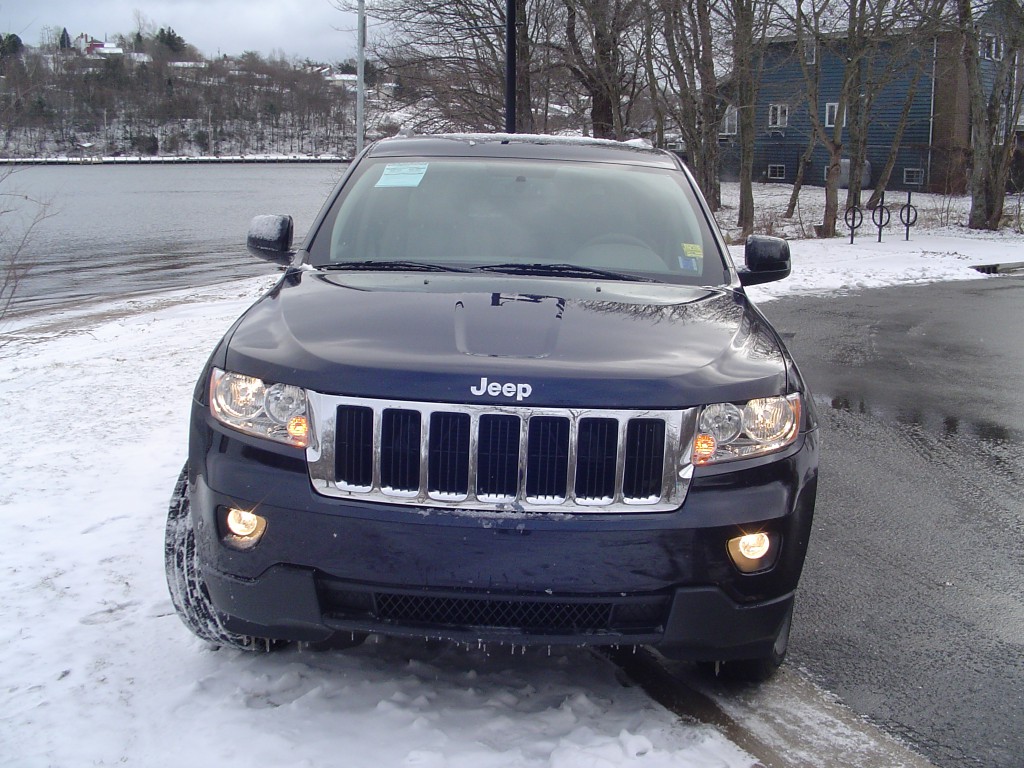 While in the Grand Cherokee you suddenly become aware of how high up you are. No, really, the new Grand Cherokee is really high. I pulled up next to a Range Rover and found myself looking down at the driver. In fact, the only time I was ever able to meet a fellow driver eye to eye was when I pulled up next to another 2011 Jeep Grand Cherokee. Obviously this ride height hinders spirited driving in the corners, but that’s not such a big loss since that’s not what the Grand Cherokee is built for. Besides, there is a setting which allows you to lower the ride height creating a more stable ride, but this is really meant for long distance highway driving. 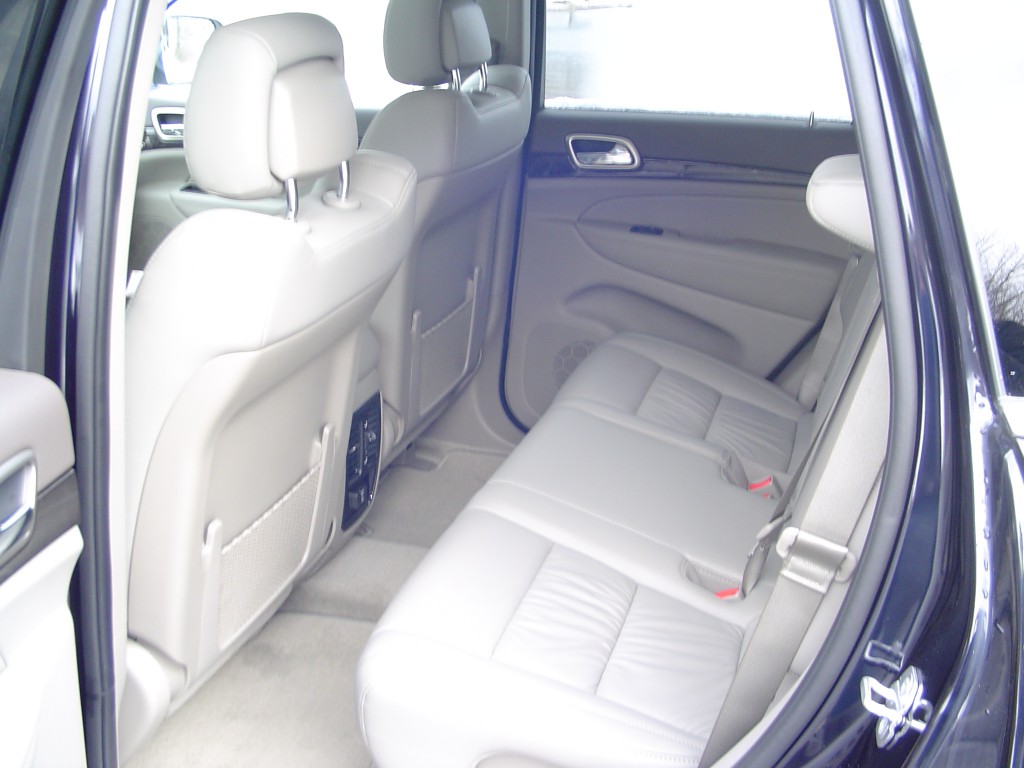 Where the Grand Cherokee completely shines is off-roading. And I can say that with complete confidence after taking it out in about 15 cms of snow. Honestly, I can’t remember the last time I had so much fun in the snow. The Grand Cherokee is right at home in these conditions.  Jeep has now added a very much appreciated terrain select system which lets you choose from snow, sand/mud, rock etc. Land Rover is known for being the first to do it and its good to know the system is now available on a vehicle that costs way less. Anyway, I put it is “snow mode” and tried my damndest to get the Grand Cherokee stuck. I failed miserably. Or should I say, the Grand Cherokee succeeded immensely. You’d be hard pressed to find a better vehicle that can handle off-road elements at this price point. 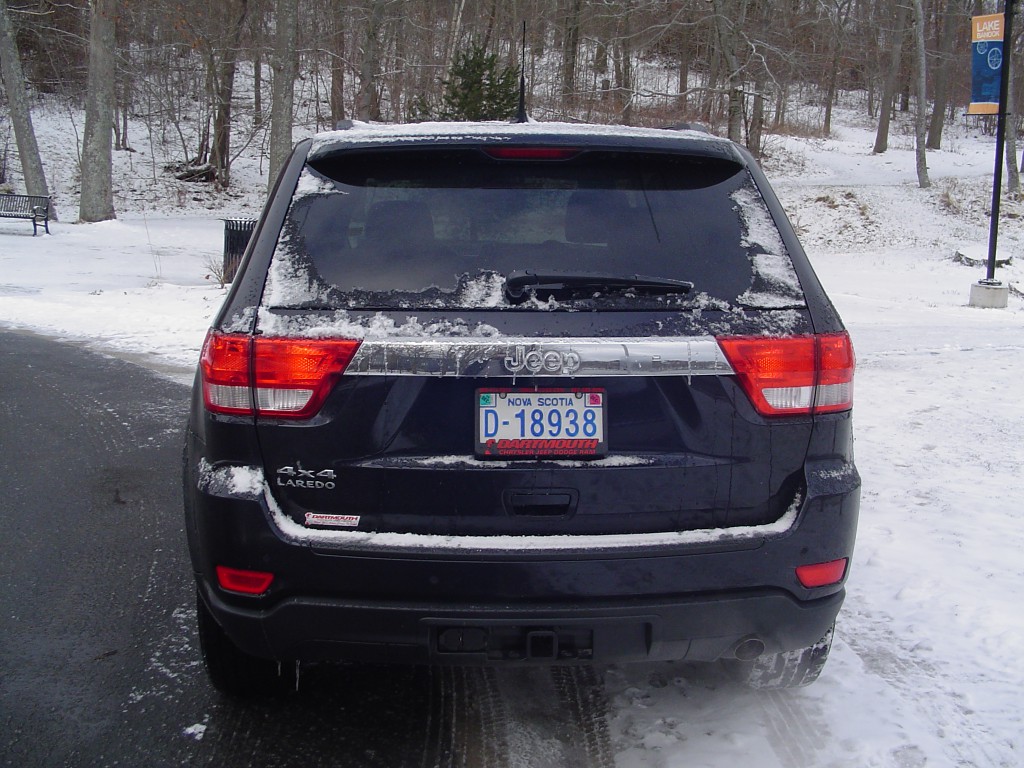 And that’s the thing. Even though this Grand Cherokee is leaps and bounds ahead of the old one in terms of luxury, refinement and style, don’t think for a second that it has become a big lazy soccer mom mobile. The thing that makes any Jeep a Jeep is still there – it is still a Jeep through and through. Drop it in a jungle and it will feel right at home. But thanks to some welcome additions in refinement, you can now drop it in any driveway and it will, for the first time ever, feel right at home as well.

This new Jeep Grand Cherokee is definitely the Susan Boyle of the SUV world. You may not expect much from it at first, but all it will take is one drive to make you eat your own words.