There’s nothing wrong with the Toyota Corolla. It accelerates, stops, uses minimal amounts of fuel and often doesn’t break down. It keeps its value well and it is safe too. That’s likely why so many people buy it.

But with that said, I don’t really understand why so many people buy it.

The Corolla to me is a car without a soul. It’s an appliance. A potted plant. A paper weight. There’s nothing particularly interesting about how it looks, and more importantly, there’s nothing alluring about the way it drives.

Now, I’m not necessarily criticizing the Corolla here. I recommend it all the time to friends and co-workers alike because as a car, by definition only, it’s quite good. 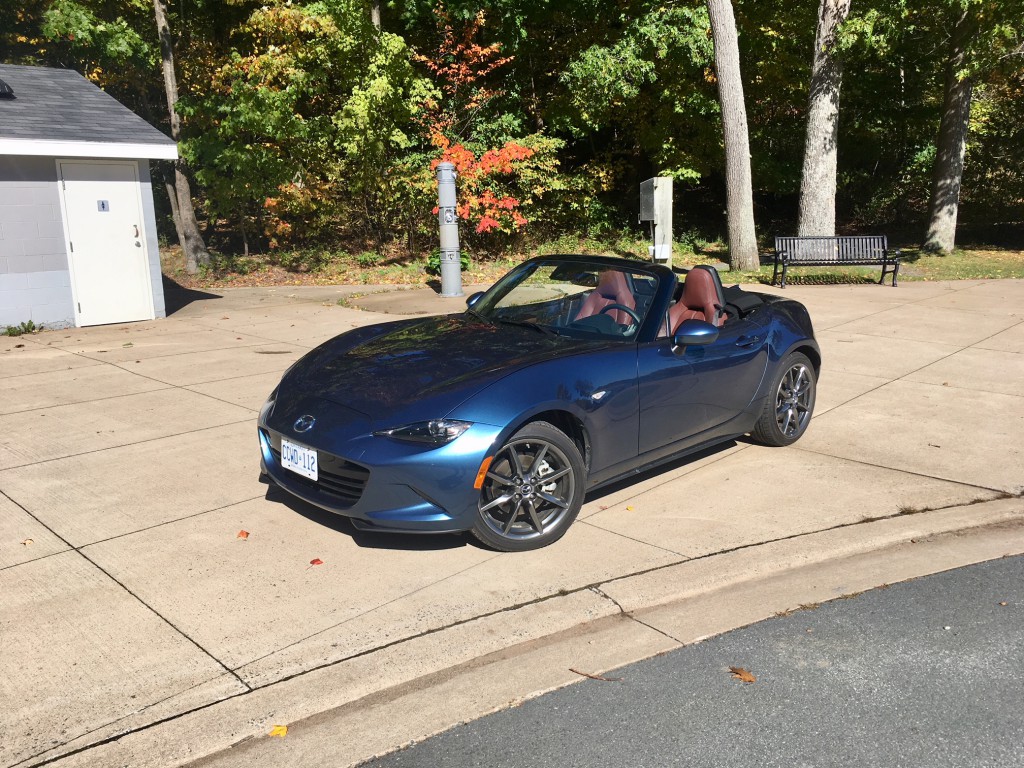 I drove the previous generation MX-5 and said:

There’s something special about this car that’s hard to pinpoint. It just makes you feel happy. It’s hard not to drive it without a grin on your face (which I can imagine looks a bit of a ridiculous sight to see a smiley faced car driven by a smiley faced driver).

Three years later I would drive the MX-5 again, this time the brand new (and current) generation. Back then I said:

It’s so satisfying to drive that you’ll often find yourself looking for excuses to drive it. I  found myself texting my friends asking them if they needed a drive anywhere. I would convince myself that I was running out of toothpaste and needed to go buy some more even though there was still half the tube left. I would purposely take the long way everywhere I went.

The next year, I tied the hard-top version:

Throw the MX-5 into a corner and it’s only too happy to oblige… It’s not particularly quick, but it doesn’t have to be. It allows you to have boat loads of fun within the confounds of the law. Overall the MX-5 feels balanced, surefooted and nimble; exactly what a roadster should feel like. 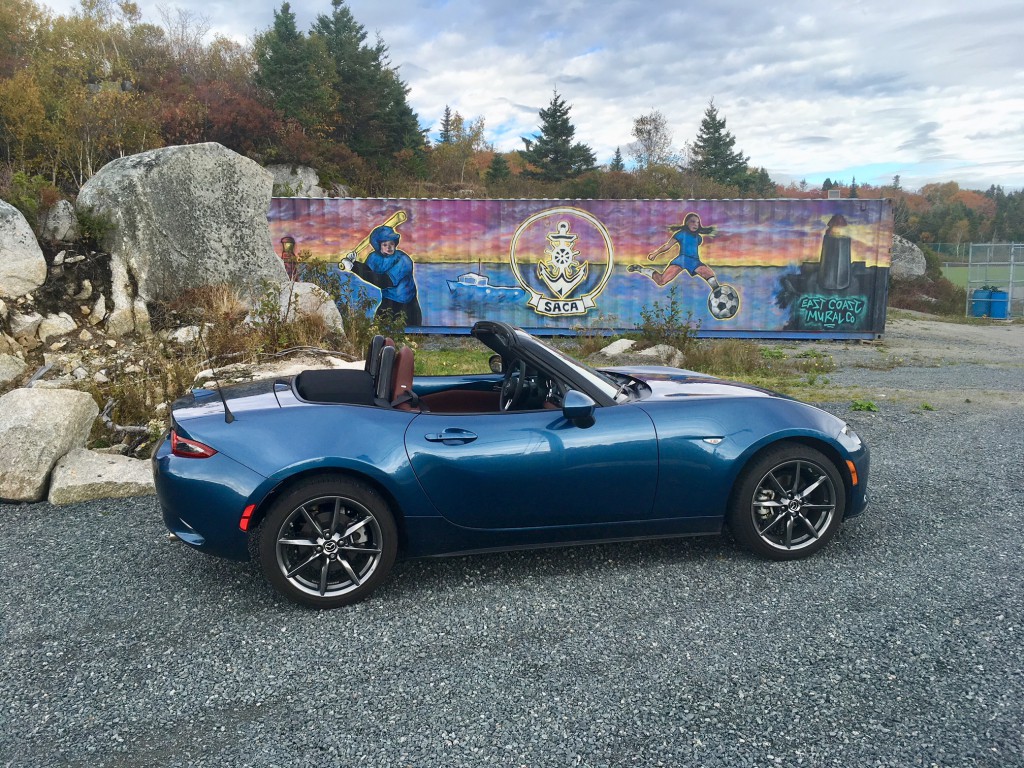 So, suffice to say the MX-5 is decidedly un-Corolla like in many ways. But let’s take a look at my last thought there: It’s not particularly quick, but it doesn’t have to be.

Many people have yearned for it to be so with the MX-5. Well, for 2019 Mazda has given to us what many people thought was lacking in the MX-5: MOAR POWER! 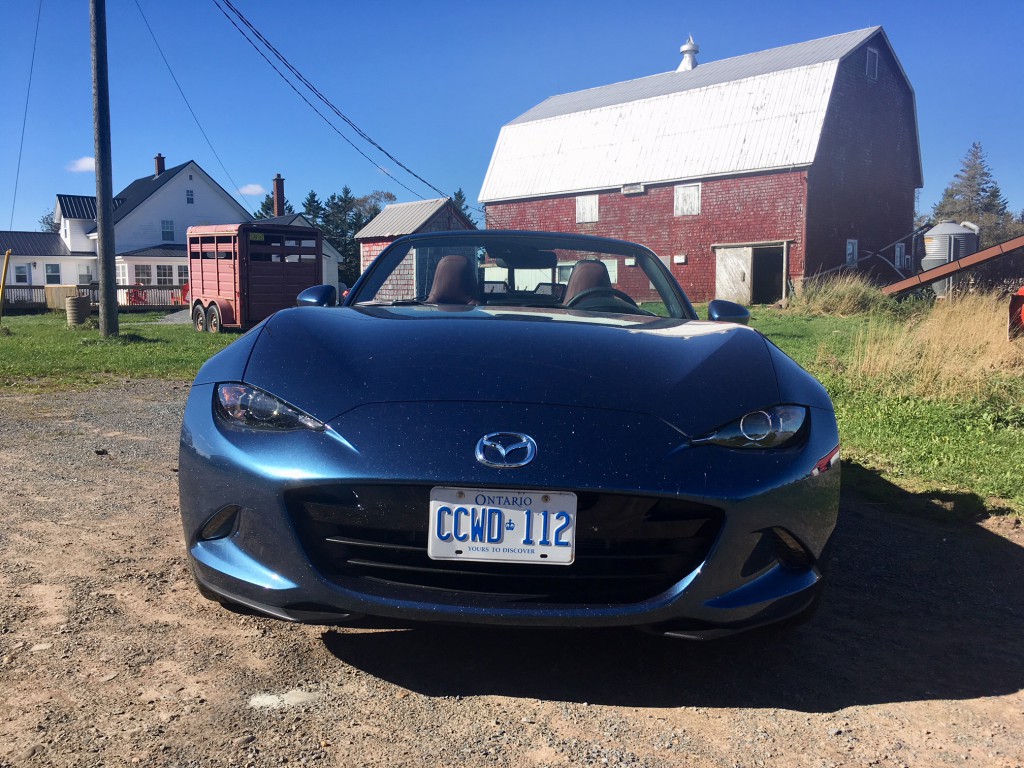 I won’t dwell too much on the exterior looks as it remains largely unchanged since it was introduced for the 2016 model year. Though here’s a hot tip: the only way you can visually identify a 2019 MX-5 from a 2018 is at the rear where there is now a back-up camera visible. Otherwise it’s the same shape that you’ll either love or hate. Regardless of your point of view, the MX-5 gets attention everywhere it goes and, on a note of personal preference, my tester’s Eternal Blue Mica paint looks fantastic in the sun. 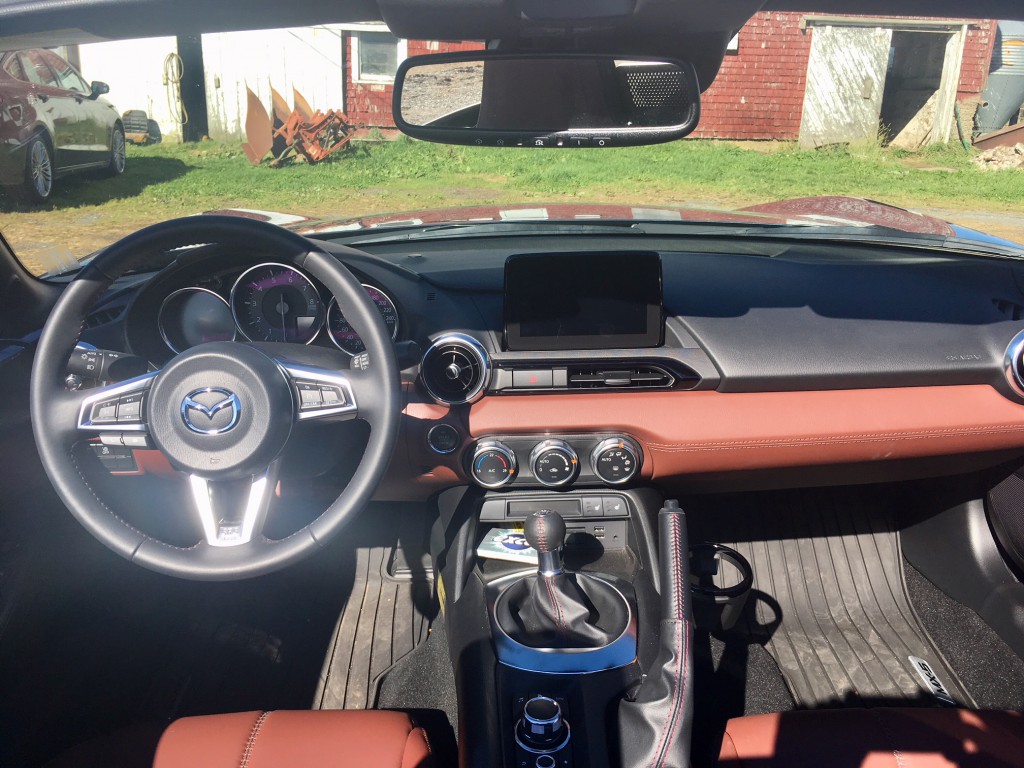 Inside, the experience is still sardine-in-a-can. There’s no getting around it, space is tight which makes getting in and out an undignified experience at times. The good news for 2019 though, is you’ll likely be able to get a more comfortable seating position thanks to a steering wheel that not only tilts, it now telescopes for the firs time. My 6 foot frame (okay okay, 5 foot 11 and a half), was able to get a decently comfortable seating position. There’s removable cup holders but no matter where you place them they always seem to be in the way (best to store them in the cubby between the seats – there’s no glove box). 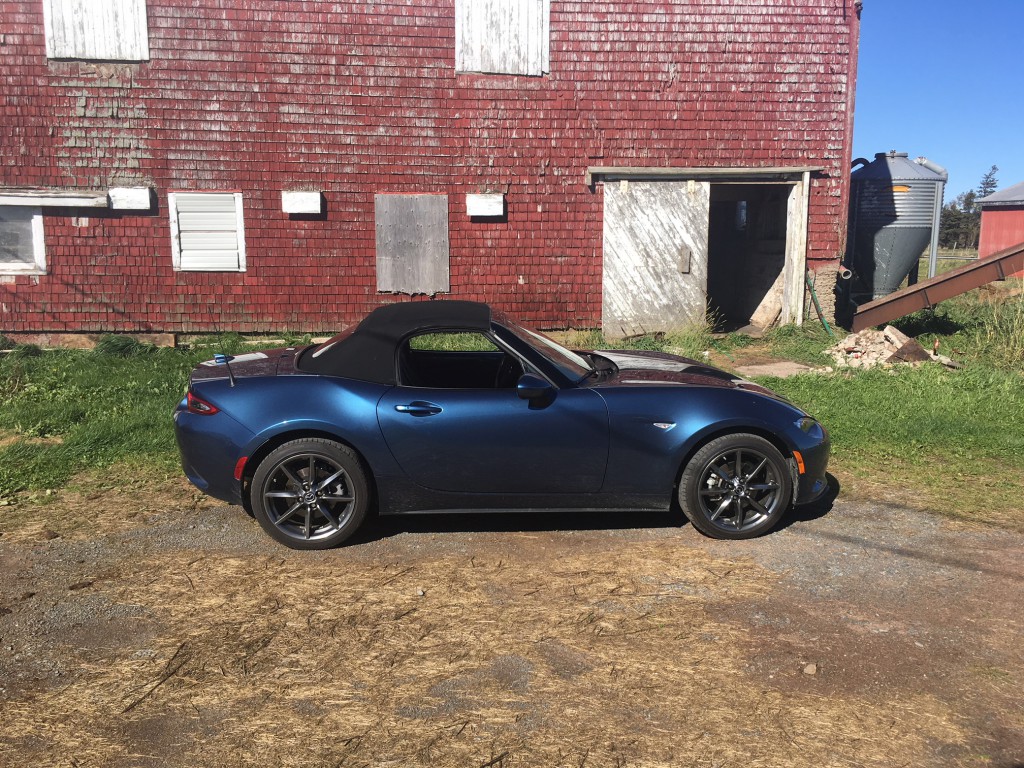 My top of the line GT trim came with nice light brown leather seats which are both comfortable and supportive. The driver gets speakers integrated into the head rests. The end result is an experience that enhances – not deafens.

Trunk space is not impeded by the soft-top when it is retracted so there’s a decent amount of room for an overnight bag or two. It will certainly do the trick for a quick grocery run. 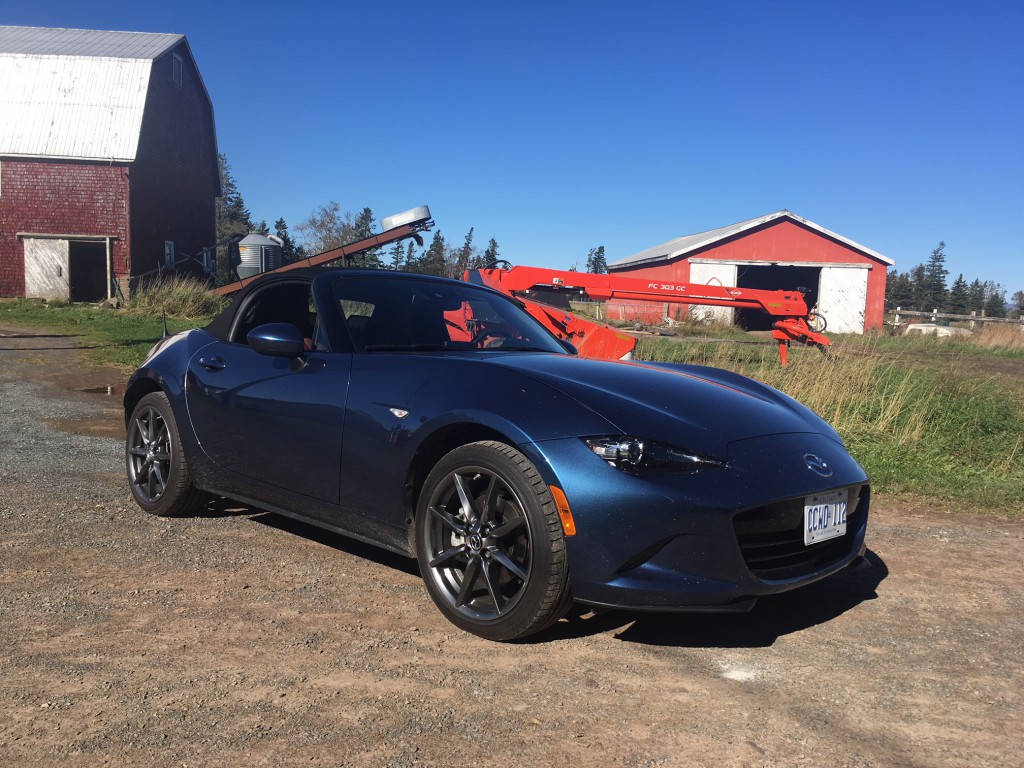 Let’s get to the engine because for 2019 it is the biggest story by far. The updated 2.0 litre SkyActiv naturally aspirated four-cylinder now produces 181 horsepower and 151 pound foot torque. That’s a significant power gain from the 155 horsepower and 148 pound foot torque produced from 2016 to 2018. A six-speed manual is still available as is an automatic, but don’t be foolish. Get the manual. It is simply amongst the best manual transmissions currently in the business, which I suppose isn’t saying much these days since manual transmission options are about as plentiful as the red-crested tree rat species (look them up, they’re pretty cute. But the point is, they’re near extinction unfortunately). 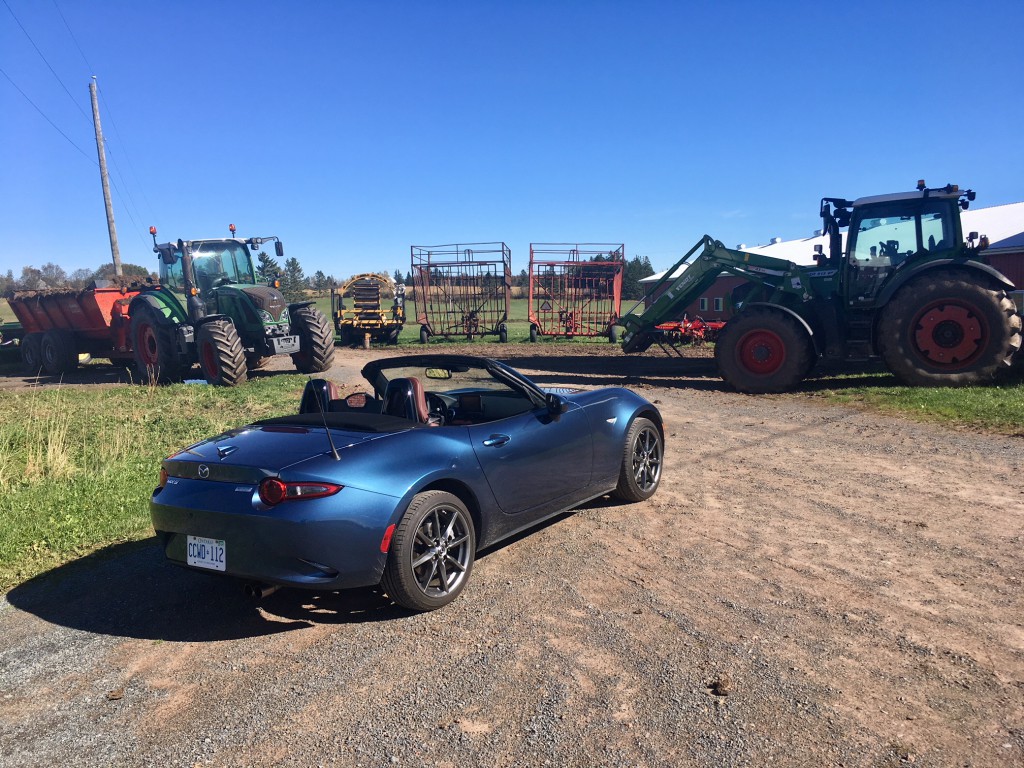 The end result is a car with a noticeable increase in oomph, though that power is largely felt at higher RPMs. If you drive the MX-5 around town normally, the added power won’t be as apparent. It’s not an improvement that will turn the MX-5 into a drag race superstar (not the Ru Paul kind of drag race), but it gives a bit more leeway to those of us who experience bursts of testosterone behind the wheel every now and then. Considering how light this little roadster is in the first place, power is certainly on tap when you need it more often than not. On top of it all, with the new power comes a new exhaust note which promises to be deeper and less buzzy. To be honest, I couldn’t really tell much of a difference, though that could just be my goldfish memory coming into play. 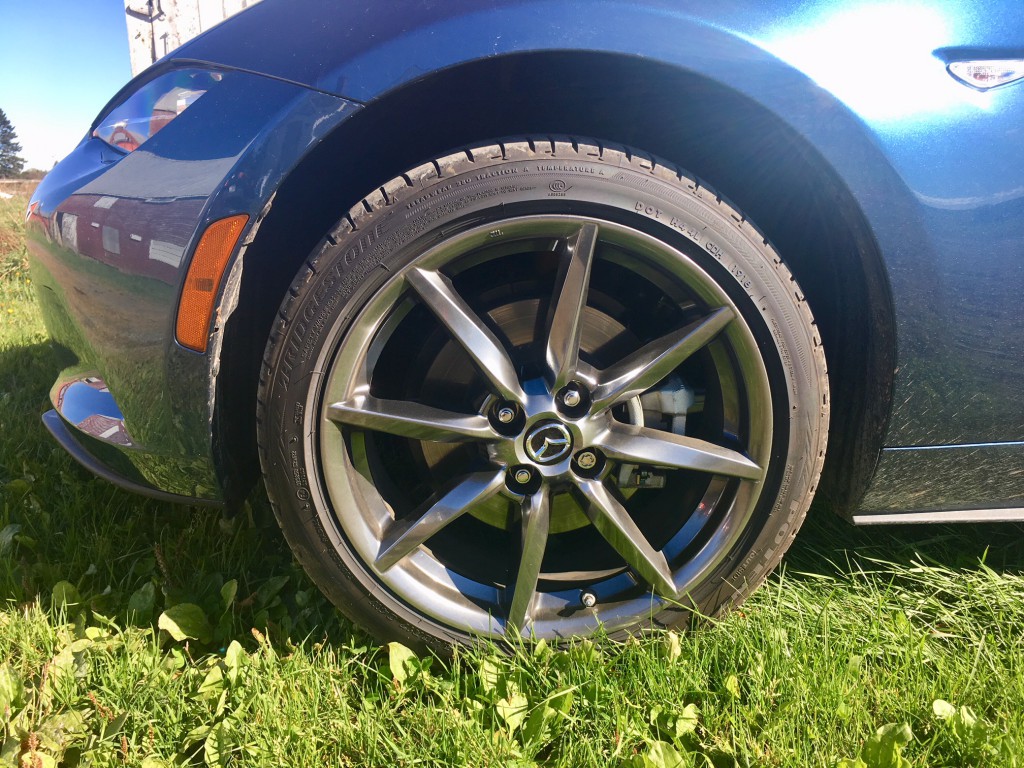 Could the MX-5 use more power? I certainly wouldn’t say no. But the MX-5 now feels as if it has the power it always needed. This is how much power the current generation MX-5 should have debuted with. 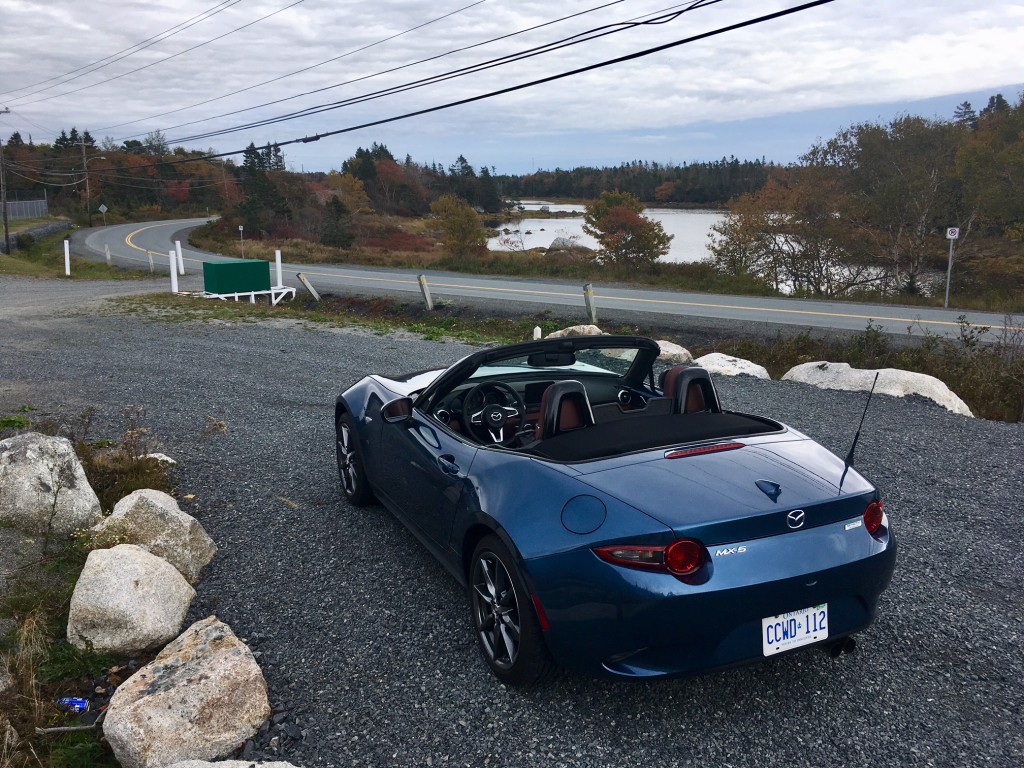 But even with the increased power, the MX-5 takes no penalties at the pump. It is rated at the same 9.0 L/100 kms city and 7.0 highway ratings. Admittedly, if you opt for the automatic, you can get a better highway rating of 6.6 (but no, seriously, get the manual). My real world testing after a week’s worth of driving in both city and highway delivered 7.6 L/100 kms. To put that into perspective, our beloved Toyota Corolla gets a 7.5 combined rating. So they both use about the same amount of gas, but guess which one is more fun to drive. 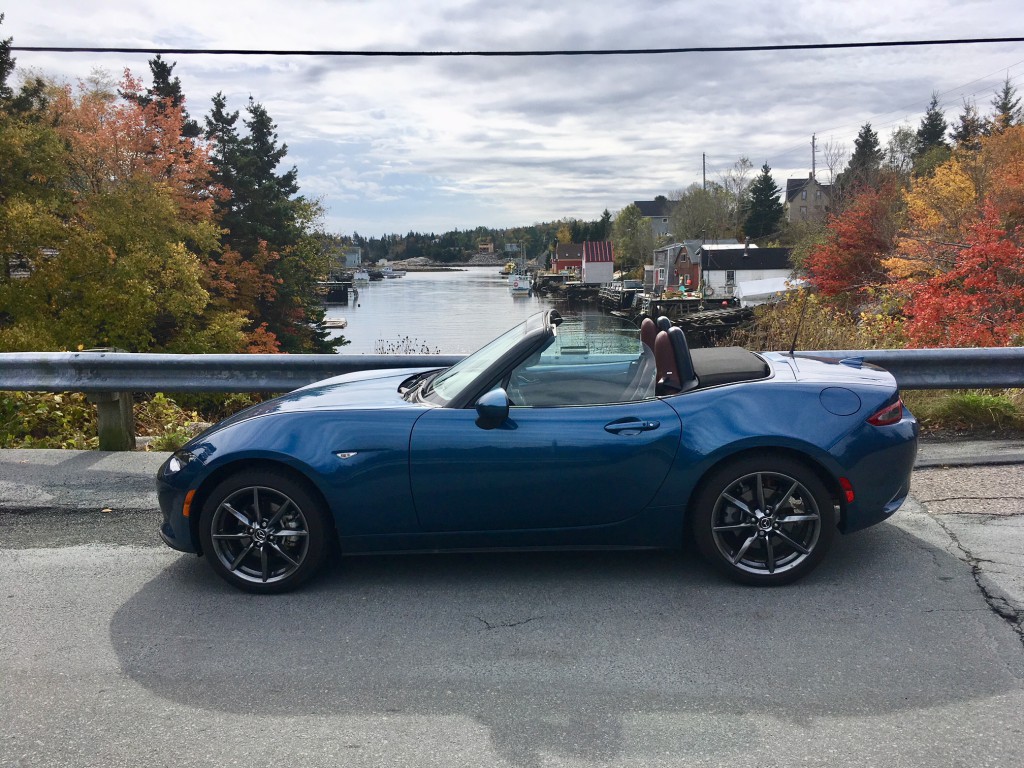 Mazda likely left the MX-5’s handling abilities alone because in truth, they never really came into question. It’s a car that was built to be fun in the corners. I have always complained about the amount of body roll (admittedly, completely manageable body roll) but the MX-5 can be thrilling around a bend at any speed. There’s something immensely satisfying about how it takes a corner and indeed how it handles the drive in general. 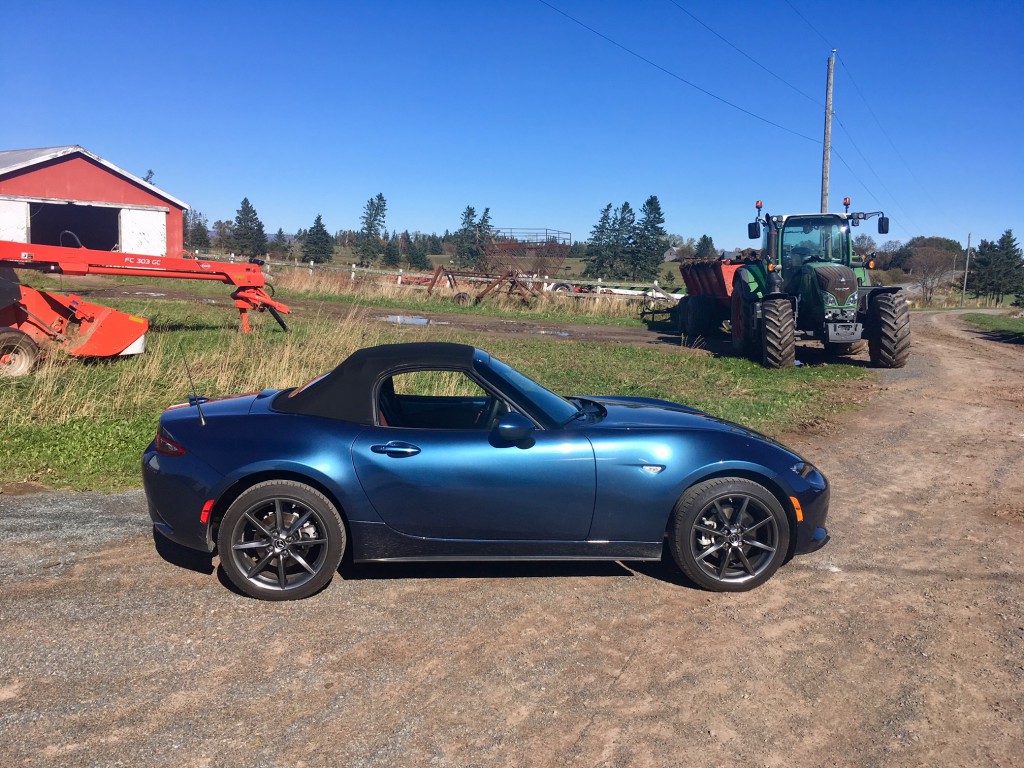 My GT tester lacked the optional sport package available on the mid-range GS. To be honest, I didn’t miss it too much. Maybe I’m just starting to get older, but I appreciated the added comfort of a non-performance set up most times. The MX-5 is far from a refined luxury ride, so the added comfort was a bit of a bonus.

When I drove the 2016 model year, I had driven it to local a car meet. While there, I met a girl.

A year later, I had a 2017 model year MX-5, though this time it was the RF model (hard top). At that time, that girl I met a year earlier had become my girlfriend.

This time around, for the 2019 model year, that same girl is now my fiancee.

The MX-5 was there at the beginning of my relationship and like that very same relationship, it continues to grow and blossom into something remarkably special. 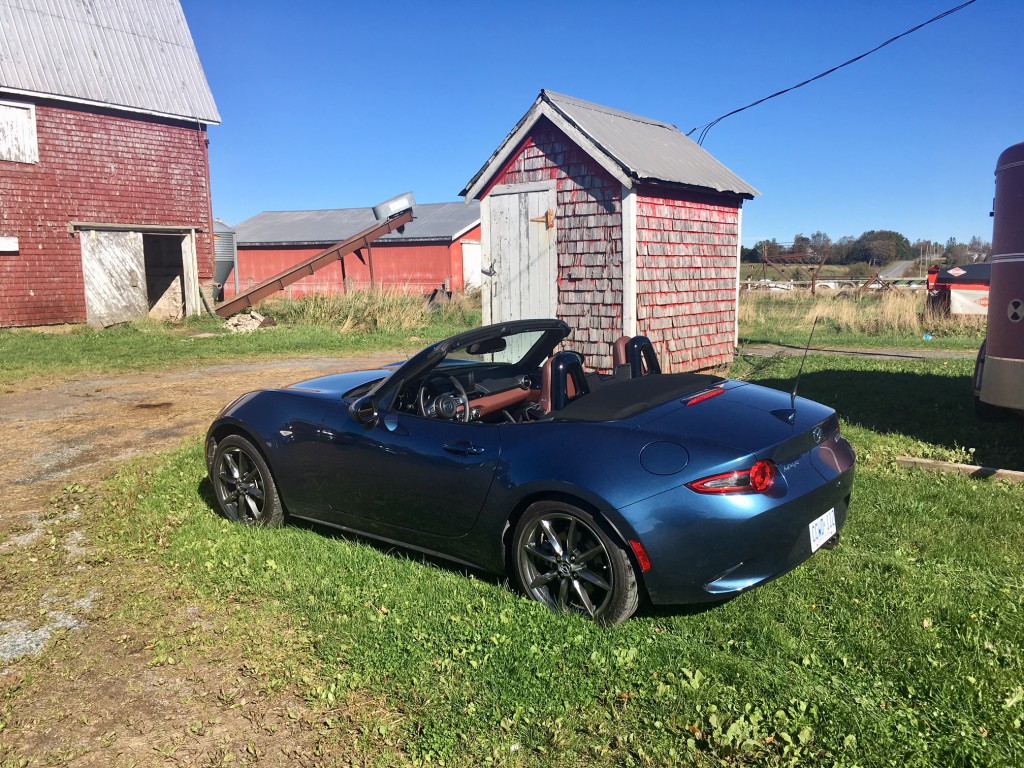 That’s why the MX-5 is a special car to both of us. In fact, that car is so meaningful to us, that my fiancee and I decided to take it for a late night drive, with the top down, in 10 degree weather so we could experience the nostalgia all over again. It even started to rain during our drive, but we didn’t care. We cranked the heat and kept the roof down anyway. We were, and continue to be, so happy. The experience made us feel all warm and comforted inside as if to say: this is perfect. 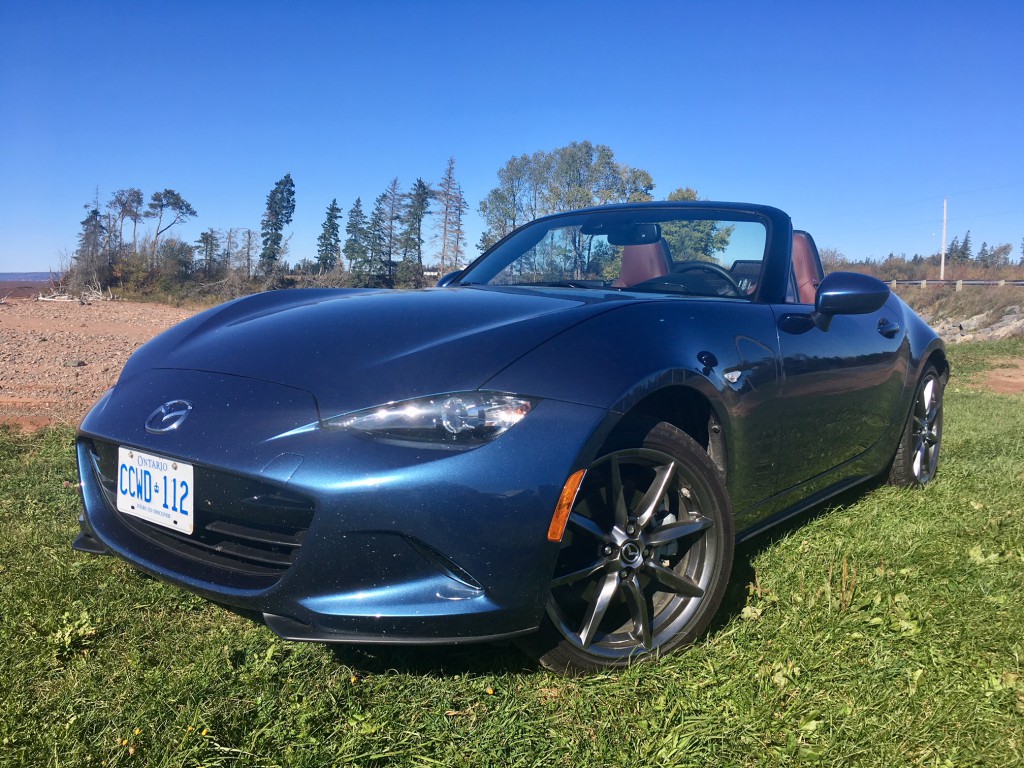 That is what a good car does. If you ever find a machine that can invoke as much passion and emotion as the MX-5 does for me, then screw your savings. Go buy it. Life is too short.

As for the MX-5, I’ll one day put my money where my mouth is and have one of my own, I’m sure.