I’m not a fan of convertibles. I just don’t understand them. Why would someone want to expose themselves to the elements and to the judgmental stares of others? Besides, the majority of people look awkward in convertibles. Either they are clearly in mid-life crisis mode, or are unaware that their hair has gotten whirled around in the wind so much that they look like they just came from the 80’s.

Then there’s the way they drive. A lot of people don’t understand that taking the roof off a car rather spoils it from a performance perspective. It loses its rigidity. Think of it like a shoebox without the cover on it. Without it, the box is wobbly. Put the shoebox cover on and the box is more solid.

So taking a corner in a convertible makes for lots of unnerving wiggles and leans in the suspension – so much so that it frightens you.

And then there’s the impracticality of convertibles. You get less space than you would in a sedan or a coupe and most convertibles aren’t exactly year-round vehicles. So depending on which part of the country you live in, you may get to use your convertible ten times a year if you’re lucky.

All this meant that the MX-5 I was getting this week was going to have itself a tough sell. Now approaching the end of its lifecycle, Mazda sent one out as one last hurrah before the new one (rumoured to be co-developed with Alfa Romeo) bows.

Is all the pedigree and hype surrounding the MX-5 really worth it? 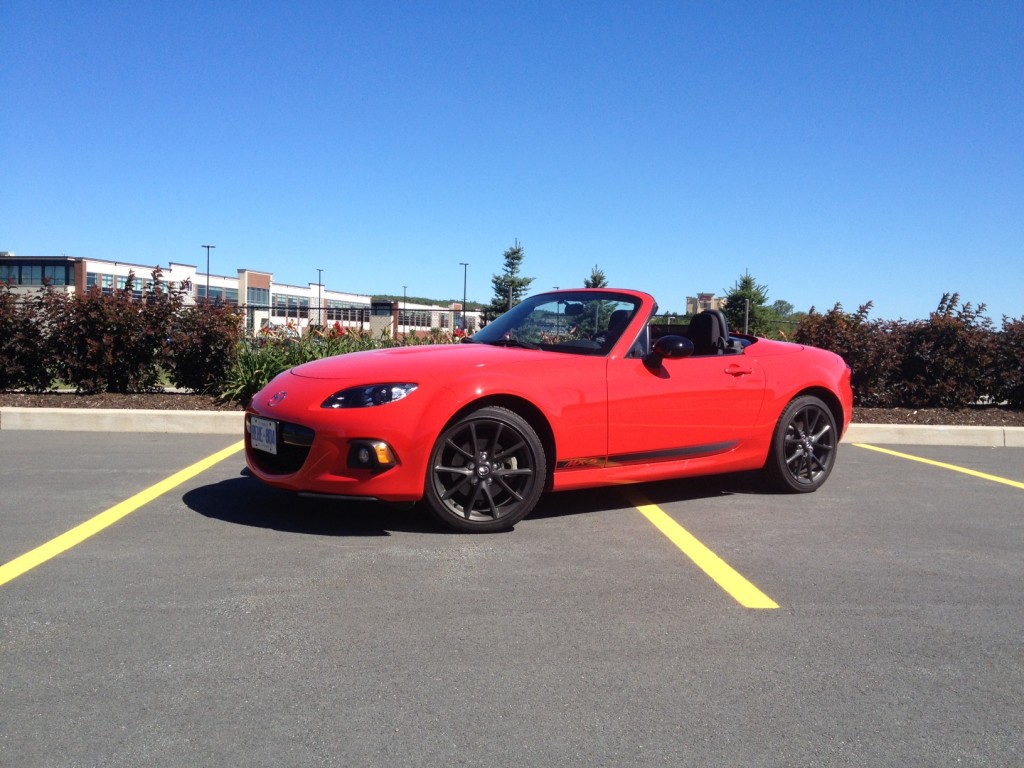 Mazda sent the mid-level GS trim which means it came with rather attractive looking gunmetal 17 inch wheels and screaming red paint. They also checked off the hardtop roof option in black as well. That, matched with some black MX-5 decaling on the sides and black headlamp bezels made for one pretty sharp looking roadster. I found with the top up, it looked a bit awkward from certain angles but whether the top was up or down, it generated a lot of stares. I suppose this is a good thing since that’s part of the reason why people buy convertibles: to get noticed. One criticism of the original Miata was that it looked too much like a girl’s car. Whatever that means. So when Mazda redesigned it back in the mid-2000’s they made it four inches longer, two inches wider gave it some flared wheel arches and poof – suddenly the MX-5 looks a bit more masculine. Even if it does have a front end that looks like a smiley face. 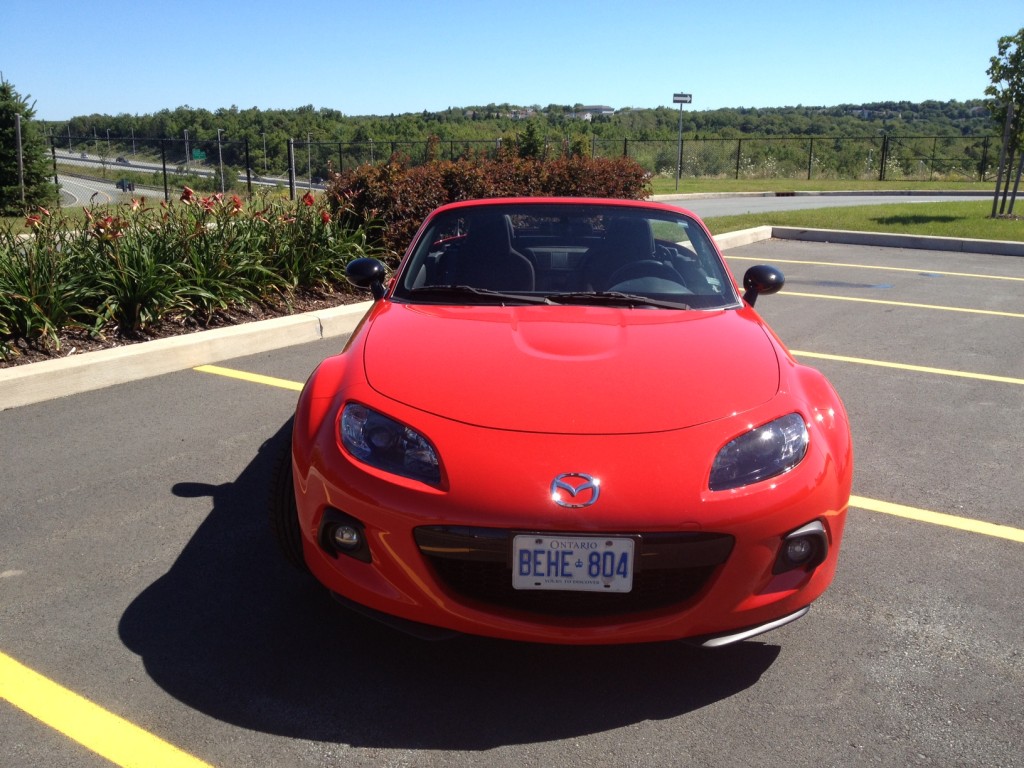 Inside, you can tell that this car was designed in the mid-2000’s as well. The interior design and layout looks dated, however it’s almost refreshing. I know that’s oxymoronic, but every single press vehicle I get these days is equipped with a thousand buttons, 10 inch display screens, three tiered dashes and touchscreen everything. It was nice to have a simple layout where you knew what each button did and they actually responded to your commands when you pushed them. As I type this, I’m very much becoming aware that I’m now reaching the ‘back-in-my-day’ age. But I’m sorry, the simpler everything is to operate, the more time you’ll have to actually drive the car rather than sitting in your driveway taking ten minutes to figure out how to change the radio station before you set off. Anyway, I digress. 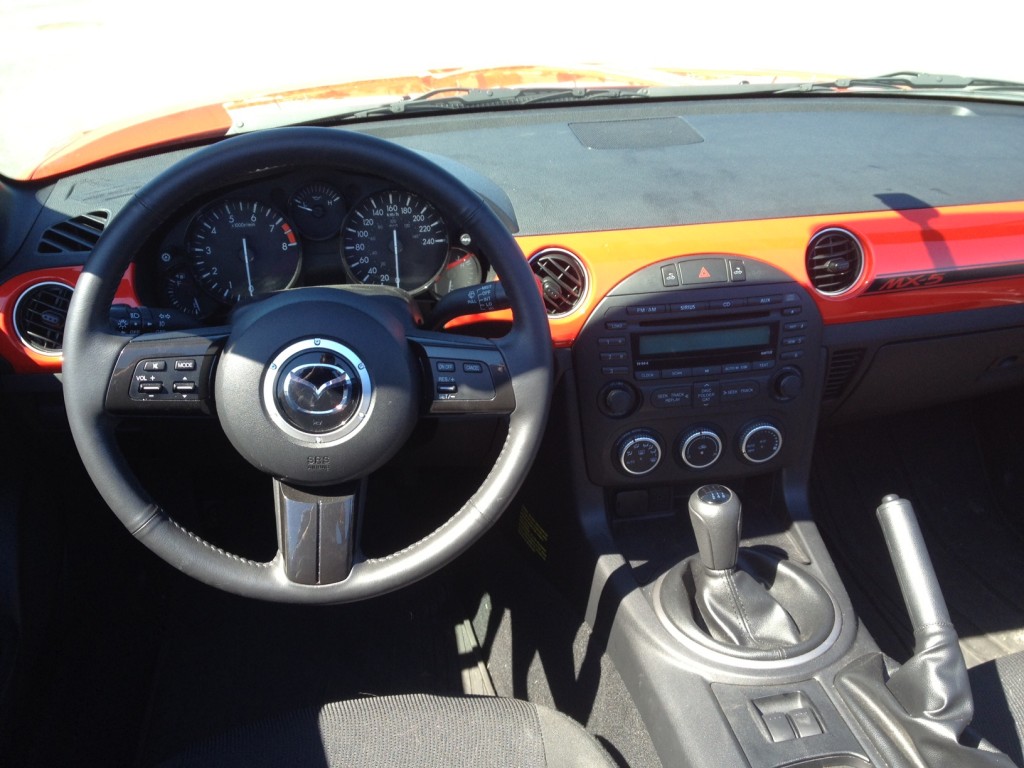 As you can imagine, space is, let’s say limited, and those who are over 6”3 may have a hard time getting in and getting comfortable. Trunk space is also limited, but the good news is that cargo room stays constant whether the roof is up or down since the roof does not retract into the trunk. There’s also a lockable cubby hole in between the seats which is nifty in case you are making a short stop somewhere and don’t want to fold the roof back up. I mostly used it for my sunglasses, but it’s big enough to carry larger items and small bags. 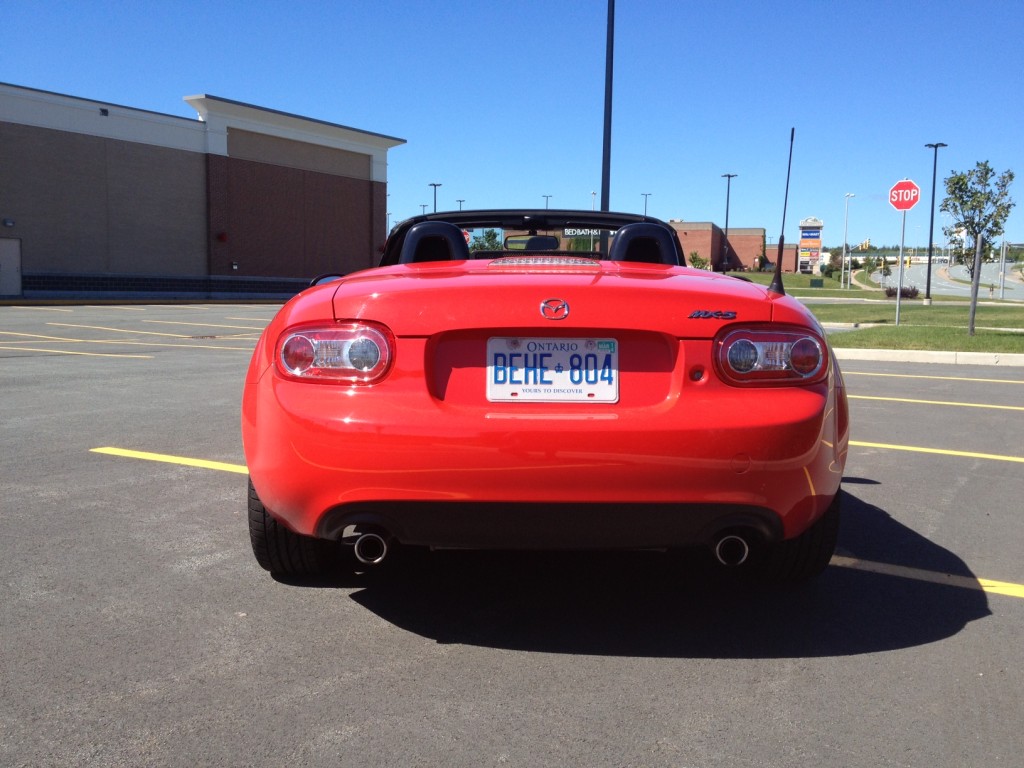 The MX-5 gets a 2.0 litre four cylinder engine making 167 horsepower and 140 pound foot torque. Those sound like small numbers but given this is a small car it’s more than adequate. The 0-100 sprint is just under 8 seconds, and again, while that doesn’t sound too impressive, the MX-5 definitely feels adequately fast. And that exhaust note probably helps induce that feeling, it sounds great. It’s been a while since I’ve heard a decent exhaust note from a naturally aspirated engine and it’s one of the main reasons why I enjoyed putting the top down.  The MX-5 is also a bit of a screamer with its 7,300 RPM redline. The gearbox is quite good, throws are short and direct and the steering is nicely weighted and direct as well. 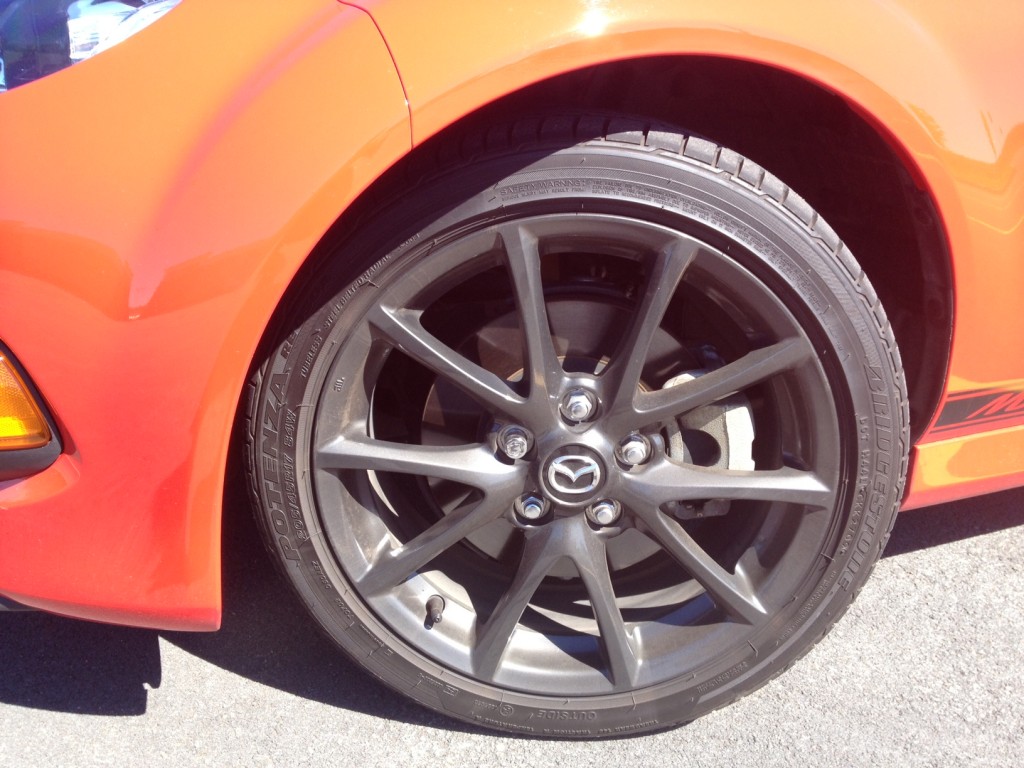 Handling is also one of the MX-5’s forte’s. Given the short wheelbase, the MX-5 is completely tossable into any corner. However there’s one unexpected issue: body roll. I didn’t expect the MX-5 to have such noticeable body roll but there it was. Oddly enough, it didn’t really take away from its handling abilities. It did at first because the body roll is a bit unnerving, but once you get used to it, you realize the MX-5 is quite a capable little track star. If you were going to take it to the track, however, I’d probably invest some extra dough into the suspension. On normal roads though, that’s not necessary. In fact the looser suspension makes the MX-5 pretty agreeable as it makes for a smooth and comfortable ride over bumps. 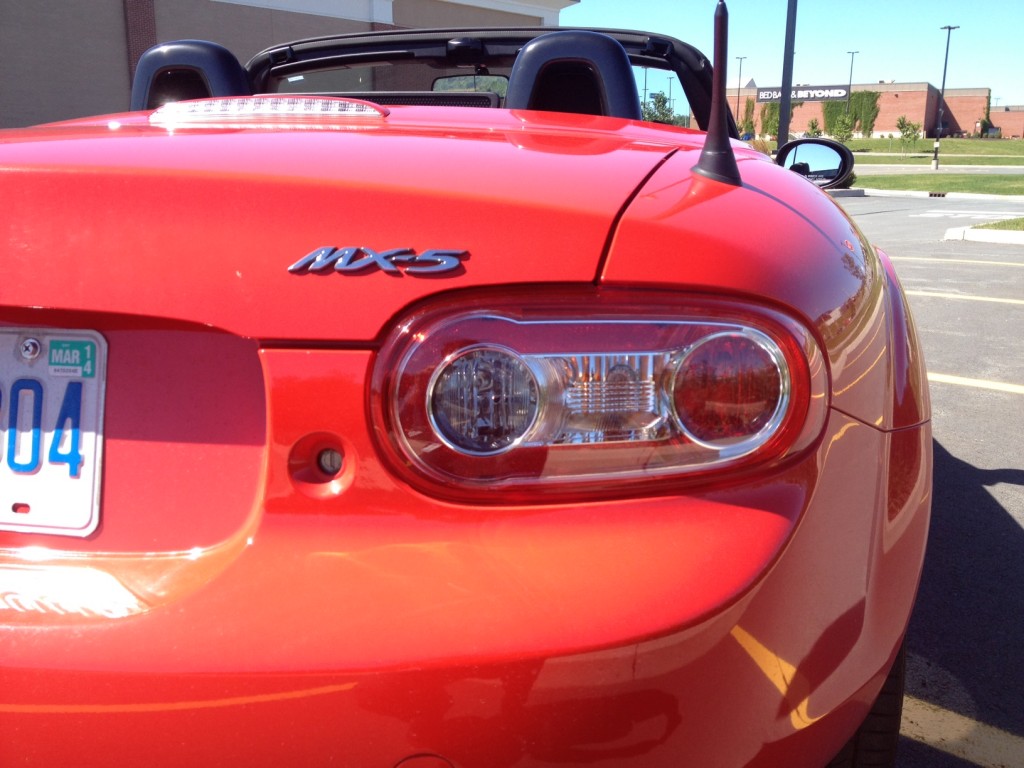 In terms of fuel efficiency, the MX-5 is rated at 9.7 L/100 kms in the city and 7.1 L/100 kms on the highway. I averaged 10.1 L/100 kms in mostly city driving and, considering a fair amount of that time was spirited driving, I’d say that number is actually pretty decent.  As you can imagine, the MX-5’s tank is fairly small so even when you are nearing an empty tank, it still only takes about $40-$50 to fill. 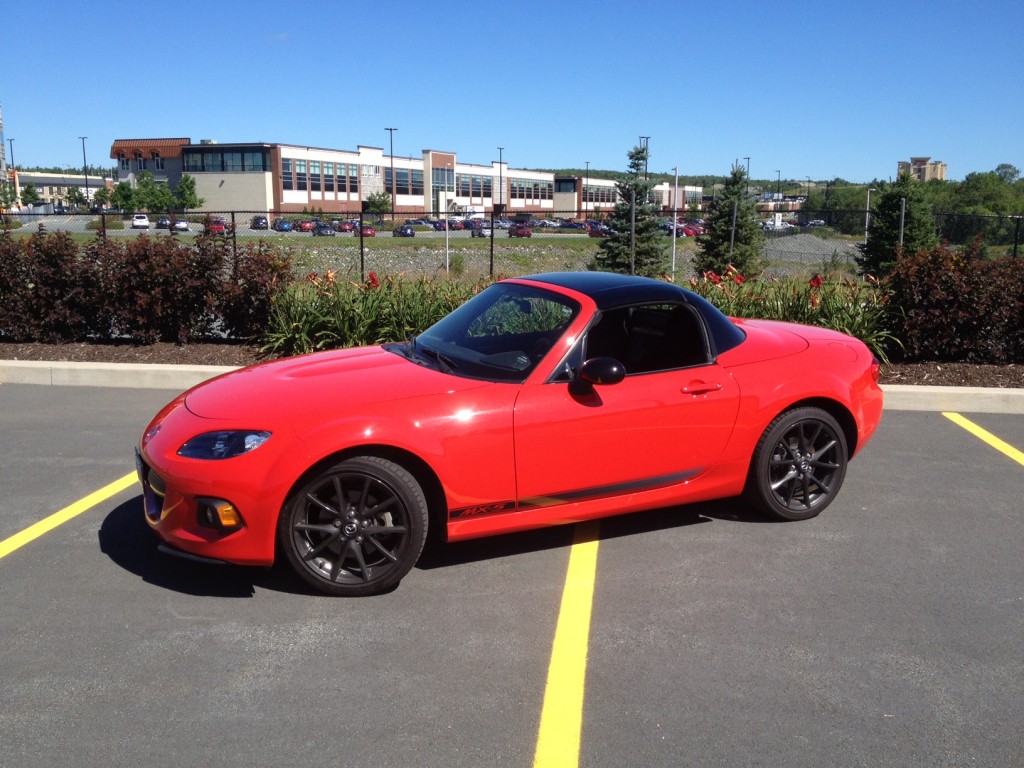 By the time my week had come to an end, I realized something. I didn’t hate this convertible. In fact, I didn’t want to part with it. Despite all the flaws I mentioned about convertibles in the intro, I still wanted to drive it. There’s something special about this car that’s hard to pinpoint. It just makes you feel happy. It’s hard not to drive it without a grin on your face (which I can imagine looks a bit of a ridiculous sight to see a smiley faced car driven by a smiley faced driver). While I still feel that convertibles on the whole are not worth the extra dough, this one definitely is, partly because it is a bargain in the first place. Aside from the Mini Cooper Roadster, there is no other two seat convertible to be had at this price – the other roadsters available can easily double its price. All of this means that I now I understand the pedigree of the MX-5 and now I understand why owners meet in droves to talk and bond over them. 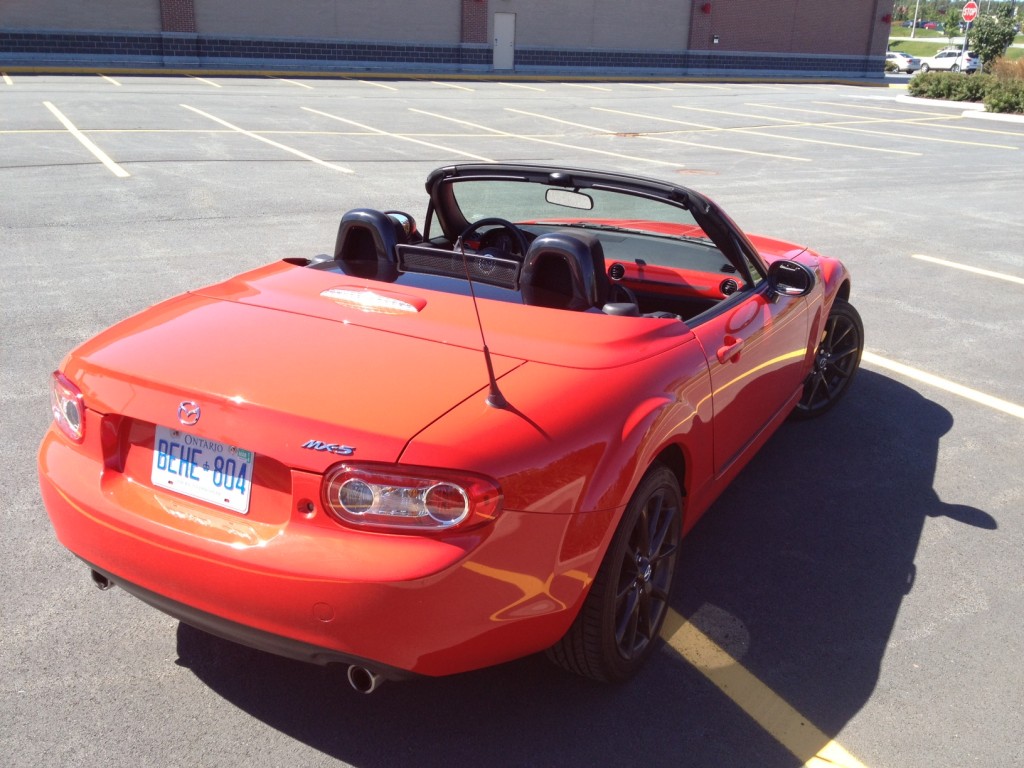 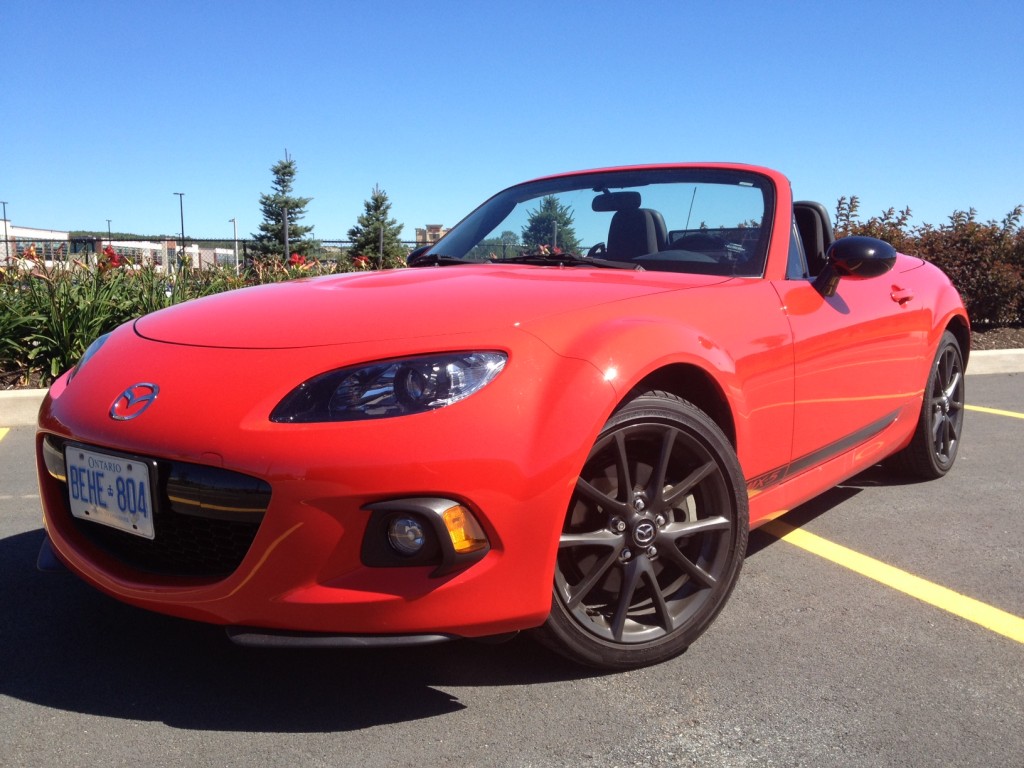