You only have to look at the current automotive market trends to know Kia might find themselves in a bit of a pickle in the near future.

It’s in plain sight: people are ditching mid and full-size sedans in favour of SUVs and crossovers.

Currently, Kia has three mid or full-size sedans in their lineup. To top it all off, they only have one mid-size SUV to choose from.

So what did Kia go and do? They added a fourth mid-size sedan to the lineup.

Well actually, ordinarily this would be a bit of a head-scratcher, but considering what this latest sedan means for the brand as a whole, it may actually turn out to be a nifty idea.

Before I get to that though, let’s take a look at the product itself, known as the Stinger. To fans of The Wire TV series, no it isn’t called the Stringer, though the Stinger did recently get top honours as the vehicle people tend to misspell most. 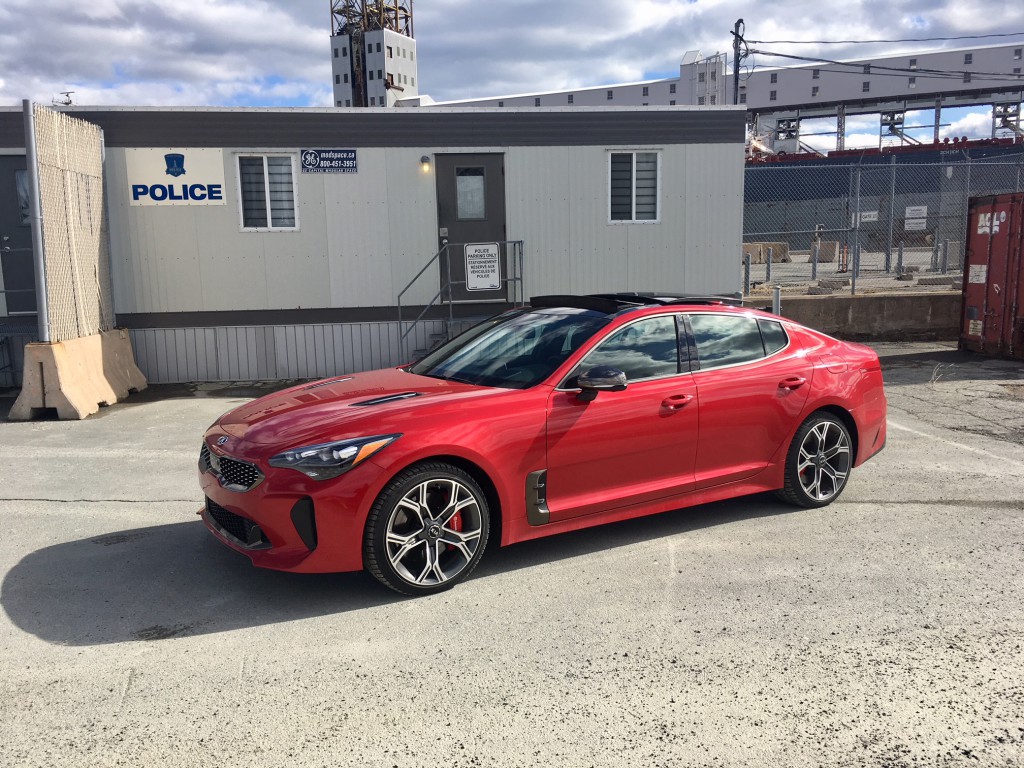 There’s plenty to talk about regarding the Stinger, but let’s start with the thing locals wanted to discuss most during my time with it: its style. This is easily the best looking car Kia has produced to date (and they’ve been making decent designs lately in general), however, I’m not entirely sure all credit could go to the Korean automaker. Several people, including myself, see Maserati-like design cues, especially in the rear where the tail light design does a decent impression of the tail lights found on a Maserati Gran Turismo. If you’re going to be inspired by another company’s style, no one would fault you for looking to the Italians. The side profile is sleek and blends a bit of Aston Martin here, and a bit of Karma Revero there. Even up front, you can see some influence from the latter. Of course, Kia added its signature tiger-nose grille and usual corporate styling cues to ensure some consistency with the rest of the lineup. But as far as styling goes, I’d say it’s a home run. 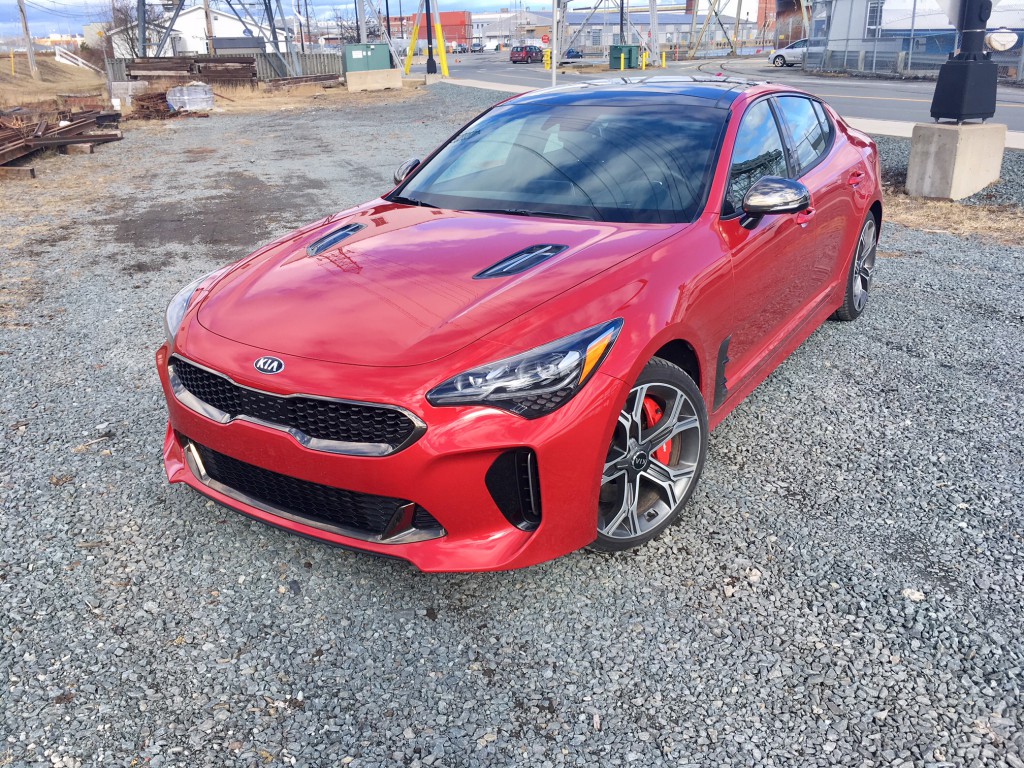 The interior doesn’t take many cues from the aforementioned higher end brands, but that isn’t to say it feels baron – quite the opposite. The three circular vents planted right in the middle of the dash are eye-catching as is the brushed aluminum accents. The Stinger gets a flat-bottomed steering wheel along with a dial behind the gear lever which changes drive modes. Quality of materials is top notch. While Kia didn’t completely mimic the interiors of its other models, everything is still quite familiar if you’ve ever been in a modern day Kia. 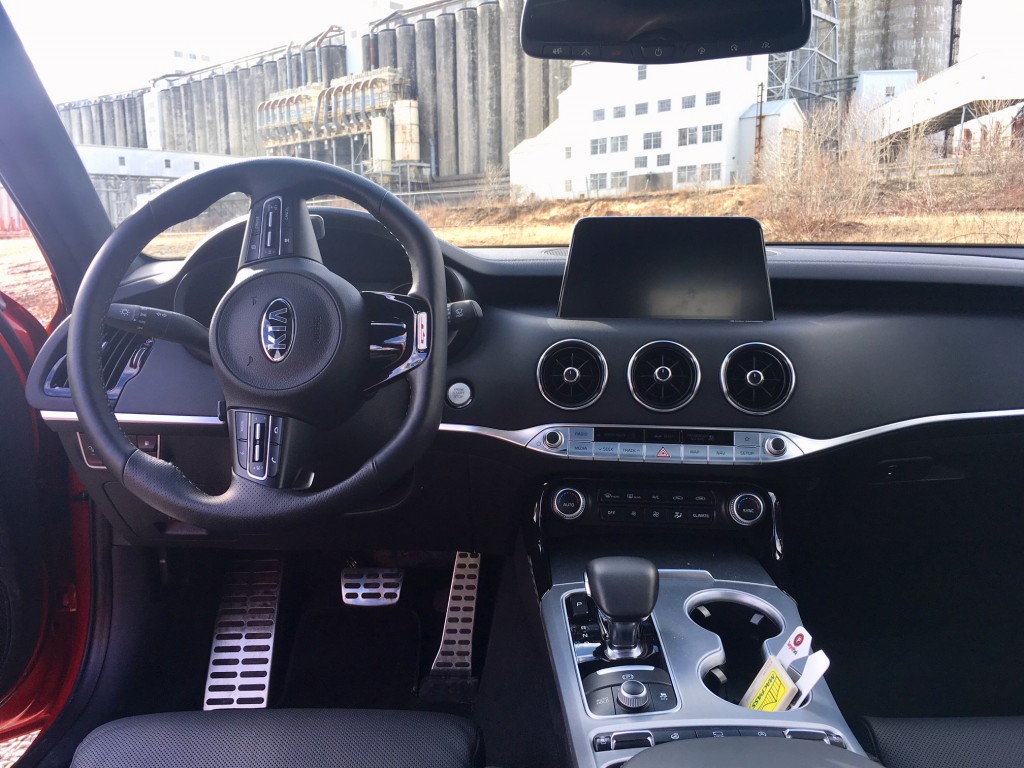 Passenger room is good for the most part, though outward visibility takes a hit thanks to that sleek design. I’m not exaggerating when I say there’s virtually no visibility out the back. The rear windshield is raked so much, and the rear deck lid is so high, that it’s effectively impossible to reverse the Stinger without the aid of the much needed back up camera. Outward visibility from the side windows also isn’t terribly good either. 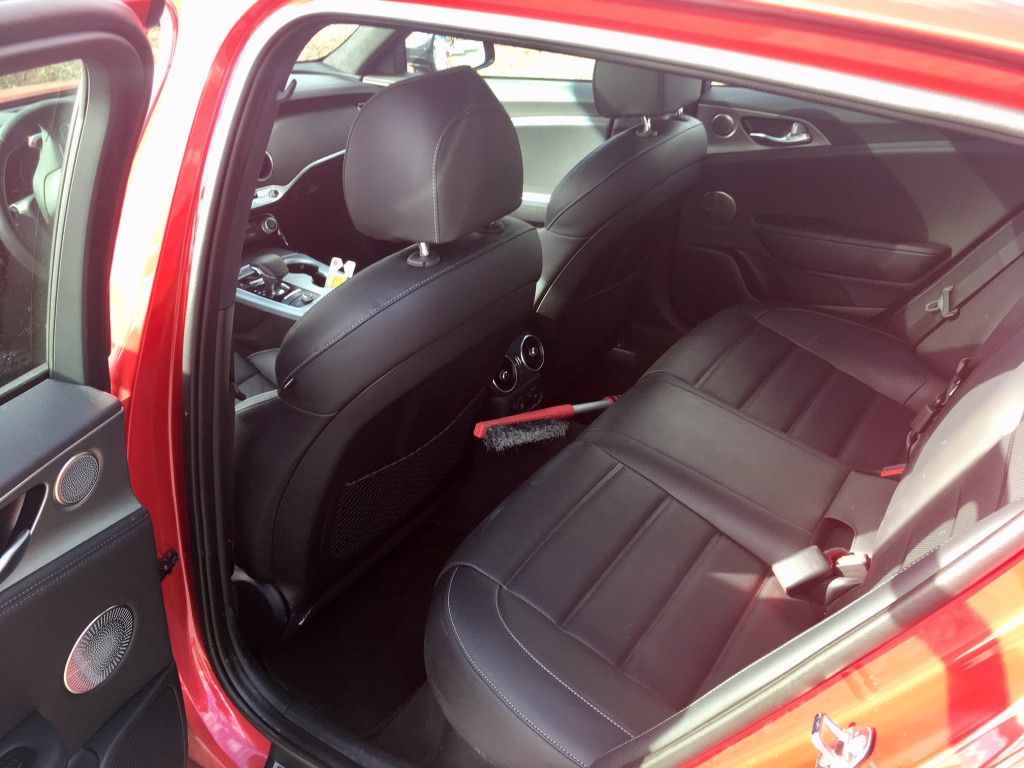 Cargo room, however, is good thanks to that hatch. There’s a wide opening and the rear seats can be folded to reveal a cavernous load floor. Just because you can’t necessarily see out of this thing, doesn’t mean it’s intolerably impracticable. 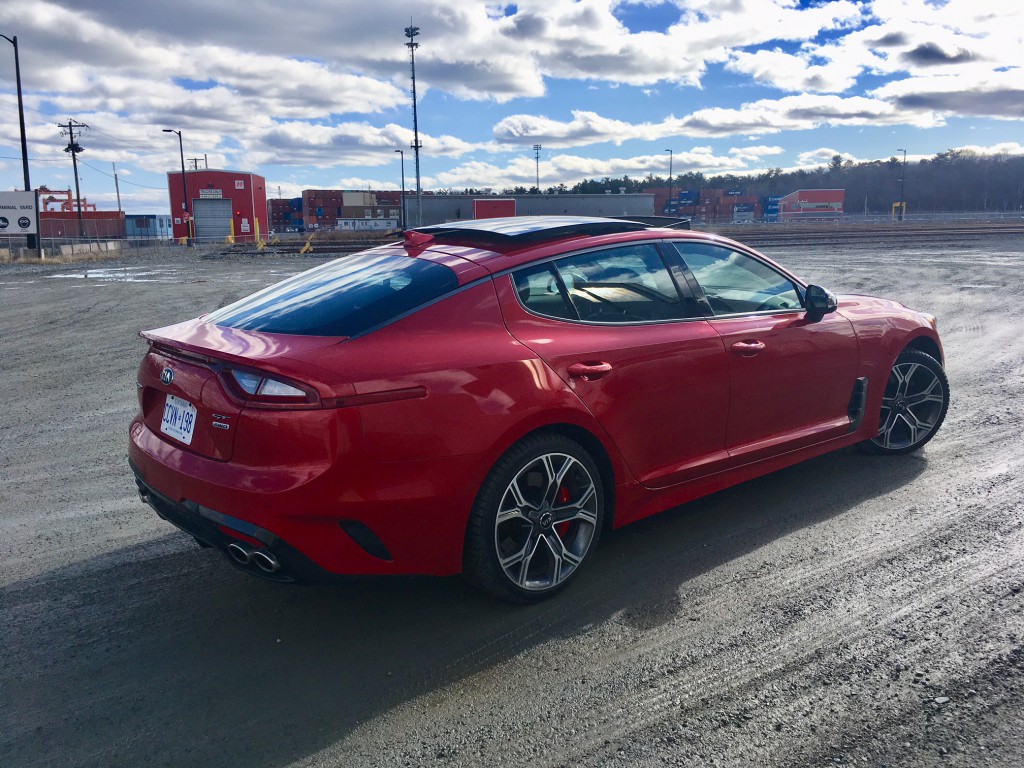 Power comes from a 3.3 litre V6 which is good enough to produce 365 horsepower and 375 pound feet of torque mated to an eight-speed automatic. That means you can get the Stinger from zero-100 in under five seconds. Not bad at all! And when the Stinger accelerates, it does so with gusto. Its real trick, though, is its awesome ability to go from 80-100 km/h. It can get there unspeakably quick, which makes the Stinger a highway superstar. It’s even relatively comfortable on the highway too, even with those painted on tires, but be forewarned, I had to learn the hard way that a rogue pothole can easily take down the mighty Stinger. A bent rim and two flat tires later, I was back on the road eventually. 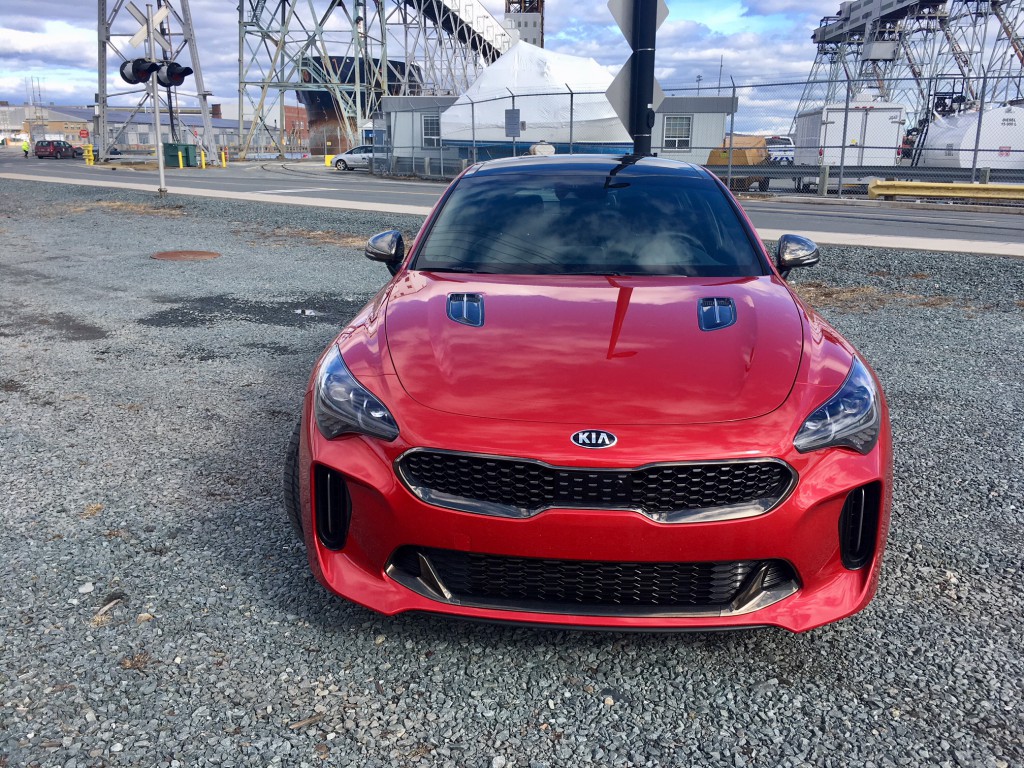 The Stinger is not a raw performance car; it fits the definition of a true GT car almost to a tee. Its performance credentials shouldn’t be mocked, but it can settle itself down to a comfortable cruiser at the same time. This is a car for grownups, not Honda fanboys with loud fart cans coming out the back.

Canadians hoping to do some tail sliding burnouts or donuts will find it difficult since the rear-wheel drive version is not available here. All-wheel drive is the name of the game only. That’s an advantage in winter, but, as a fan of rear-wheel drive cars, I would prefer to at least have the option. 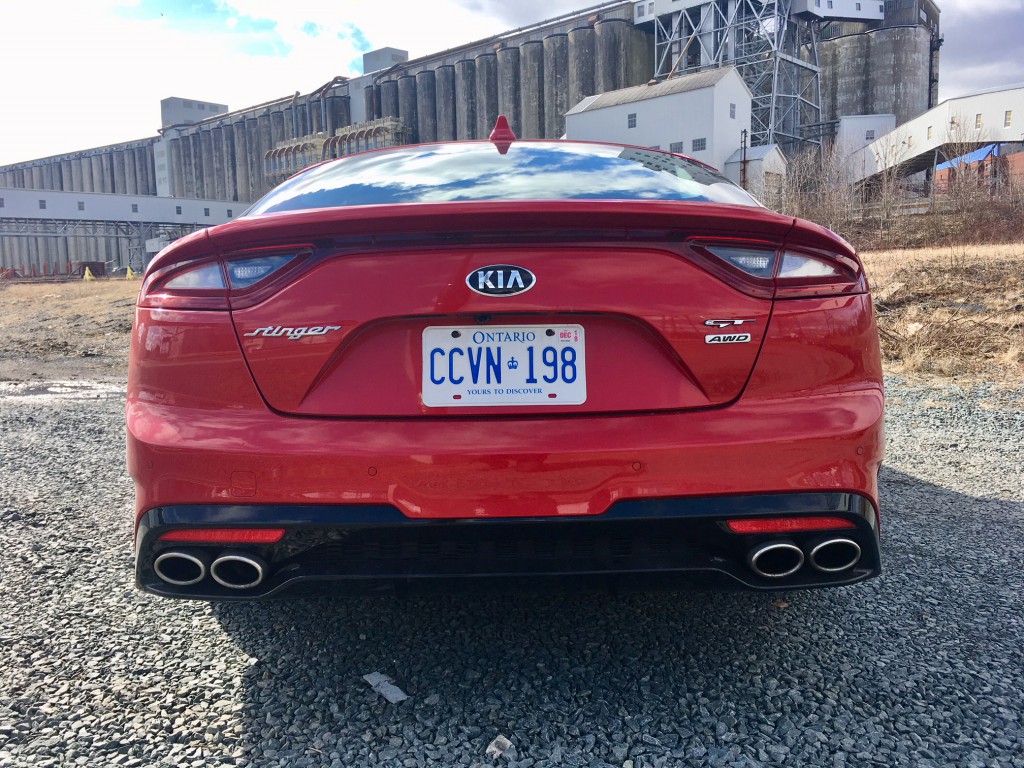 The drive modes are easy to cycle through thanks to that dial, and I found myself keeping it in sport mode more often than not. In this mode, the Stinger acts a bit like a pit bull. It’s gentle and composed when need be, but it can spring into action at the touch of the throttle, almost as if it’s reacting to its owner saying “sic em’, boy!”

Eco mode neuters it a bit too much, but I would say normal mode would suffice for most. 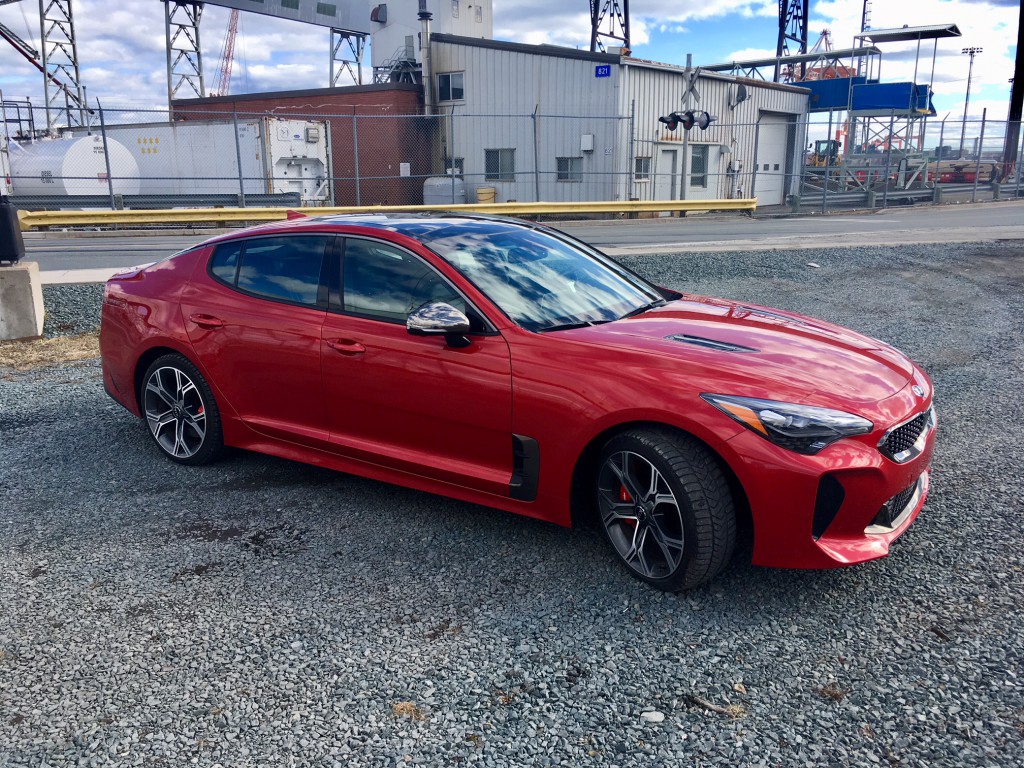 Around town, the Stinger feels like a big car and its wide turning radius doesn’t really help matters. Even just pulling into a parking space can be a two-step process if you don’t approach the angle perfectly while remembering the poor turning radius. Match that with the inability to see out of this thing and city driving suddenly becomes a bit of a challenge. That said, it has plenty of aids to help out such as that rear camera which features an overhead 360-degree view. It should be noted that one of the cameras for this feature was not working so on the driver’s side of the vehicle icon it would just show dark blue. There’s also parking sensors with cross-traffic alert to help as well. 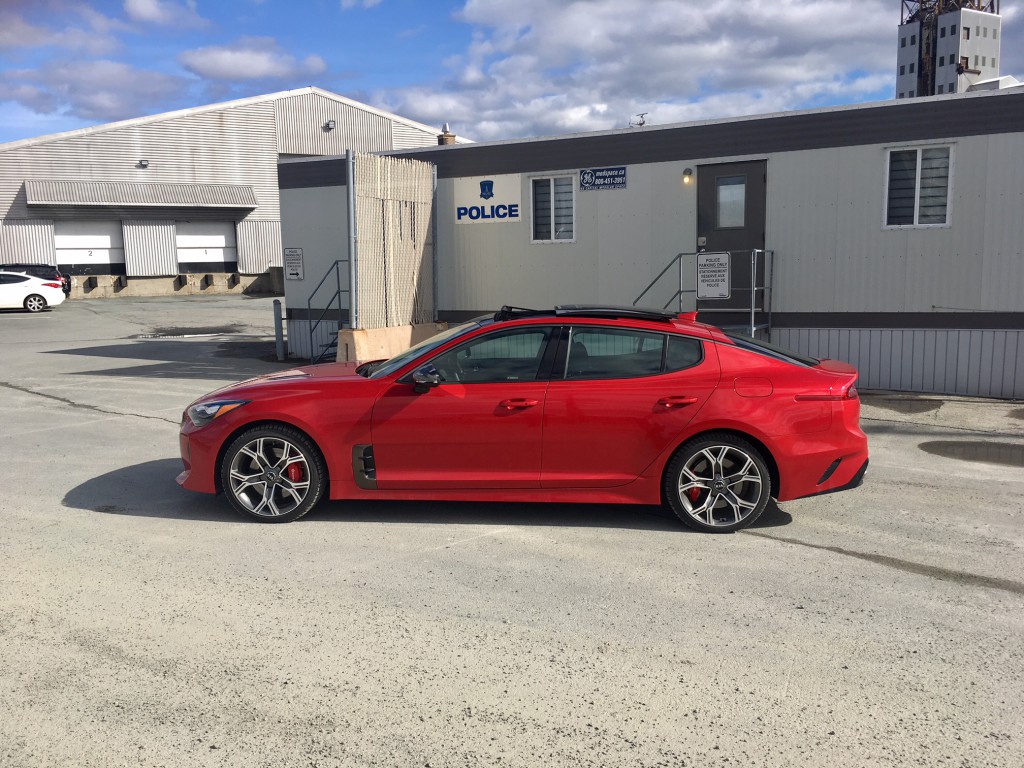 The Stinger tends to corner flatter in Sport mode than the other modes, but regardless it feels very composed and surefooted. It almost dares you to push it harder. If you go to extremes with it, understeer will be the end result, but it really takes a lot to break the Stinger’s grip. Stopping is a synch thanks to the grabbiest Brembo brakes I’ve tried in a while.

Official fuel consumption figures come in at 12.7 L/100 kms city and 9.6 highway. My real-world consumption came in at a relatively decent 12.1 L/kms. That includes a fair amount of spirited driving. 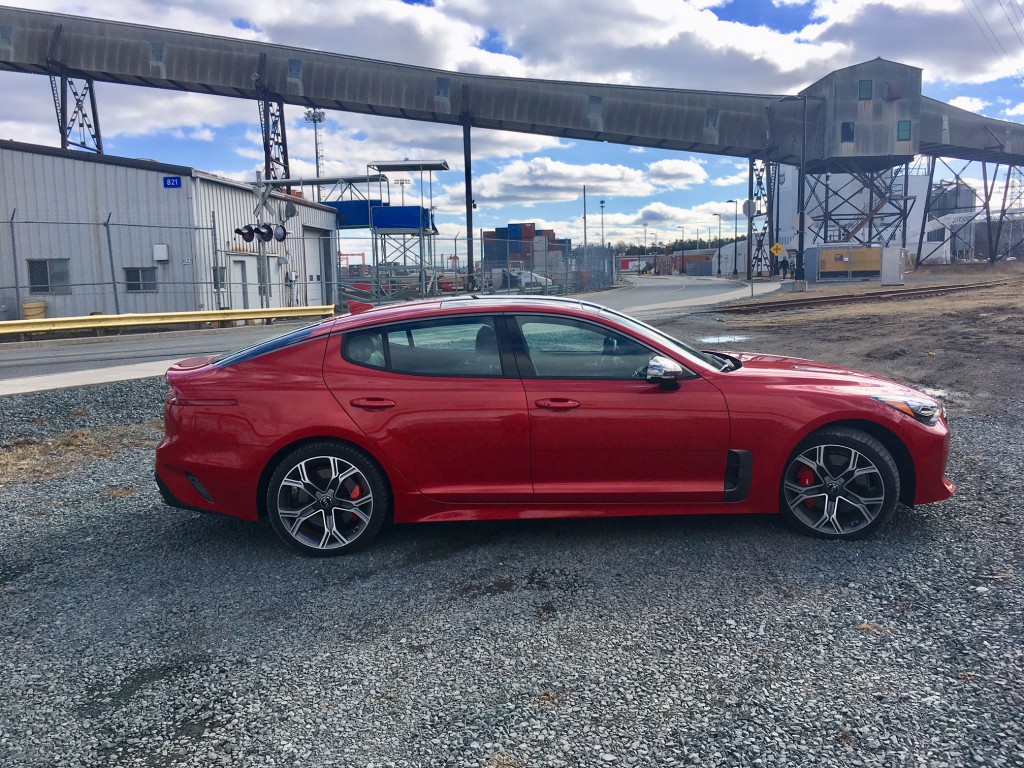 So as a product, the Stinger, overall, is a quite impressive vehicle. But the Stinger is, and needs to be, much more than that.

It may be questionable to invest so much money into a segment whose sales is slowing quicker than Harvey Weinstein’s career, but this was a smart move by Kia. The Korean brand’s entire business case is modeled for value. Yes, the Kia is expensive, but its features and performance credentials are found in vehicles that cost $10-$15 grand more. 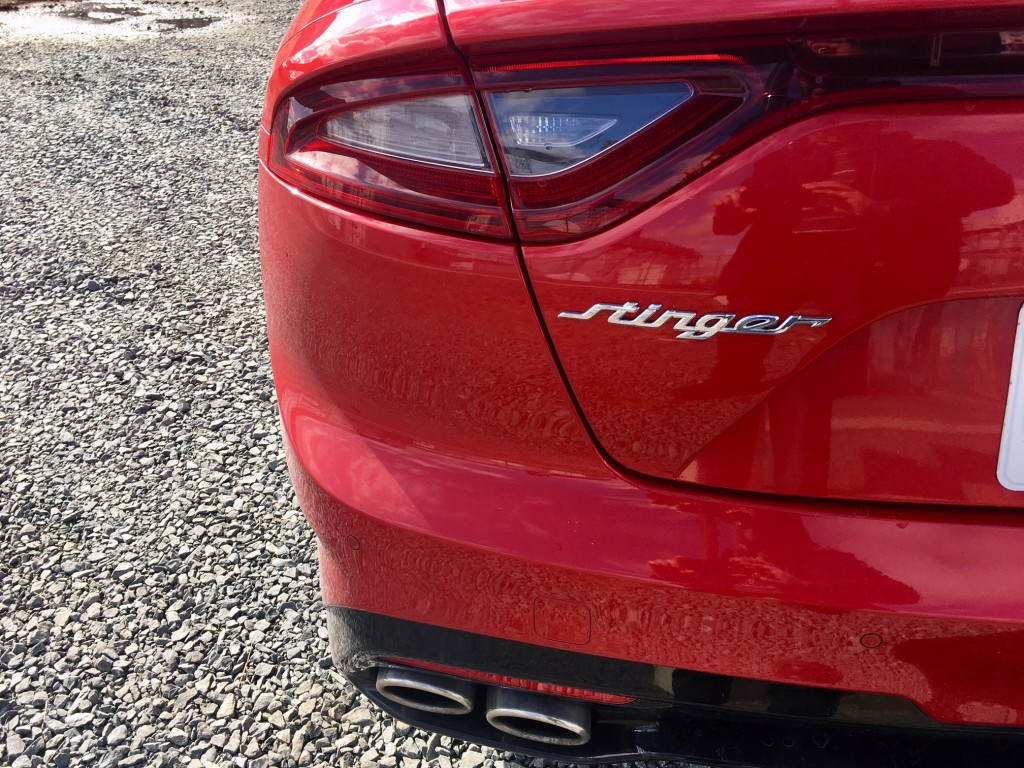 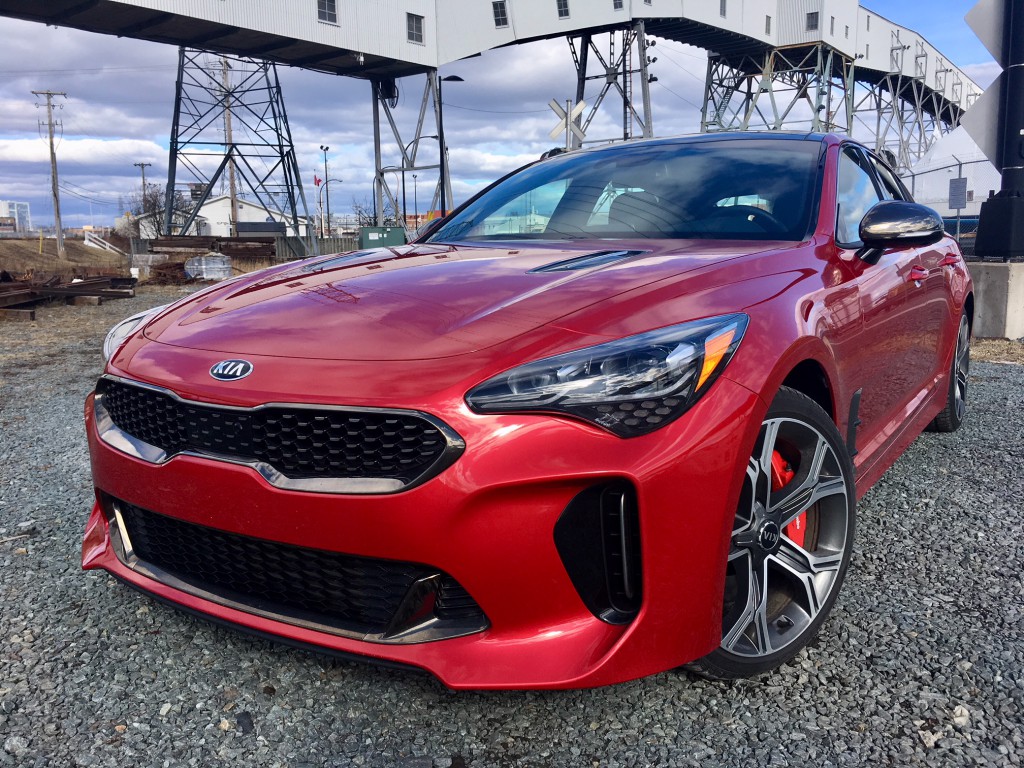 As a car that represents what the once laughed at Korean brand can do, the Stinger hits the nail on the head. It’s a PR person’s wet dream. Who cares that it won’t sell as much as an SUV would. This thing is proving that the Koreans are in it to win it. And they are showing no signs of slowing down.