Reputation is something marketing and PR departments for automotive companies lose sleep over. It’s their job to ensure the brand they are employed by is represented in a positive light.

It can be a tricky job because an automotive brand’s reputation can be largely out of their hands. Sure, they can report back saying the brand is perceived negatively because of xyz but ultimately the engineers, designers, product leads and corporate flack all make driving decisions that ultimately may affect brand reputation.

Public perception of a brand is a difficult thing to manage. For instance, there are still people out there who are shocked when they see a modern day Volvo, assuming the Swedish brand still only uses a ruler to design their product.

When it comes to Kia, memories of models such as the Sephia and Magentis still resonate in peoples minds. Even just mentioning the brand today still causes people some measure of discomfort.

My friends and family usually ask what press vehicle I am driving from week to week and when I mentioned the upcoming Car Driven test model would be a Kia Rio, a lot of people scoffed. Some felt sorry for me. Others had no reaction at all.

After a couple of weeks of testing premium brands, I had to justify my excitement to them over and over and explain it.

Firstly, I enjoy the new designs coming out of the Kia brand lately. Unlike cousin Hyundai who, in my opinion, tries a little too hard to be swoopy and flashy with their designs (though admittedly of late they’ve toned that back), most new Kias are modernly classy with seemingly minimal effort. The Rio is no exception. 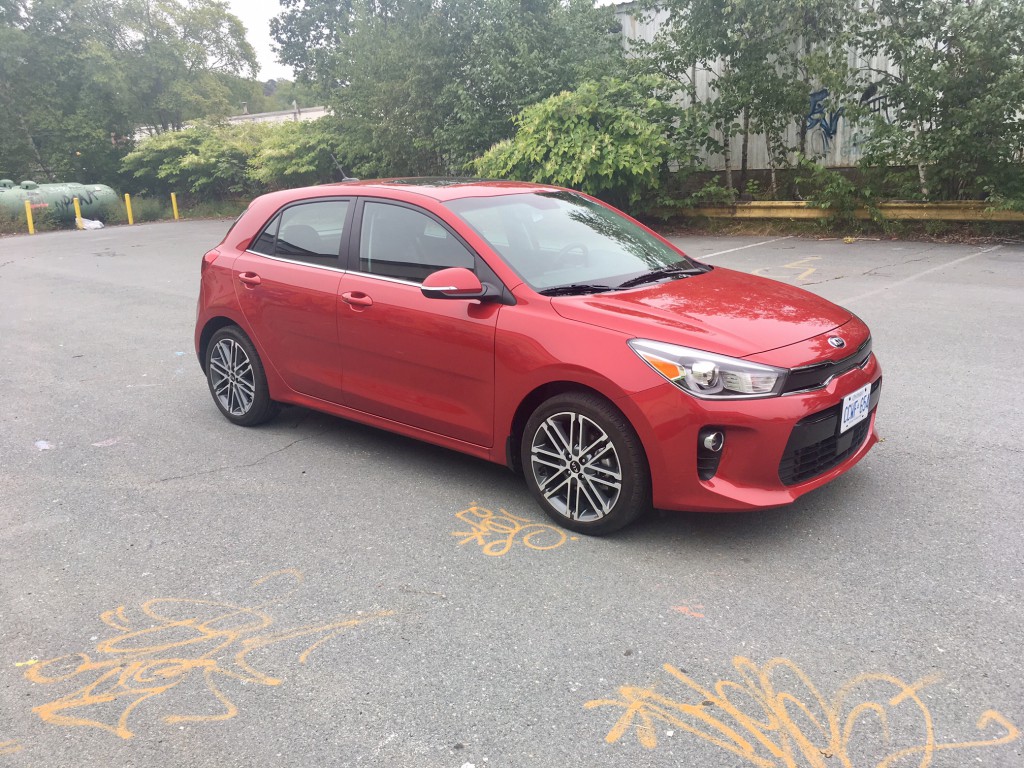 Though the design isn’t dramatically different from the last generation, we see reworked headlights which now feature LED daytime running lights on the top trim which look similar to Volkswagen designs. That might be because designer Peter Schreyer was poached from Volkswagen/Audi a decade ago to head Kia’s design department.

There’s a reworked grille and bumper. You can get handsome looking wheels up to 17 inches and the rear tail light design is particularly eye-catching at night. Just because the Rio plays in the subcompact category, it doesn’t necessarily need to look the part and the new Rio’s design accomplishes a good measure of class and looks upscale. 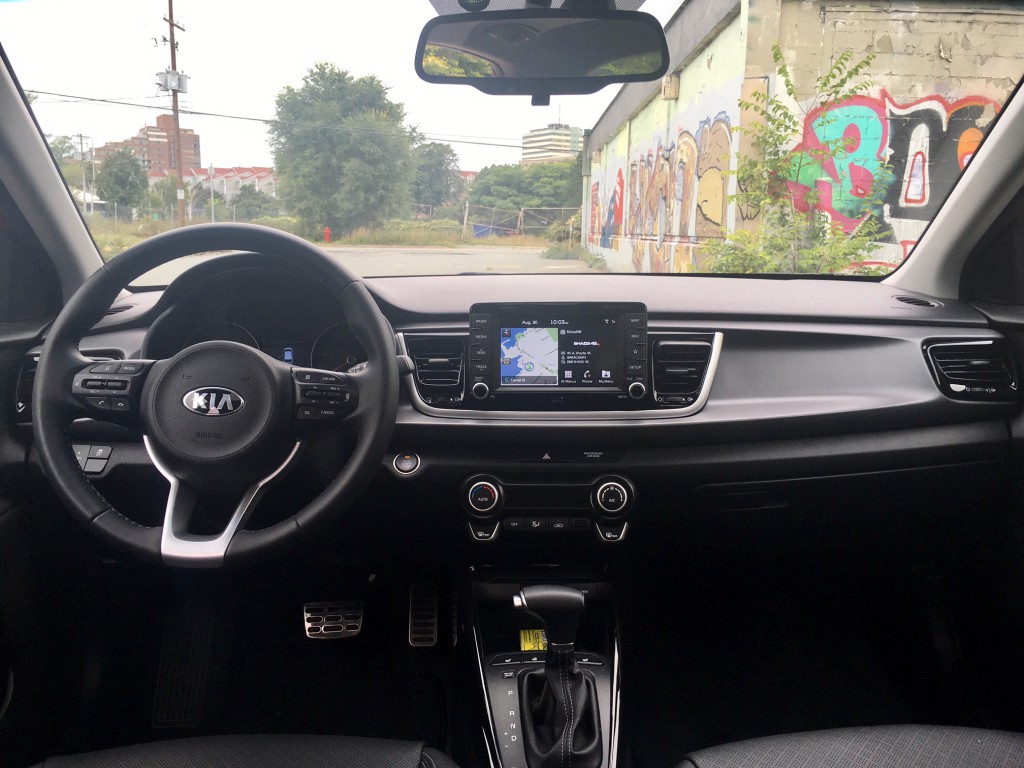 Inside, the interior matches the exterior’s premium looks along with lots of goodies throughout. Granted, my tester was the top trim, but you get a fair amount of tech, even in the entry LX trim including a rearview camera, Bluetooth, Sirius satellite radio, keyless entry, power locks and windows and automatic headlights to name a few. Yes, that is all standard in the base model which starts at $14,995.

You can deck out your Rio from there all the way up to my tester’s EX Tech trim and you’ll get everything from a heated steering wheel, to leather seats, to the aforementioned 17-inch wheels to push button start and more. Honestly, even if your perception of the Kia brand is unwarrantedly negative, you can’t deny that it is one of the most value conscious brands in the market today. 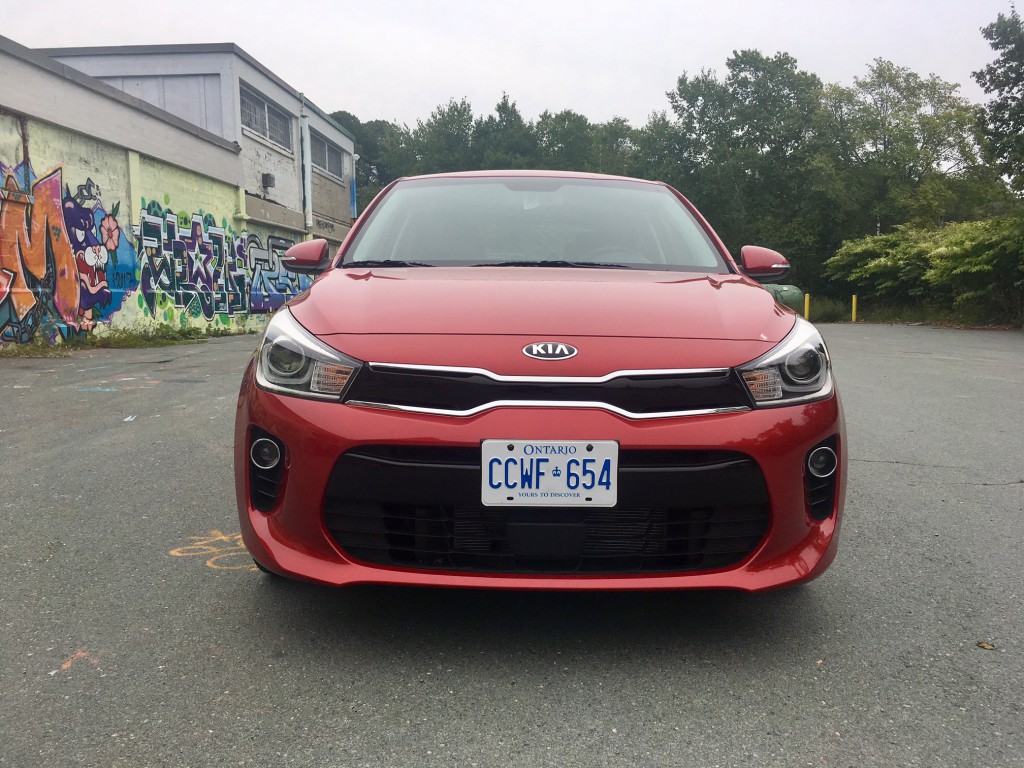 The upper trims also feature Kia’s UVO service which is similar to GM’s Onstar service. If you get yourself into an accident, or are in an emergency situation, a push of a button will get you in touch with a human being at Kia’s call centre who will offer assistance. The best part? It’s free. And I don’t mean it’s free for the first three months or even for the first year. It’s free for five years. Hell, you may have even moved on to your next Rio in five years time which means you’d likely never have to pay for the service at all.

Quality of materials is good for the most part, but hard plastics can still be found here and there. Interior space isn’t bad for a little subcompact hatch, same with cargo room, but this little car is definitely more suited for shorter trips. I had the opportunity to take it the Maine for instance, but opted to take my girlfriend’s larger, and much comfier Ford Fusion. 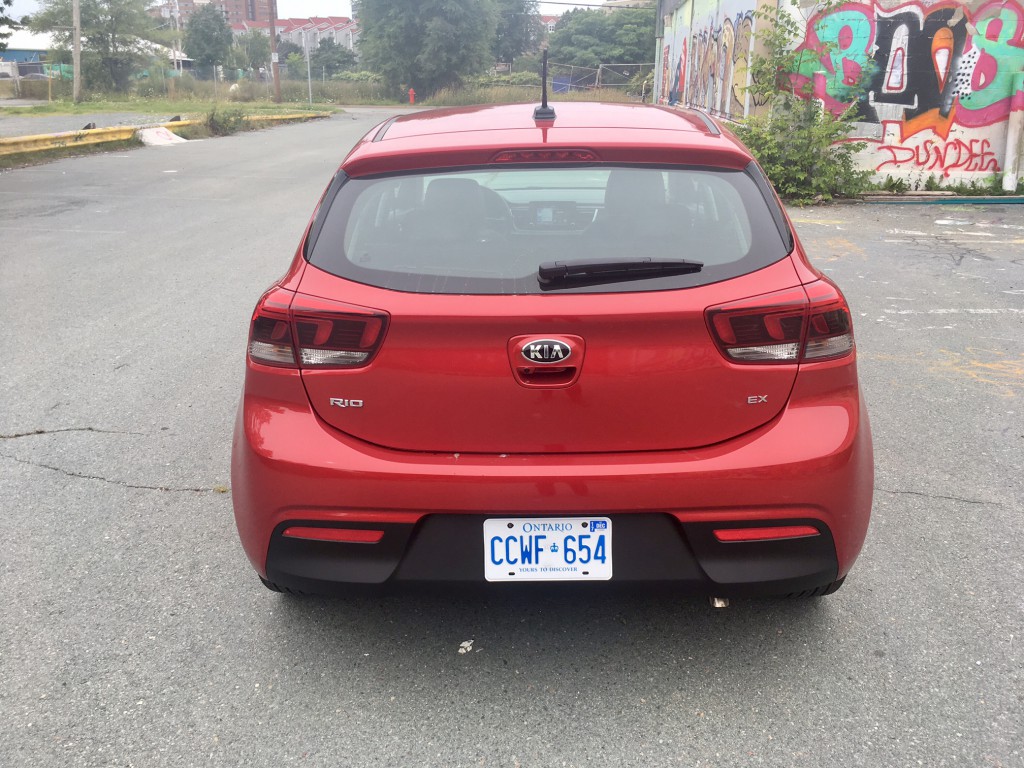 But don’t take that to mean the Rio is uncomfortable, it has added sound deadening which is noticeable. It’s no Buick inside, but I’d say it’s now one of the quietest cabins in the class.

Power comes from a 1.6 litre direct injected four cylinder which produces 130 horsepower and 119 pound feet of torque. Strangely, that’s less power than the previous generation Rio generated; 7 horses and 4 pound feet of torque less to be accurate. However, Kia is quick to point out that the Rio still has the most power in its class. A six-speed manual is available through disappointingly only in the base trim. Otherwise you get a six-speed automatic which is welcomed over the current CVT craze the industry seems to be experiencing. 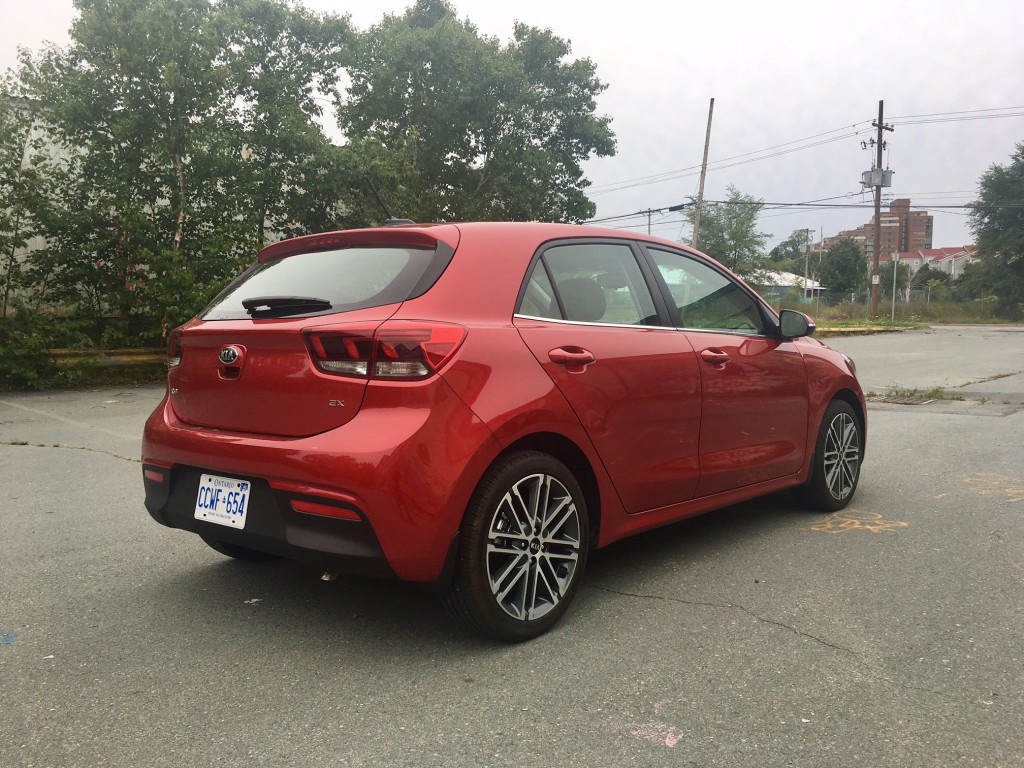 Obviously quick acceleration times is not the Rio’s forte (excuse the pun!), but it has enough pick up for city driving and even highway driving doesn’t strain the Rio all too much.

Kia has increased rigidity in the new Rio which adds a bit more confidence in corner carving, which it can do surprisingly well, but again, do not mistake the Rio as being a Focus RS in this regard. While the rigidity certainly helps to have a sportier ride, it does impede slightly in terms of comfort. Bumps and other imperfection in the ride are usually felt, but it isn’t usually to the point of being jarring. As someone who prefers a stiffer suspension, this didn’t bother me at all. 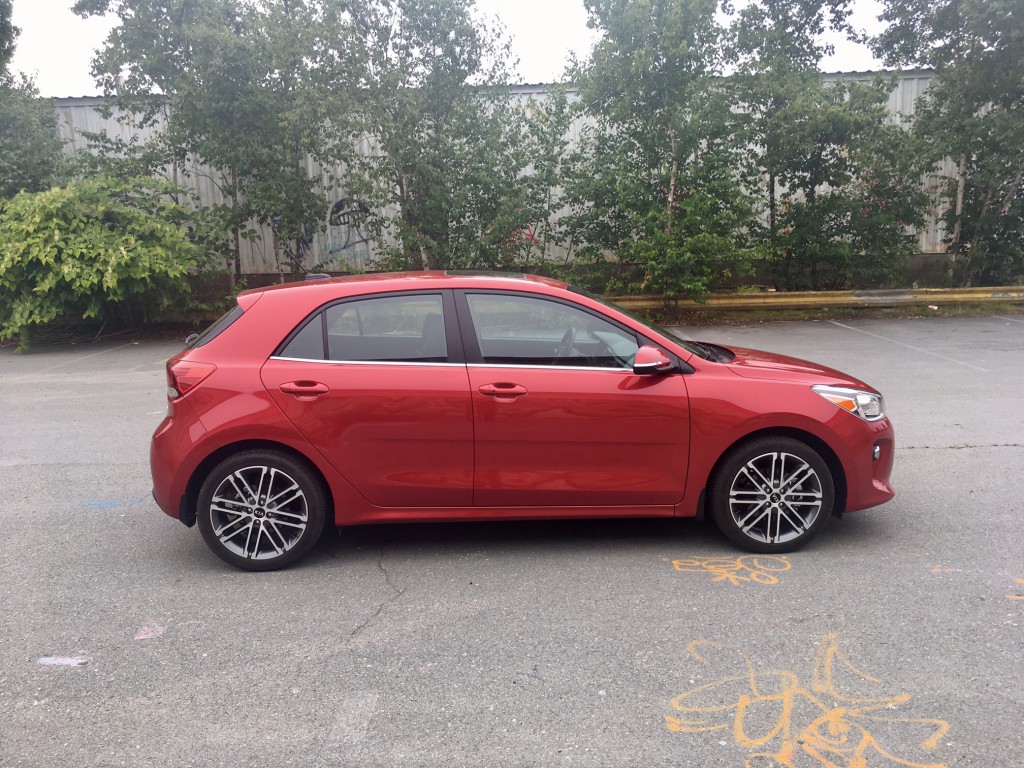 Fuel consumption numbers have no been released by Natural Resources Canada but the previous generation Rio was rated at 8.7 L/100 kms city and  6.5 highway. You can expect this new Rio to match, or likely beat those official ratings which is believable considering I returned 7.1 in mostly city driving. That’s pretty good.

And so is the new Rio. Indeed, during my time with it, I had a lot of inquiries as to whether or not it was something I would buy, to which I would always reply, “of course not!” 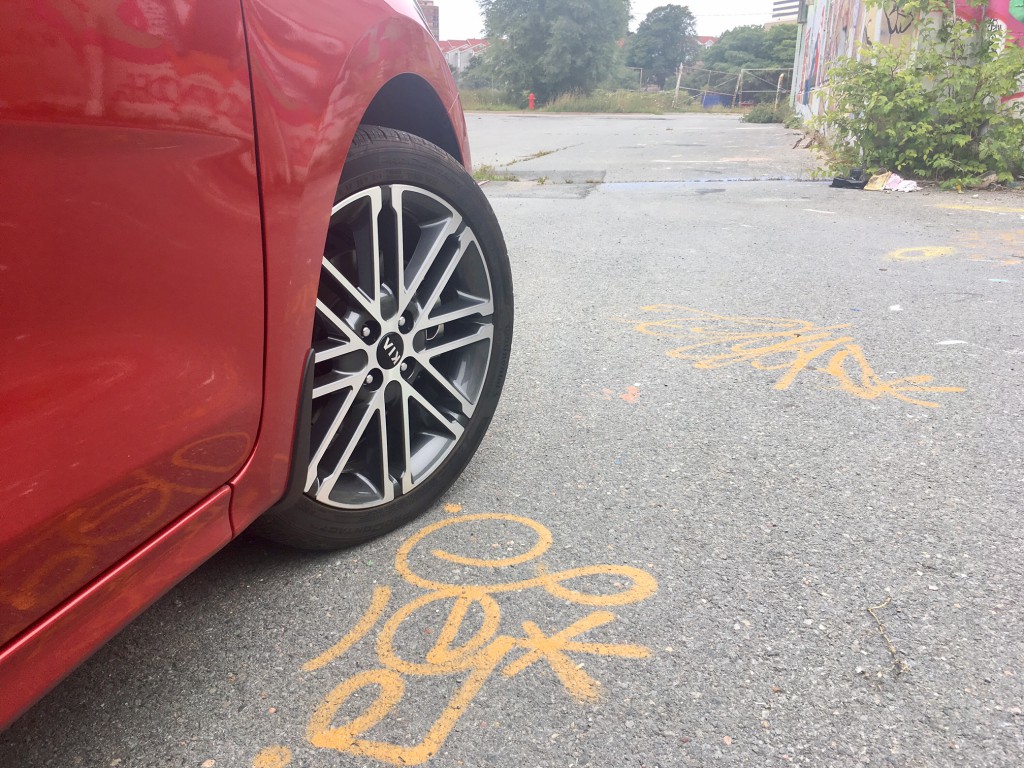 But that isn’t in any way to fault the Rio, I just prefer to drive more engaging performance vehicles. However, I would always follow up my curt response with, “but you should!”

I would say the new Rio is now one of the more interesting vehicles in the class. Yes, the Fit has reliability and versatility behind its name, the Versa Note has fantastic interior space, and the Fiesta likely takes the nod for best performance, but the Rio definitely is the value leader and can blend the attributes of the others quite nicely.

While most Kia models have been synonymous with value for a while now, the Rio might singlehandedly be the one that turns around the brand’s reputation for the remaining ignorant. All they have to do is try one. 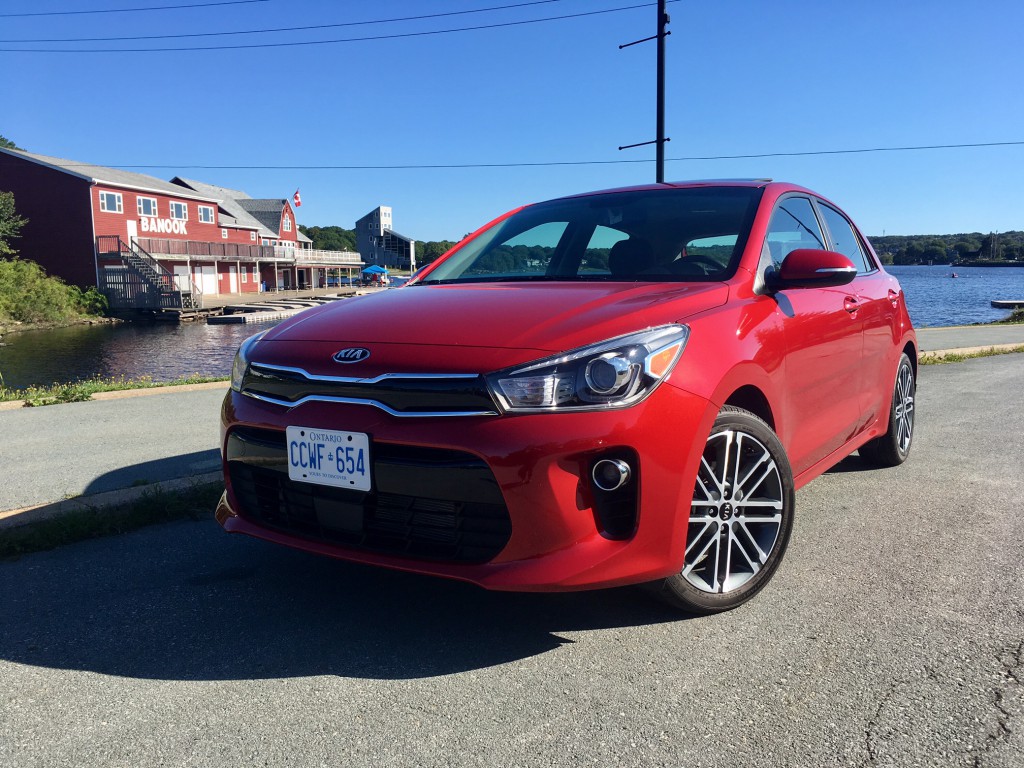