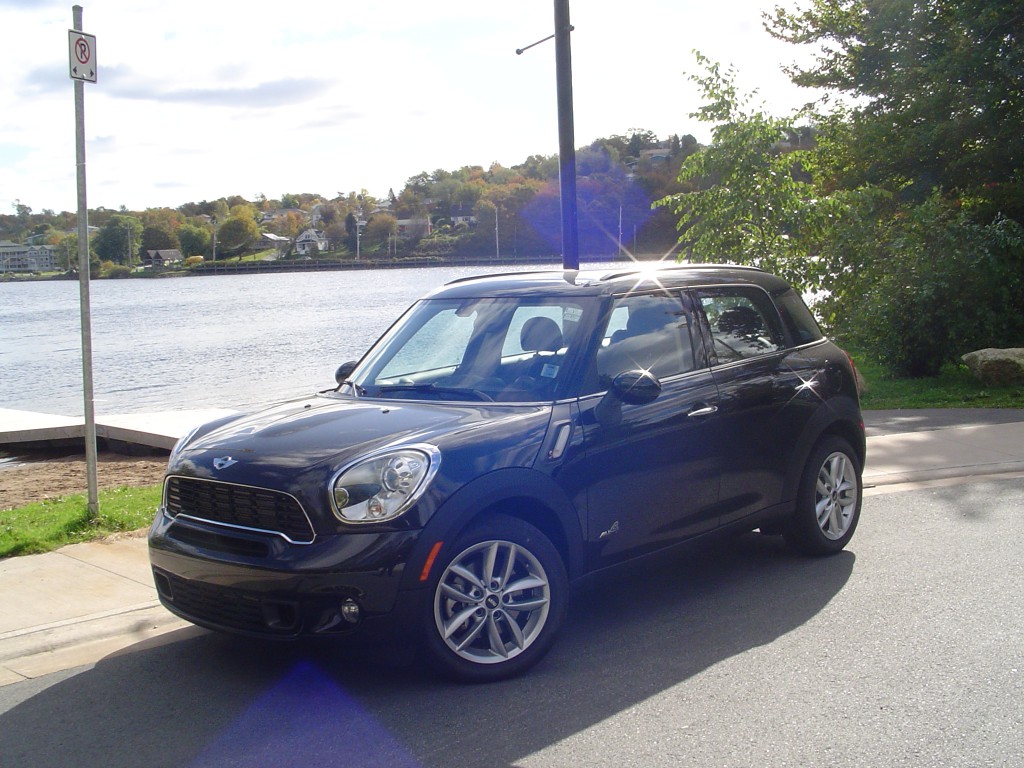 There was once a time when the Mini Cooper was the smallest vehicle you could buy. The year was 1959 and everyone loved the original Mini for its small size, small price and its light, fun-to-drive nature. It was truly a British automotive success story.

The original Mini chugged on for a very long and unheard of 40 years without many changes save for special editions – a testament to the Mini’s appeal. Mini obviously didn’t want to mess about too much with a good thing. But all good things must come to an end and in 2000, production for the original Mini ceased with the brand moving quickly into hiatus as the sale of Rover, which Mini was a part of, was dealt to BMW. BMW then went and winded the Rover brand down.

However, BMW promised to keep the Mini brand alive with an all-new iteration of the Mini Cooper which officially bowed in 2002. The design was definitely polarizing for Mini purists, despite BMW’s effort to keep the design and spirit of the original. Most Mini maniacs had cried blasphemy at the new Mini’s size. While it was still a small car, it was much bigger than the original.

And here we are now with the biggest Mini ever produced. While the Mini Cooper is still selling well today, a common complaint from new customers to the brand was that it was too small for their needs. So, BMW then created a longer Mini with three doors called the Clubman, but it’s polarizing looks and remaining tight quarters kept potential Mini customers begging for something bigger.

Well, BMW listened and now we have the Mini Cooper Countryman – the first ever five-door Mini. Does it have what it takes to wear the Mini badge? 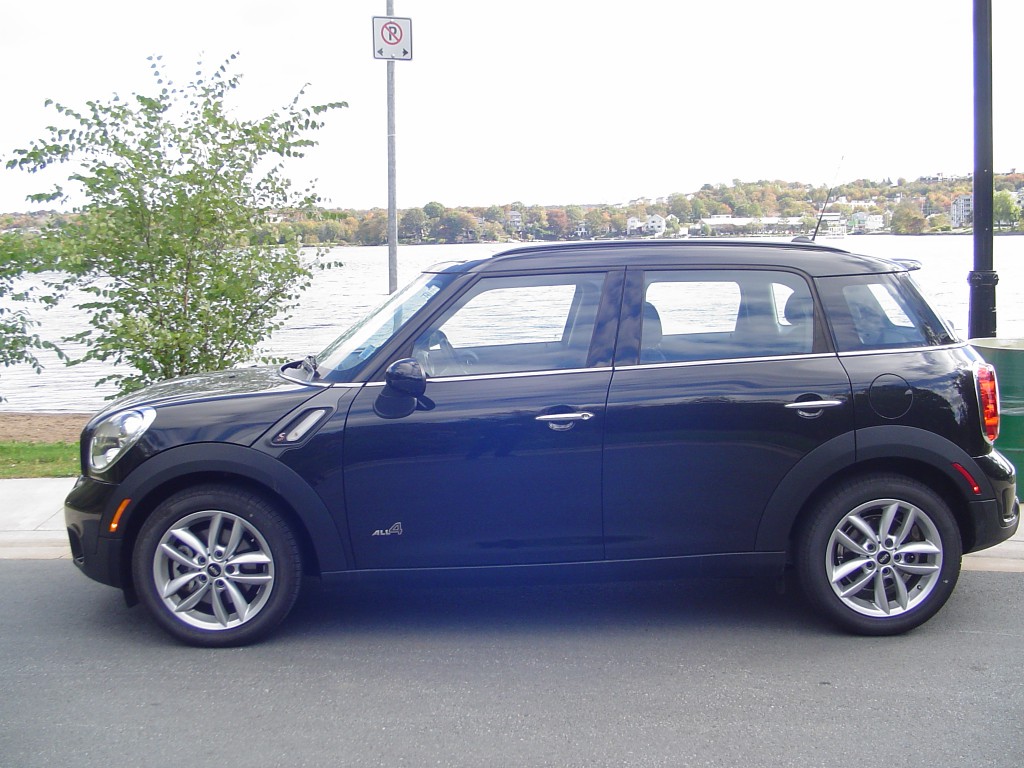 While there is no mistaking the Countryman for anything but a Mini, the styling is still quite the departure for the brand. With the taller ride height, a not quite so flat roof and more shapely headlights than the traditional ovals, the Countryman is a a bit odd looking for a Mini from certain angles. It’s definitely the more quirkier designed model of the Mini family. It’s a look that takes a bit of getting used to, but eventually it charms you into feeling quite comfortable with the looks. Besides, it’s no stranger looking than a Nissan Juke, that’s for sure. That said, it is a looker, but I’m not quite so sure that it’s for the right reasons. Most of the looks on people’s faces were confused double takes rather than glances of admiration. One thing I do miss is the integrated hood scoop that the S model gets for the Cooper and Clubman. The Countryman S does get an additional air intake but it’s located in a small slit under the grille, not in the form of a hood scoop. This takes a bit of the aggressiveness that most Mini S models usually convey. 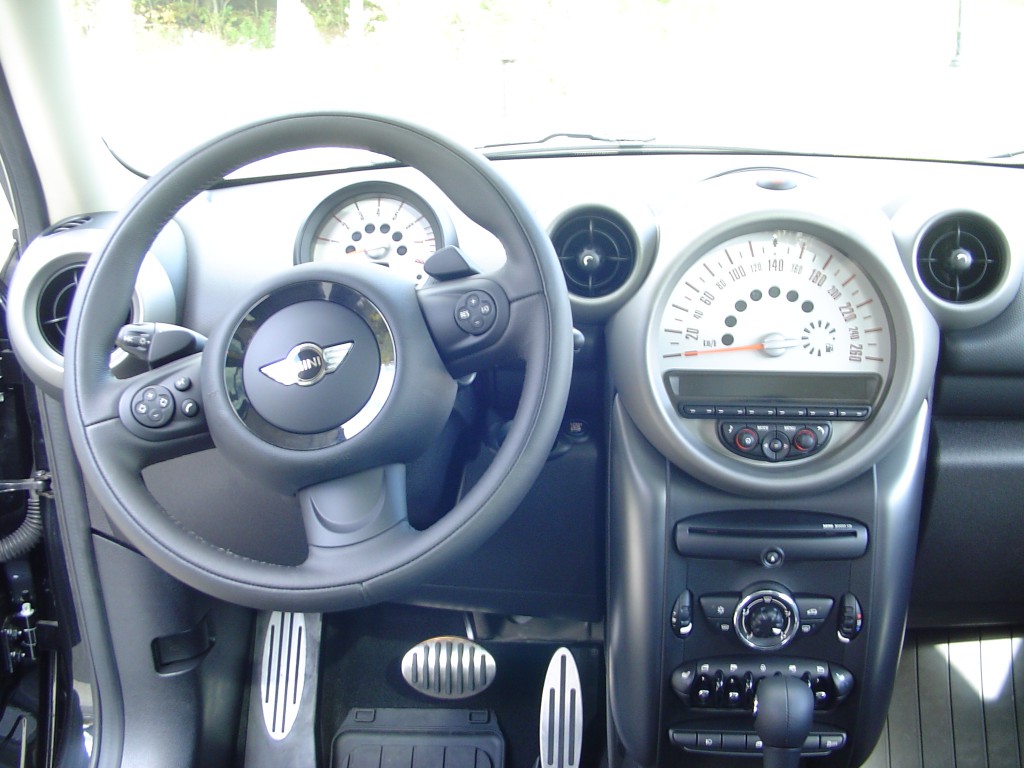 Inside the quirkiness continues as the Countryman is officially a four-seater thanks to a rail that runs through the center of the interior. You can attach things like a sunglasses case and this, supposedly, makes the Countryman more practical. In reality, more practical would be having a seat in the middle. Still, there is adequate leg room back there and the seats are cushy and comfortable. The dash layout is almost exactly the same as the Cooper with the large speedometer in the centre which, by the way I never looked at once to determine how fast I was going, I chose to use the optional digital speedometer in a smaller gauge behind the steering wheels which is more conventional. Touches of black where polished aluminum used to be gives the Countryman a more sporty look. While the layout takes some getting used to, the quality of materials is superb. There is ample cargo room with the seats up, and that space grows to 41 cubic feet of space with the rear seats down, which is actually more space than in a 5-door Volkswagen Golf. 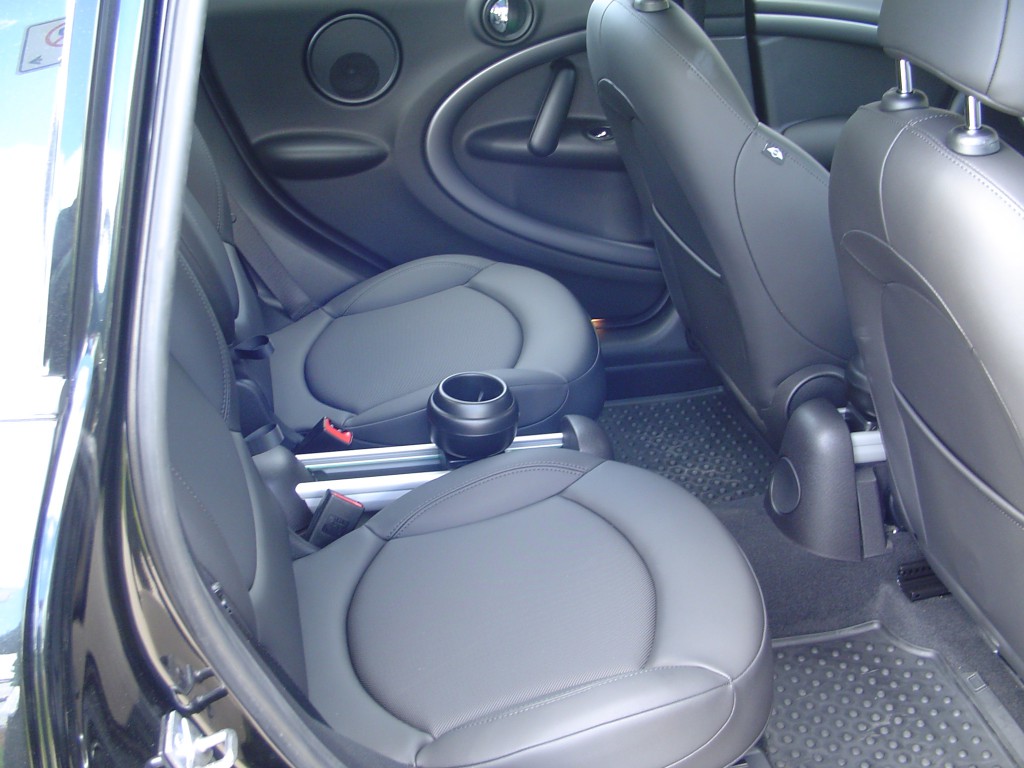 Power comes from a 1.6 litre turbocharged 4 cylinder capable of making 181 horsepower and 177 pound foot torque. The unit uses a single-scroll turbocharger and has an over-boost feature which essentially gives the Countryman S 192 pound foot torque when the throttle is wide open. 0-100 takes 7.7 seconds with the All4 all-wheel drive and 6-speed automaker that my tester was equipped with. If you opt for a front wheel drive Countryman S with a manual transmission you can shave close to a second off that time. There is some slight turbo lag when trying to get the Countryman going from a stand still. 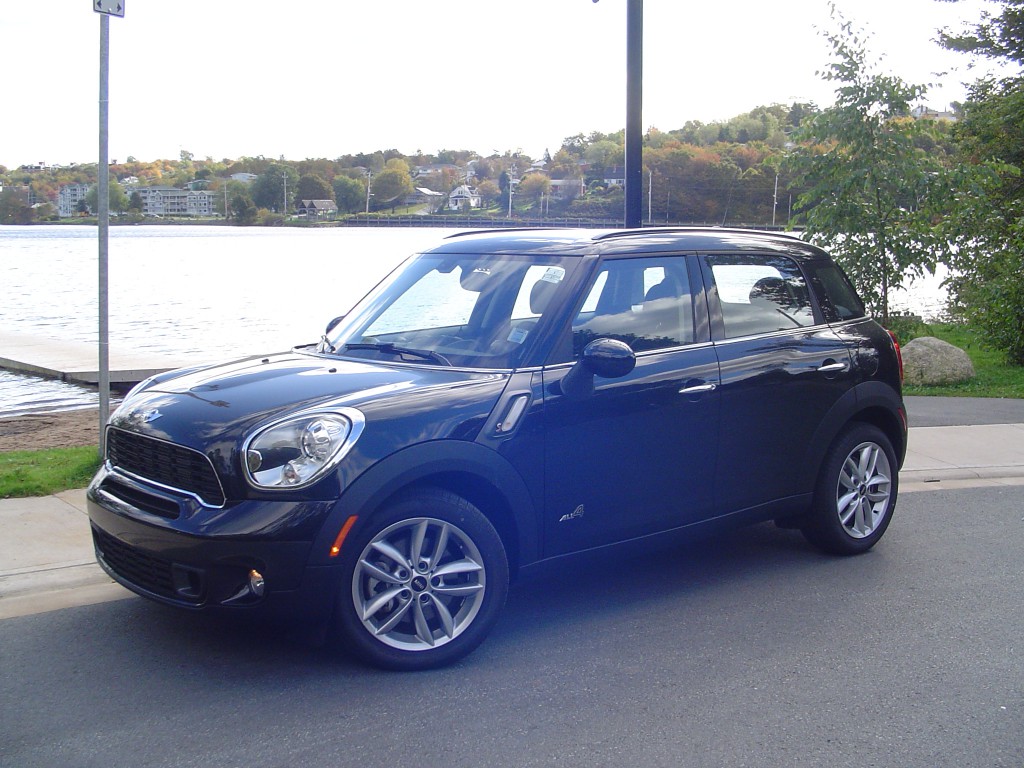 The thing is, though, the All4 system does an excellent job at keeping the heavy (compared to a regular Cooper) planted. Without it, I’d wager there would be much more understeer in the corners. With that said, handling is quite good, despite the raised ride height. You can’t push it as much as you could a Cooper S, but it’s still respectable and feels every bit like tossing a Mini into a corner should. Find a nice twisty road and the Countryman will feel right at home – as any Mini family member should. 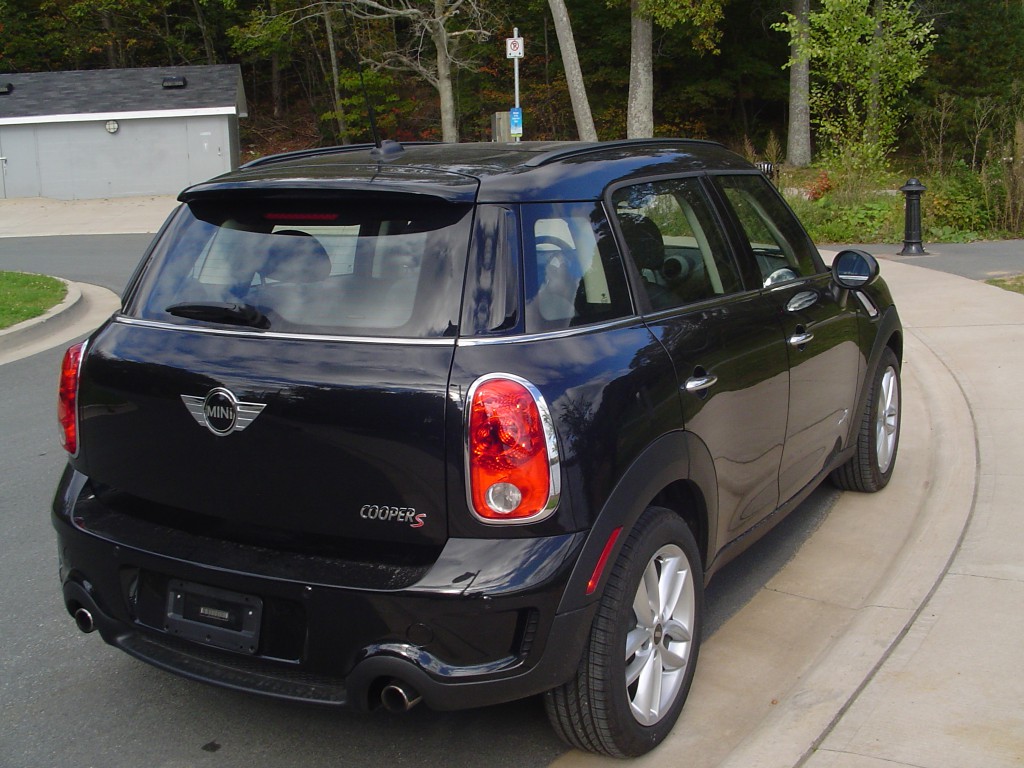 While the shifts in my tester’s automatic gearbox were crisp, a slight delay could be detected and thus, mildly took away from the driving experience. Do yourself a favour and get the Countryman with a proper six-speed manual gearbox. The Countryman S All4 is one of few crossovers that offer a manual transmission with all-wheel drive, so make sure to take advantage of this rare set-up. 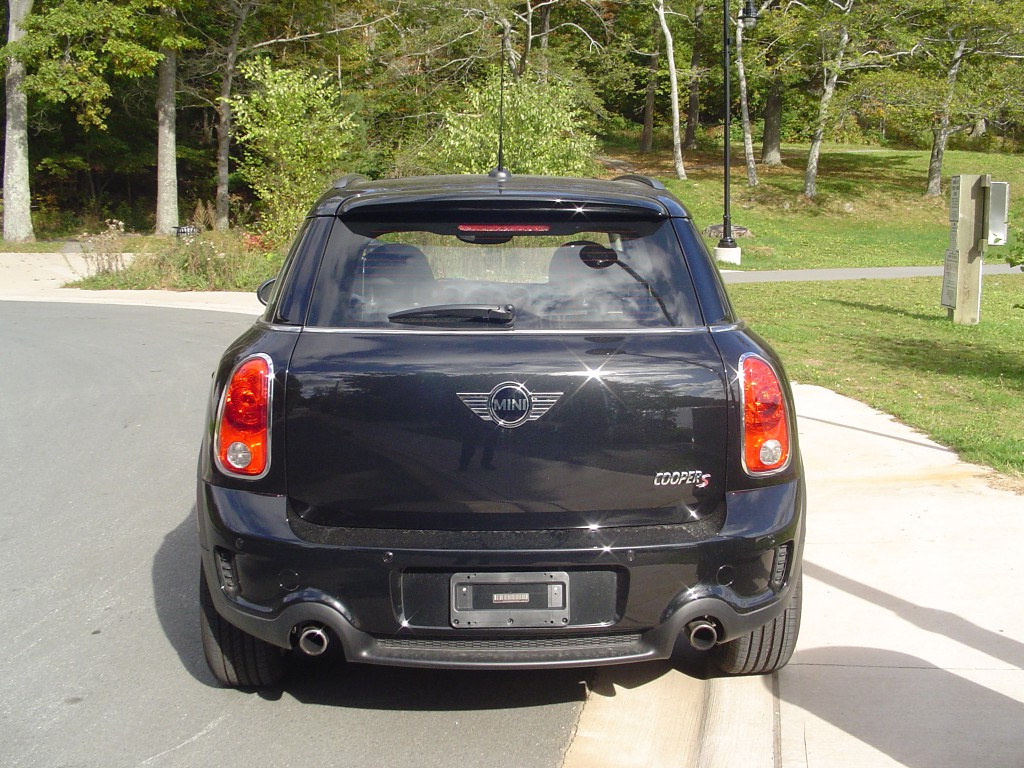 So, the Countryman overall is quite deserving to wear the Mini badge. It has all the right ingredients: quirkiness, agility, fun to drive and good on gas. With that said, there is something missing that I can’t quite put my finger on. When you drive a Mini Cooper S, you honestly feel like you’re 7 years old again driving a go-kart only this time on public roads. When you get into the Countryman you feel like a grown up driving a capable grown up’s car. It’s almost like the Mini Cooper S is a kid who gets excited to go to school that day because it’s show and tell, while the Countryman S All4 is a grown up excited to go to work because he has a lunch meeting that day with a prospective and lucrative client. Both exciting, but both in very different ways. 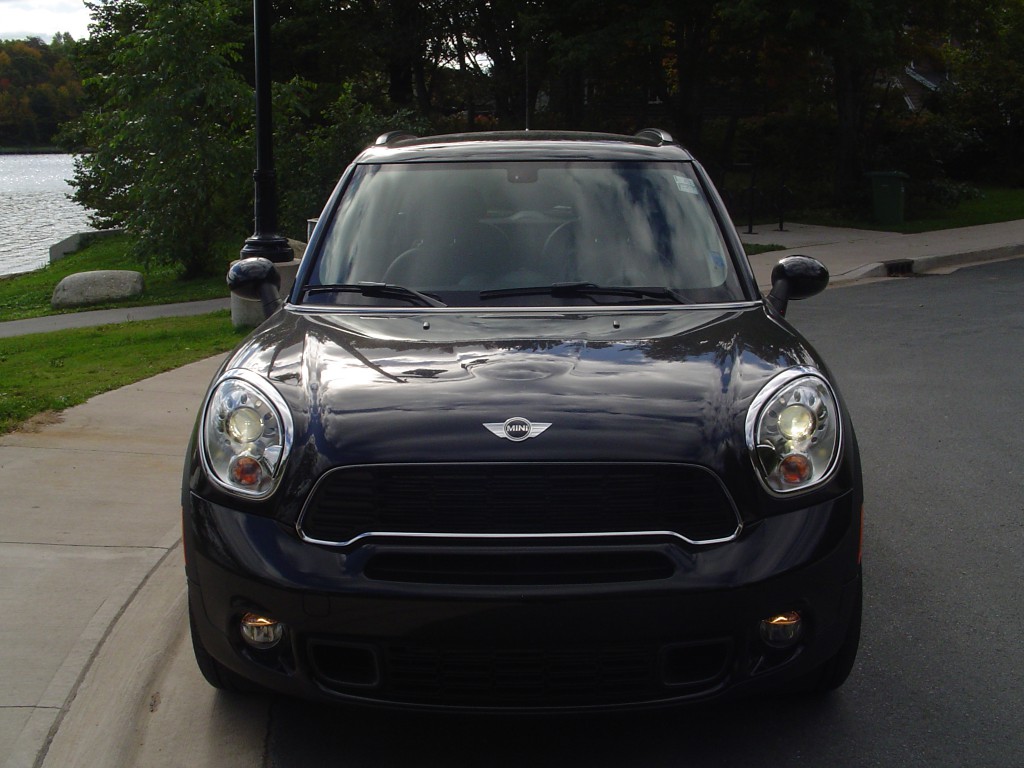 My personal thought is that the Countryman is definitely a worthy competitor in the segment, which likely consists of the Volkswagen Tiguan and the Nissan Juke, but the novelty and the soul of a Mini product is lacking slightly. However, Mini owners that just plain need more space and practicality now have something worthy enough of keeping them in the brand. The only question is, what is the point of the Clubman now?