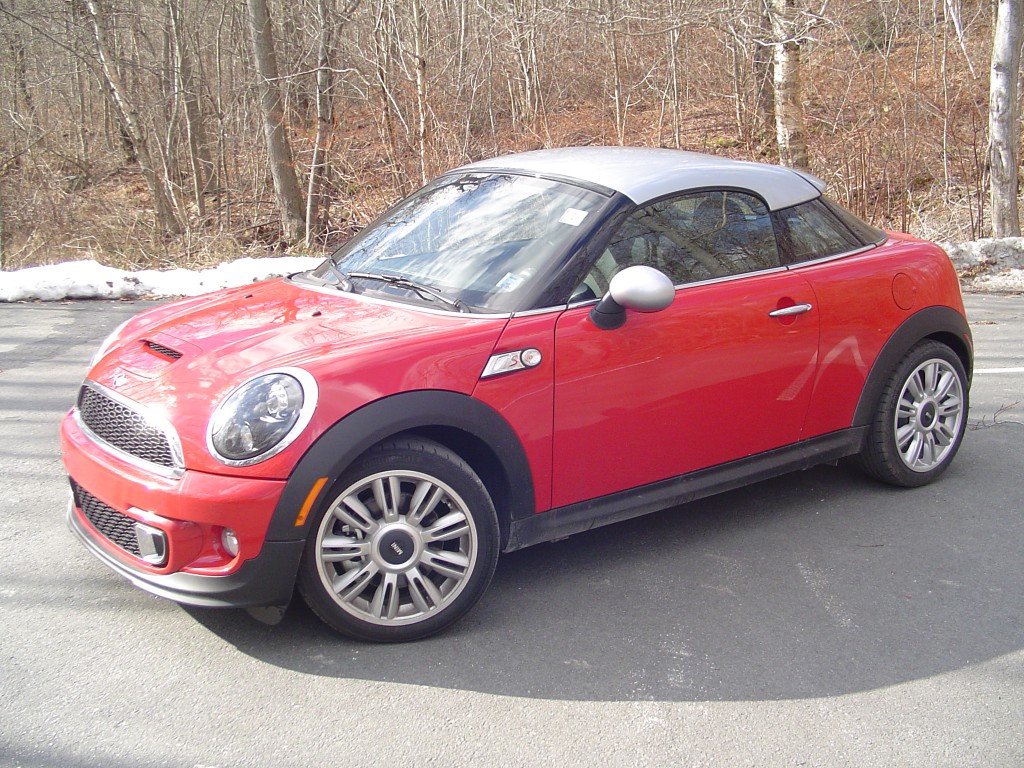 For my very first job I had the distinction of being recognized as an artist. Hold your astonished acclaim for me because I was the type of artist that had their title sown onto their shirt. That’s right, according to Subway, I was indeed a ‘Sandwich Artist’.

It was by no means a job I’d recommend to anyone, but it worked well for a gawky teenager still in high school – I didn’t come home with french fry grease all over me for instance, just the undesirable smell of onions and pickles. But I did meet a lot of interesting characters, not least of which was a regular who came by every day for lunch.

This woman intrigued me because at no point during my sandwich artist days was I ever able to figure her out, mainly because of what she always ordered.

She always requested a footlong veggie and, believe it or not, all she got on it was cheese, extra mayo and about half our container of olives. That’s it. My fellow sandwich artists would always be disgusted by her order, but I was just more dumbfounded. Why would anyone get just one toping when you can get unlimited topings at no extra cost?

This happens from time to time in the car world too and BMW has lately dabbled in the same sort of puzzling territory. When the X6 first debuted my immediate thought was why would someone want a less practical more expensive X5?

And now they’ve gone and done it again with their Mini brand with the Cooper coupe. Why would anyone want a less practical more expensive Mini? I drove one to find out. 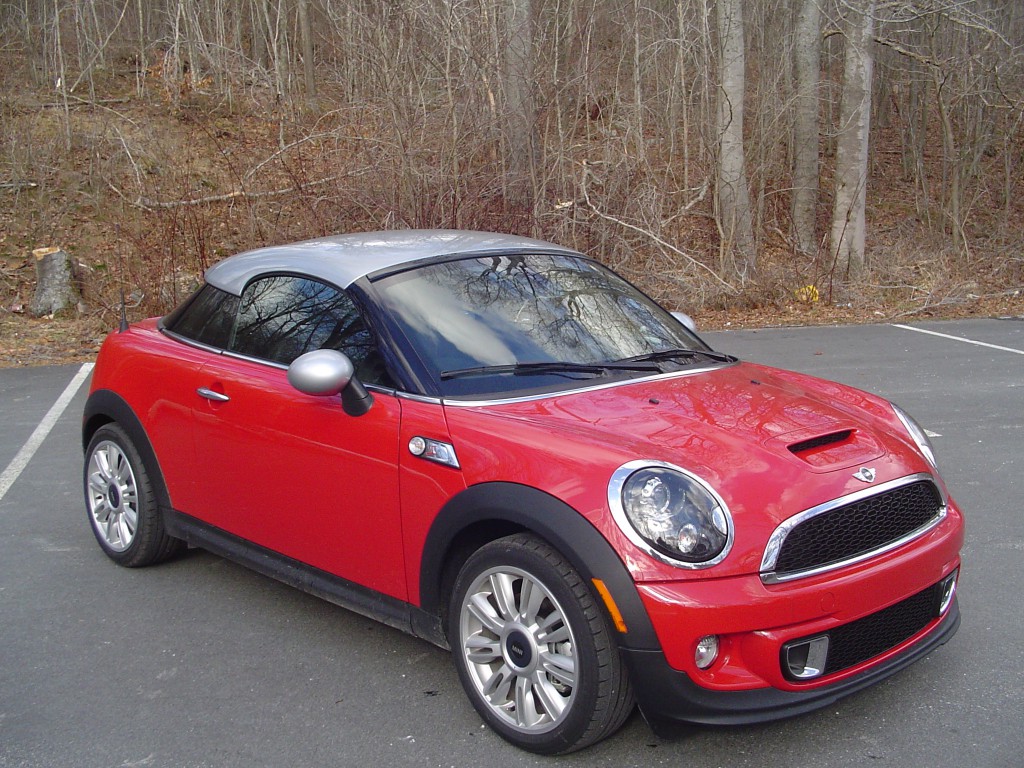 The thing with modernizing retro designs is that you can only do so much before upsetting the fan base. As such, it’s clear BMW didn’t want to alienate said base as they’ve essentially kept the Cooper’s front end, different coloured roof and similar tail lights for the coupe, all while completely distinguishing it completely with a much lower roof line, a noticeably lowered stance and distinguished 17 inch wheels. 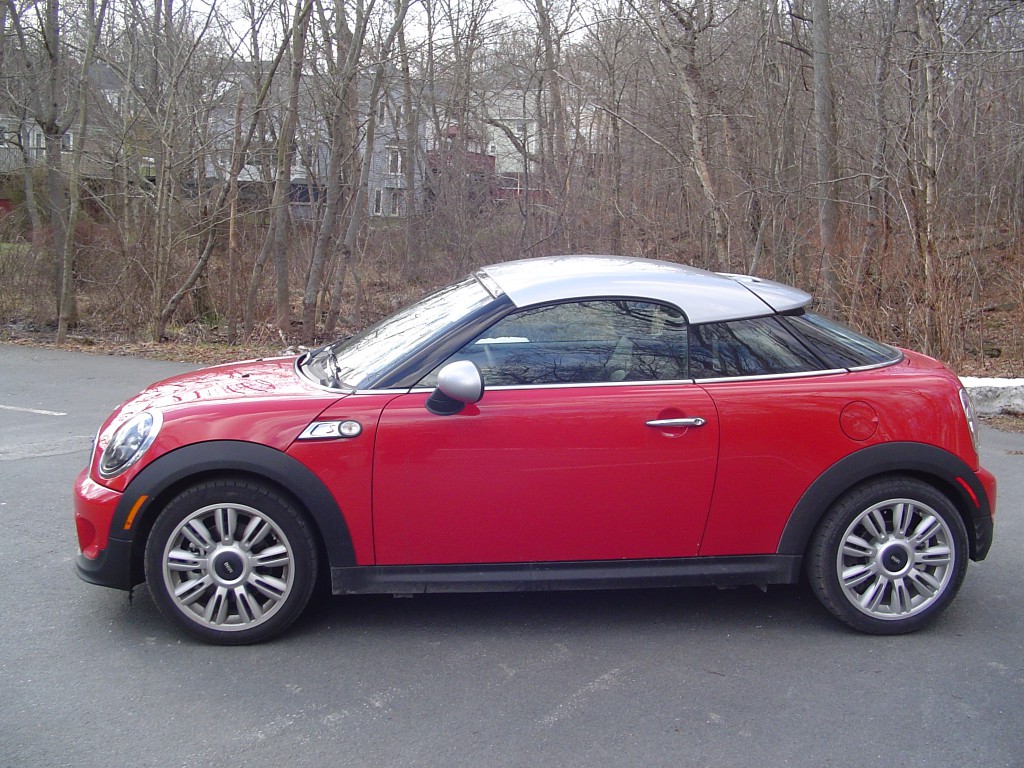 This is a much sportier looking car which is what a coupe is supposed to convey, but it can look awkward from certain angles with that arake backside. It’s almost as if BMW didn’t really know what to do with the back of the car so they just stopped trying. Regardless, there is no design like it today and as a result it certainly generates lots of stares, which I’m sure was helped by my tester’s bright red paint. For the most part they were stares of admiration and they largely came from middle aged women – a market I’m sure BMW did not intend to penetrate when they conjured up the Cooper coupe. I’m still not sure if this is a good thing or a bad thing. 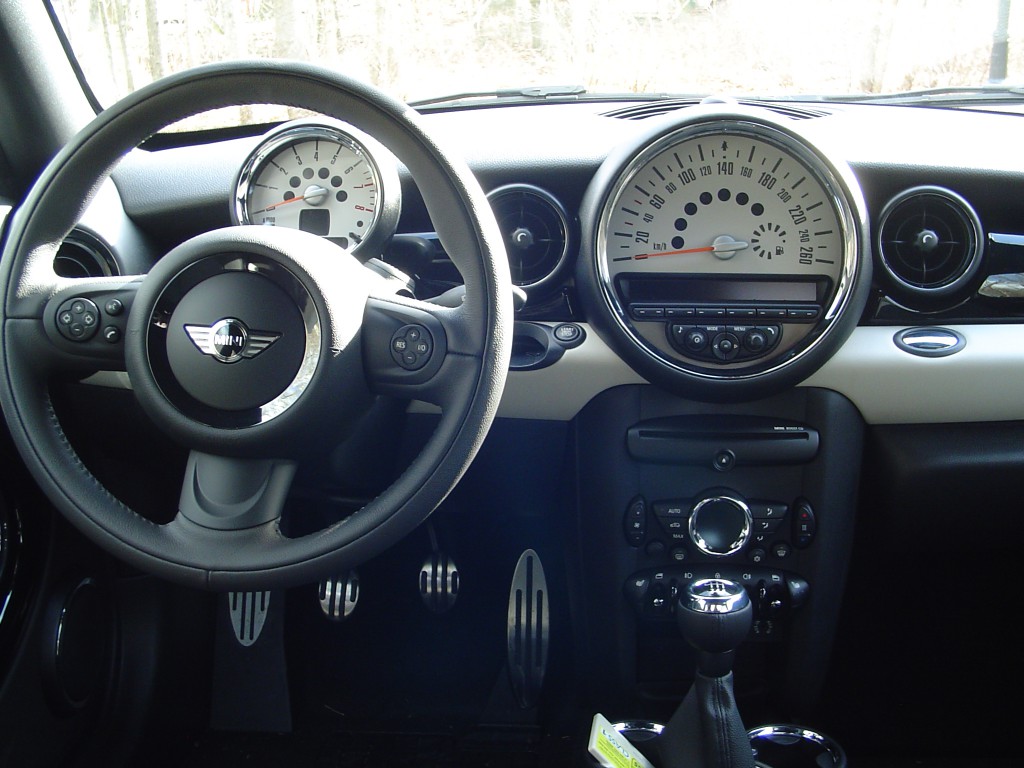 Inside everything is very much familiar to Mini fans as everything is largely unchanged from the regular cooper. A few sporty black accents can be found along with typical high quality materials and a quirky centre stack layout. 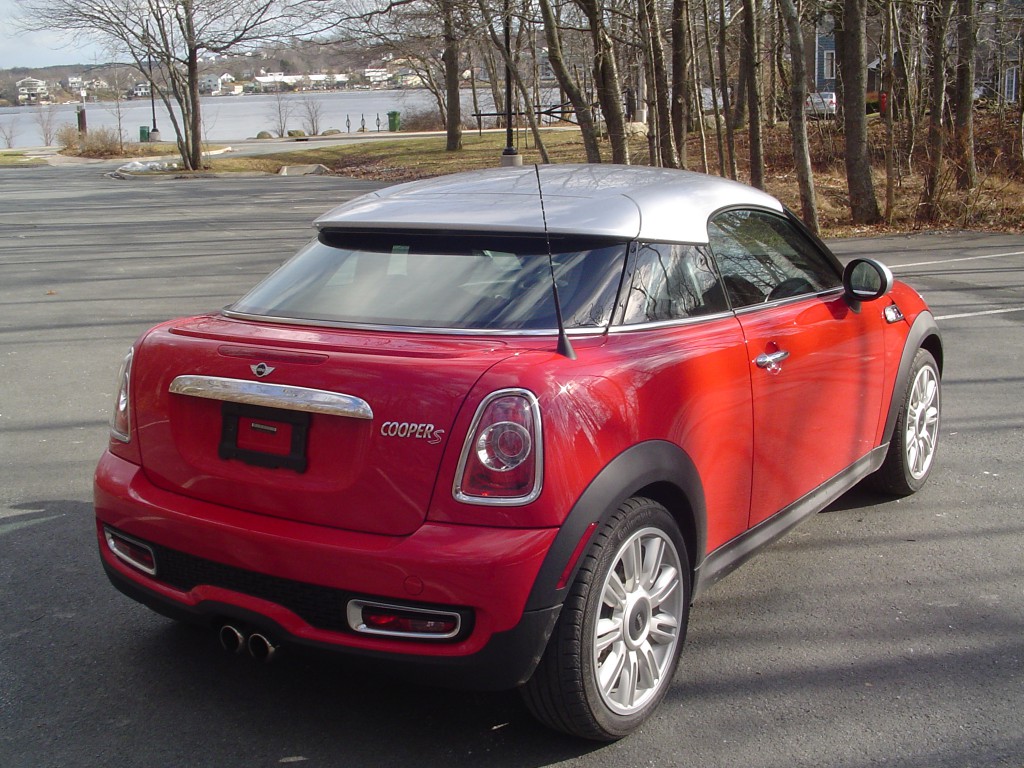 If you are claustrophobic run far away from the Cooper coupe. The regular Cooper was by no means stadium-like inside but the large windows helped to open up the cabin, whereas the coupe’s low roof and shapely design means not much outside light gets in and, as a result, outward visibility can be difficult when checking blind spots or looking through the tiny rear windshield (which by the way is so sloped that it could really use a rear wiper). While a rear back-up camera could be helpful, the coupe is still easy to park due to its hasty size. 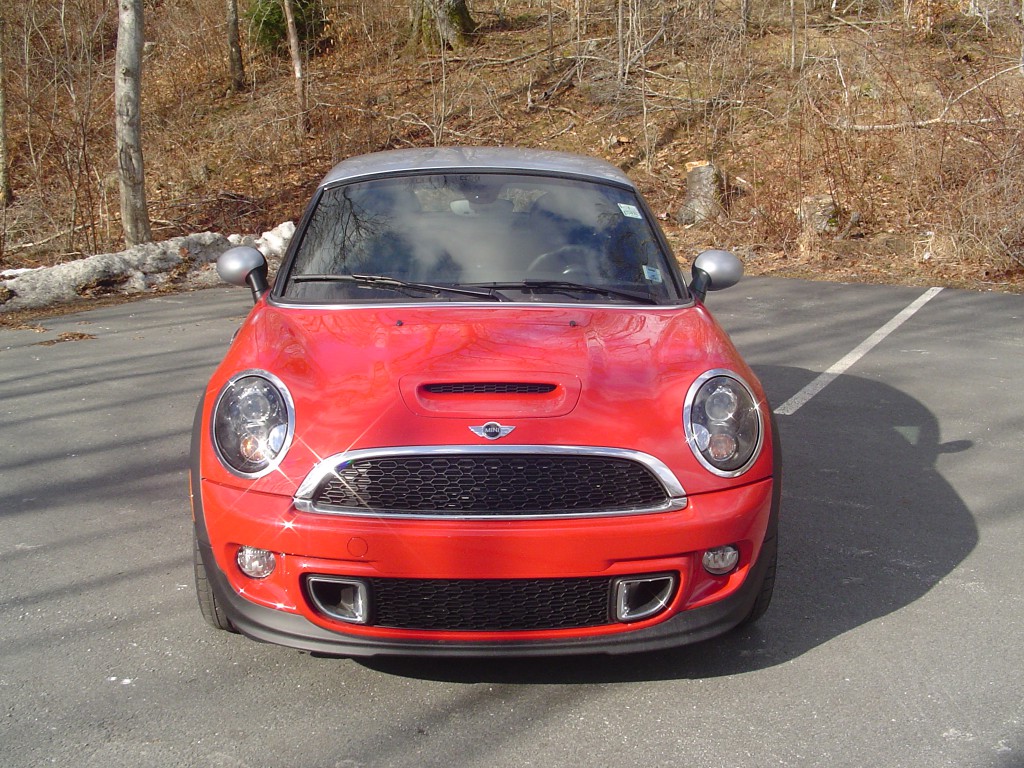 That low sloping roof means sacrificing the two rear seats found in the regular Cooper so the coupe is less practical as well, however its saving grace is that the cargo area is actually bigger than the Mini Cooper hatchback. There is also a ski-pass through for larger items. 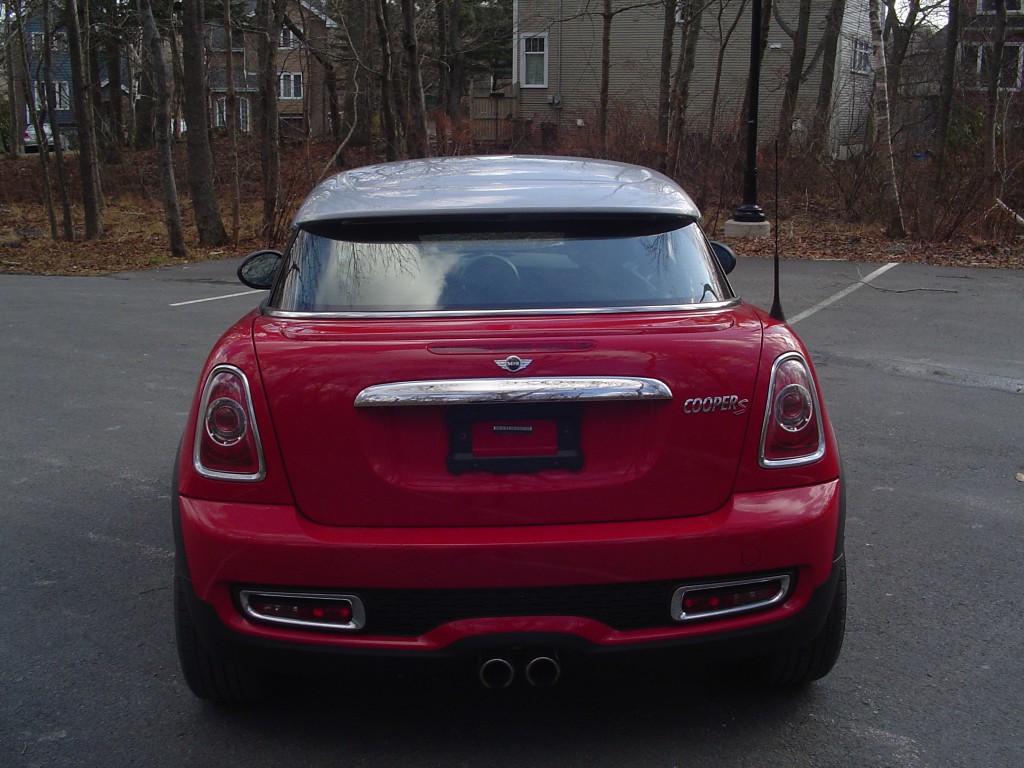 My tester gave itself away as the Cooper S model as evidenced by the two exhausts in the centre and the functional hood scoop which feeds air to the 1.6 litre four cylinder turbocharged engine. It produced 181 horsepower and 177 pound feet of torque. That amount of power in such a small package translates into some unintentional spirited driving. It’s hard not to take advantage of instant power available at low rpms, and the six-speed manual really helps you to take advantage. Shifts are fairly smooth, however the clutch can take some getting used to. There’s serious pull once you shift into second with virtually no torque steer to be found. At around 80 km/h an spoiler pops up automatically. While it impedes vision through the already small rear windshield, it is likely much appreciated to keep the coupe stable and from flying off the freeway. It’s possible to keep this spoiler stationary, but I imagine the coupe looks quite ridiculous with the spoiler up. 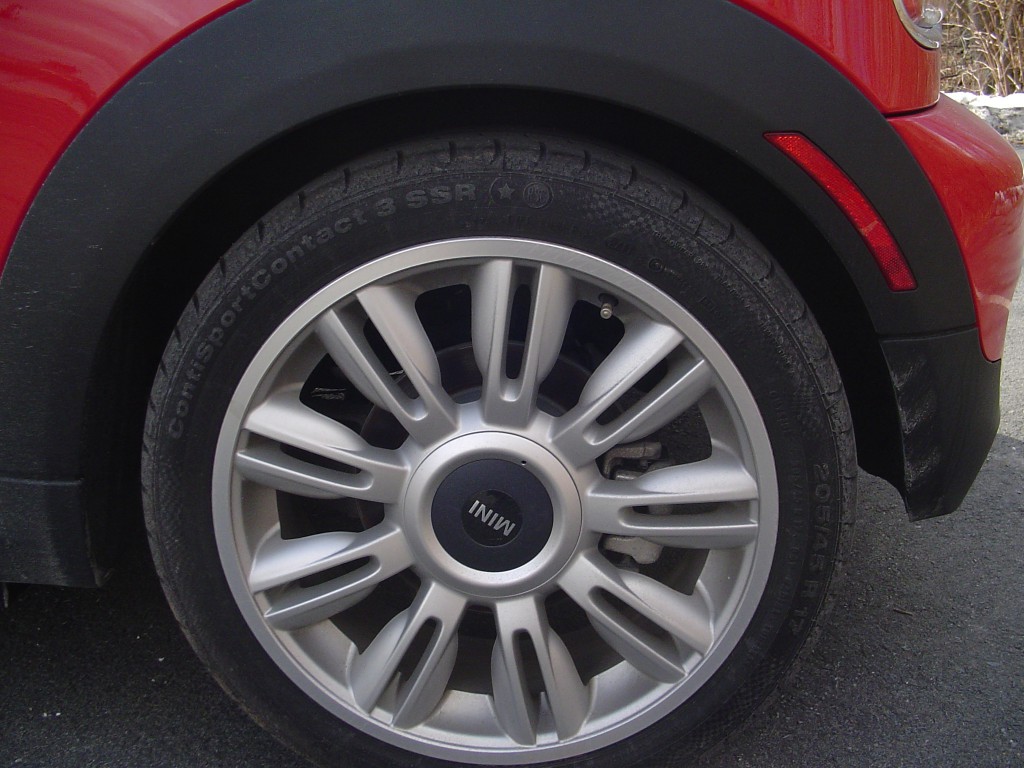 My tester also came with an optional sport package which includes 17 inch wheels, grippy tires and a firmer suspension. Let’s just say that if you can tolerate a stiff ride, make sure you check off this option.  If you don’t you’ll be missing out on having a ridiculously goofy grin on your face every time you take a corner. To say this thing is planted is an understatement to be sure. Those wheels being pushed out to the corners essentially means you can flog the Mini about with complete peace of mind. There is slight understeer when cornering at higher speeds, but it’s easily correctable. This is probably the most fun you’ll ever have in a car of this size short of a go-kart. 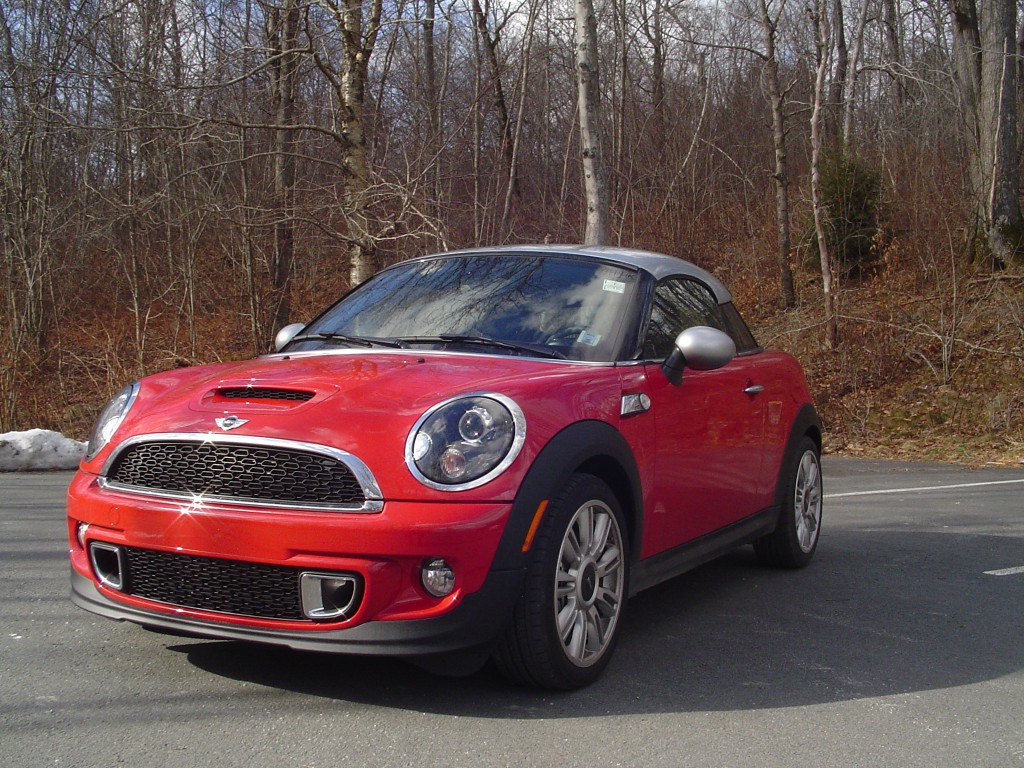 And that’s when it hit me. Mini built this coupe because it’s so crazy that you just have to love it. It’s a bit like, oh, I don’t know, ordering a sub with a just a mountain of olives on it from Subway. In fact, one day I actually asked her about her unusual choice. Her reply?

“Why not? Olives are the most flavorful thing you offer and it’s a bit of a rush to just eat a bunch at once. Besides, no one ever thinks to do it” 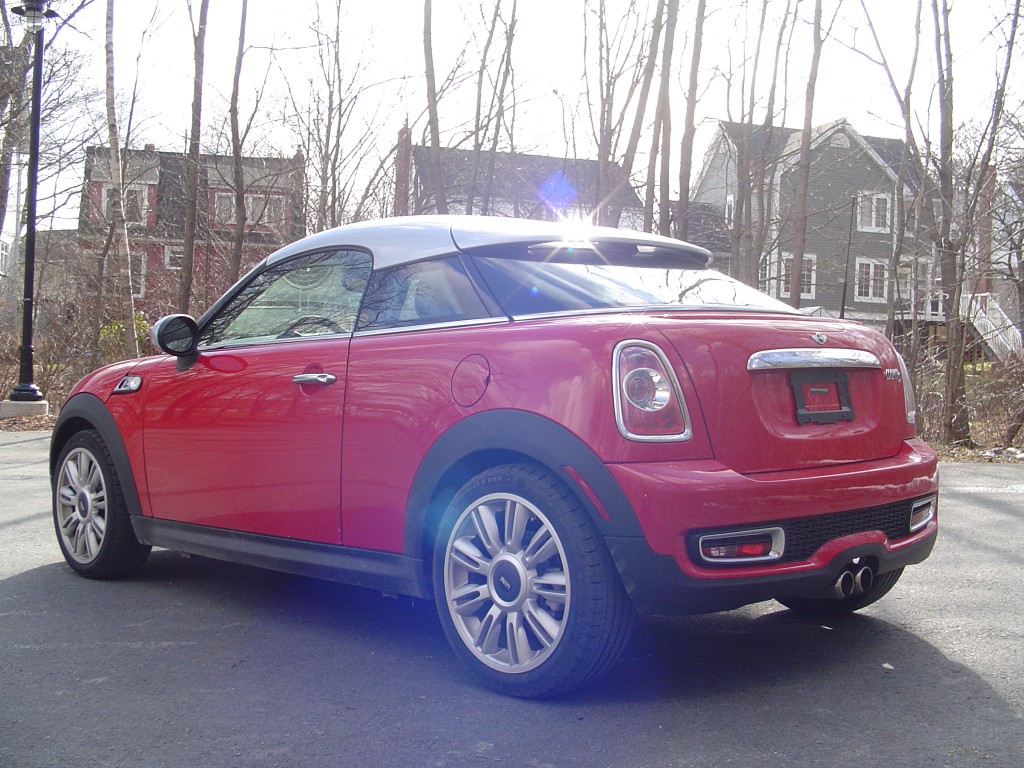 While you might be thinking to yourself ‘no one ever thinks to do it because it’s disgusting’, and truthfully you’re probably right, she does indeed have a point. If the most flavourful model in a manufacturer’s brand is dull, then you’re really doing it a disservice. The Cooper S coupe is easily one of the most radical thing that no other brand has thought to do. It is the most flavouful and it certainly gives you a rush. Who cares that it’s not as practical, perhaps not as good looking, or as cheap as a regular Cooper S. If you think that way, stick to your typical lettuce and mayo and buy the regular Cooper S. This car is not for your personality. 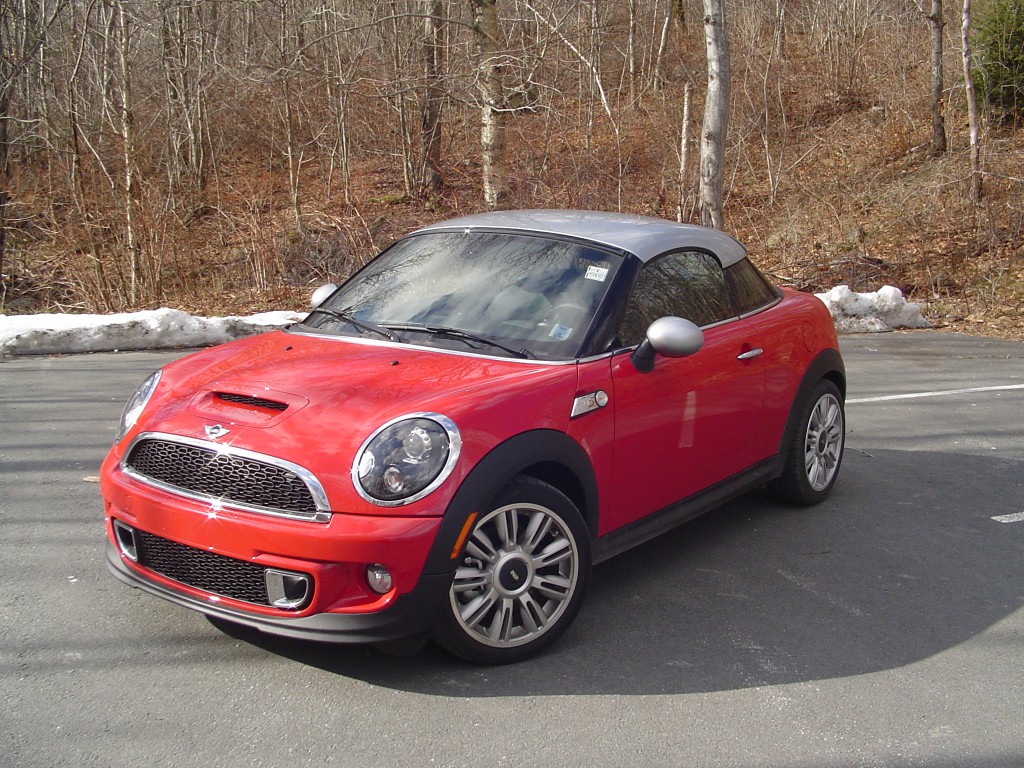 If, however, you are crazy like my regular olive-obsessed Subway customer, BMW is eagerly awaiting you at your local dealership with keys in hand to the Cooper S coupe. This is a niche market and BMW has filled it nicely. The only thing better? The John Cooper Works edition of the Cooper coupe. I can only assume that it is like ordering a sub with just jalepenos. The full monty.