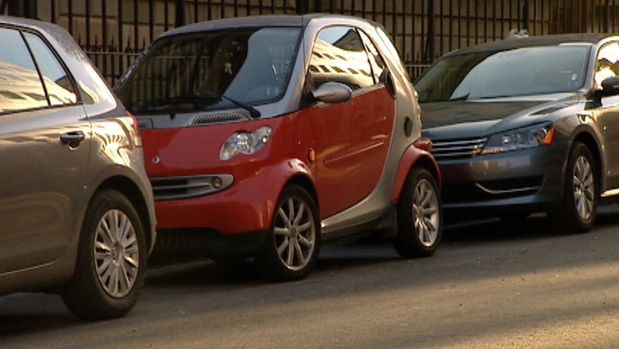 It’s a sight you’ve likely seen before: a Smart Fortwo wiggling their way into an impossibly small space. However, for one unlucky Smart Fortwo owner, her regular parking squeezes is making national news.

Why? Well apparently CBC News originally did a story about how the owner, named Margot Melanson, is able to park in downtown Halifax for free each day by squeezing in between metered parking spaces (pictured above is an example of how Melanson does it). Halifax, like most cities, can be expensive to park, especially downtown.

“It’s like I have the primo sweet spot,” Melanson told CBC News. “I have parked here sometimes when there’s just six inches on either end.”

In fact, Melanson has only been issued one $25 ticket so far. Still, her sneaky parking trick is technically illegal.

“The front of the vehicle can’t be farther than one metre from the rear of the parking meter,” said Michaelyn Thompson, a spokesperson for the Halifax Regional Municipality. As a result, a ticket can be issued.

At this point you’re likely concluding that this is barely a news story at all, let alone a national news story. Well, Melanson received unexpected backlash in the comment section of the story published online. While she has a few supporters, most were infuriated that Melanson was doing this each day. The story then blew up from there.

After receiving harsh criticisms and even threats, Melanson now parks in a parking garage a few blocks away.

“I was truly afraid to bring it downtown today. I was frightened someone would do something to it,” she said referring to her beloved Smart car.

My personal feeling on the matter is if it’s illegal, then a ticket should be issued. Just because a vehicle can fit in a certain spot, doesn’t mean that it’s fair game to do so.

With that being said, I do believe that targeting any vehicle(s) simply because of a reputation it may hold or the reputation of its owners may hold sets precedent for dangerous stereotyping. For instance, not all BMW owners are swingers, not all Prius owners are tree-hugging granolas, not all Volvo owners are white bearded men and not all Smart car owners are trying to sneak their way into free parking. We as a society cannot and should not make someone feel afraid simply because of the type of vehicle they own or because of the choices they make with their vehicle. I believe that Melanson was wrong to park illegally but the fact that she fears her car will now be targeted and even she may be targeted means that we are taking our reactions too far.

This woman did not murder anyone, she tried to get away with free parking and that’s it. While I understand the anger and frustration that from those of us who park legally and pay every day to do so, it’s quite childish and immoral to make someone feel like an outcast of society because of a minor offense.

Besides, why does no one react as strongly when motorcycles park the exact same way in the summer?

The fact that I’m even writing about this means I’m lending more credibility to the story than it deserves, however after reading some of the harsh and borderline bullying comments on this story, and considering how serious of an issue bullying has become in our society today, my moral fibers felt the need to speak out. Well, that and because it’s car related. And we all know I love cars.

Anyway, let’s all just chill out about this one. Deal?