The latest advertisements from General Motors on the Chevrolet Colorado are a bit telling.

Putting aside the fact that enforcing stereotypes about either gender should be well beyond any company (seriously GM, how did you give your marketing department the green light with an ad like that), the ad itself shows might highlight a problem that GM wants to get ahead of.

You see, the first generation Chevy Colorado was put on hiatus a few years ago. Ford and Chrysler followed suit by canceling their mid-size truck offerings claiming there was no longer a market for it. But I have a hunch that it was more than that, at least for GM. I have a feeling that men who bought GM trucks considered the Colorado not to be a ‘real’ truck. The small size may have denoted that it wasn’t really a ‘manly’ truck.

So, when re-entering the market, GM grew the size of the Colorado in the hopes of retaining loyal Silverado owners and attracting new buyers. GM must know something we don’t about the types of people who purchase trucks. It’s not really a stretch to think that males often buy trucks more often than females. 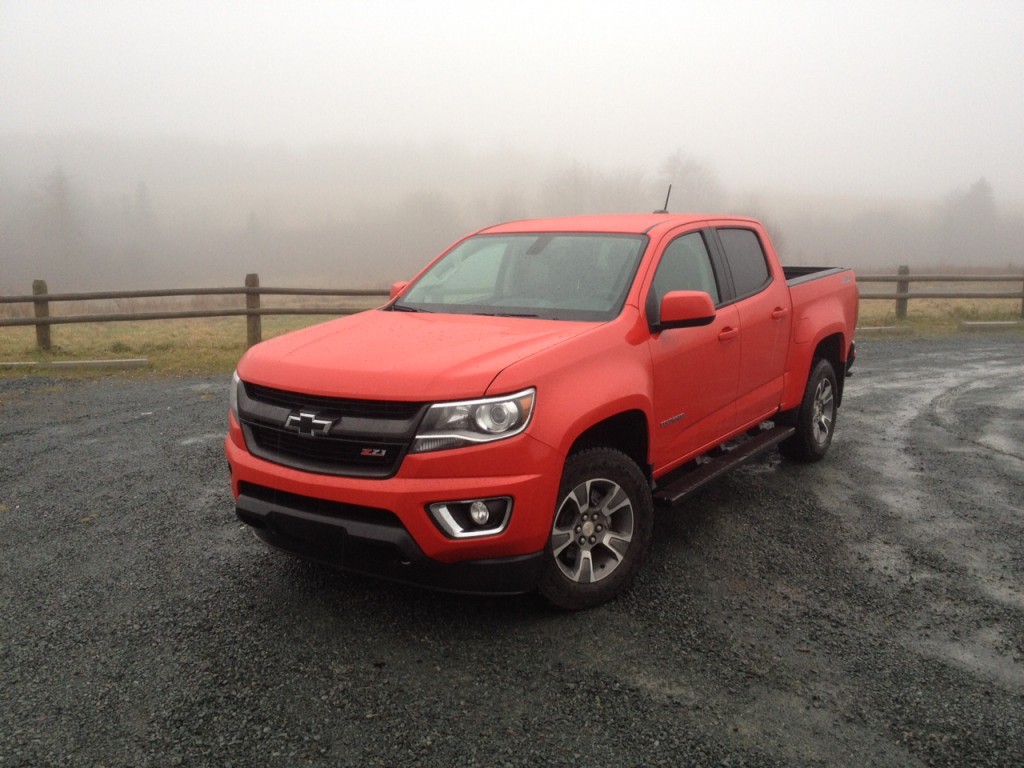 GM also wanted to make sure it had a masculine look and I don’t think there’s any denying that it’s a good looking truck. The Colorado’s front end is not only unique looking from the Silverado, but it’s decidedly sportier. My tester’s Z71 package gives it and unique grille, rather nice looking 17-inch alloy wheels. Around back, GM took the opposite approach that they did with the front end. The rear looks nearly identical to the Silverado with the same tailgate and tail light design. While I would prefer a more unique rear end, it’s safe to say that this is one of the best looking trucks on the road – a look that is sure to please the tastes of truck buyers globally. Other visual cues fitted to my tester was black badging and side step rails. 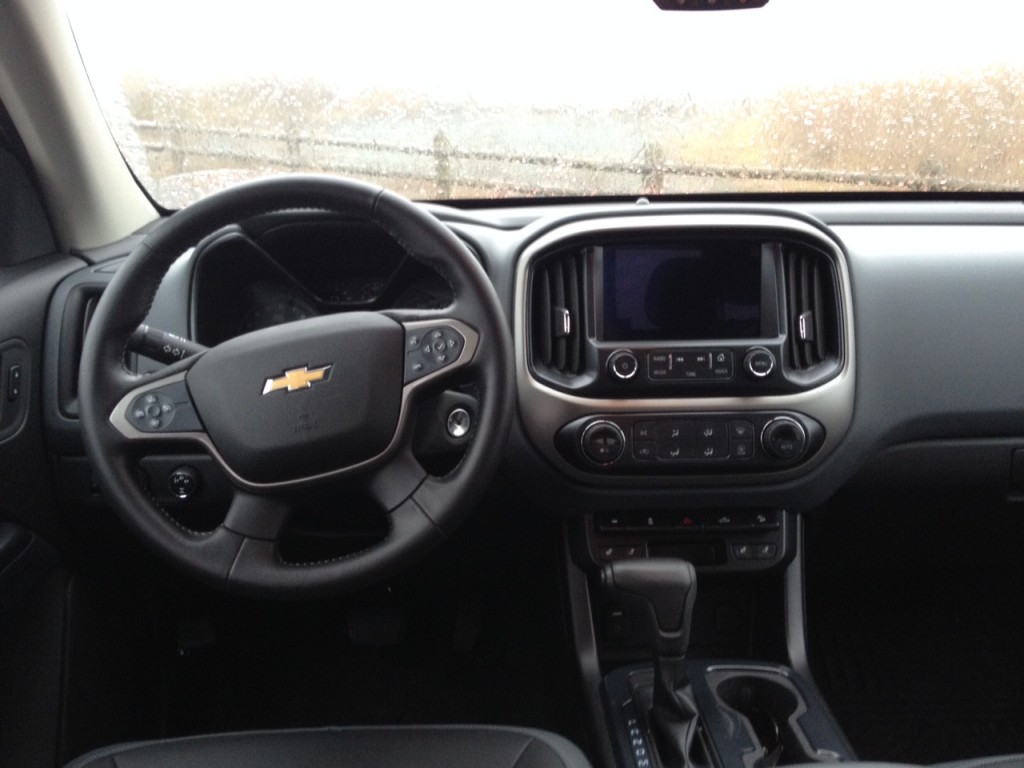 Speaking of, do yourself a favour and don’t check off the side step rails on the options list if you’re buying a Colorado. They are completely unnecessary. In fact, they are so unnecessary that it actually makes getting into the truck harder than if they weren’t there at all. Since the Colorado doesn’t have nearly the same height as the Silverado (nor the same tall cabin) so when you step up on the side step your head is actually taller than the roof. That means you just fall into the seats rather than get into to them. 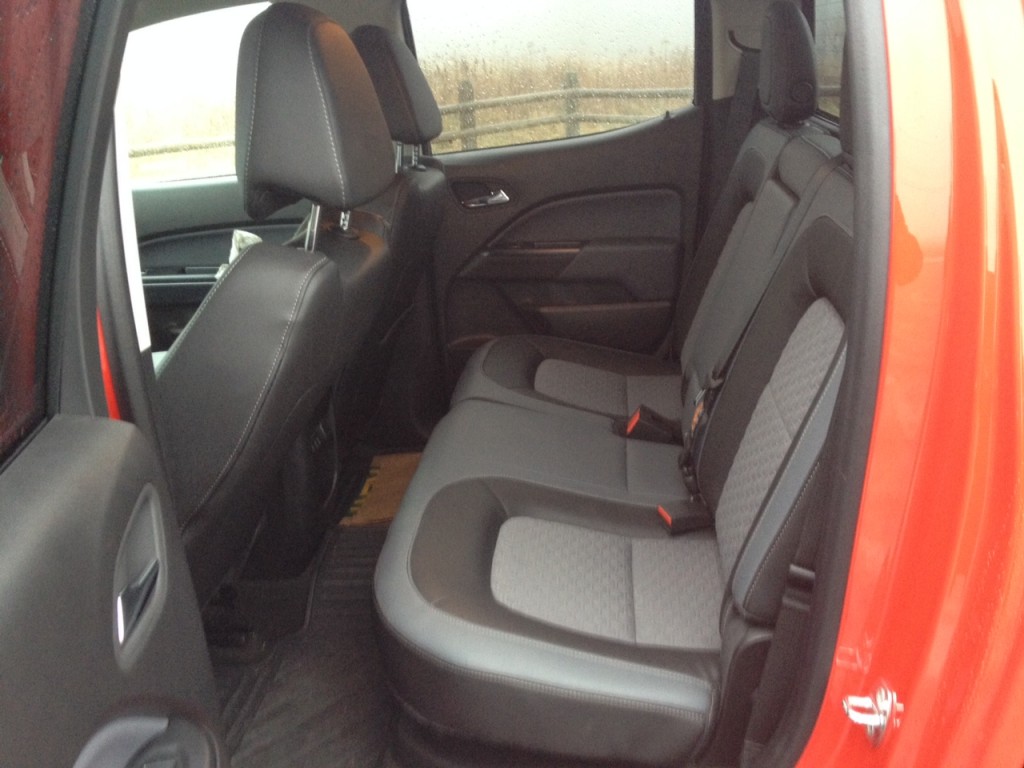 Once you’re inside though, it isn’t a bad place to be. It is a bit on the spartan side but you can always opt for the Colorado’s twin, the GMC Canyon, which has a bit of a nicer cabin. That isn’t to say it’s a bad interior though, the layout is logical and there’s plenty of room. The infotainment system isn’t bad, there were a few times when it didn’t respond to commands but overall it does the trick. In crew cab configuration the Colorado offers plenty of room and versatility. The bottom cushions of the seats can fold upward making it easy to carry taller items. 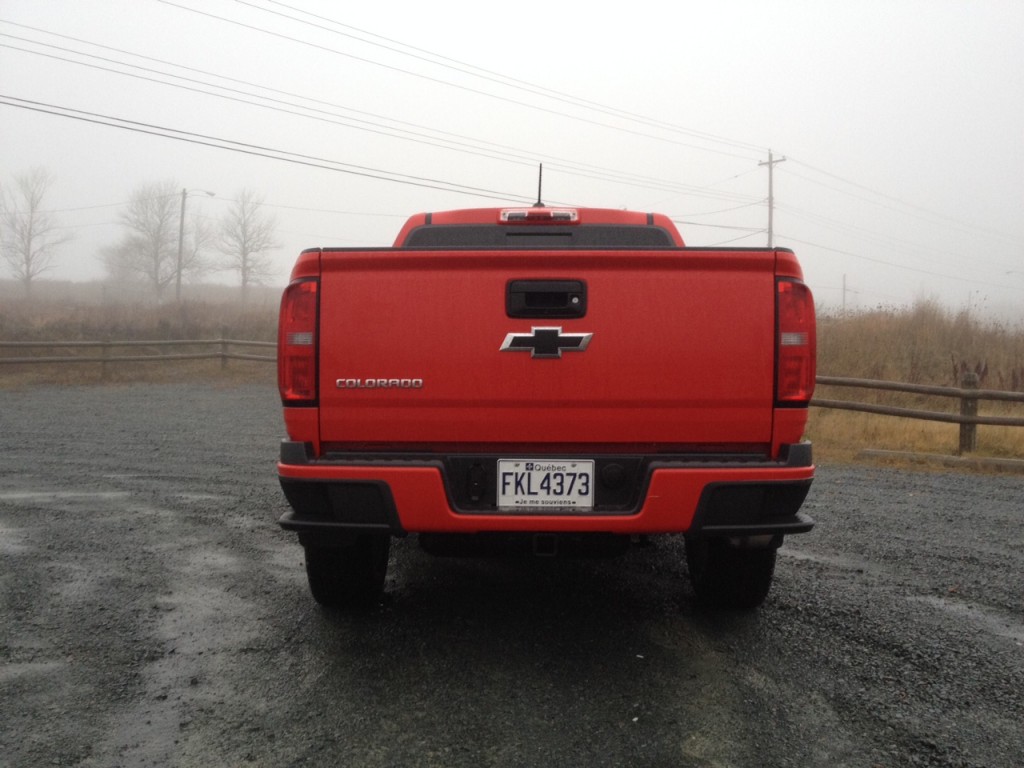 The only downside to the crew cab is getting a shorter box length, however you can configure the crew cab with a six-foot bed if so desired. Even though my tester had the five-foot bed, it still was able to haul some sheets of plywood and it handled two Christmas trees at the same time with ease. GM put the same indentations into the bumper that are found on the Silverado making it fairly easy to get into the bed of the truck. It’s also easy on the muscles thanks to a damped tailgate. But then again, damped tailgates aren’t really all that manly, are they? Hmm. Regardless, the damped tailgate is appreciated, however one of the tethers always seemed to pop out of the seam and would awkwardly stick out. I didn’t notice this issue on the GMC Canyon I tested earlier this year. 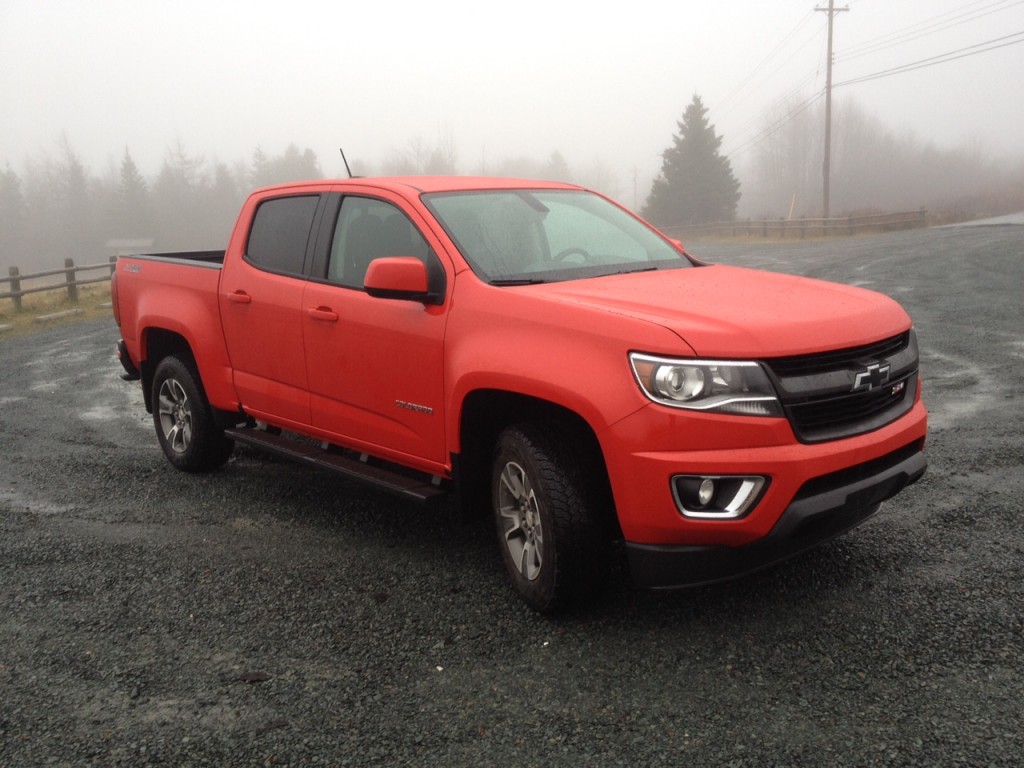 You can option the Colorado with three engine choices: a diesel, a four cylinder and a six cylinder. My tester was equipped with the later. It produces 305 horsepower and 269 pound foot of torque. However, while it’s a powerful mill, it doesn’t feel really all that quick. Luckily the six-speed automatic pairs nicely with it as shifts were predictable and smooth. With that being said, this isn’t the engine you want. You want the diesel engine because a) it isn’t built by Volkswagen (sorry, I couldn’t resist that job) and b) it will give you all the torque you need and would expect from a truck, all while delivering above average fuel efficiency. 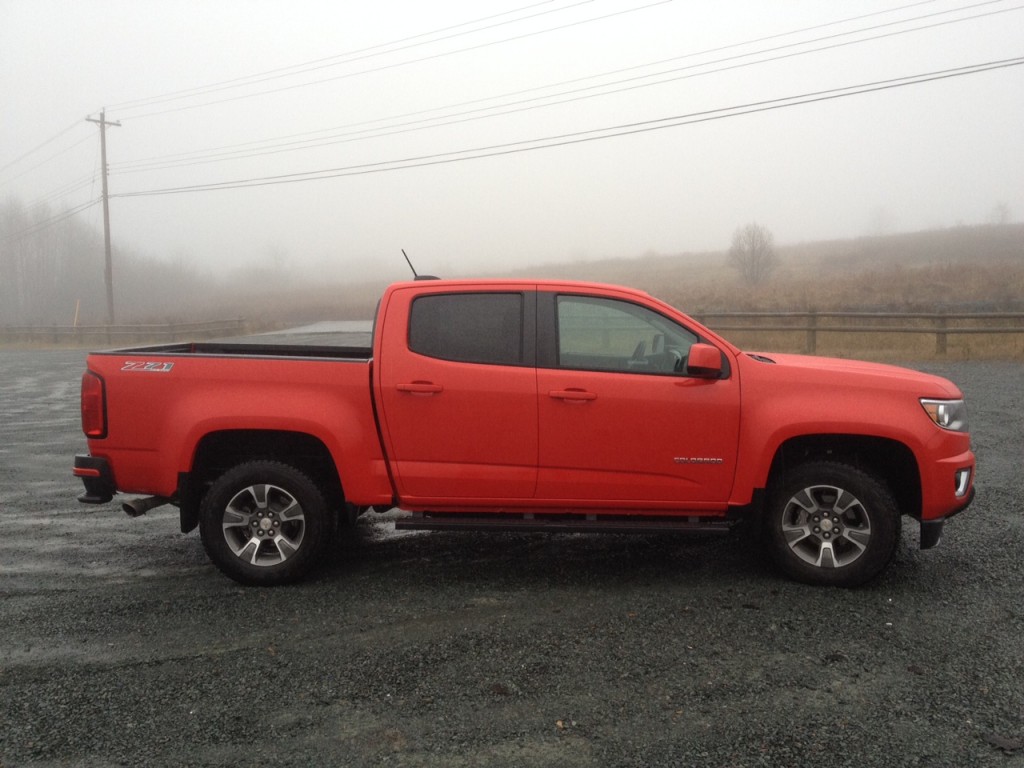 And that would be an added bonus considering the Colorado with the V6 is rated at 13.5 L/100 kms city. For a mid-size truck, that isn’t the greatest. Luckily, I was able to beat that rating as I observed 12.1 L/100 kms is mostly city driving. The Colorado’s official rating for the highway is 9.8 L/100 kms. 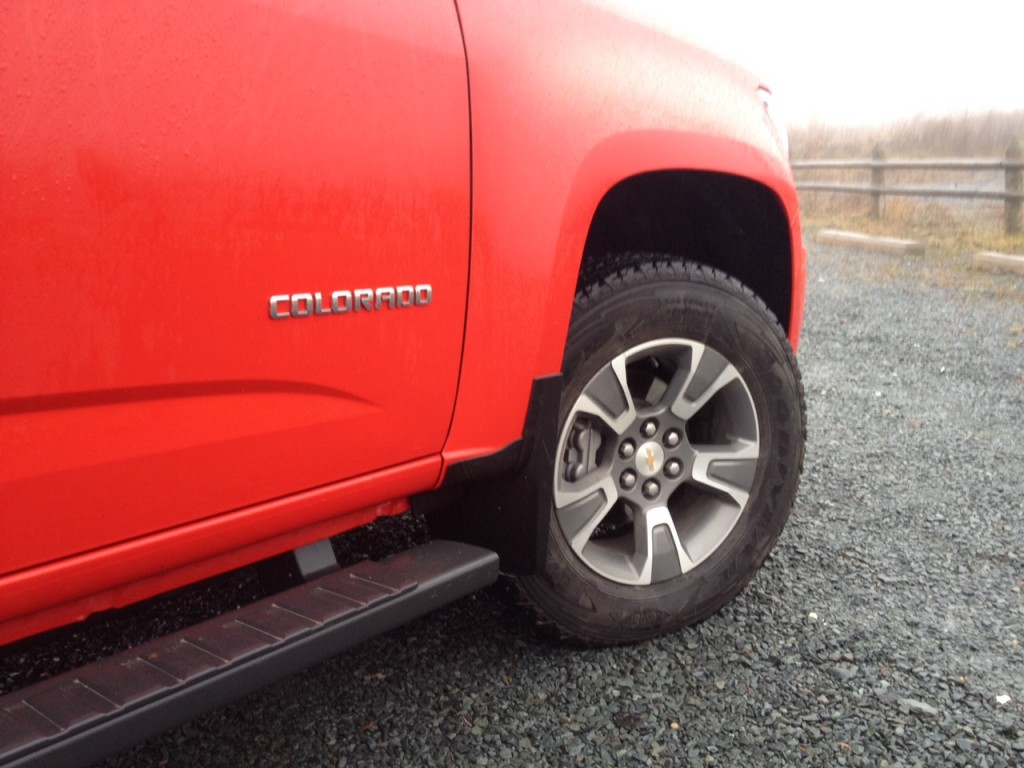 On the road, the Colorado is easy to drive around town thanks to its smaller size. Comfort is decent too and so is handling, but there was quite a bit of road noise coming from the off-road tires. I got used to it though and was glad I had them as I did a little bit of light off-roading. The Colorado was competent and handled most obstacles with ease. 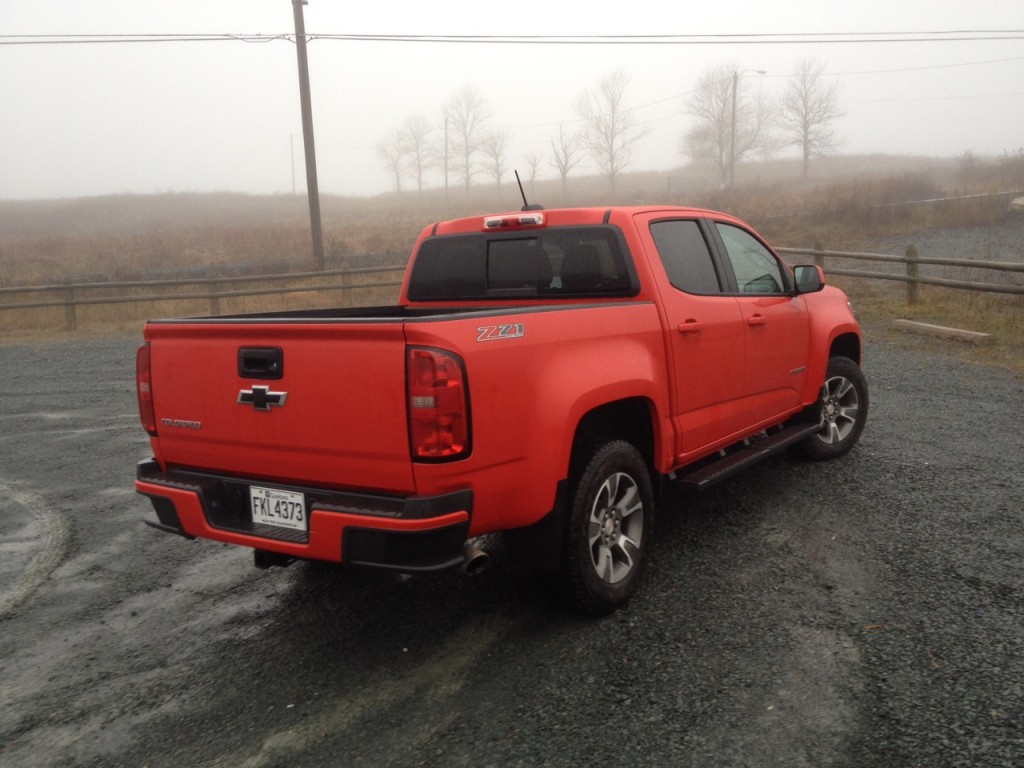 While the Colorado is arguably the better truck, I think I’d still pony up the extra bit of cash to get its brother, the GMC Canyon for the nicer interior. Then again, with its over $40,000 as tested price, I would probably just get the full-sized version. It’s not as if you’d be spending noticeably more on gas, and you would get a lot more room. Not to mention the satisfaction of knowing you were driving a “manly” truck. Because apparently that’s what GM wants us all to care about. That said, if you equip the Colorado with a diesel then there could be a case made for it. But with Ford and Chrysler out of the picture for now and the Toyota Tacoma getting more of a visual update than anything else, matched with the ancient and aging Honda Ridgeline and Nissan Frontier, the mid-size GM twins are the clear winners in the category so far. 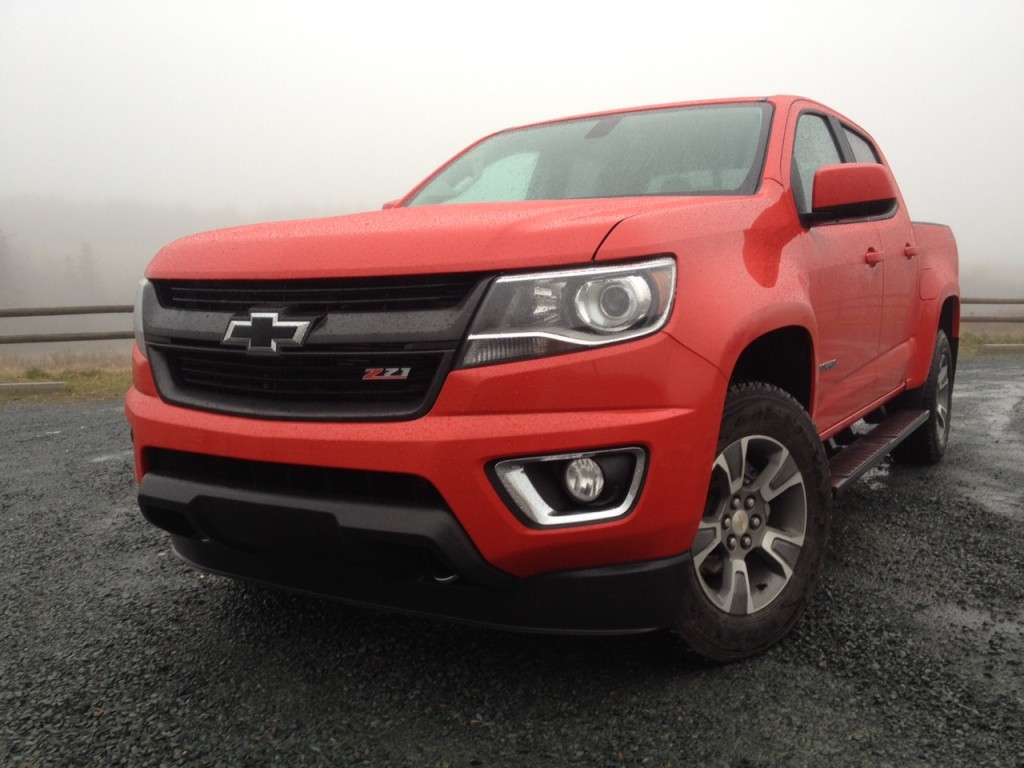