Mitsubishi is either really smart or they are desperately lagging behind the times and to be honest, I still can’t figure out which is closer to the truth.

You see, the small Japanese automaker is still kicking in our market, despite the fact that it makes some questionable decisions.

Take the Mirage, for example. On paper, the Mirage seems like a smart move for our market since we love small affordable hatchbacks. The Yaris, Fit and recently the Nissan Micra have all been taking a large slice of the pie for years and Mitsubishi wants in. So why did they design something that looks like a blob on shopping cart wheels with features (or lack thereof) that makes you think you’re driving a car from 1985?

Then there’s the Lancer which is a surprisingly capable vehicle but the design is now getting long in the tooth and is getting no help from Mitsubishi’s marketing department all while the jaw dropping performance laden Evolution model gets dropped from the line up as of next year. Why? Why would you create something that is as good as the Evolution is and just decide to stop? Is it to end on a high note?

Again, either Mitsubishi is onto something we’re all not privy to, or they see the world through a rose coloured lens.

And then there’s their latest product, the Outlander. This is the third generation and it is considered to be the direction the company wants to go in. I took one out for a week to see just how smart or behind the times the company seems to be. 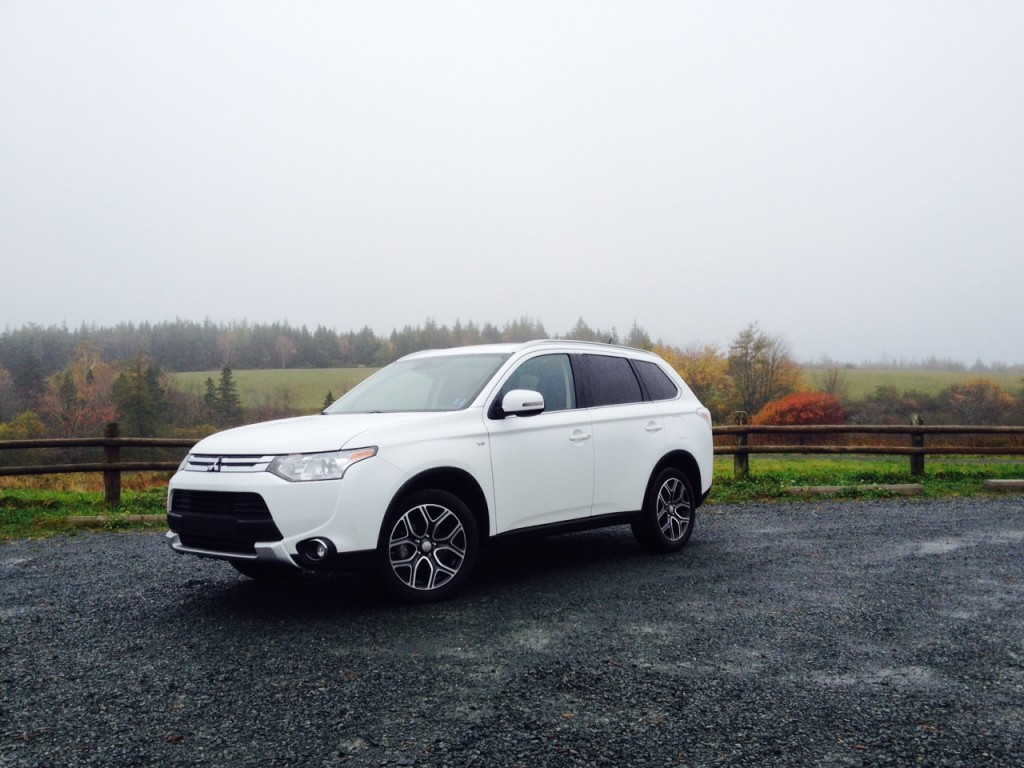 Lookswise, I am a bit disappointed with the Outlander’s design. The second generation had a shape like no other and when Mitsubishi smartly face lifted it back in 2010 to don the nose of the Lancer, it looks even better. Now it seems like the designers were told to take a step back. While it’s still decidedly Mitsbishi, there’s no flare. From a far it looks like any other CUV on the market and when you get up close, the horizontal looking hood matched with this rather plain looking front end, it looks a tad awkward. For those of you with a keen eye, Mitsubishi actually softened the grille for 2015. And those altezza-styled tail lights were pretty cool in 2001, but they seem grossly out of place in this decade. At least they are LED’s which are only available on the top GT trim. The wheels are also either good looking or out of place depending on your subjectivity, but it’s suffice to say that all things considered, this author prefers the styling of the old Outlander. 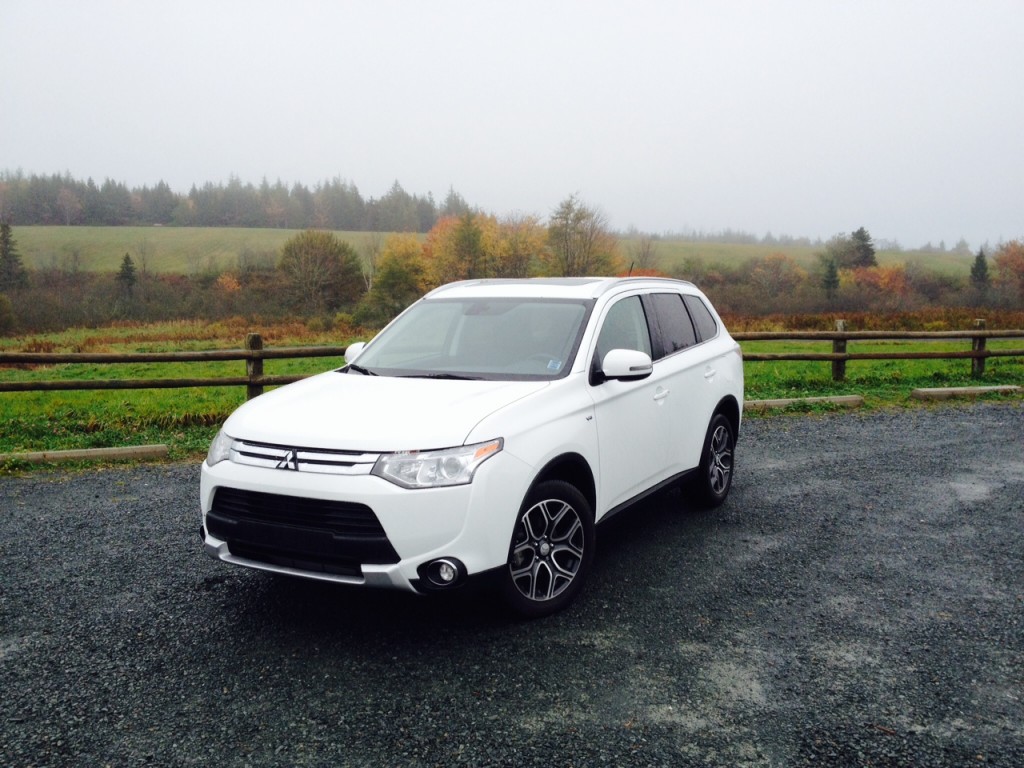 Then there’s the interior which, again seems dated. I’m reminded of 1998 when I get behind the wheel. The materials don’t feel plush, luxurious or high quality which is a bit of a shame because they’re not exactly low quality either, despite what your senses deliver to your brain. The design is simple – likely too simple – to the point of being boring and drab. The touch screen is a bit on the small side and it seems cluttered with information, though I will admit, I got used to it by the end of the week. 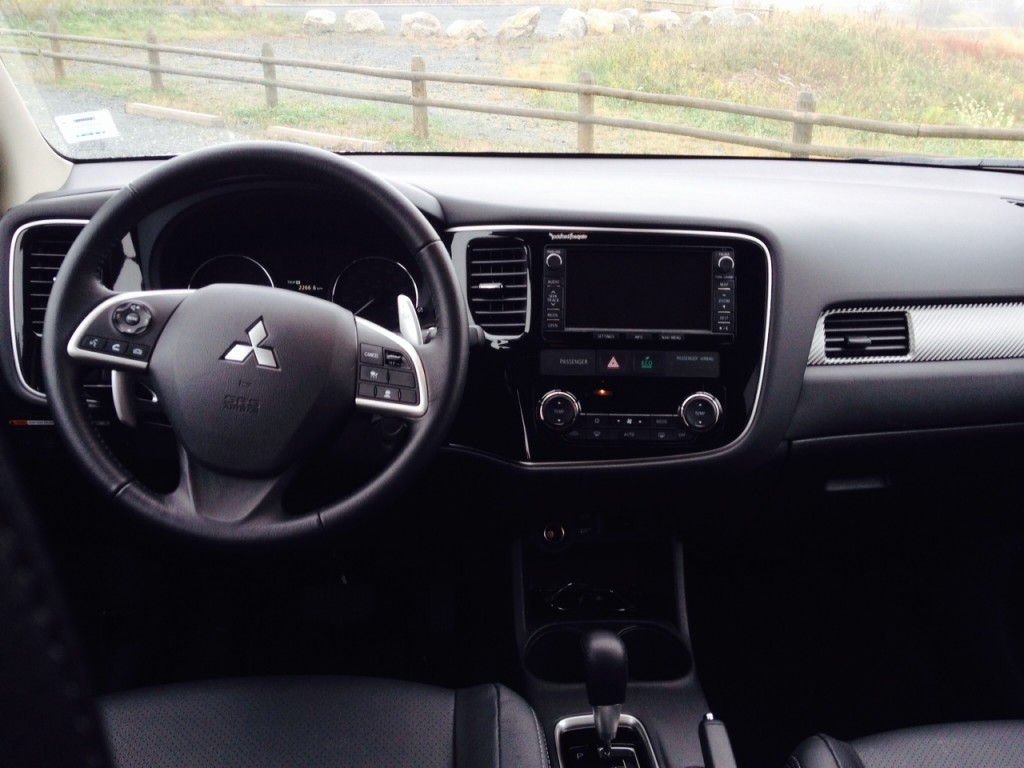 But it’s not all bad. Mitsubishi continues to be one of the only automakers that knows how to make flappy paddles for the gearbox. They know that the paddles must be attached to the steering column rather than the steering wheel. This ensure the paddles are exactly where you left them. When they’re attached to the wheel, they of course move with the wheel and suddenly your down shift paddle is on the opposite side of the wheel. Kudos for being one of the only ones that gets it, Mitsubishi.

There is also plenty of room for adults and children with reclining rear seats to help fit taller individuals. And lo and behold, there is a third row. This brings me to my original question of if Mitsubishi is smart or not. You see Toyota has recently dropped the third row option in its redesigned RAV4 as have a few others. But Mitsubishi is hanging steady with this one rather than following the trend. The third row seats themselves are meant for children only – seriously, if you have legs, you won’t fit. But my three and one year old nephews had a blast when I stuck them back there for the purpose of this review (I’m a great uncle, I know).  It was more than adequate for them and they loved the idea of being far away from mom and dad while still being within reach of them if need be. And here’s why I think it’s smart to keep the third row: there are still some families out there who could use the third row seating and who don’t necessarily need a minivan. Normally I’d advocate for those needing a minivan to take one over a more compromised CUV, but have you seen the size of minivans lately? They’re huge. Even though they have lots of interior space that can’t be beat, some families just don’t need all that space and driving the behemoths can be trying for some. The Outlander fits good space and versatility in a regular sized package. Well done. 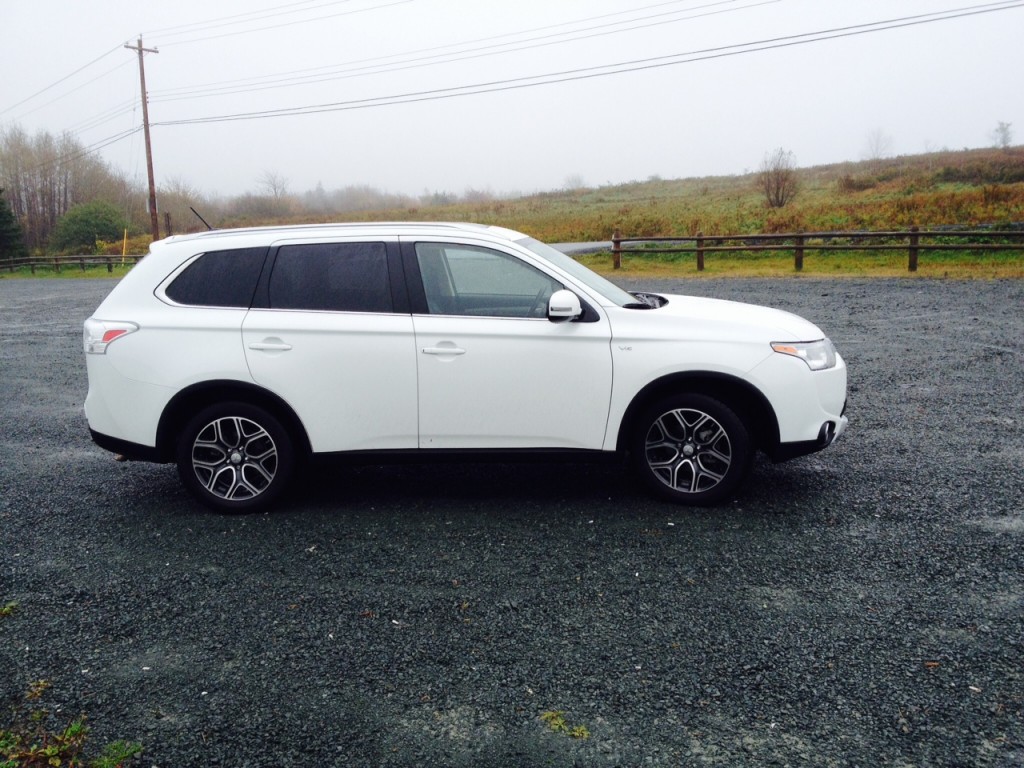 There’s one niggle to report, however. The automatic tail gate would not open automatically. I’m not sure if there was a safety lock system on, but myself and fellow auto journo Mark Stevenson could not figure it out for the life of us. Luckily the tail gate was still able to open the old fashioned way. 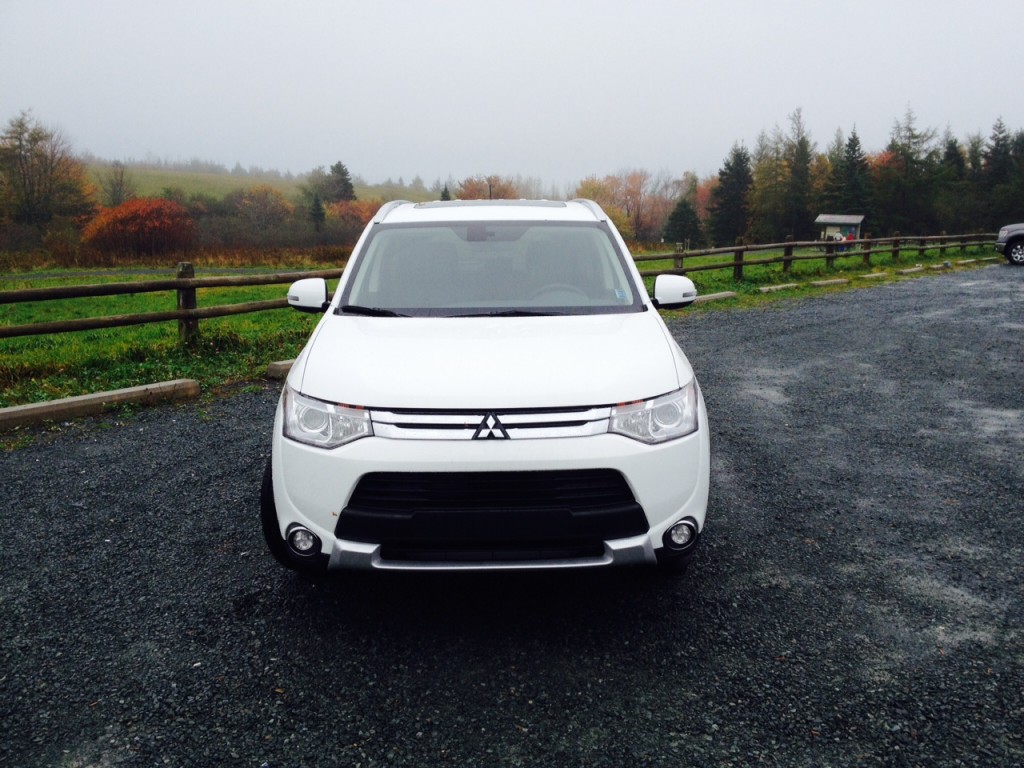 The other thing that has me scratching my head deciding if Mitsu is smart or not is their decision to go with a V6 in their top trim level. Lesser trim levels get a 4-cylinder with CVT and that’s the trend most in the segment are heading towards. But the Outlander GT is one of the only choices left in the segment with a V6. Why haven’t they gone the route of tuning a 4-cylinder to maximize power and efficiency like everyone else you ask? I’m not sure. The obvious answer is for more power but the Outlander’s 3.0 litre V6 only churns out 227 horsepower with 215 pound foot torque. Really? From a 3.0 litre V6? You’d think they would be able to extract much more power from such a mill. The result is rather tepid acceleration that only becomes interesting once you use the flappy paddles. That said, it feels powerful and it feels familiar thanks to that regular old six-speed automatic which is the preferred choice of any auto enthusiasts since CVT’s are clearly the devil. When all is said and done, the Outlander does the job adequately in terms of acceleration, it’s just disappointing to know that it could likely be way faster if Mitsubishi just gave its engineers a bigger budget. 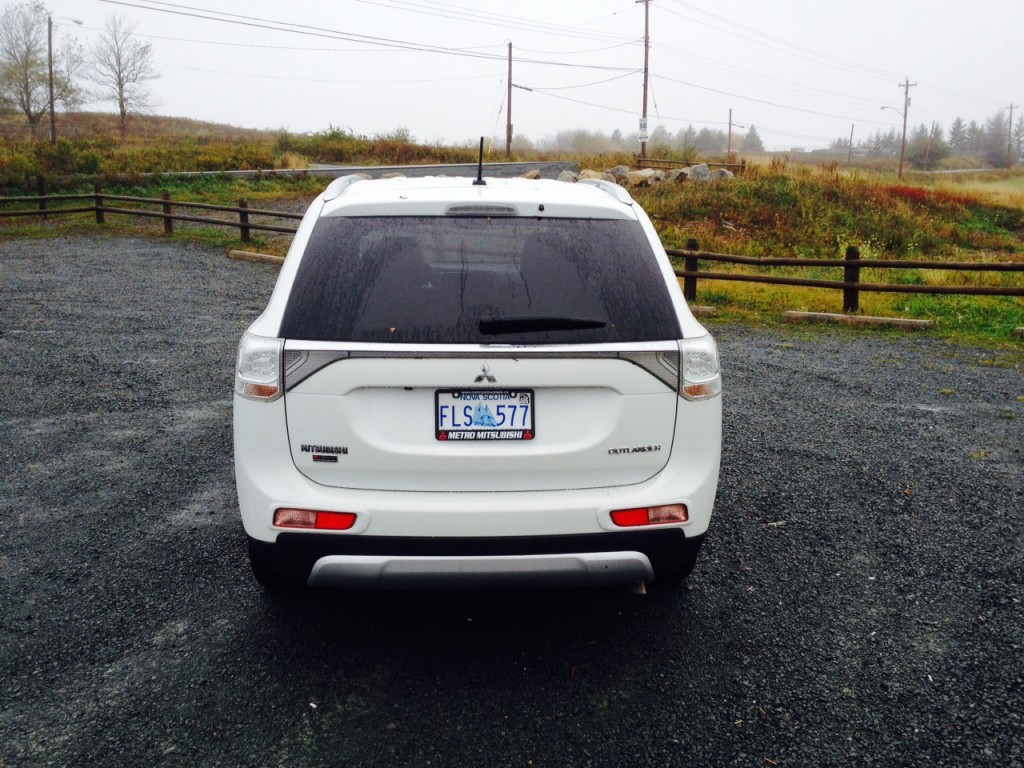 Handling is about what you’d expect from a CUV, that is to say it’s completely uninteresting, but that’s not necessarily the Outlander’s fault since most CUV’s, unless developed by Porsche, handle as if the suspension is made from marsh mellows. Where the Outlander has an advantage is its clever drive modes for the best traction and that’s where the AWC (which stands for all-wheel control) steps in. There’s partial 4WD, 4WD lock, normal and eco mode. All of this can change at your whim from the touch of a rather large button between the front seats. I had the chance to do some light off-roading with the Outlander and tried all modes. I’m convinced it will be a difficult task to get this thing stuck no matter what kind of driving you put it through. That’s something Mitsubishi has always been good at. 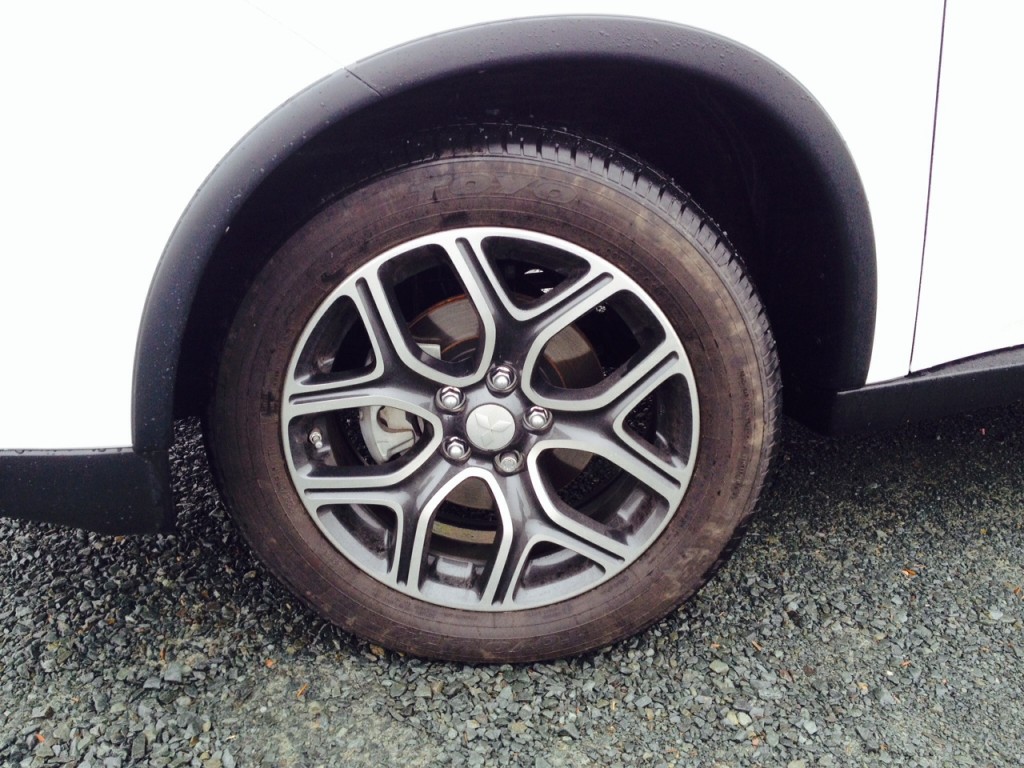 And that might be what Mitsubishi’s business plan is all about: stick to what you’re good at. That may be why it continues to offer a V6 with a regular automatic transmission with a third row seat and tail lights normally seen on a 17 year old’s modified Civic. Besides, there are still people out there that love power even if it does come at a bit of a price at the pump (the Outlander’s combined fuel consumption rating is 11.5 L/100 kms for instance). There are still people that want a third row that don’t need the excess of a minivan. And there are still people who love Mitsubishi for its quirkiness in general (myself included). 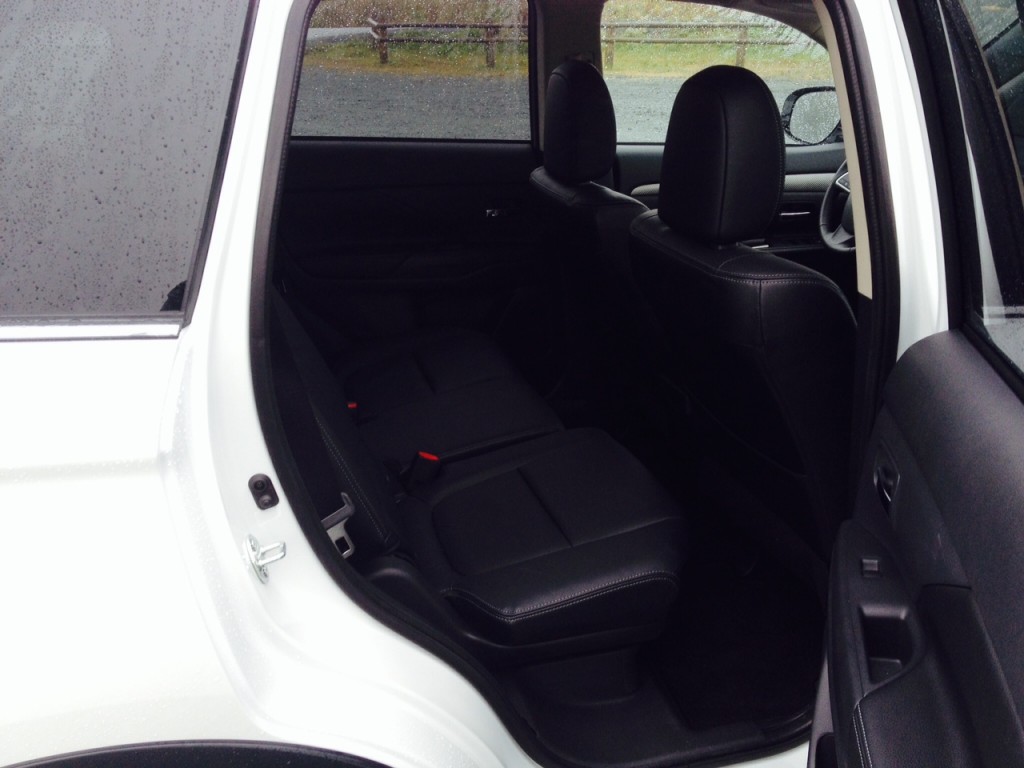 Are they being stupid or smart with this strategy? Only time will tell but if Mitsubishi can get some good engineers, interior designers and a decent budget for marketing, then they will be the clear choice for a lot of consumers. Mitsubishi’s main problem is, nobody knows just what they are capable of. 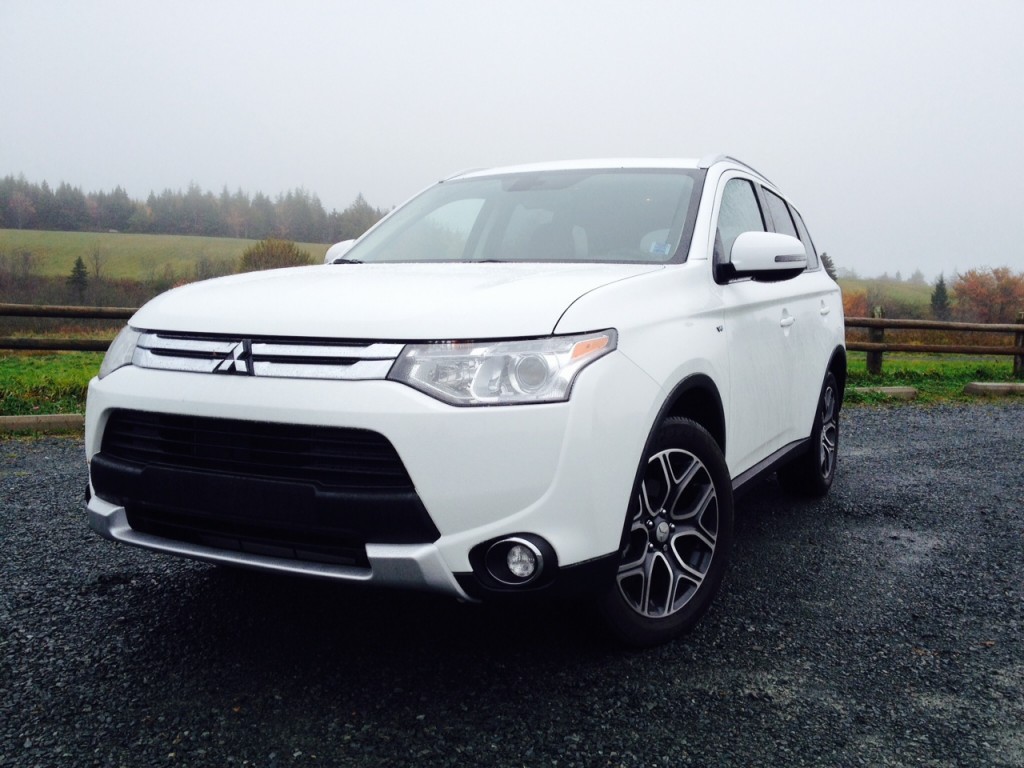