At the New York Auto Show this past week, Chevrolet introduced a newly redesigned version of their mid-size sedan which should go on sale later this year.

So, we thought it would be a good opportunity to give the current Malibu a review. After all, with the 2016 version entering the fray soon, there will surely be good deals to be had  on remaining 2015’s.

The mid-size sedan segment is still significant in our market with most of the big players offering competitive versions of the traditional family hauler. The question is, even though you will soon get some decent discounts on the current Chevy Malibu, should you actually buy one? 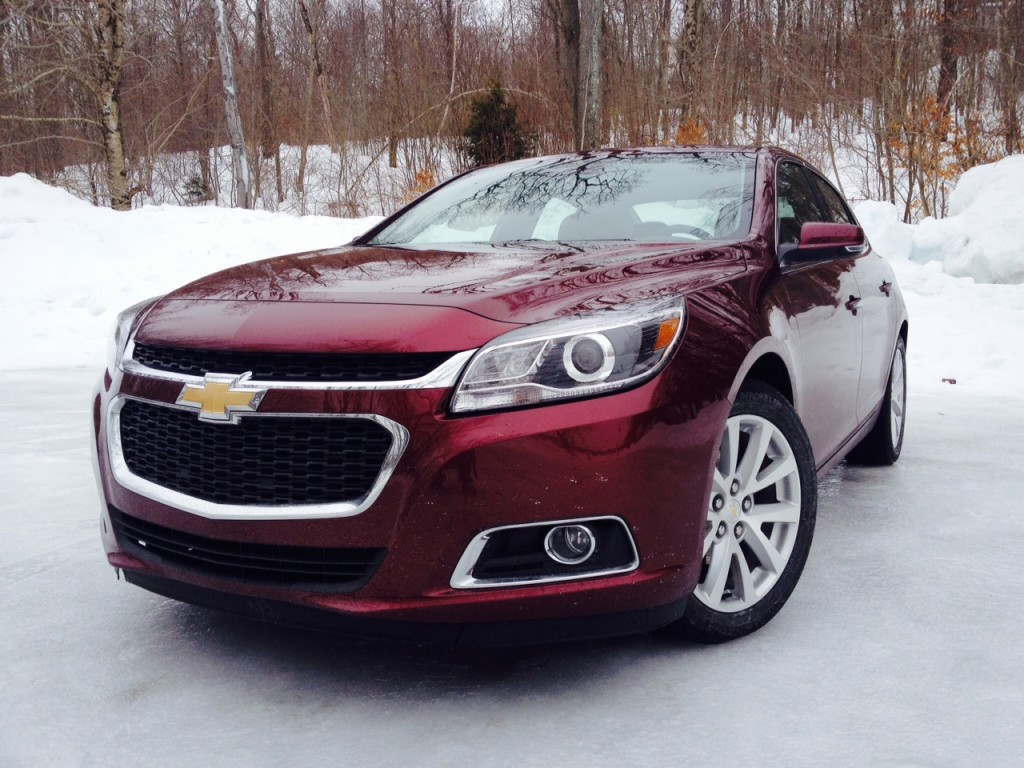 Only keen Malibu aficionados (if such people even exist) will notice the mild refresh of the front facia up front. The headlights are ever so slightly redesigned in order to house HID’s which is available on the Malibu for the first time. The front end is clean and classy, however things start to fall apart a bit when you move on to the rest of the car. Its side profile seems a bit off and I can’t quite put my finger on it. It may be the raised trunk deck lid or the uninspiring 18-inch wheels. And when you reach the rear you see bulbous square-shaped tail lights which seem to overwhelm the entire rear design. Bottom line is, the 2016 version is much more appealing to the eyes; though some have criticized the new look as being too similar to the Chrysler 200. 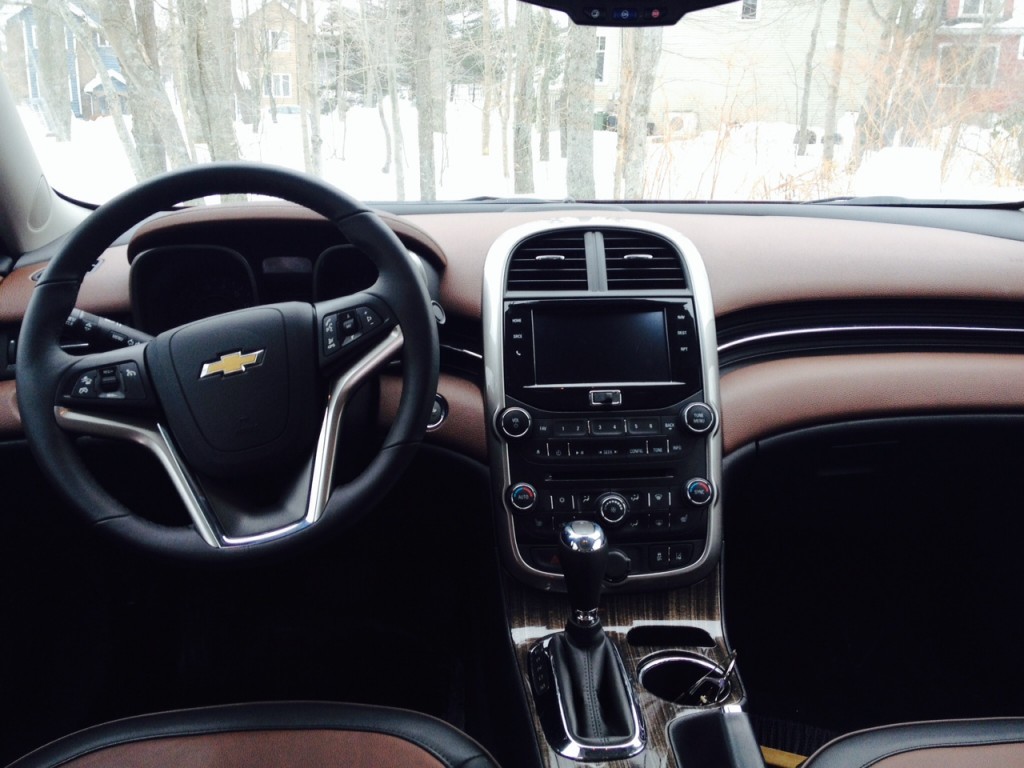 Our tester was the LTZ trim level which is the highest trim available. That means our Malibu was equipped with rather nice, cushy feeling brown and leather seats (which does not match the red exterior in my opinion). However all the controls are well laid out and everything is within easy reach. The Malibu’s party piece is the cubby hidden behind the display screen on the centre stack which rises electronically at the push of a button leaving all your passengers to think they are in a James Bond movie. It’s a smart idea, however I found when you closed the cubby hole, the screen would take a few moments to come back on. This is a bit odd considering I haven’t experienced that in other GM product equipped with the same feature. In addition, the MyLink system itself seemed hesitant from the get-do – another strange oddity that seems to only be limited to the Malibu within the GM family. Scrolling was delayed and as a result, when it finally woke up, you ended up scrolling well past where you meant to. 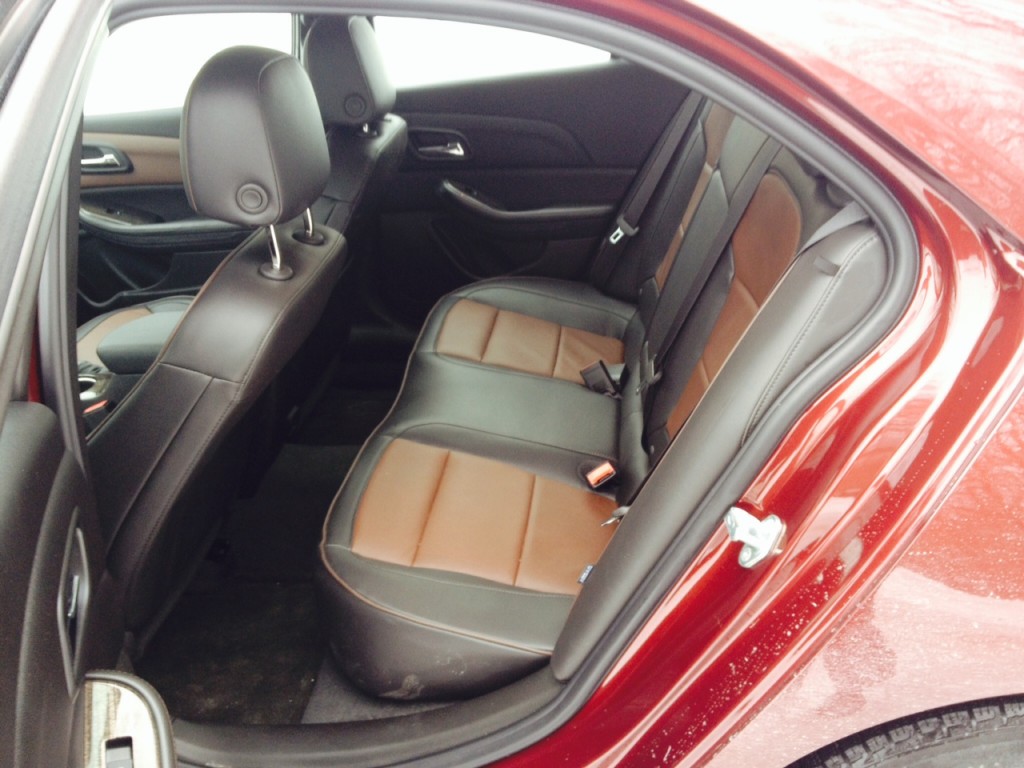 The good thing is, interior quality is good enough, however good enough isn’t quite good enough anymore especially when talking about a segment where Honda Accords and Toyota Camrys play. Their interior quality isn’t just good, it’s great. Same goes for rear seat room where the Malibu lacks in comparison. It’s not that there isn’t enough rear leg room or head room, it’s that there is more to be found within the competition. The tunnel takes up most of the room of the poor chump stuck in the middle seat. Cargo room on the other hand is plentiful, something the domestics have been consistently better at than the competition. 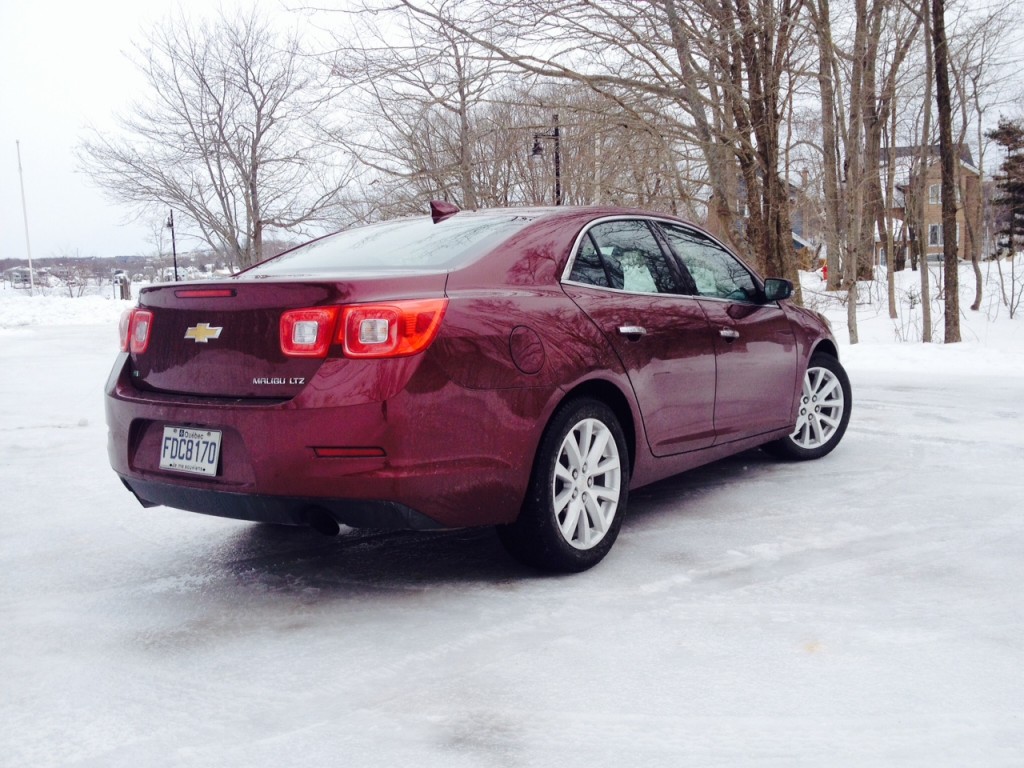 If you’re hoping for a V6, you’ll have to look elsewhere. The only units available are a 2.5 litre normally aspirated 4-cylinder and a 2.0 litre turbo. Our LTZ unfortunately came with the former which produces 196 horsepower and 191 pounds feet of torque. The end result is an underwhelming driving experience that leaves you wanting for more power. This mill seems to run out of breath at higher RPM’s and the transmission seems a bit uninterested in being a transmission at all. Now, the 2.0 turbo would likely remedy this issue and it can be had in LTZ trim, but you can also get it in the mid-level LT trim. 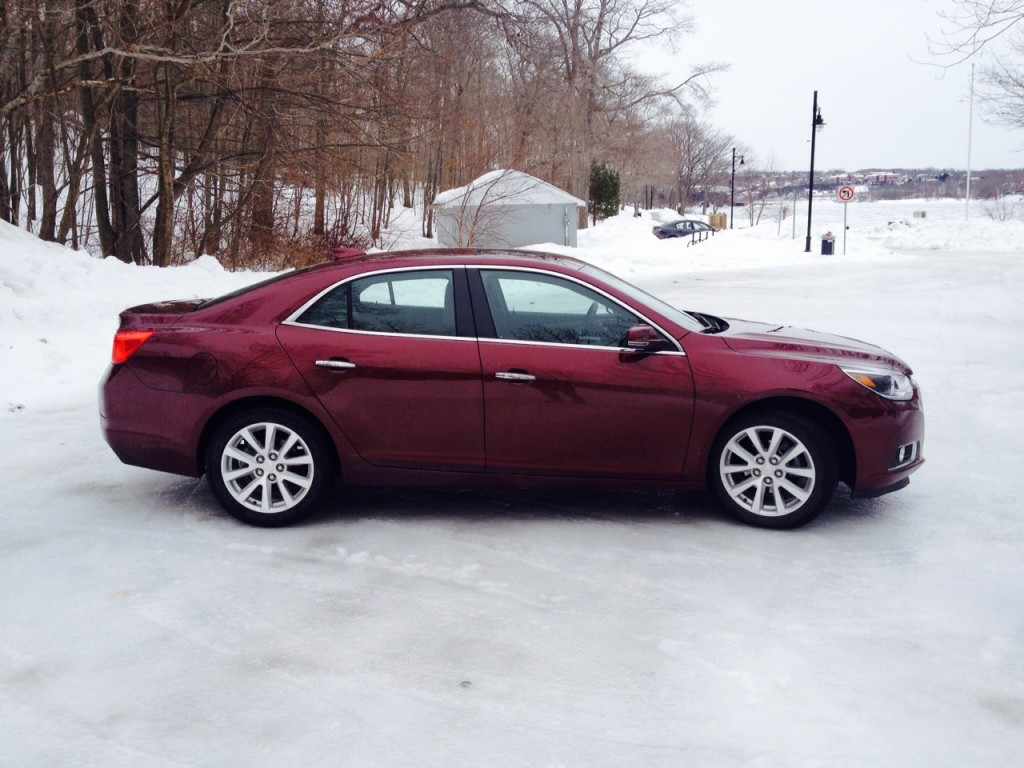 The Malibu also came equipped with an automatic start-stop system. The engine will automatically shut itself off when stopped at a stop light, for instance. It then restarts itself back up “as soon as you take your foot off the brake”. I put that in quotes because that’s what’s supposed to happen. In some instances it would hesitate to turn itself back on. This may have been caused by colder temperatures, in fairness. The idea itself isn’t a bad one, but we hope GM addresses this issue for 2016. 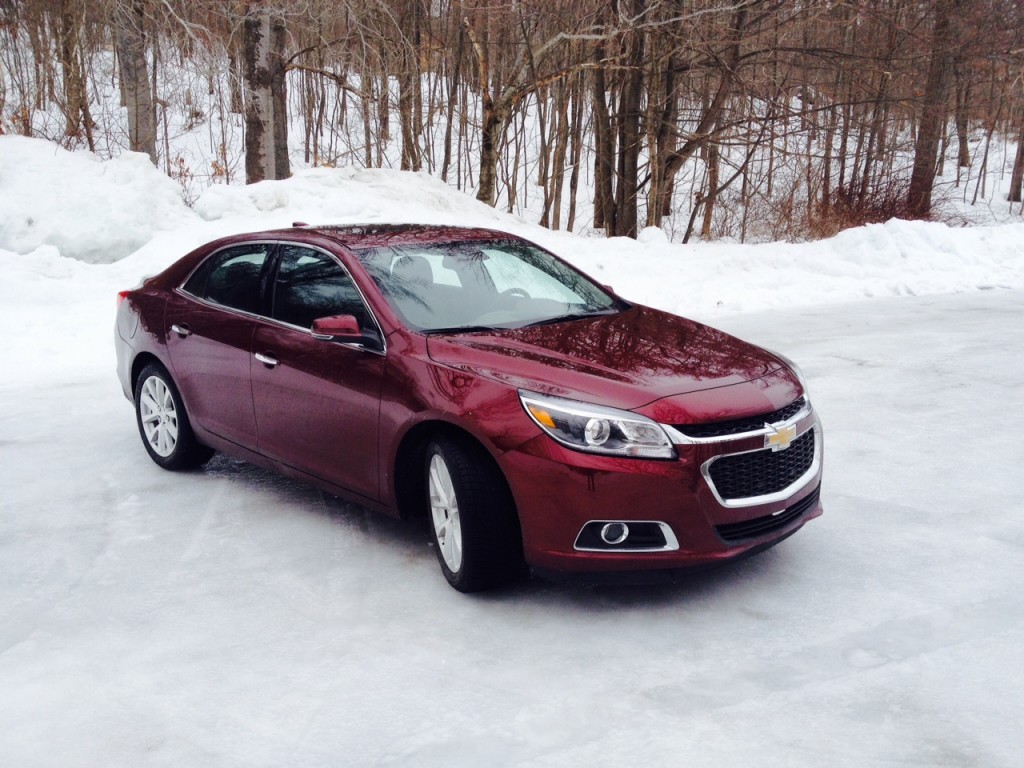 The Malibu’s ride is somewhere in between luxurious and being too stiff. In this segment, you need to commit to one or the other and the Malibu seems unsure as to which is its forte. You definitely feel certain bumps in the road but the comfortable seats and laid-back handling abilities suggests it wants you to be more comfortable than taking a corner with confidence. 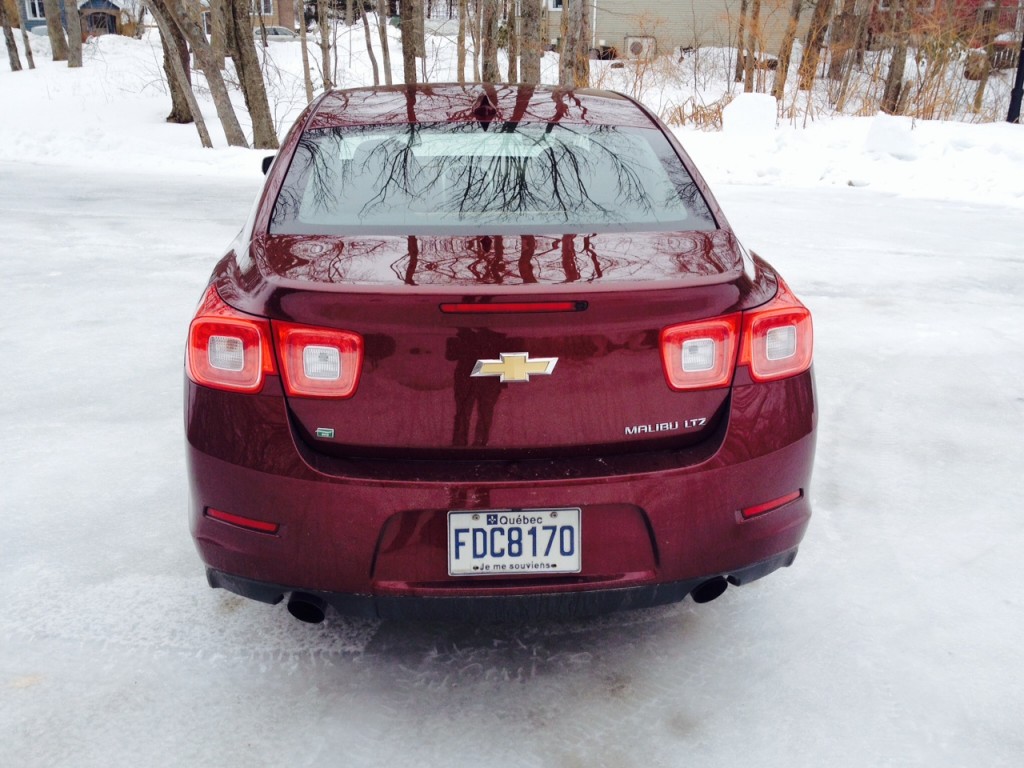 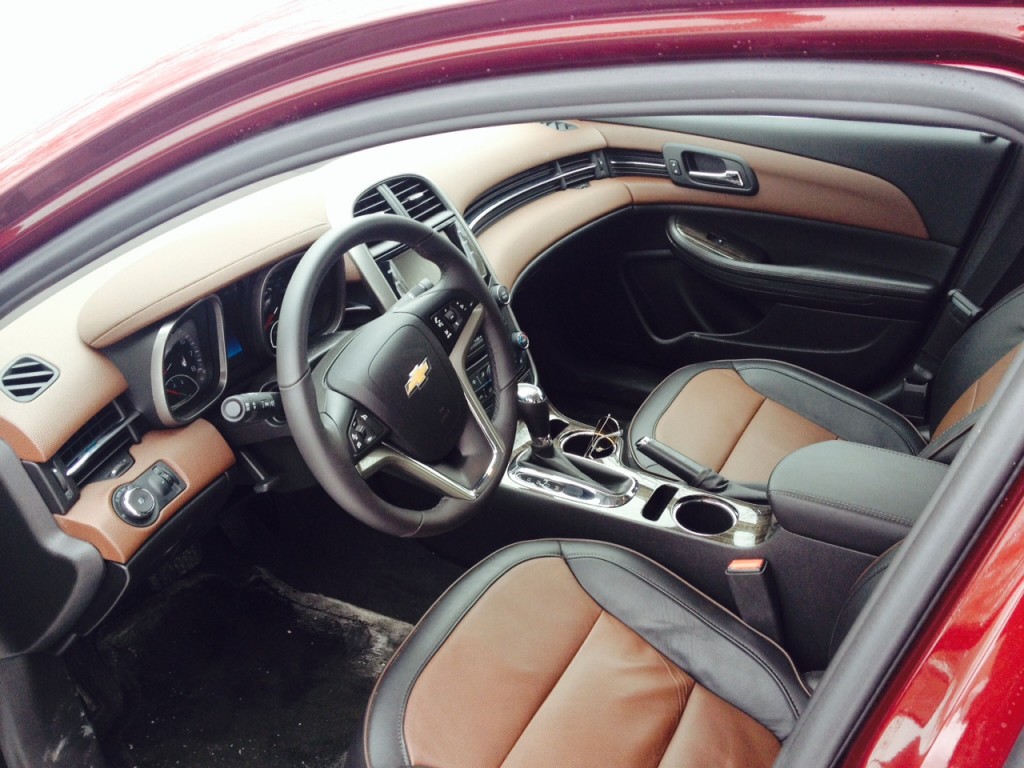 And that’s really the Malibu’s main issue: it isn’t bad. But at $35K, it should be better because, well, its main competitors are better. But what about those hefty discounts before the 2016’s come in? Well, if you could get this car for $30K and the 2.0 litre turbo then that may very well be a different story. As always, the decision to buy a heavily discounted last year model or wait for the new one which will surely be better is a tough one. That decision is ultimately up to you, dear reader. Ultimately the 2015 Malibu is a bit like regular chips. If there were only regular chips available at a party you’d gladly help yourself and enjoy them. But if there were other more interesting flavours available, you’d likely walk past the bowl of regular chips altogether. 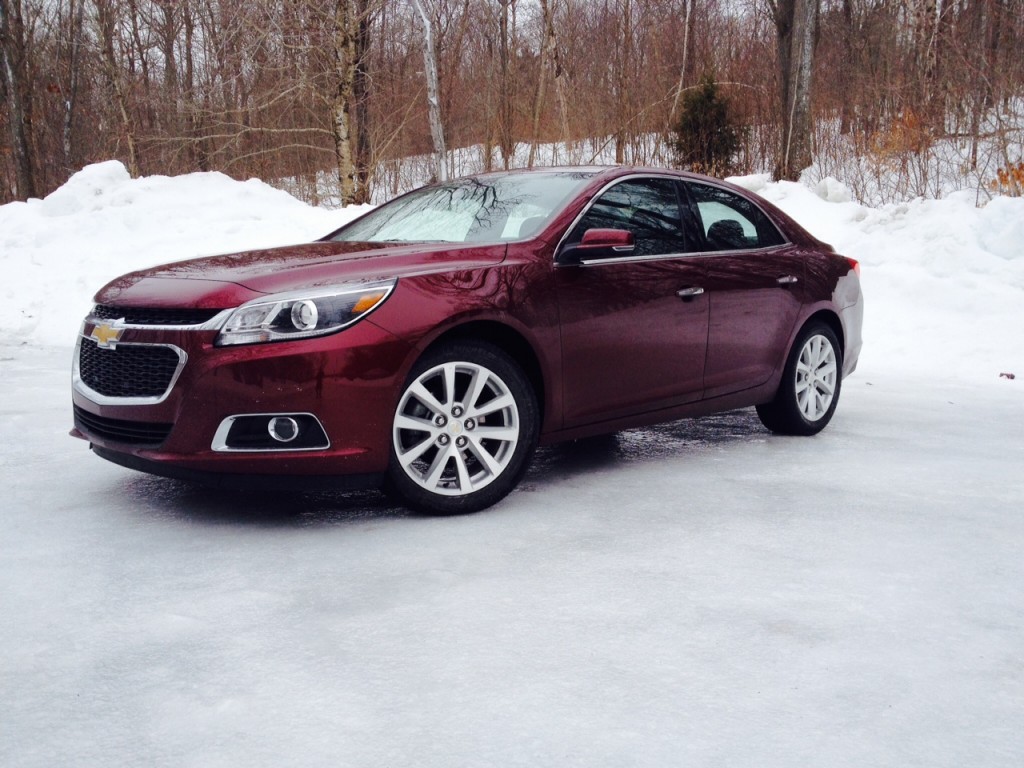