I’ve been writing a lot lately about how the minivan segment seems to have fallen victim to crossovers and SUVs. I wrote about it during my review of the Pacifica Hybrid, and I also wrote a lot about it during my review of the Chevrolet Traverse. Basically, there are cases to be made for both vehicle types, but I am vehemently opposed to SUVs taking any sort of podium finish when it comes to hauling people. Despite the President of the United States claiming otherwise, facts are to be respected. And the fact is, there is generally more usable interior room in a Chrysler Pacifica than there is in a Chevrolet Traverse.

But that’s not to say the Traverse is a terrible alternative either, in fact the new one is quite good. Big SUVs may work for some, I just doubt they work for all. If you need to haul lots of people, it’s simple. Bite the bullet and get a minivan.

But then again, damn you Mazda for making me second guess my strong support of minivans by making CX-9.

It is the largest crossover the brand currently makes and it is, with its three row seating, an alternative to the minivan.

And while I thought the folks at FCA did a phenomenal job on the exterior styling of the Pacifica, there is no way any minivan will be able to look as pretty as the CX-9. It is, like most modern day Mazdas, gorgeous. My tester in GT trim adds LED daytime running lights and rather good looking 19-inch wheels which really added to the long pointed bonnet and overall sleek side profile. The big grille actually works (usually I find massive grilles to be a bit ghastly) and there really is no angle where this thing looks amiss. A lot of people buy SUVs over minivans simply because they look more agreeable and the CX-9 is certainly exhibit A.

Exhibit B could certainly be the interior. It’s stylish and premium looking. It feels premium too. If you opt for the top of the line Signature model, you’ll get beautiful hand crafted rosewood inlays which makes it look and feel even more opulent.

The infotainment screen can be used as a touch screen when stationary, but once you get moving you need to operate it through a dial on located between the two seats. Manufacturers like BMW and Audi have been using this method for quite some time, and while it’s easier to access than stretching your arm out to the dash, I found operating the infotainment system was a bit more complicated than necessary. For instance, simply changing the radio station is a three-step process. You have to turn the dial to awaken it, then move to the channel list then scroll through to the channel you want, then hit enter. A simply button would have gotten rid of a lot of these steps and less of the driver’s attention which should obviously be focused on driving. On top of all that, the infotainment system didn’t always respond to commands on the first try.

The best seat in the proverbial house is the driver’s seat, which I will get to in a moment, but the second row of seating certainly holds its own too. Passengers will get their own climate change controls along with, sunshades on the side windows, and a USB porthole.

Third row passengers will likely wish that you had sprung for a minivan instead. Due to the sloping roofline, headroom is at a premium and leg room is much of the same. You also don’t get any neat goodies like the first and second row passengers. Just a cup holder for you. Access to the third row isn’t as easy as it is in a minivan either. It’s clear that the third rows are for children, not adults. Though it should be noted that this issue isn’t limited to just the CX-9. Most, if not all, large crossovers that claim they can hold as many passengers as a minivan have this same issue.

You’ll get more cargo space in a minivan too, but cargo room isn’t necessarily lacking with 407 L of space with all seats up and just under 1,100 L with all seats down. 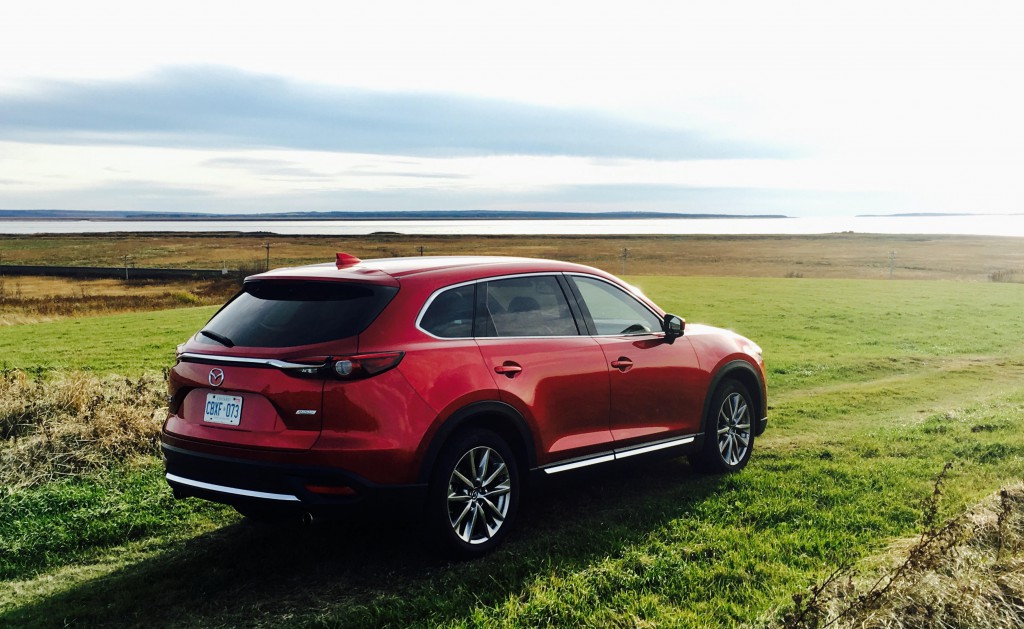 There’s only one engine to choose from and the amount of power that comes from the 2.5 litre SkyActiv turbocharged four-cylinder largely depends on what grade of fuel you choose to purchase. If you use regular fuel, power output will land at 227 horsepower and 310 pound foot of toque. If you pony up more cash for supreme gas, those horses will jump up to 250. A six-speed automatic is the only transmission available.

This is a very interesting engine, not least of which is due the sound it emits, which sounds nothing like a four cylinder. It does a decent impression of a five, or even six cylinder engine. But regardless of the type of octane pumping through, the CX-9 has great pull thanks to best in class torque. If you want to waken the CX-9 up more without spending a premium for supreme gas, there is a sport button which opens up the throttle a little bit more. There’s plenty of passing power with a host of safety tech to ensure painful calls to your insurance company don’t occur including adaptive cruise control, blind spot monitoring, lane keep assist and warning, a lovely head up display, wide-angle rearview camera (though trajectory lines are a blatant omissions), rear-cross traffic alert and more. I am pleased to report that these functions worked well for the most part, even if icy conditions.

Perhaps one of the biggest advantages the CX-9 has over the minivan, and indeed over its direct competition, is a compliant suspension set up. It is tuned decently enough so that you aren’t bouncing over bumps and potholes, but it doesn’t feel too firm either. In fact, on the highway and around town, the CX-9 feels as if it’s been set up for luxury but if you approach a bend and feel as if you’d like to open it up, it will happily obey. Despite its overall mass, it will still hug the corners with relative ease and minimal body roll. It’s no MX-5, but I’d wager to say it’s the top corner carver in the segment.

Official fuel consumption figures come in at 11.5 L/100 kms city and 8.9 highway. Those numbers are fairly impressive in and of themselves for a large crossover but during my two weeks with the CX-9, in mixed highway/city driving conditions I was able to return 10.7 L/100 kms. If you opt to use regular gas and take a slight power loss, then that means you won’t be spending a terribly large amount of fuel, though it does have a fairly large gas tank so those savings may not seem as obvious at the pumps.

But in general I like, and have always liked, the CX-9. If I was in a position of wanting something fun to drive with the need to haul more than four other humans every once in a while, then the CX-9 would seem to be the obvious choice. However, if you are the type that needs to haul humans and stuff more often than not, I’m sorry to say the minivan makes more sense. You’ll have to put your performance preferences to the back burner.

Really what’s needed is a performance oriented minivan. And if any manufacturer is able to pull that one off, it’ll be Mazda.