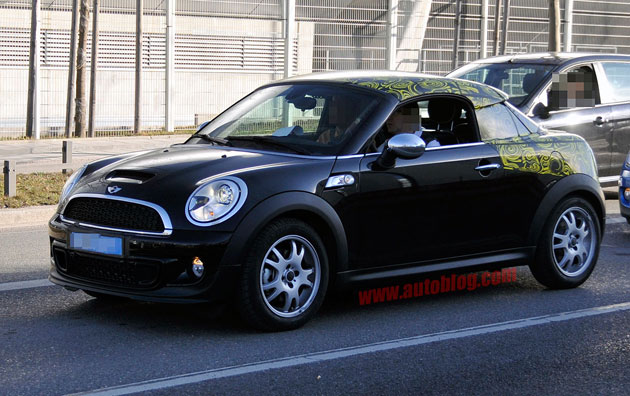 About a month ago the Mini Cooper Roadster was caught out and a bout and now its hard topped brother has been caught doing this same. This can only mean that we are ever closer to seeing a production version of the two concepts, which were technically close to production ready in the first place. Autoblog’s stealth photog was able to snap this shot that confirms the production version won’t stray far from the concept.

The rumoured engine for the coupe is the same 1.6 litre turbo four cylinder that can be found under the hood of the current John Cooper Works Edition Mini Cooper, meaning it produces 211 horsepower and 192 pound feet of torque. The rumour also indicated that the roadster’s engine would be tamed somewhat to 175 horses and 177 pound foot torque. Given that the current Cooper S generates 181 horsepower, I’d wager that’s no longer true.

The coupe will also get, according to the photos, a retractable spoiler which is great for when it’s not needed i.e it’s a functional spoiler unlike 90% of spoilers out there today.

The coupe and roadster are expected to be revealed quite soon with the coupe going into production this fall ahead of the roadster.