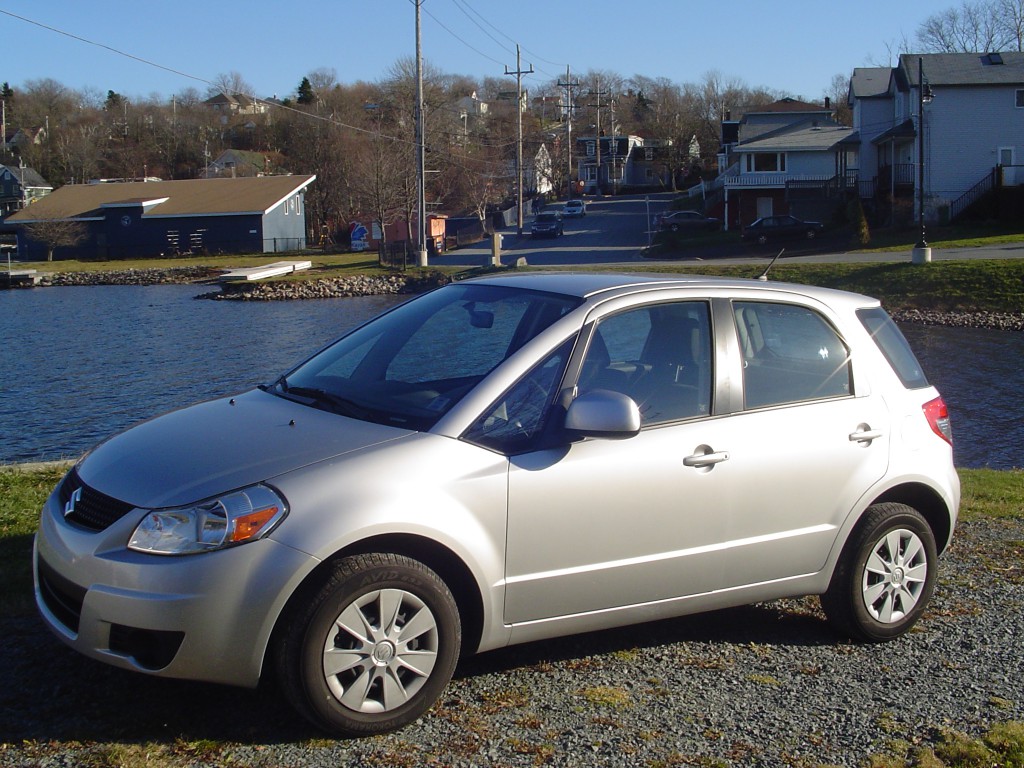 I have a vivid memory of sticking up for an unpopular kid back in grade three. His name was Shawn. He was fairly awkward, had a strange sounding voice and looked pretty much like Linus from Charlie Brown. We were relegated to being partners for  a project about dinosaurs.  For our brainstorming session we were allowed to go out into the hallway and sit amongst the coat racks. This was a pretty sweet deal because you could hide between the coats and play fort, which was pretty much the best thing ever if you were a nine year old boy. Hell, it’s still a pretty sweet game today as an adult.

But amongst our fort building, a couple grade six boys were walking down the hallway and saw Shawn. They decided his striped sweater wasn’t quite up to their fashion standards so naturally they made fun of him. When Shawn didn’t respond, they started to push him. That’s when Shawn said “don’t push me” and his awkward voice was then ammunition for the grade six bullies. It was then I decided to stand up for Shawn.

I came out from behind the coat rack and told them to leave him alone, he could wear whatever he wants.

My social status at that point was neither popular nor unpopular. But that day, I certainly became popular with the unpopular kids because shockingly enough, the bullies then left Shawn alone after I stood up to them.

Suzuki is definitely the unpopular kid in the proverbial car playground. Their product always fly under most peoples radar and they’ve been struggling in North America for quite some time as a result. I’ve always sort of liked Suzukis – that is – the real Suzukis, not the fake GM rebadged ones. So I was actually a bit excited when I found out I would be getting an opportunity to drive one. I knew I’d likely write a review for this blog and I knew I’d likely get to stick up for the underdog again.

Or so I thought.

The first thing you notice about the SX4 is that it’s quite an awkward looking thing. It’s short, shorter than a Honda Fit and us taller than the Fit, it almost has the ride height of a CUV. Japanese style clear lights for both the turn signals and reverse lights are typical Suzuki out back. The front facia is actually quite decent looking, if a bit dated now. All these mismatched shapes means we’re left with a bit of an awkward mess here, Suzuki. 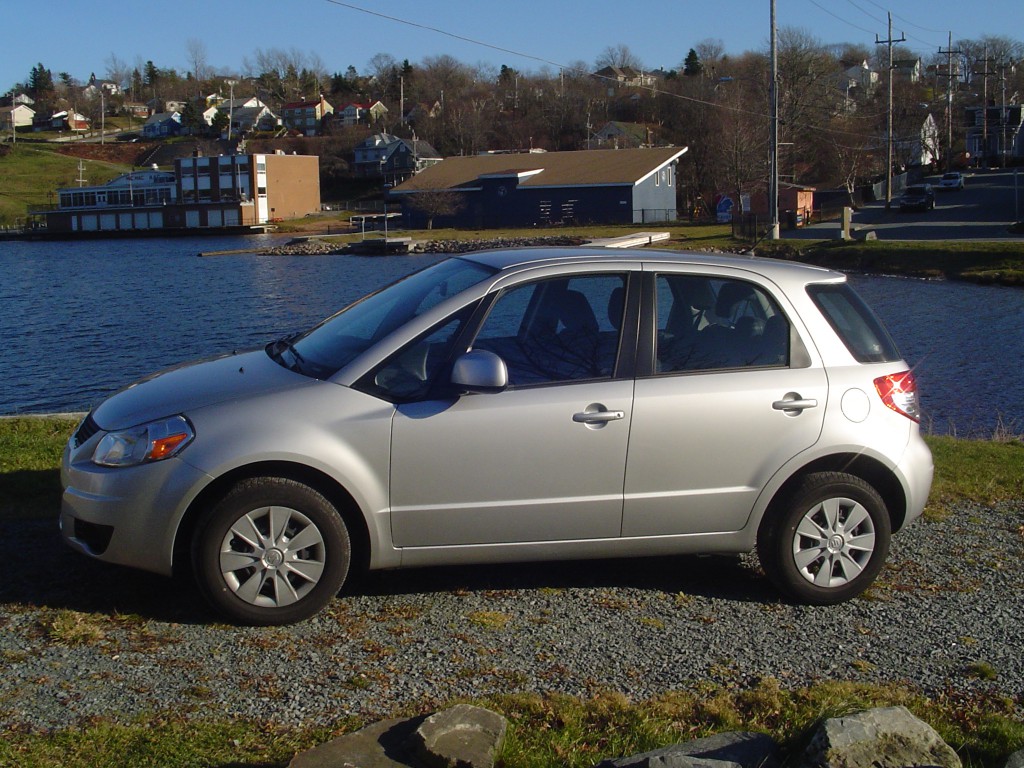 Inside there is less cargo space than a Honda Fit with only 203 litres available. The Fit allows for 585 litres of space. However what the Fit doesn’t have is storage space beneath the cargo floor. This is quite nifty for storing valuables in case someone breaks into the car, they likely won’t look under the cargo floor. Although they won’t see anything to steal in the first place since the SX4 comes with a standard privacy cover. 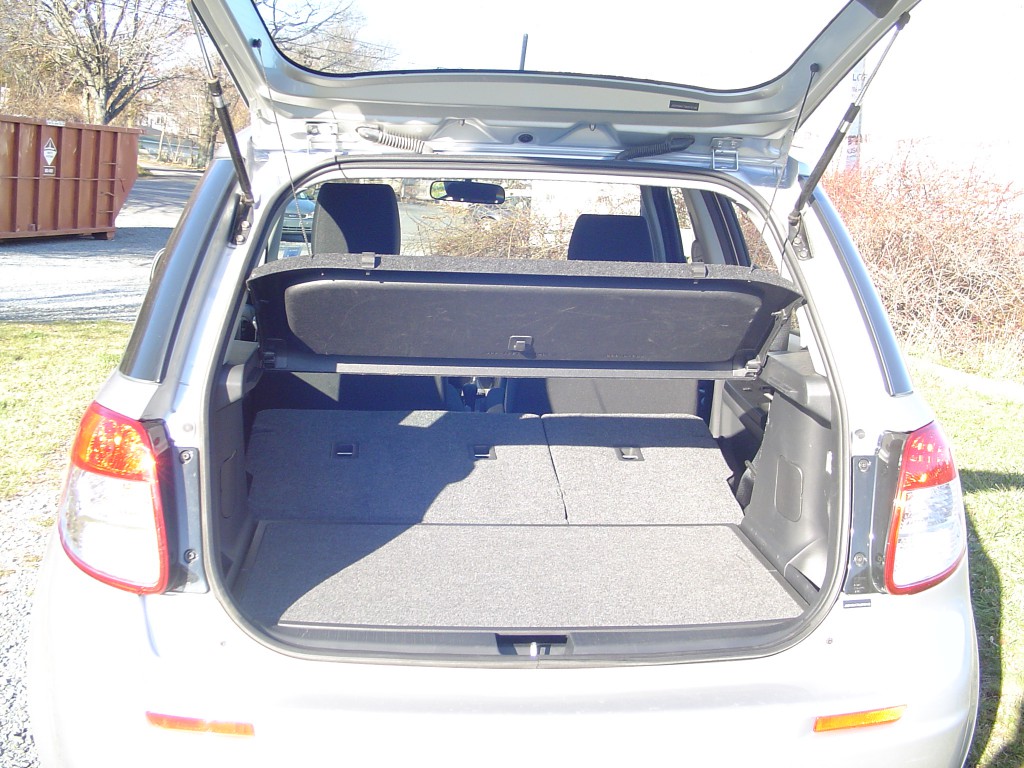 The interior is also decent with good ergonomics, decent materials and decent metallic accents. I’m using the word ‘decent’ a lot because it’s not bad at all, but not exactly class leading either. The whole feel can only be described as adequate. The SX4’s interior is easily outdone by the Fit, however it is better than the Chevy Aveo or even the Toyota Yaris. 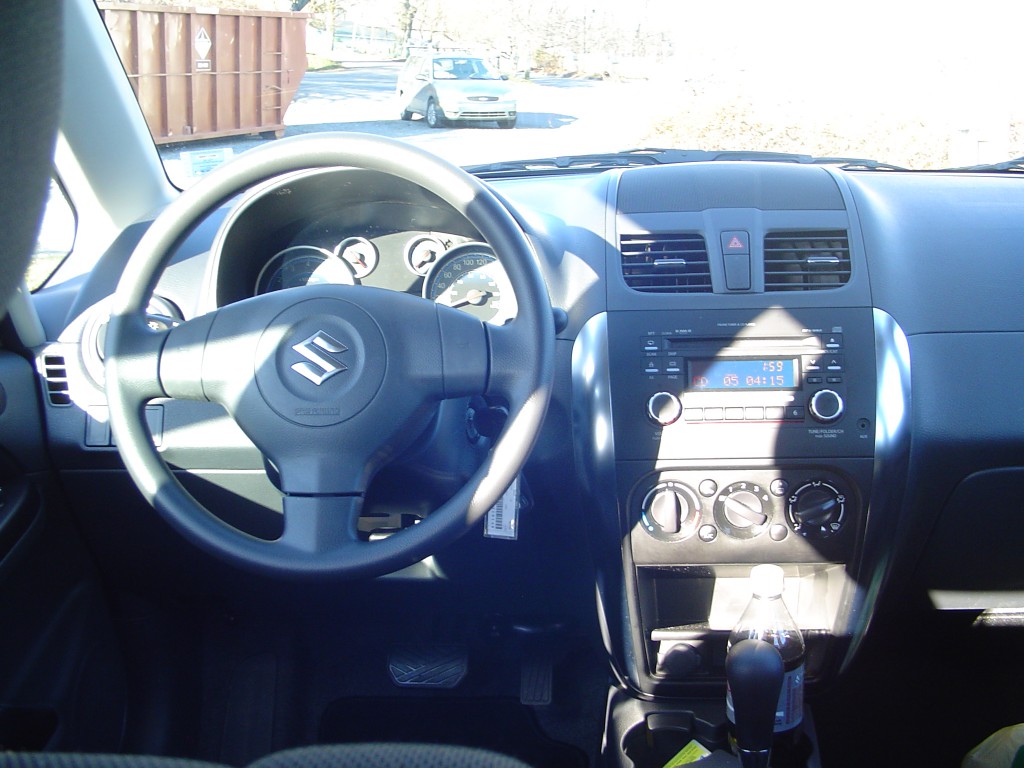 The stereo system, however, is bad. Really bad. Even with the bass turned all the way down there is still buzzing in the speaker system. Not to mention the sound quality is terrible no matter how much you fiddle with the levels. 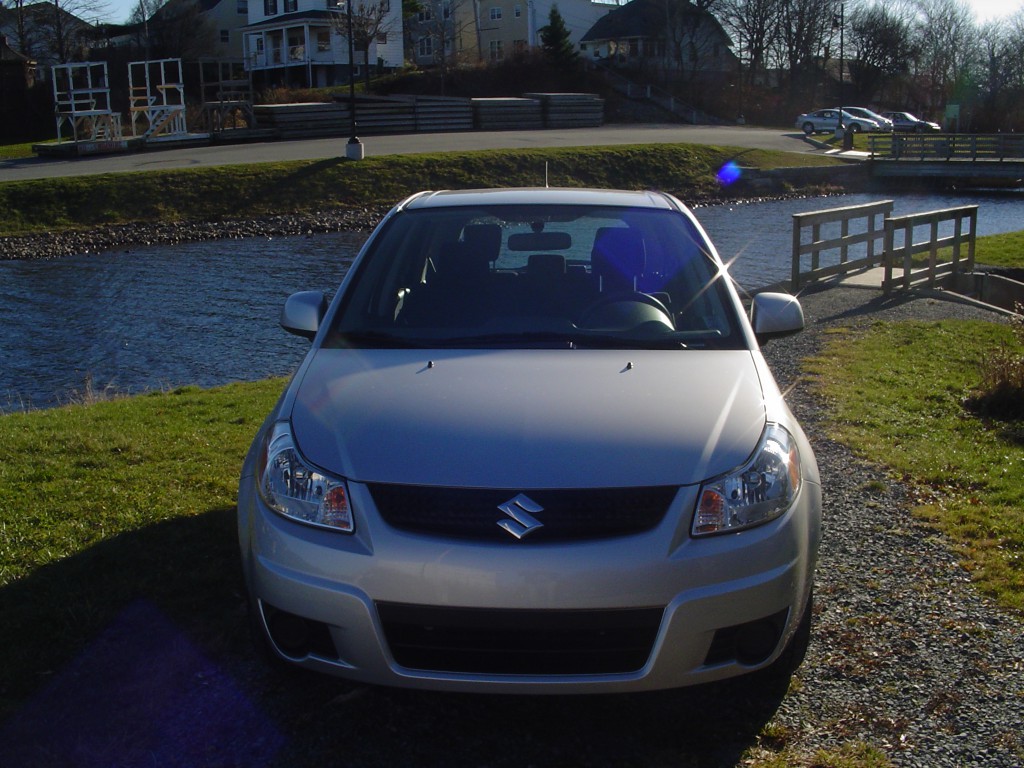 It doesn’t get much better with the seating. No matter how hard you try, you always feel as if your sitting on top the car and not in the car. You can’t lower the driver’s seat. And they are quite made for long trips either as taking it on a 4 hour drive to Yarmouth, Nova Scotia proved to be more uncomfortable than James Franco declaring that rabbits turn him on. And the arm rest is way to skinny to be useful and it gets in the way when you try to put on your seat belt. 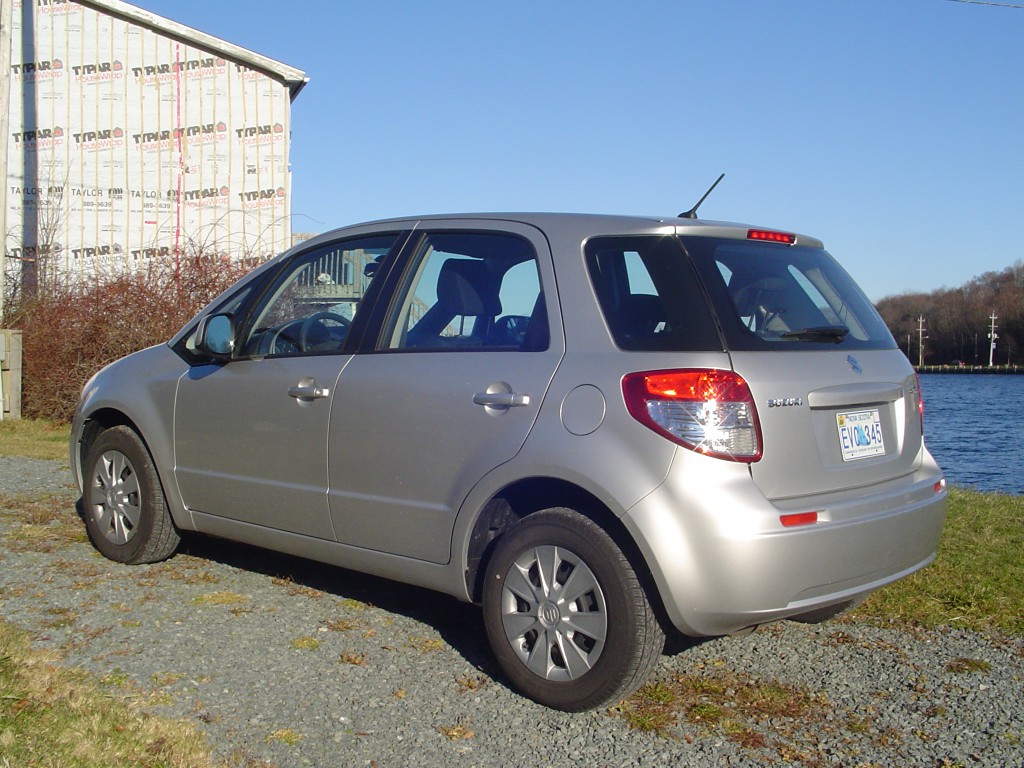 And don’t even try to put a human being in the back seat. It’s a tight squeeze with the driver’s seat at a normal position.

The SX4 has a class leading 150 horses derived from a 2.0 litre 4 cylinder which isn’t the most refined engine in the world. Shifts are all over the map. When taking off from a stand still the engine seems to want to hold it in first gear just before it explodes before shifting to second. Using the manual shift mode helps ease the jerkiness and apparently schizophrenia of the gear shifts. One interesting thing to note is Suzuki set up its manual shift mode in the same way BMW does where upshifting is done by pulling the gear shift down and down shifting is done by pushing the gear shift up. Some call this backwards, but I find it quite natural so kudos to Suzuki for that. 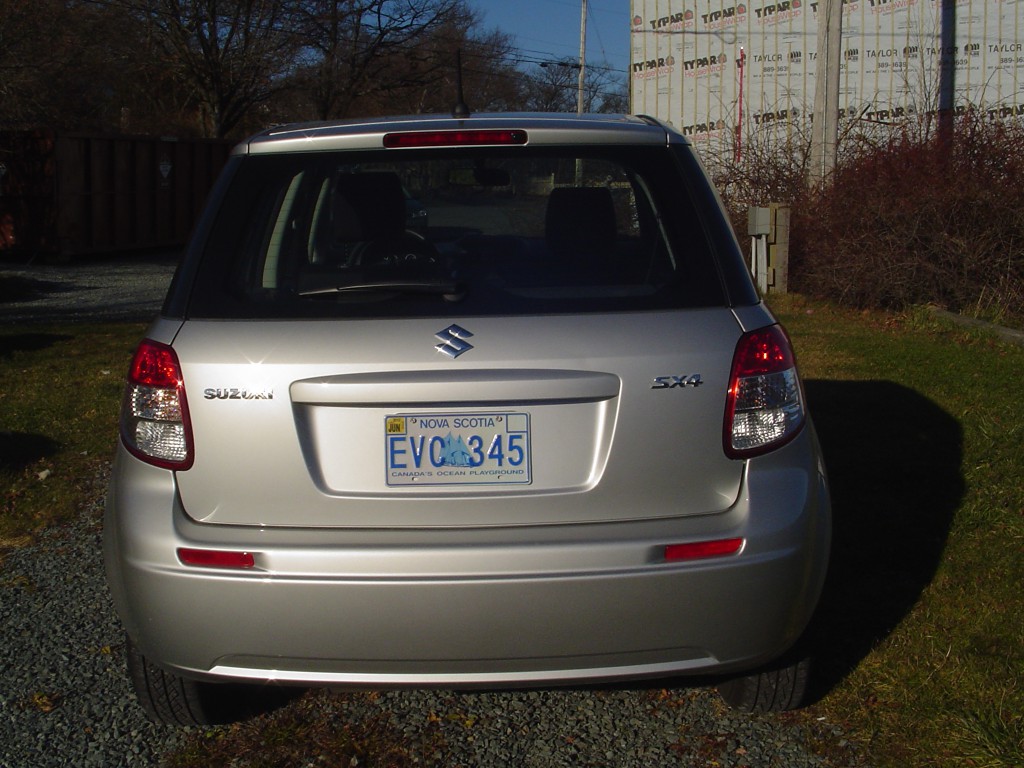 I was able to achieve decent fuel efficiency. I was able to drive from Halifax to Yarmouth with just under three quarters of a tank. If you don’t know, that’s a 4 hour drive. It made it just barely though as the gas light finally came on right when we arrived in Yarmouth. 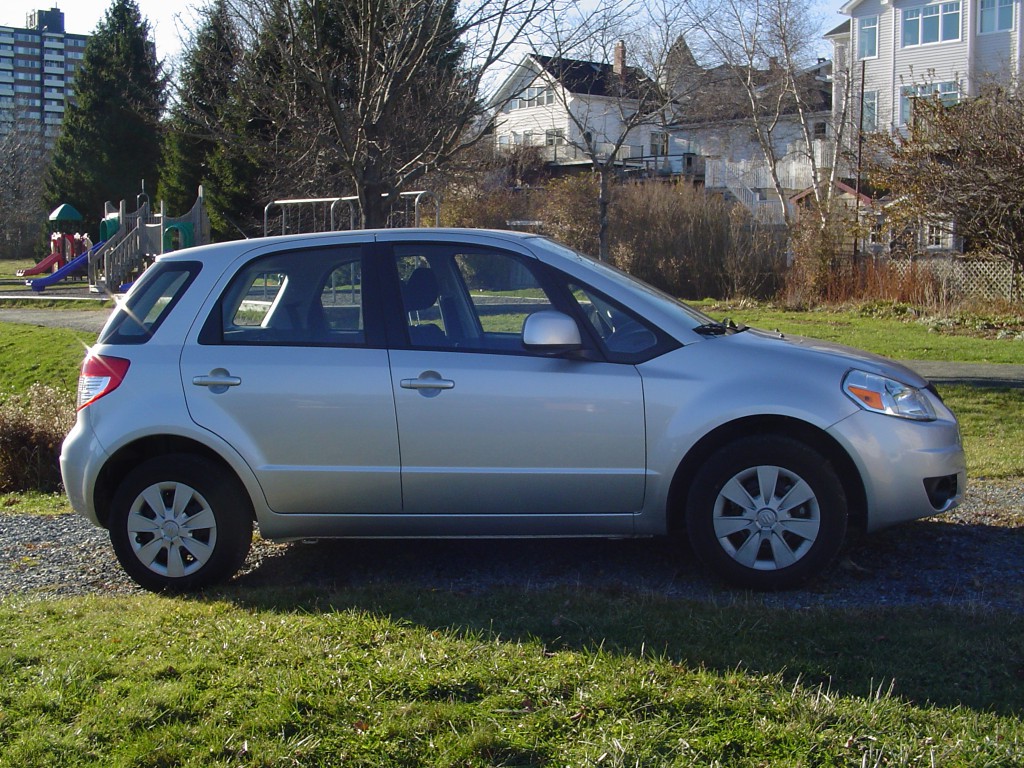 Since the SX4 has a high ride height, handling isn’t its forte either, but again, it does the job adequately. There’s some body roll but not so much that you feel as though you will lose control. Because the SX4 is so small, it is actually nimble around the city. It’s very easy to park and you can fit it in tighter spaces.

All in all this vehicle is very adequate for the everyday person. If fuel efficiency, and decent cargo room is your priority the SX4 is worth a look. It is also available with all-wheel drive (AWD), something its competitors don’t offer, making it the cheapest vehicle in Canada you can buy with AWD. The SX4 is really for someone who works in the city and gets them from point A to point B without much fuss in relative comfort (so long as you don’t do long distance trips) and wants a bit of exclusivity. 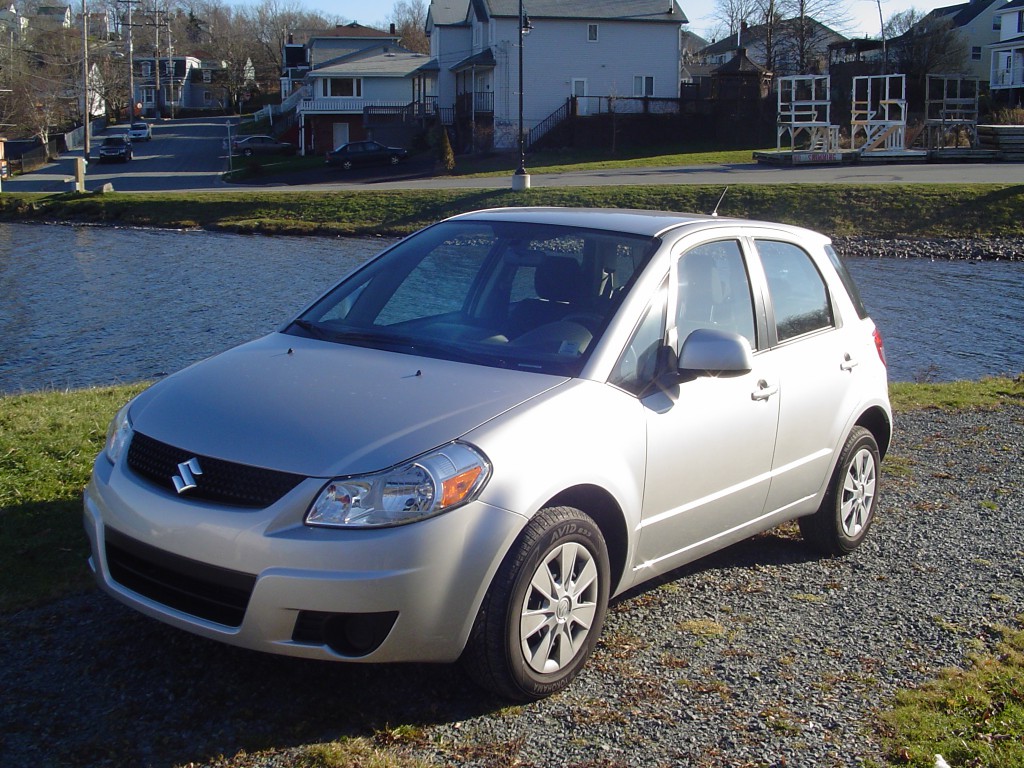 The SX4 is definitely not a popular kid in the car world, and even though it does most things adequately, it’s a bit hard stick up for it like I did for Shawn. Perhaps the upper trim level AWD version addresses some of the problems, but it really needs a complete redesign.

Maybe one day the SX4 will be the cool kid, but it’s not quite there yet.