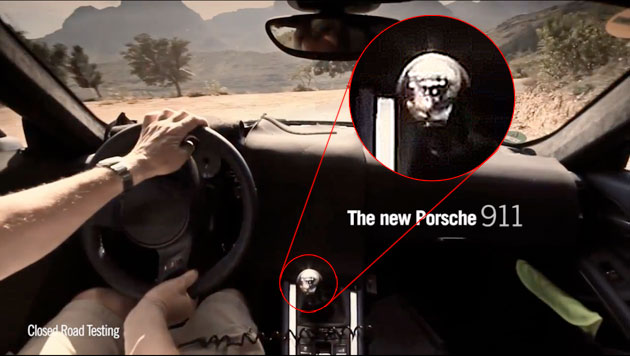 The internets were a buzz last month when rumours started to surface that Porsche was developing a seven-speed manual transmission for the iconic 911. The speculation was that the addition of a seventh gear would help out in the fuel efficiency department. Besides, automatics are now into the 8th gear realm and quite possibly beyond.

Well, now there is actually some evidence. Porsche has released a teaser video of the next gen 911 and one thing that almost went unnoticed was the gear shift during the shots of the cockpit.  It’s hard to make out, but if you look at the zoomed portion of the gear shift there’s actually an extra line going up and to the right.

In the current generation of row-the-gears-yourself 911s, the reverse gear is up and to the left. This would seem to suggest that the extra line to the right on the gear knob is indeed the rumoured seventh gear. And if it is indeed true, this could very well be the proverbial life saver that the manual transmission so desperately needs to stay alive past the next decade.