Here’s something I bet you didn’t know:

According to Toyota, the Yaris is named after Greek mythology. Within Greek mythology ‘Charis’ is known as a symbol of beauty and elegance. ‘Ya’ is German for ‘yes’ and it apparently refers to how Toyota perceived the European market’s reaction to the styling. Put them together and, ta daa! You have Yaris.

Why do you need to know this? Well firstly, as Mortal Kombat has always taught us, there is no knowledge that is not power. 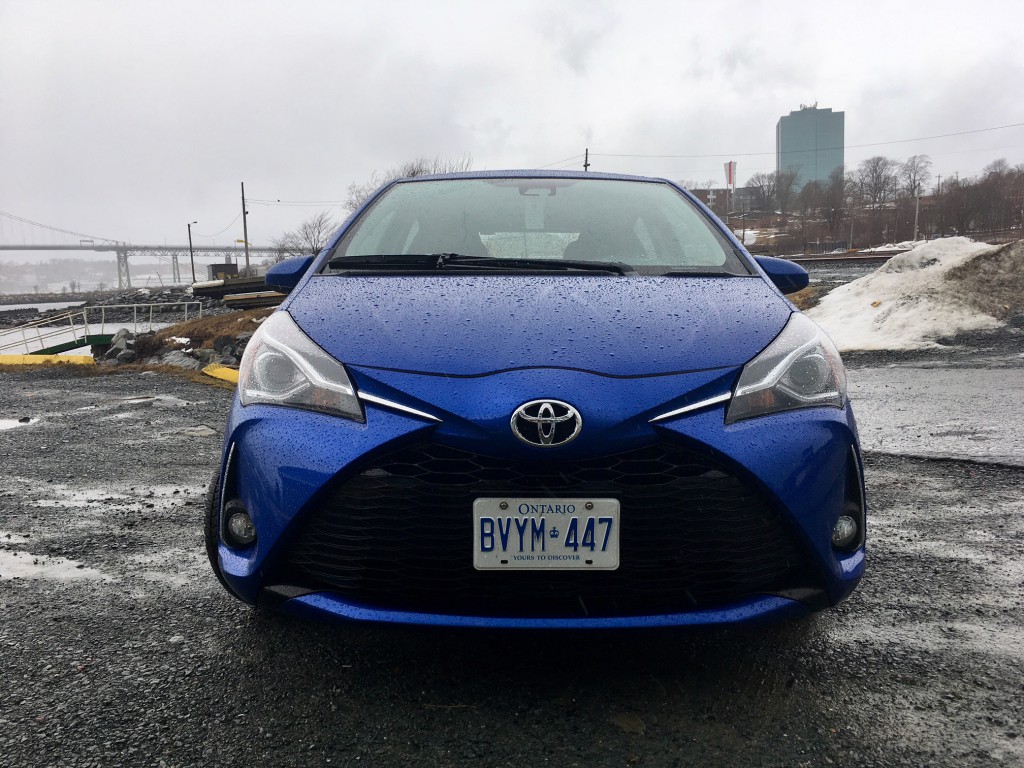 Secondly, the recently refreshed Yaris didn’t garner too many ‘yeses’ from anyone who saw it, sat in it, or was driven in it. Despite its cosmetic updates for 2018, most people reacted with yawns or not even at all. This must be frustrating for Toyota because, not only does the new Yaris barely elicit any reaction to it as its name suggests it should, but they’ve actually gone out of their way to add dramatic styling cues to their smallest model. I can think of no other vehicle in the segment with such an aggressive front fascia which now features a more prominent open-mouthed grille, a more pointed nose, and unique-looking LED daytime running lights (available on the top trim only). Decent looking 16-inch alloy wheels help to complete the look, while the reworked tail lights span further along the hatch. Honestly, to my eye, it’s not too bad looking, though it does sort of come off as trying a bit too hard. 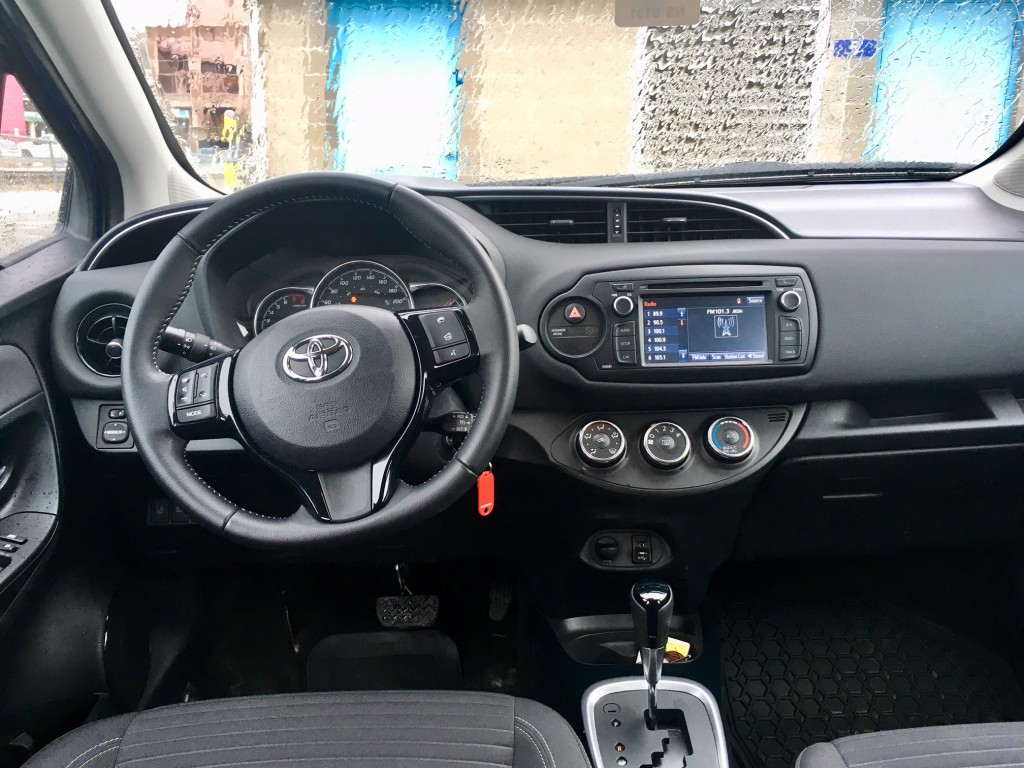 I appreciate Toyota designing a unique interior exclusive to the Yaris. All too often, manufactures make interior designs that all look the same (I’m looking at you, Volkswagen), but Toyota has chosen to give the little Yaris some character of its own with a unique steering wheel and dash set up. Being the top trim, there were a few goodies here and there but having driven the latest effort from Hyundai in the form of the new Accent the week prior, it’s clear that Toyota has some catching up to do when it comes to standard equipment, even on the top trim. 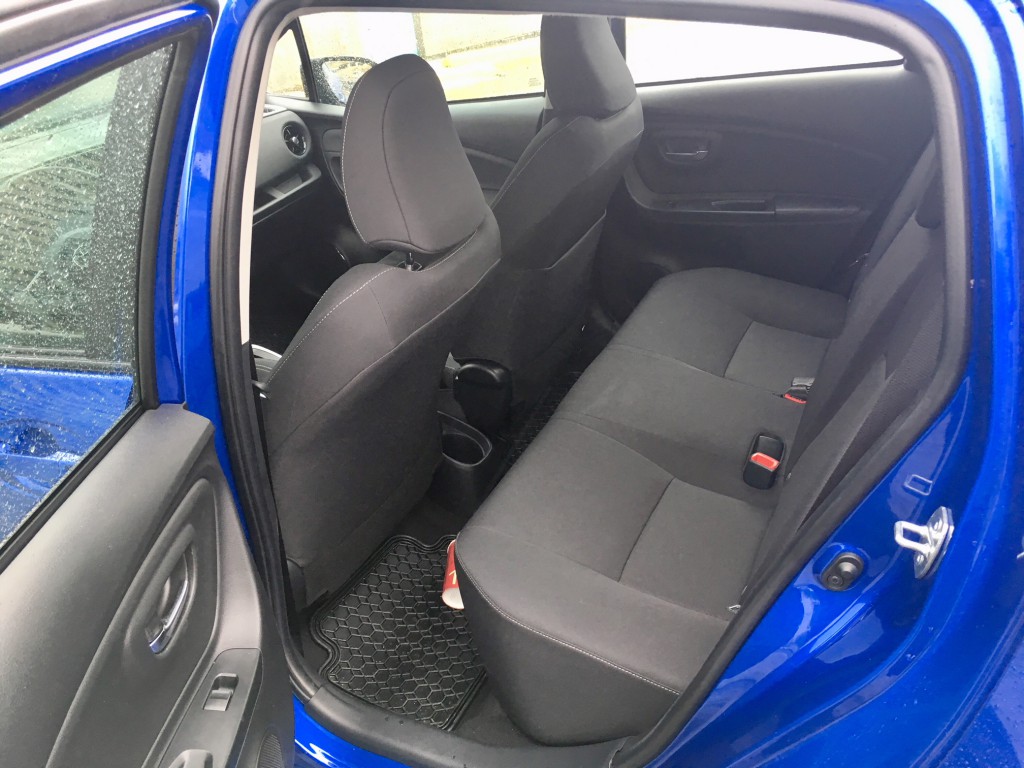 So what does the top trim get you? Well notable features are the aforementioned LED daytime running lights, projector-style halogen headlights, 16-inch wheels and sport bucket sets which are heated. Though it must be said that the button for the heated seats is difficult to access due to the placement of the hand-brake, and the design of the button is unconventional leaving you wondering if you’ve turned on the driver’s side or the passenger side seats. Toyota’s safety sense features are also on board, which is great to have in this segment. 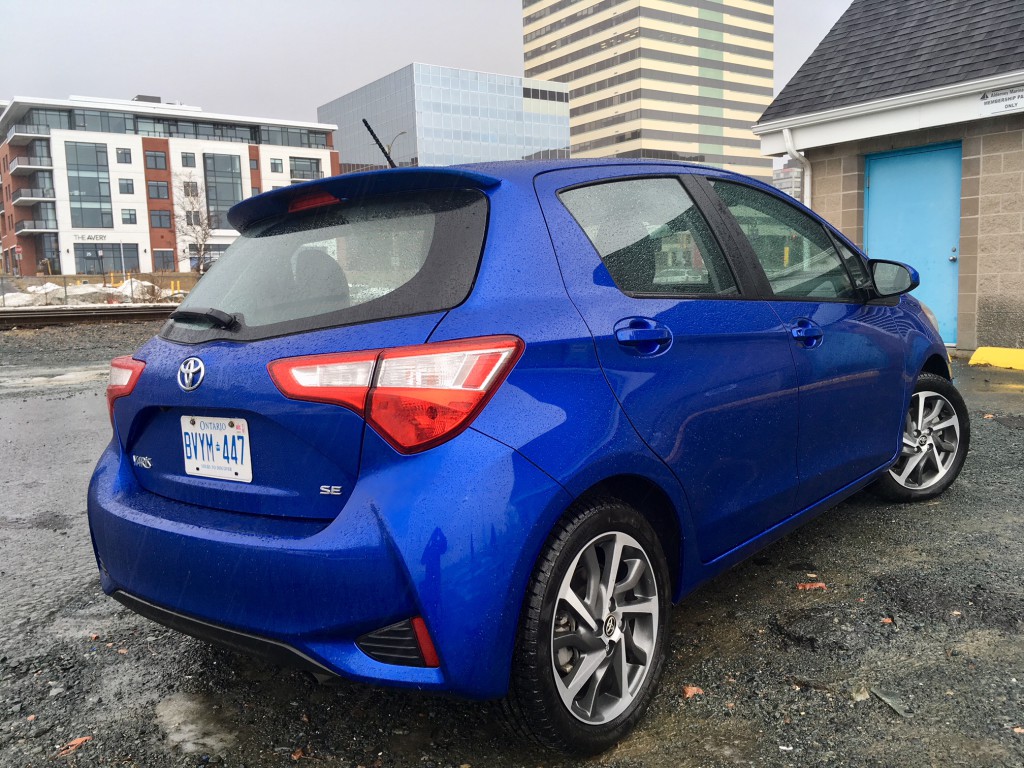 And speaking of the seats, it’s been a long time since I’ve found it so difficult to get an optimal seating position in a press car. This isn’t entirely due to the seats, which don’t offer a heck of a lot of adjustability anyway, but the steering wheel is largely to blame. It tilts, but just barely, and it does not telescope. This made the Yaris feel awkward every single time I drove it and the hour-long drive to my fiancée’s farm was frustrating and borderline unbearable on my legs and knees as a result. Thankfully a feature that you do get on the top trim is cruise control though it doesn’t confirm the specific speed you’ve set it at, you just need to go by what the speedometer is conveying. On most cars you set the cruise specifically to 113 km/h, for example, and can change it to speed up or slow down incrementally with accuracy. With the Yaris you have to guess when increasing or decreasing which speed you’re setting the cruise control at. There is a trip computer but it looks and operates as if it’s come from a late 90’s model vehicle. 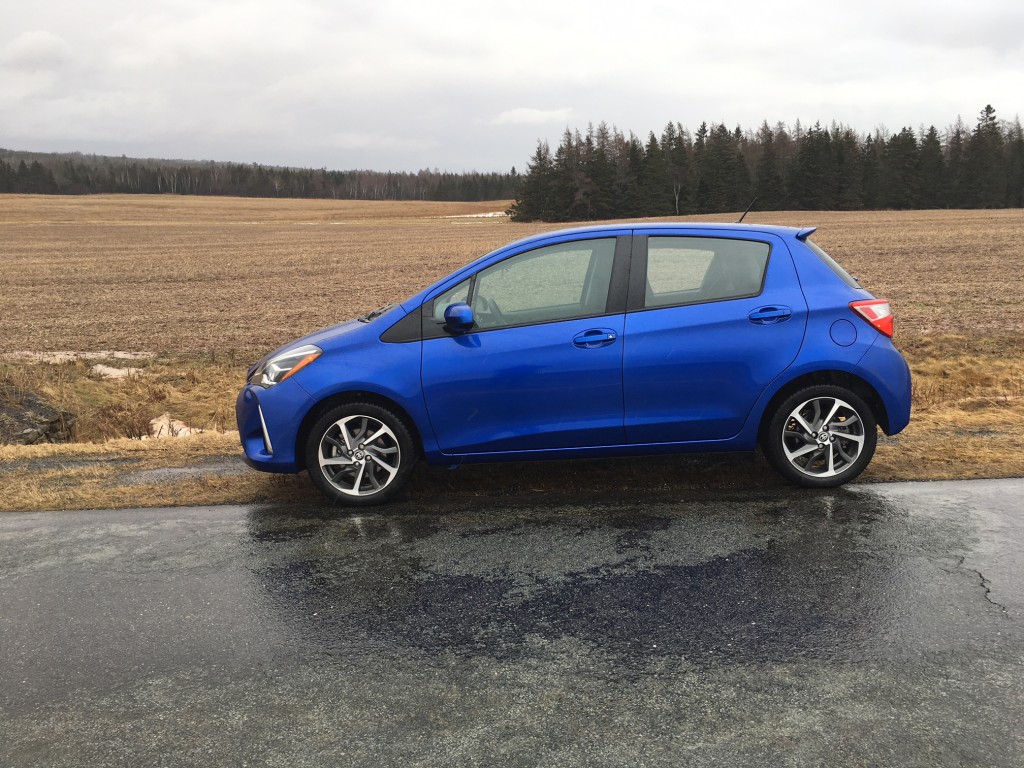 The Yaris is the smallest vehicle in the segment and among the narrowest. Believe it or not, there’s a slight advantage to this, aside from being easy to park, and it’s in the form of the wiper blade. There’s only one and it does an impressive job of clearing most of the windshield’s surface. It also means you’ll only need to buy one, not two, when it comes time to replace it. 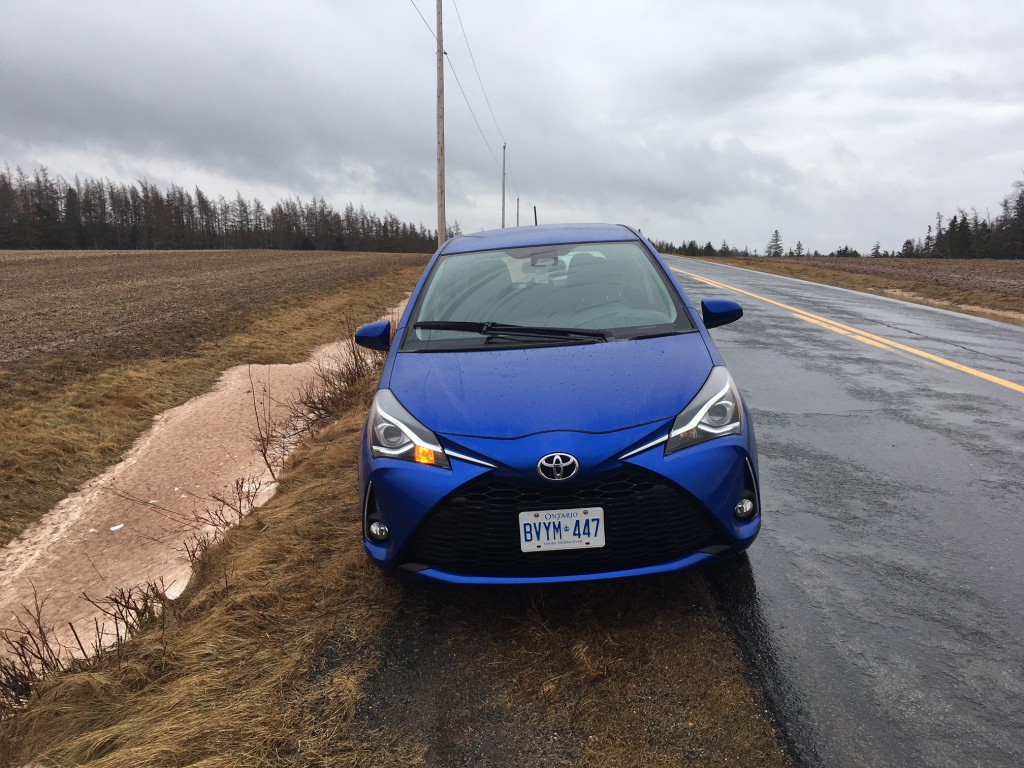 That narrow feeling is noticeable inside, especially when you have a passenger sitting next to you, but there is plenty of headroom to counter any sort of feeling of claustrophobia. Rear seat legroom is adequate and it doesn’t look like much from the exterior, but cargo room is adequate for its size as well.

The Yaris is powered by a 1.5 litre naturally aspirated 4-cylinder which produces 106 horsepower and 103 pound feet of torque. Before you go rolling your eyes at those figures the Yaris doesn’t feel as sluggish as you might expect. It’s still a painfully slow vehicle, but not to the point where you wouldn’t be able to still zip about town. The engine itself is about as old as Betty White though, and those power figures are near the bottom within the segment. The Yaris’ biggest let down is its transmission. If you opt for the automatic you’ll get a 4-speed. Yes, a 4-speed. To my knowledge the Yaris is the only car in the market still offering only four-speeds. That’s a shame because not only would extra gears improve fuel consumption figures but the transmission itself is laggy and unrefined. Even the gear selector itself is difficult to operate with an unnecessarily complicated gate with vague feedback. I often found myself in neutral or low gear when meaning to shift into drive. Do yourself a favour and get the five-speed manual, which will help bring the most out of this engine. 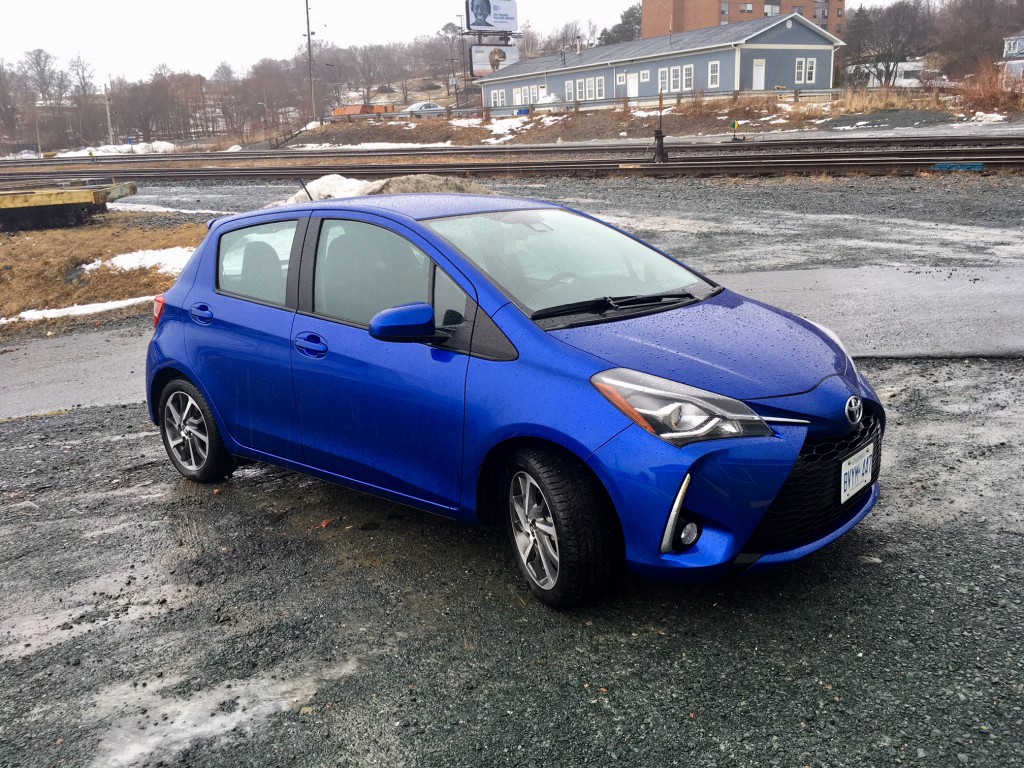 As mentioned, driving around town isn’t too bad at all. The Yaris has some pep to its step at lower speeds and it has an excellent turning radius to match its tiny stature making it an ideal city car. It’s easy to see out of and can handle low speed handling maneuvers in the same mannerisms of a go-kart.

But on the highway, a brisk winter breeze can push it back and forth within its lane. Match that with the blatant engine noise that penetrates the cabin thanks generally being stuck in the higher rev band due to a lack of gears and your highway experience becomes unpleasant quickly. 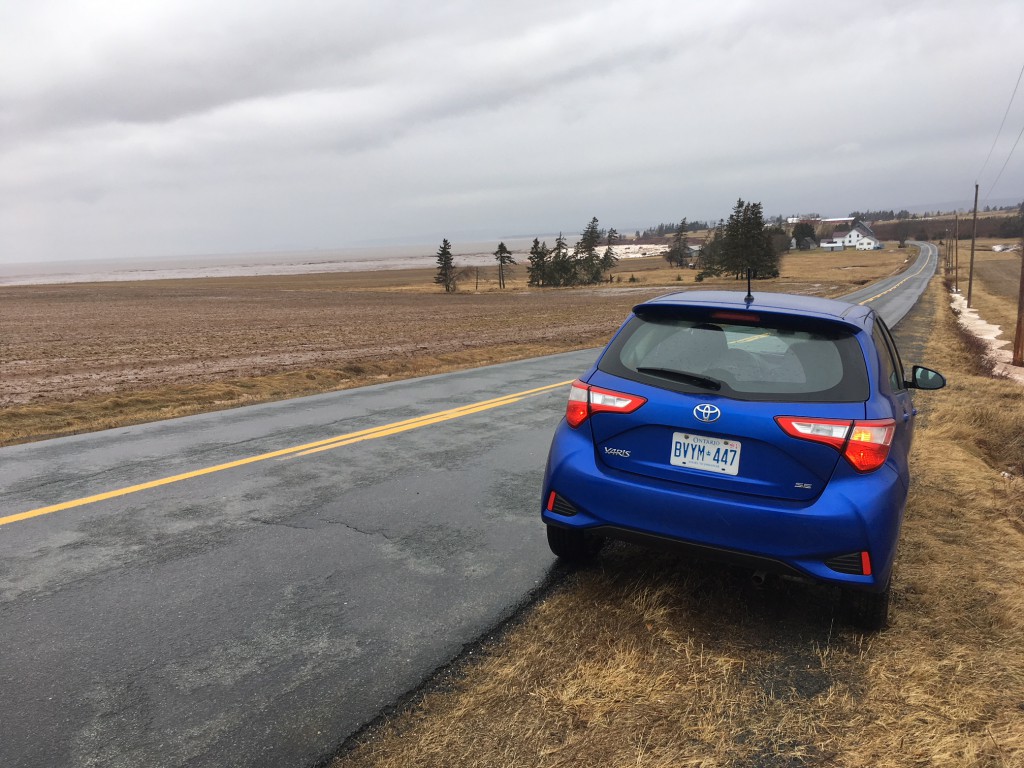 Official fuel consumption figures come in at 7.9 L/100 kms city and 6.8 highway. My week of mixed driving landed me at 7.8 L/100 kms. That isn’t bad but I can’t help how much better on gas the Yaris would do if Toyota modernized the engine and transmission combo.

And that really is the biggest let down with the Yaris. It feels seriously dated. It lacks a lot of tech. It drives with character only around town in tighter spaces. It’s unrefined. To be honest, an exterior refresh only goes so far. 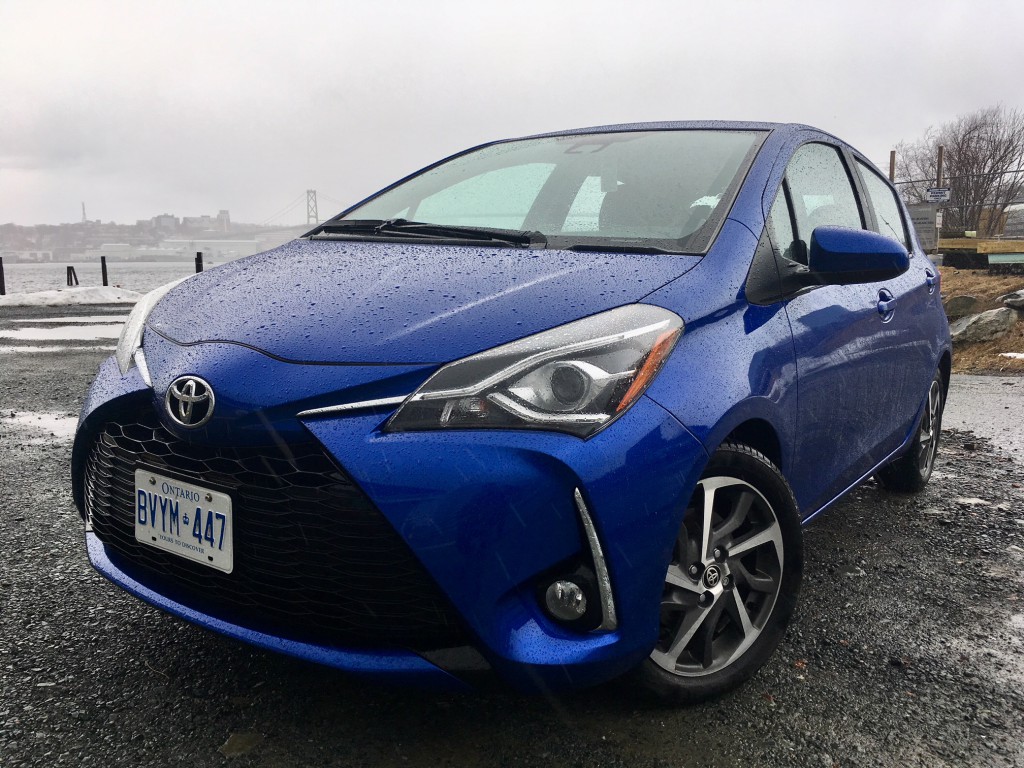 But for people who are just looking to get from point A to B efficiently and reliably, the Yaris is certainly a credible option for that, especially if the commute is largely in a city or around town. That is something the Yaris has always excelled at. The problem is the competition also excels at city driving along with on the highway and seem to offer more features as standard or at least optional. With that said, I have faith Toyota will give the Yaris the proper credentials it needs when a complete refresh comes around to successfully live up to its name.