When I picked up the recent press vehicle for the week something donned on me: not once, in my eight years of writing about and reviewing cars have I ever driven a Hyundai Accent. Astonishing, isn’t it? It’s a bit like a doctor admitting that not once has she ever treated anyone with the flu.

In fact, I don’t think I’ve even had any notable seat time as a passenger in an Accent before either. The only time that comes to mind is back in high school when one of my friend’s once borrowed his mom’s 1995 Accent three-door to get him to school. He offered me a drive that day since we lived near each other.

That’s it. I’m sure I’ve sat in an Accent or two at past auto shows but that’s obviously about as memorable as what you did the day of September 22nd, 2006.

Well, I finally broke the eight-year streak that I didn’t know I had going and spent seven days with the revamped 2018 Accent. 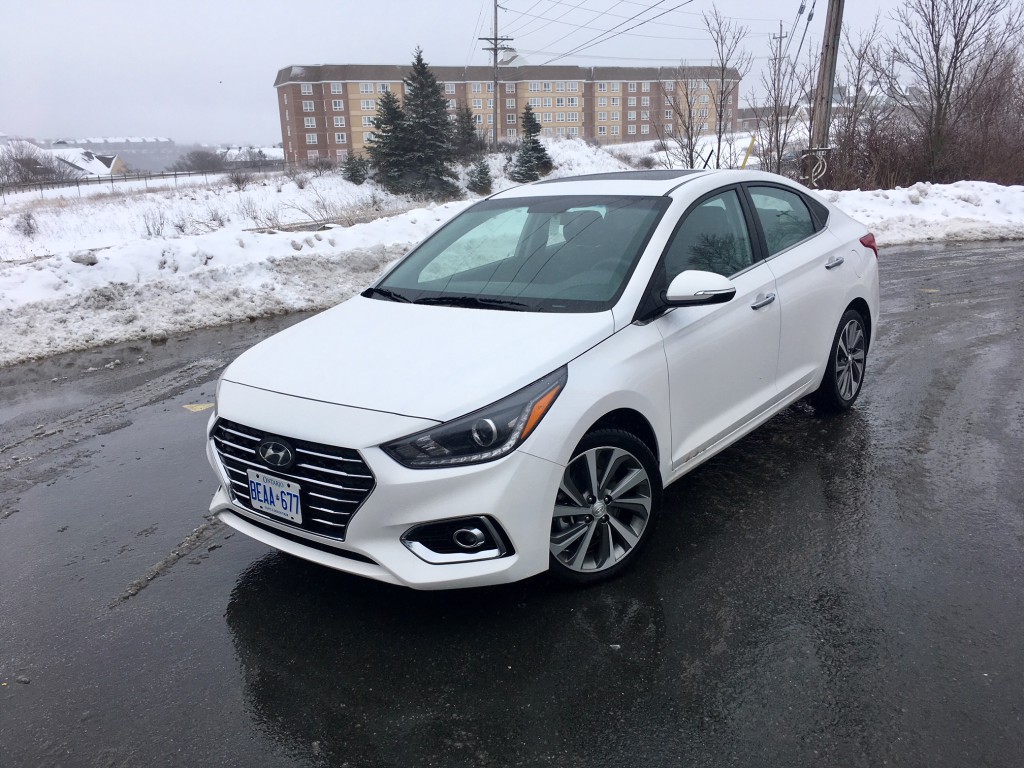 The Accent has certainly had its ups and downs, but in Canada, specifically in Quebec, the vehicle is well regarded as cheap, sensible transportation. We Canadians love our Accents, especially in hatchback form.

In fact, we love our Accent hatchbacks so much that Hyundai Canada is going out of its way to bring them to our shores while the USA has opted not to sell them south of the border.

The hatchback won’t be available for another couple of months so Hyundai Canada sent me the sedan in the meantime. 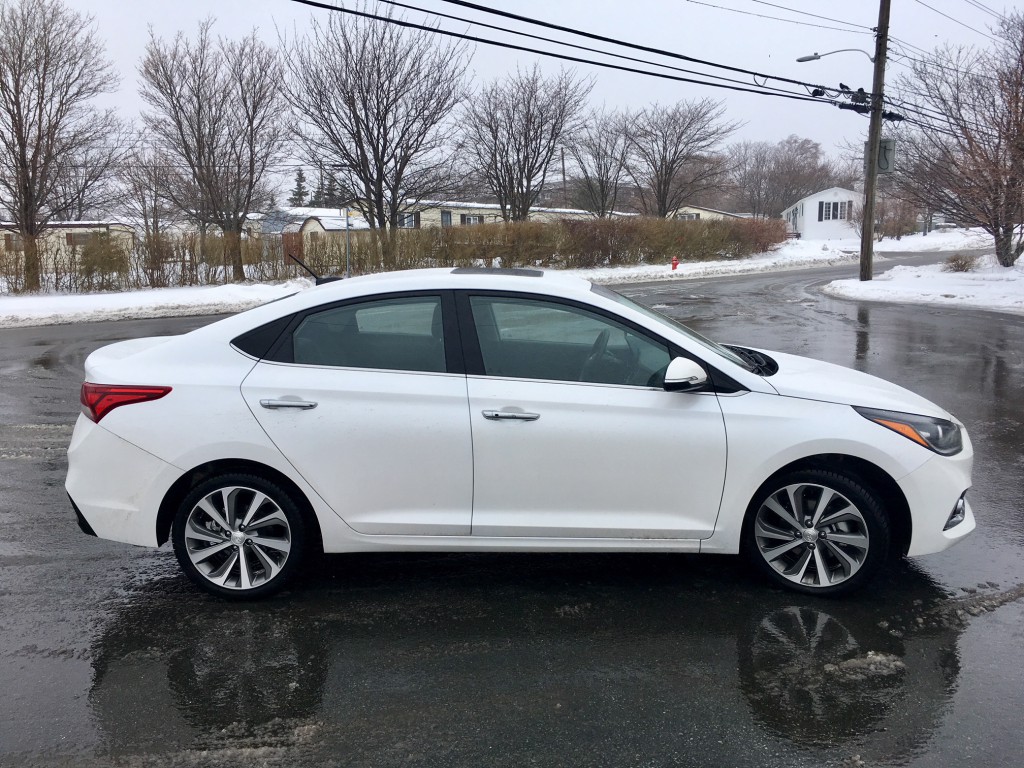 The design is certainly an evolutionary approach. It keeps the overall general shape of the previous Accent sedan but includes Hyundai’s new corporate look featuring their new cascading grille and signature three-pod rear lighting. My top of the line tester adds nice-looking 17-inch wheels, chrome on the door handles and other trim bits, projector-style headlights and LED daytime running lights. Those who saw it says it reminded them of a baby Hyundai Elantra, but personally I think Hyundai took its cues from their mid-size Sonata. The design generally works well in compact form, it is handsome, though it’s not dramatically different either. 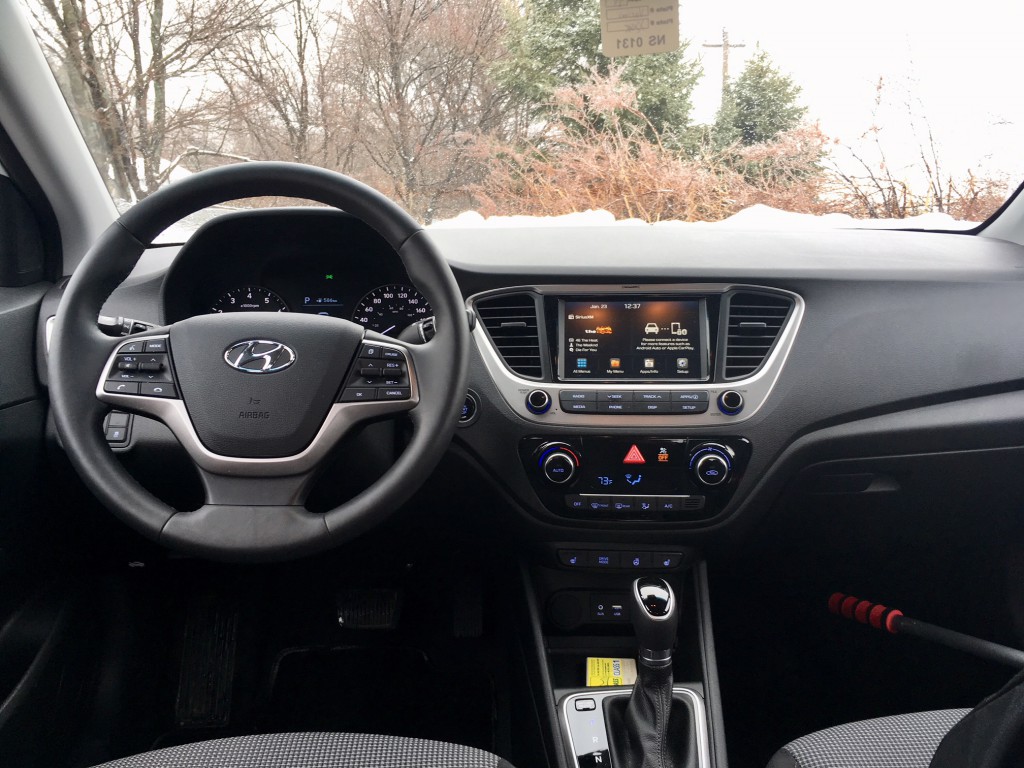 The interior won’t make the eyes pop out of your face, but it is inoffensive and traditional. There are hard plastics to be found throughout, but not in any place that actually matters. I don’t know why people complain about hard plastics on the dashboard, for instance. How often do you actually touch the dashboard? 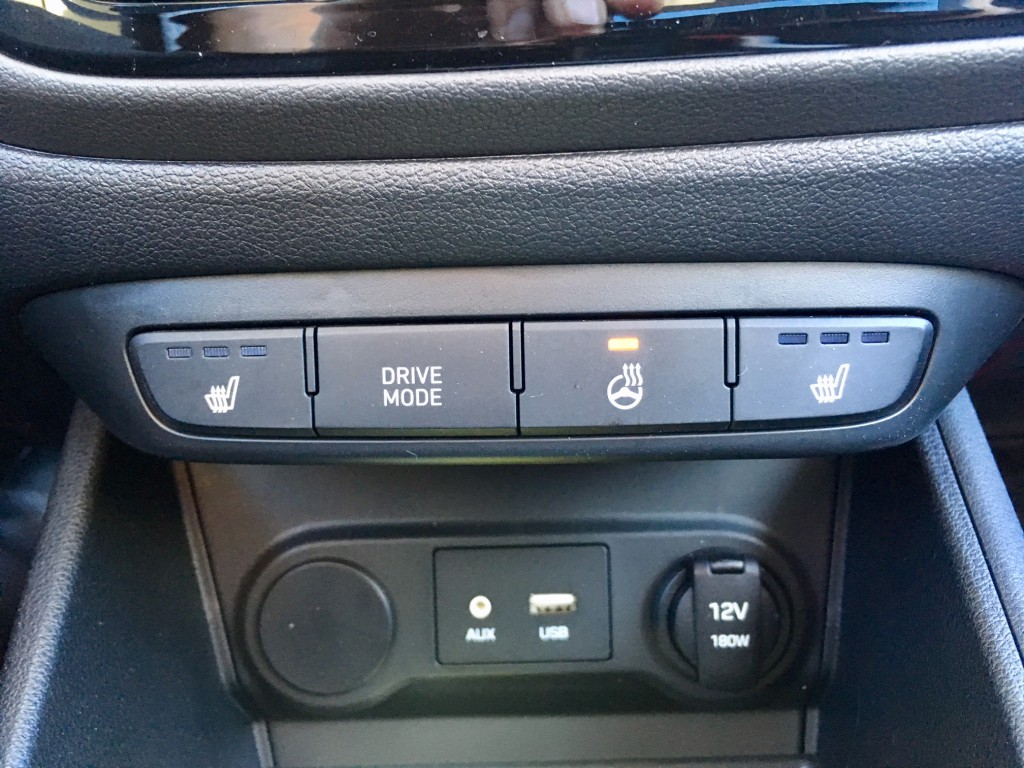 Being a Hyundai, value is top of mind. As such, on the top trim, you get a leather shift knob and steering wheel, Bluetooth, Satellite radio, Apple CarPlay, Android Auto, heated seats and a heated steering wheel. To my knowledge, Hyundai is the only company to offer the latter in this segment and it was greatly appreciated. The heated seats themselves can be left on the first setting – they heat up quickly and ferociously. The seats themselves are comfortable, but there doesn’t seem to be any leather option available. The Honda Fit, Ford Fiesta and Kia Rio all have leather seating optional. The highest trim Accent doesn’t even get any LED taillights either. 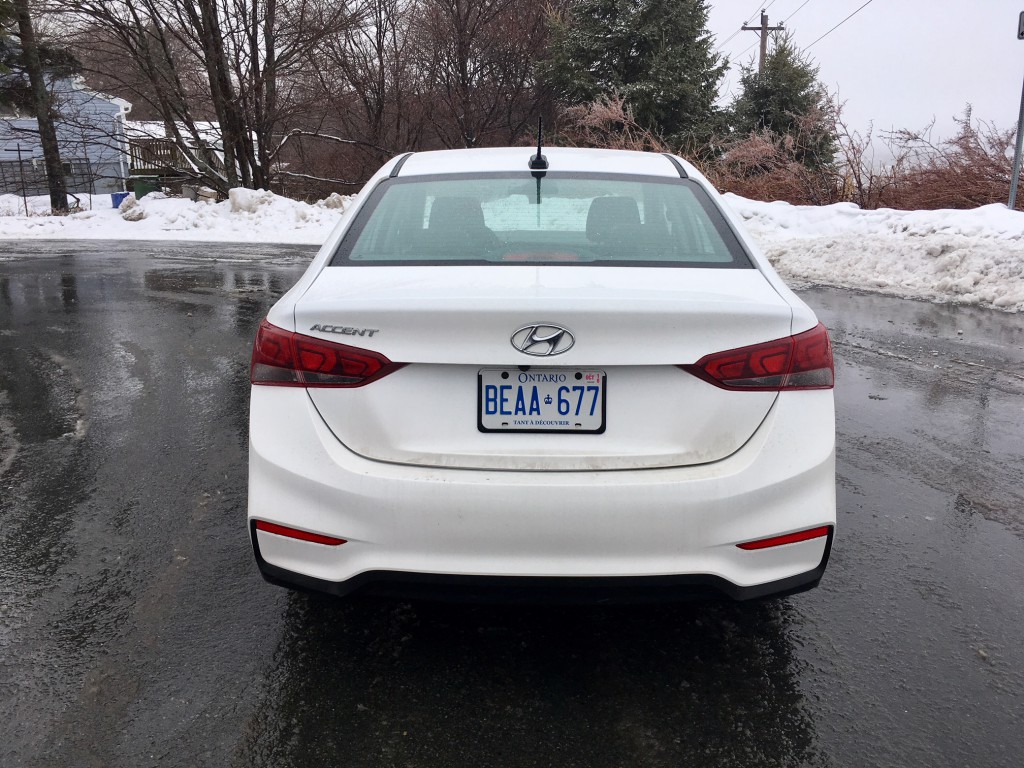 Likewise, the competition is starting to beat out Hyundai when it comes to another form of value: safety. Toyota and Honda have recently started offering their suite of safety tech on their cheapest models such as adaptive cruise control, forward collision alert, lane departure warning, blind spot monitoring and more. None of these features are available on the Hyundai Accent. As mentioned, a heated steering wheel is nice, but if I had to choose, I’d rather have the safety tech. A heated steering wheel doesn’t matter much when you’ve gotten yourself into an accident that could have been avoided had the tech been available. 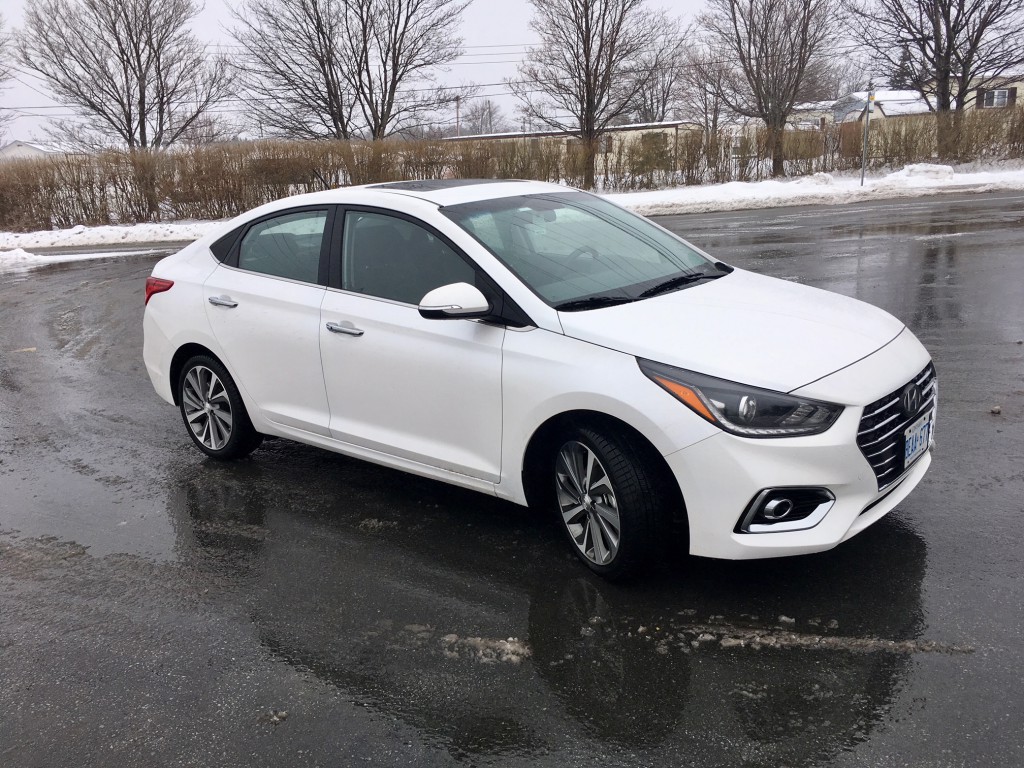 Interior headroom is good and I’d call rear leg room adequate. It’s bigger back there than a Fiesta, but I’m not sure it’s bigger than a Honda Fit. Being a sedan, it’s not nearly as versatile either, but again, the hatchback is coming soon (and Hyundai claims it will have more cargo space than a Nissan Qashqai), and the sedan still nets a decent 13.7 cubic feet of cargo room with the seats up, and just under 104 with the seats folded down. 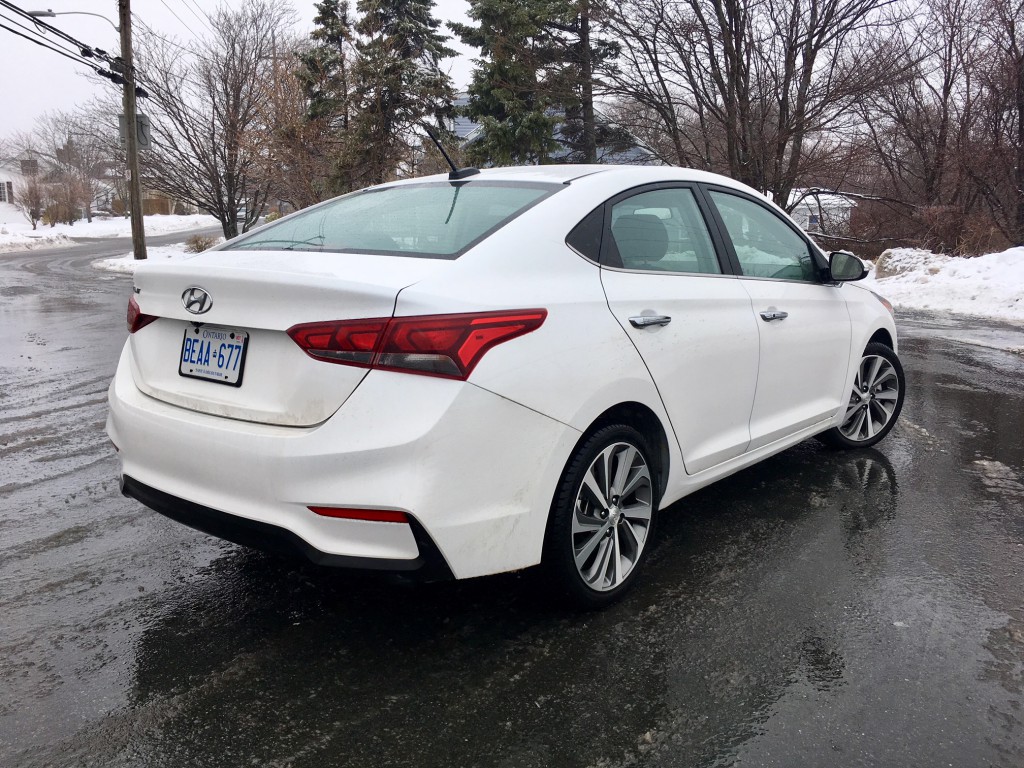 You get only one option for propulsion and it comes from a 1.6 litre naturally aspirated 4-cylinder which produces 130 horsepower and 119 pound feet of torque mated to an available six-speed manual if you get the base model, or a six-speed automatic if you choose any of the upper trims. It’s interesting to note that power is actually down from the previous model’s 138 horses and 123 pound foot torque. Having never driven an Accent until now, I can’t comment on if this power loss is noticeable, but it’s safe to say it’s adequate for city driving and the new engine is seven percent more efficient. 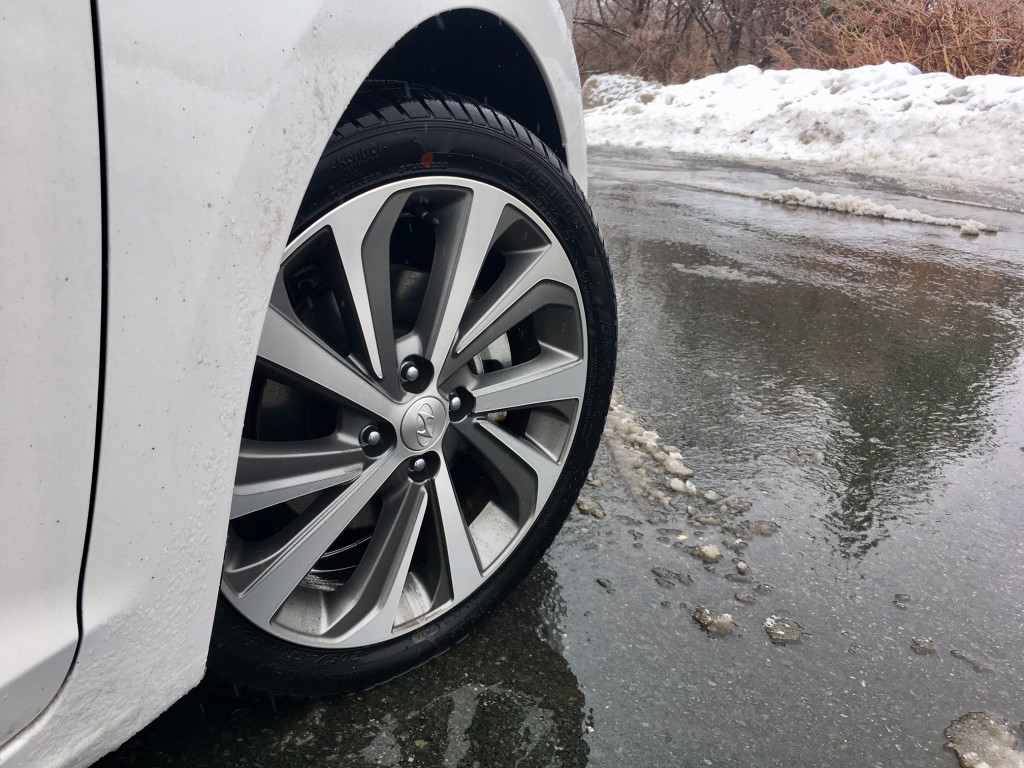 I found it struggled a little bit when merging onto the highway, but thankfully there’s a drive mode button that can put it into sport mode. Since Sport mode is the only driving mode available, I’m not sure why they didn’t just name the button ‘sport’ instead, but I digress. Sport mode doesn’t turn the Accent into a BMW M3, but it opens up the throttle and engine allowing for more usable power quickly. I found myself using this mode while merging or passing on the highway and it does just fine when the button is pushed. While on the highway the Accent feels fairly stable though excessive wind can easily push it back and forth within its lane and wind noise is also noticeable. 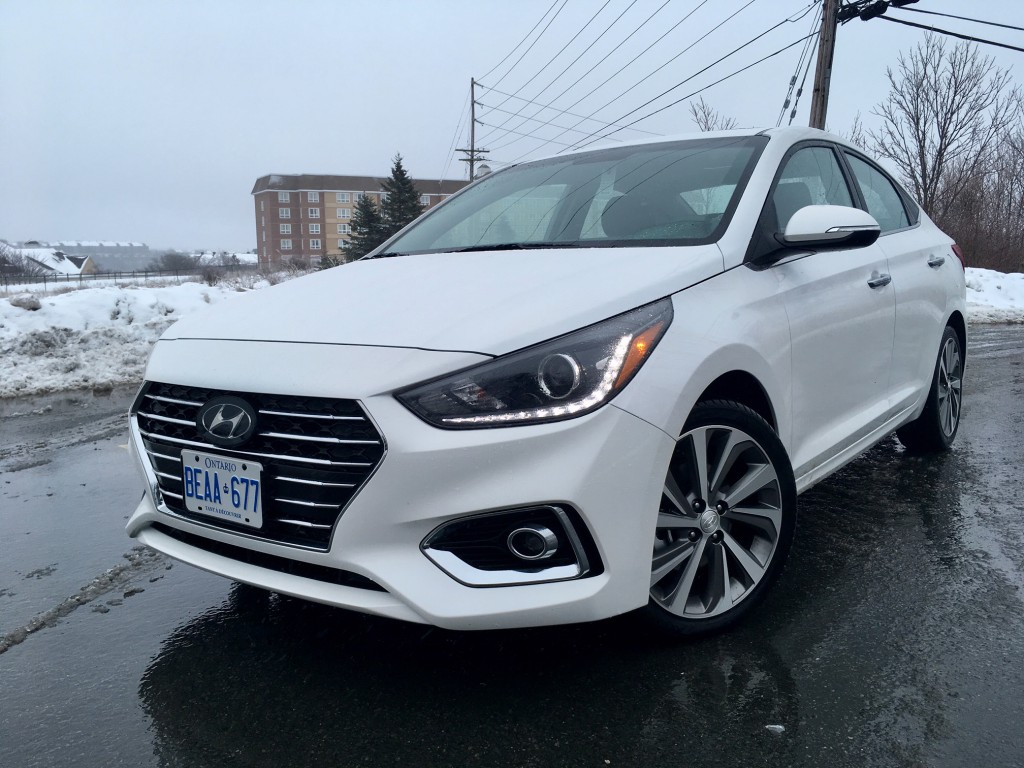 Steering is sharper than expected and indeed so is handling. Sure the Accent will get out of sorts quickly if you pretend you’re in a Porsche 911 but its road competency is respectable thanks to a fairly compliant suspension set up and stiffer overall structure.

Official fuel consumption numbers and pricing were not released as of the time of this writing, however Hyundai Canada has said that there would be a slight increase over current pricing which starts at around 14K for the base and can get up to 20K for the top of the line GLS. For what it’s worth, I ended up averaging 7.6 L/100 kms in mixed city/highway driving. The official numbers of the 2017 Accent are listed at 8.9 city and 6.6 highway. 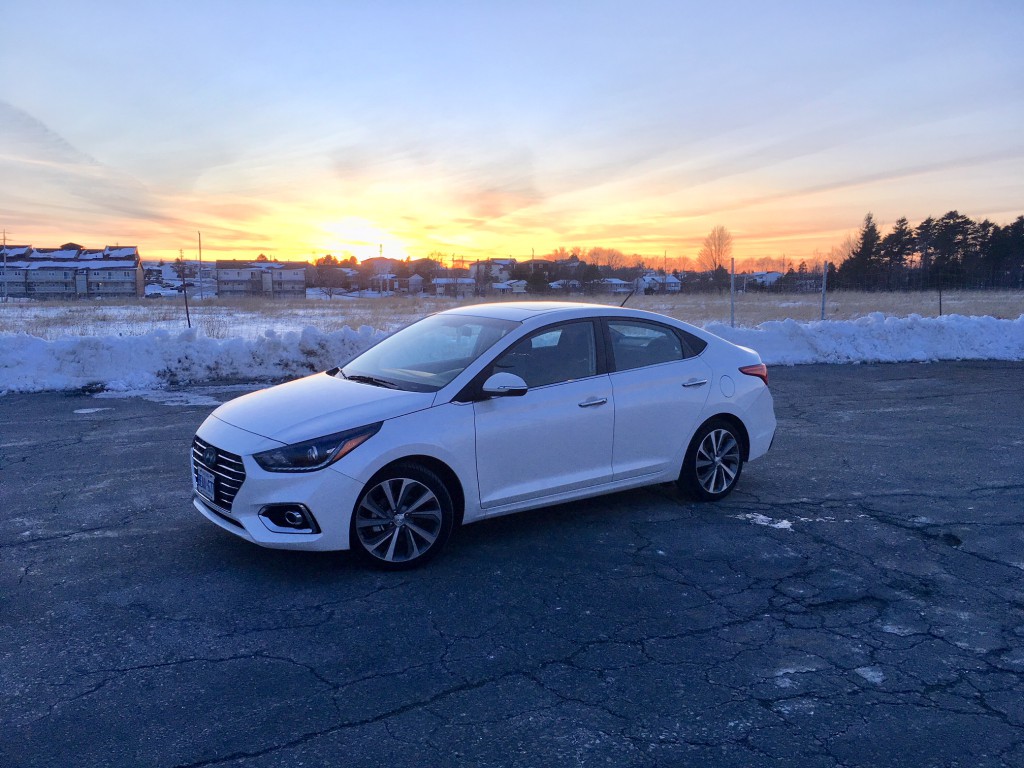 Overall, the Accent is certainly what you’d expect from a modern day Hyundai. The new model looks more grown up, it has increased efficiency, tech all with a dash of value thrown in. But while the Accent sedan generally impresses, I would hazard to guess that you might be doing yourself a disservice if you didn’t wait a little longer for the hatchback to become available, like a good Canadian. The added cargo room and versatility is sure to be a winning combo in this type of car.