You may have heard the commercials before. Mitsubishi is claiming to be the creator of the best selling plug-in SUV in the whole world with the Outlander plug-in hybrid electric vehicle (PHEV). It’s a bold claim. Though, in a sense, it really isn’t.

The fact of the matter is, Mitsubishi can likely only claim sales leader king in this marketplace because the market itself is scarce with competitors.

When comparing the Outlander PHEV to an apples to apples competitor, the only one that comes close is the Mercedes-Benz GLC 350e, which I reviewed earlier this year. Others in the segment include the likes of BMW, Volvo and Porsche. In other words, premium brands tend to be the dominant offering in the category, making the Mitsubishi the sole non-premium player in our market, which means a lower overall MSRP, which of course means more buyers are able to afford it over the competitors. That’s why Mitsubishi can claim to be sales king: it has the cheapest offering from the most mainstream brand. Sure, Mini has the Countryman E, but I would be on the side of arguing that it is also a premium brand, naturally. In any event, as is the case with most marketing campaigns, be sure to scrutinize the language.

But surely there must be more to the Outlander’s PHEV’s worth than it’s price point. I took one out for a week to find out. 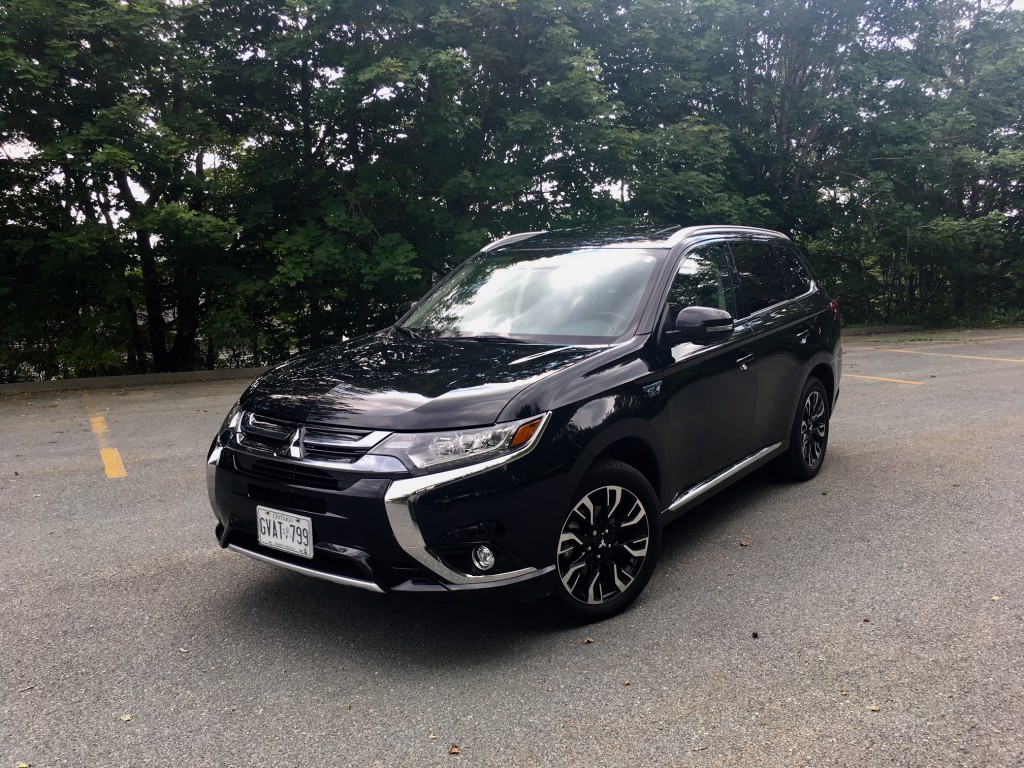 As far as appearances go, the Outlander PHEV looks largely the same as the regular outlander. Only a few minor details give away its electrification. It has it’s own unique wheels design (a nice turbine-like style), two portholes; one on each side (one for gas, the other for electricity) and of course, PHEV badging. Otherwise it is your standard looking Outlander, which is to say, unique looking in its own right, though the design is certainly getting long in the tooth. 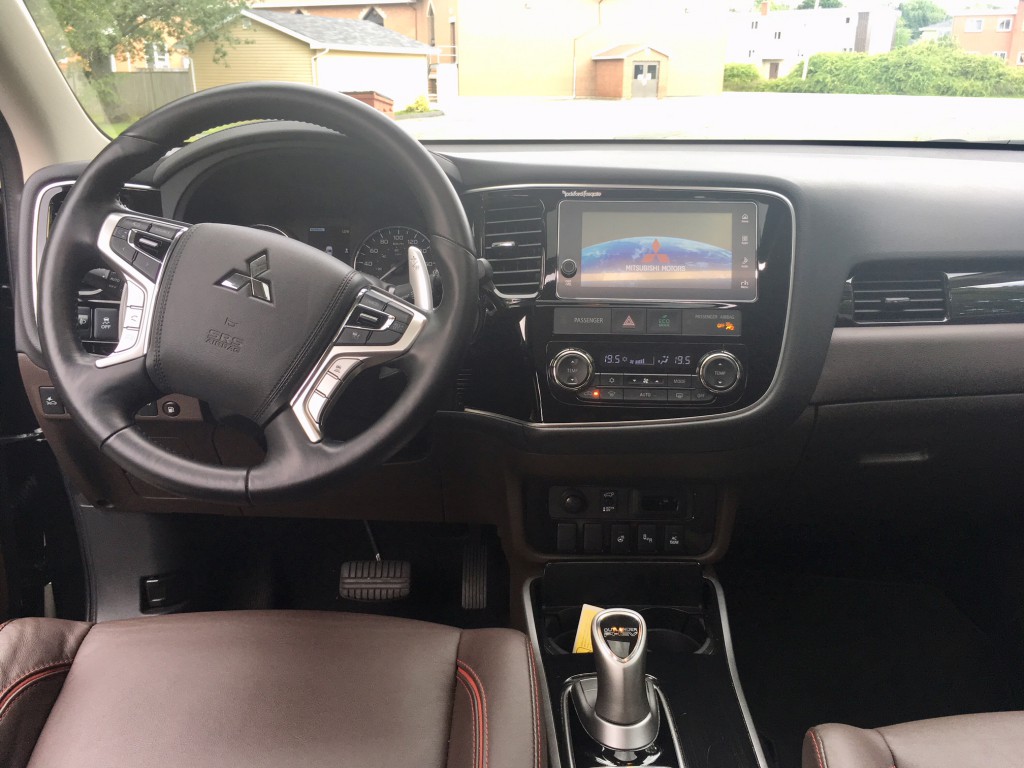 Inside, there are some noticeable changes not least of which is Mitsubishi’s clear desire to be a legitimate competitor amongst its premium-based peers in the segment. This is probably the swankiest Mitsubishi I have ever sat in thanks in-part to high quality chocolate leather seats, a unique and high-quality steering wheel (which looks and feels fantastic) along with the futuristic looking gear lever that admittedly looks odd, but fits quite perfectly in the palm of your hand. It is an electronic shifter and does the trick well, aside from when you put it in park via a button placed awkwardly in front of the shifter causing you to have to reach around on either side to access it. Mitsubishi tries to get away with a glossy piano black trim throughout to keep the premium feel going and to a degree it succeeds, though after some time you begin to realize that adding gloss black trim everywhere is akin to adding grey poupon to a wiener. Sure, it helps, but you’re still eating a wiener. 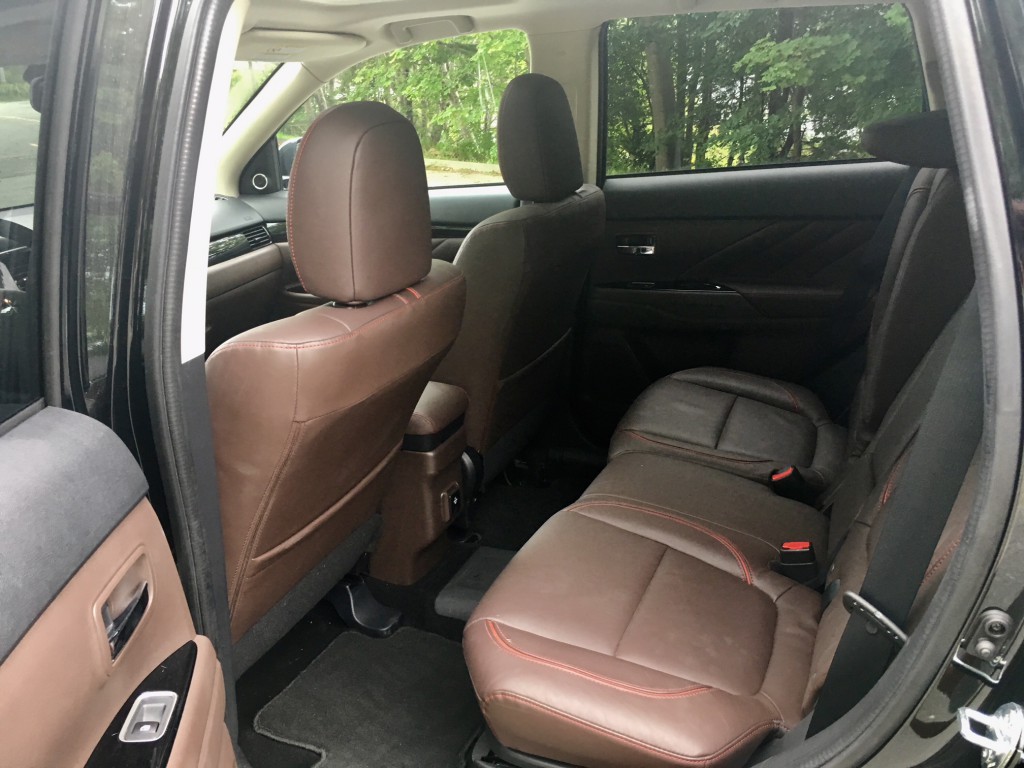 It comes equipped with Mitsu’s latest infotainment system efforts which project clear and colourful graphics. Its layout and response time is much improved over older systems. It is also Android Auto and Apple CarPlay compatible. 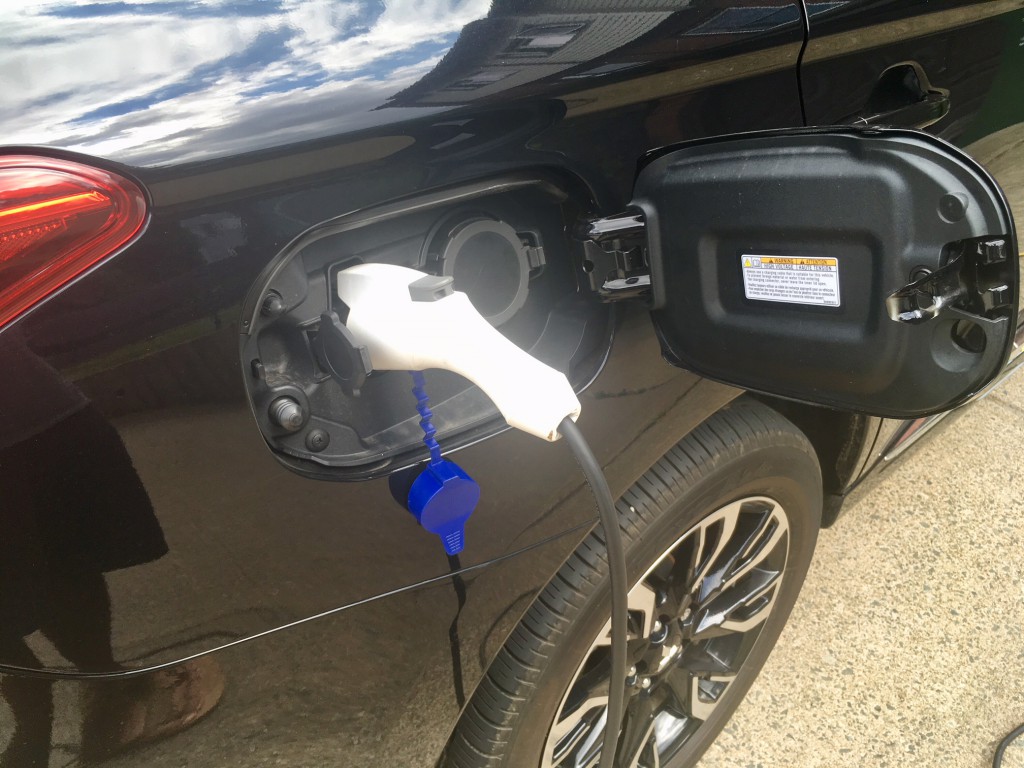 The Outlander always had good interior room and the PHEV version is no different. That’s because the batteries are located in the subfloor and between the front and rear axles, meaning there is zero intrusion to the interior. In that sense, you get the exact same practicality as a regular Outlander, which is indeed impressive. That means you’ll get over 2,200 L of room with a relatively flat load floor. The only difference is the height of the load floor itself which has been elevated slightly to make room for a cubby to store your charge connector. I’m happy to see manufacturers finding cleverer ways to hide the battery so that interior room and versatility aren’t compromised. Mitsubishi is a good example of successful implementation of that. 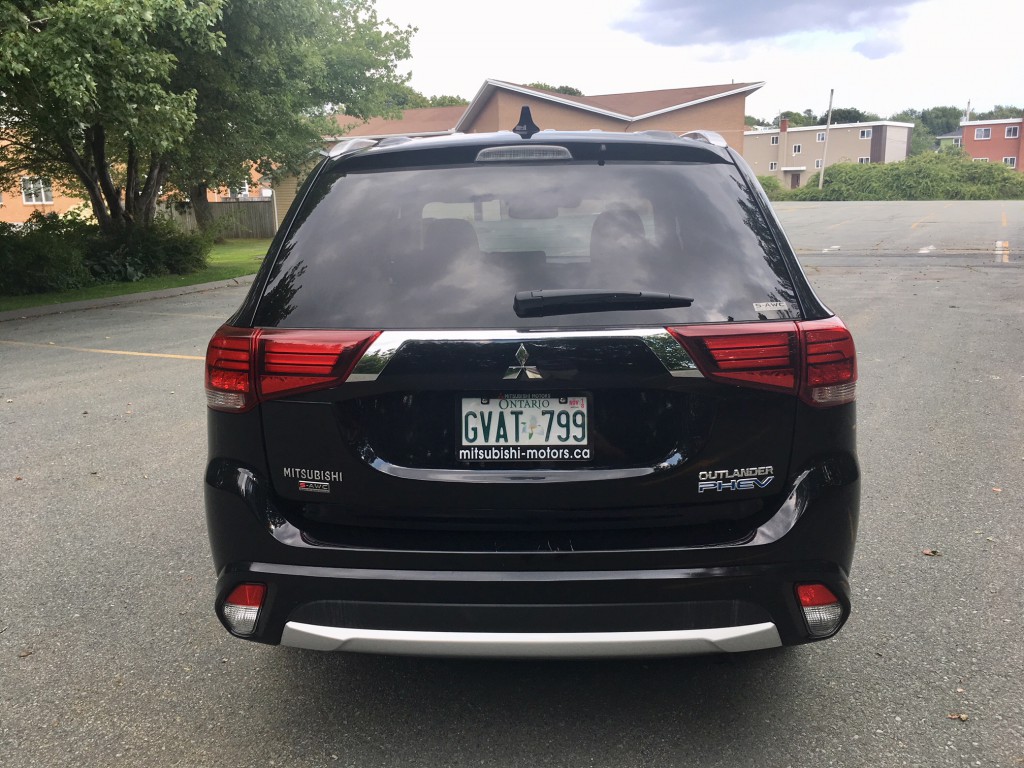 Power comes from a 2.0 litre four cylinder which produces 117 horsepower and 137 pound foot torque. Add in the power from the electric motors, which amount to 80 horsepower and 144 pound feet of torque (total figures are 197 horses and 281 pound foot torque) and you have yourself an SUV that isn’t shy to get moving when needed. It certainly isn’t blisteringly quick by any means but it is more than adequate power for most. The electric motors are “mounted at the front and rear axles to instantly supply torque on demand for incredibly responsive performance with agile four-wheel drive”, says Mitsubishi Canada. That means Mitsubishi can slap on its all-wheel control (Mitsu speak for all-wheel drive) badge on it and gives the Outlander PHEV a lot more credibility to wearing the SUV moniker. Thankfully, I have yet to experience any snow since March of this year (hoping to keep that streak going…forever), but it also meant I didn’t get much of a chance to try out this unique all-wheel drive system. 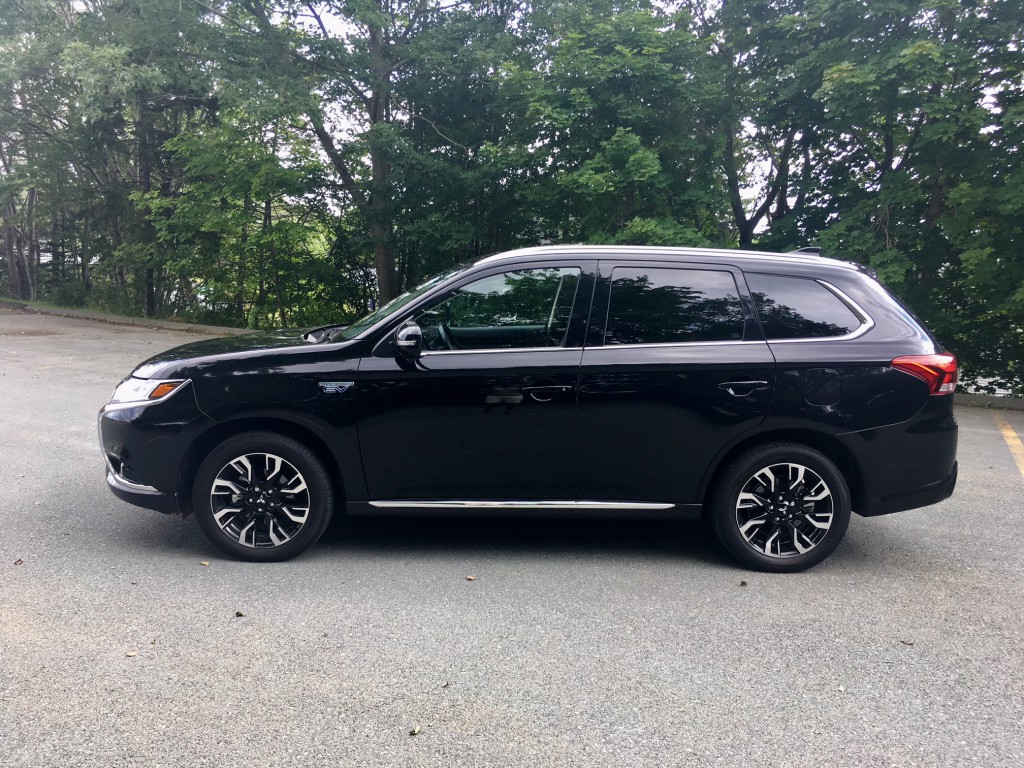 I did take the traction control off and did a bit of aggressive driving on the dirt roads around my fiancee’s farm, which the Outlander handled easily, but I think most Canadians would be interested in the system due to all the snow we get. Mitsubishi is proud to have created an SUV that still rides and acts like one and I didn’t see much indication that they might be wrong. 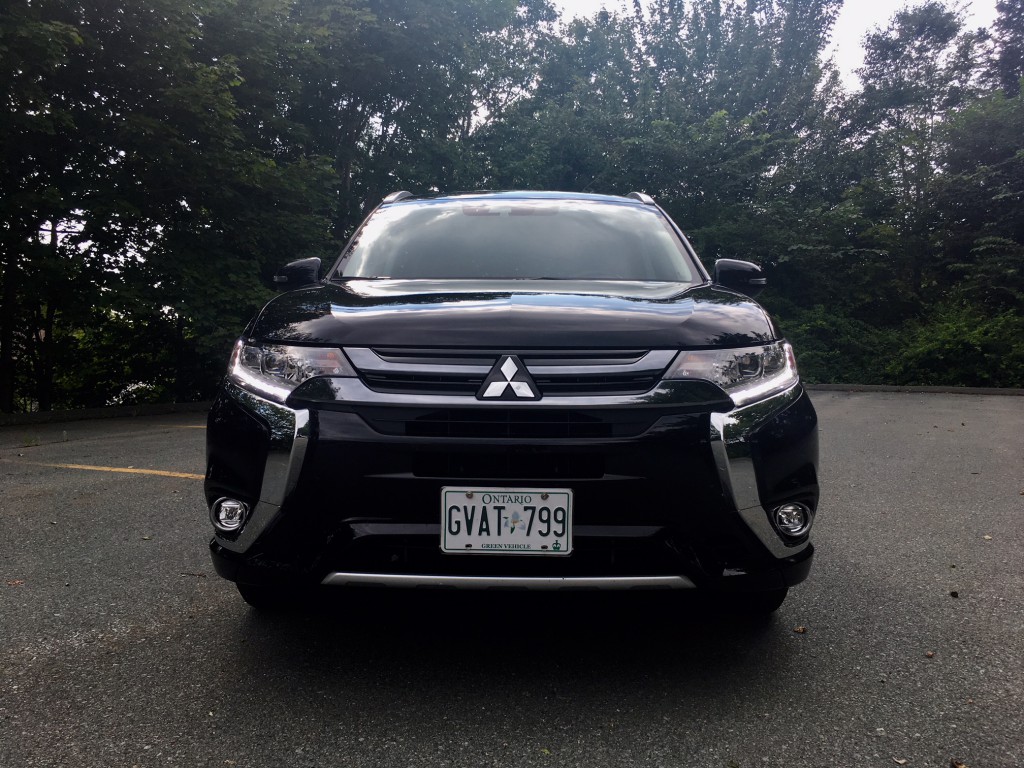 Charging is a relatively easy affair. Simply stick the charger into the porthole and voila. How long you wait for a full charge largely depends on what sort of voltage you are dealing with. If you are charging from a regular household outlet, you can expect charging to take around 12 to 14 hours. If you find yourself a 240 volt charge station you can cut that down to about two hours. Hint: go to Ikea where they have 240 volt charge stations available for free and you can easily kill two hours there. 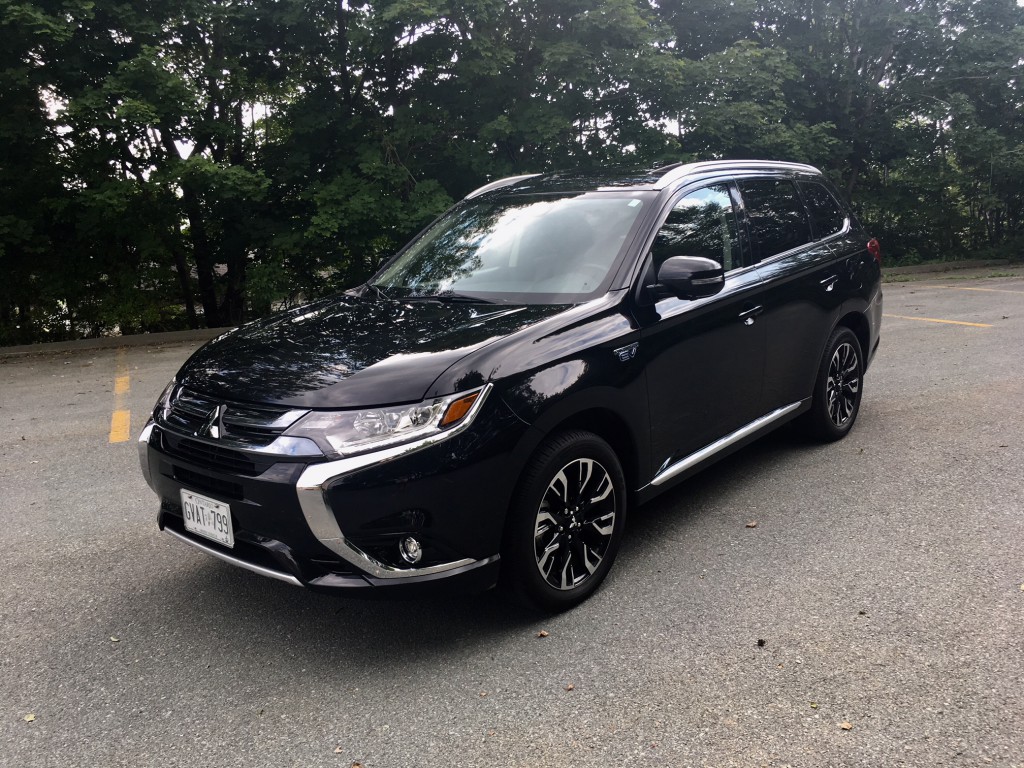 Driving the Outlander PHEV makes for a relatively quiet and comfortable experience. It is certainly one of the most refined Mitsubishis I have ever driven, but I would stop short of calling it a premium drive. It doesn’t feel particularly nimble, the handling could be described as bland and the steering feels lazy at times. If you want an SUV it’s expected that sacrifices need to be made when it comes to performance, so some of these traits could be forgiven. If you want to have your cake and eat it too, the offerings from Porsche and Mercedes are likely to satisfy, but then you’re easily paying more than double the price.

The big reason why anyone would be considering the Outlander PHEV is due to its fuel consumption figures. Officially rated at 9.4 L/100 kms city and 9.0 highway, I was able to return 9.2 L/100 kms in combined driving. Compare that to the V6’s 12.0 L/100 kms in the city and there’s a decent amount of fuel savings to be had. 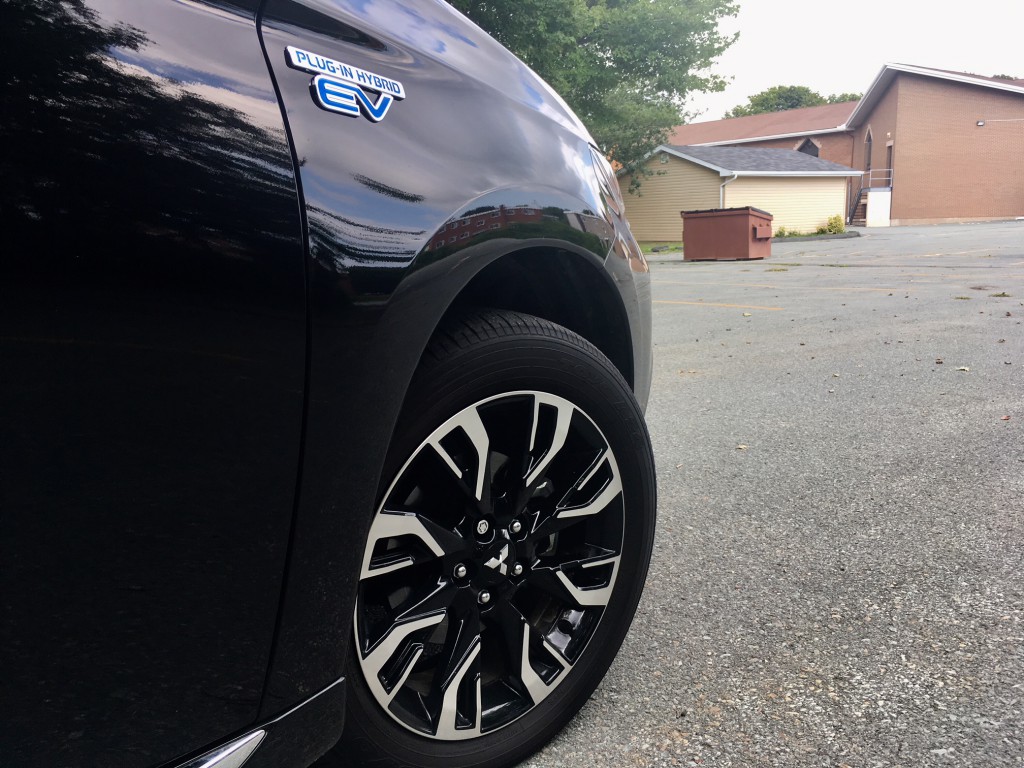 And the Outlander itself is a decent vehicle. It offers no impediments when it comes to versatility, and all-wheel drive and has a decent amount of tech to ensure you aren’t paying an arm and a leg in gas. Is it the best Mitsubishi can do? I don’t think so. But it is certainly on the right track and Mitsubishi can now claim some Canadian firsts in the process (from Mitsubishi Canada): 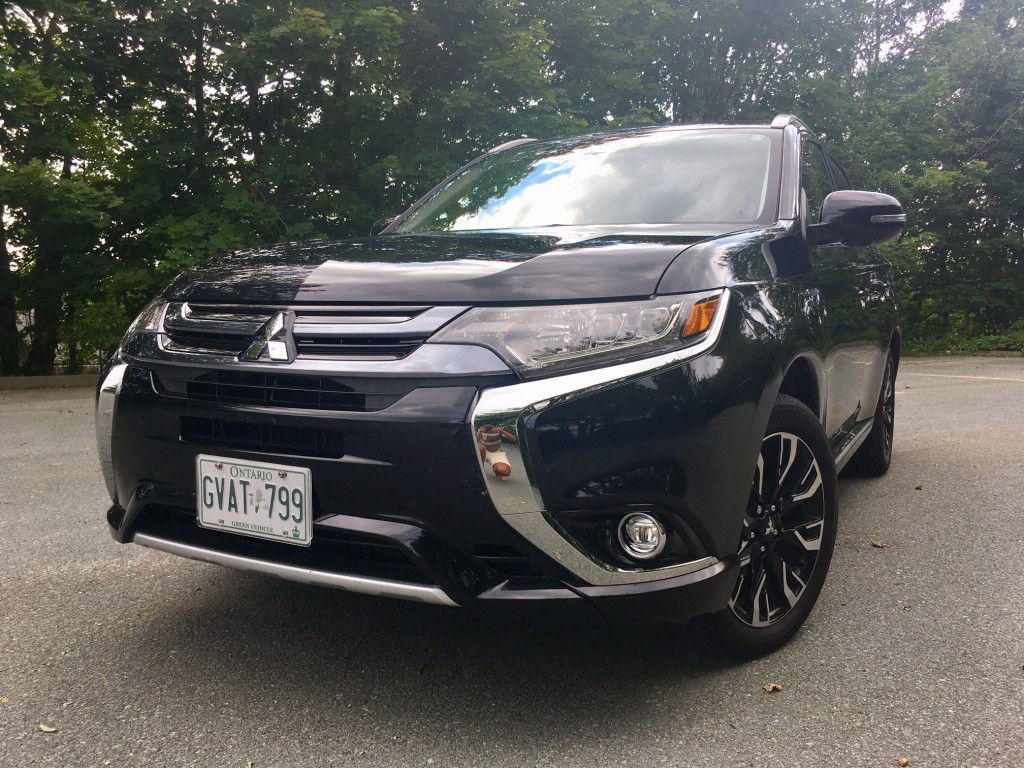