I first drove the Mitsubishi RVR about two years ago and and I started the review essentially suggesting that the RVR was both good and bad. Among the bad, a non-user friendly and uninspiring interior layout, as well as a noticeable and frustrating lack in power.

It seems, however, most people have put a higher weighting on its pros as the RVR is the second best selling product in the Canadian Mitsubishi lineup. And, in a sense, Mitsubishi was the lone player in the now hotly contested and compact SUV segment.

The Nissan Juke has stirred things up with unusual style, the Mazda CX-3 stirs things up in terms of performance, and the Honda HRV’s use of the Fit platform along with the ‘H’ badge on the front grill will keep loyalists happy.

So Mitsubishi had to do something to keep the RVR, the veteran of the pack, fresh and appealing. 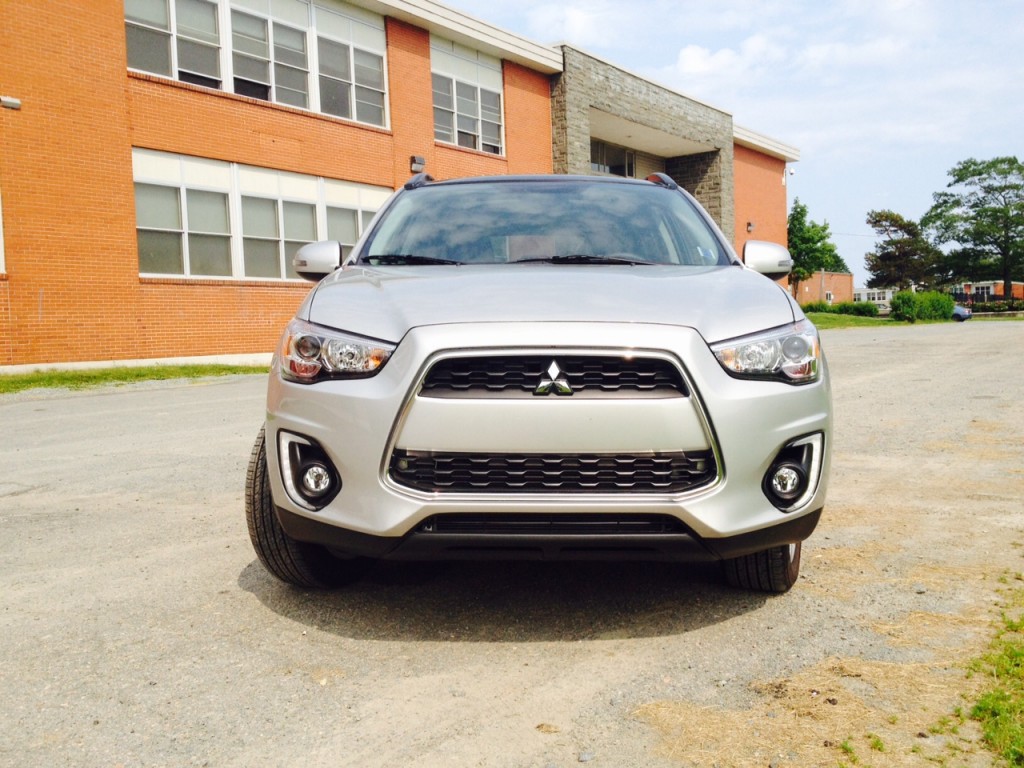 Among them is some exterior styling changes which are so minor, only a Mitsubishi aficionado could spot them. There is now LED daytime running lights. And that’s about it. A new ‘N49 Edition’ package adds more visual accessories such as spoiler, rear mud guards and special badging, but otherwise the RVR keeps the same shape it has always had. And that’s not necessarily a bad thing since it still has one of the most aggressive front fascias in the segment. My tester is the top of the line 2.4 GT AWC (which, in Mitsubishi speak, stands for ‘All-Wheel-Control’), though it was not fitted with the over five grand in still available options. Overall, the exterior still looks good, but Mitsubishi better be rolling out with a redesign soon. 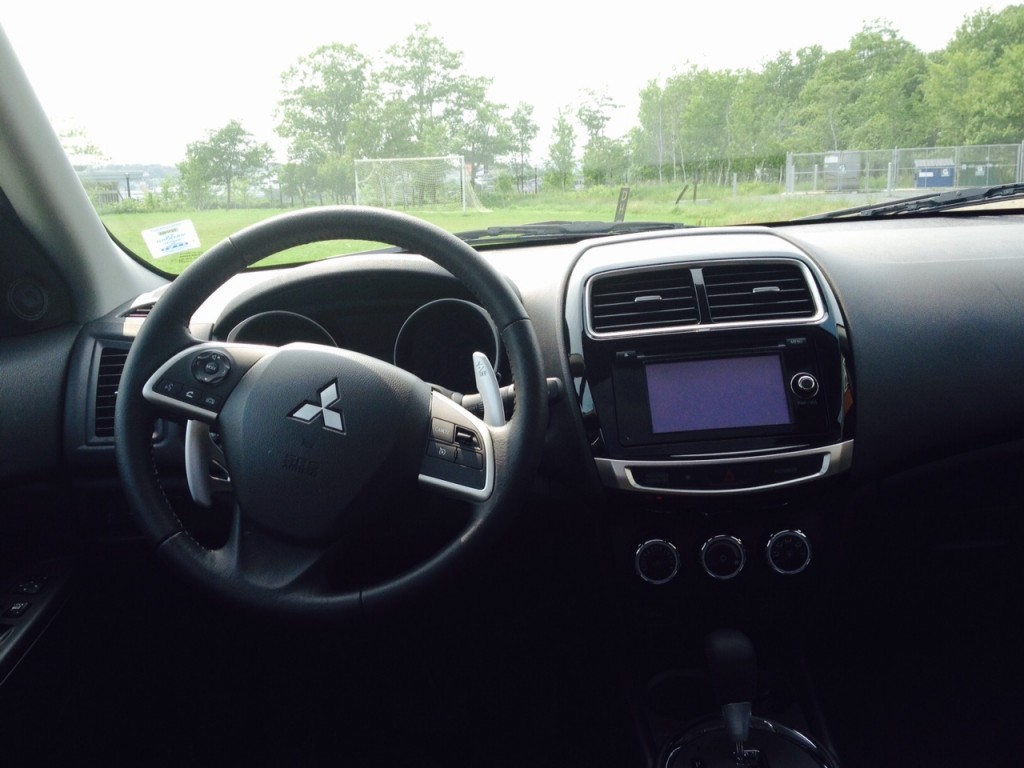 Inside I’m pleased to see things have improved in terms of functionality at least. I criticized Mitsubishi in the past for placing the seat heaters in the most asinine and unreachable spot next to the seat belt buckle. Even though it’s July and they’re not needed at the moment, I was happy to now see the heated seats placed more logically on the dash. As well, even though the layout within the infotainment screen is still a bit cluttered and still poorly lit, its responsiveness seems to have improved. As an interior in a $30,000 vehicle though, it falls a bit short with lots of hard plastics still in abundance and an all too conservative design. I am still happy to see and will continue to acknowledge that Mitsubishi, shockingly, seems to be the only non-performance brand that understands where to place the paddles for the automatic transmission. They belong on the steering column and not the steering wheel; evidence that Mitsubishi does still think of the little things. 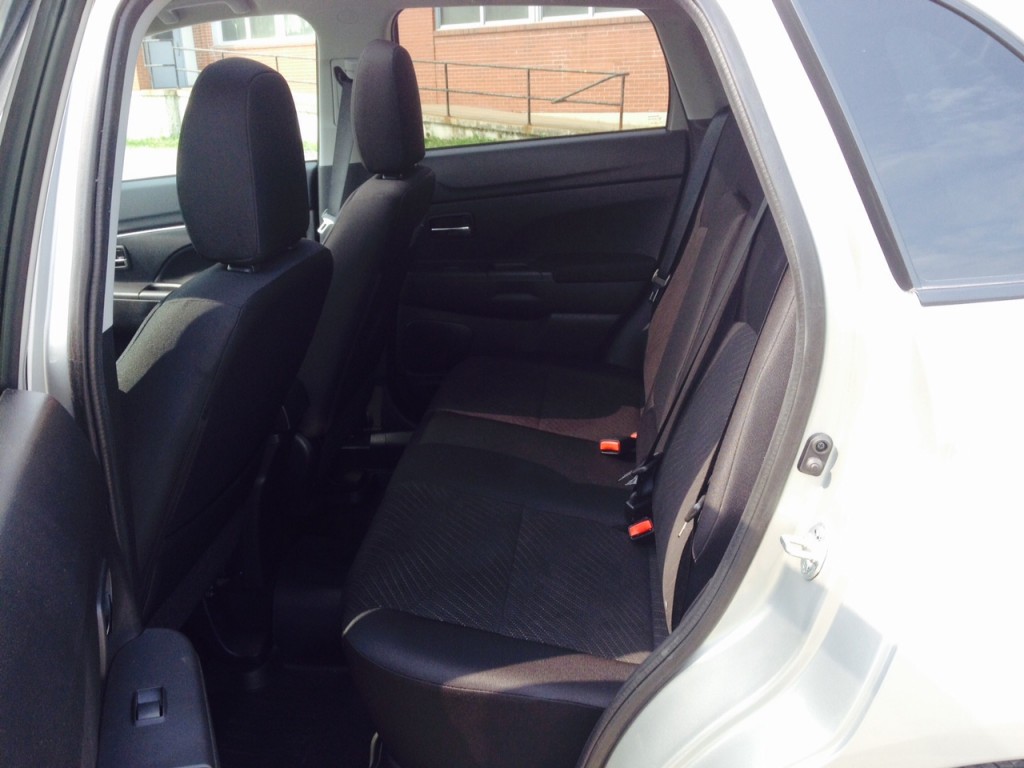 Happily, the RVR continues to do well in terms of generating exceptional interior space our of a small design. Head, leg and knee room are perfectly adequate in the back and cargo room is good even with the seats up. The GT trim comes with a panoramic roof which helps to brighten up the otherwise spartan looking interior, however the roof itself does not open. It does feature a strand of orange LED lights tucked inside the faux-roof racks which reflect off the glass for some nice ambient lighting. 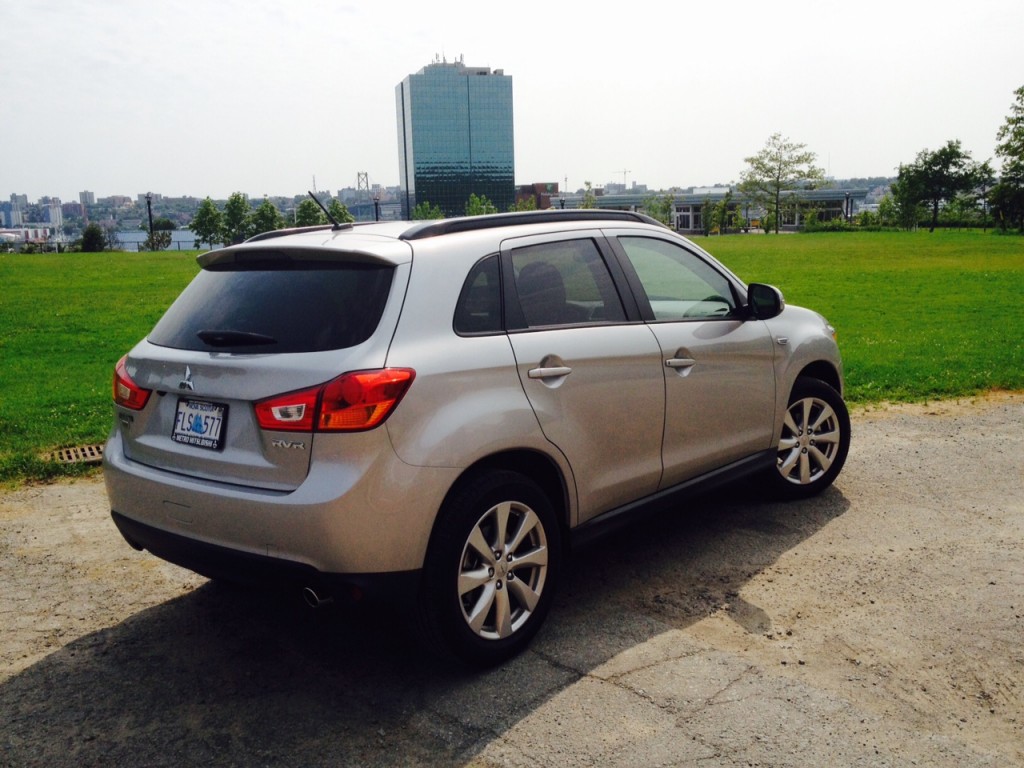 It seems as though Mitsubishi heard my criticism of lack of power quite clearly as they have added a more powerful engine option, which is likely the biggest change for the 2015 model year. It’s a 2.4 litre 4-cylinder which produces 168 horsepower and 164 pound foot of torque. That’s 20 more horsepower and 19 more pounds feet of torque over the model I tried two years ago. It’s noticeable too, the RVR doesn’t feel like a sluggish exhausted mule anymore, it now has adequate power to hustle when you want it too. You still won’t be winning any drag races, but at least you’ll now be able to save your voice box from screaming “GO FASTER” every time you put your right foot down. This new engine is still mated to the dreaded CVT, which admittedly feels a bit more refined than two years ago. There are fake stepped gears programmed into the transmission should you choose to make use of those excellently located paddle shifters, and the simulation is admittedly quite responsive. That’s good in the sense that it’s still better to have fake bacon than no bacon at all. 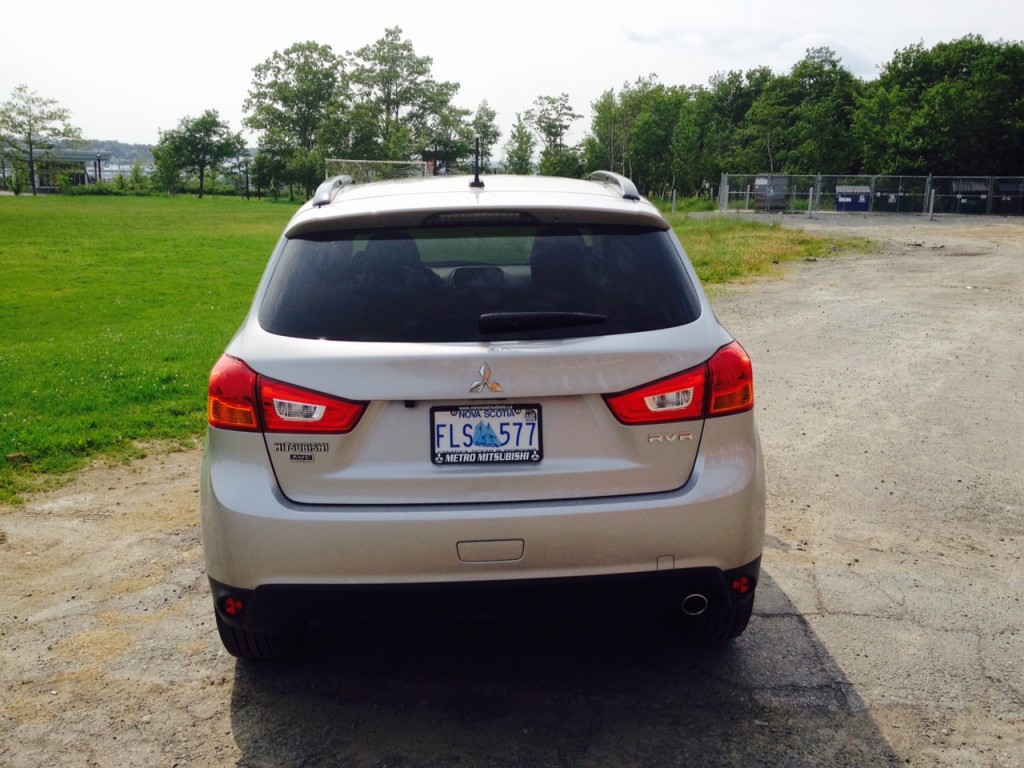 Handling still is not the RVR’s forte and the lack of steering feel doesn’t help. It’s not that the RVR feels unstable at every turn, but it doesn’t exactly exude confidence. It’s a bit like when my father said he would use a map during his trip to Newfoundland as opposed to a GPS. You know he’ll probably be fine, but you’re still not entirely confident. You know the amount of braking and steering input to take that corner is probably good enough, but you don’t have complete confidence that it won’t under steer into a tree. But at the end of the day, for typical drivers AKA people who aren’t me, you’ll probably find the RVR suits your handling needs just fine. 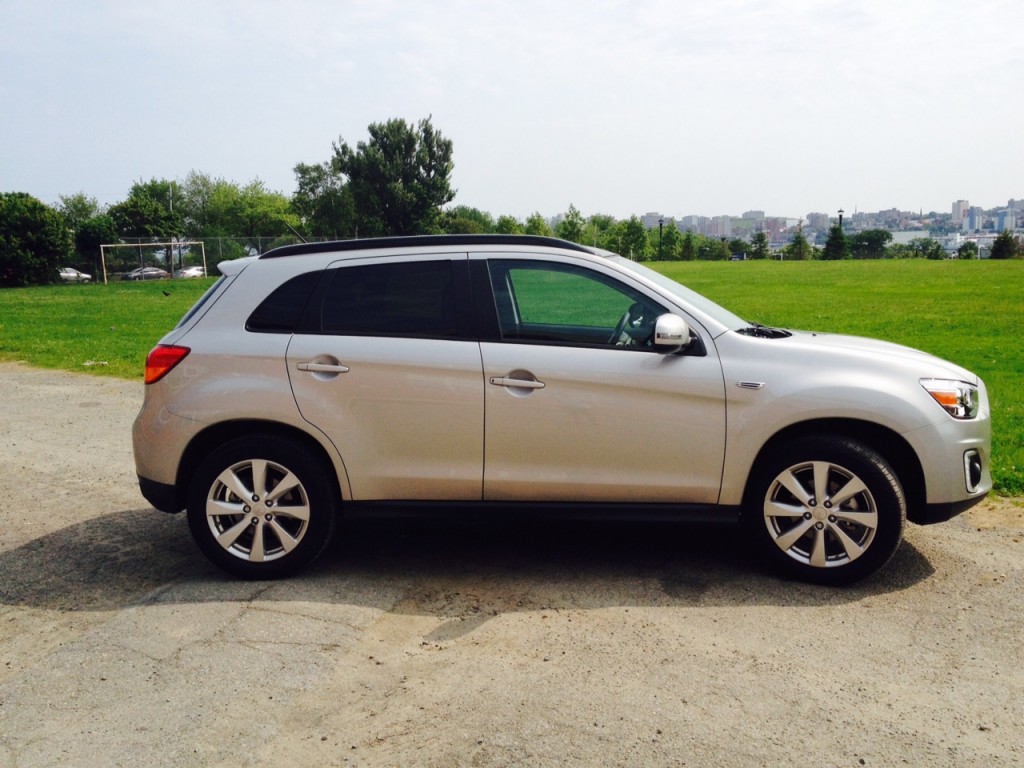 That blasted CVT does have a purpose besides sucking your soul. It does help the RVR to achieve relatively decent fuel consumption ratings of 10.4 L/100 kms city and 8.9 L/100 kms highway. I was able to return 8.8 L/100 kms in 95% city driving. That handily beats its own rating. 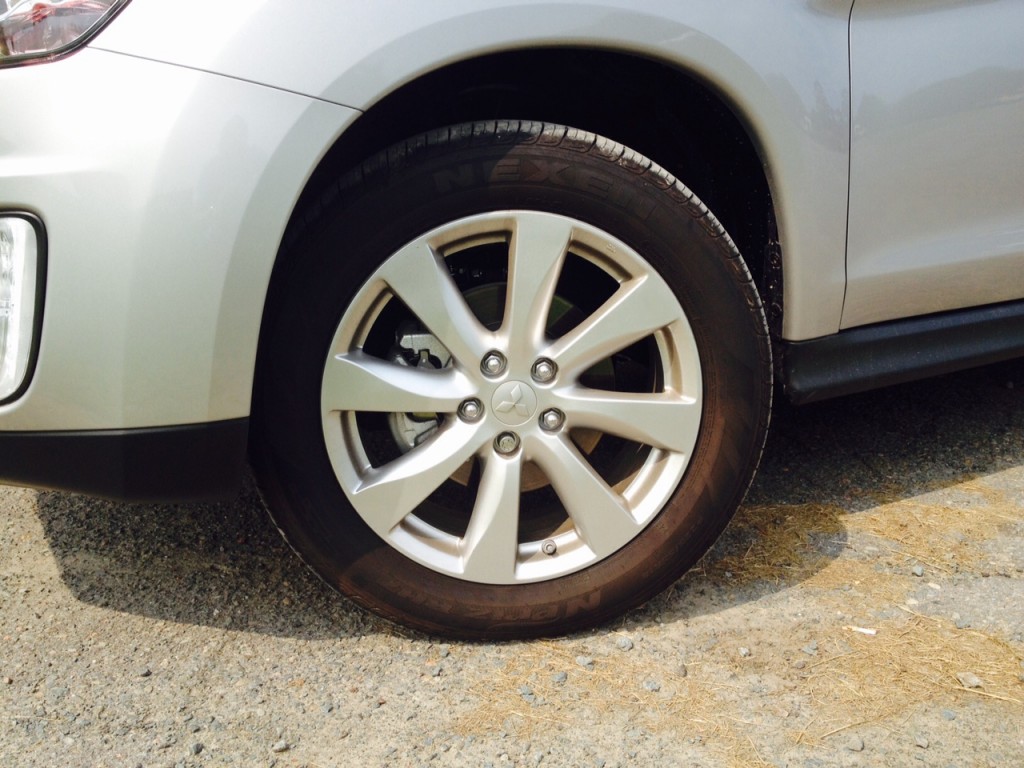 But perhaps one advantage the RVR has that its competition does not is a tremendous all-wheel  control system that comes with 4WD lock. This allows you, the driver to decent when it should engage and it also means you can keep it in 4WD whereas the competition employ haldex systems which essentially keep the car in front-wheel drive until it detects wheel spin, at which point the system will send some power to the rear wheels to help out. It’s not continuous and depending on the system, it may not even do a 50/50 split in power between the front and rear wheels. Most still have a front wheel drive bias. 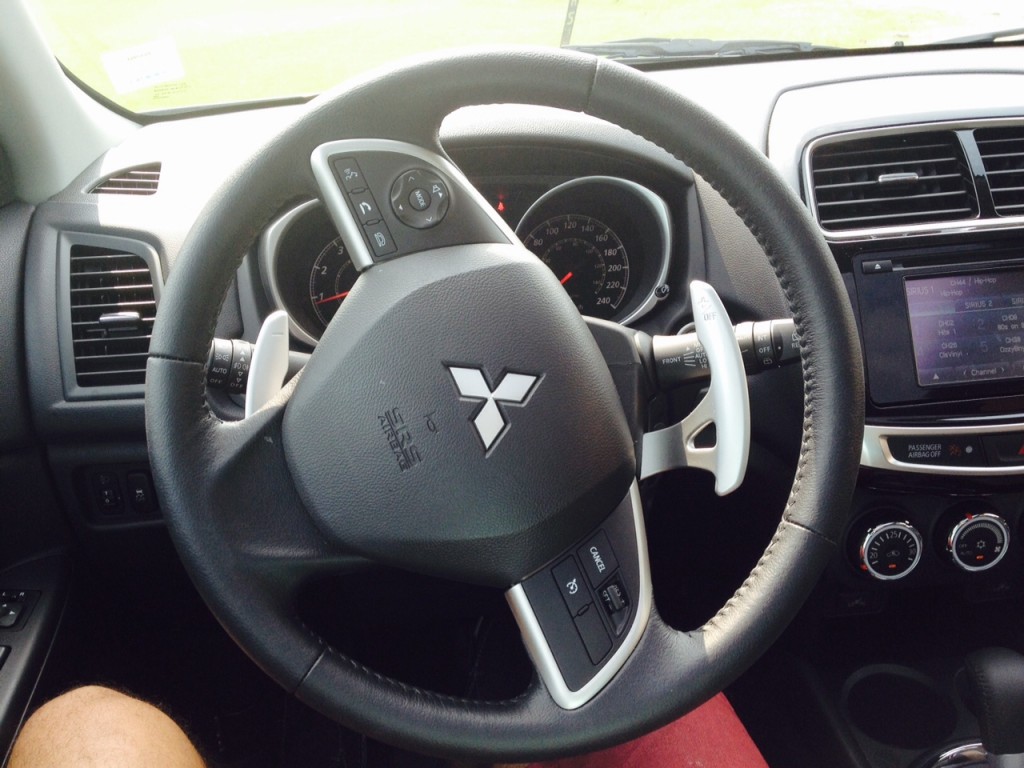 Another neat little quick that the RVR has is the ability to manually level the tremendous HID headlights which shine a light which rivals those found of luxury German automobiles. This is a great feature because, not only does it return control of the driver, but it can help keep you from blinding oncoming drivers in case you are carrying or towing a heavy load which might lower the suspension. 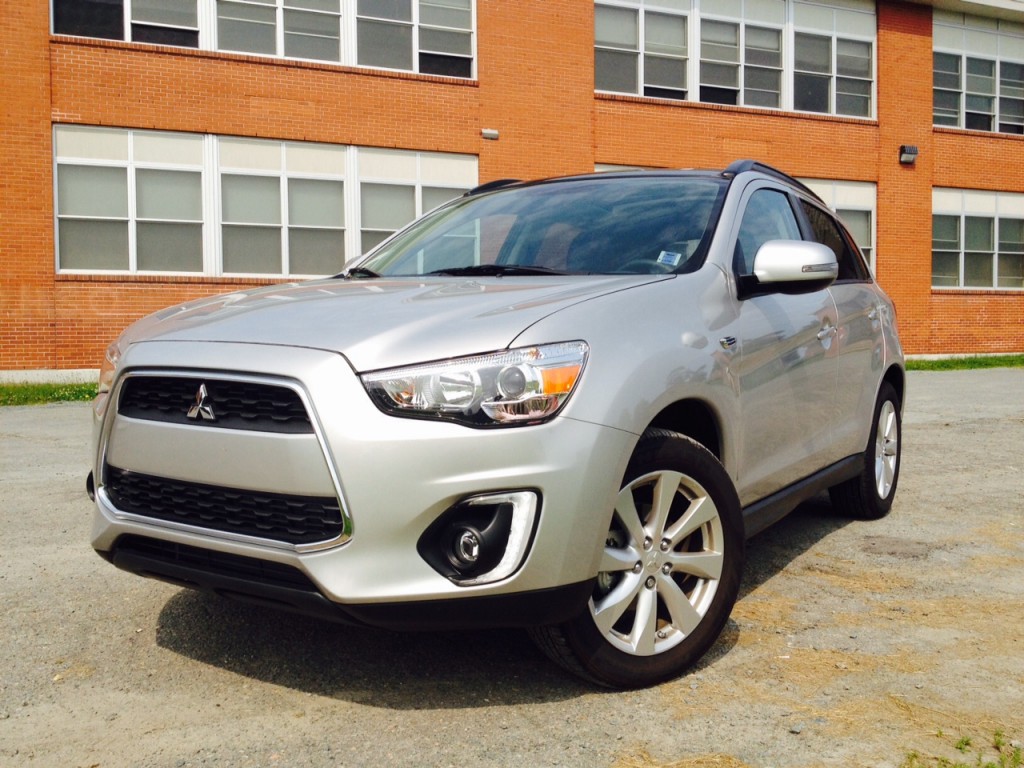 And that’s one of the many things I like about Mitsubishis. I love quirky cars and even though they are small, the RVR still has plenty of quirks to bring a smile to your face. The problem is, its new competition is making massive waves. The CX-3 offers better styling, just as many features, better fuel efficiency, a higher quality interior with a fun-to-drive spirit to boot. Luckily the updates for 2015, even though minor, still keep the RVR relatively competitive for the time being. How long that time will last is anyone’s guess but my suggestion to Mitsubishi is, take note of what the competition is doing and make a redesign happy sooner rather than later.