I am a fan of small Japanese cars that are powered by 4 cylinder engines and use manual transmissions. My very first car was a 1988 Honda Prelude. It was followed by a 1992 Acura Integra and then a 1995 Honda Accord. Presently I own a Mitsubishi Lancer GTS. For a week I have been driving the 2015 Nissan Sentra SV. If your mind works like mine, and if you are a car nut it will, the letters SV will summon the words “Super Veloce”. This expression is of course related to Lamborghini. The Nissan Sentra also uses the letters SV. This confused me as the Sentra is neither sporty nor fast. So what do the letters signify? It took a week but I came to the conclusion that the “S” must stand for space and the “V” must stand for value. 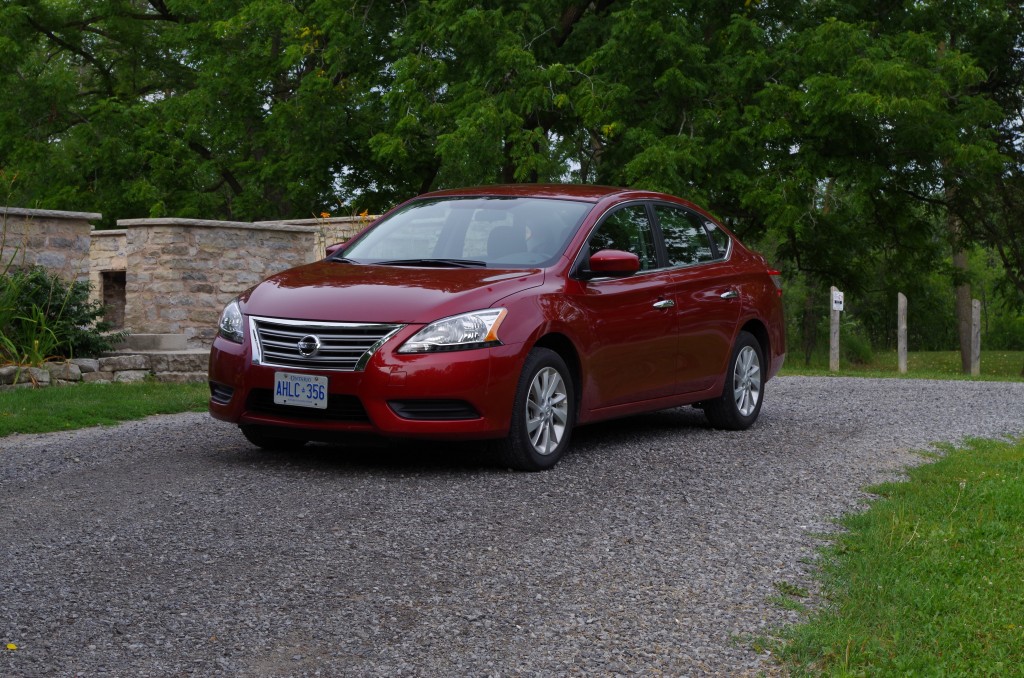 The present version of the Sentra has been around since 2012. At that time Nissan dropped the sporty SE-R model, which had many fans. Instead, they have focused the Sentra on value, economy and roominess. In an attempt to keep the model rolling out of dealerships, the 2015 model has been given some new amenities to make it more attractive to the consumer. The SV model I was given came 16-inch alloy wheels, heated front seats, A/C, a leather-wrapped steering wheel and shift knob, Nissan Intelligent Key with push button start, a back-up camera, NissanConnect with Mobile Apps, a 5.0-inch colour display, SiriusXM Satellite Radio, padded armrests, Bluetooth Streaming Audio, Hands-free Text Messaging Assistant, Smart Auto Headlights and the Easy-Fill Tire Alert system. 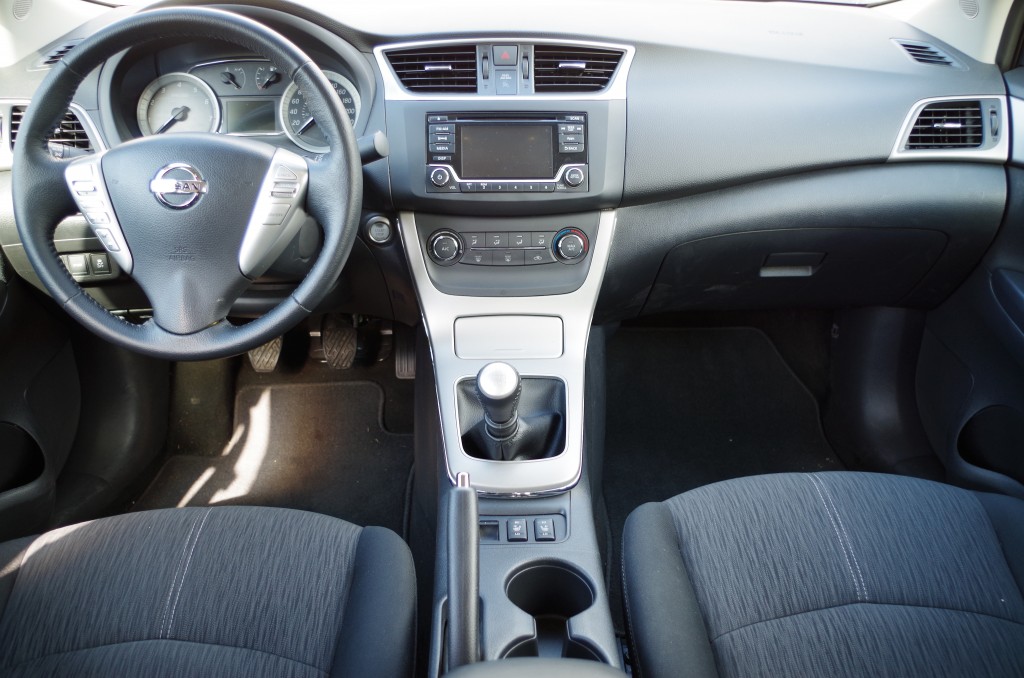 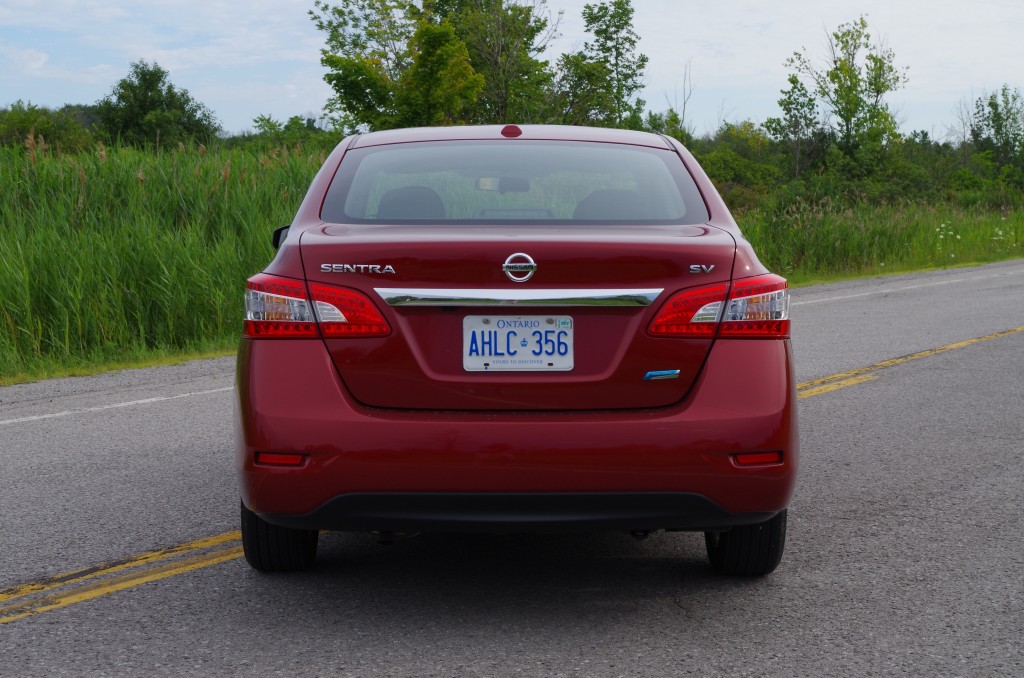 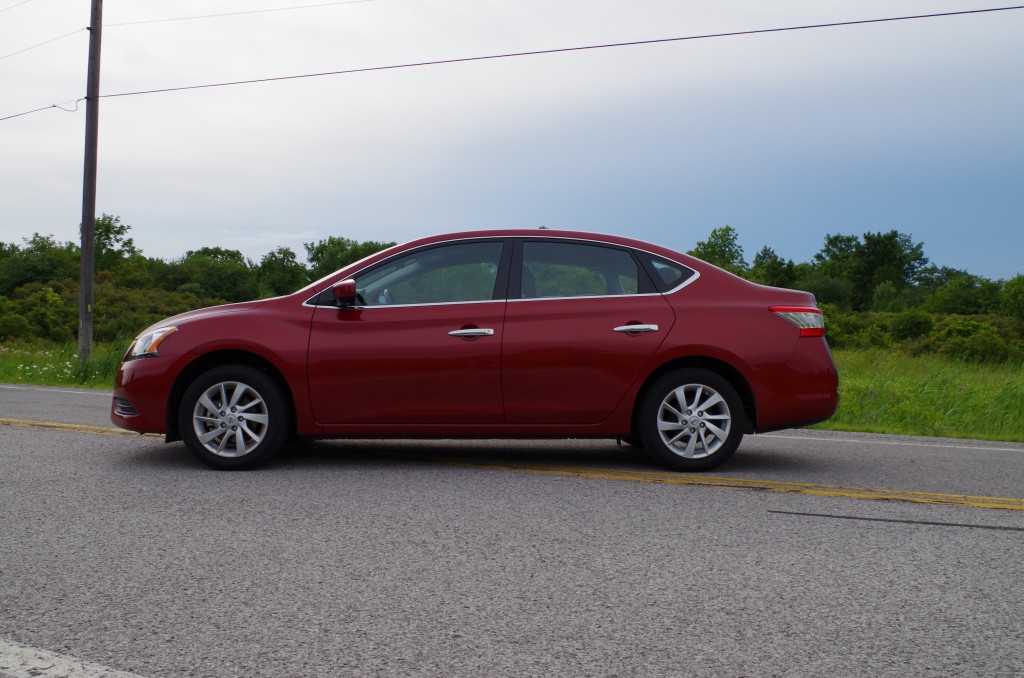 There are also three modes, like most any car these days; Sport, Normal and ECO. The buttons control throttle response and CVT function. In my 6-speed tester only the throttle was affected, and to be honest I left it in normal, as I found it to be the smoothest. This one concession to modernity is the only electronic interference the Sentra SV has, outside of the entertainment system. There is no collision avoidance or curve assistant; nothing will keep you from getting lost and the limited power means you have to rev the engine like a lunatic to get anywhere. But I love that. Perhaps it is just a nostalgic feeling, a remembrance of what it was like driving my first car. The simplicity, the lack of intervention and the basic connection between man and machine; whatever it is the Sentra SV has it. I took a few long drives through twisty back roads and was smiling all the way. The engine is eager but has limited output meaning I could keep it singing without breaking any laws. The economy tires and mellow suspension deliver the sensation of driving at the limit of grip at low speeds. Think of it this way, to get the same sensation in a sporty car, a 370Z, for example, you would need a race track and high speeds. Both of these things are costly (entry fees, premium fuel, performance tires and time). But buy a car that is basic and manual, and the joy of driving is much cheaper. 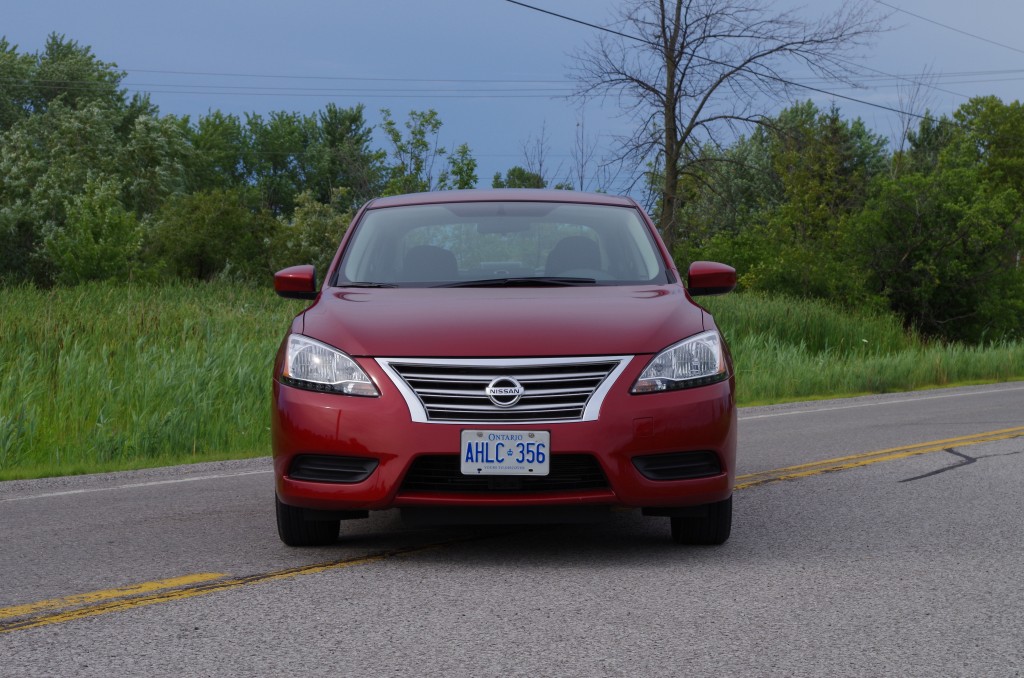 Do not think I am trying to convince you that the Sentra is some sort of dressed down sportster; it isn’t. The handling is relaxed, the suspension is geared toward comfort and the tall tires are more for soaking up bumps than carving corners. The thing is for that brief time out on the open road I was free. Free from electronics, free from the worry of police intervention, free to enjoy the task of driving. It was my Prelude/Integra/and Accord all in one. 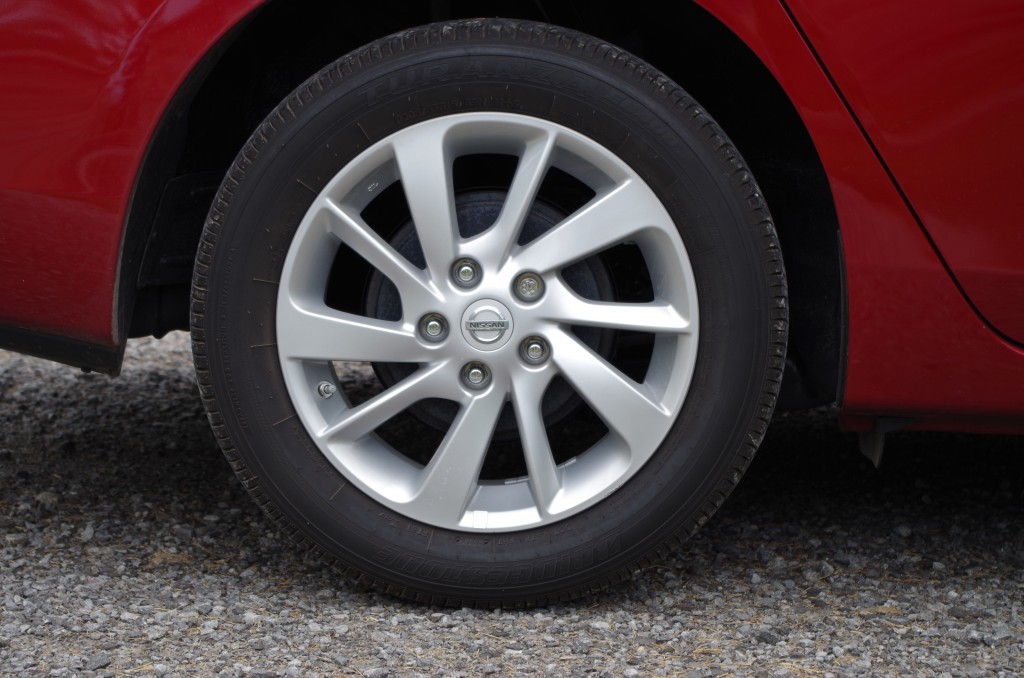 Being an affordable car does have its own drawbacks though. The interior is simple and plain. The manually adjusted seats are not the most supportive, but are comfortable enough for the commute and the dash lacks any kind of elegance. What the Sentra has only what you really need to drive. There are real buttons and knobs control the heating and A/C as well as the radio, which also has touchscreen functions. You are able to plug in your phone or iPod via the USB port tucked away in the small center armrest bin and there are controls in the steering wheel for the stereo, cruise control and Bluetooth systems. The driver’s gauges are plain, but I like thewhite/silver on black. It is easy to read, and minimalist in a good way.

One area the Sentra won me over was interior space. The rear seats have a lot of room, even with the driver’s seat set all the way back I fit nicely, and that almost never happens even in full-size sedans. The trunk is also larger than you may be expecting for a compact car. The trunk provides 427.6L of cargo space, which is expanded by the 60/40 split fold down rear seats. Interior volume is impressive at 3,143L. 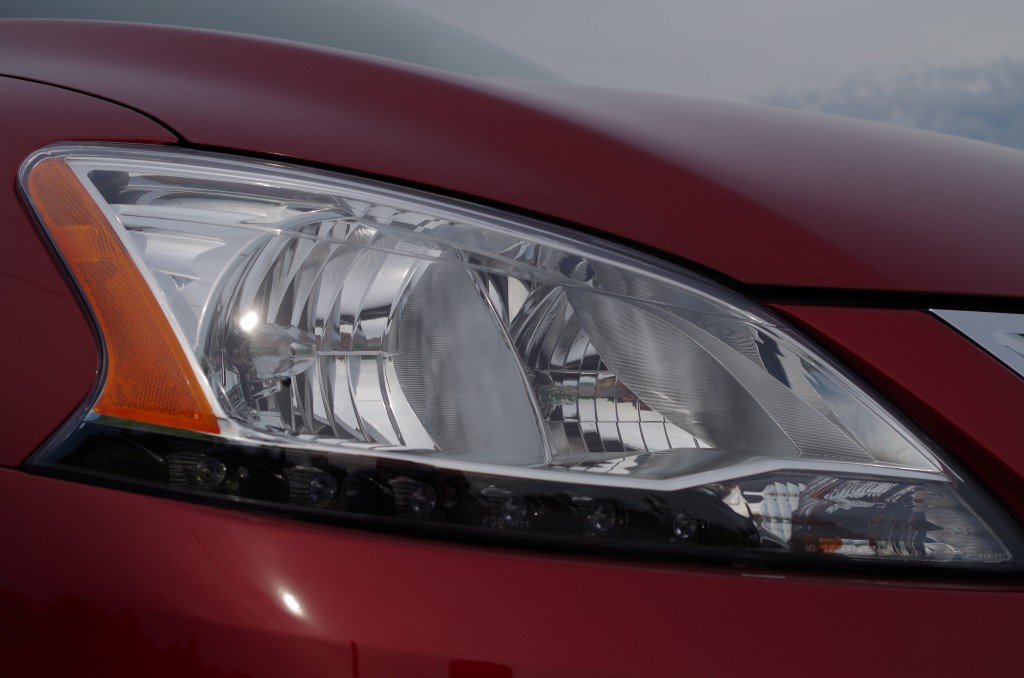 The exterior design looks above the price point. By including the Nissan signature trapezoid-shaped grille and large wraparound headlights with standard LED accents and LED taillights, this economy car has the appearance of a much more costly vehicle. 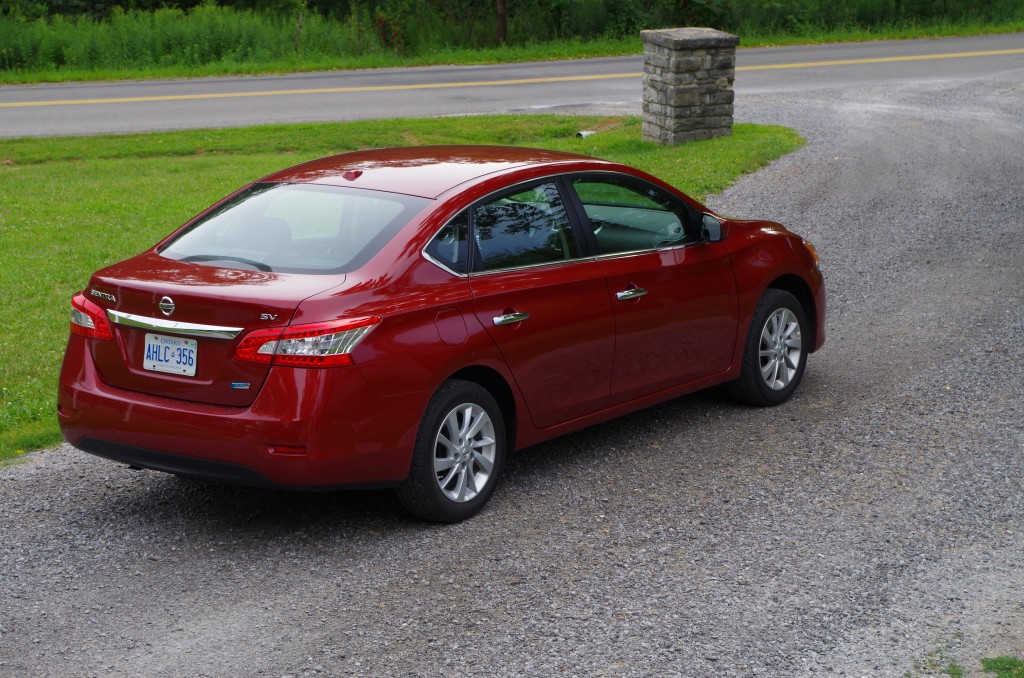 What Nissan has delivered is the perfect commuter vehicle. The frugal engine will keep costs down. The sharp exterior design is mature and classy. The simple straight forward interior has more than enough space for the day to day grind and will be a cinch to tidy up should you spill your coffee (and no I did not spill my coffee). The Nissan Sentra delivers all the simple joys we experienced years ago, but with the added benefits of fuel economy and reliability.