You can’t get the new Corolla in beige. Shocked? You probably shouldn’t be. Even though the Corolla does just fine in terms of sales, it isn’t exactly what you’d call an interesting car. Which is funny because there isn’t anything necessarily wrong with it.

You see, other cars are either good or bad for certain reasons but the Corolla has always been a car that didn’t fall into either category in my eyes. It just existed. Sure you could criticize the styling and the ancient automatic transmission, but then you’d have to compliment it with “but it’s really good on gas and nothing will go wrong with it”.

And that’s the thing. Anything that can’t be criticized about the Corolla is boring stuff. Fuel efficiency and reliability? Yawn. Nowadays the Mazda3 and Kia Forte can do that all while being far more interesting.

So even though Toyota could have literally kept the previous generation Corolla going for another 5 years with little decline in sales, they must have been tired of the rep the Corolla has. No one wants to sell anything boring.

So here we have what Toyota hopes will crush any comparisons to an appliance; the 2014 Corolla. 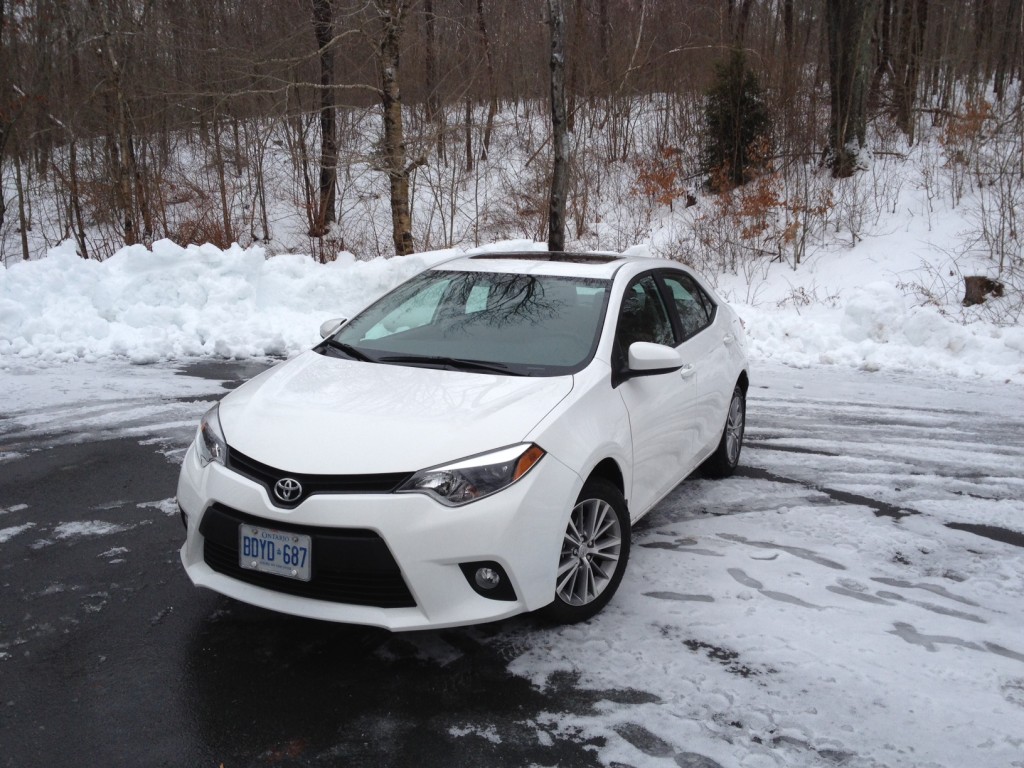 The biggest and most obvious change is the exterior an aggressive front looking fascia featuring LED headlights, and a sporty looking grille. If you opt for the S model you’ll get an even more aggressive look with a rear spoiler, side skirts and 17 inch wheels. My tester was the LE model so it did not have these add ons, but to be honest the Corolla looks damn good anyway, especially with my tester’s upgrade packages which, among other things, gave it 16 inch alloys. It’s safe to say this is the least boring Corolla we’ve seen in the past few decades. In fact, Toyota probably could have slapped a Scion badge on it and no one would know the difference. 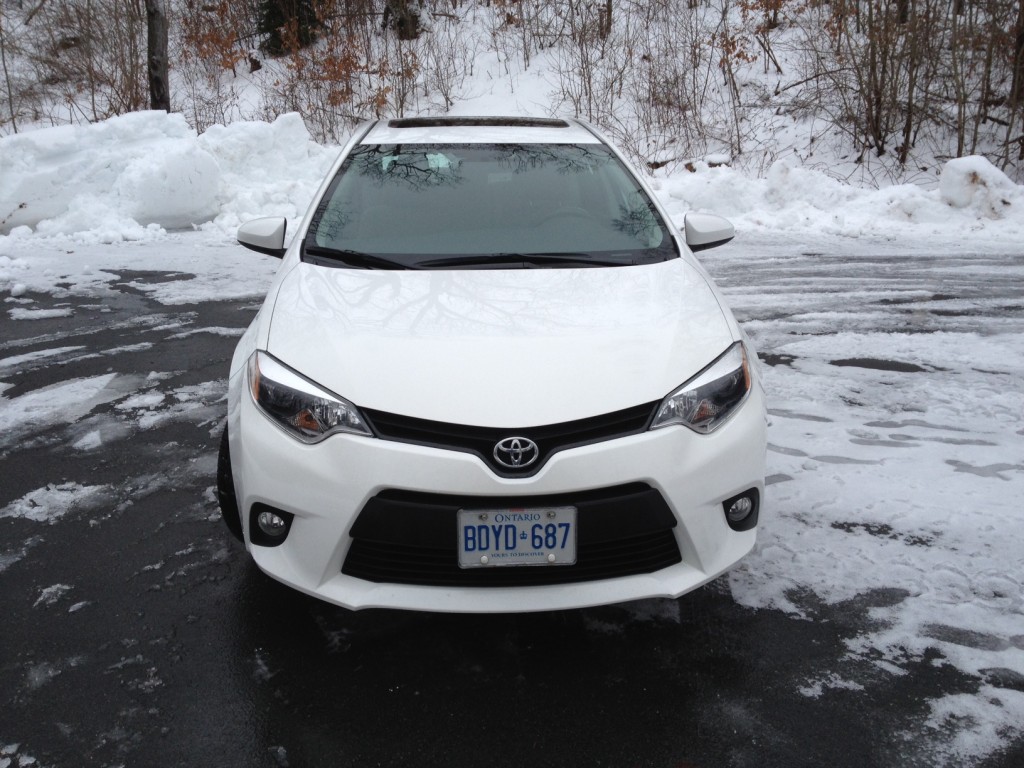 Inside has to be among the least boring Corolla interiors in a while too. There is a blend of different textures and colours include a very unconservative blue strip on the doors. The centre stack looks good although the buttons are a bit small on the LCD centre screen as is the font but most should be able to do just fine. 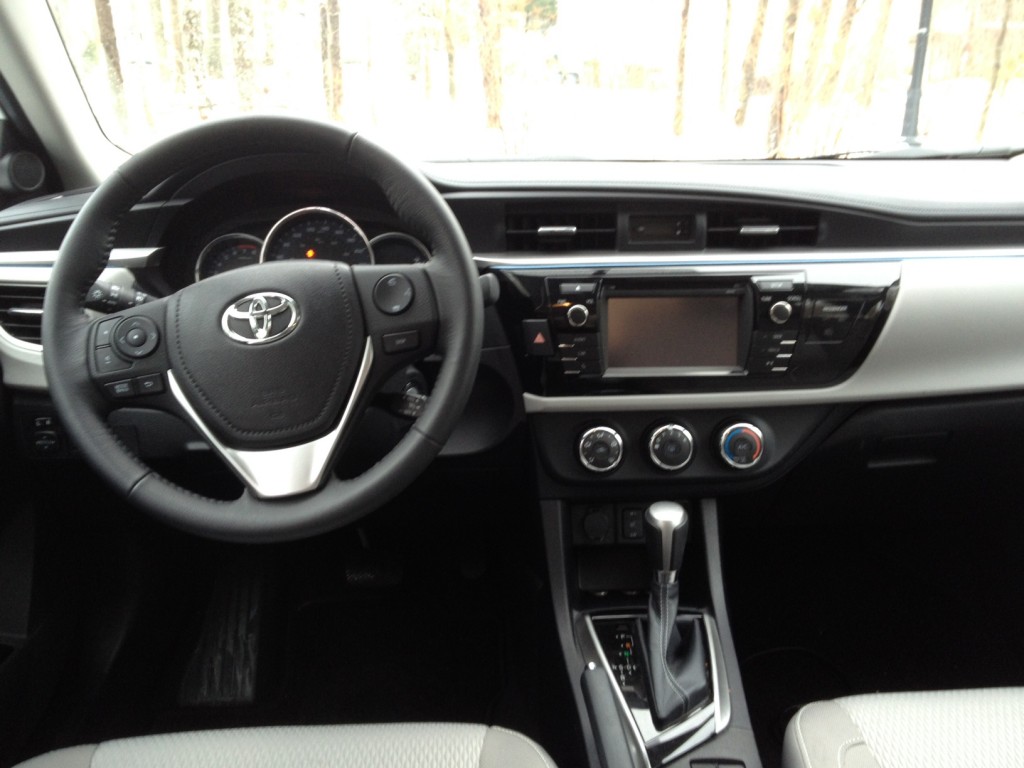 The seats are decently comfortable and the heated seats actually do quite well in not burning your bottom after five minutes. I found the rear seating to be reasonable as well with decent leg, head and shoulder room although the latter is likely going to be a bit tight for the sucker who has to sit in the middle seat. Trunk space is good too with about 369 litres of cargo room. The rear seats fold for additional storage, but they do not fold completely flat. 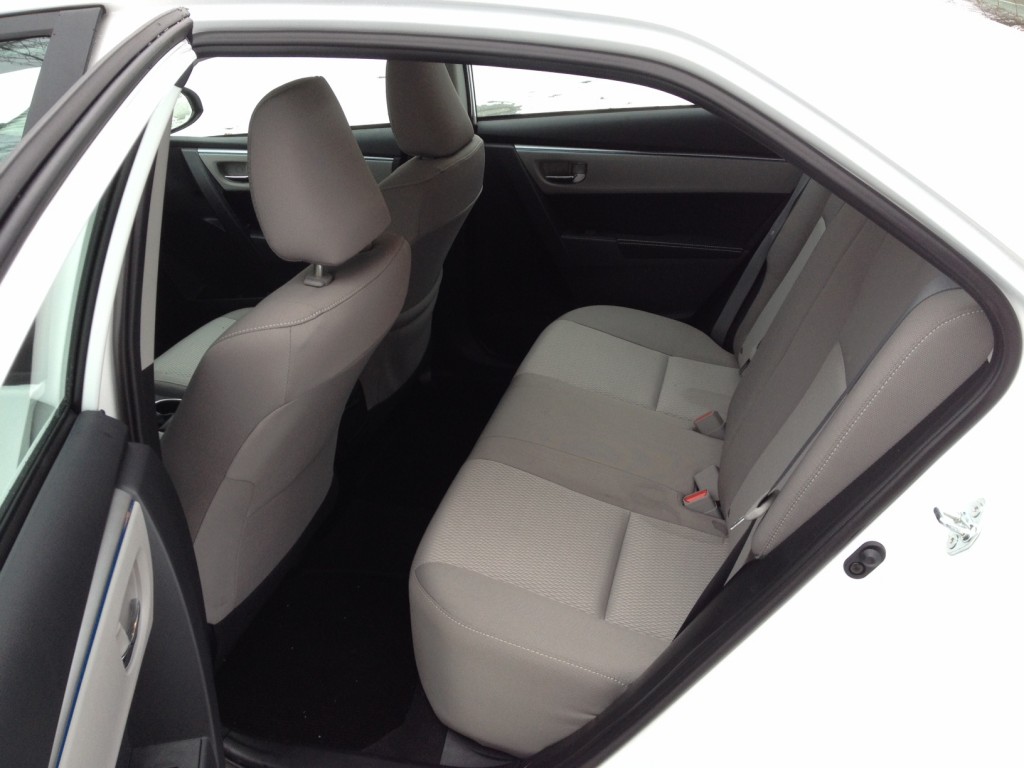 Under the hood you’ll find a 1.8 litre 4 cylinder. Sound familiar? Well that’s because it’s one of the few things Toyota kept from the old Corolla. It makes 132 horsepower and 124 pound foot torque which, to be honest, it decently adequate. It certainly isn’t fast but it’ll get the job done, even when mated to the optional CVT transmission. Yes, new for 2014 is a CVT. And guess what. It isn’t terribly annoying! It doesn’t seem to try to hold the engine back for the sake of fuel efficiency and it isn’t terribly noisy either. But guess what else. The 4-speed automatic is still available. Now I’m actually not sure which to go for here (aside from the obvious choice of a manual transmission). The 4-speed model is ancient but at least it’s a bit less noisy, somehow decently efficient and has proven itself to be durable. The CVT nets to a few extra kilometers, isn’t nearly as unrefined as other CVT’s but it’s still a CVT which means lots of droany, fun-impeding driving. I’m going to say to check off the CVT because despite the sporty looks, this is not a sport car anyway, so might as well get some extra bang for your buck out of that gas tank. Besides, if you really want it to, it will simulate gear shifts for you in manual mode. 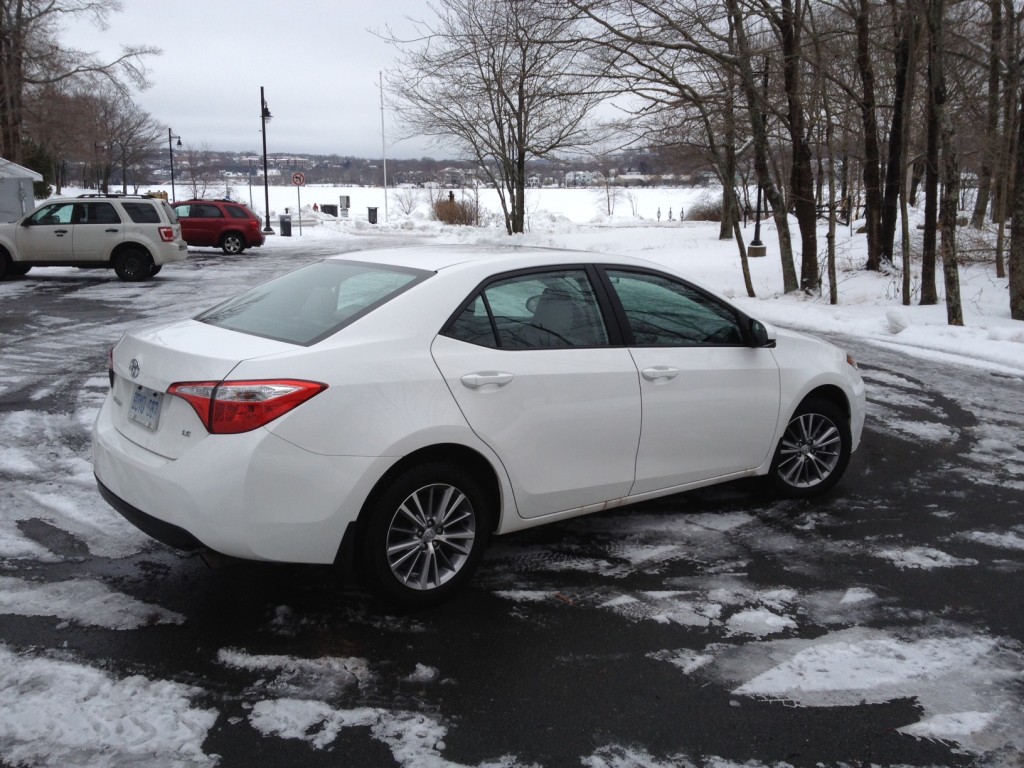 Around town the Corolla does quite well at absorbing bumps and potholes. Unlike the hollow feeling you get from a Hyundai Elantra, the Corolla feels more refined around town. There was something odd that I noticed in the steering though. When at speed the steering is as numb as can be as you’d expect from a Corolla, but when you slow down to take a corner it appears to firm up. This is odd because usually on most cars these days it’s the opposite – the steering will actually become lighter at lower speeds to help ease maneuverability. And it doesn’t translate to better feedback to the driver either it just, for seemingly no reason, becomes firmer. 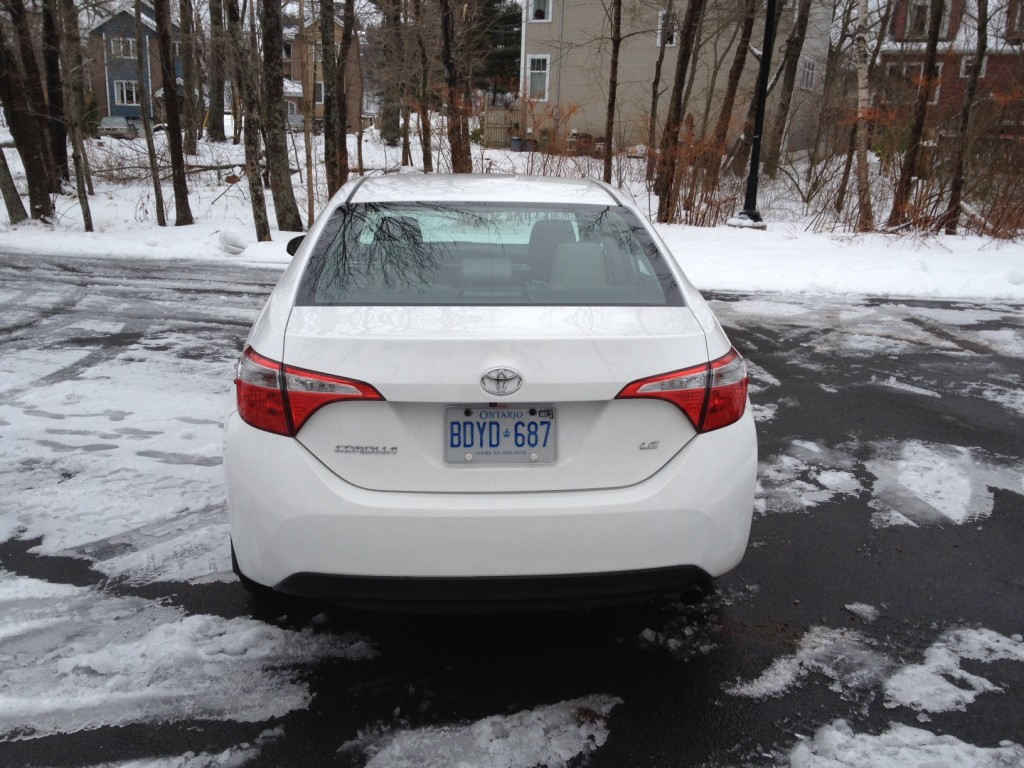 In terms of fuel consumption, the Corolla is rated at 6.9 L/100 kms in the city and 5.9 L/100 kms on the highway. In mixed driving I was able to return 8.0 L/100 kms but keep in mind we had very frigid temperatures during my week with it, so I’d wager in warmer temperatures you’d likely be able to hit close to those numbers. 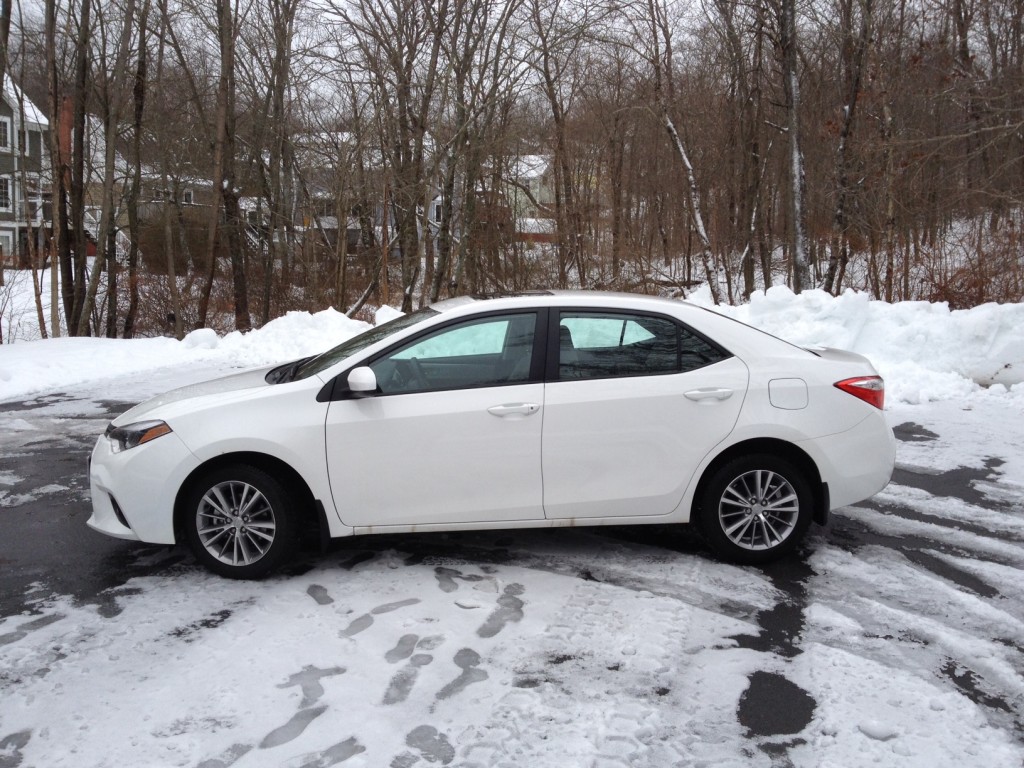 The Corolla is obviously improved but it doesn’t lose the things that make it appealing for uninteresting people in the first place. It still has a boring but capable engine, good fuel efficiency and should get you through a few years trouble free. Only now it adds style and presence. But what’s more, I’m starting to actually ‘get’ this car. Most people aren’t like me – in other words, most people are sensible with their car purchases. That’s why the Corolla does so well. And it isn’t so much that these sorts of people are boring, they just tend to put boring above exciting because it makes sense when you’re talking car ownership. I think Toyota has realized this as well. Even though the Corolla pretty much drives the way the old one did, they’ve realized that people will absolutely accept the addition of radical chances so long as it won’t cost them in the long run. That’s why we now have a radical looking (for a Corolla anyway) new design for both the interior and exterior. 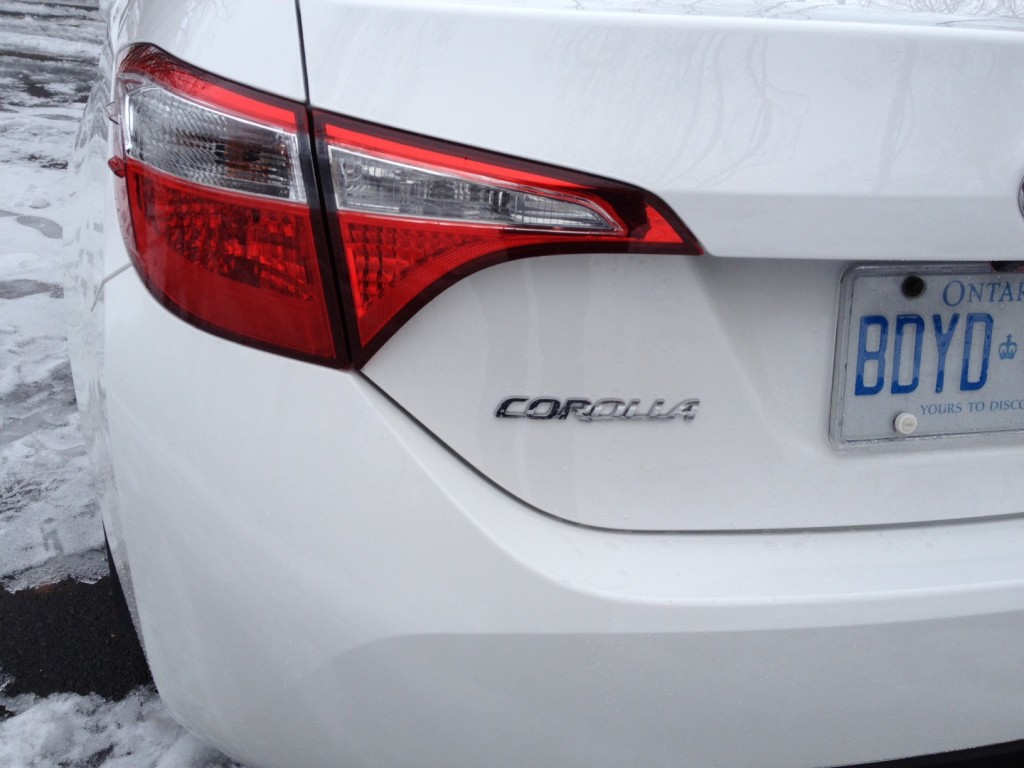