The truck market these days sure is a lot different than it was as little as a decade ago. Now a days, the pick-up have transformed into more than just work duty only vehicles.

While I personally don’t feel the need to own a pick-up, I do still like them. And despite that I’ve always wondered why people buy them. I would guess that around 75% of pick-ups rarely see heavy lifting of towing duties, or sometimes not even at all. There is an appeal beyond their original intention.

That’s why these days you see crew cabs more so than ever, it’s why leather seats are being offered along with sun roofs,  navigation, plenty of tech, LED lighting and so much more.

GM is the latest to reinvent their pick-up twins with the all-new Chevrolet Silverado and GMC Sierra. And yes, they have adapted their trucks with everything I just mentioned and more.

Is it still a big contender amongst the big-three? 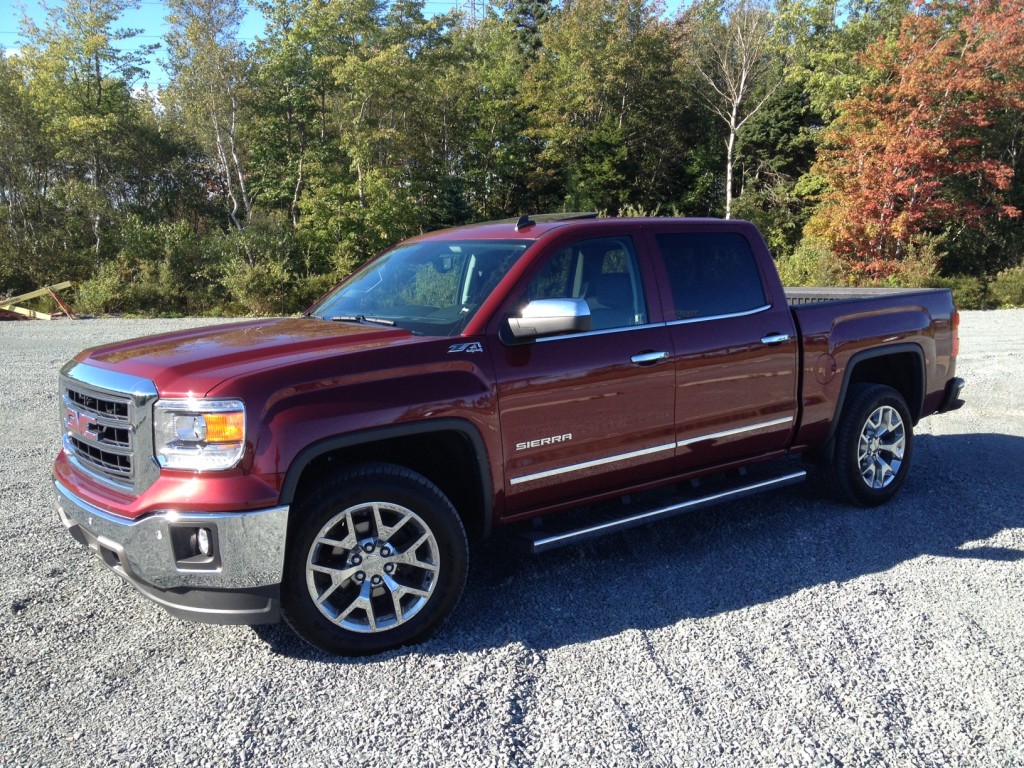 For visual upgrades, you could be forgiven for not immediately noticing them. When GM released official images they were criticized for not going far enough with the design. While I do see their point, I will say that there is only so much you can do with the design of a pick -up truck. The GM pick-up twins do look quite similar to last year’s models but look closely and you’ll be able to differentiate the new Sierra from the last generation by the projector-style headlights, LED running lights and tail lights that look like they were stolen from the previous generation Silverado. Other clues are updated chrome wheels, a massive chrome bar on top of the reworked grille and side steps incorporated into the rear bumper. The look works and it works well. 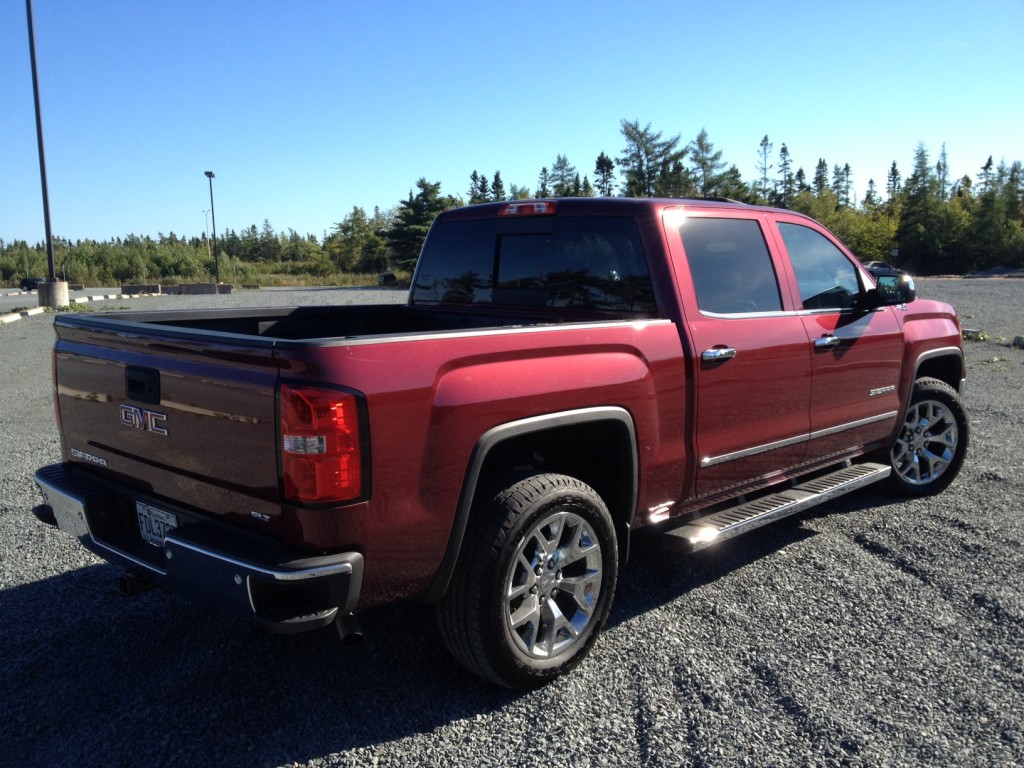 Happily, GM has addressed the interior as well. The old interior was quite dated with old-style GM gauges, layout and quality. This time around GM has made a noticeable improvement with lots of higher quality feeling materials, tech and a modernized design. As with most half tonne trucks, interior room is never an issue and this remains true for the Sierra. It’s spacious all around and thanks to the step bar, it’s relatively easy to get in and out of. Which is just as well because, as I alluded to above, pick-up trucks at not what they used to be. Now, trucks double as family haulers. With that in mind, it would perhaps be difficult for a young child or the elderly to get in and out of, despite the step bar, but this is just one of the few things most crew-cabs can’t do that family cars can. 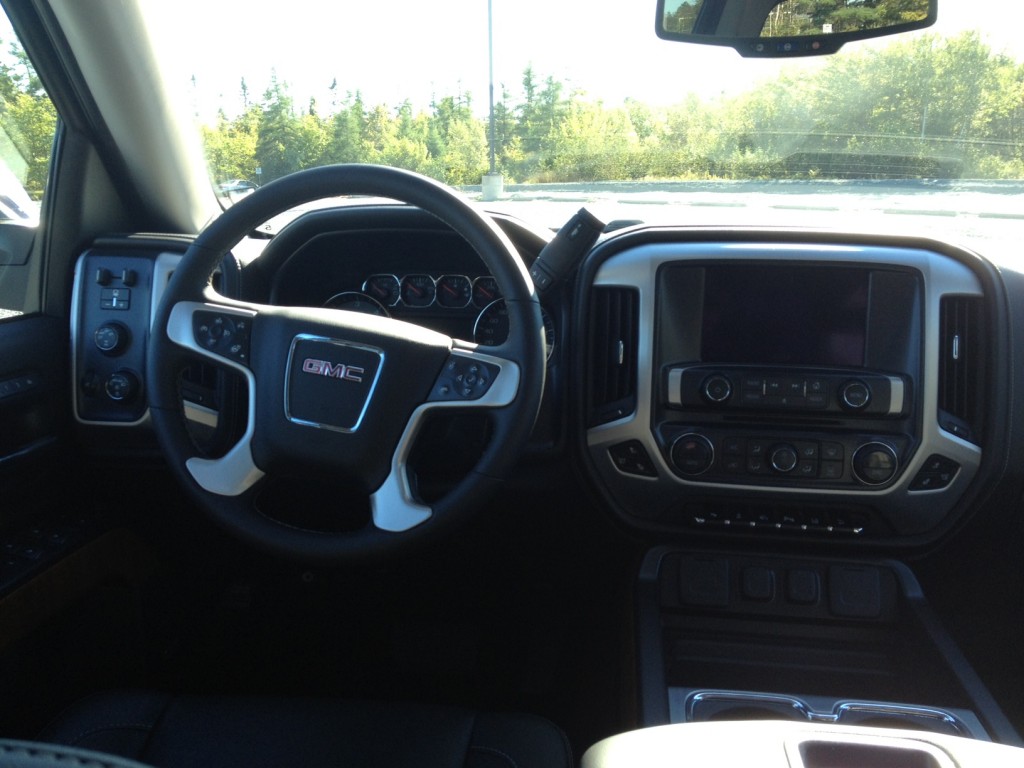 Cargo capacity is good despite the crew cab design cutting into what would otherwise be a large bed. However it was still good enough to haul some plywood for my brother-in-law –although we had to keep the tail gate down to have it fit. That’s when we realized that reversing the Sierra had to be done the old fashioned way instead of relying on the crisp looking images that the back-up camera provides. Outward visibility is not an issue though thanks to large open surroundings and large side mirrors. 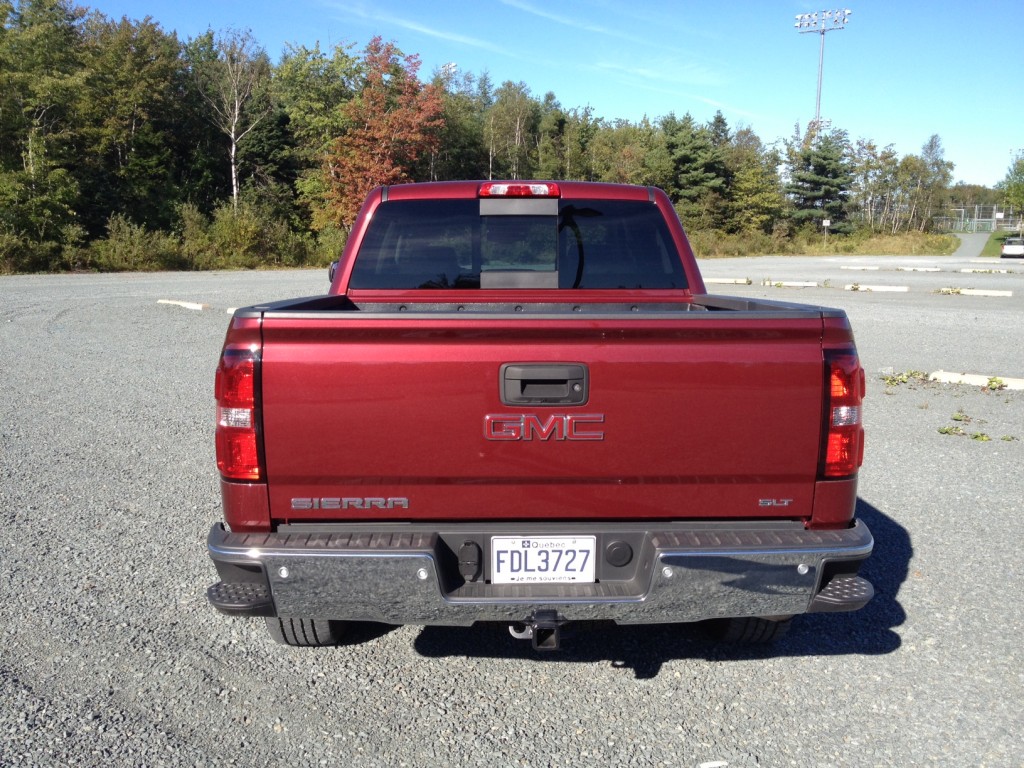 This iteration of the Sierra is powered by a 5.3 litre V8 making 355 horsepower and 383 pound foot torque. This is adequate juice to be sure, but don’t expect to be blown away by the acceleration. Part of the reason could be due to the six-speed automatic which shifts somewhat abruptly and at inopportune times.  However, it must be said that it’s likely that most won’t notice this as that kind of behavior from a truck transmission is quite typical. In fact, the only reason why I noticed was because the 8-speed automatic fitted to the Ram 1500 set the bar high from the get-go. 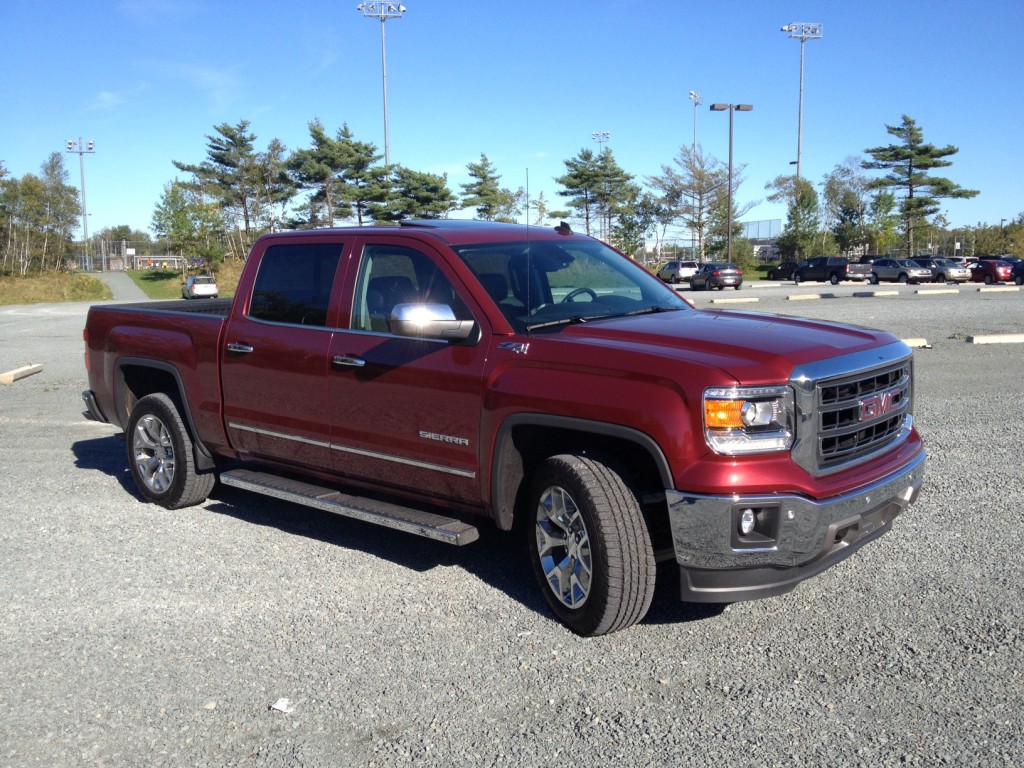 One advantage that the Sierra has over the Ram is interior cabin quietness. Holy moly. Its Buick-like quiet inside.  This adds to the level of luxury feel which in part helps to justify the Sierra’s as tested $58K price tag. But that’s not all. 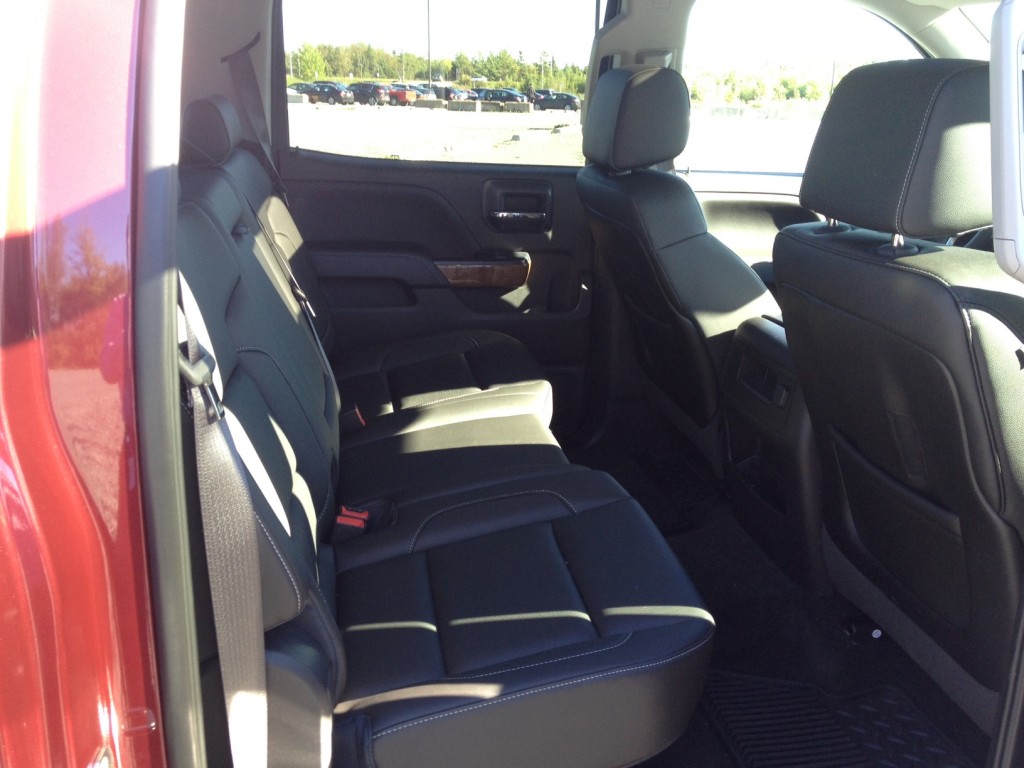 The suspension is quite comfortable too as it absorbs all the potholes and bumps in the road effortlessly. Check another one off for doubling as a daily driver. However that cushy suspension means that you really need to rein the Sierra in when taking a corner. I wasn’t expecting BMW-like handling, but I found that I had to take extra care and slow down a little bit more when taking a corner than in other pick-ups I’ve experienced. This is not necessarily a bad thing, just something to keep in mind while driving. Otherwise you’ll end up with obvious body roll or even some audible complaints from the tires. In terms of off-road capability – the Sierra is, as you’d expect, quite capable. I didn’t spend too much time off-road with it because I know that most will be using this truck as a family car and likely will never take it off road (who wants to scrape those attractive rims anyway) but I did get one opportunity and I couldn’t find too much wrong with the way the it tackles off-road. In fact, the interior quietness is still there even when off-roading which is a huge plus. 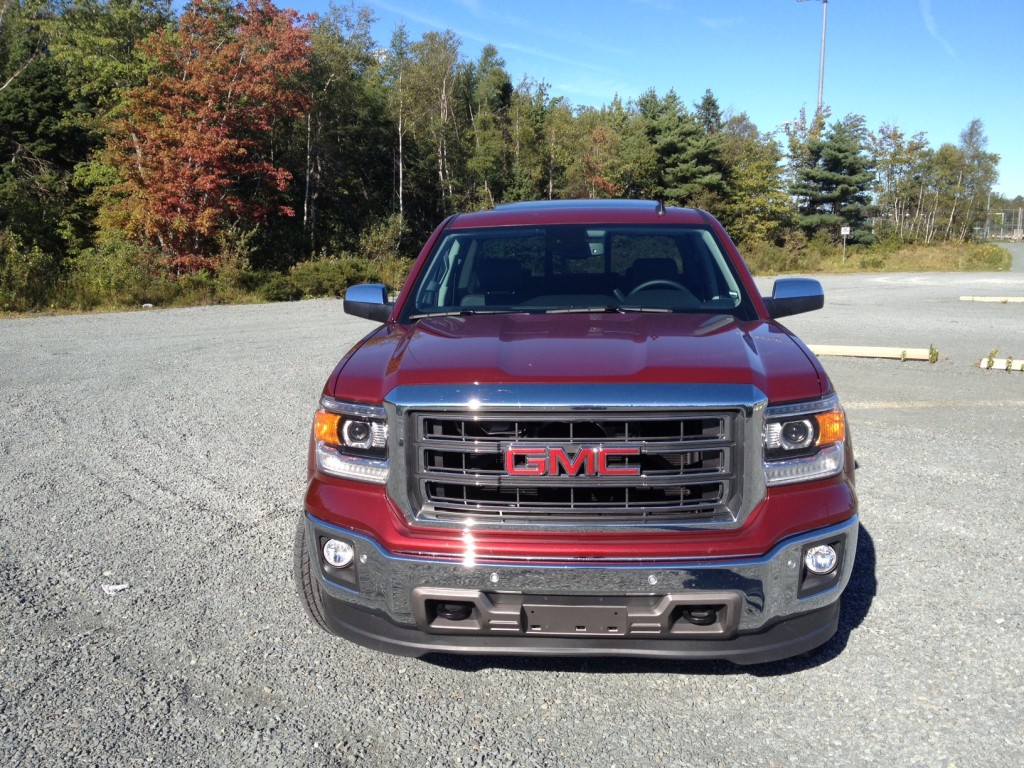 In terms of fuel efficiency, you’ll be pleasantly surprised. The Sierra is rated at 14.7 L/100 kms city and 10.7 Highway. I averaged about 14.0 L/100 kms in mostly city driving which, for a fairly large luxury vehicle equipped with a V8 is fairly good. I’m pleased to see GM vehicles returning decent real world fuel mileage as this was something they were once known for –perhaps more so than Toyota or any other nameplate. 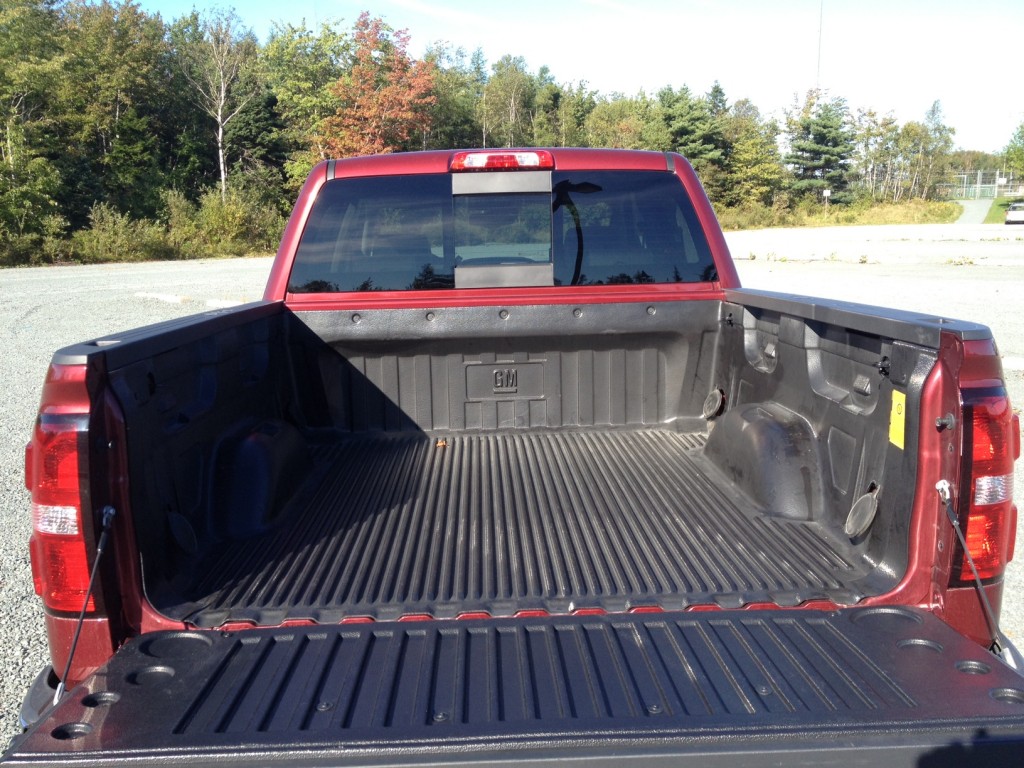 Faults? I couldn’t find much. Other than the fact that the styling isn’t enough of a departure, the handling isn’t the best and the transmission is bested by Chrysler’s 8-speed, that’s about it. I suppose if I were plunking down $60K I’d appreciate push-start and keyless entry. And probably xenon headlights. But those are minor things. Truthfully the Sierra has proven that it’s still one of the top three in the pick-up segment. But that presents a bit of a problem. 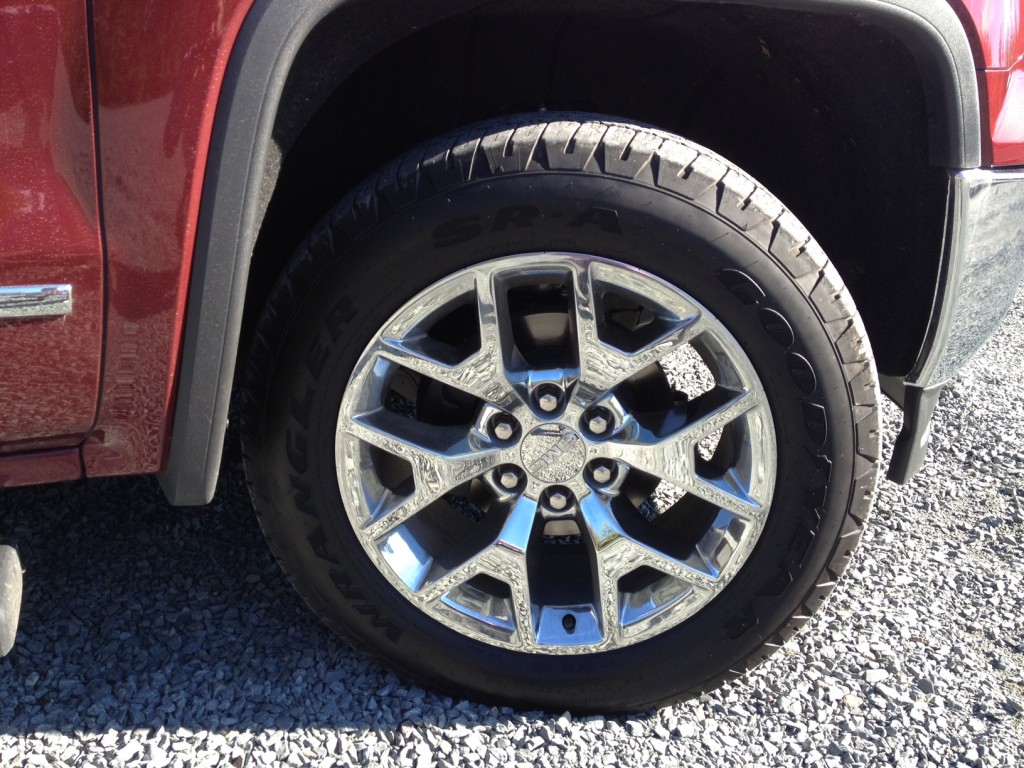 You see, the offerings from the other two out of the top three are quite good too. Ford’s ecoboost tech is excellent, and the Ram’s 8-speed auto combined with the Rambox makes it innovative. If you were to go innie minnie miny moe you’d end up with a winner. But GM shouldn’t be content to keep its top three status, it should aim to be the clear winner. And right now it still isn’t clear in this segment who is offers the number one pick-up truck. But the fact remains – if you choose the Sierra, you won’t be disappointed.