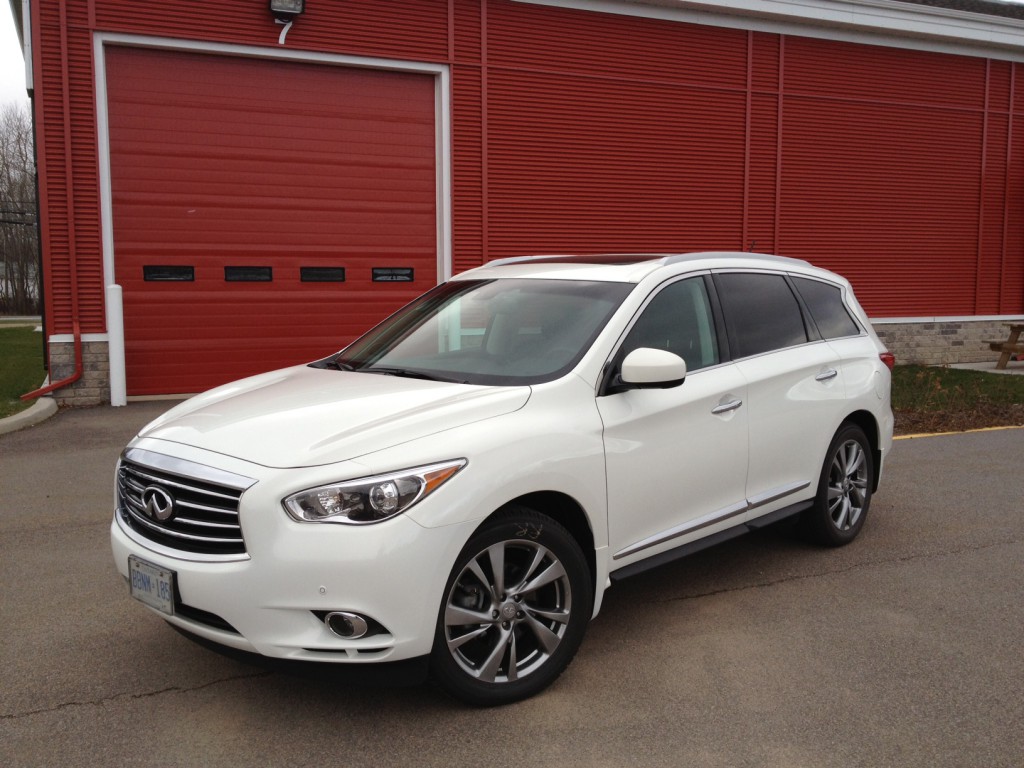 It’s funny how quickly trends can sweep the world in a relatively short time span. For instance, whoever would have thought that Gangnam style would be the source of embarrassment for politicians and nine year olds all over the world? Watching adults attempt the rather basic dance routine is about as cringe-worthy as watching Prime Minister Harper present Justin Bieber with a diamond jubilee medal.

Still, for nine year olds the Gangnam style dance is the coolest thing to come along since Spongebob Squarepants –and believe me I’m not judging because Gangam style is equivalent to my generation’s obsession with the Macarena.

I was at a local hockey game the other day and in between periods, young children were encouraged to get up and do their ‘best’ gangnam style impression for their chance to win free subs from Subway.  And who could blame them. Free food is the way to any child’s heart –and subsequently their parents’ pocketbooks. In fact, anything that young children like or latch onto is big business. If you’re a business, the key is to get nine your olds to like or obsess about it to the point where mom and dad will buy into it just to shut them up.

You wouldn’t think that children could have such influence on an industry as big as the car industry, but you’re wrong. Getting children to like your product at a young age ensures loyalty and obsession until they reach the age that they can drive and afford it. How many of us as young boys or girls had model cars to play with? I still want a Lamborghini Diablo, for instance.

But if it’s trendy, automakers take notice. During the SUV craze of the 90’s Volvo insisted they would never hop aboard that bandwagon because it didn’t fit with the then mandate of the Swedish company: safety. Today, Volvo’s two best-selling models are SUV’s.  BMW also declared a similar promise stating that SUV’s didn’t work well with its mantra of well-balanced handling, but the X5 pretty much started the luxury ‘ute segment and is one of the most recognizable vehicles on the road today.

In the same regard, Infiniti was missing out in a trendy segment, mostly designed for younger children and growing families –the luxury crossover. Now we have their first offering in the form of the JX35. And you might as well forget that name right now because as of 2014, it will called the QX60 to keep in line with a new corporate name scheme. However, the product itself will largely stay the same.

Will Infiniti hit gangnam style levels of success with their first dabble into the segment? 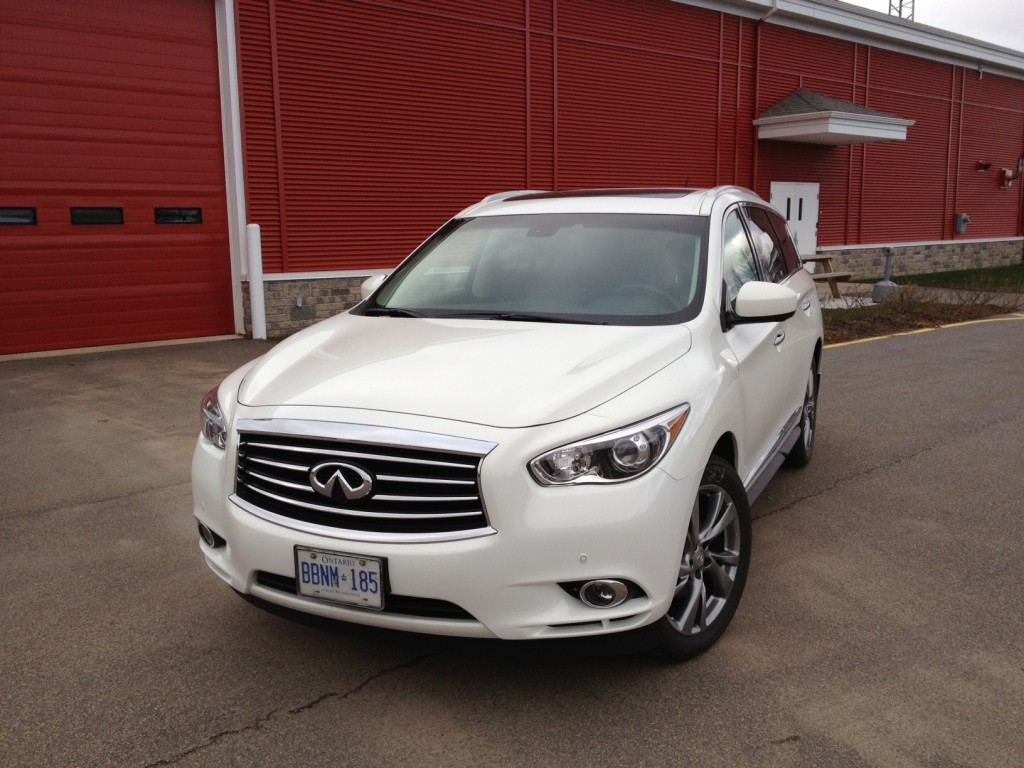 When Infiniti first debuted the JX, I was a fan of the styling saying it “successfully blends in the Infiniti corporate look, all while retaining its own individuality”. After seeing it in person, I would still be inclined to agree with my assessment made a year ago, but it seemed as though I was the only one. My best friend flat-out said “I don’t like it” and fellow auto journos seemed turned off by the “oddly shaped rear quarter window” and the “skinny tail lights” matched with “homely looking wheels”. I don’t see what any of them are on about, the JX looks classy and sleek to my eye, but to each their own. 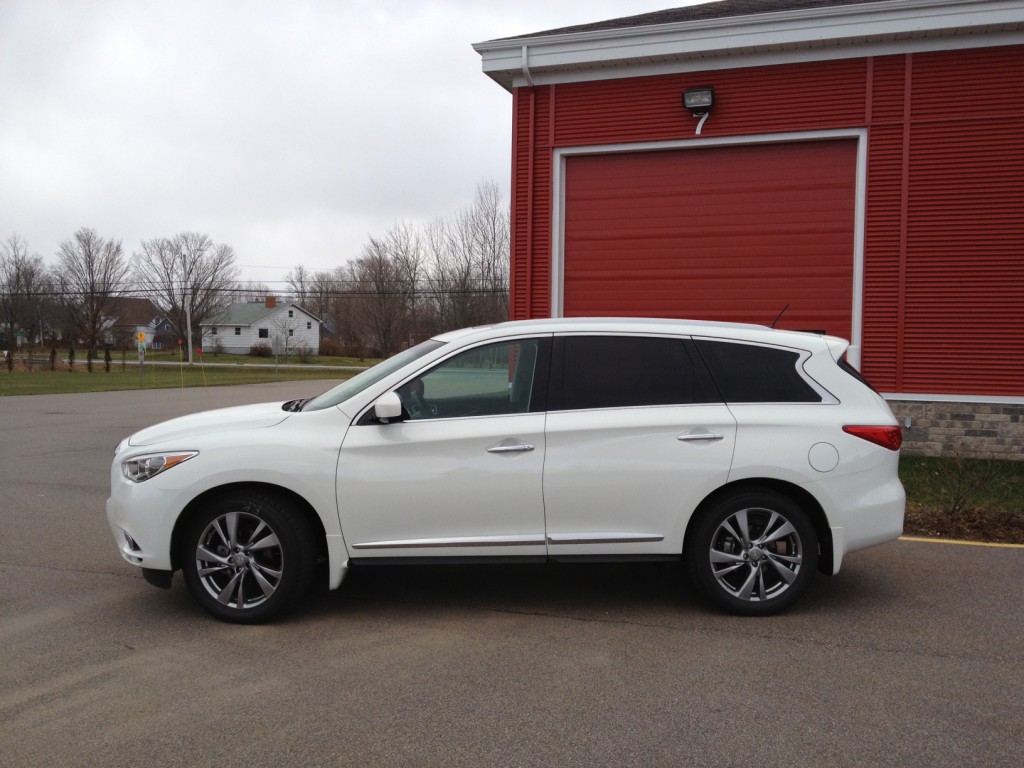 Inside, most would agree, is a very nice place to be. The design flows well, however at first the magnitude of buttons can be a bit overwhelming. Once you get familiar with the cabin, it becomes easy to get used to. The instrument panel is clear as is the display screen which, among other things, controls the excellent sounding stereo system. One of my all-time favourite features on the JX is the heated steering wheel. It not only heated up quickly but also to an ideal temperature each time. My only complaint is that you need to turn the heated steering wheel feature on each time you start the JX, unlike in the much cheaper Hyundai Santa Fe where the feature stays on until you turn it off regardless of how often you stop and start the vehicle. On top of that the button for the heated steering wheel is under the wheel and it is a bit hard to reach. 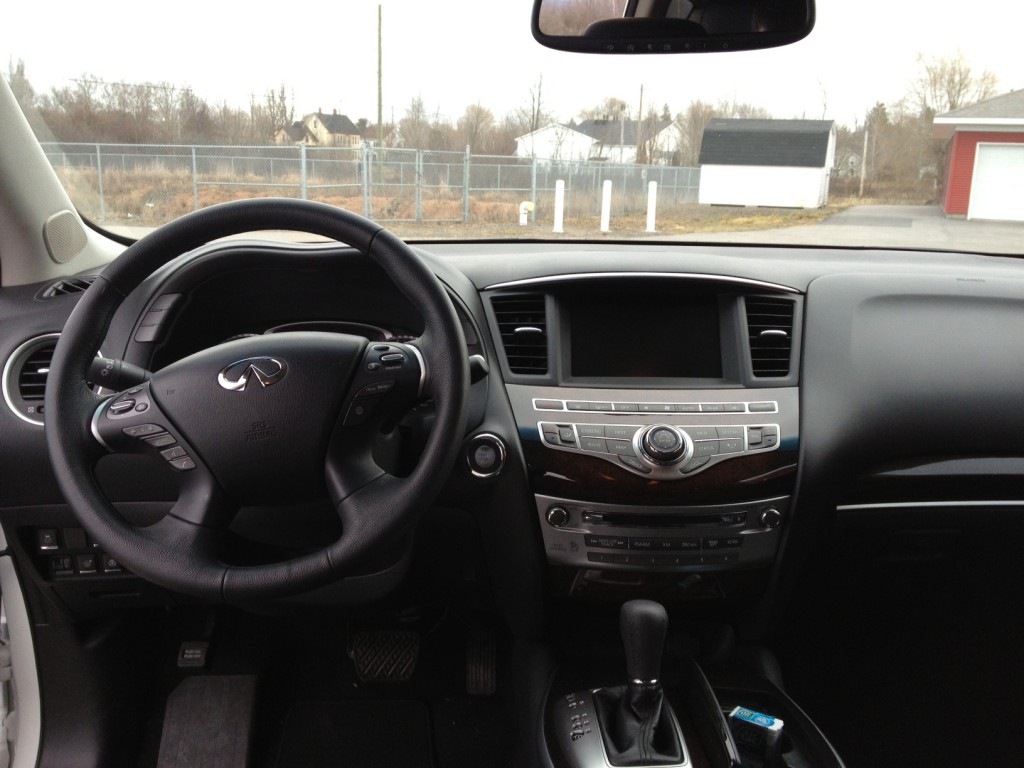 Rear seat passenger room for the second row is good as is head and shoulder room. The seats are as comfortable as the front buckets to boot. There are screens on the back of the headrests to keep younger passengers occupied for longer trips as well. My tester also came with a child seat in the second row to demonstrate that access to the third row can still be done quite effortlessly without taking out the child seat altogether. 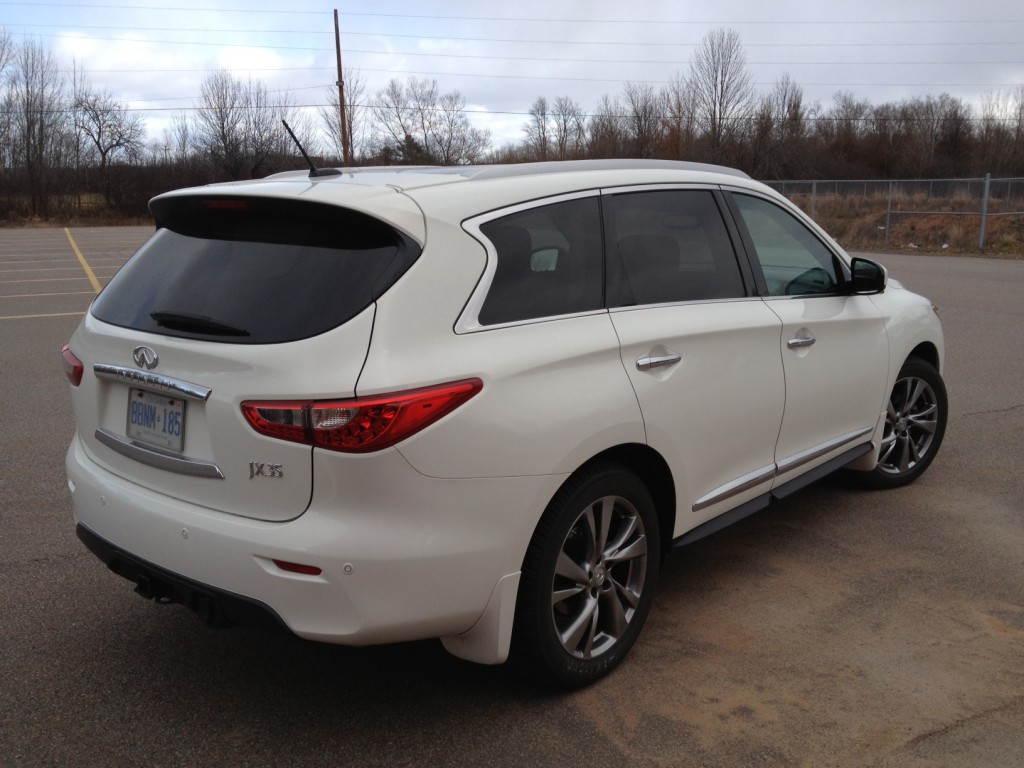 In fact, child seat or not, access to the third row is quite easy. The second row seats can flip for entry or can fold down to carry larger items. All this is done with the pull of a lever and the whole process is quite effortless. Entry and egress is quite easy too as my pregnant sister was able to get in and out easily and found head and legroom to be quite good, albeit her small frame and stature probably helped, but I can also personally attest to adequate room for those of us who are 6 feet or taller. 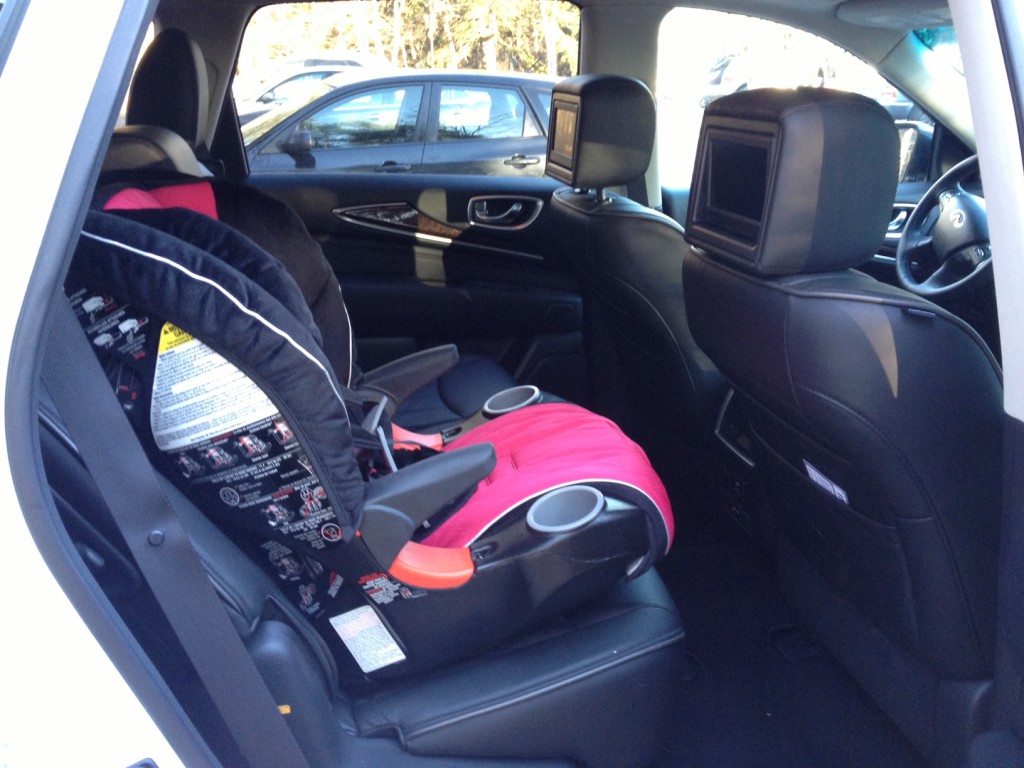 With all the seats folded down there is an ample load area. In fact, I was able to haul my brother in law’s new miter saw and stand with room to spare and while still keeping some of the second row seats up. With all the rear seats up, there is still adequate amount of space and I didn’t find the JX’s swoopy roof line to impede taller objects too much. 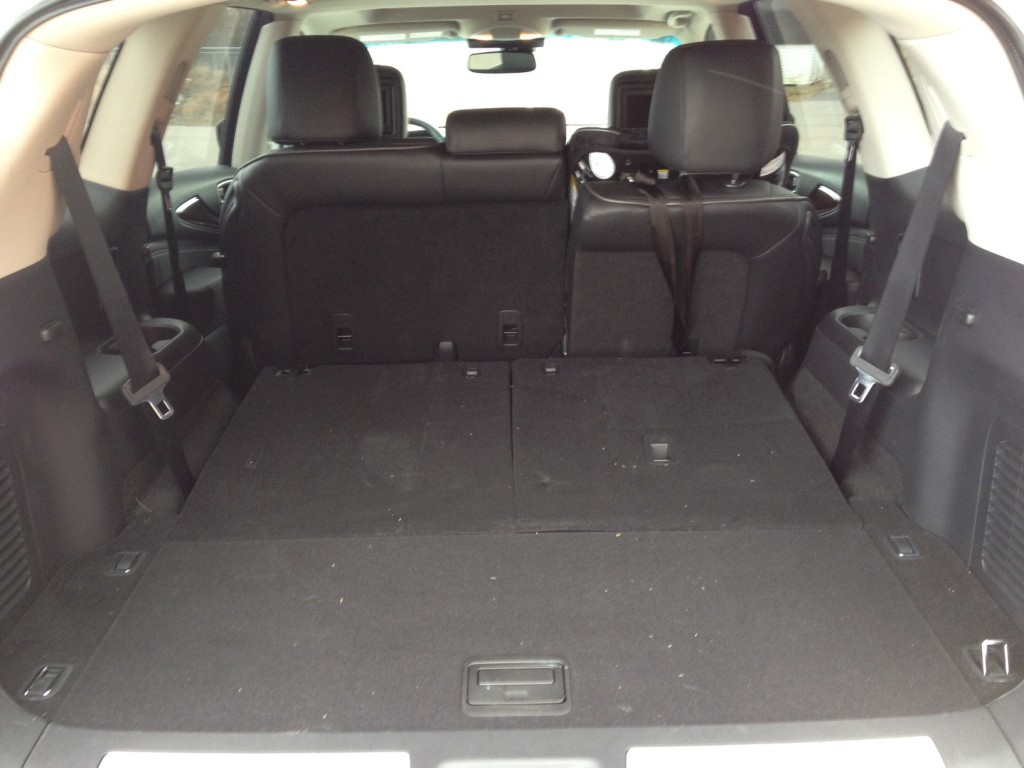 As you can imagine, the JX is a sizable vehicle which could theoretically make it difficult to park, although I did not find it difficult personally. Still, for those who do, the JX comes with not only a fairly clear back up camera, but an all-around 360 degree areal type view making the JX about as easy to park as a Mini Cooper. This is one of the best back-up systems I’ve ever tested and is likely very much welcome to nervous parkers everywhere. As if that wasn’t enough, the JX also has a feature called Backup Collision Intervention (BCI) which, as the name suggests, will intervene if there is an object or human being behind you and if it doesn’t look like you’re prepared to stop. As a result, the JX will stop itself completely. Considering the Around View Monitor is good enough to prevent you from backing into anything in the first place, the BCI is just more of a peace of mind type of feature. With that said, it definitely works if it has to. I put a medium sized empty box behind  the JX, flipped it into reverse and witnessed the vehicle stop itself before hitting the box (albeit just by a hair which is a bit nerve wracking).  This sort of technology is great, although Volvo was the first to use it on a production vehicle, but it’s good to see it making its way onto other vehicles. 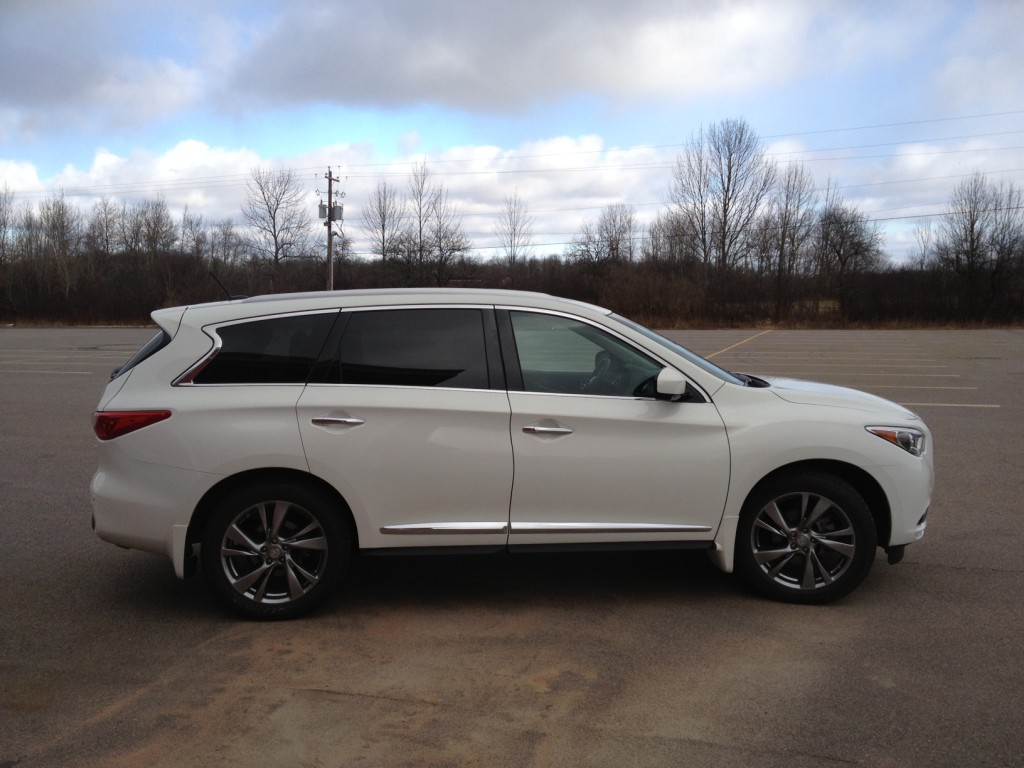 Another type of safety technology (again, first debuted by Volvo) making its way onto other vehicles is blind spot monitoring and lane departure warning. The former senses when there is a vehicle in your blind spot and lights up an orange light by the side mirror to warn the driver. The other tracks if the vehicle is starting to veer out of lane and will emit a warning noise and will even brake the wheels on the opposite side of the vehicle to pull it back into its lane. I found this feature to be annoying so I turned it off, however those with a history of driving while drowsy should likely keep it on. 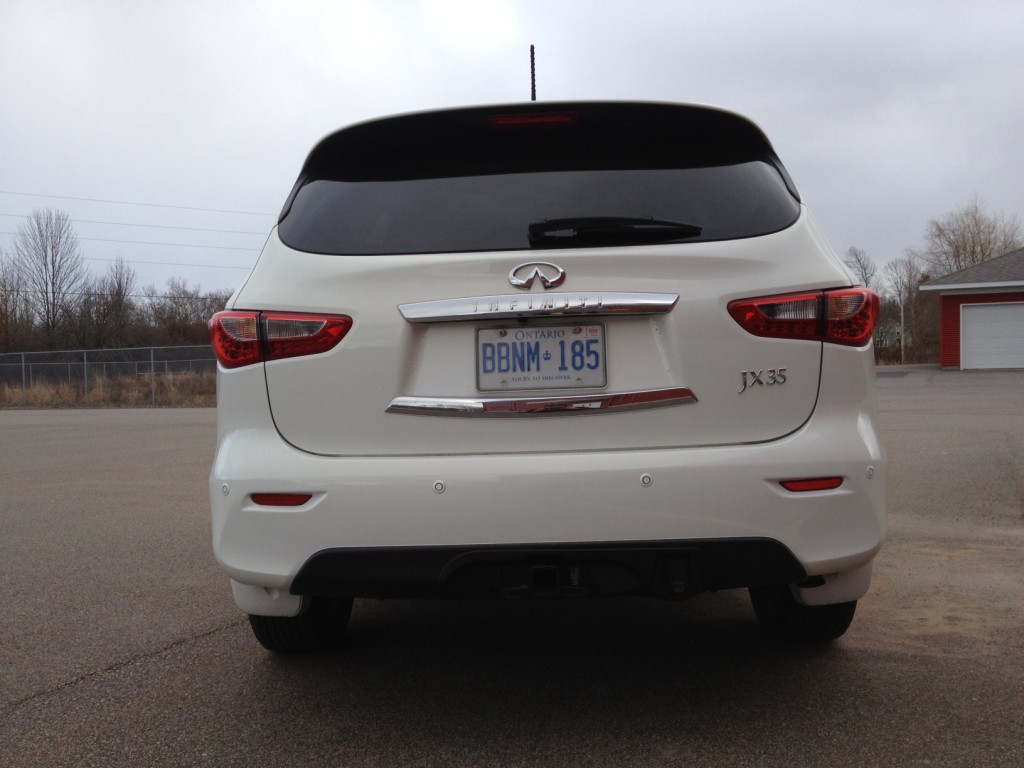 The safety features don’t stop there, as the JX also has a frontal collision warning as well as laser guided cruise control. What it does is keep a steady and safe distance between you and the car in front of you. So if the vehicle up front slows down or speeds up, you won’t have to continually adjust the speed of the cruise control. While I found this feature to be useful for the most part, I also found that the JX was overly cautious with the distance it limited itself to between itself and the car in front. This allowed for a rather large gap which meant lots of cars kept creeping their way into the gap, forcing the system to slow down and speed up a lot making for a rather inconsistent and sometimes bothersome ride. 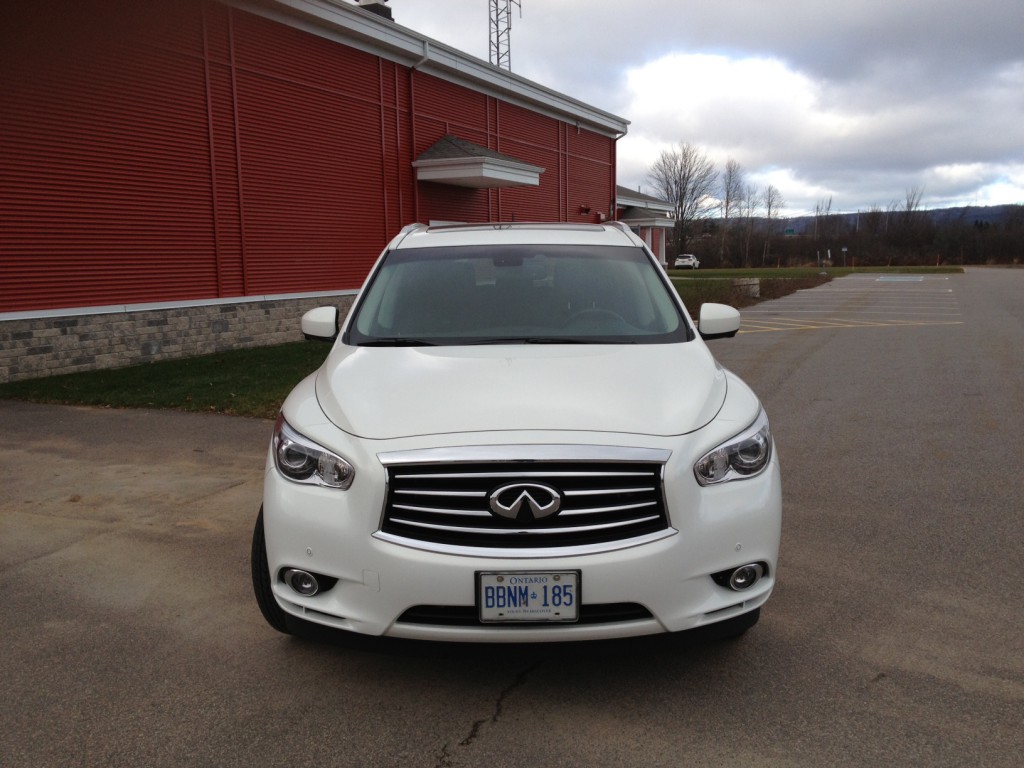 The JX is also comes with Infiniti Personal Assistant (IPA) which all new Infinitis now get. It is a 24 hour personal concierge  hospitality feature –in English, that means it allows you access to professionals through your smart phone. There you can get everything from emergency assistance to weather forecasts to latest sports scores to party planning advice. Yes, party planning advice. In fact the press release encourages owners to ask them anything so I was tempted to ask them why I can’t seem to get my soufflé to rise in the oven, but unfortunately, I forgot to do so. 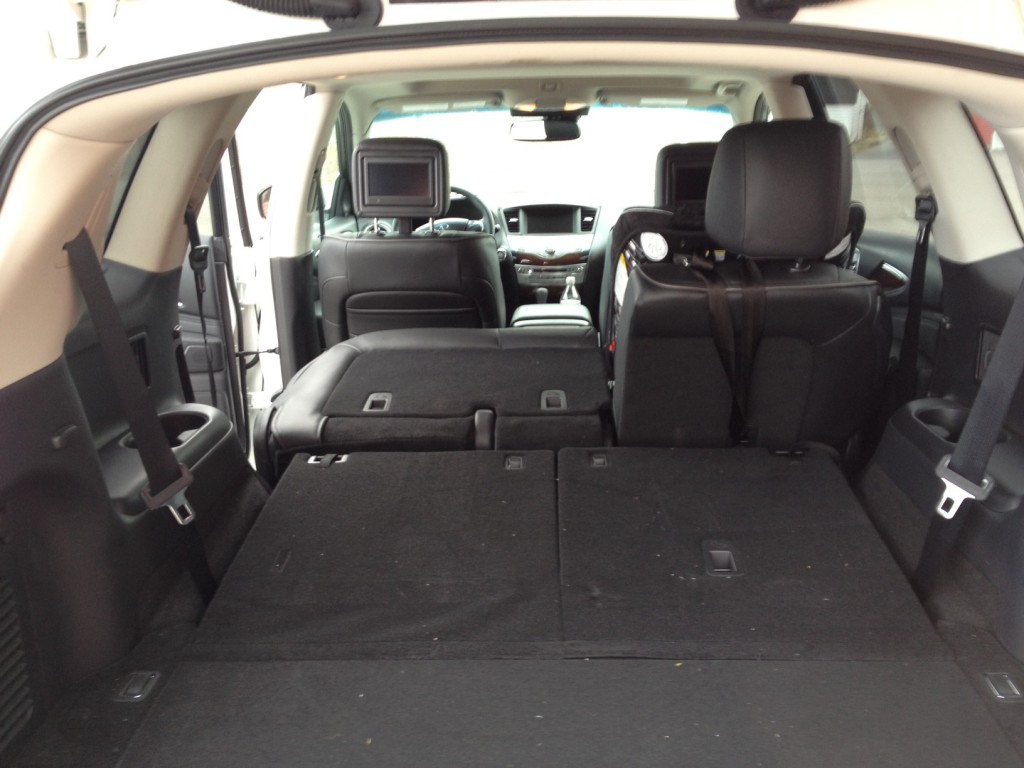 The JX gets Nissan’s award winning VQ-series engine which is very much a good thing. Unfortunately Nissan mated it to a Continuously Variable Transmission which, admittedly is among the best as far as CVT’s go, but it’s just not desirable at all to this author. Power is rated at 265 horsepower and 248 pound foot torque. This is adequate but since the JX is so heavy and since the CVT robs it of any power more often than not, the JX felt quite sluggish, especially in Eco mode where it felt like using the gas pedal at all was deemed to be inappropriate by the JX as it fights back. There is of course regular mode and sport mode which changes the JX’s attitude as it lets you use the gas pedal properly. But be warned, if you use sport mode you’ll also use a lot of gas in the process. 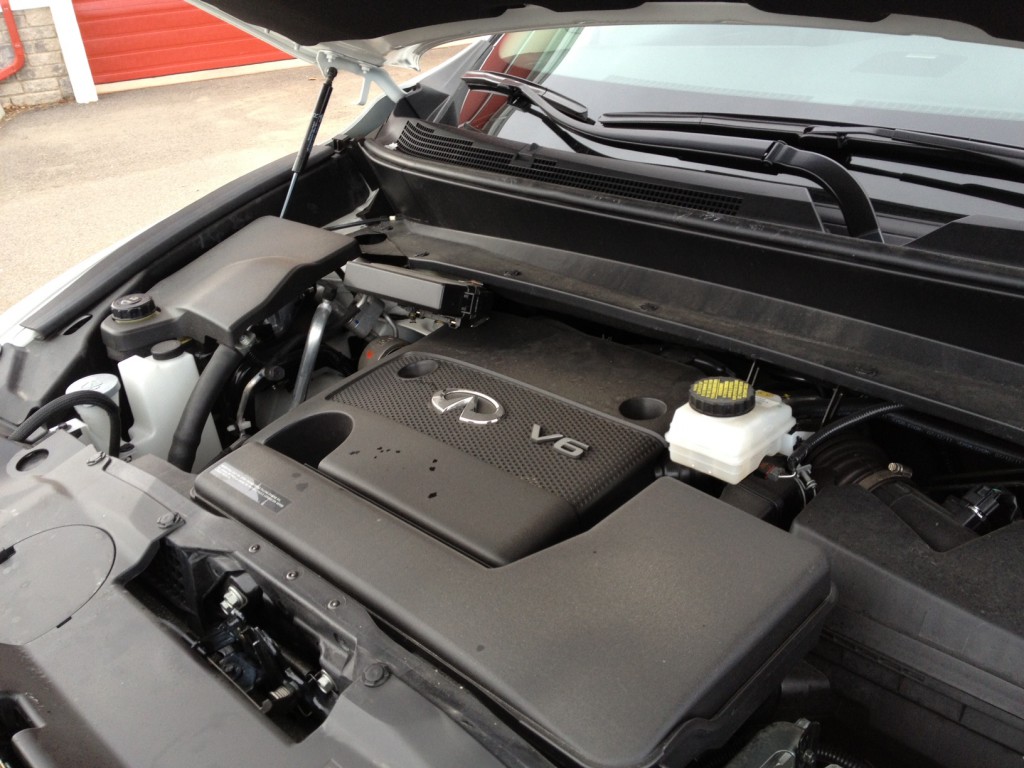 Speaking of gas, the JX is rated at 11.5 L/100 kms and 8.5 L/100 kms on the highway. During the a road trip to Nova Scotia’s Kentville area in the valley, the fuel gauge barely moved once I had arrived and had only moved slightly when I returned. City driving really made the gas gauge move, even in the dreaded eco-mode. In mixed driving I was able to average 13.3 L/100 kms using a combination of all three modes, which by the way, is easy to scroll through by using a dial on the centre console – much appreciated considering there were times when I wanted to quickly switch in between modes. 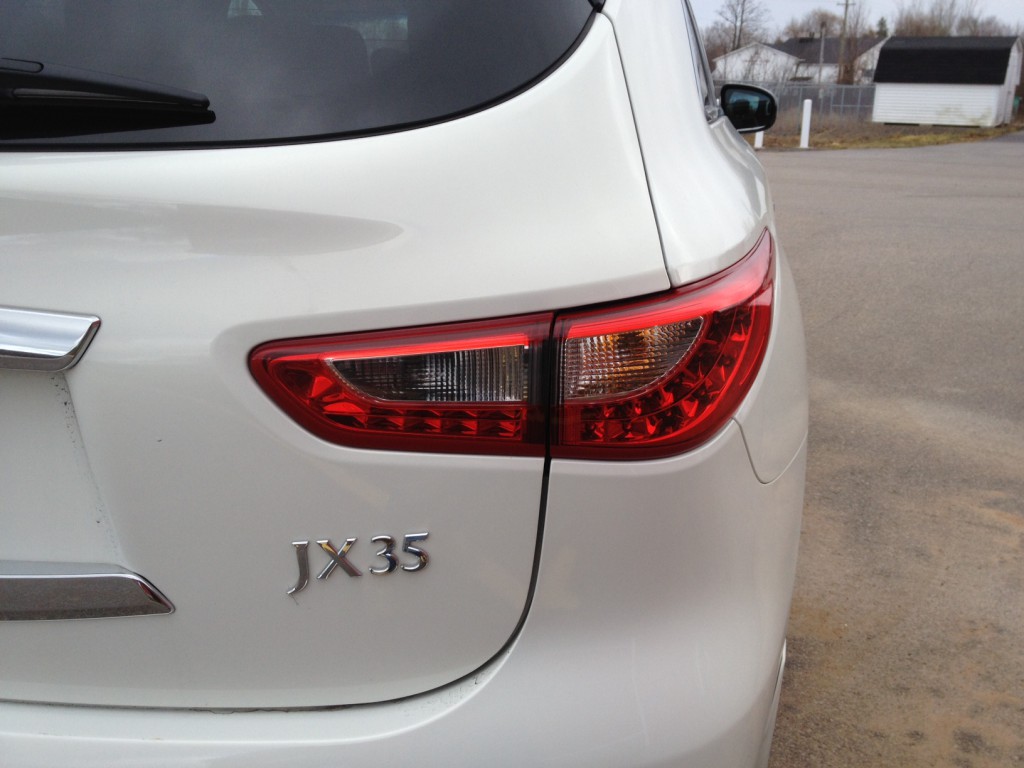 So, is the JX going to meet Gangnam style levels of popularity? No. It likely never will. However that’s not to say that’s a bad thing. What Infiniti has come up with is a much needed model to fill a massive gap in the lineup which became the elephant in the room. I know many Infiniti loyalists who wanted to move to something bigger within the brand for a growing family, but simply had to look elsewhere. Now that won’t be the case. But perhaps more importantly is that Infiniti now has a true family centric vehicle that will please both parents and, crucially kids. My nephew took a short ride in the JX and when he wasn’t looking around with intense curiosity at all the gizmos, he had a fairly large grin on his face. That’s a win no matter if you’re a parent, an uncle or even an automaker.