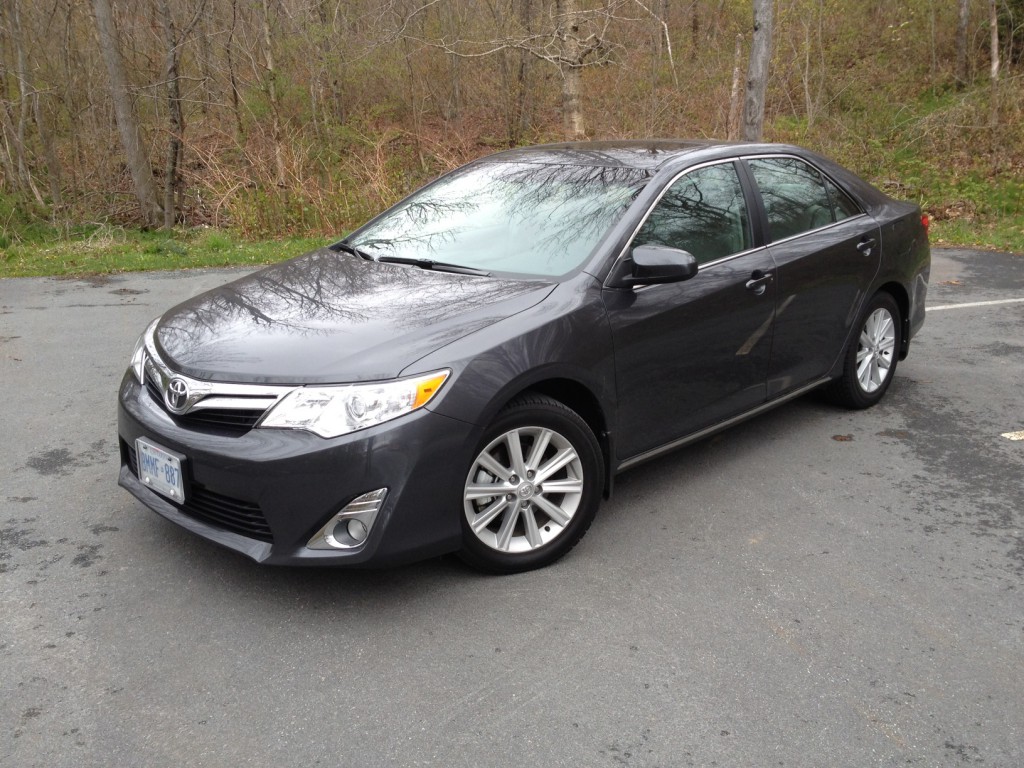 A friend of mine is having some relationship troubles with his girlfriend. He feels as though he just does not know what she’s thinking most of the time and when he tries to predict her mood, he’s more off than six month old pasta. He just can’t seem to understand what she wants – a problem most men seem to have. He recently came to me for advice.

“Have you considered just asking her what she wants?” I replied.

I think I literally saw a light bulb turn on in his head. It was so simple and so obvious that he couldn’t believe he didn’t think of it before.
Truthfully, Toyota had a similar epiphany. While the Camry is a name long synonymous with ‘mid-size car’ and sells well no matter what, they must’ve gown tired of the same criticism: It’s fine as a car, but it’s boring. And while the Camry has a loyal following, the mid-size segment is more competitive than ever before with the new Sonata, Optima and Passat – typically non-players in the segment, now offering tremendous value for tremendous cars.
So what did Toyota decide to do? 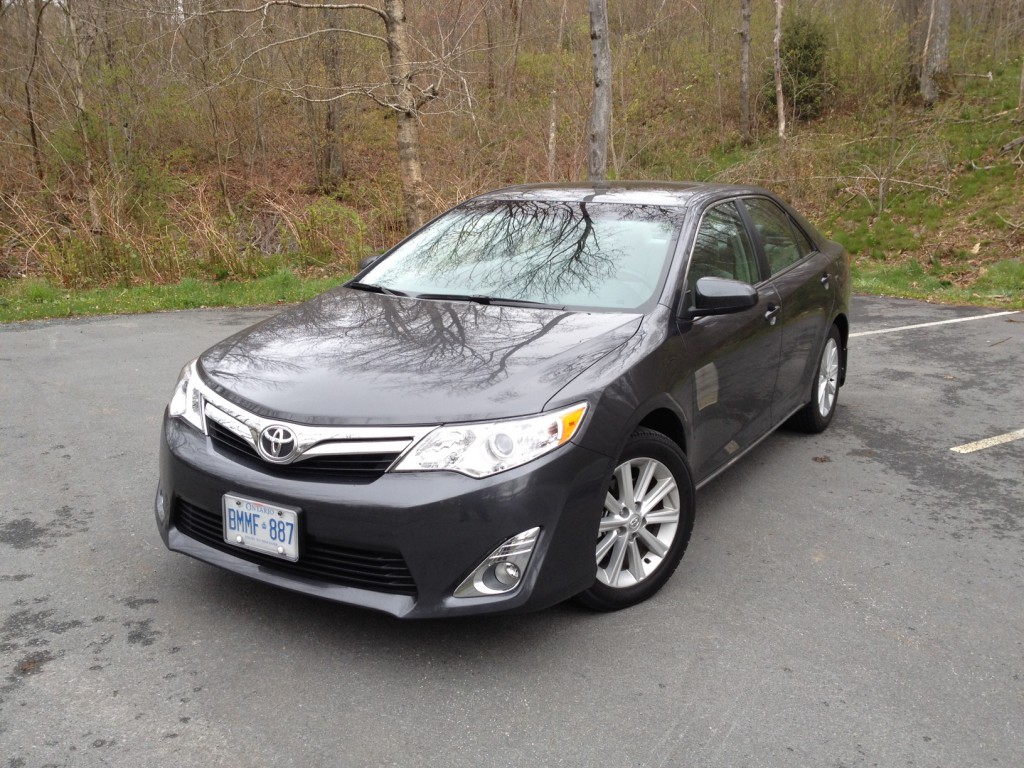 Well, instead of developing a car that they thought might appeal to the public they used that novel idea that I suggested to my relationship troubled friend: why not just ask us what we want? Brilliant, I know. And what people answered with was that they wanted a car that looked perhaps a bit more stylish, except they didn’t want the car to grow in size. Well for the most part, Toyota delivered. The car is a nice evolution of the previous model and overall it looks fairly stylish. The front fascia almost looks a bit too busy to my eye with those grille bars that only partially cover the grille, gaudy decor around the fog lights and those asymmetric headlights, but truthfully if you stare at it long enough, it seems to work. I would prefer more interesting looking 17 inch wheels, especially considering this is the top of the line XLE and the wheels that come on the sportier SE are quite eye-catching, and those tail lights seem like they’re trying a bit too hard to be different,  but overall the look is agreeable and indeed more interesting and stylish than the previous version. The look is more chiseled however I find it can look a bit awkward from certain rear angles. 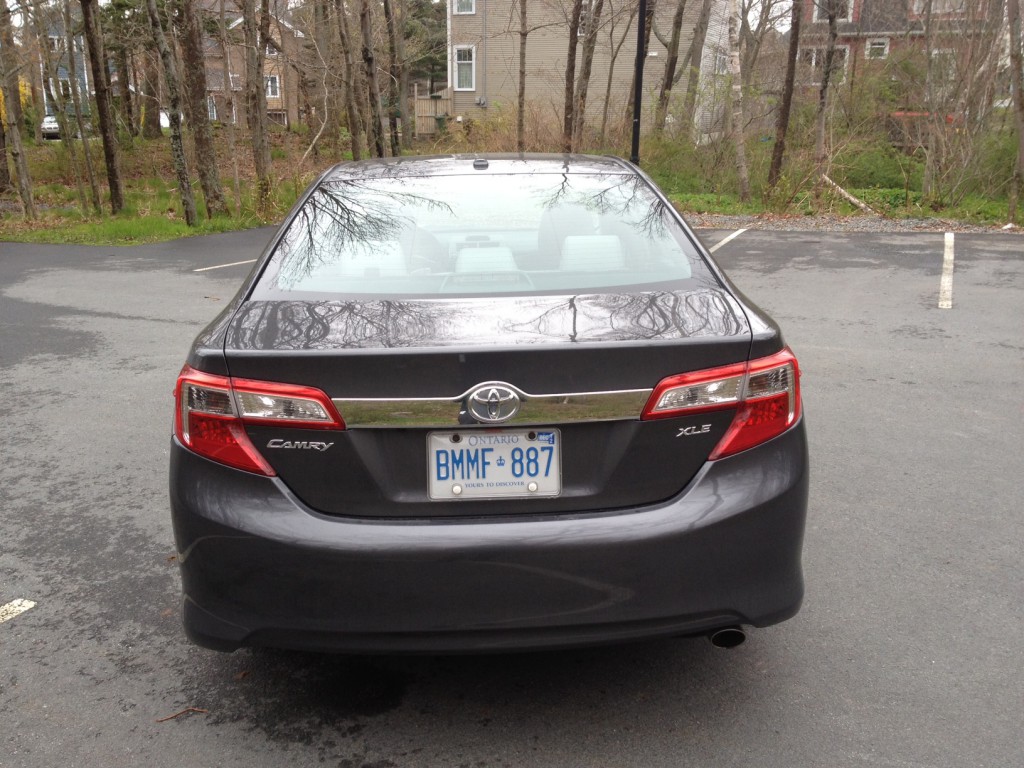 Another thing that people said they wanted was for the interior to retain that premium feel and it certainly does. In fact, it builds in a more sophisticated look with large stitching on the leather wrapped dash, leather wrapped steering wheel, quality materials, and minimal fake wood. The radio controls and the touch screen in general is responsive, although the colour and font choice makes it a bit difficult to read at a glance. Rear seat leg room and head room is great, which is probably why I’m seeing more and more new Camrys take on taxi duty where I live. In fact, probably the biggest draw to taxi driver’s is the massive trunk, and I don’t think I can overstate that enough. It’s really quite big. Officially, there’s 436 litres of cargo room back there and to my knowledge, that’s only bested by the newly redesigned Passat. 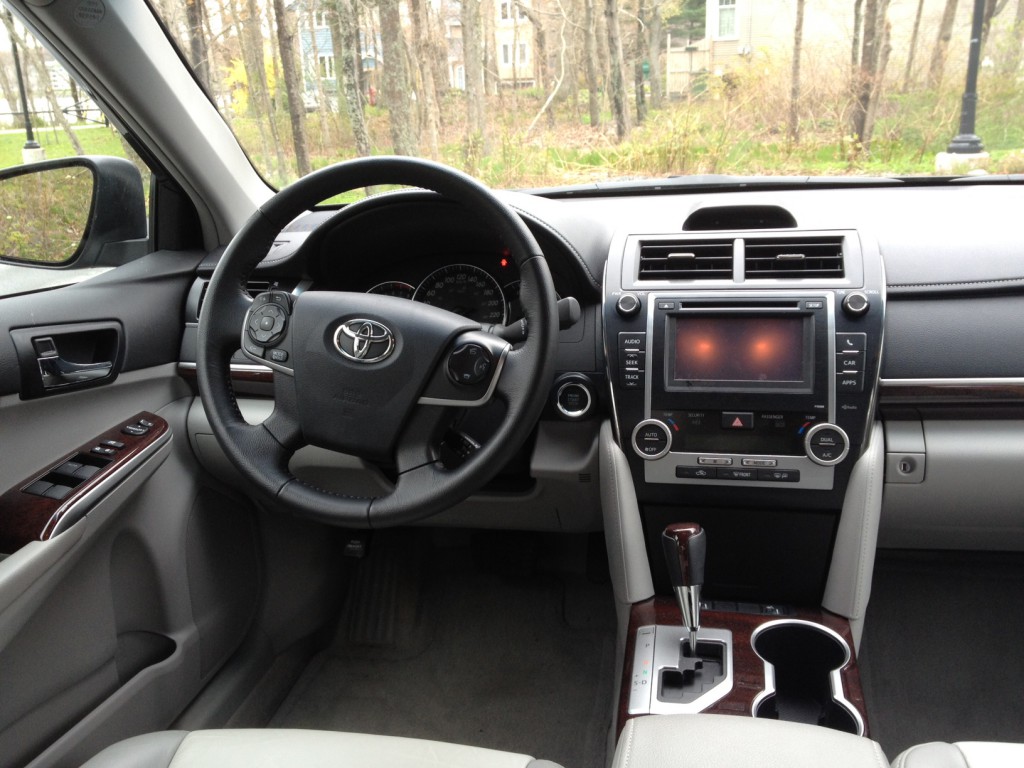 The Camry was always a star performer on the highway with a comfortable, efficient and smooth ride. This generation Camry is no different, in fact I’d argue that’s it’s probably smoother and feels more solid on the highway. Around town, the Camry is quiet and compliant. There was a few times when I thought I was driving in a Lexus rather than a Toyota. But while these character traits may appeal to some Camry owners, Toyota found out that some also didn’t want a quiet comfortable ride to sacrifice a bit of fun every now and then. Traditionally, fun and Camry were polar opposites, but Toyota has actually re-tuned the suspension and tightened up the body structure to improve handling. The result is quite good, although you won’t feel like you’re taking a corner in a Porsche, the Camry does provide more of a planted feel giving confidence to the driver. There’s even a bit of steering feedback for the performance demon that most Camry drivers keep buried away inside. 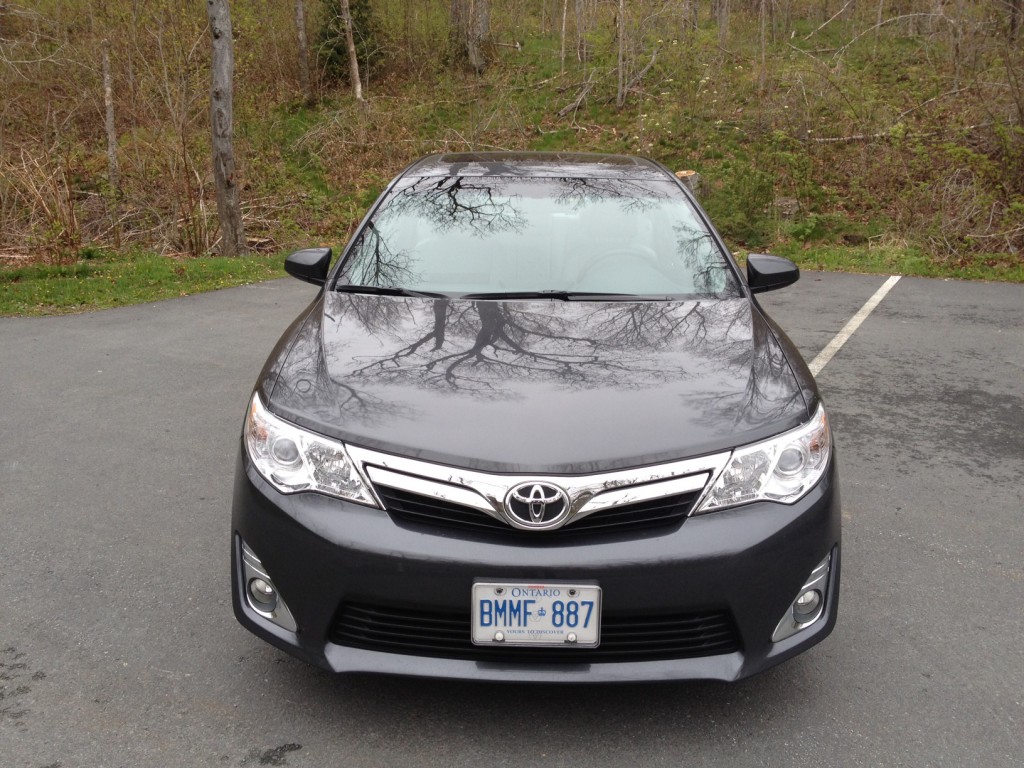 While these new performance additions help the Camry retain some credibility for handling, they’re really only useful around town which makes the Camry more nimble and easy to maneuver it tight parking lots. Toyota has been so confident in the handling abilities of the new Camry, they’ve decided to do most press vehicle launches at a self made track Auto-cross style. I think this is a bit of a stretch to market the Camry as such, but make no mistake, the Camry will surprise you in the handling department. 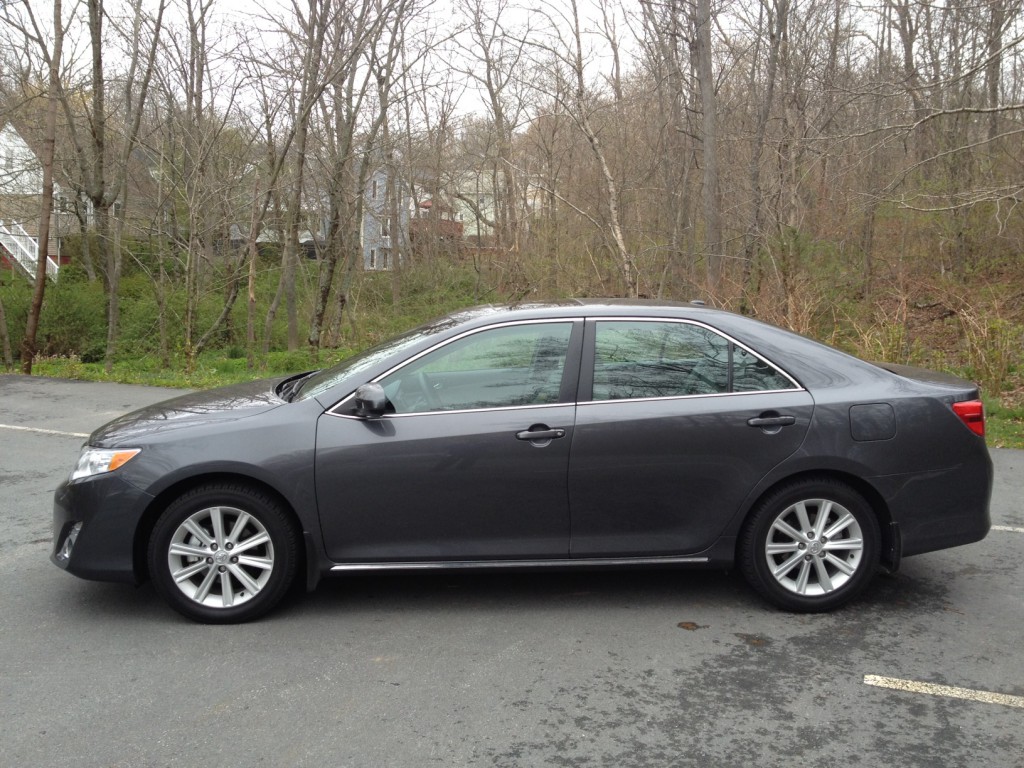 Next up, people said they wanted a powerful engine but didn’t want to sacrifice fuel efficiency. In the past, the XLE only came with a V6 engine, being the top of the line trim level. Now a 2.5 litre 4 cylinder engine is available which makes 178 horsepower and 170 pound feet of torque. Is this ever a good engine! It’s buttery smooth and quiet. When pushed, the engine comes to life and is a bit noisy, but it is very peppy considering the power numbers. Put your foot down and you’re off with no lag and you can quickly get out of the way of just about anything. This impressed me almost every single time I put my foot down. The quickness almost had me wonder if there was actually a V6 under the bonnet and not a 4 cylinder. It’s a very good engine, hands down. But it’s agility is partly due to the overall weight loss from the previous model. This generation Camry actually weighs about 200 pounds less than the outgoing model. 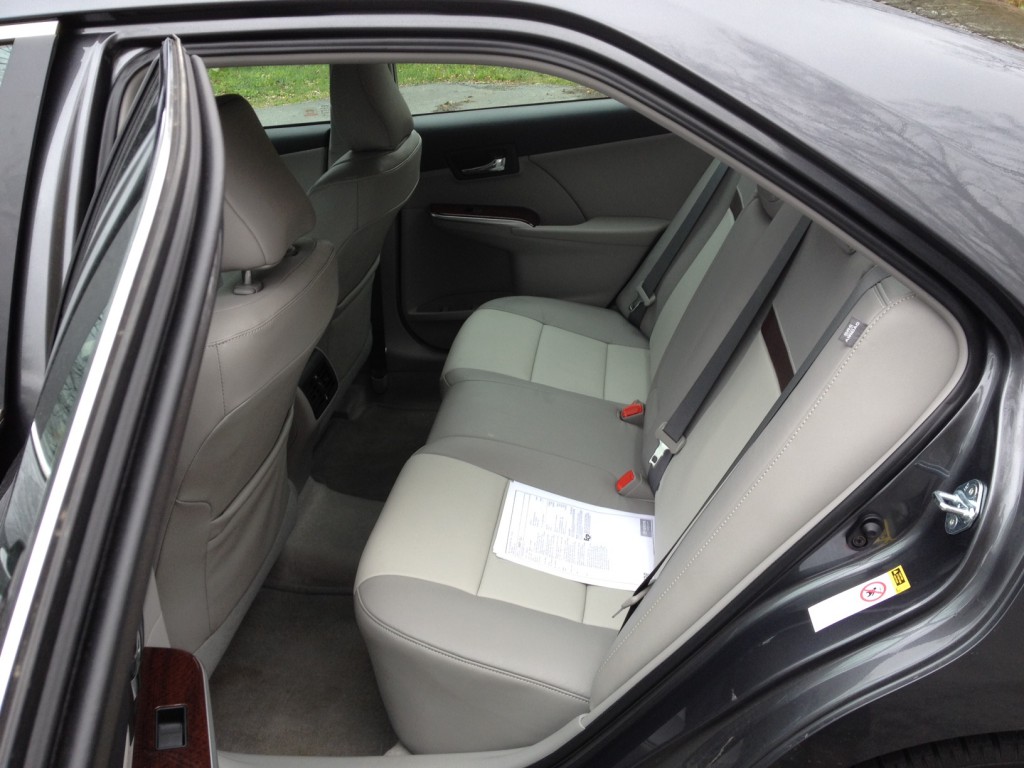 Also due to the weight loss, the Camry achieves impressive fuel efficiency numbers: 8.6 L/100 kms city and 5.6 L/100 kms highway making it the most fuel efficient in its class.  What’s even more impressive than that, though, was I was actually able to realize close to those numbers effortlessly, without having to adjust my driving style for fuel efficiency. Typically it’s near impossible to achieve the stated efficiency ratings on most cars. The trip computer record’s your mileage for each trip and then puts it on an easy to read graph. Very intuitive. 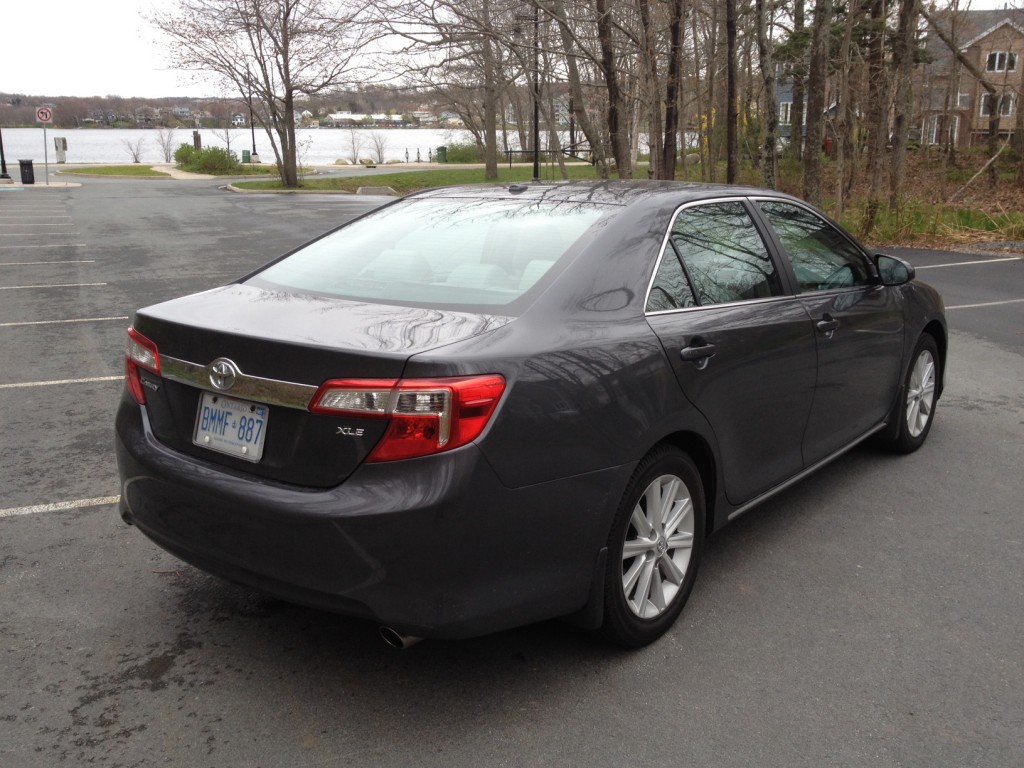 So the 4-cylinder’s unexpected power and great gas mileage had me scratching my head as to why anyone would want to opt for the more expensive and less powerful V6. Especially since the Camry Hybrid is the clear winner of all the trim levels. It gets better mileage than the 4-cylinder yet it’s more powerful with 200 horsepower. 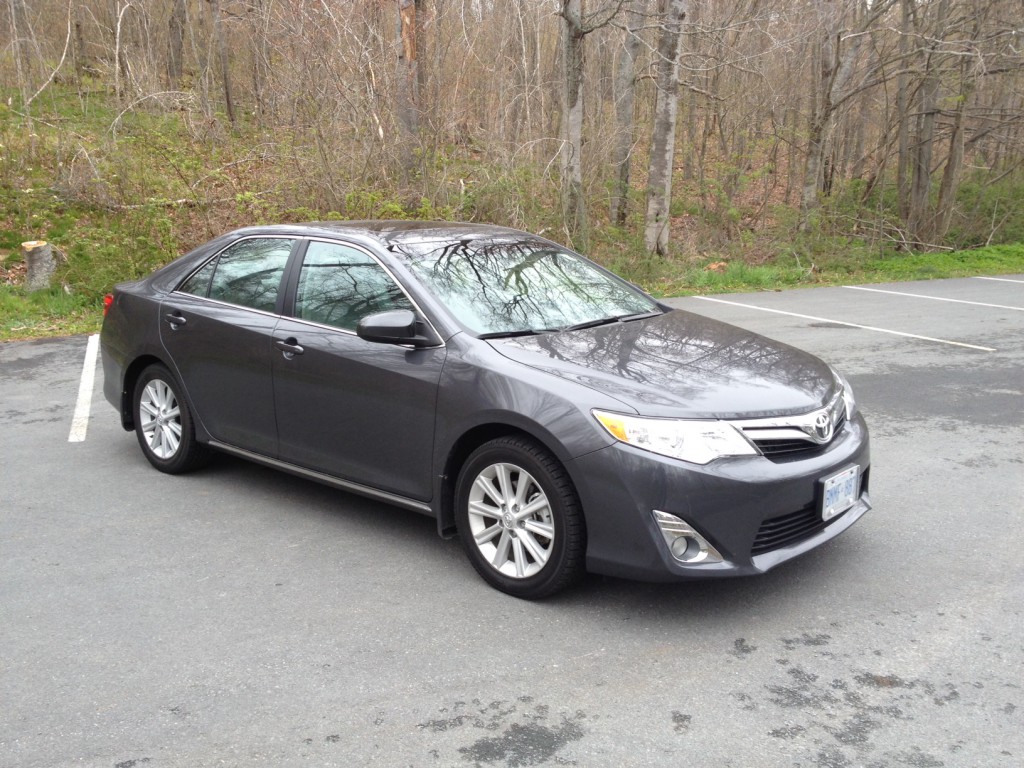 And that’s when it hit me. I needed to take my own advice that I gave my friend. It worked for him after all, he is now quite happy with his girlfriend and their relationship is stronger than ever. So I decided to be open and honest with my girlfriend, who knows I’m a performance car enthusiast and shares my views on cars. Knowing full-well and also agreeing with my general disinterest for the Camry, I sent her a text saying “I kinda like this car”. It was quite a shock to her. But it’s true. People need to forget everything they know or think they know about the Camry because it’s now such a good car that it can easily retain its loyal base, all while luring in those who would never give it a second thought.

What a novel ideal it was to just ask people what they wanted in a car, Toyota.