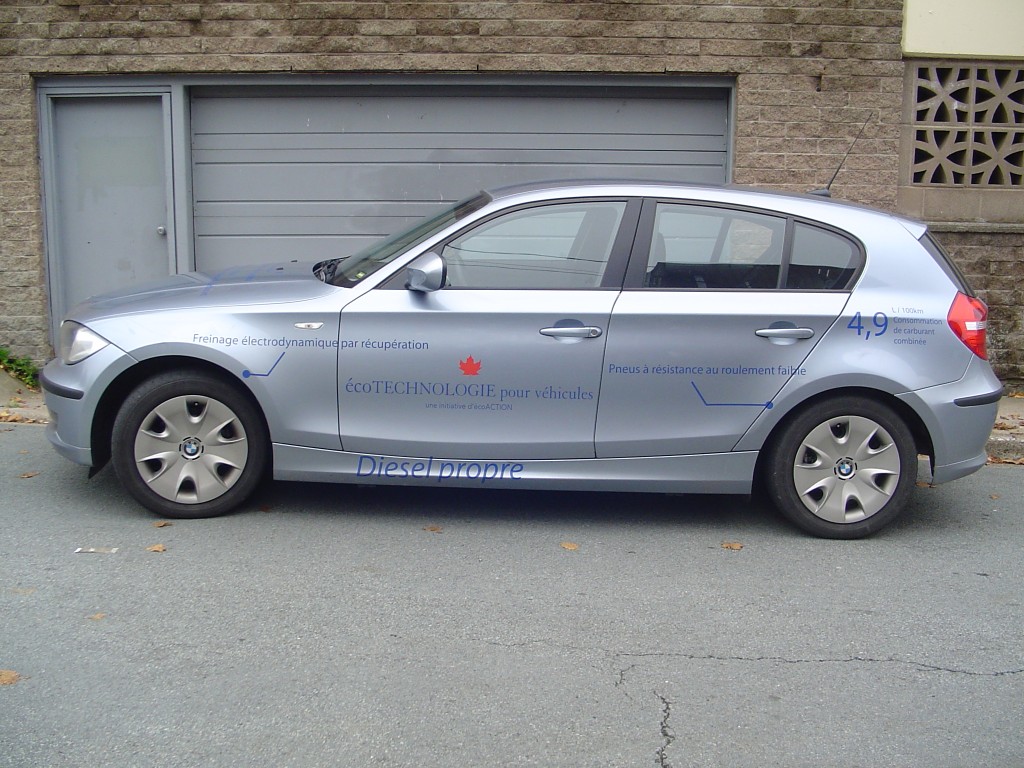 For this new car review I’ll skip my usual pretentious introduction where I talk about something that seemingly has nothing to do with the car, but then I somehow tie it all together at the end . Because this review is definitely very unique – it’s about a car that isn’t even available for sale in Canada.

Why even bother writing a review that very few Canadians will get to drive? Well, for that very reason. It’s a unique experience. But on top of that, this is a car that BMW very well could bring over to Canada and it would fit in quite nicely. BMW currently sells its 1-series in two forms (coupe and cabriolet) in Canada, but there are some people that may not realize that there is actually a hatchback version available world wide everywhere but here. I think that’s a mistake. While the 1-series hatchback may not be palatable to American taste buds, Canadians tend to find hatchbacks more agreeable.

On top of that, this particular model would likely do quite well. It’s a diesel and diesels are well suited for long distance driving. And if you haven’t noticed, Canada has the second largest land mass in the world. As a result not only do we do lots of driving, but we are the 3rd largest emitters of carbon dioxide (CO2) per person in the world because of it.

So is the 118d a car that we’re missing out on, or is it best kept elsewhere?

Firstly, I should explain how I was actually able to drive the 118d in Canada. By now, you’ve likely noticed all the English and French writing on the 118d’s paint. That’s because the car belongs to Transport Canada. They were in town doing to real world evaluations of three cars, one of which is the 118d. They bought the car straight from Germany (the owners manual is even in German which is pretty cool) and have been taking it across the country. Transport Canada’s evaluations will help the government with future policy regulations. Obviously they would like to have public input. 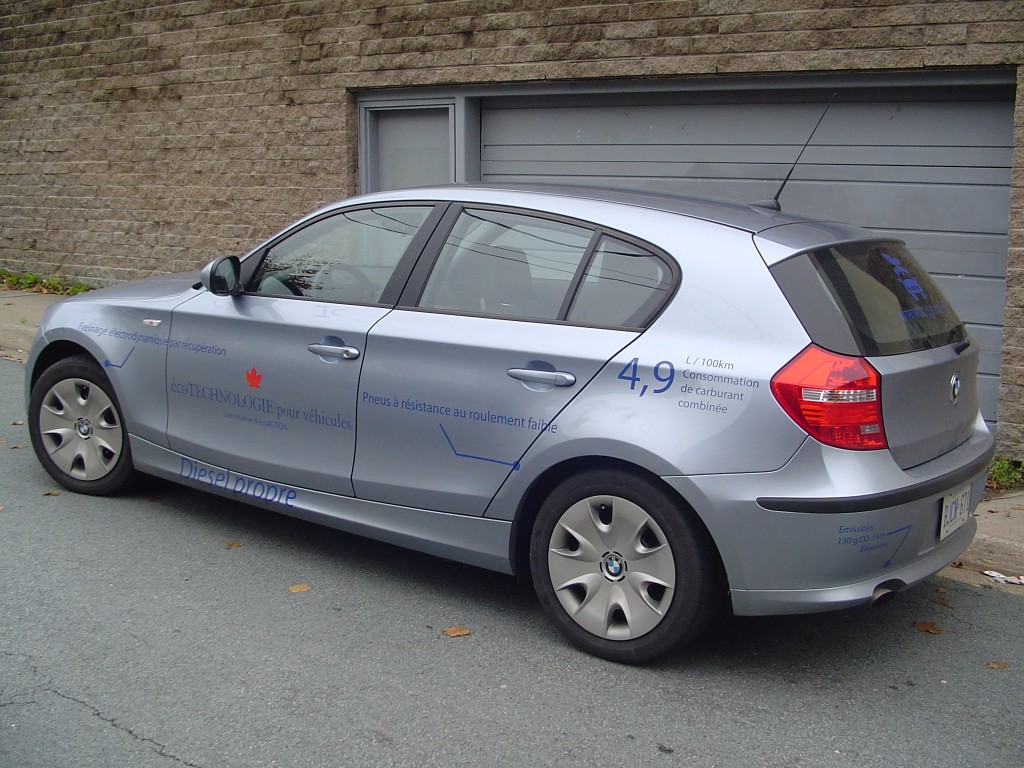 Since I’m really into cars and am an upstanding Canadian citizen (though the Halifax Regional Police seem to disagree for some reason), they actually let me take the 118d out for a spin. Usually they don’t let people do this. The other two cars were a Toyota Prius plug-in and Mitsubishi’s all-electric i-Miev. The latter is generally used for people to try out if they want, but the BMW is not to be used by the public. Obviously I talked my way into driving it like an asshole. 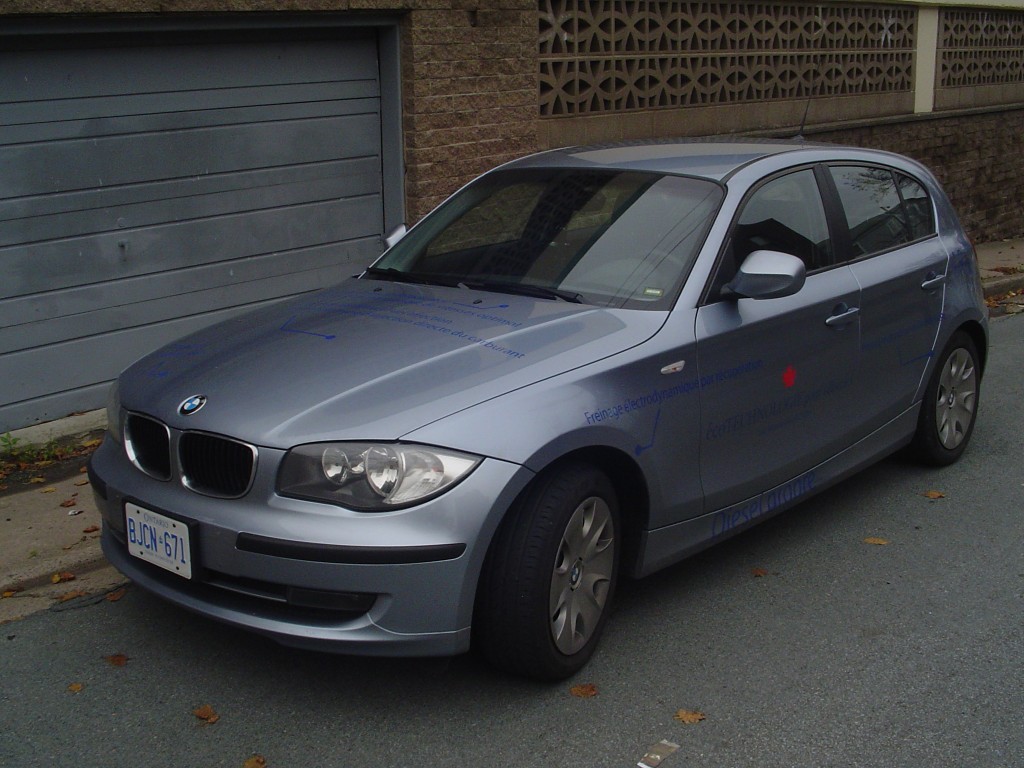 The 118d does not use the same diesel engine that can be found in the 335d and the X5d. It’s a smaller 2.0 litre turbodiesel which produces 148 horsepower and 221 pound feet of torque. The 118d recently won World Green Car of the Year and it’s not hard to see why. The 118d is rated at an impressive 4.9 L/100 kms. By comparison, the Toyota Prius is rated at around 4.0 L/100 kms and it uses a million pieces of technology to help it achieve that. The 118d relies on the engine alone for its rating – meaning, it’s quite simply a brilliant engine. The 118d is a million miles kilometers ahead of the Prius when it comes to driving dynamics as well. 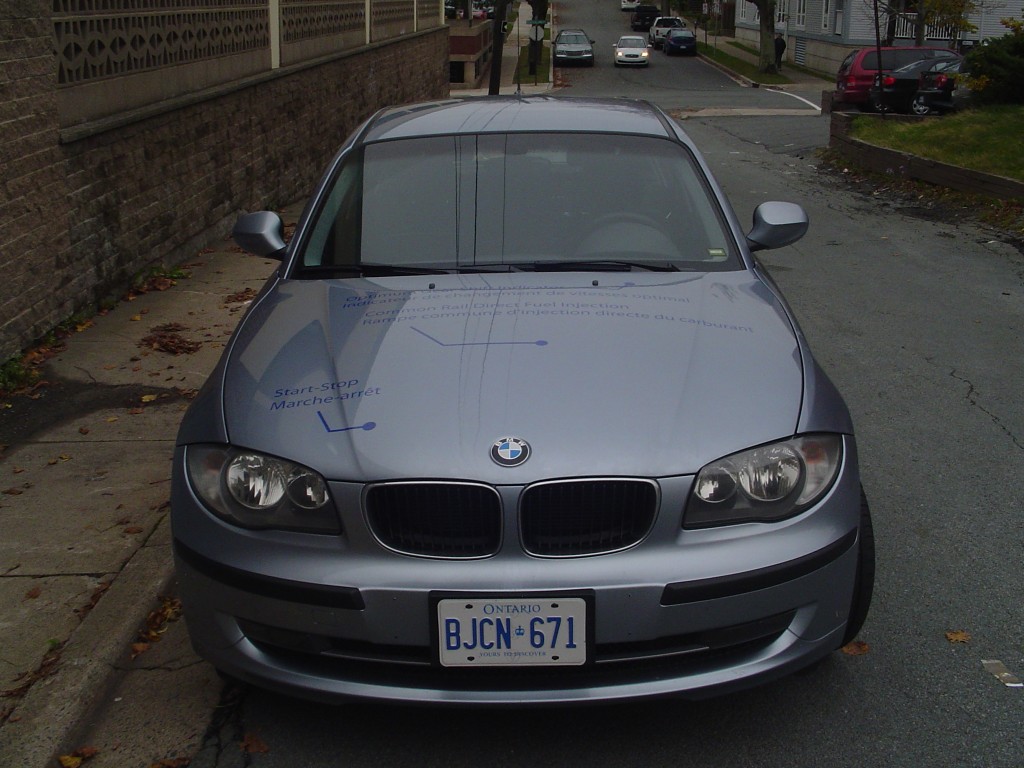 While you won’t have your head slam back into your headrest at take-off, there is still decent punch, especially when mated to the 6-speed manual, which this car has. 0-100 takes about 8.8 seconds which is a full second faster than the Prius. It certainly feels faster than it is actually going. Engine noise is very untypical for a diesel in that it doesn’t sound like one at all. If I didn’t know it was a diesel before hand, I probably wouldn’t have noticed right away. It sounds and feels like a regular gas injected engine. Again, kudos to BMW for making such a great engine. One notable problem though was the engine cover. When I started to push the 118d, you could hear something clattering around in the engine bay. After pulling over for further examination, I found that the cover was lose. I tried to snap it back in, but no dice. I then just removed the cover all together and stored it in the hatch. I told myself that I would just put it back in before I returned the car, but as I write this, I realize that I didn’t do that. Oops. In fact, you can see it in the hatch in one of the pics I took. Anyway, that’s either some shoddy build quality which is not typical of BMW at all, or Transport Canada was messing about with the engine and didn’t put the engine cover back on properly. 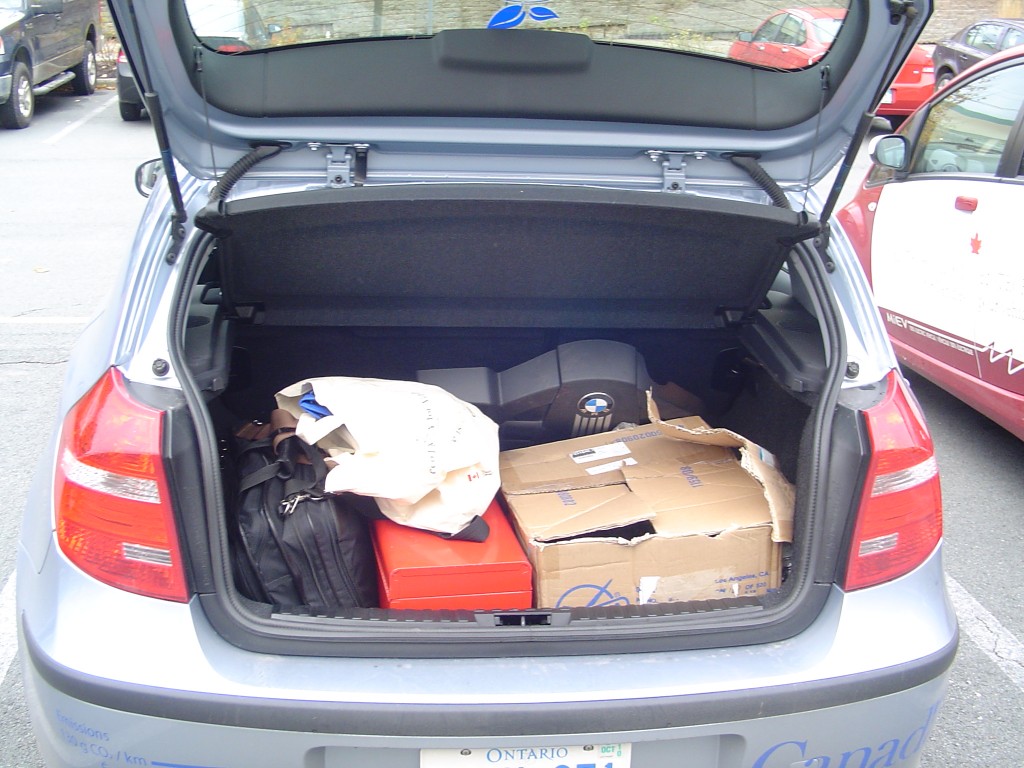 Cruising at highway speed is definitely this car’s forte. Even though the engine is not designed for performance (at least not performance typical of BMW’s) I still found myself way above the speed limit most of the time without realizing it. The engine is quite smooth – extremely smooth in fact for a diesel. And despite my driving over the speed limit, I was averaging 5.1 L/100 kms. One of the Transport Canada guys told me that they actually beat the 118d’s 4.9 L/100 kms rating as they got 4.2 L/100 kms on the way to Nova Scotia. That’s quite impressive since it’s hard to meet or beat any vehicle’s efficiency rating, though admittedly they probably used efficient driving techniques to help out. 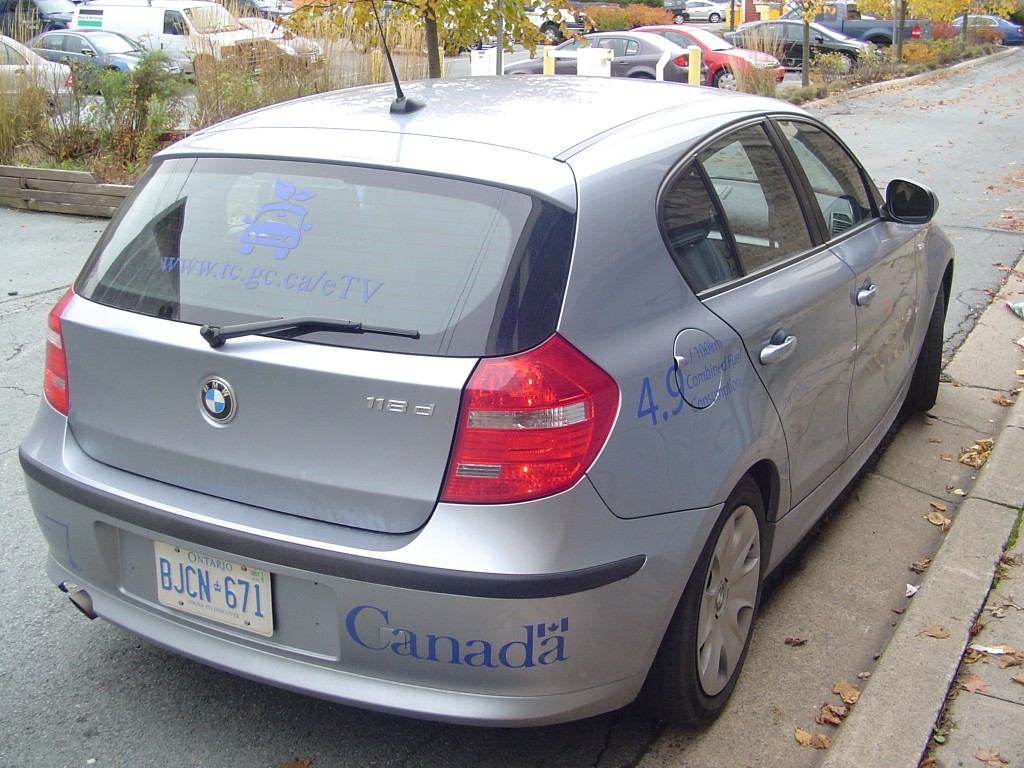 One interesting gas saving feature is the stop/start technology. This is typically used in hybrids where the engine automatically shuts off when you come to a stop and restarts itself once you take your foot off the brake. It’s all very seamless, and quite easy to get used to. I’ve never experienced it on a manual transmission before, however. What you have to do in order for the stop/start to work is put the car into neutral before coming to a complete stop and keep your foot off the clutch. The engine will then automatically shut off. The engine will restart itself once you depress the clutch. It takes some getting used to if you are used to keeping the clutch depressed and in gear when stopped. 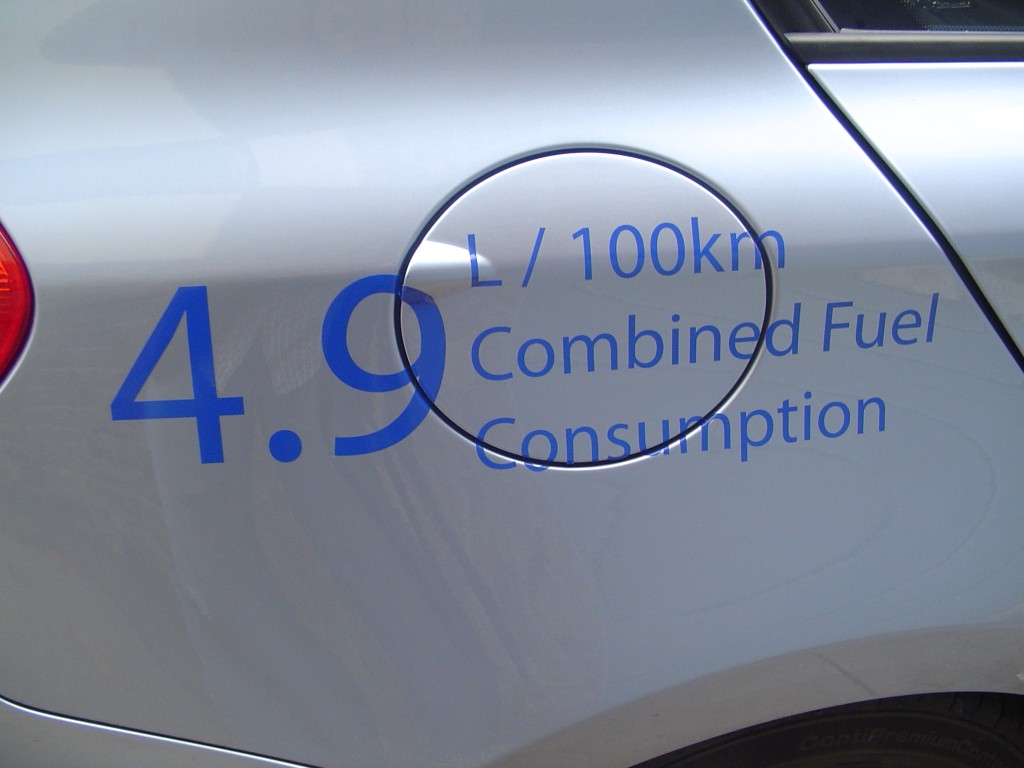 Being a 1-series, handling is sublime. Very sharp, precise steering with no body roll. The 118d has a tendency to over steer every so slightly, even with the traction control still on, but this definitely will not hinder in spirited driving. Despite having smallish 16 inch wheels with ridiculous hubcaps, the 118d will not disappoint in the handling department.

The interior on the other hand is a bit of a disappointment. It’s quite obvious that this car is a base car. Even the steering wheel looks cheap. Quality of materials are decent, but overall the layout is quite bland and uninspiring. The seats, however are supportive. The rear seat room is tight, there’s no other way of putting it. In fact, it feels smaller back there than in the 1-series coupe. Still, the 118d has a middle seat and the 1-series coupe doesn’t, so it’s a bit more practical. The boot is also smallish, but with the rear seats folded down, there’s a decent amount of room. 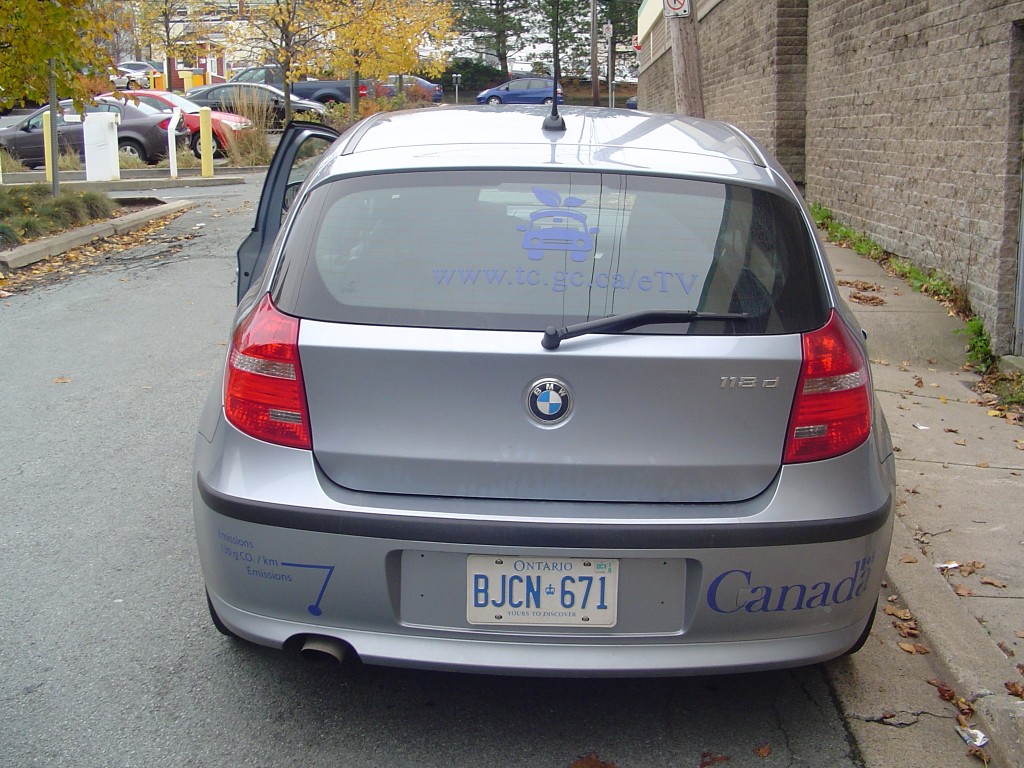 The overall styling is something I’m not quite sure about. The coupe is so sexy and eye-catching that when you turn it into a hatch, it sort of loses something. Plus, those wheels really take away from the overall look in my opinion. The side profile gives almost a bit of a micro-van look, but the view from the rear is good. Also those clear euro turn signals are quite a nice touch, but those would never pass Canadian safety regulations if the 118d ever came to our shores. 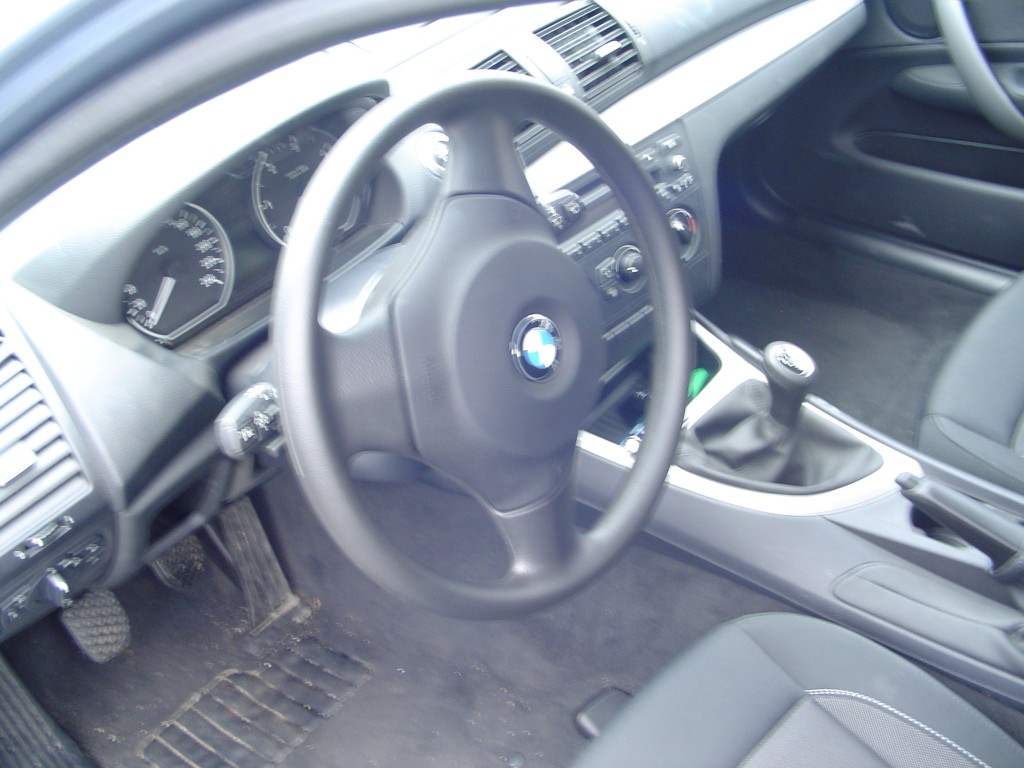 Speaking of coming to our shores, I really hope it does. Until this point, if you wanted to save gas or if you had any concern for the environment, you had to sacrifice performance. BMW has proven that you don’t necessarily have to anymore.

The 118d is an excellent blend of acceptable performance with incredible efficiency.