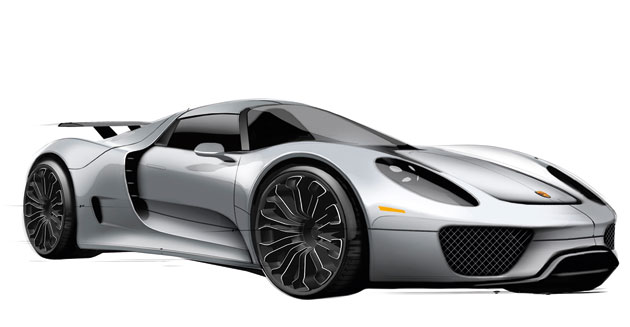 Porsche has just released this image of the production version of the 918 Spyder. Looks tremendous!

It will officially be a plug-in hybrid and will get a 4.0 litre V8 along with two electric motors that produces a combined 218 horsepower. That’s a total of 718 horsepower in a car that supposedly gets 3L/100 kms! Very impressive!

The 918 still hasn’t been rated yet by U.S efficiency standards, but we should still expect fairly impressive numbers. On top of that, it will have a 0-100 time of 3.1 seconds with top speed being 320 km/h. What’s even more imrpessive than that is the 918 Spyder can apparently run on both electric motors up to 150 kph before the gas engine kicks in.

If this all sounds good to you, get on the phone to your local Porsche dealer ASAP because Porsche also said they will only build 918 for the entire world. Yeah, very limited production. Oh, and it will also cost you about $845,000.