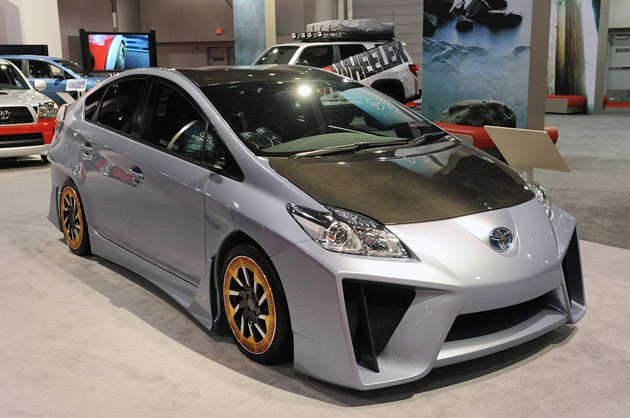 SEMA is currently underway and there have been some interesting cars this year. If you don’t know, SEMA stands for Specialty Equipment Market Association and basically what they do is show off visually modded cars that only a Fast & Furious douchebag would be interested in. This year, there seems to be an unusual amount of cars present at the show that would otherwise never be modded. For instance there is a stretch Toyota Sienna minivan limo, a stretched Scion XB limo as well as this vomit inducing Toyota Prius.

The Prius is called the C&A Custom Concept and thank God it’s just a concept. It’s trying way to hard to have a Lamborghini Reventon style front end. The Reventon front facia really only works on a Lamborghini.

On top of that, the C&A  has a carbon fiber body kit and the body is dropped by a ridiculous 4 inches! And believe it or not, those are actually 18 inch forged aluminum wheels. Except they look way smaller thanks to the stupidly massive front and rear overhangs.

But don’t worry, as if it couldn’t get any tackier, the C&A comes with an interior COMPLETELY made of suede. Just because if you’re gonna do it, you might as go all out ugly.

As you guessed, there have been no modifications under the hood, so what we are essentially left with is a normal non powerful Prius that probably handles decently and looks like a piece of Darth Vader’s stool.