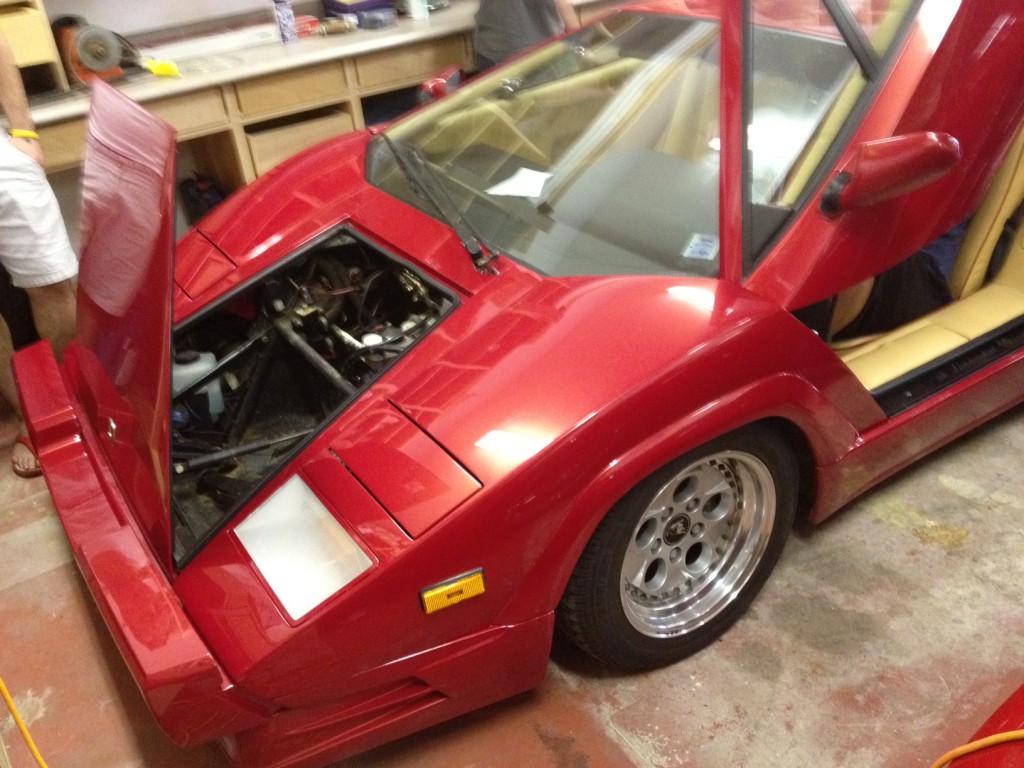 These were the cars that met up with me and my car at Halifax’s Point Pleasant Park on a sunny Sunday afternoon. There’s no doubt that Point Pleasant has beautiful walking trails by the water and into the woods, but on Sunday afternoon it’s more of a people watching spot than Starbucks. And by people I mean cars.

While my friends’ rides are impressive to be sure, at Point Pleasant at any given time you can see everything from a Ferarri 599 to a restored Jaguar E-type. And the list goes on. Muscle car junkies love to park in drones with classic Mustangs, Camaros and Corvettes with the hoods up for fellow car creepers to have a peak. While on the other side of the park, generation Y holds down their fort with modded WRX’s, EVO’s and Skylines. It really does have the plot lines of some sort of car themed version of Westside story. Either that, or some horrible Nova Scotian version of the Fast and Furious series.

While I have no shame in admitting to parking at Point Pleasant Park for hours and waiting to see what will show up, on this particular day we were the only ones there with any sort of notable cars (aside from the modded Neon which was notable for all the wrong reasons).

Little did I know I was about to meet one of my boyhood automotive icons in the flesh.

However it wasn’t at the park when my encounter took place. All it took was a suggestion from my friend Kyle.

“Let’s go see if we can take a look at the Countach,” he suggested.

I’m surprised I didn’t give myself whiplash, I looked up at him so quickly. I couldn’t even express the excitement at the mere possibility of seeing a Countach in the flesh. All I could do was stare at Kyle with my eyes wide and my jaw to the pavement in order to communicate that I wanted him to elaborate.

“Yup, dad has a friend who just picked one up. Let me just call to see if it’s cool if we stop by”.

Kyle got the go ahead. So, we immediately hopped into our respective vehicles and took off.

When we got to the house, it was like something out of Scarface. It was a massive house on the water, a BBQ happening on the other side of the house and lots of tight pants with exposed chest hair on the men and pretty much just exposed skin everywhere on the women. But that barely registered with me. I was still in Countach mode.

The owner of the house, as it turns out, is quite the car collector. There was a Mercedes-Benz CLS AMG parked along the side and an older Mercedes-Benz ML in front of the garage. We walked past the ML to find even more tantalizing cars in the massive four car garage.

The first car I noticed was the black Corvette ZR1. No matter what your personal feelings are on Corvettes, this one is truly breathtaking. The massive chrome multi-spoke rims, the insanely low ground clearance and the wide, menacing front fascia really make you feel intimidated. In fact, the owner decided to really impressive us by merely starting it up. That exhaust note must be among the loudest I’ve ever heard, and it was bone stock. The only let down with this car was when I sat inside and saw the same design and materials from a Chevy Cobalt. 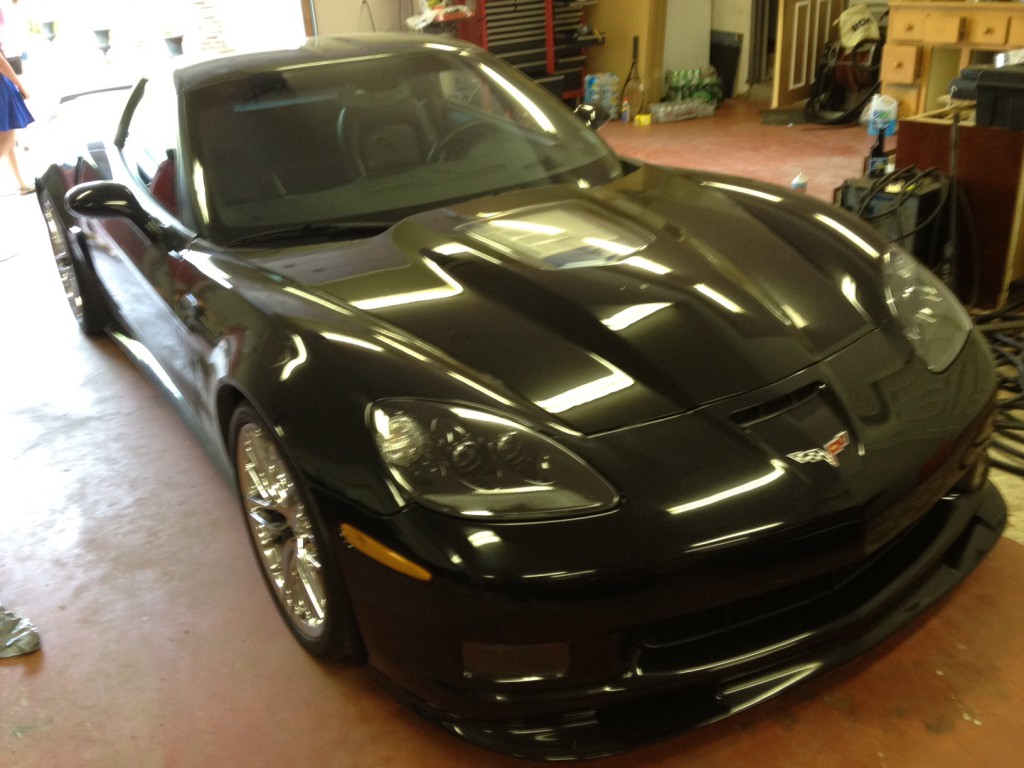 Next was the Corvette from the 90’s parked next to a Corvette from the 60’s. But the latter was no ordinary Corvette. This was the iconic Stingray. While the Stingray was before my existence, I can certainly appreciate the cars that bench marked for the ones we have today. I felt as though I needed to bow each time I looked at it. Those who know me know I’m more of a European car fan, but I certainly have tremendous respect for old muscle cars, mostly because of what they represent. 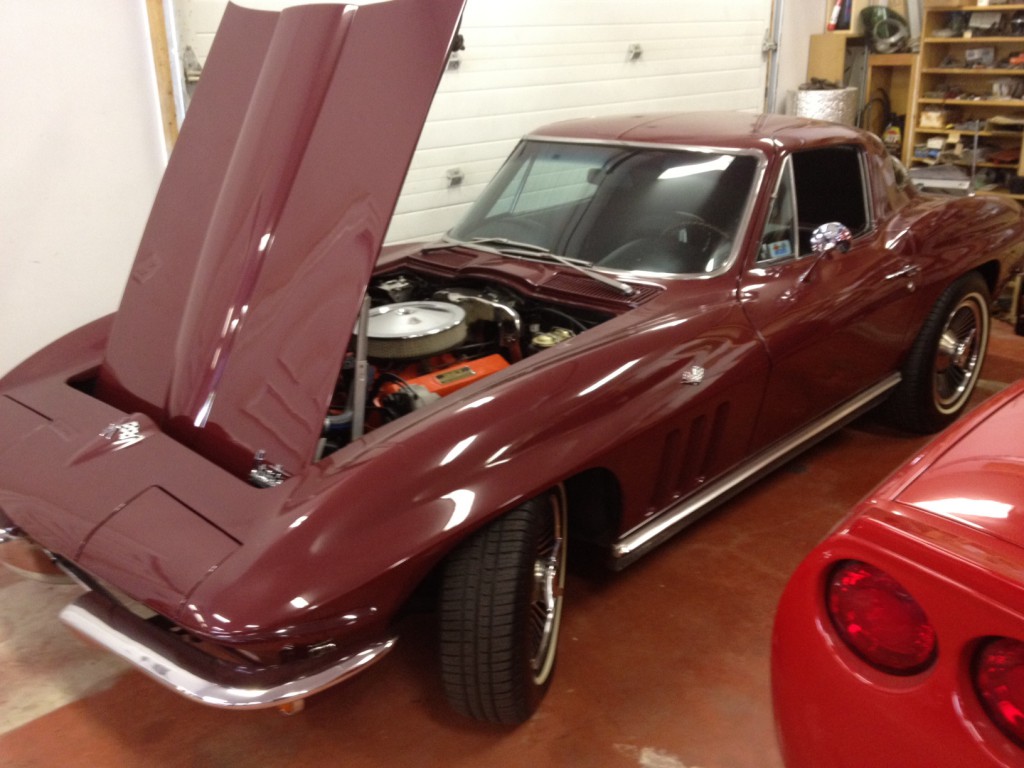 I couldn’t believe it, but we were all so taken by the Vette trio that we somehow missed and subsequently ignored another legend. There was a late 90’s Porsche 911 Turbo Cabriolet. This was the owners third daily driver to go with the Benz’s. Although it was noticeably driven a lot, and in a bit of rough shape as a result, it was very much an eye-catcher all the same. 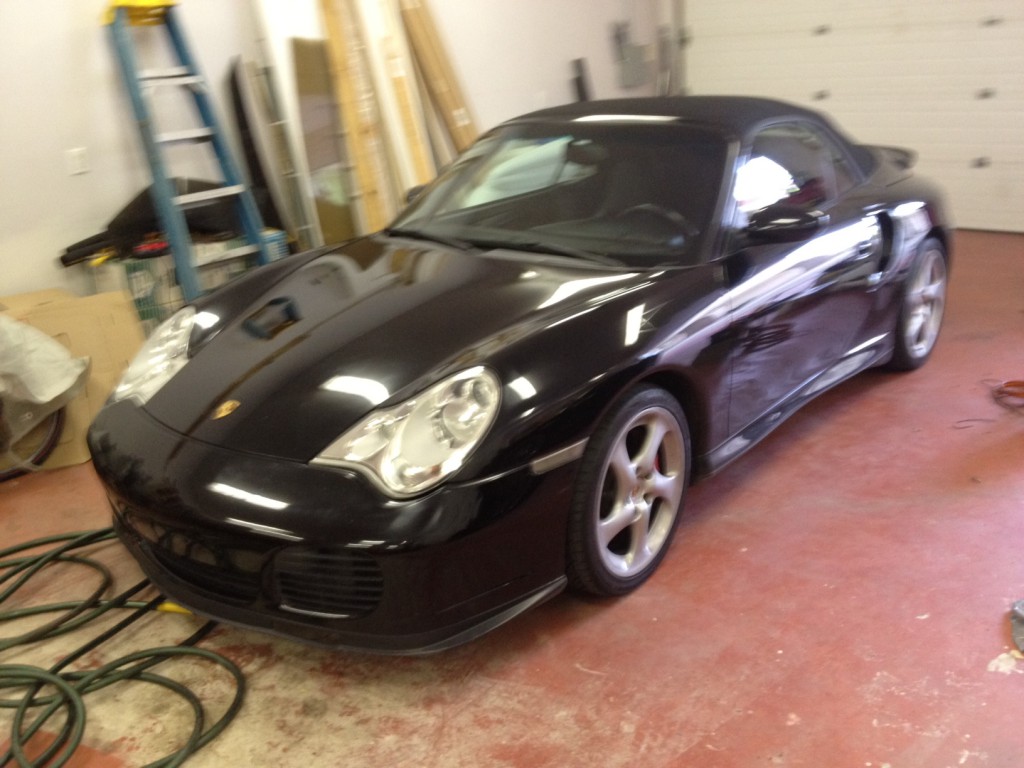 It was actually at this point when I started to get nervous. The Countach was no where in sight. Perhaps we came at the wrong time and it was in the shop? Nope, it was tucked away in a tight corner next to the 90’s Corvette. The reason why no one noticed it before was because it had a car cover on it and because it was so low that even the Corvette eclipsed it.

Then, like a magician at the end of an act, the owner whipped off the car cover with gusto as if to say “ta daa!” and there she was. Not a sound was uttered, not a word was said. All that could be heard was the buzzing or a passing house fly. All four of us just stood there staring at it. It was like meeting your favourite celebrity in real life.

After getting over the initial shock of what was parked before us, we berated the awkward silence with a host of “Whoa!” “Crazy!” “Are you serious?” “Amazing!” and perhaps threw in a few explicits of dumbfoundedness and approval in between. It was so low. So wide. So gorgeous. 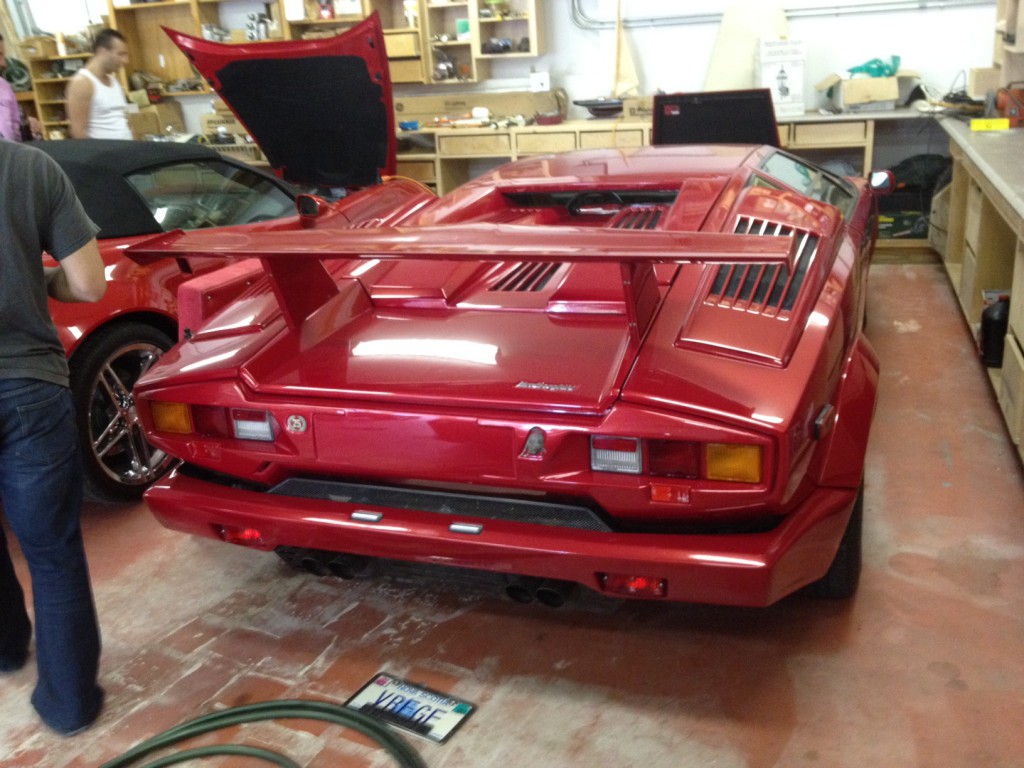 Those famous alloys. They are deeper than I expected. Those rear tires are probably the widest I’ve seen on any production vehicle. That rear spoiler. It’s probably the most obnoxiously large spoiler I’d ever seen, but on a car with this sort of design, it works perfectly. That engine. I can’t get over how massive that V12 is. Myself and Lee spent a good while trying to even figure out the mechanics of it. It was just so fantastically impressive that we just had to figure out what each component was and what it did.

Unfortunately, this Countach was disconnected from its battery so we couldn’t start it up. We did, however, have the opportunity to sit inside. Every single one of us struggled to actually get in. This is the most difficult car for anyone of any height and any stature to step into. The fact that the door hinges didn’t work on the signature scissor doors didn’t help, so it was a two person effort. One holds the door, while the other tries to bend their body like origami to get inside. But once in, it’s absolutely brilliant. In fact it’s endearing 80’s design left me swooning, being an 80’s baby. I remember hearing (for better or worse) “Wake Me Up Before You Go-go” on the radio as a kid and pictured that playing in the background while blasting through country roads in the Countach. In fact, I became so involved in my fantasy that I starting to push in the clutch and change the gears. It was then when I realized how raw this car really is.

While I’m by no means a body builder, I’d like to think that I’m capable of a fair amount of strength when I really need it and boy, was shifting gears one of the toughest things I’ve ever experienced in the Countach. Even pressing and depressing the clutch involved quite the workout for your calves. All that combined with the near impossible outward visibility, the fact that you’re pretty much lying on your back and that big V12 engine made me conclude that this car would truly take a lot of skill to tame. 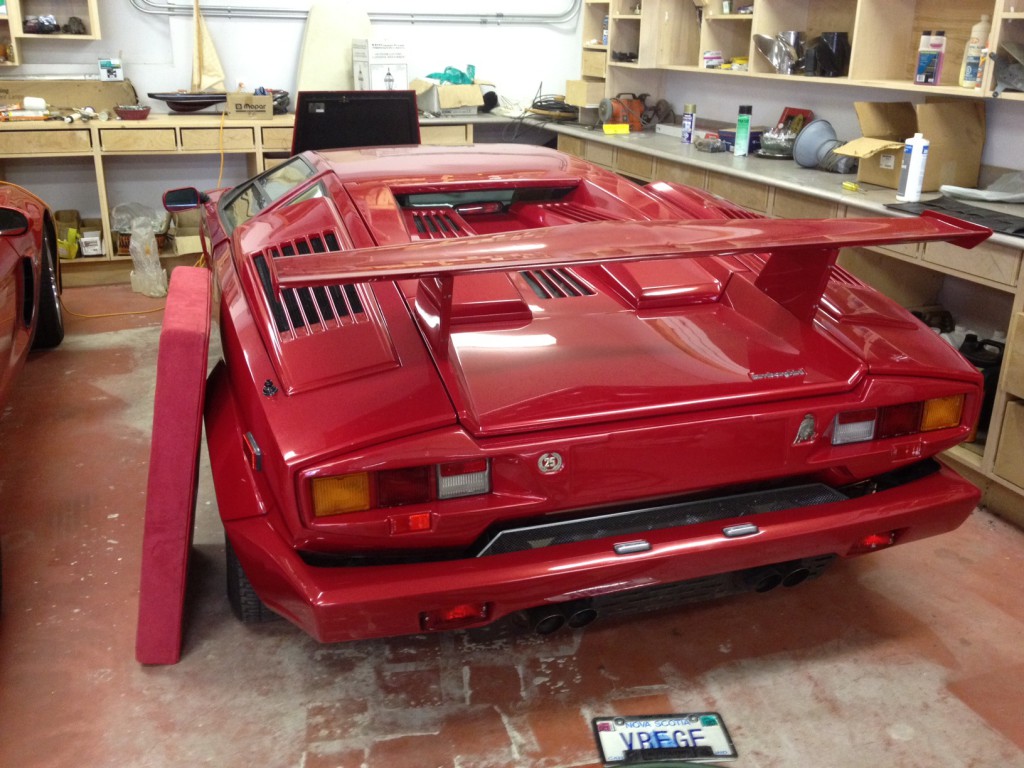 As I exited in an even less dignified way than when I entered, I just had to step back and take it all in. I actually sat in one of my boyhood fantasy cars. Words just could not express the feeling. This truly is a magnificent piece of machinery.

Except it isn’t. It’s rubbish.

The Countach was notorious for not only having an impossibly difficult clutch and gearshift, but steering to match as well. The visibility out of the rear did you as much good as letting a rabid dog have its way with your gentleman’s area. It was therefore impossible to park and impossible to know when the police wanted you to pull over, which obviously would’ve been an inevitability with that V12. The ride was terrible. It took 100% of your concentration to get it around a corner. You couldn’t get in or out of it without looking like a knob.

But I don’t care about any of that. As it was, there in the garage, it was absolutely brilliant to my mind. It’s one of the most iconic automotive designs in history. And I wanted one badly when I was 5 years old.

Never in my wildest dreams did I expect to see one in the flesh, let along spend so much time with it.

This, my friends, was true automotive bliss without even driving a centimeter.

Excuse the poor quality of the pics. In my haste and excitement to capture everything, I didn’t double check for quality!