Whenever I get asked which car company seems to have improved the most over the past ten years (yes, people actually ask me that), a number come to mind with Ford being among the top three.

The thing is, with Ford’s latest development for the smallest car in its portfolio, the Fiesta, I think they got it a bit backwards.

You see, Ford decided to improve the efficiency of the small hatchback. Nothing wrong with that, right? Most people buy small hatchbacks with fuel efficiency in mind after all. So Ford gave it an EcoBoost 1-litre, 3-cylinder engine (yes, you also read that right) with the mind set that less engine equals more gas savings. That makes sense.

What doesn’t make sense is what the 1-litre Fiesta ultimately turned out to be. And it’s not necessarily a bad thing. 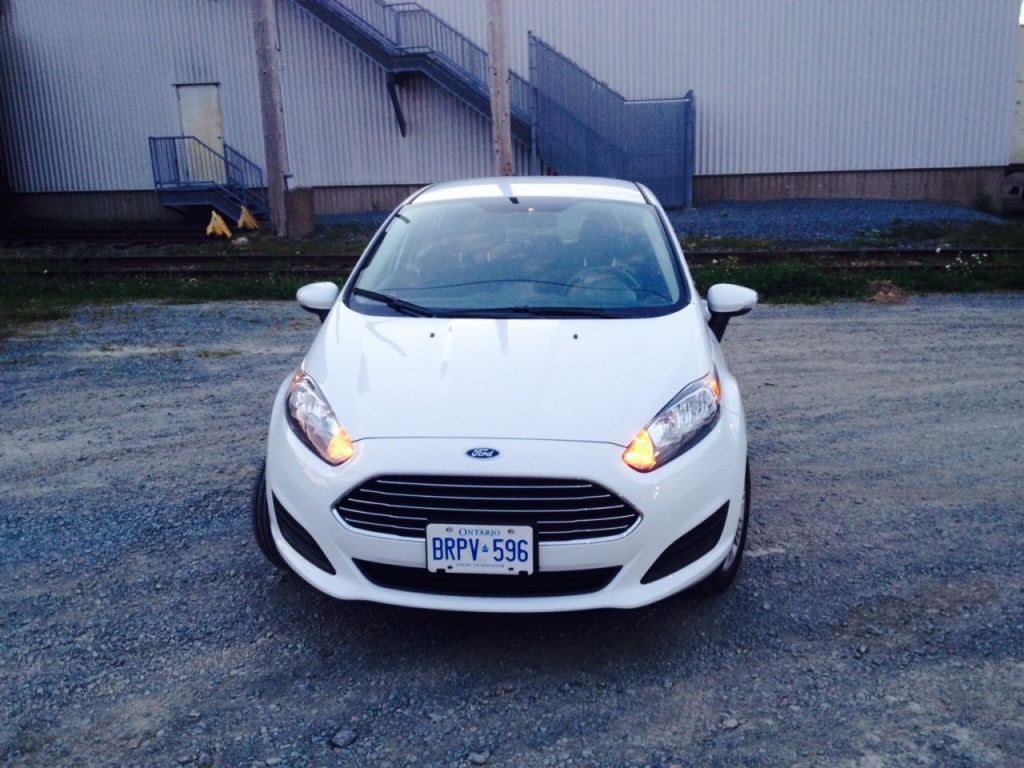 Before I get into that, let’s take a look at the Fiesta’s style. The facelift with the larger, oft-referred to as an “Aston Martin” styled grill gives the Fiesta a mean little mug. Otherwise, it’s pretty much the same Fiesta you’ve seen around town several times; there’s nothing to let anyone know you only have 1-litre worth of engine under the hood. The only giveaway is the discreet badges. The rather uninteresting hubcaps are the only thing I can point to that needs improvement looks wise. 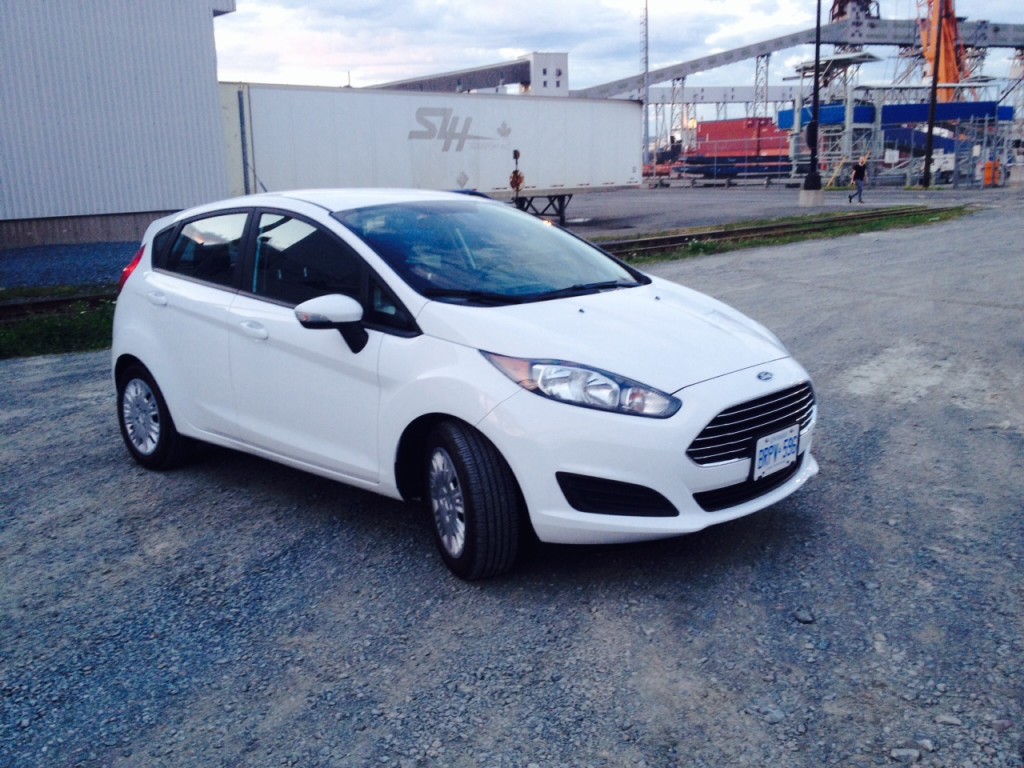 The interior is generally a nice place to be, however at night the Fiesta produced some odd red ambient lighting inside. During my week with the car, I shuffled several passengers. All collectively were put off by it.

“Why would they want to me to see my own feet and why would they show them in a creepy devilish hue?” a friend of mine wondered aloud.

I suppose this sort of thing is subjective, however it borders the line of Ford trying too hard to be hip. Overall, friends and family enjoyed their time inside, despite tighter interior room than most of the Fiesta’s competitors. I wasn’t a huge fan of the rather tiny digital display screen which took a rather deep cavernous trek towards the engine bay, but overall the interior felt of good quality. 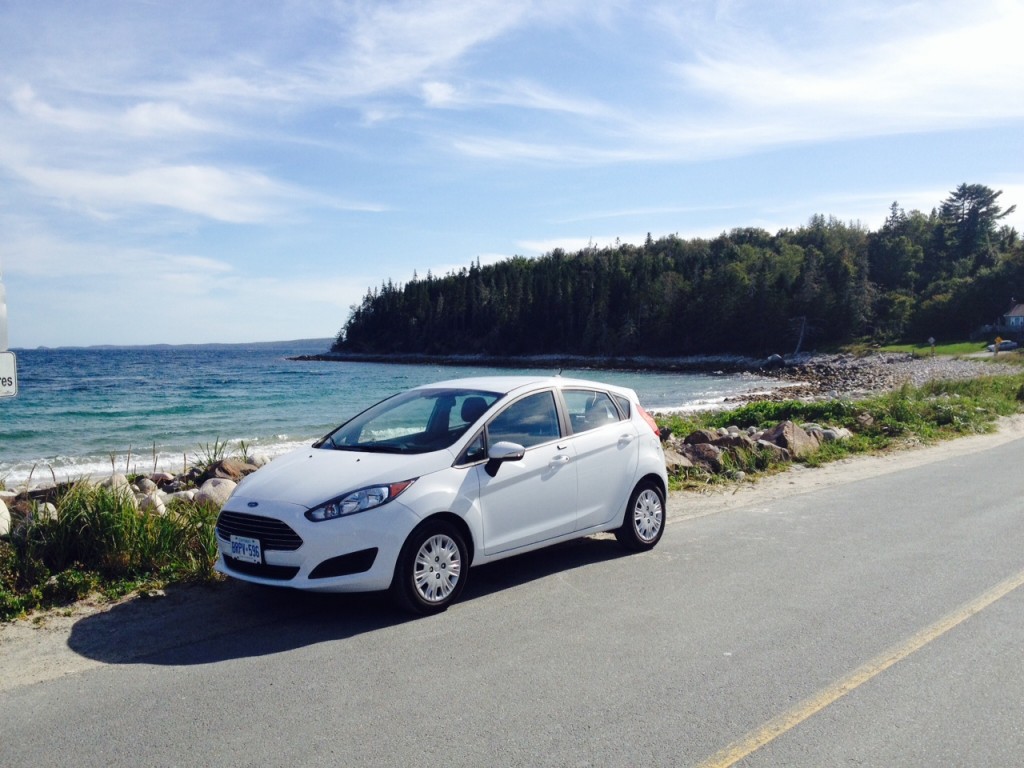 Now, let’s get to that engine. As mentioned, it’s a 1.0 litre, 3-cylinder unit which produces 123 horsepower and 125 pound feet of torque. Those numbers aren’t bad at all considering the puniness of the engine and considering Mitsubishi can only get 74 horsepower and with matching torque out of its three cylinder. But the EcoBoost has a party trick in the form of, uh, boost. It has an over boost feature which actually boosts torque up to 148 pound feet. Boost for the win! Okay, I’ll stop saying boost now. 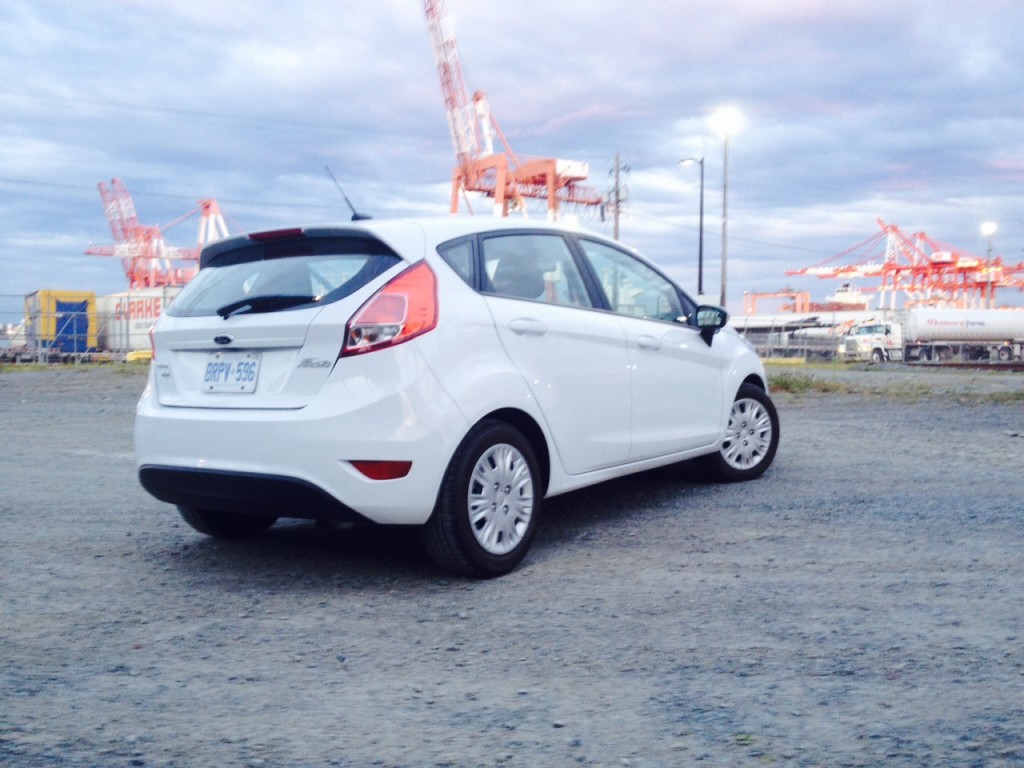 But the end result is a rather zippy and fun-to-drive little car, especially since the Fiesta in SFE trim only gets a 5-speed manual transmission. This allows you to take advantage of what this little engine is actually capable of for some red lining fun. The only downside is gear shifts are about the length of a football field and it feel quite notchy and not in a good way. You do get used to it and I’d wager it would make a good car for budding teen car enthusiasts to learn how to drive stick. On top of that, there is some noticeable lag when you put your foot down as well. Still, the Fiesta feels like a little hummingbird (which is quite literally true at lower speeds and idle as there is a strange humming sound coming from the engine bay). 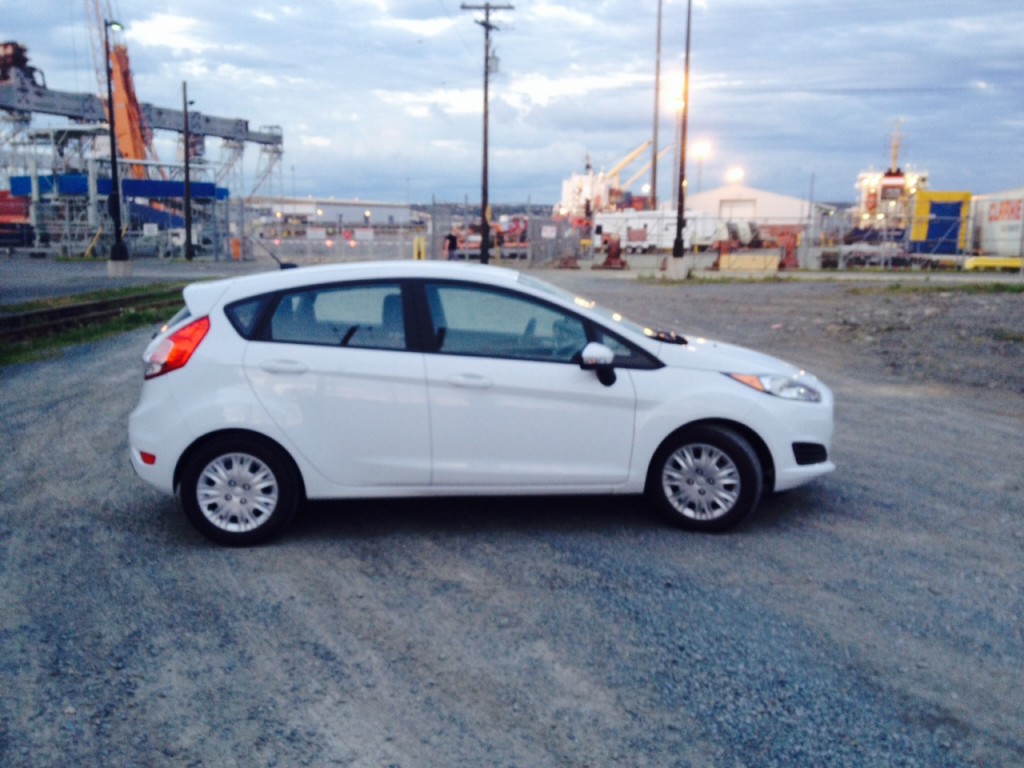 But why not just get the 1.6 litre engine found in the ‘regular’ Fiesta, you say? Well, that engine makes 120 horses with similar torque numbers and it just doesn’t want to rev as much as the 1.0 litre does.

But what about fuel consumption – that’s the whole reason for the Fiesta SFE’s existence after all – and officially it gets a rating of 7.5 L/100 kms city and 5.5 L/100 kms highway. Wait, what? Those numbers seem pretty high for a small little hatchback, especially one that is specifically set up for fuel efficiency. My real world driving returned 6.7 L/100 kms in mixed driving which is about the fuel consumption numbers you’d get out of the Fiesta’s bigger brother, the Focus. What gives? Well, believe it or not, all the time and effort put into making the Fiesta more efficient actually has paid off, despite the disappointing numbers. A ‘regular’ Fiesta is actually rated at a ridiculous 8.5 L/100 kms city and 6.5 L/100 kms highway. So there is some improvement for sure, but that’s a bit like saying, “I lost 100 pounds!” when you still weigh 400 pounds. 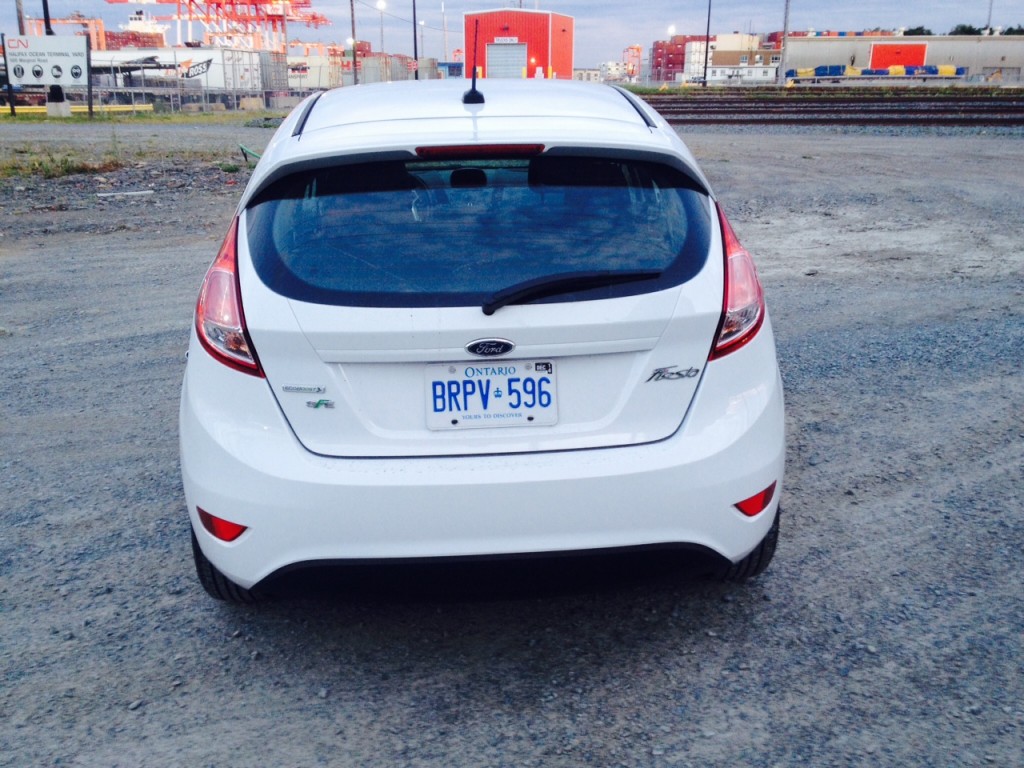 But the SFE is far from feeling like a 400 pound human and is quite tossable in the corners with minimal body roll, but under steer will rear its ugly head if you get a little too carried away. I haven’t had this sort of fun in a small economy hatchback since the original Honda Fit.

And that brings me back to my original point. Ford missed the mark with this one; and its being marketed completely backwards. Despite not measuring up in terms of good fuel consumption, the Fieata EcoBoost SFE is still fun to drive – even more fun to drive than the 1.6 litre Fiesta thanks to that over boost feature and manual transmission only. 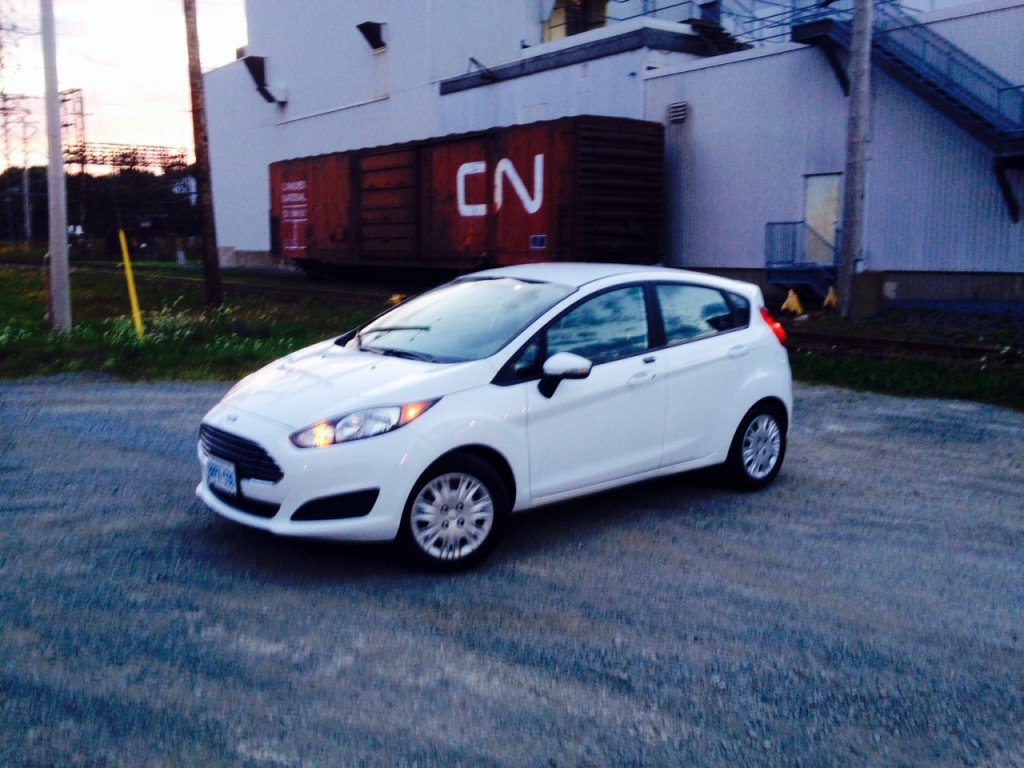 Instead of touting the EcoBoost SFE as a fuel miser, Ford should really be marketing it as the poor man’s Fiesta ST. Okay, that’s a bit of a stretch, but it really is an entertaining car to drive.

After all, it’s more fun to drive a slow car fast than a fast car slow.