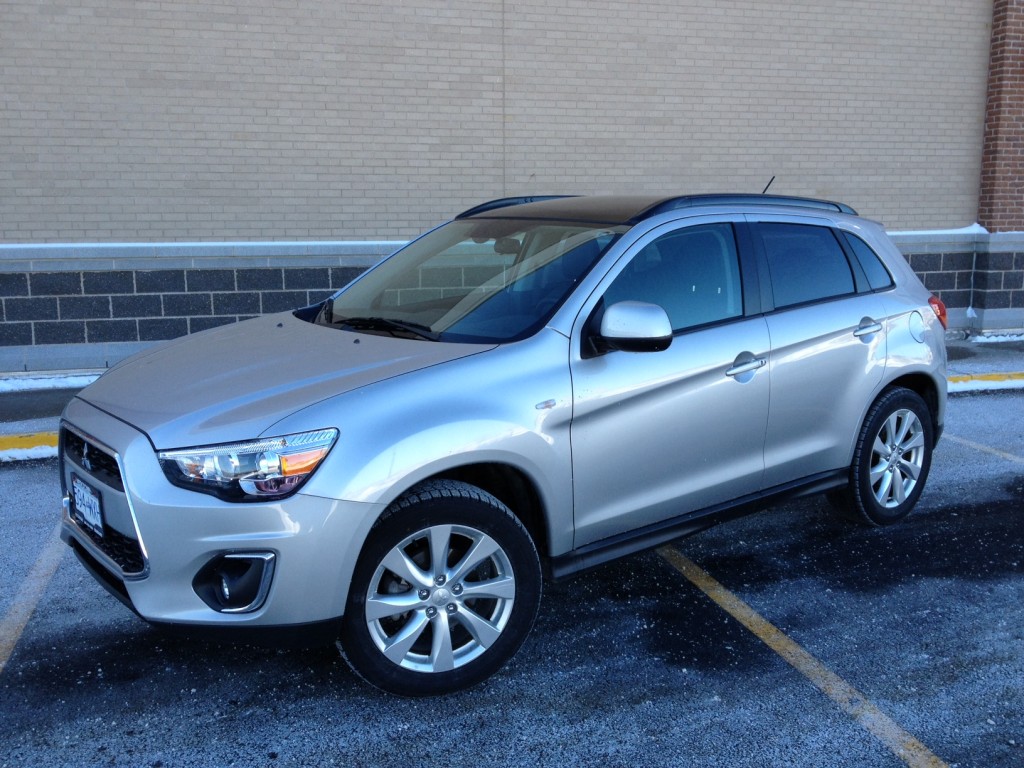 Did it mean I had a nice smile but poor customer service skills? Did it mean that I had the strength necessary to haul boxes and stock shelves, but wasn’t good at making them look presentable? All sorts of questions raced through my mind.

After spending a week with the Mitsubishi RVR, I was reminded of that time in my life. Except in this case I was the evaluator and the RVR was in the unfortunate position of being evaluated.

My conclusion was the exact same as my former manager’s conclusion: It’s a good news/ bad news sort of thing. 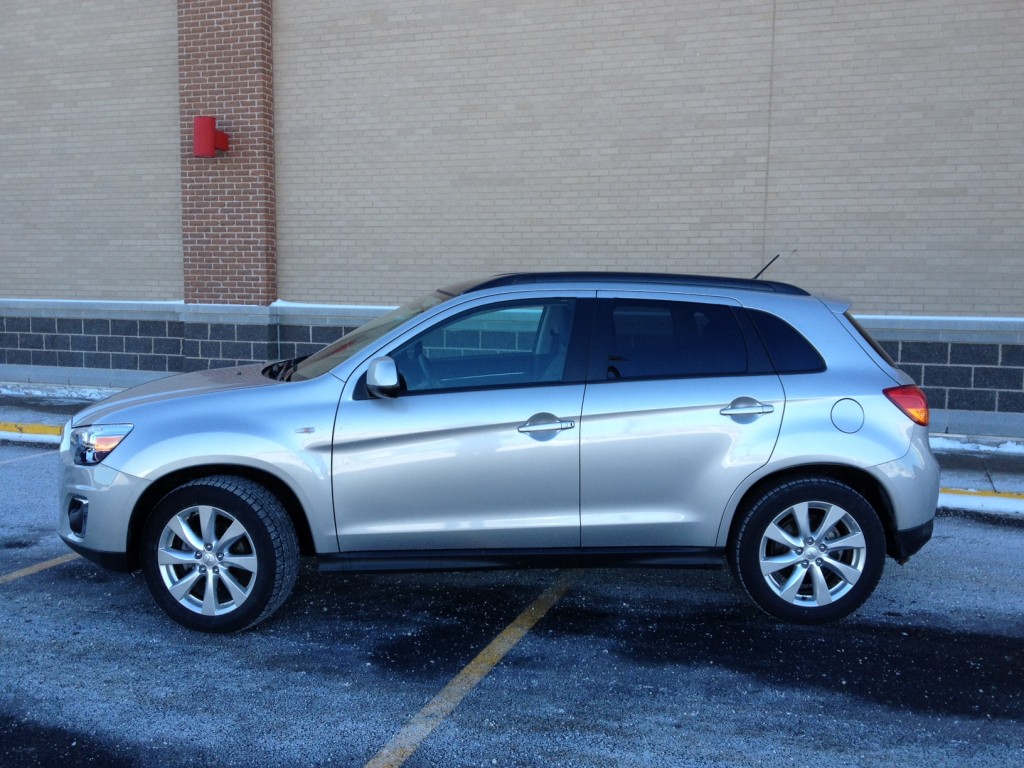 The Good: The styling of the RVR is generally quite agreeable. The blunt aggressive front end is definitely unique to the brand and although it may be polarizing to some, it definitely has a menacing presence on the road, which is likely due to the fact that it largely takes styling cues from the iconic Lancer Evolution. For 2013 the RVR gets extremely minor revisions with redesigned fog lights, reshaped front and rear bumpers and a new grille design. Only a trained eye would be able to spot the difference between a 2013 and a 2012.  Overall the appearance is attractive and cannot be mistaken for anything else on the road. 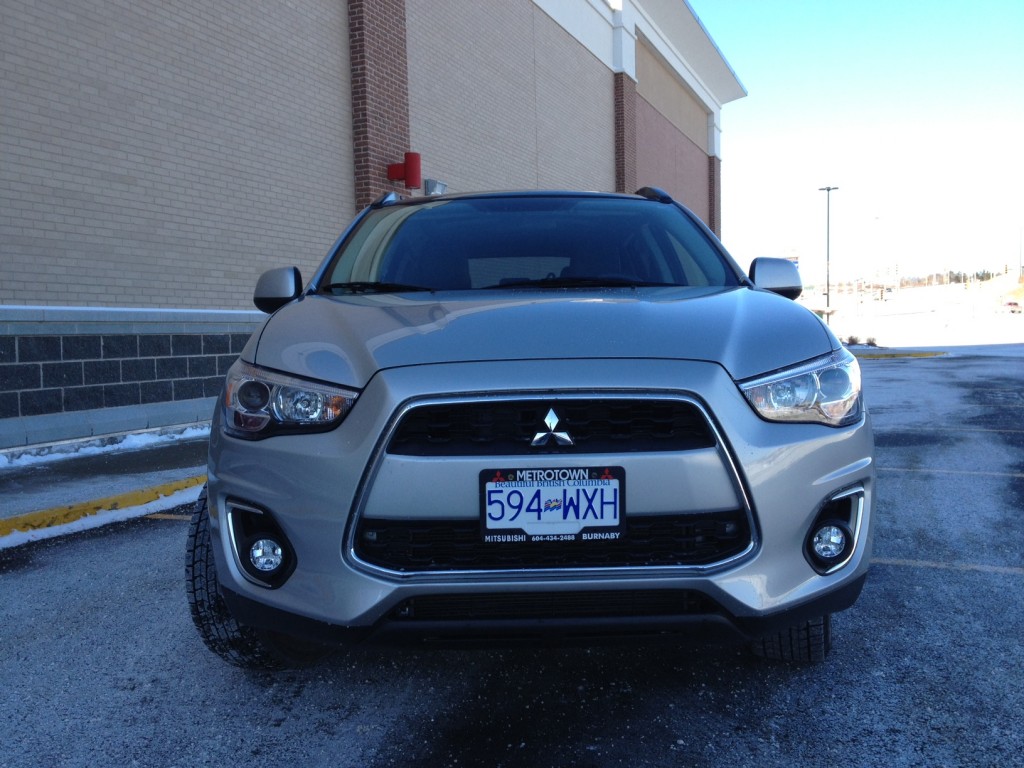 The bad: While my top of the line tester came fully loaded with all the kit you’d expect and more, for some reason the interior seemed uninviting. Usually I’m a fan of black interiors, however this interior made the RVR seem a tad low-budget in its design. There’s nothing about it that makes it unique and there’s nothing that is particularly innovative. That said, this is the first time I’ve been in a vehicle that has had LED strip lights which line the massive glass roof. The reflect off the glass to give a rather distinctive look. Except for the fact that it isn’t really all that distinctive. For the longest time I was trying to figure out what the look reminded me of and then my sister nailed it on the head. They are reminiscent of the lights on the side of a limo. On top of that I don’t think I’ve ever experienced a vehicle that put the heated seats in such an odd and hard to reach area. The switches are squeezed in between the seat and the parking brake. See the picture below to see what I mean. 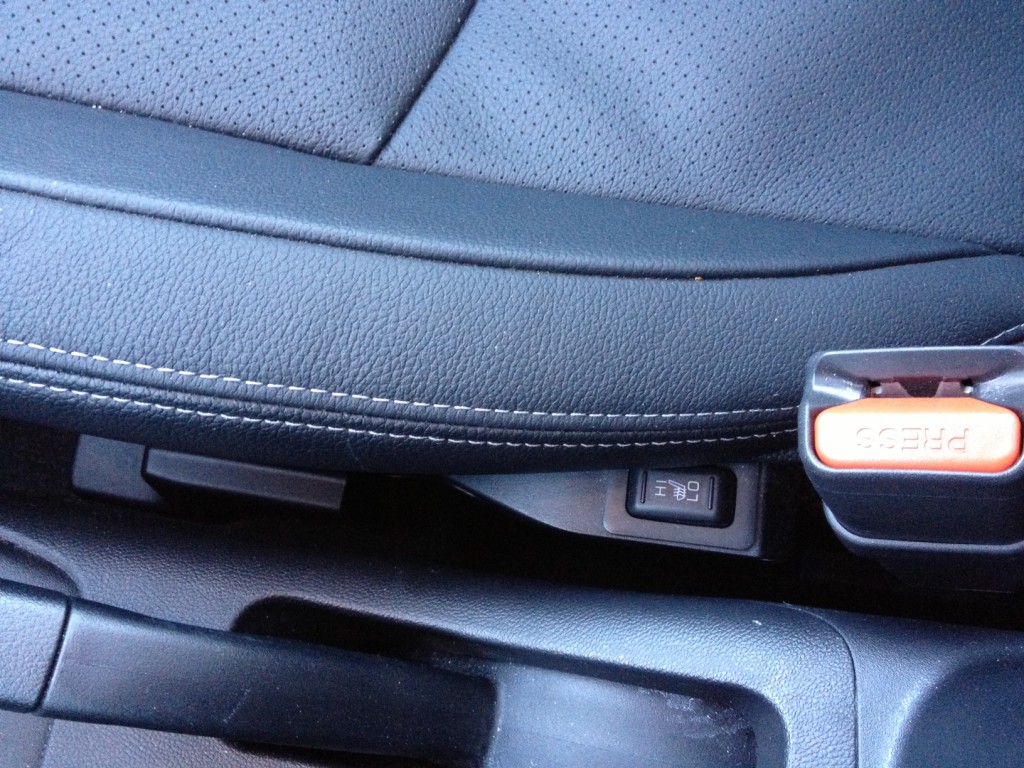 On top of that, you can actually control the leveling feature of the rather nice HID headlights yourself. Most auto manufacturers offer this as an automatically controlled feature. Having the option to do it manually is a bit odd. Since most vehicles don’t offer this feature it likely would rarely get used. I used it once for the mere purpose of trying it out. Once that was complete I didn’t see a need to do it again. Rear sear legroom can be tight and as my brother in law demonstrated, head room is rather tight, or almost non-existent . The seats aren’t as comfortable as the front seats are. 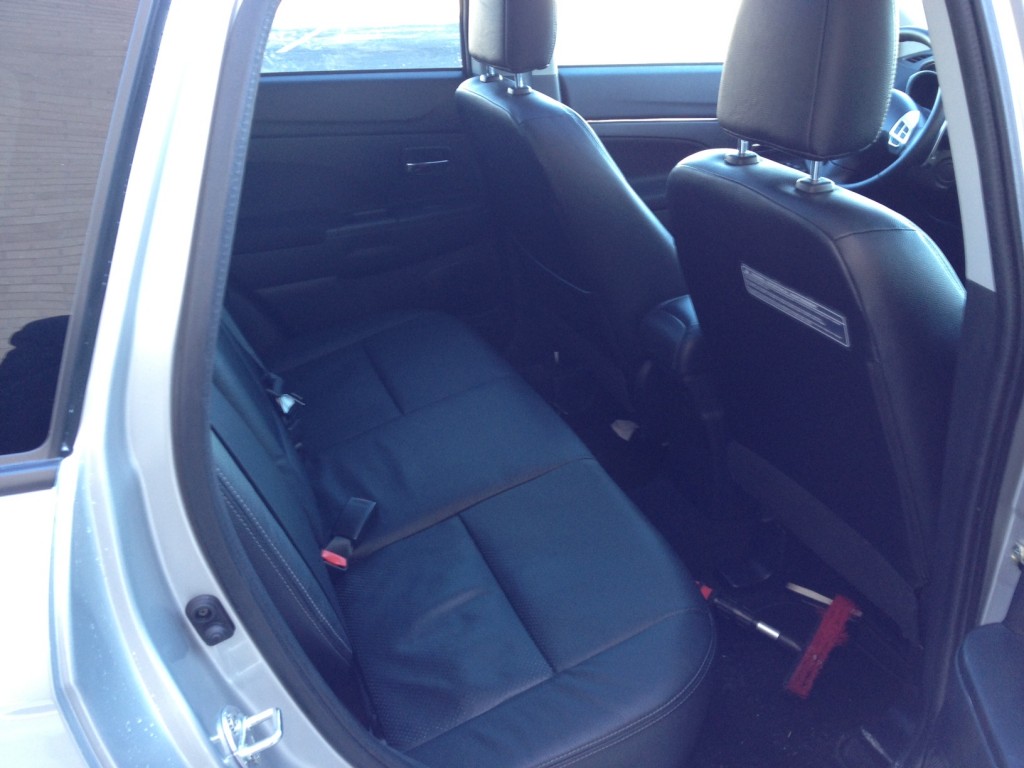 Now, while I can easily point out the bad with the interior but it’s also just as easy to point out the good as well. Even though the interior design isn’t impressive, the quality of materials is. Fit and finish is quite good and even though the layout is quite traditional, it does the job well. All the buttons and dials are where they should be, however I must admit not having a dial for the volume took some getting used to. The display screen in the centre stack is a decent size with a clear font, however it gets washed out almost completely when the sun shines through that massive glass roof. The gauges are clear and conservative, which is good.  The audio system might be among the top five I’ve experienced. It has anine-speaker, 710-watt audio system with subwoofer which means you can really belt out your favourite tunes. That subwoofer doesn’t impede on cargo room too much either with the RVR’s very competitive 614 liters of cargo room. With the seats up and close to 1,400 liters with the seats down. 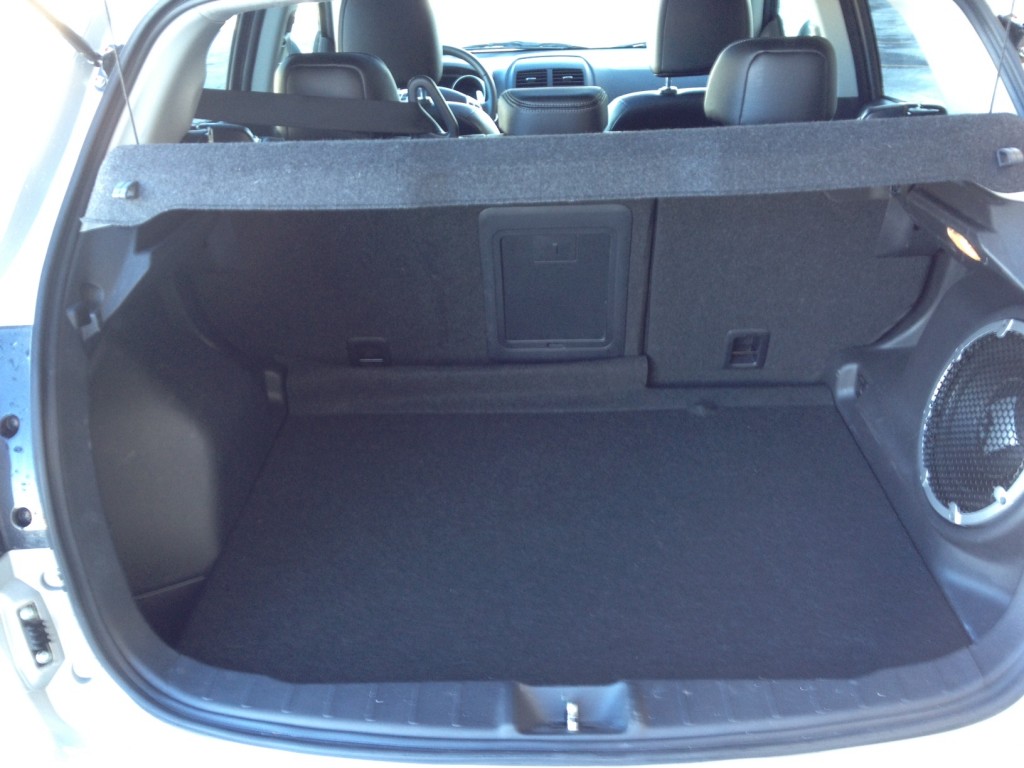 The good: Mitsubishi can do engines pretty decently. It’s part of the reason why they are confident in offering a 10 year power train warranty on all models. The engine equipped to the RVR is a 2.0 liter naturally aspirated four cylinder which makes 148 horsepower and 145 pound foot torque. This is a good engine. 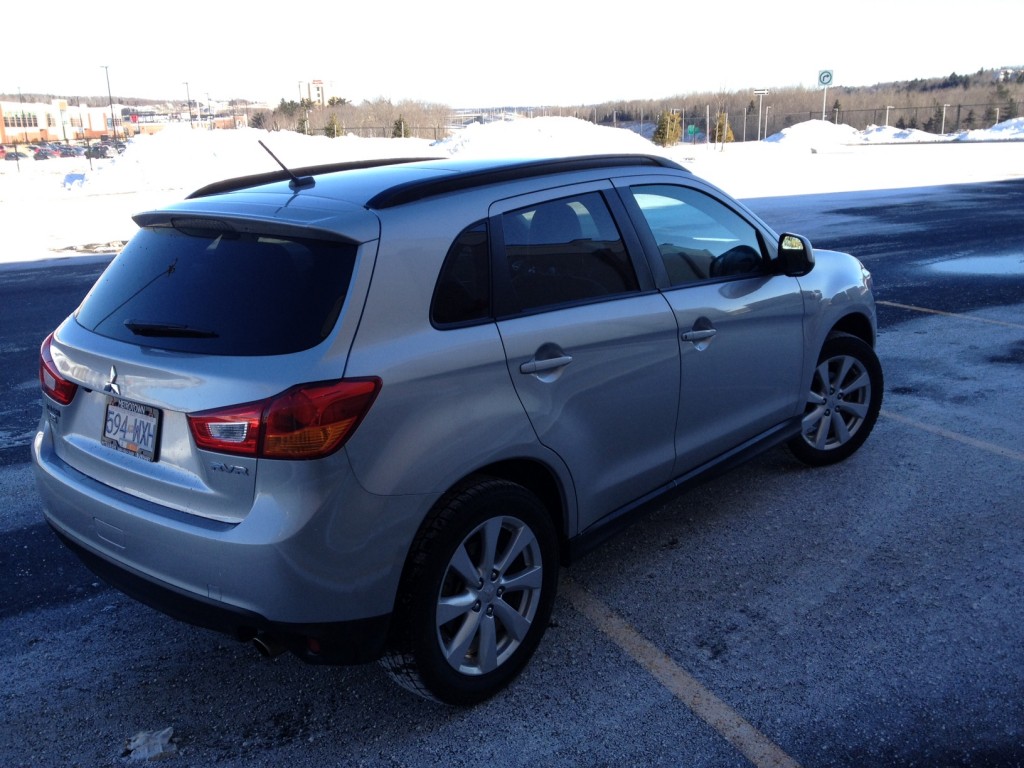 The bad: This engine is mated with a CVT automatic and in my tester’s GT trim level a manual transmission is not an option. Even worse is that the CVT sucks away any power the engine might have had. While this is acceptable in every day driving, in merging onto the highway you can feel the CVT fighting the engine. The end result is a 0-100 km/h run time of 11.5 seconds –among the slowest in its class. On top of that, it’s loud and not in a Ferrari 458 kind of way. Rather in a borderline making your ears bleed kind of way. 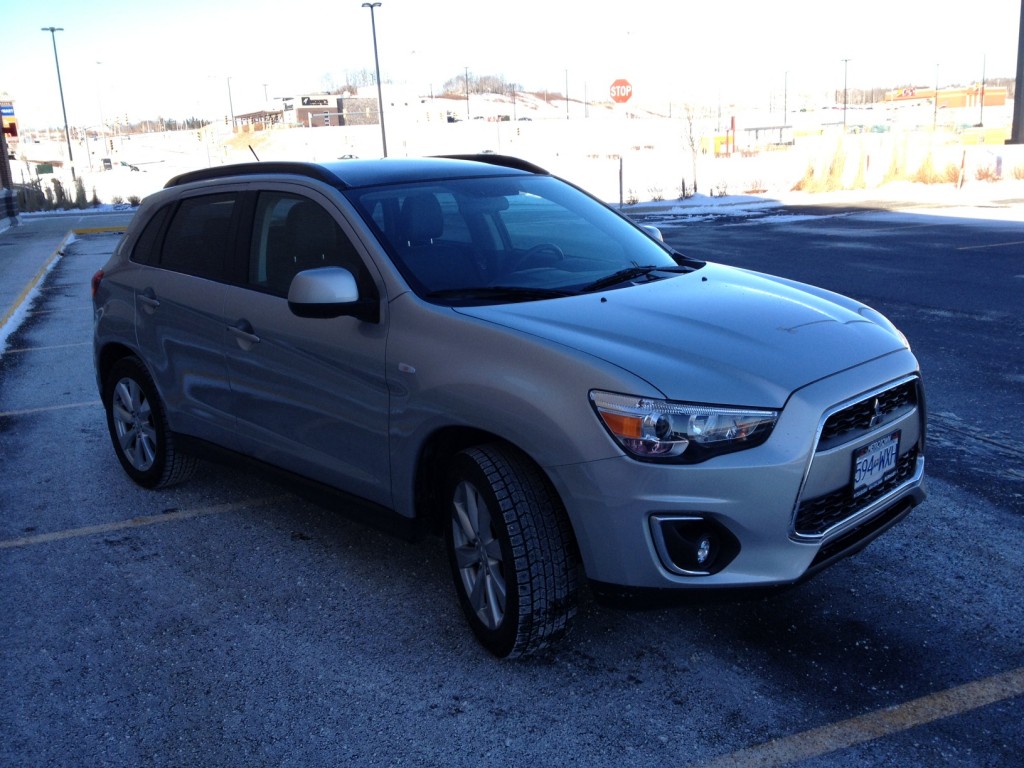 The good: Despite the rather unfortunate engine-transmission combo, the good news is that it does actually work in the way it’s designed to. The RVR with a CVT transmission is rated at 6.6 L/100 kms on the highway and 8.4 L/100 kms in the city. I was able to return around 9.9 L/100 kms in combined driving which, considering how cold it was and the amount of snow we had during my time with the RVR, actually isn’t too bad. On top of that, the RVR makes due with just regular gasoline. 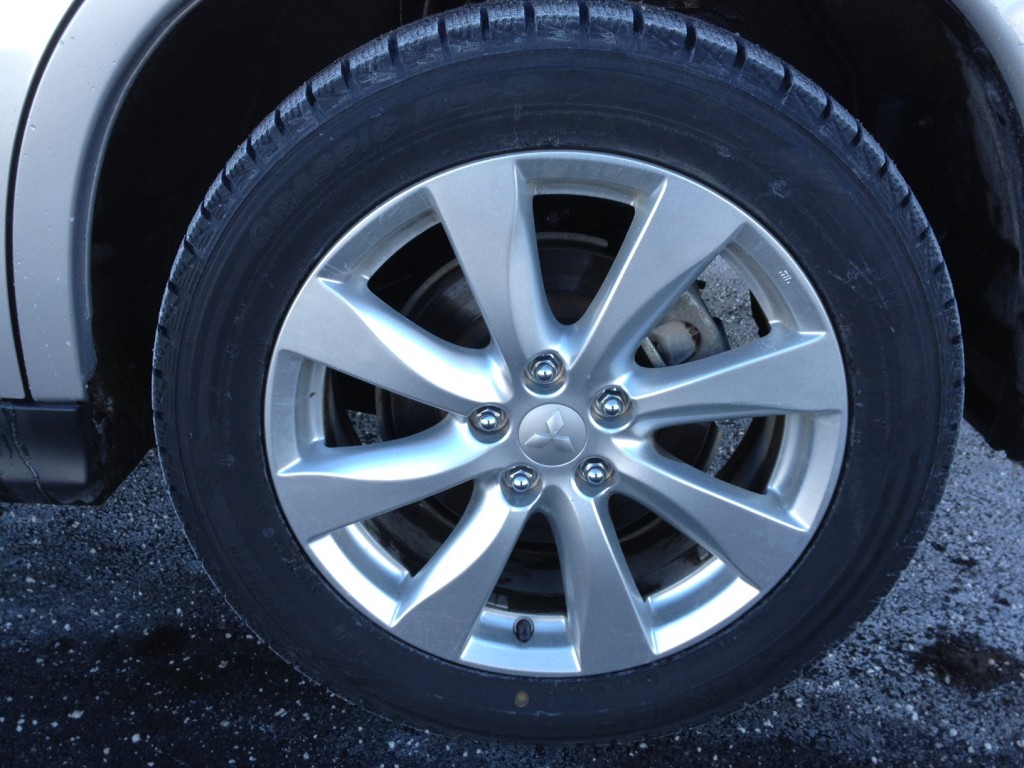 The bad: In the United States, the RVR is actually called the Outlander Sport. Chalk up a win for Mitsubishi Motors Canada for opting to call it the RVR because there is nothing sporty about it at all. In addition to the rather slow 0-100 time, asking the RVR to take a corner with any aggressiveness probably not a good idea. There is noticeable body roll and the RVR tends to under steer more often than not. 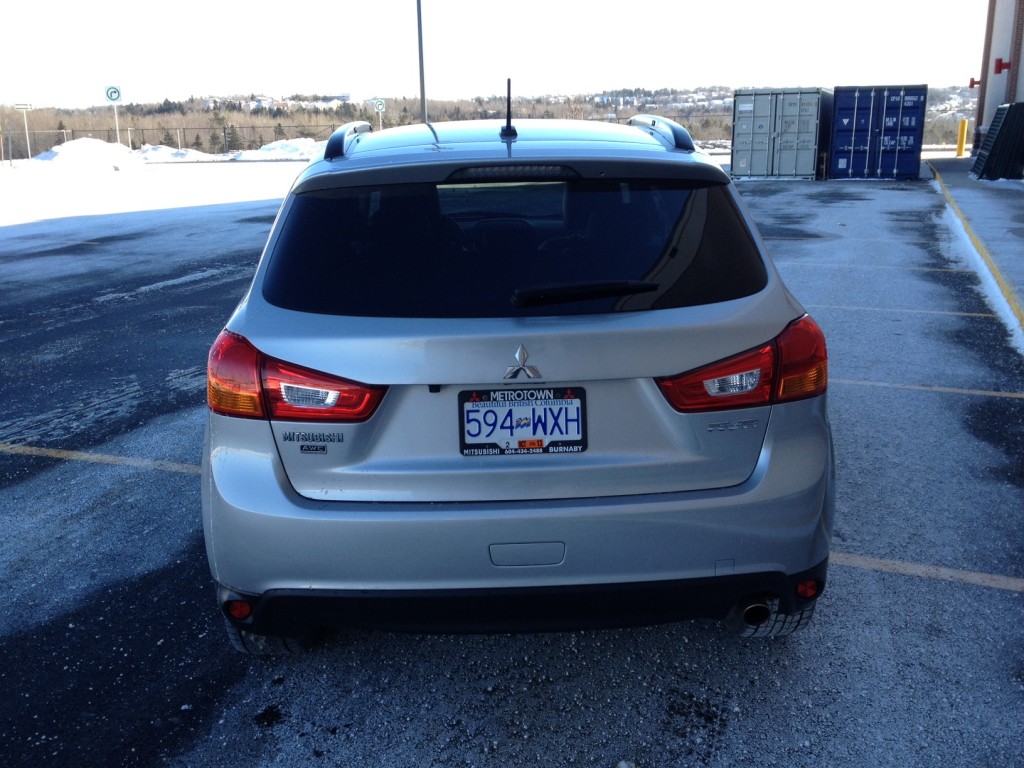 The good: despite the mediocre handing abilities, it is actually an improvement. I remember I had the chance to take a quick drive in a 2010 model RVR a while back and the suspension tweaks to the 2013 model are noticeable, they’re just not quite there yet. They are on the right path though. And when the RVR does get out of sorts in the bends, the electronic all-wheel drive system chimes in to keep everything in check. One of the things I really like with this system is the old-school ability to go between 2-wheel drive, 4-wheel drive and 4-wheel drive lock. A lot of the RVR’s competitors offer either 2-wheel drive only or a 4-wheel drive Haldex system which means the vehicle is largely 2-wheel drive until it detects wheel slippage. To make things even better, you can cycle through all three drive train settings with just the push of a rather large button near the hand brake. It’s quite seamless and I found myself grateful for it as I cycled through effortlessly depending on changing weather on road conditions.

The good news on the drive continues as the RVR’s HID headlights provide crisp clear lighting of the road ahead and the overall ride feels quite stable. The heated seats heat up quickly and the ride is generally comfortable when the RVR isn’t pushed. In other words, if you drive the RVR the way 90% of people normally would, it does quite well. 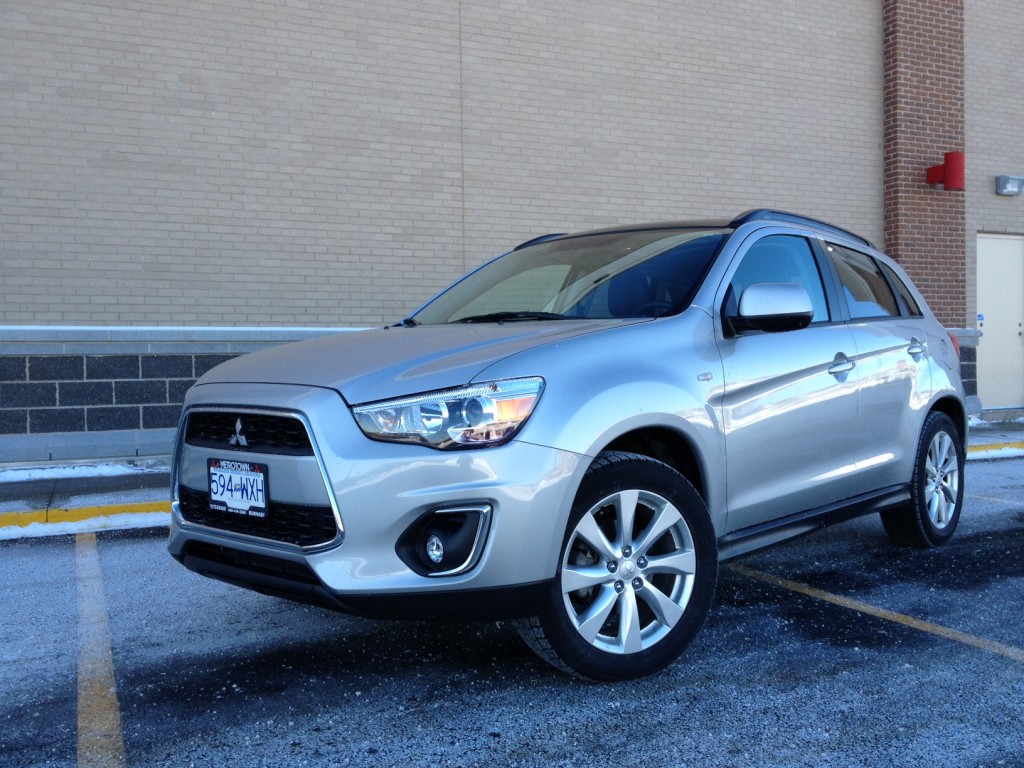 In the end, my performance evaluation from the liquor store actually turned out to be quite good, in spite of my manager proclaiming the ‘good news, bad news’ comment from the start. The only bad news  out of the whole performance review was that, despite my rather impressive performance in stocking shelves, I was told that the particular location where I worked at was closing down for good. And I must say, I really hope this doesn’t end up being the case for the RVR or Mitsubishi in general in Canada. Sure the RVR has its faults, but it is an alternative to an ever growing melting pot of a segment. It dares to be different. And Mitsubishi as a brand dares to be different as well. However the rumours have been rampant for a while that Mitsubishi will close its doors in North America during poor sales. But the RVR proves that the brand has at least some potential and that it is trying. That combined with unbeatable warranty, unique styling and decent value means that it’s just a matter of time before Mitsubishi’s product reviews go from a “good news/bad news kind of thing” to just a “good news kind of thing”.