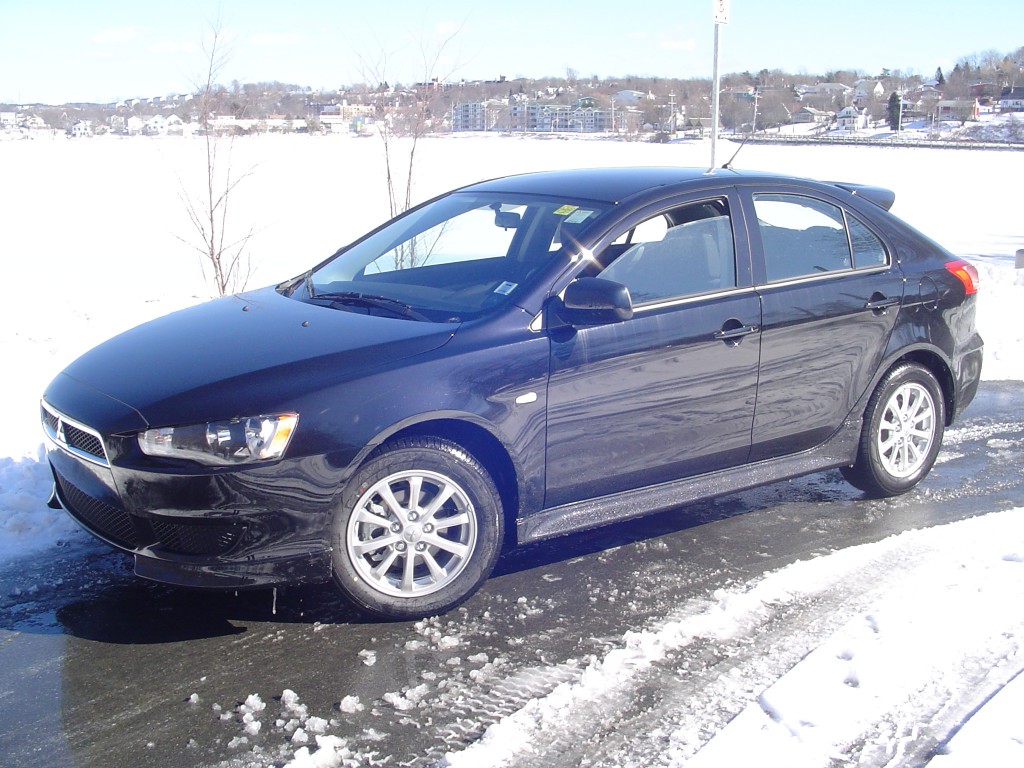 You’ve probably heard by now that Mitsubishi has apparently decided that this generation of the Lancer Evolution will be the last that it will build. Now, this is quite tragic. Aside from the fact that the Lancer EVO is the best car that Mitsubishi makes and can make cars that are tens of thousands more money sweat on the track, there is another reason why this is a bad idea.

To help prove my point, let’s play a little word association game. What do you think of when you hear the word ‘Montreal’? If you said, the Canadians, strip clubs, poutine or terrible roads, you’d be right. How about when you hear ‘Charlie Sheen’? If you said Two and a Half Men, terrible actor, terrible haircut, manic depressive or coke head you’d also be right. All those things can be associated with Charlie Sheen.

Now, what about Mistubishi? If you said EVO and couldn’t think of anything else, well don’t feel bad because I’d wager a lot of people wouldn’t be able to come up with much else either.  And that’s my point. Mitsubishi killing off the EVO would be like Chevrolet killing off the Corvette. What would they be left with?

But Mitsubishi is pretty adamant that their new direction be focused on fuel efficient vehicles and there’s nothing wrong with that necessarily, especially since fuel efficiency isn’t an area where the EVO excels. But what kind of brand would Mitsubishi be without the EVO? Surely the regular Lancer would be able to hold its own?

I tried a Lancer Sportback SE to find out. 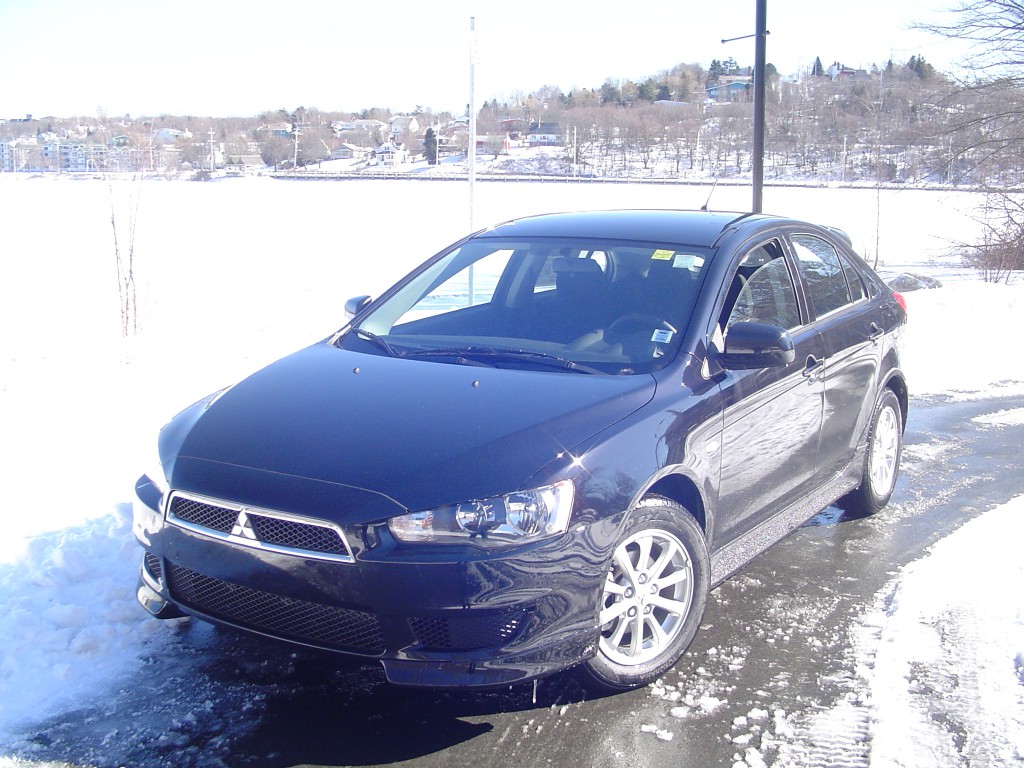 If you remember the previous generation Lancer Sportback, you probably remember a wagon (not a hatchback) that had a striking resemblance to a Volvo V70 from the back and a rather awkward stance from certain angles. What’s that? You don’t remember the previous generation Lancer Sportback? Well that’s probably because Mitsubishi barely sold any.  To their credit, that didn’t stop them from trying again with this new generation and it’s much improved looks-wise.  The car is identical to the already attractive Lancer sedan from the front of the car to the rear doors. Then Mitsubishi gave it a proper sportback and voila, you have a Japanese hatchback that looks the part and is ready to take on all your stuff. However there’s one small gripe I have with the design of the tail lights. I’m glad Mitsubishi decided to give the Lancer Sportback amber turn indicators (as all cars should have in my opinion) but man are they ever useless when looking at them head on. They’re barely noticeable. They’re clearly visible when looking at them from the side, which makes sense since they’re wrapped around the body, but there were more than a few times when I noticed that someone had to almost panic stop behind me because they didn’t realize I was turning, even though I had the indicators on. Also the wheels are kind of a boring design and look too small on the car. The optional 18’s definitely help complete the look. 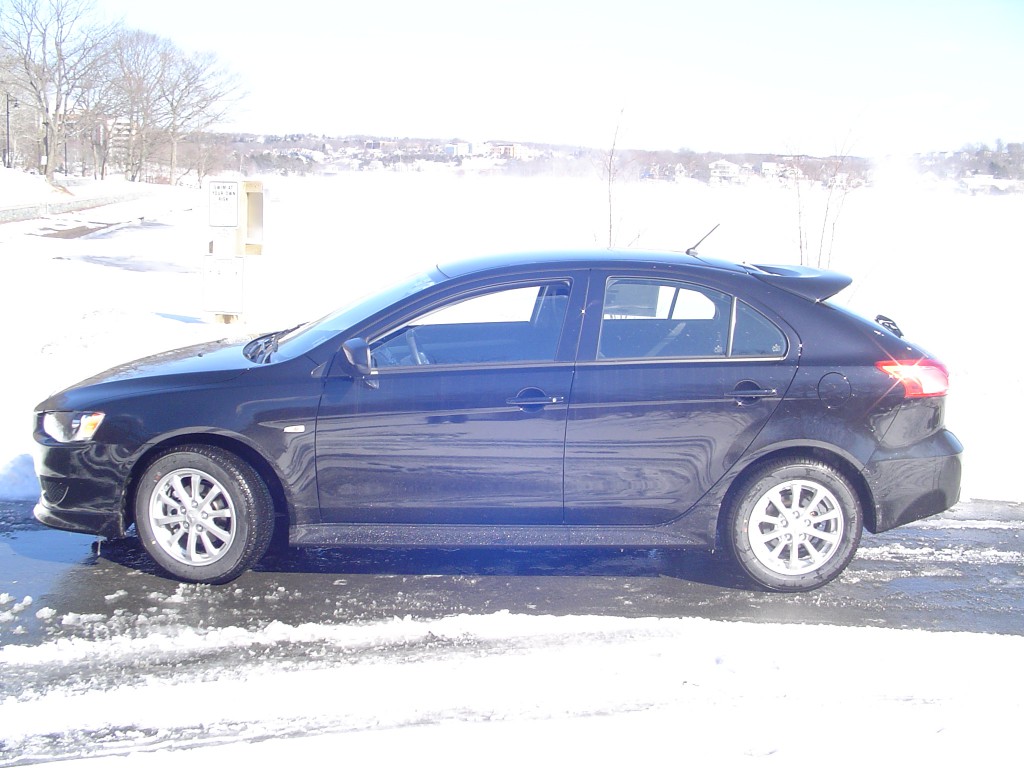 Inside however, there’s some big detail that seems to be omitted. Upon first glance the interior seems decent, but when you actually get in and spend some time in there you realize that there are more hard plastics here than a mannequin. With that said, all the controls are where you’d expect them along with some controls on the steering wheel to help keep your hands on the wheel. Sound quality is about what you’d expect from a car in this price range, but one odd omission seems to be the lack of an auxiliary input. Also, with a salutations message on the dash every time you start the engine and a message that reads “see you” every time you turn the engine off, the Lancer Sportback comes off as a bit tacky. All that combined with wiper spray jets that seem like they can’t be bothered to work adequately and you quickly become reminded that this car is indeed a base car in the low $20,000 range. At least that large hatch is the Sportback’s saving grace. With the seats folding almost flat, cargo room is a good 445 litres of space. 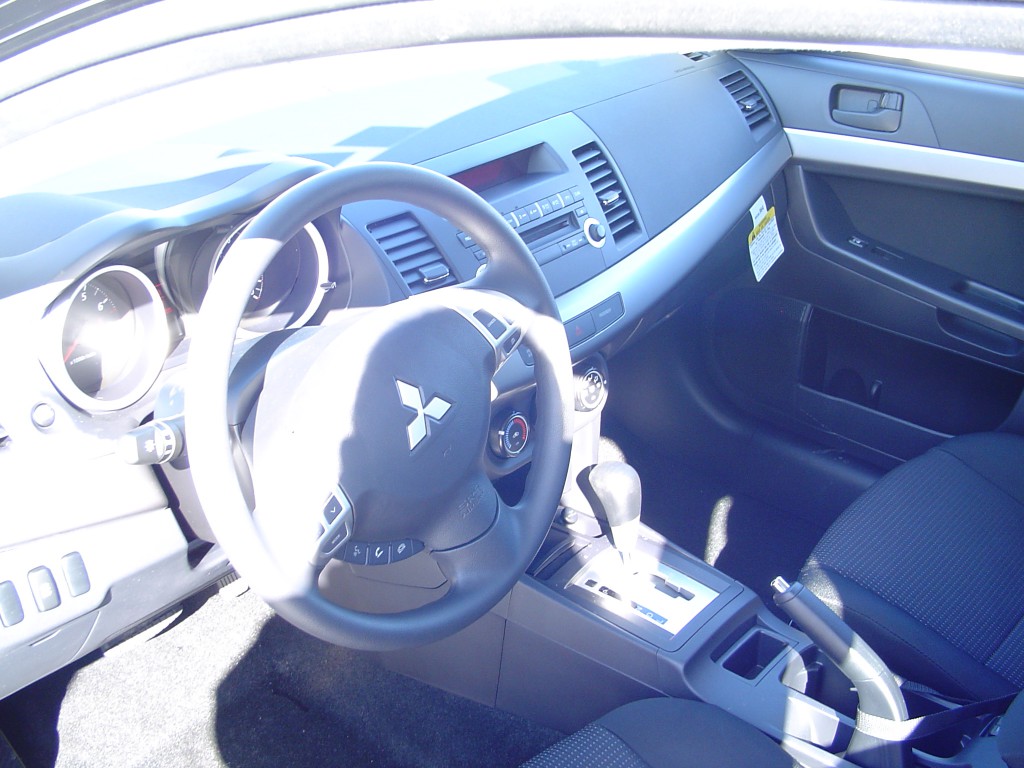 The Lancer Sportback SE gets a 2.0 litre 4 cylinder engine that produces 148 horses and 145 pound feet of torque. This is adequate power for every day driving, but if you’re looking for a bit of EVO-esque thrill from your Lancer sportback, the Ralliart edition is the way to go (it gets a turbocharger that brings those numbers up to 237 horses and 253 pound foot torque). The unit in the SE is far from refined – in fact engine noise is quite intrusive to the cabin and it isn’t even a pleasant sound. It sounds quite buzzy like it’s running on bees or something. The CVT automatic transmission didn’t help either, all while completely sucking the power when pushed hard (CVT’s are made for fuel efficiency in mind).  0-100 takes the same amount of time it takes i to have a baby. It feels pretty slow. 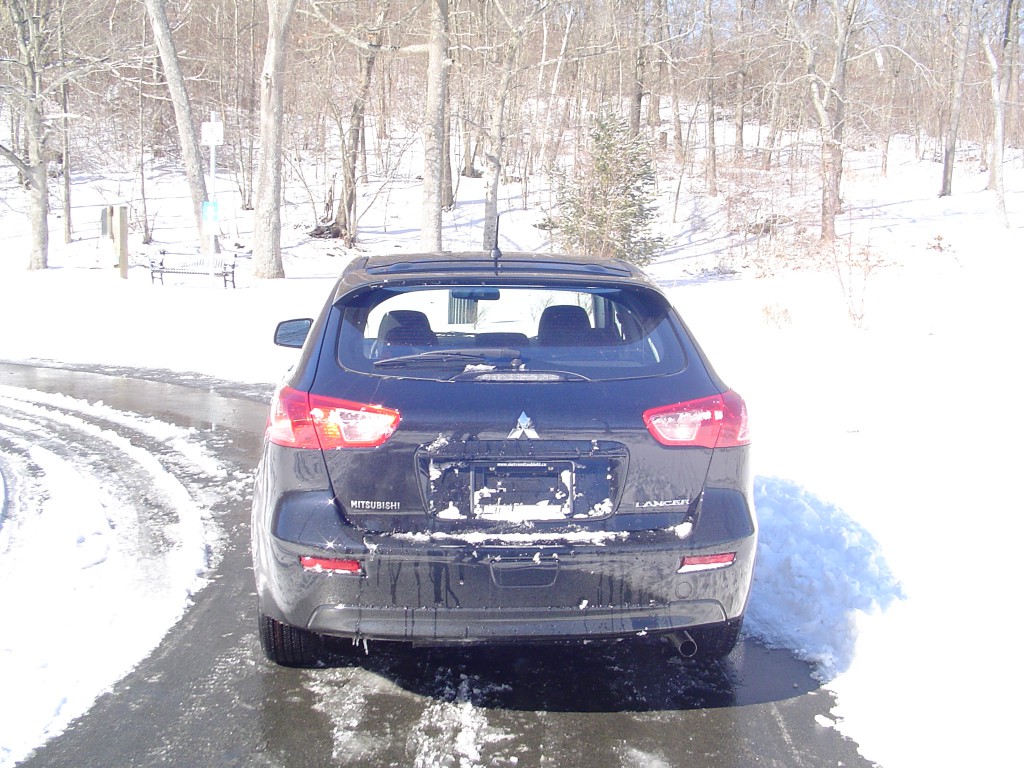 Now, since Mitubishi is capable of making the Lancer EVO handle like it’s on rails, I have to admit, I was expecting a lot in the handling department, even from the SE. I was mighty disappointed. Body roll is abundant and the overall composure felt lazy. It’s almost as if the Lancer Sportback is plain uninterested in being a car, let alone a sporty hacthback like its name insinuates. 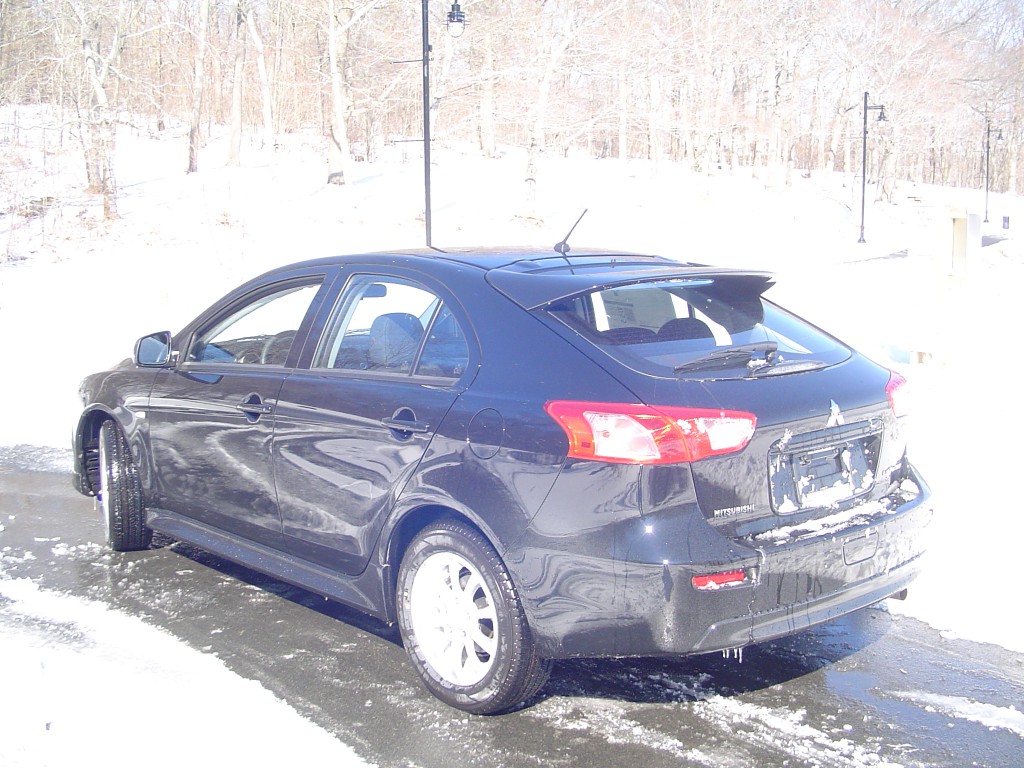 And this goes back to my original point. Without the EVO, what does Mitsubishi have? Sure the Outlander is nice and the RVR seems promising, but the Eclipse is laughable as a performance car, the Galant is decades behind in the mid-size market, the Endeavor is about as old as Betty White and this new Lancer (which really should be the main focus of this car company) is a bit like a gourmet meal at a fancy restaurant. It looks appealing but the small portions that never seem to correspond in quality with the price leaves you unsatisfied. 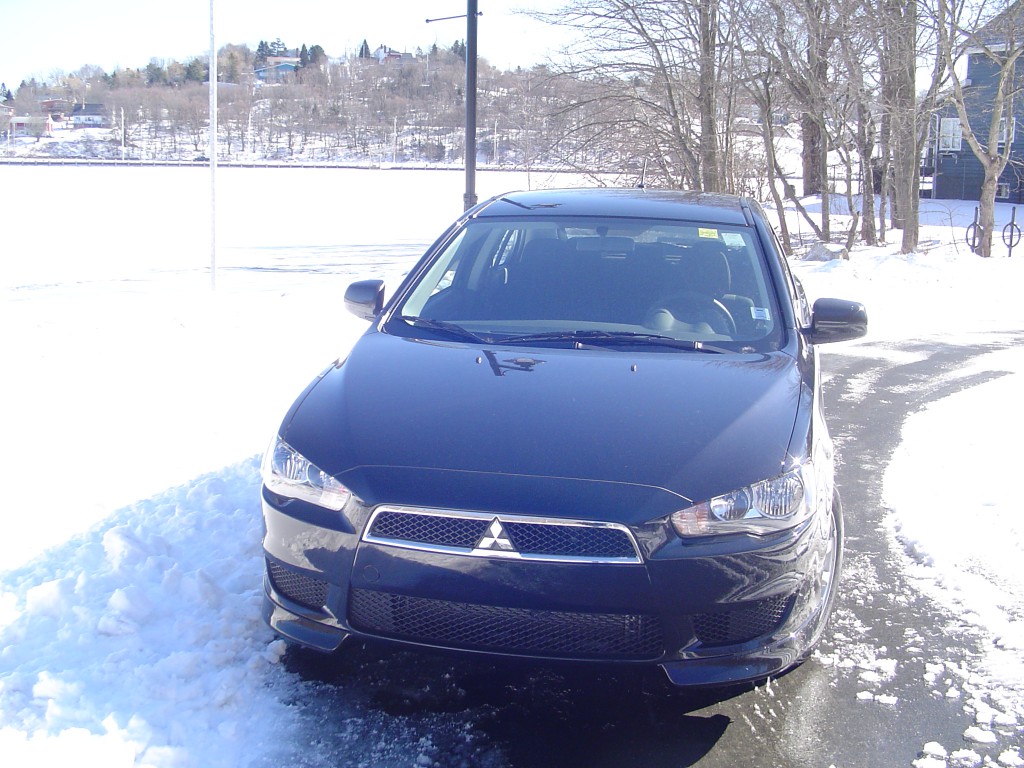 With competition in the form of the Mazda3 hatchback, Kia Forte 5-door, and the Subaru Impreza (hell you could even throw in the Honda Fit) the Lancer Sportback comes up short. Which is a shame because I really wanted to like this car. But I can’t, there’s just much better value out there.

And that’s what I don’t get. If a company has the capability of making an EVO, wouldn’t at least some of that knowledge and technology trickle down the family lines? And we’re not even talking far down the family line, the Lancer Sportback is like a cousin to the EVO. In the end, if this is Mitsubishi’s new direction, then give me that petition that’s going around the internet to save the EVO. Because even though I believe in investing in fuel efficient technologies and fuel sipping vehicles, that doesn’t excuse making sub par product. And to be clear, I’m not comparing the EVO to the Sportback because that would be stupid. I’m just saying that a car company that makes a car like the EVO should also be capable of making an impressive ‘lesser’ version of their halo car.

Now when we all hear the word Mitsubishi, all we’re going to associate it with is the word “meh”.