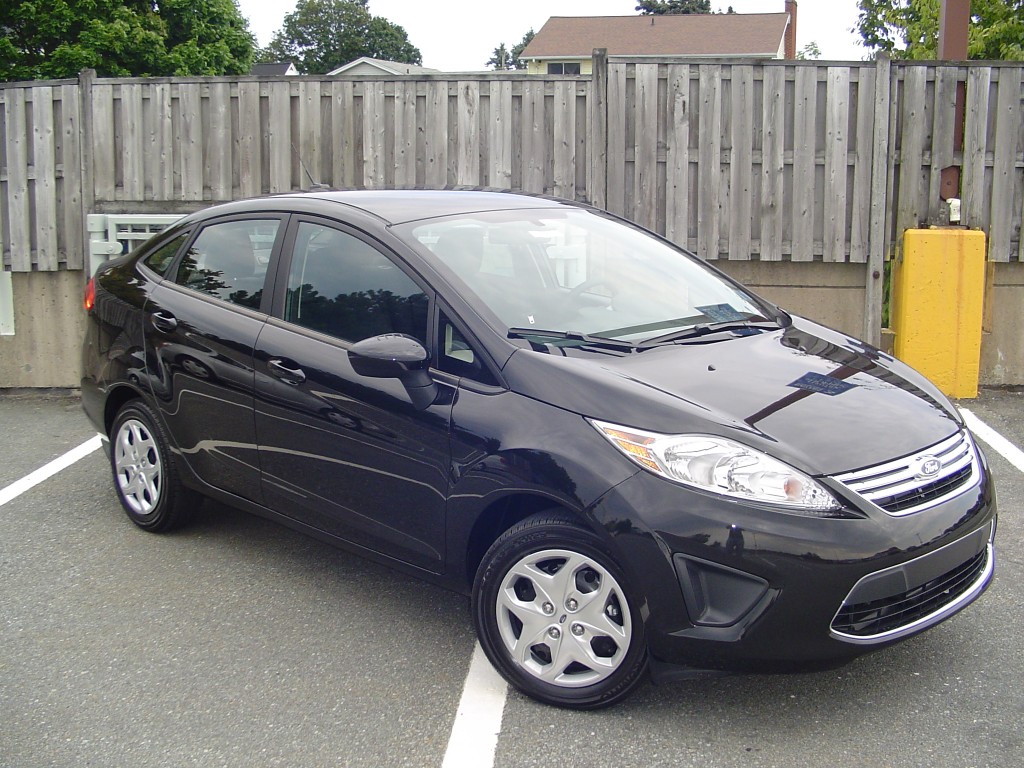 Don’t you hate it when someone else’s tastes have a negative affect on you? For instance, I have an inhuman ability to eat spicy food. And I mean spicy. Think of the spiciest thing you’ve ever had, I guarantee I’ve had spicier. And if I haven’t, I guarantee that I am able to handle it better than you. This may seem like bragging, but it’s really just abnormal. In fact, it’s damned inconvenient. Since my tolerance for spice is so high (thanks to my heritage and just plain growing up with the stuff) it’s hard to find truly spicy food in Halifax that meets my satisfaction. Believe me, I’ve tried. Why? Because North Americans can’t handle spicy food. North Americans apparently prefer blandness. I am seriously addicted to spicy food, so sometimes living here is like an alcoholic living in a prohibition nation.

North American tastes have also been screwing me over in the car world as well. It’s because Americans prefer unnecessarily large vehicles that have a billion horsepower but handle like they are driving on marshmallow roads, and look as though they were designed for Flava Flav. Chrome and shininess everywhere. Basically, tackiness everywhere.

Because of this, we have been deprived of amazing vehicles like the BMW 535d, the Ford Focus RS, and the Audi A1.

Recently there’s been an interesting change, however. It seems the folks at Ford, who make tremendous vehicles for the European market, have finally had a light bulb go on in their heads. Instead of building two versions of the Focus, why not just sell the good one globally? Indeed, why not try selling other product here too?

So here we are, with the Ford Fiesta. The little car is finally available on our shores. Even though we now have Euro Fords, have they still been Americanized for our stupid tastes?

Selling the Fiesta in Canada specifically is one of the smartest things Ford could do. Canadians have more sense than Americans do, and thus, we tend to buy smaller cars. The sub-compact and compact segment are the big sellers here. We also love our hatchbacks.

But Ford has decided to cater to North American tastes still with the Fiesta. As a result, they have made a sedan version. The sedan version looks more awkward than Kate Gosslin on Dancing With The Stars. What the hell were they thinking? Putting a boot on a hatchback rarely works. Then putting tremendously tiny wheels with some of the ugliest hubcaps since the Smart Fortwo on it makes it look downright dumb. The fiesta isn’t a wide car either, so what you’re left with is a car that looks more Americanized than Arnold Schwarzenegger. The Fiesta isn’t a wide car either, so overall the look isn’t that appealing. The good news is, we still get the great looking and practical hatchback as well. But, unfortunately my tester was the ugly sedan. 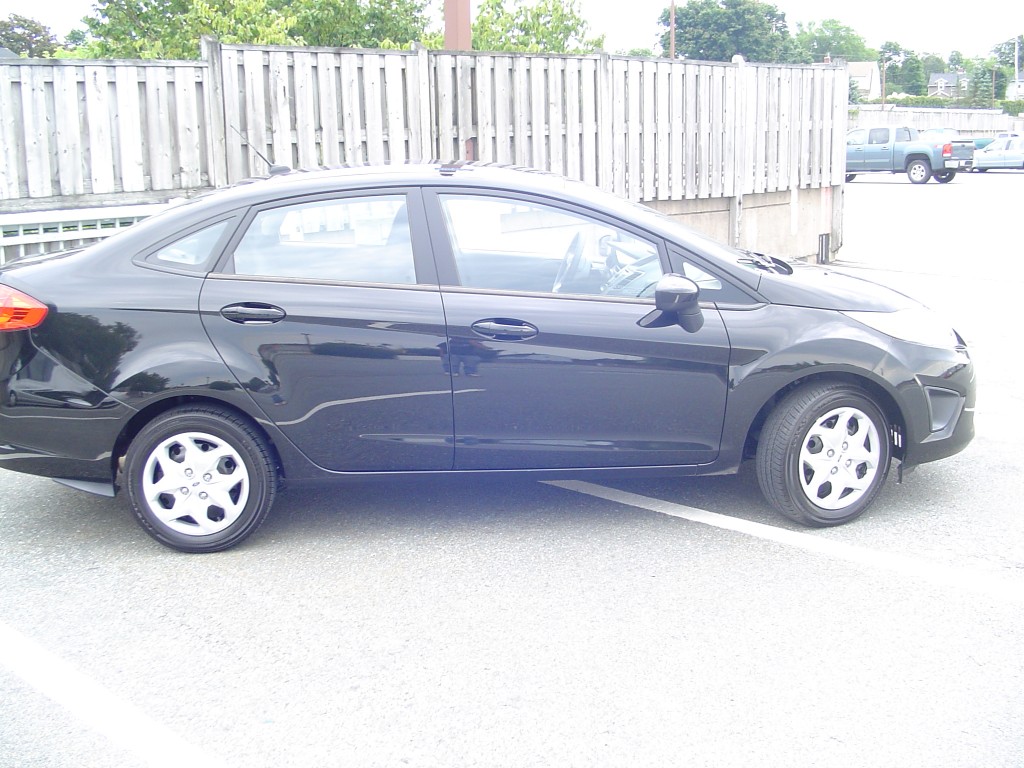 Otherwise, I am happy to report that that’s pretty much where the bad news ends with this car. The interior is quite nice with quality materials. It’s obvious that attention to detail was high on the list when designing the interior. Ford didn’t mess about with the interior like they did the exterior for our tastes – this is exactly the same interior that the Europeans get. Sync is also optional on the Fiesta, and if you’re not familiar with it, it’s basically a more capable blutooth system that can also read your texts back to you, stream audio and even your twitter account. One other thing the Fiesta has is an abundance of ambient lighting. My tester came with soft red ambient lighting, and even though it personally isn’t my thing, I can see how it might be appealing to others. 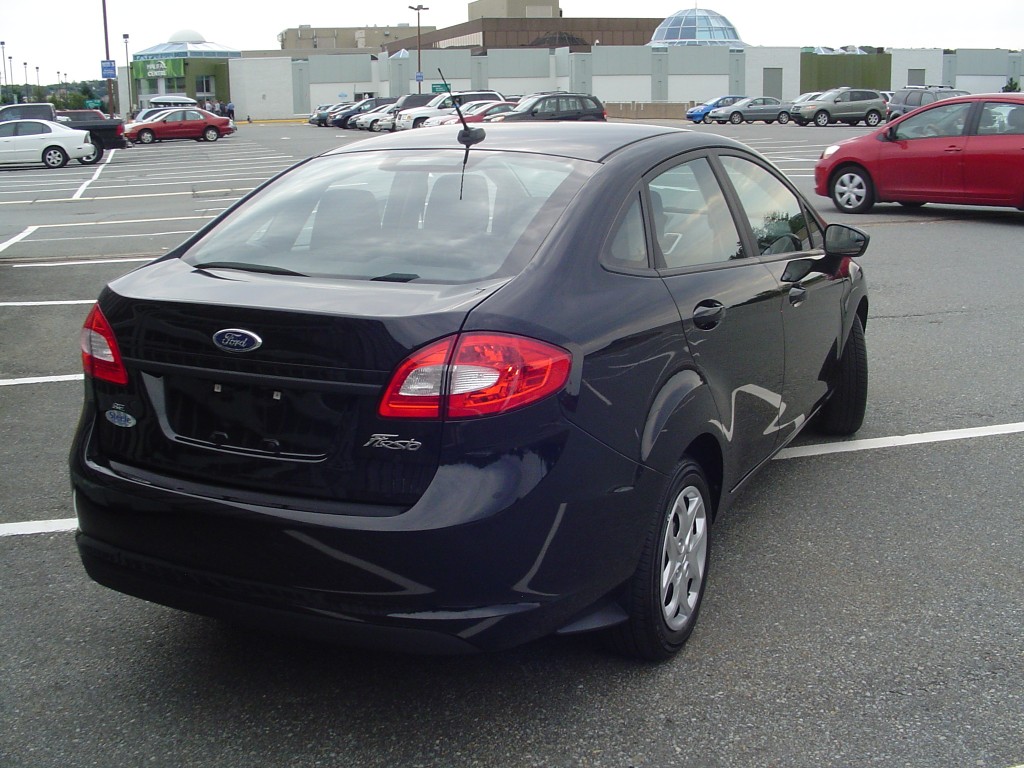 Driving the Fiesta is quite a treat. When driving at normal speeds, road noise is almost non-existent. It’s really quiet inside the cabin. Ford claims the wind noise is 10% quieter than its competition at highway speeds. That’s probably true. Not only will you have a quieter ride, but you’ll also be returning super fuel economy in the process as the Fiesta’s highway rating is 5.1 L/100 kms. In the city the Fiesta gets an equally impressive 6.9 L/100 kms. This is partly due to the Fiesta’s new six speed automatic transmission. It’s a dual-clutch gearbox that is a first for the class. Ford claims 9% better efficiency over a traditional automatic. As a result, the automatic bests the manual transmission’s efficiency scores as the manual is rated at 7.1 city and 5.3 highway.

You’ll still want the manual transmission though. Why? Because the automatic that my tester has really impedes driving fun. And it is possible to have fun driving the Fiesta. The 1.6 litre engine makes 120 horsepower and 112 pound feet of torque which is more than adequate for a vehicle this size, but the automatic robs the engine of its power. Mating this to the five speed manual is sure to take advantage of the otherwise peppy engine. 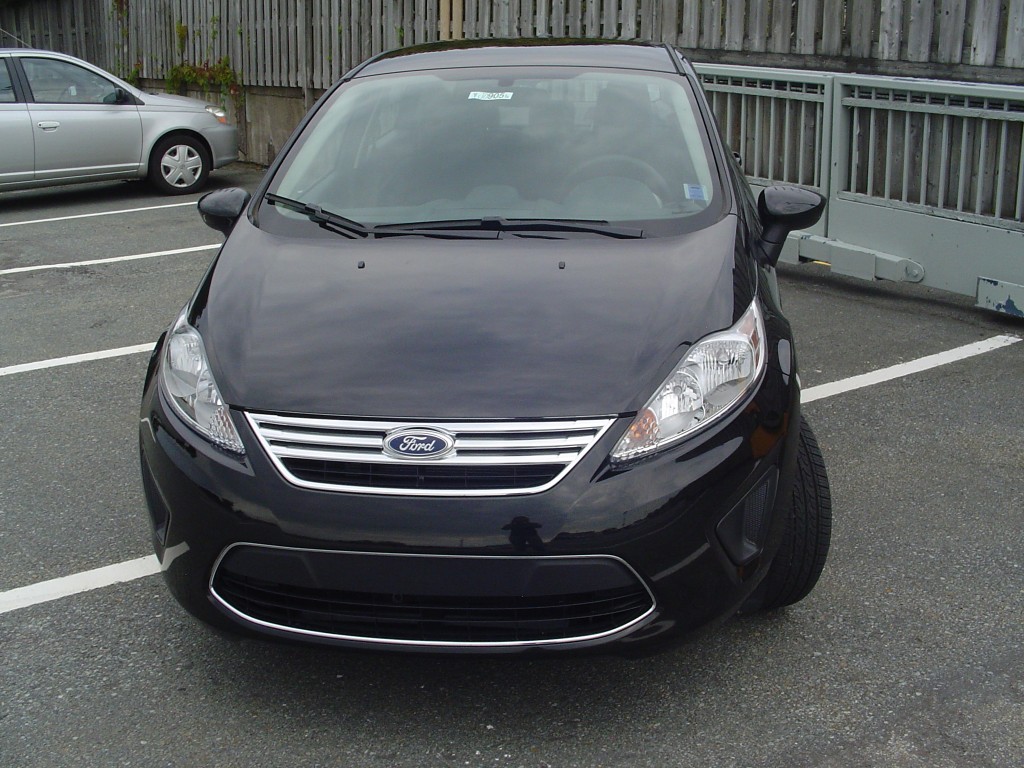 Handling abilities are excellent. But again, get the optional bigger wheels with alloys because it will almost certainly improve the Fiesta’s abilities in the bends, which it does quite well already. Luckily the Fiesta comes with the same stiff suspension and front springs that the European version gets as well as quicker damping in the shocks. This translates into a sub $20K vehicle that feels like it handles on rails.

The thing with the sedan however, is even though it looks ridiculous, that trunk is absolutely massive. It’s astonishingly big. It looks to be just as big as the trunk in the BMW 528i I tested. You won’t loose much practicality by going for the sedan over the hatchback that’s for sure. 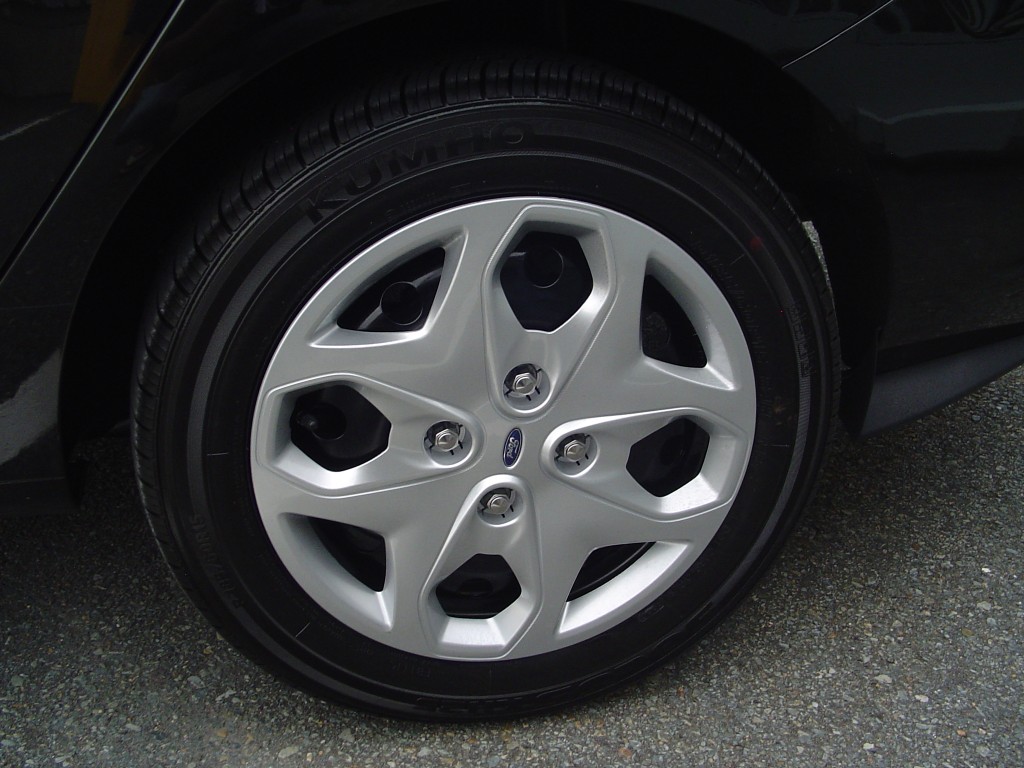 But you really should go for the hatchback. It can do everything the sedan does, and likely does it better if you equip it with a manual and big alloys and tires. You’ll also loose the bulkiness and awkwardness of the sedan. 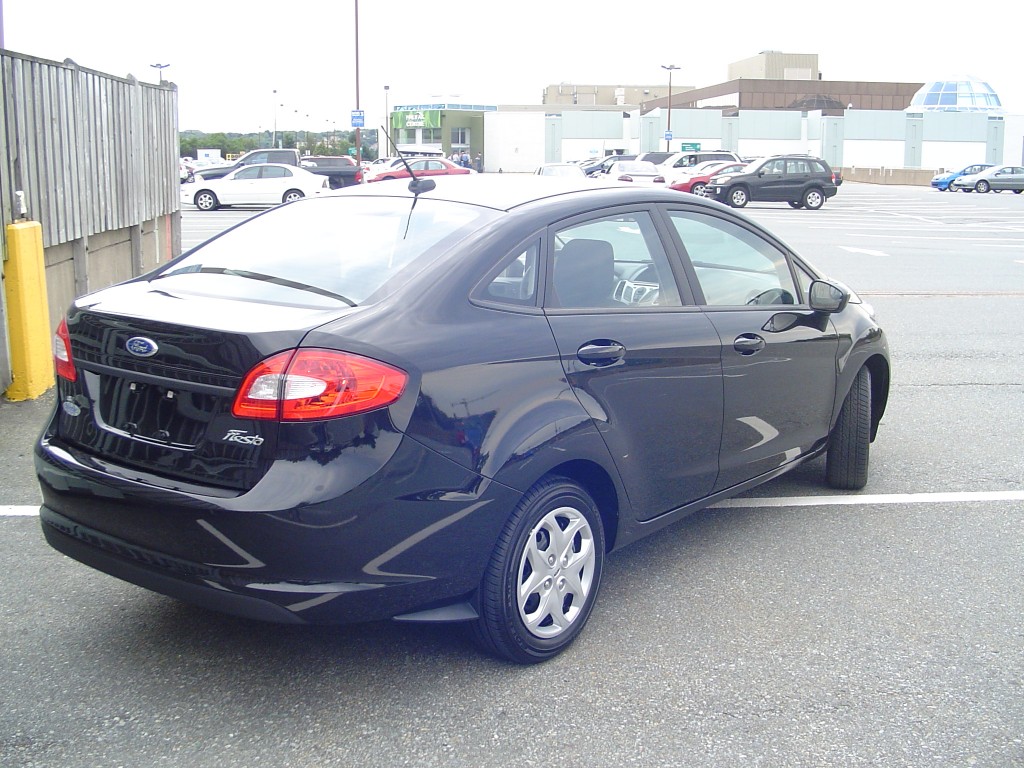 The Honda Fit is generally agreed to be the best in its class, but now I’m not so sure. For the first time in a very long time, I’d have to say that an American brand is actually better than its imported counterparts. Maybe because it’s not actually American, it’s European? No matter. The Fiesta is just one great zippy little car in a tidy package. Just make sure you get the true Fiesta in its SES trim and for the love of God, get the hatchback if for nothing than style alone.

Ford, keep up the good work and bring over more Euro models!