Years ago I had a neighbour who only bought used Ford Crown Victorias in white., usually ex police interceptors. He said he did so not because he genuinely loved older Crown Vics but because he loved how the public’s driving habits and etiquette seemed to change when he was on the roads.

“It’s sort of a legal way of pretending to be a cop,” he once told me.

Of course, he wasn’t interested in pulling anyone over, responding to acts of violence or busting drug king pins. He just wanted people to show him some respect on the road.

While I would never own a vehicle as clumsy as the Crown Victoria for the simple benefits of more behaved drivers while I was on the road, having spent a week with this week’s tester, I sort of understand the appeal.

Today, Ford Tauruses and Explorers now make of the majority of police fleets across North America. However, since Ford has apparently decided that passenger cars are no longer worth their time, I’m noticing more and more Explorers taking part to protect and serve.

And it appears other people are noticing the evolution of the police cruiser as well, because during my time with the 2018 Explorer, I noticed a marked difference in everyone’s driving behaviour on the road.

The Explorer seemed to clear the left hand lane quicker than ABC canceled Roseanne. People tended to be friendlier too with numerous people waiving me through; allowing me to proceed even though they may have had the right of way. I even unintentionally followed a Mazda6 into a grocery store parking lot and parked right behind it in the lot. When we both got out she took one look at me and sighed a breath of relief:

“Oh thank God, I thought you were the police following me in an unmarked cop car!” she admitted.

But while my old neighbour’s Crown Vics accomplished much of the same benefits that I experienced with the Explorer, there was really nothing else about the vehicle that made you want to drive it. Not so with the new Explorer. 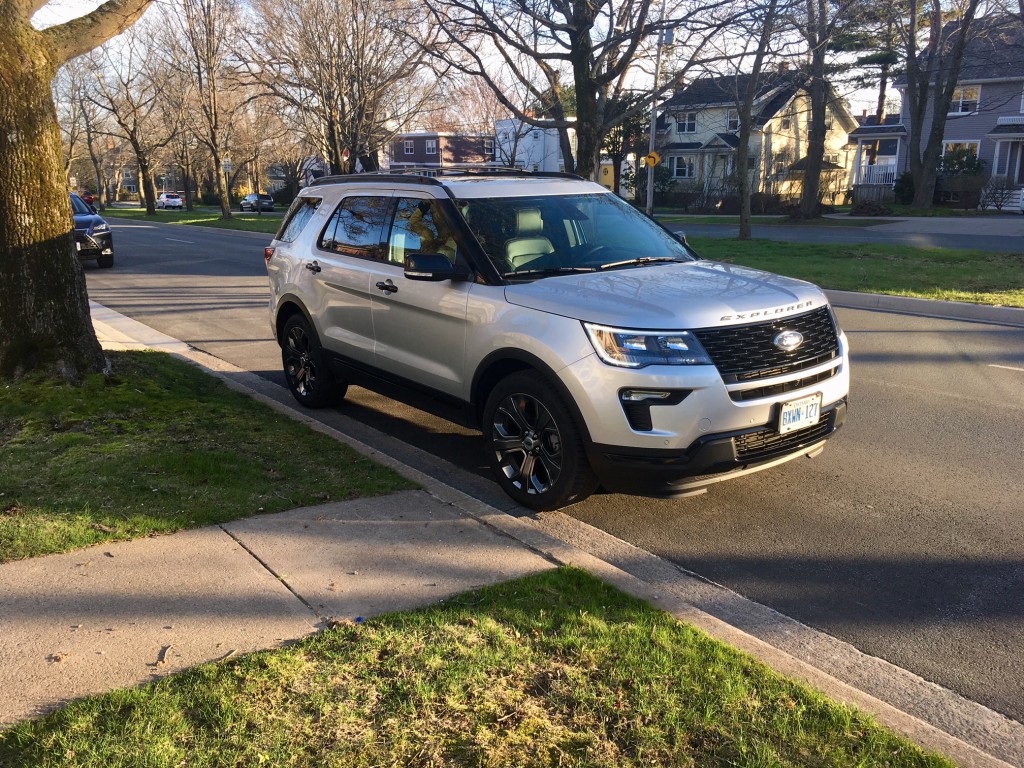 Inside, there’s a lot of great creature comforts for you to use while you inadvertently raise everyone’s anxiety on the roads. Everything from leather, to a heated steering wheel, navigation, satellite radio and more. However, for a vehicle in this price point, I would have expected the Explorer to look the part a bit more. The cabin has a bit of a dreary feel to it, but a large sunroof helps. 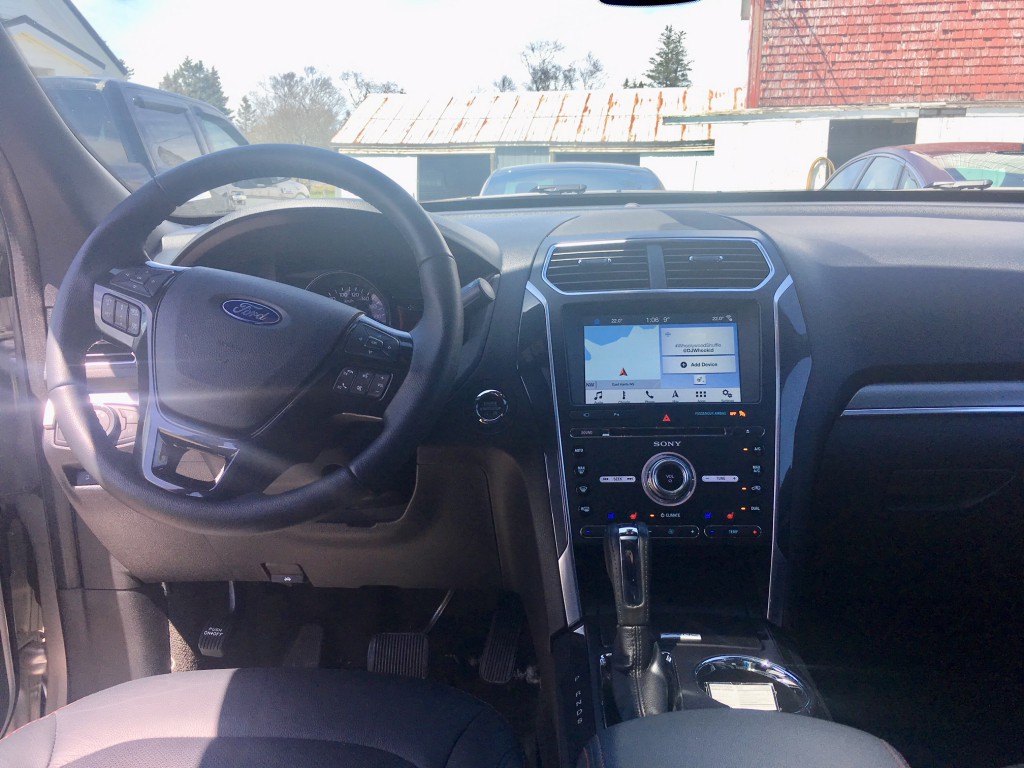 The seats aren’t as comfortable as they could be, there’s a severe lack of side bolstering which makes it feel like you are sitting on the seats, not necessarily in them. Being a large SUV, it’s unlikely that you’ll do much aggressive cornering, but even in normal cornering maneuvers, I found my frame slid about a few times within the seat.

And speaking of the seats, the ones in the third row are best suited to children and possibly young teenagers. Otherwise, it’s best to just keep them folded down for extra cargo room. Folding the seats is an effortless task thanks to the magic of electricity. They are activated at the touch of a button. If you want to impress children and adults alike, be sure to show them this feature as they become memorized by the acrobatics. 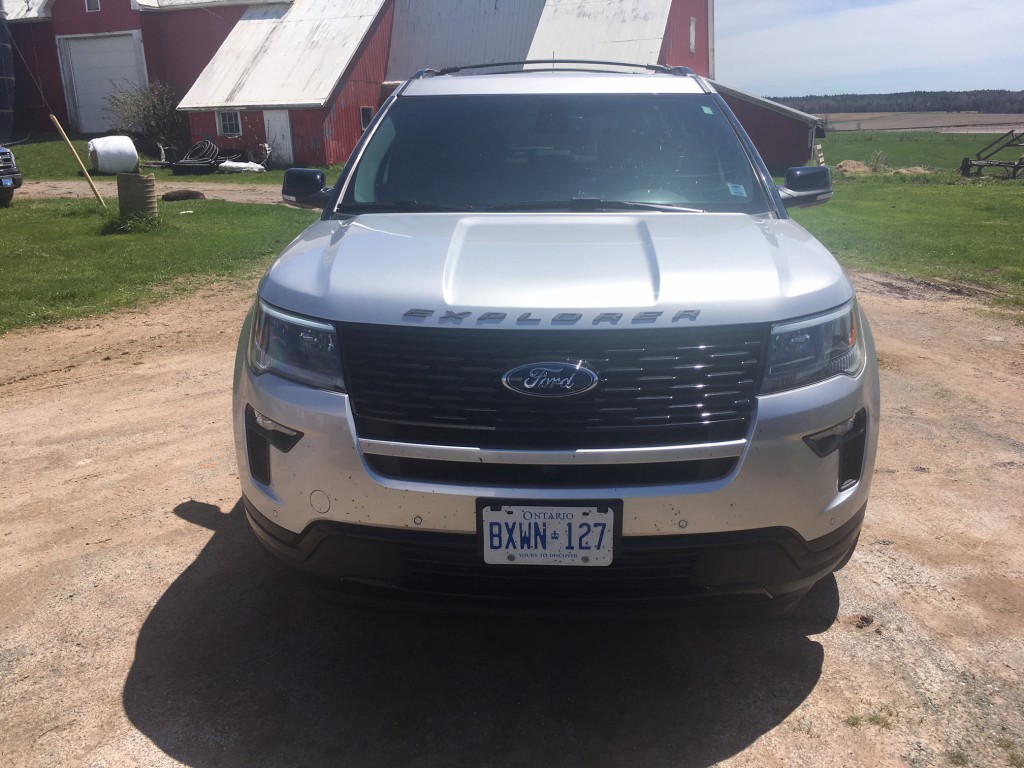 Cargo room is massive in general, but especially so with all the seats down which reveal over 2,300 litres of cargo room and a flat load floor. You could easily throw a sleeping bag back there and spend the night enclosed inside the Explorer rather than fumbling with a tent that lets bugs in throughout the night.

While the Explorer was last redesigned two years ago, it still retains a handsome look that was clearly inspired a bit by Land Rover designs, and that’s not a bad thing. My tester’s silver paint should have been the general public’s first clue that I wasn’t an undercover cop (most unmarked police vehicles tend to be white or black) but with the Explorer’s dark coloured wheels and tinted windows, I supposed at first glance it could be mistaken for a police vehicle. If you’re the type that isn’t interested in pretending to be Johnny Law, then the Explorer has many different colours, configurations, trims levels and accessories to customize to your tastes. 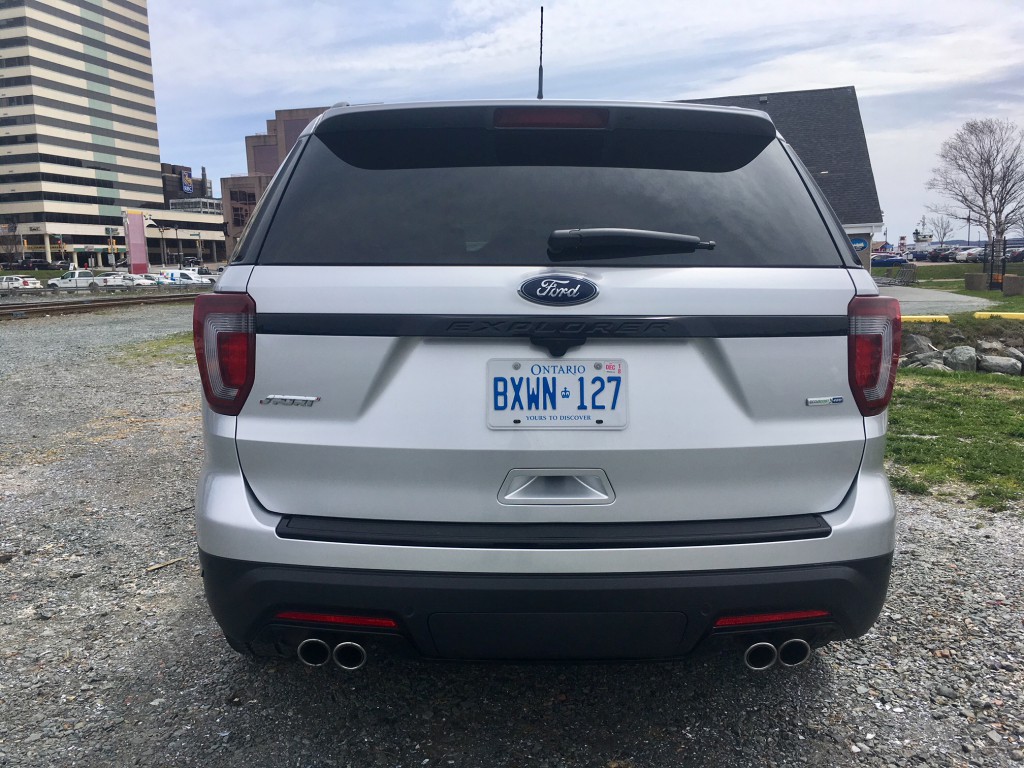 One of those options is what you get under the hood. There’s a turbocharged four cylinder which is good for 280 horses and a naturally aspirated V6 that makes due with 290. The Sport trim gets an ecoboost version of the V6 that makes 365 horsepower and 350 pound feet of torque mated to a six-speed automatic.

The end result is a brute vehicle that can certainly chase down ice cream trucks with ease. 0-100 takes a little under seven seconds which isn’t blisteringly fast, but certainly quick enough for most situations. 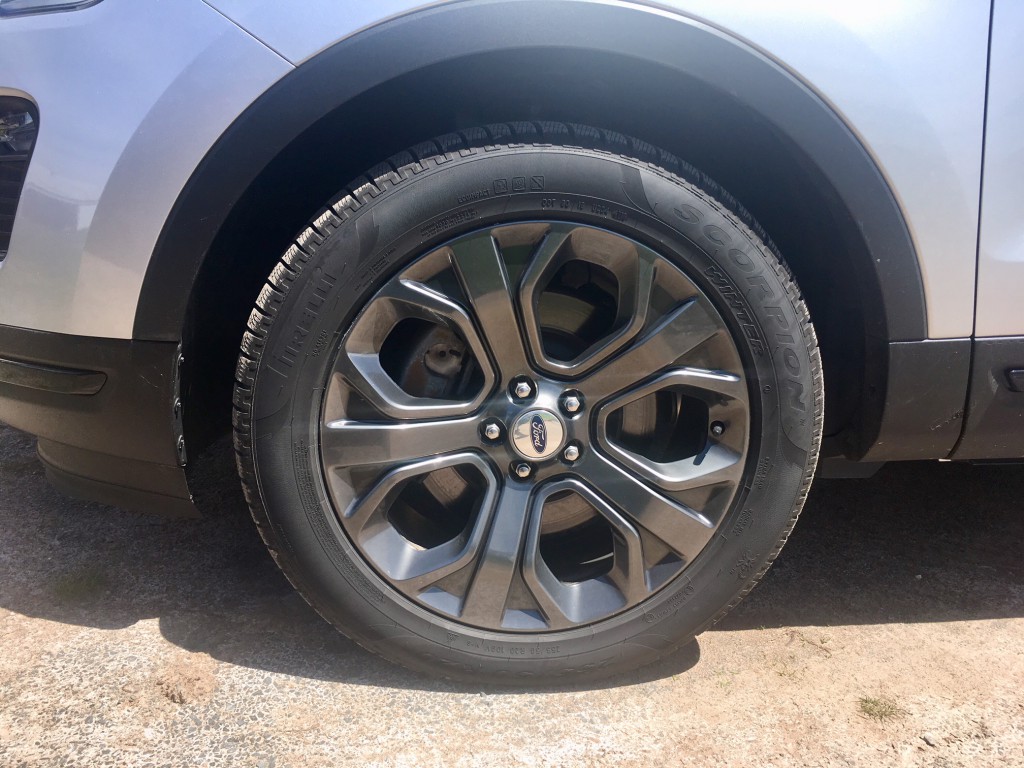 The Explorer seems to feel most at home on the highway where it cruises along seamlessly and comfortably. There’s enough power on tap to pass with ease and road noise is kept to a minimum. Assisted by things such as adaptive cruise control, blind spot monitoring and lane keep assist, the Explorer is a pleasure to drive at 110 km/h.

It is also fairly easy to drive around town despite its size. With that said outward visibility could be improved upon as there are very thick A and B pillars that often force you to duck around them. Rearward visibility isn’t the greatest either, but luckily the back up camera is clear. 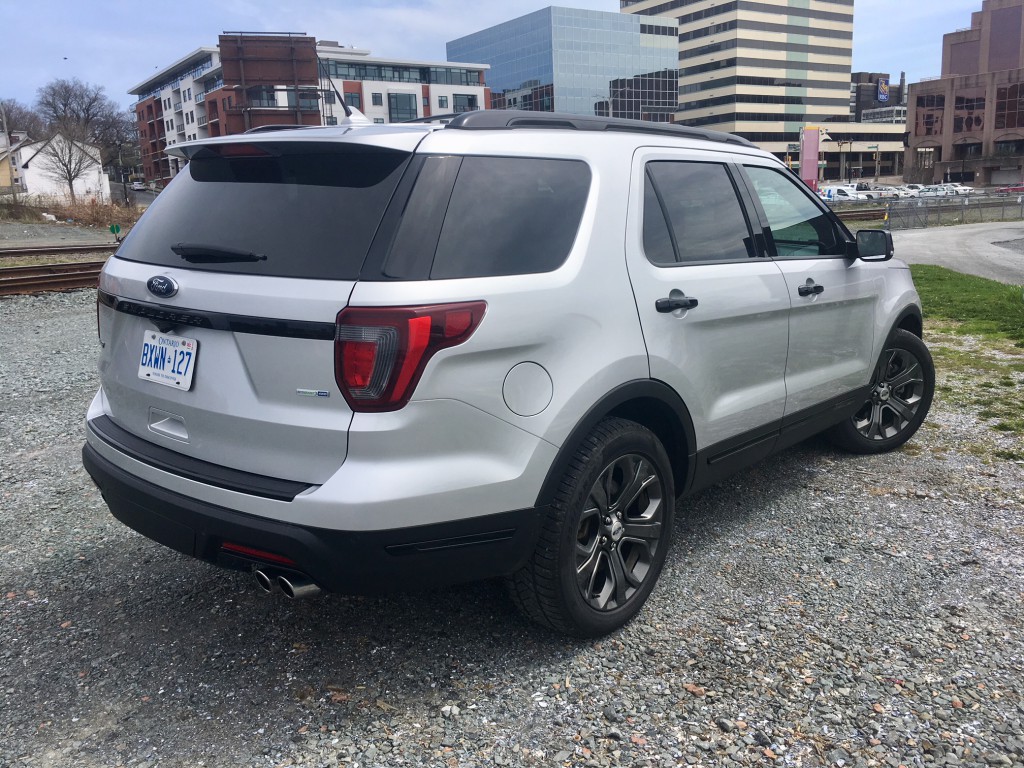 If fuel economy is your main concern than you may want to look elsewhere than the Blue Oval in general. Ford does have some fairly efficient product in the form of the C-Max, Fusion hybrid and the Energi version of both – not to mention the all-electric Focus – but since Ford doesn’t believe in those cars anymore, you better get used to paying a lot more at the pumps if you buy a future Ford product. Officially rated at 14.8 L/100 kms city and 10.7 highway, the Explorer Sport is hardly miserly, though my real world score of 12.3 isn’t too bad for the size of the vehicle, admittedly. 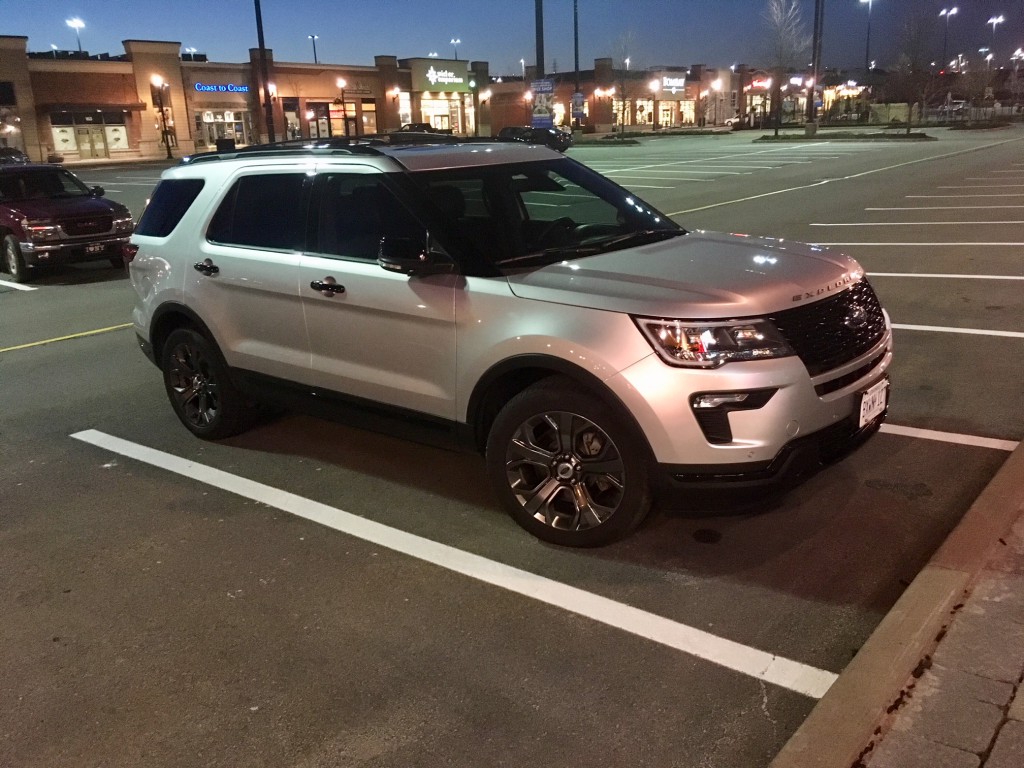 Still, one has to wonder what it is about these SUVs and crossovers that seem have people taken leave of their senses. Yes, the Explorer offers a lot more space and seating than traditional passenger cars, but fuel efficiency, performance, costs to maintain and the environment all take a hit as a result.

Ford is either well ahead of the game by being the trend setter, or they are playing an very risky game. Only time will tell how it works out for them. 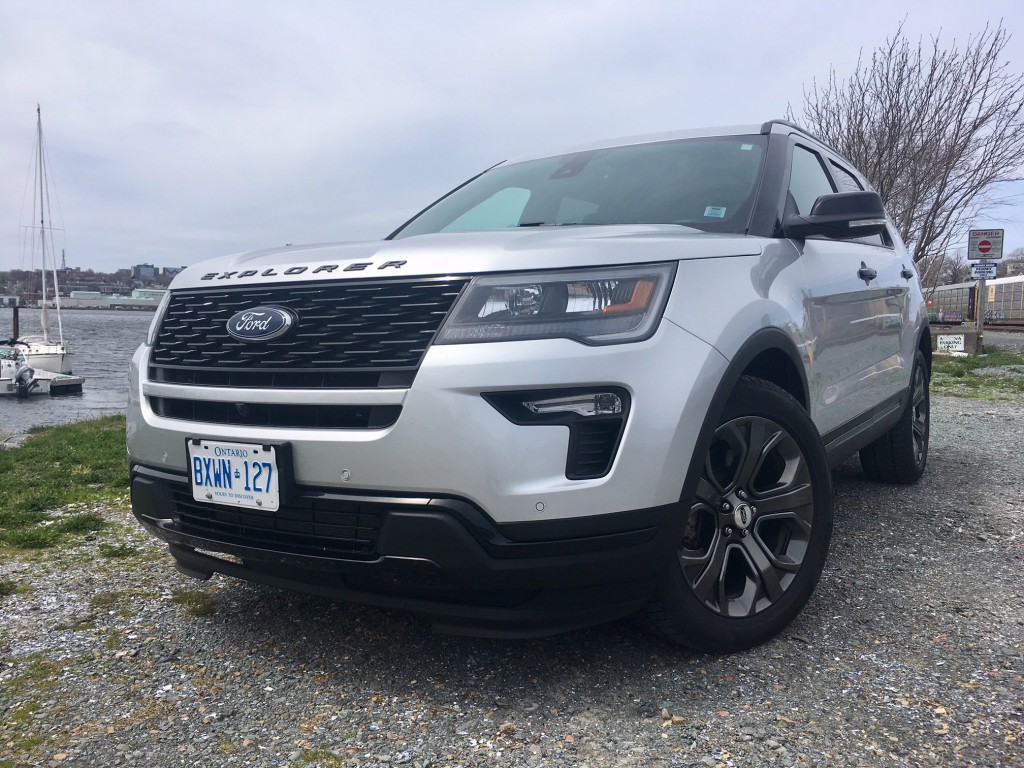 But when evaluating the Explorer on its merits alone, it seems to mostly deliver. It’s comfortable, powerful, spacious and is packed with tech. And you’ll gain unsuspecting drivers’ respect/obedience to boot. Just don’t actually go pulling everyone over.