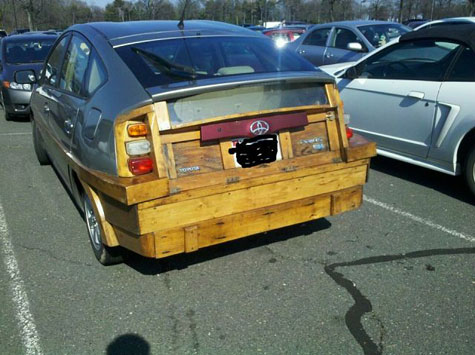 That’s the only explanation for this monstrosity that I can come up with, because it honestly looks like a Prius mated with a deck. Perhaps it’s a Prius that loves nature a little too much?

Originally I thought this was just a budget fix job for some rear end collision until insurance money came through, but seeing as how a part of the wood actually runs down the side of the car, I don’t think that’s the case. This was somehow done on purpose. I can’t believe I’m saying this but the owner might’ve been better off getting a  professionally made wood paneling job, at least it would have been less of an eye sore. And then there’s the custom tail lights which look like they’ve been glued on by a two year old.

And why did they put the Toyota symbol upside down? I guess there’s really no point in trying to find any reasoning in this so I’ll just stop there.