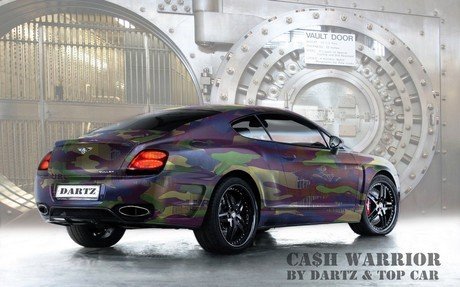 The name alone deserves a fail. Replacing the letter ‘s’ with a dollar sign is so 1997. Specifically it was rapper Ma$e’s signature in 1997. Way to copy a signature that isn’t even relevant anymore. Also, calling it a ‘Warrior’ makes it sound like it belongs on the Klingon Homeworld.

Then you have the car itself. It looks as though it could easily be the pace car at a gay pride parade. Not that there’s anything wrong with that, but I’m positive that was not the intention of the Russian tuner companies when they decided to do this. Why did they choose a rainbow camouflage pattern colour scheme? And the kicker is that it’s coated with a kevlar vinyl. And if you look closely enough, there’s actually a picture of a € 500 bill. In fact, the car’s surface is supposedly made to feel like a banknote to the touch.

To TopCar and Dartz: For unintentionally making this Bentley Continental GT into a gay military baller-mobile, you get an epic FAIL.