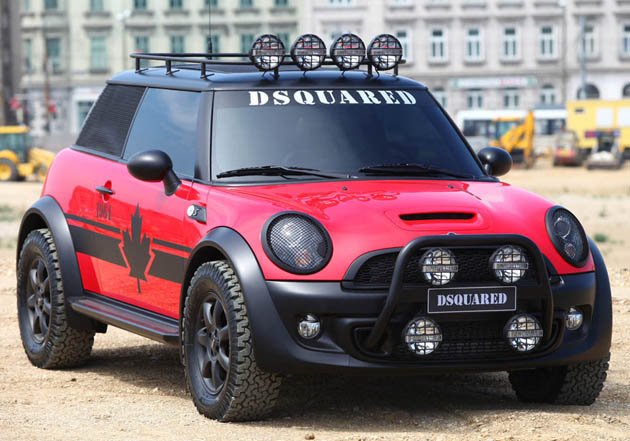 This is apparently what you get when you have two Canadian fashion designers and tell them to make something of a Mini Cooper S. Dan and Dean Caten apparently envisioned an offroading Mini – one obviously more capable than the Countryman. As such this fashionable Mini, dubbed “Red Mudder” is the first Cooper to get Mini’s All4 all-wheel drive system. This may even plant the idea in Mini’s proverbial head to bring the system over to the Cooper family down the road. In addition to All4, the Red Mudder gets a raised suspension, bush guards, rally lights, tinted windows, off-road capable tires (with a hatch mounted spare) and an aluminum plated interior. Since the Catens are apparently quite patriotic, they also put their signature maple leaf on the door and on the headrests of the Red Mudder.

The Catens, who also go by Dsquared, had the opportunity to put their fashion talents to work as a part of Mini’s 11 year sponsorship of the Life Ball initiative which is essentially a European AIDS/HIV fundraiser. Other designers to have the honours over the years include Versace, Kenneth Cole, Diesel and Calven Klein.

The Red Mudder will be auctioned off with proceeds going towards the cause.