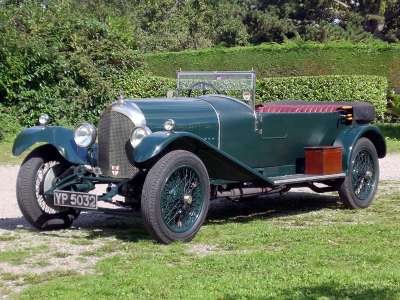 If you could choose any vehicle to drive across the country in, what would it be? For Robin Hine it’s a 1926 Bentley convertible similar to the one pictured above. Seriously.

Hine, originally from England, had his cherished Bentley shipped over and it safely arrived in Halifax today for the cross Canada trek.

Hine is quick to admit that the Bentley has quite the challenging road ahead. In fact, he was quite nervous that the ol’ girl wouldn’t actually start when it was unloaded.

“Let’s turn it on and see if she runs … vroom vroom … look at that, first time. Excellent, well done,” said Hine like a proud father. Hine was quick to cool down the radiator with water and add some much needed gas to the carburetors.

This is the Bentley’s second trip to Canada. It came back in 1964 and drove from Vancouver to Winnipeg for a wedding.

Hine isn’t concerned with the Bentley’s ability to keep up with the more modern cars on the trans Canada highway since he’s actually raced it before on a track.

Hine will catch the ferry to Newfoundland on Wednesday to start the trek.

3 Responses to "85 Year Old Bentley to Trek Across Canada"