It seems like every manufacturer wants us to believe that their CUV’s are go anywhere all terrain machines. The truth is most of the CUV’s we see on the road, although 4WD, would be only slightly more capable off road than a sedan. To every rule there are exceptions of course, Jeeps for example live up to the hype placed upon them as does the rather pricey Range Rover line. But what if you want the freedom to travel anywhere but do neither want a Jeep nor want to spend Range Rover money? Well near far as I can tell you have but one choice: A Land Rover Discovery.

I had the chance to pilot a 2017 Discovery Sport HSE LUX during a week of colder temperatures and actual snow, a rarity in Ontario this year. I am glad that JLR has resurrected the Discovery nameplate and done away with the dreary LR4 moniker which did little to attract potential owners or inspire any thought of the endless opportunities for adventure these SUV’s are capable of providing. 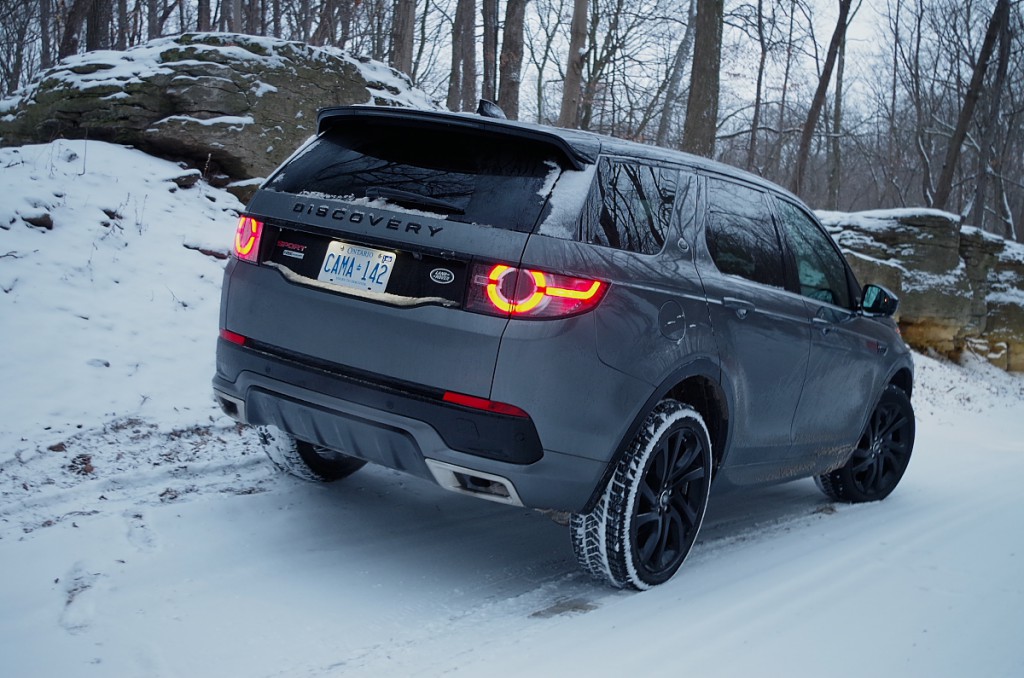 The Disco looks a lot like the RR Evoque; this is because they share the same platform, engine etc. There are obviously stylistic differences which would take hours of boredom to properly examine; so to put it succinctly the Disco is the more rugged of the two and will appeal to a more adventurous and outdoorsy group of people.

The new styling has in some circles been compared to the Ford Explorer. This is more a complement to the Ford than a shot at the handsome and distinctive Disco. Whatever side you fall on we can all agree that the new look has been softened, perhaps too much for some tastes.

The test unit was fitted with the optional Black contrast roof and the Dynamic HSE pack which adds unique front and rear bumpers, integrated tailpipes and eye-catching 20” gloss black rims that really adds to the “Sport” look. The more modern and upscale design will no doubt draw in more perspective buyers. 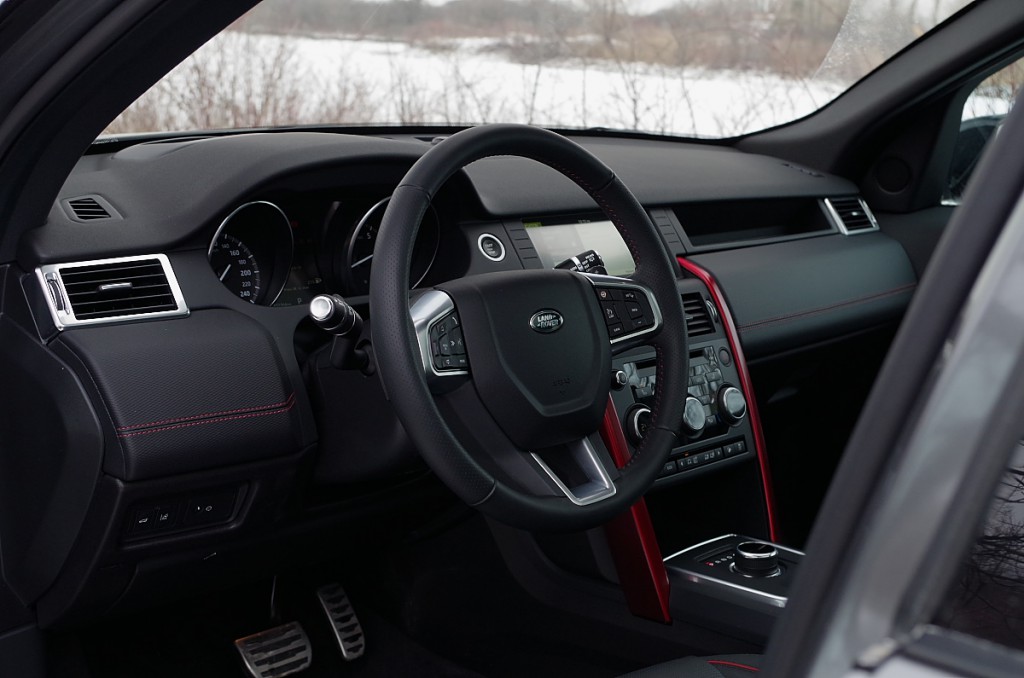 The inside is minimalist, not quite a Volvo but designed in a similar vein with clean lines and simple elegance. Much is shared with other JLR vehicles, for instance the rotary gear selector, the steering wheel and various switch-gear. What is new is a 10.2 inch infotainment touchscreen that displays a wide navigation map with an unexpected amount of detail. The InControl touch screen system allows user to interact with it as they would with a smart phone with the ability to pinch and swipe. It must be reported that the system was a bit dim-witted at times and would require multiple tries before responding to your touch, thankfully there are some knobs and buttons to revert to once the frustration becomes too much.

A heads up display, vision assist pack, driver tech pack and heated front windshield round out the options I was able to enjoy. The vision assist package will impress with its numerous camera views aiding you in tight rock strewn trails or congested urban parking lots. Those planning on going into the wild the will find the inclinometer and 4X4 wheel information screens very useful. 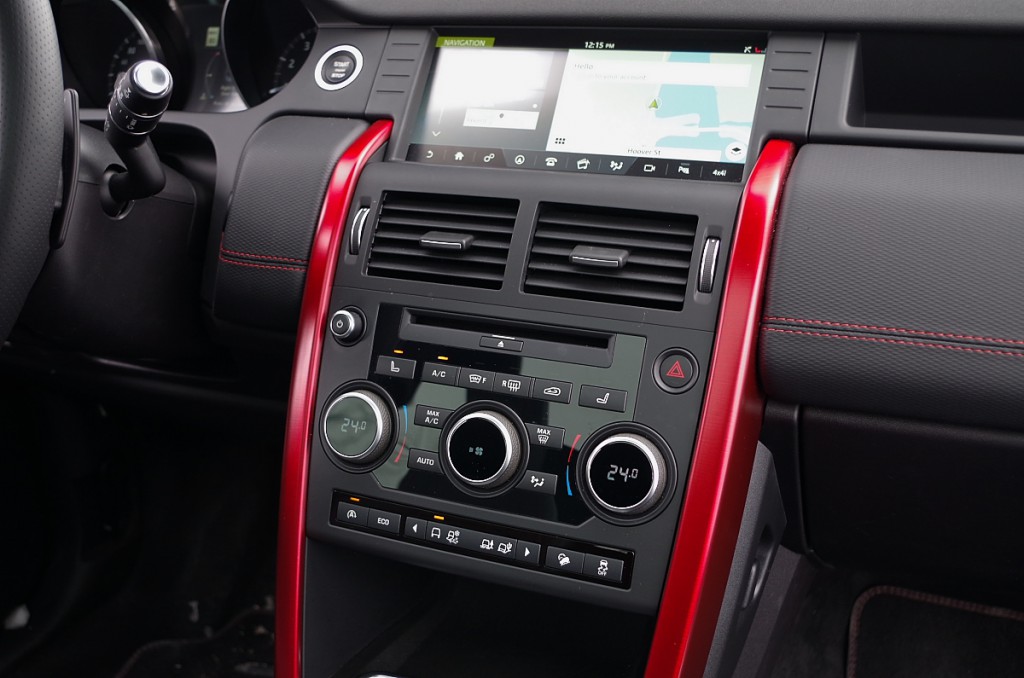 There is the option of fitting a third row of seats bringing the potential to transport 7 passengers, a word of caution though as the vehicle is not exactly large and the rear most seats will be best suited for the smallest of children or the in-laws.

The rest of the passengers will be quite comfortable in the supportive leather clad seating. In the 5 passenger layout tested here the cargo area is large and level with a modest lift height. The full glass roof adds to a spacious feel and is a crowd pleaser; not one person failed to comment on it upon entry.

There is on piece of technology that I could do without; Intelligent Speed Limiter. The way it works is simple, it is tied into the software that recognizes and displays speed limit signs, which in and of itself eliminates a plausible excuse for a velocity related infraction, now the vehicle can actually impose the limit on you electronically making speeding impossible. How do you safely pass a motorist of advancing years who is dawdling along just below the posted limit on a short stretch of open road? This is not for me! 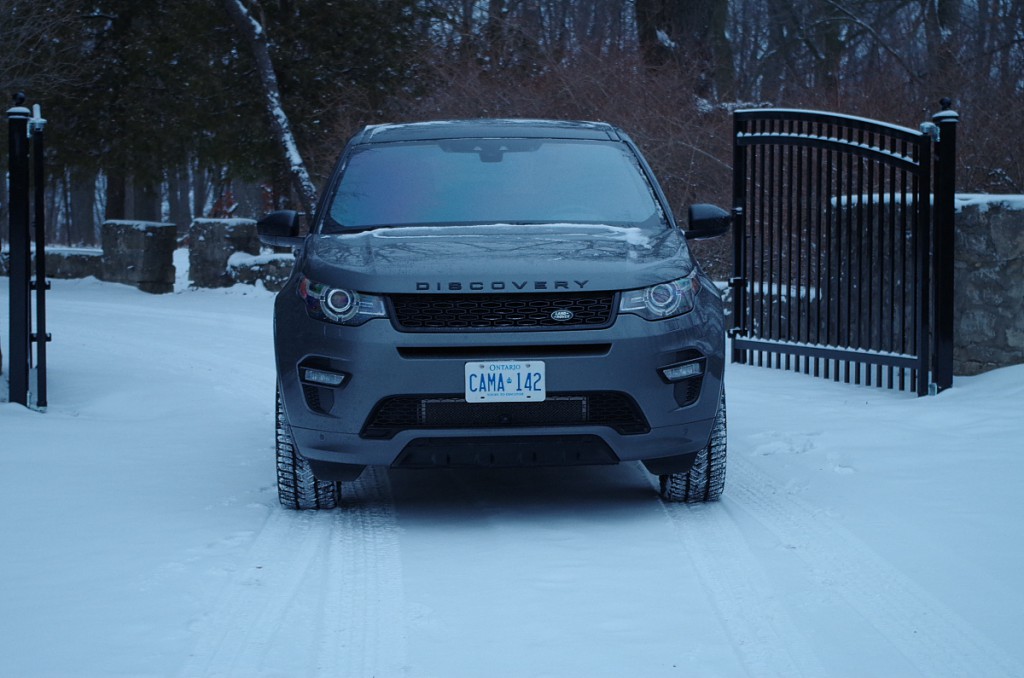 Fitted with a turbo-charged 2.0L 4 cylinder the Disco is more than adequately capable. While not a rocket by any means, you will scoot about town with ease, and highway passing feels equally effortless. By the numbers the Igenium power plant develops 240 horses and 250 lb-ft of torque; enough to do a 1 – 100km/h run in 8.2 seconds, hardly sporty but it does feel quicker from the driver’s seat. The 9-speed transmission works well with the Haldex 4WD system. Offering the terrain response system (with grass/gravel/snow, mud/ruts, sand modes) of its more expensive siblings which alters throttle response, transmission function, stability controls, centre differential behaviour and torque distribution the Sport is a surprisingly smooth and comfortable daily driver. Of course when the pavement ends the Sport has the chops to get muddy with the best of them. 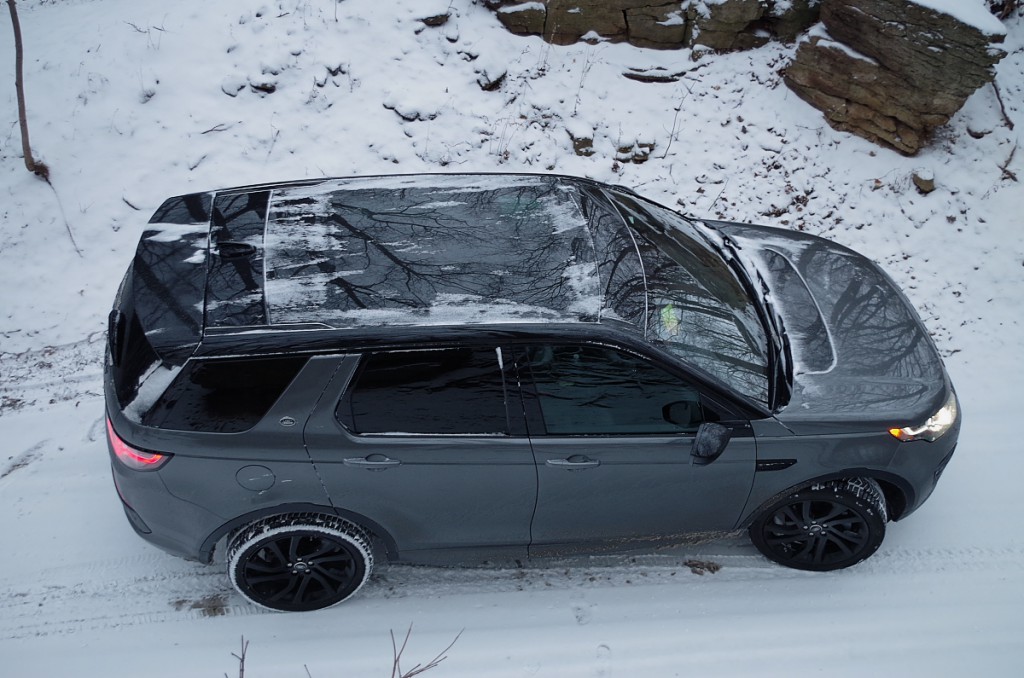 The Discovery Sport is the company’s entry level model. This fact alone left me expecting some cut corners and a bit of questionable driving behaviour. The truth is the cheapest model offers the same sort of confidence and true multipurpose capability as you get in a much more expensive Range Rover. The throttle is responsive and thanks to the low end grunt and broad torque curve passing is brisk. Body roll is kept in check and harsh rutted roads do not upset things as much as you might expect.

The 9 Speed transmission moves through the gears quickly even skipping gears under heavy acceleration. Around town the transmission will set off in second in order to pull away smoothly in stop and go traffic. The brake pedal allows for delicate applications and at speed provides a welcome confidence under foot. The electrically assisted steering is a tad numb but still responsive. It is also feels nicely weighted and is predictable enough to enjoy some spirited backroad blasts. 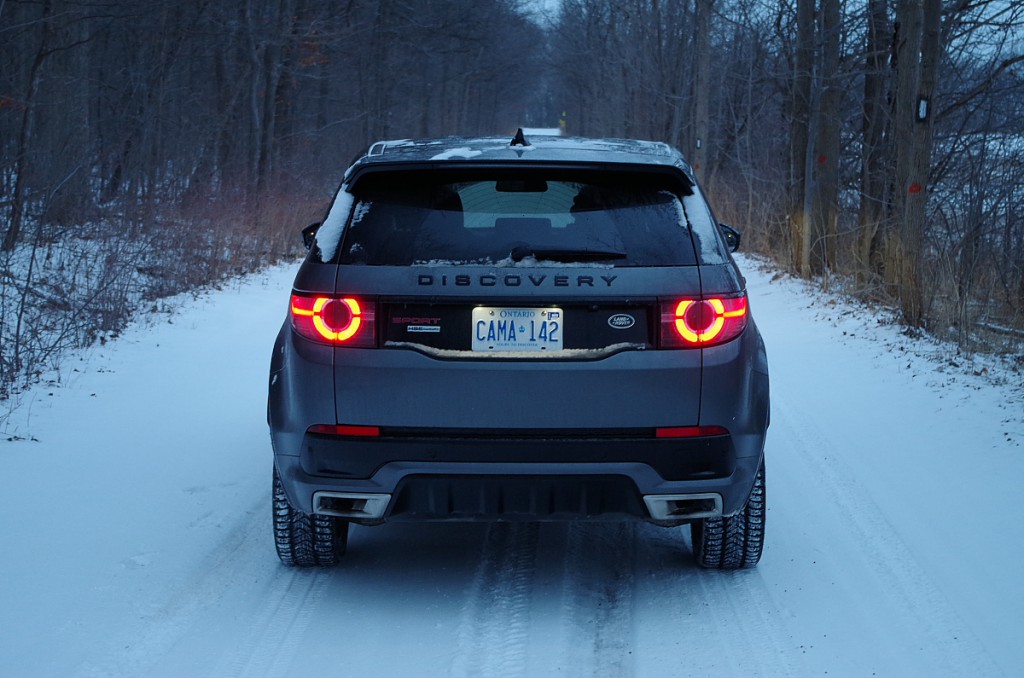 During my week I averaged 11.2 l/100km of Premium fuel consumption. The official government testing results are 12.0/9.2/10.7 city/highway/combined. My time was primarily urban with a few longer highway trips. These figures are an improvement over the previous model and relatively good among the competition. Lightweight aluminum was used in the doors, tailgate, hood and roof result in a 20% lower weight for 2017. Start/Stop technology also aid in frugal sipping and functions in all modes not just ECO. The system is a vast improvement over other JLR products when it comes to smooth restarts. 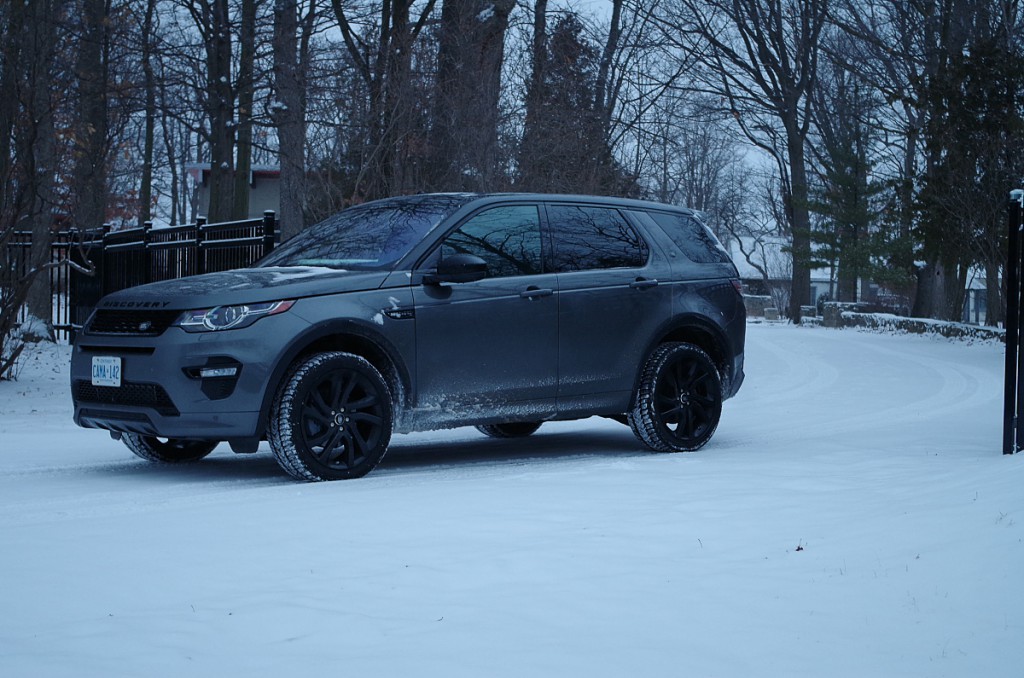 Despite being the “budget” model that was somewhat softened to appeal to a broader range of buyers, the 2017 Discovery Sport offers a lot of ability for not a lot of money. It stands alone in the luxury entry level CUV/SUV market as the only one with actual off-road ability. All of these 4WD systems are costly and should have had the accountants demanding that corners be cut in the interior. While some plastics are present, the space is very comfortable with a definite upscale feel. On the road is pleasant to drive and inspires confidence despite what the elements or lack of pavement throw at it. It really is the only choice for the person who wants to explore nature on the weekend and attend business meetings during the week.