If you did a double take on the headline of this week’s review, you could be forgiven. That’s not a typo, you can indeed get a 2017 model vehicle this early into 2016.

But the real question is, why bother doing so? Well, it may or may not surprise you to know that the Hyundai Elantra consistently lands itself in the top three for most sales in the compact sedan segment. It may even surprise you to know that the Elantra has found itself in spot number two quite a few times, beating out the go-to-for-most-people Toyota Corolla. But it has never been able to consistently dethrone the sales king: the Honda Civic.

Like any competitive industry, most companies invest heavily to get that number one spot for obvious reasons. When Hyundai introduced the previous generation Elantra, they wanted the ‘ooh ahh’ reaction to its styling so they made it as swoopy and as sleek as possible. They may have even trained their dealers to up sell based on the looks alone. I remember tagging along when one of my friends who was pretty much sold on the Corolla, but wanted to make sure she wasn’t missing out on anything else by trying the Elantra. She ended up mentioning this to the salesman at the time and I can remember his response:

“The Corolla is a great car, but ours is better looking.”

That was it. That was his only response. While I respected the fact that he didn’t take the opportunity to bash the competition, it’s a bit like saying “Canada is a great country, but the Antarctic has more penguins”. It’s a non-argument.

That missed opportunity was a shame because the previous generation Elantra was a decent car with oodles of value to go along with its ‘better looking’ exterior.

The thing is, the recently introduced 2016 Civic, now has eye-catching styling as well, which takes the “at least ours is better looking” argument out of the equation.

So in order to get that number one spot, Hyundai seems to be pulling all the stops, including introducing the redesigned Elantra as a 2017 model. Because telling your friends you own a car 2017 model year car just seems way more impressive then telling them you own a 2016 in the year 2016.

Luckily, Hyundai has more aces up its sleeve than just an impressive model year and good looks. 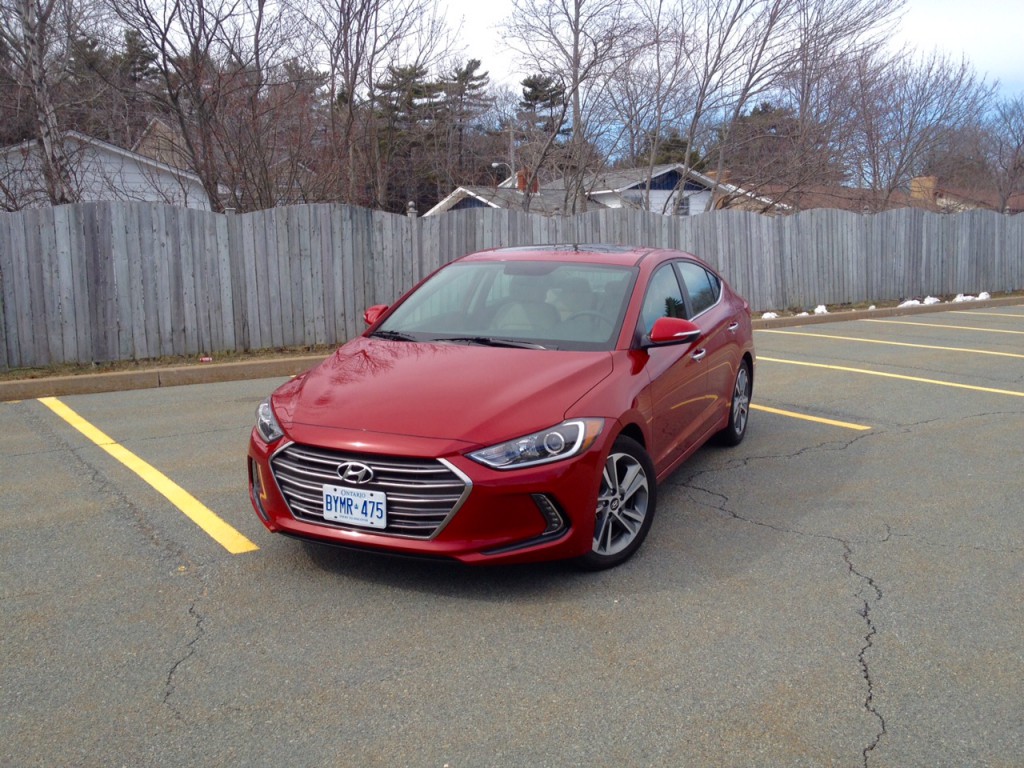 But since we’re on the topic of looks, I gotta say, I was right. When the previous generation Elantra came to the scene there was no doubting its styling was eye-catching but I remember thinking, “how are they going to improve upon it when it comes time to redesign?”. And here we are with the new redesign. The result? Well, the Elantra actually seems to have more toned down styling; exactly what’s happened with the new Sonata. They went so big before that the only way to go was to tone it back. That’s a good thing if you prefer less flash to go with your car, but it’s a bit like gloating that you can eat an extra large pizza to yourself and then admitting that you can’t half way through. In other words, it’s a bit of a let down. 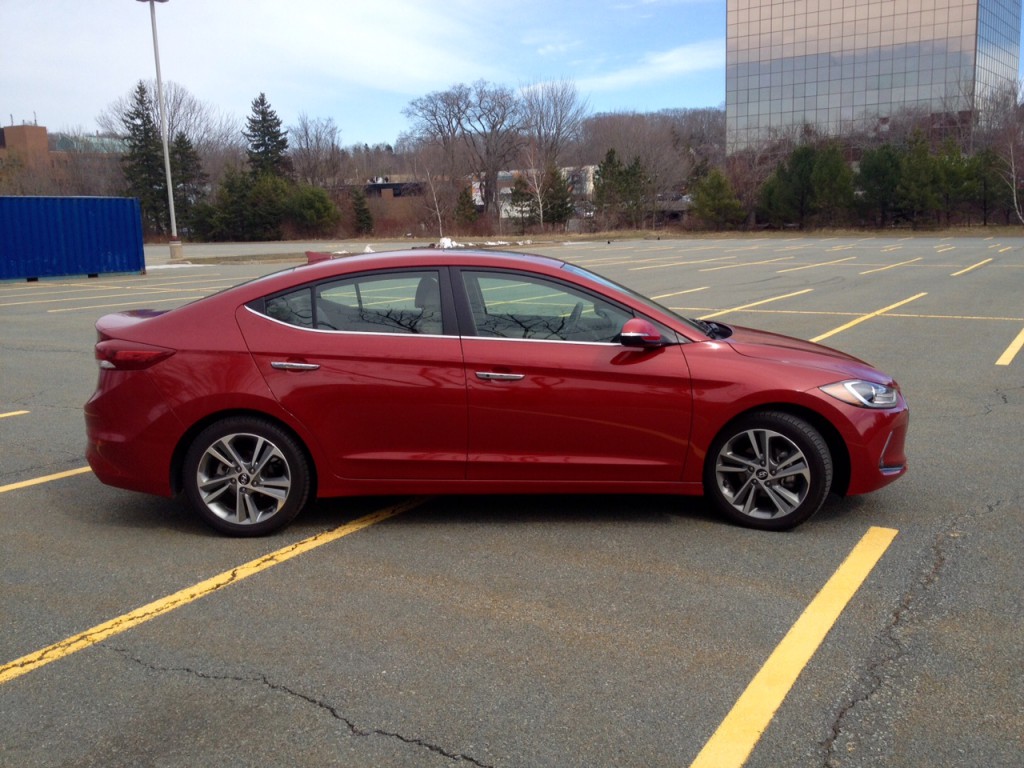 Still, changes include a resigned and larger grille, reworked headlights with LED daytime running lights, new wheel designs and redesigned tail lights, though you would be forgiven if you couldn’t tell the difference between the current and previous generation’s rear end. There’s no denying that the Elantra is still a good looking car, but I’m not entirely sure our salesman friend can still use the “ours is better looking” argument anymore, at least when it comes to the Civic. 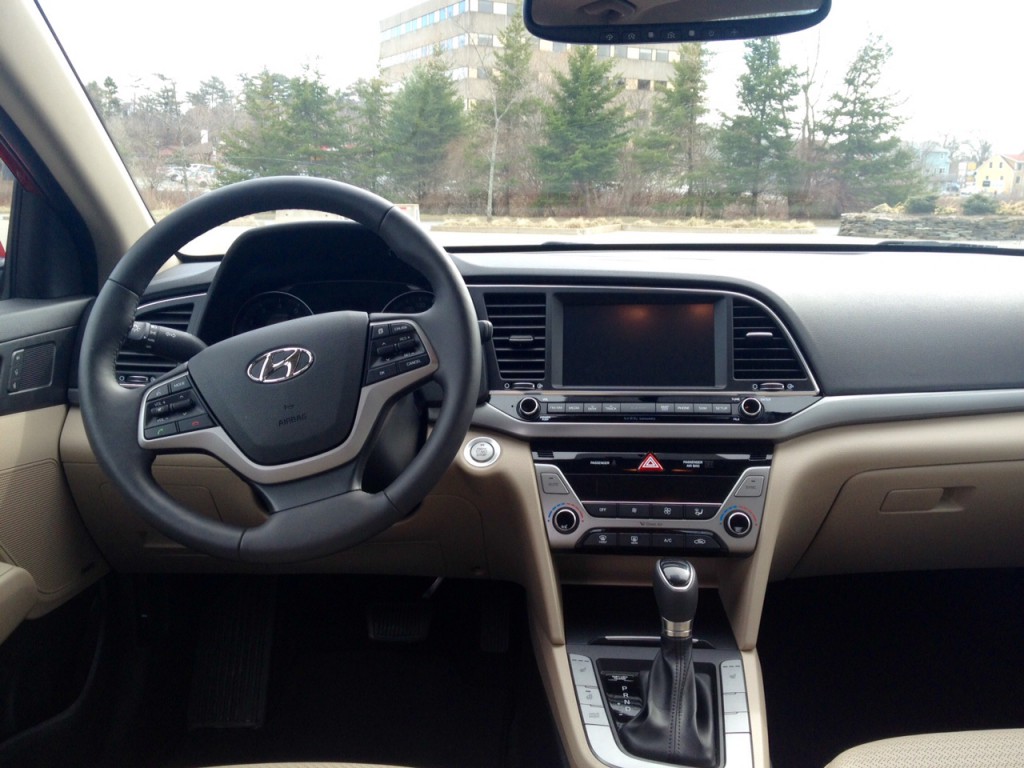 The bigger news is inside where you’ll find a significant redesign, where you’ll also notice a lot more conservatism in the design. The upside of that is a still rather handsome looking interior but with controls exactly where you’d expect them to be in a logically laid out order, though for some reason the new steering wheel design does nothing for me. Luckily, the infotainment unit does as it’s very good. It’s intuitive and actually responds to commands. On top of that the navigation is spot on; anyone could get in and figure out how to use it. The graphics are decent and the responsiveness to zooming in and out of the map is about the quickest I’ve experienced. Good work on that one, Hyundai. 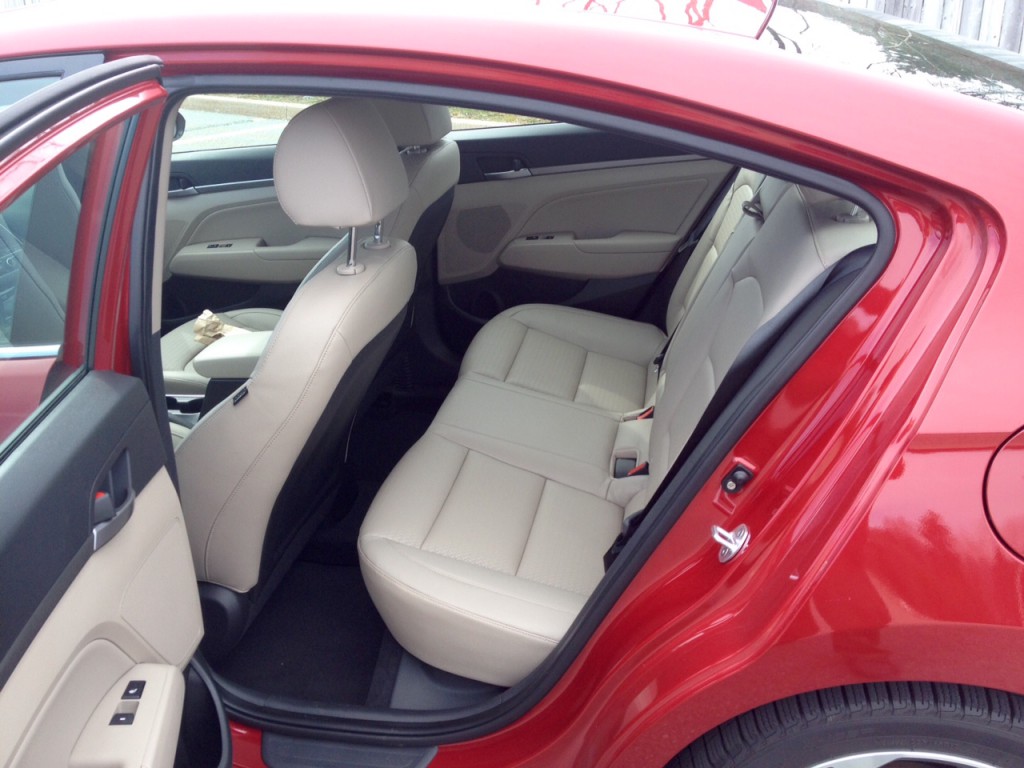 And good work also on maintaining interior room to go along with the toned down swoopy styling. The back seats have plenty of room; so much so that you may want to consider saving yourself a few thousand dollars by taking a look at an Elantra over a Sonata. While you do need to duck a bit to get in thanks to the sloping roofline, once you’re in, there’s plenty of head and leg room. Shoulder room seems improved as well, which may be due to the fact that the new Elantra is one inch wider than the outgoing model.

As mentioned, Hyundai’s strategy in moving units off the lot is value and the Elantra does not deviate from this mantra. While our tester in Limited form is close to being fully loaded and thus, a bit pricy, the Elantra still has features you can’t get in the competition such as rear heated seats, a heated steering wheel, selectable drive modes and blind spot monitoring. 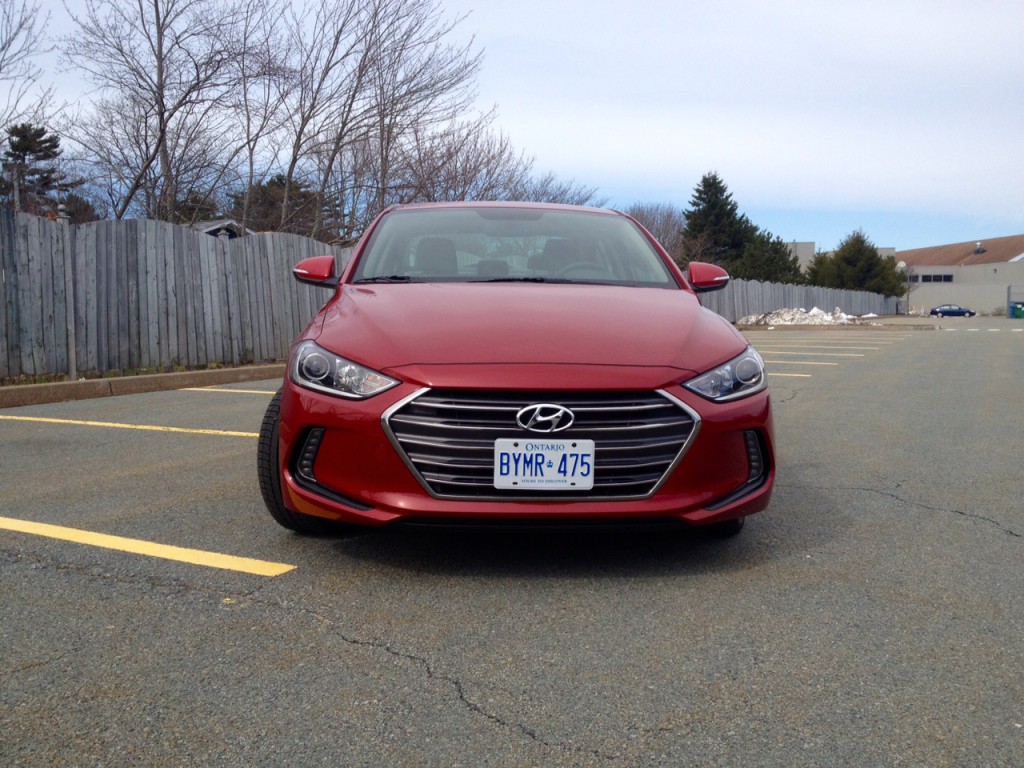 You’ll find a 2.0 litre 4-cylinder under the hood of the Elantra which produces 147 horsepower and 132 pound foot torque. For most people, this engine is perfectly adequate and does the job the way most people would expect it to. But the big problem I see is that it’s the only engine available. And, I’m sorry, if you’re going to shell out $28,000 for what is still technically a compact car, then you better get an engine upgrade along with it, or at the very least have the option to do so. This is where the Civic can land an upper cut in the sales war as the new turbocharged 1.5 litre engine available on the upper train levels is sublime. Even the CVT, typically referred to as the direct spawn of satan, works in tandem brilliantly. And on top of that, a six-speed manual will be available with the new engine in 2017 (the real 2017). 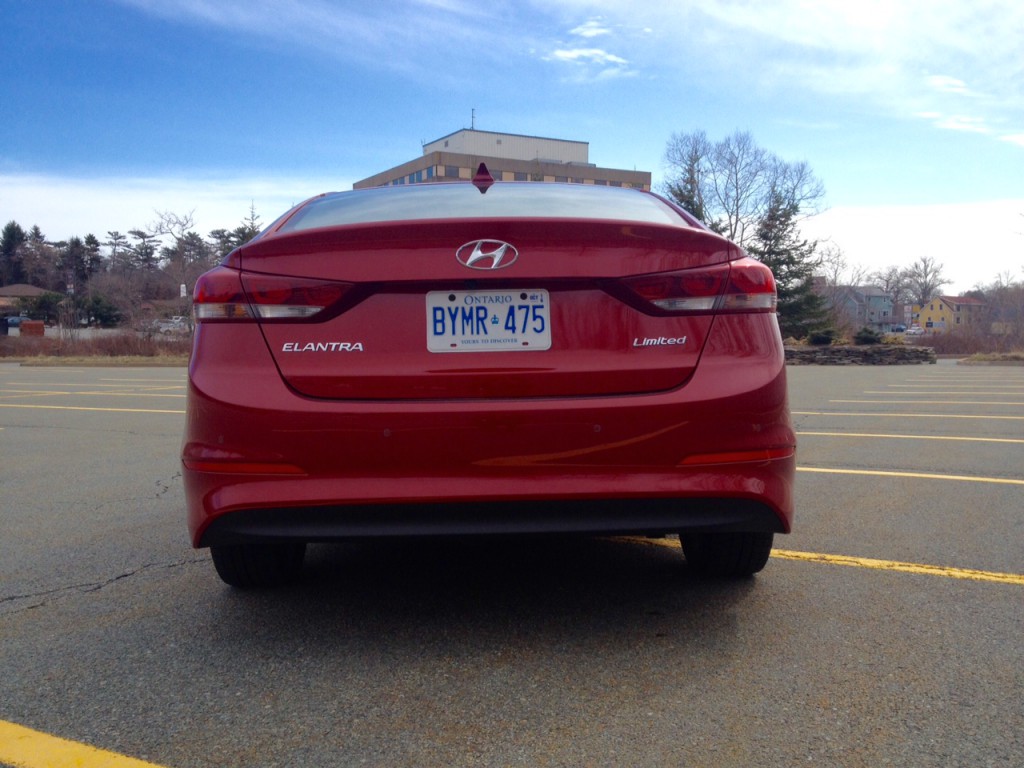 It’s a bit of a shame because it’s not as if Hyundai doesn’t have the units to choose from. In the United States, the new Elantra can be had with a 1.4 litre turbo matched to a seven-speed dual clutch transmission. That has the potential to be a bit of a game changer in the segment, but alas us Canadians will never know unless Hyundai plans on introducing it next year. Which would be, uh… 2018? Even though it’s actually going to be 2017? See what happens when you mess around with the model years too much?

Anyway, on top of the lack of engine options is the lack of transmission options too since the manual can only be had on the base trim for some reason. Any other model gets a six-speed automatic which is admittedly better than most CVT’s but people in this segment still have an interest in rowing gears themselves and they also don’t want to sacrifice must have features in order to get it. 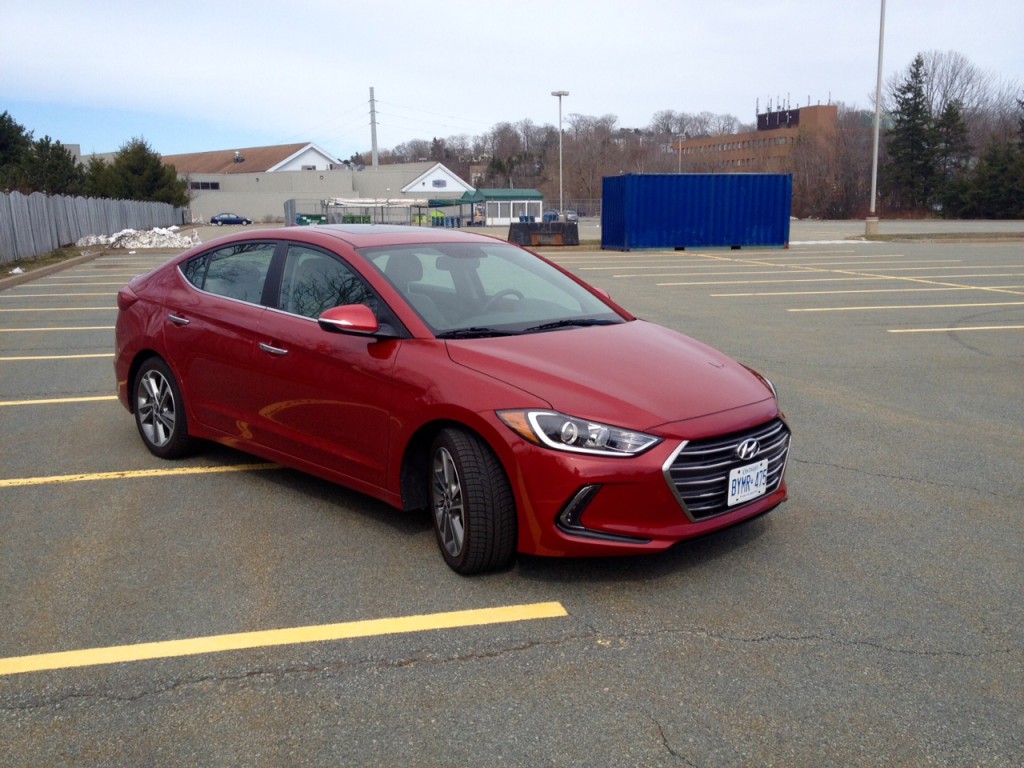 That engine does a good job of being smooth and keeping quiet but when you put your foot down to merge onto a highway for instance, it does become quite loud and intrusive to the cabin. Once you get up to speed, the engine settles down and you’re now in for a comfortable and solid feeling long distance drive. Should you meet any imperfection in the road along the way the Elantra, for the first time ever, handles them with grace. I used to have a big problem with how hollow feeling the suspension was in previous Elantras but that feeling is almost all but gone now. It’s clear Hyundai’s engineers put in some serious work in this regard and it has paid off. That solid feeling I mentioned earlier is also because the engineers stiffened the body structure. 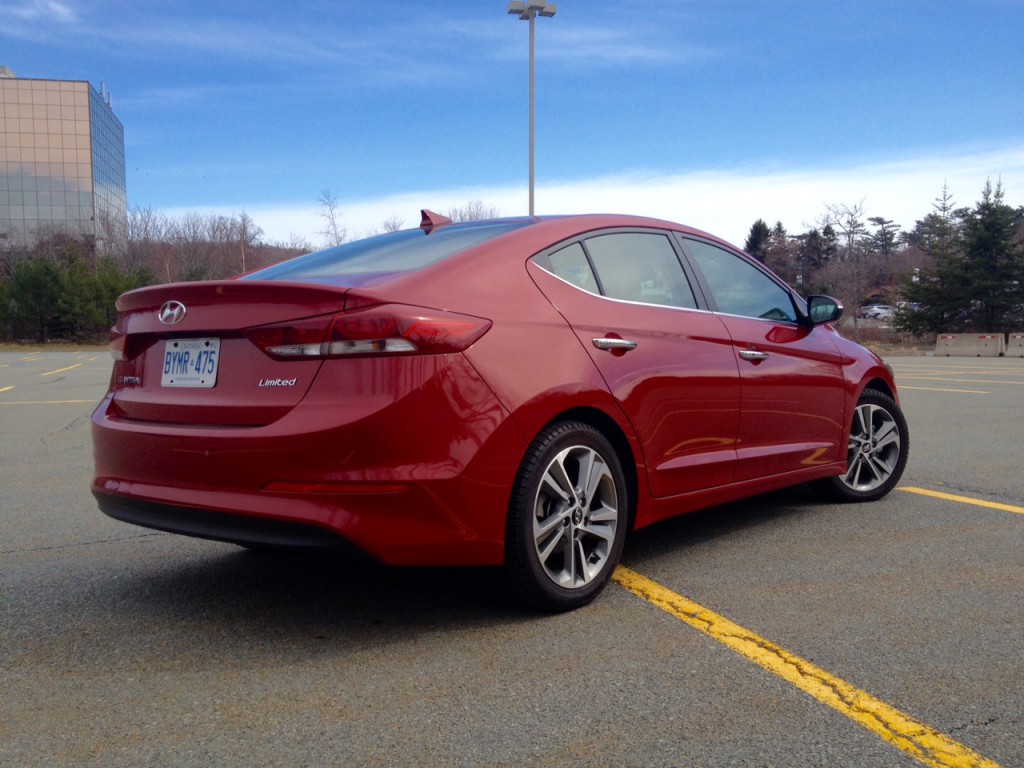 The trade off to this comfortable drive is less fun in the bends. For someone like me that’s a bit of an issue but for the majority of the population, they likely won’t even notice the lack of feedback from the steering wheel or the understeer. Besides, for those who want a drop more fun added in, they can select sport mode which does in fact provide a bit more steering feedback (though it feels stupidly artificial) and holds onto the revs longer. 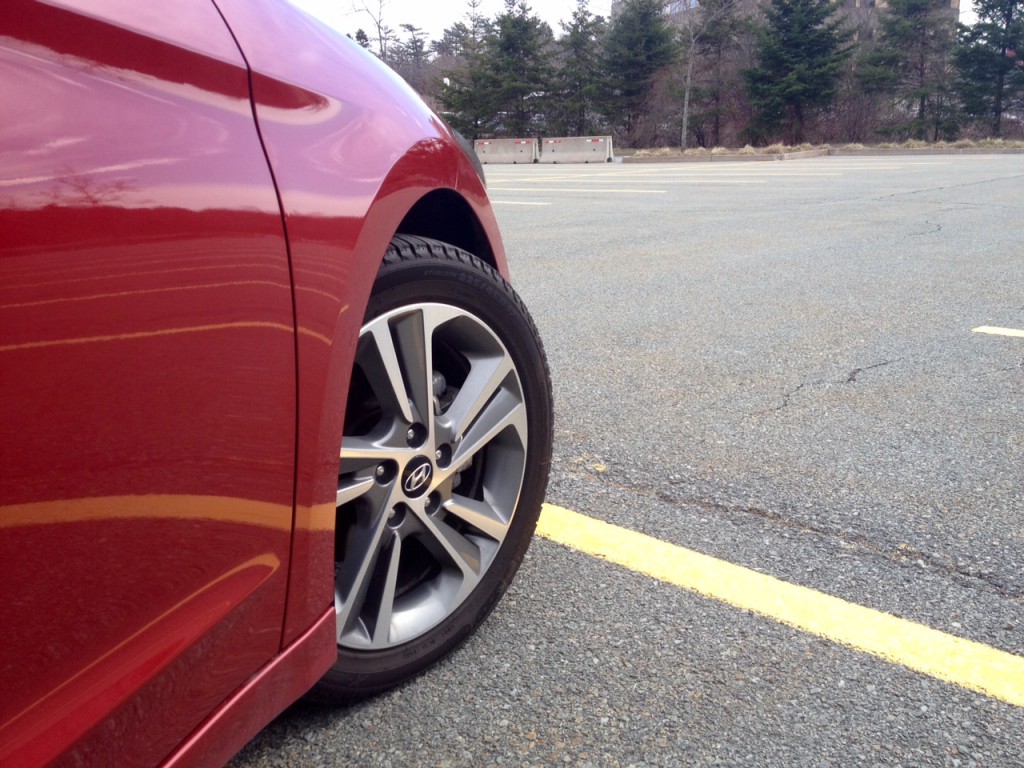 A strong point for the Elantra is real world fuel consumption; something that Elantra owners were typically disappointed with in the past. I’m pleased to report that in real world mixed driving, I returned 7.1 L/ 100 kms which is well better than the 8.3 L/100 kms official city rating. The official highway ranking lands at a respectable 6.5 L/100 kms though something tells me that figure could be easily beat as well if you keep it in eco mode. 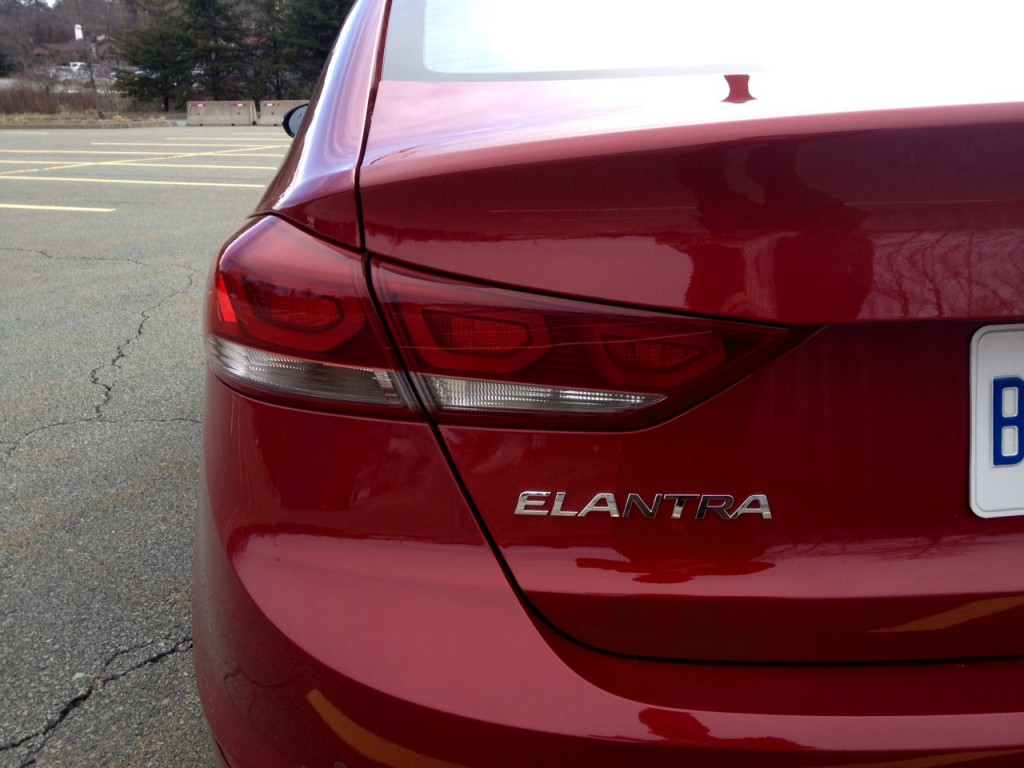 While Hyundai may not be able to play the looks card as much any more, it’s clear that the Elantra is still the value king even if you can spec one out beyond thirty grand. And now that they’ve sorted the ride quality to go along with the well laid out interior and improved fuel consumption, it’s certainly still worth a strong look. Is it better than a Civic? Well I know which one I would buy but the real question is: can it take that number one spot? If I were a betting man, I’d probably put down some money on it, but whether or not it could keep that spot with the impressive redesigned Civic making the rounds is another question altogether. 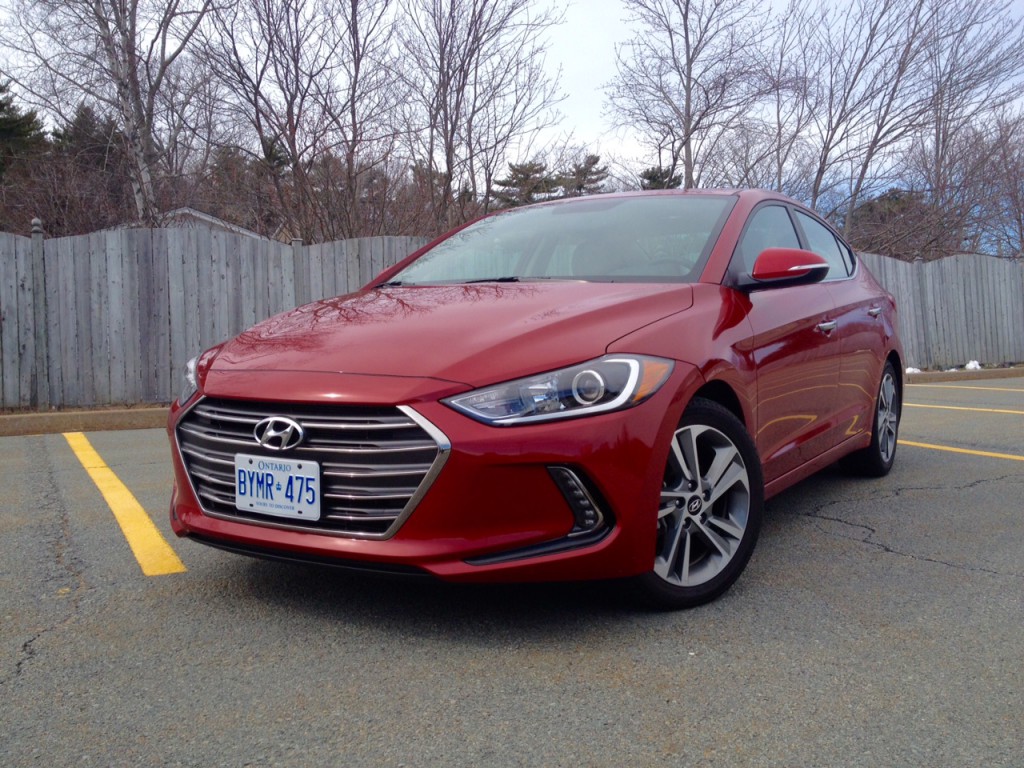