When I first told a few people that the subject of this upcoming review has going to be a minivan, laughter immediately followed.

Some relished in the fact that, for once, I wasn’t in some fancy German sedan, or hot hatch (to those who did, jealousy doesn’t suit you). Others felt sorry for me.

I have to say, I don’t really understand this mentality. While minivans are fairly far from having the kind of cool factor of a new Mustang, they certainly do a good job at their main function. In fact, I would argue that the minivan makes a hell of a lot more sense than 90% of the SUV’s you see on the road today.

But despite the smart practicality of a minivan, most manufactures aren’t even bothering to sell them anymore. Nissan, Hyundai, Ford and GM have all gotten out of the minivan business.

On top of that, the bestselling minivan, the Dodge Grand Caravan, recently failed to make the cut for Fiat Chrysler Automobile’s future product strategy. But that’s not to say Chrysler has completely given up on the minivan.

Case in point, this brand new entry: the Pacifica – which takes over from the Town & Country. Since Dodge can be credited for making the first minivan popular, and has continued to make innovative and segment changes alterations over the years, the Pacifica definitely has large shoes to fill. 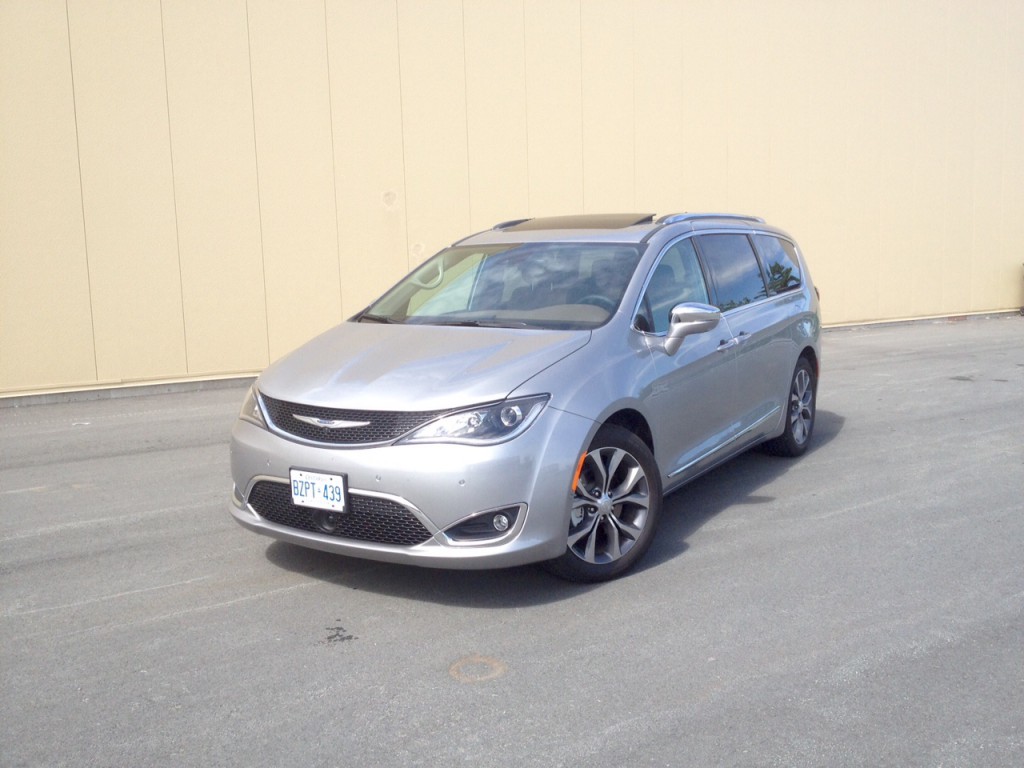 The designers of the new Pacifica likely were tasked with a bit of a tough job as there’s only so much you can do with styling before it starts messing with the practicality of the minivan. In this case, they should be applauded with their efforts.

The new design could likely be called best in segment. The front end sports a look markedly similar to the front end of the outdoing 200 sedan and it fits the minivan figure well, with curvaceous, flowing lines that transcend nicely into the rest of the body. My tester came with optional 20 inch wheels which helps the Pacifica to stand out a bit more in side profile, which itself is eye-catching with the higher belt line and raked front windscreen.  The designers added little touches that make a huge difference too. For instance, the track for the side sliding doors is integrated into the lower trim line of the side windows making for a very clean look. The black bezel on the tail gate and surrounding the LED tail lights also look sharp.

While this is a very good looking minivan, it still likely won’t cause anyone to give themselves whiplash as you drive by. Overall, though, a job well done. 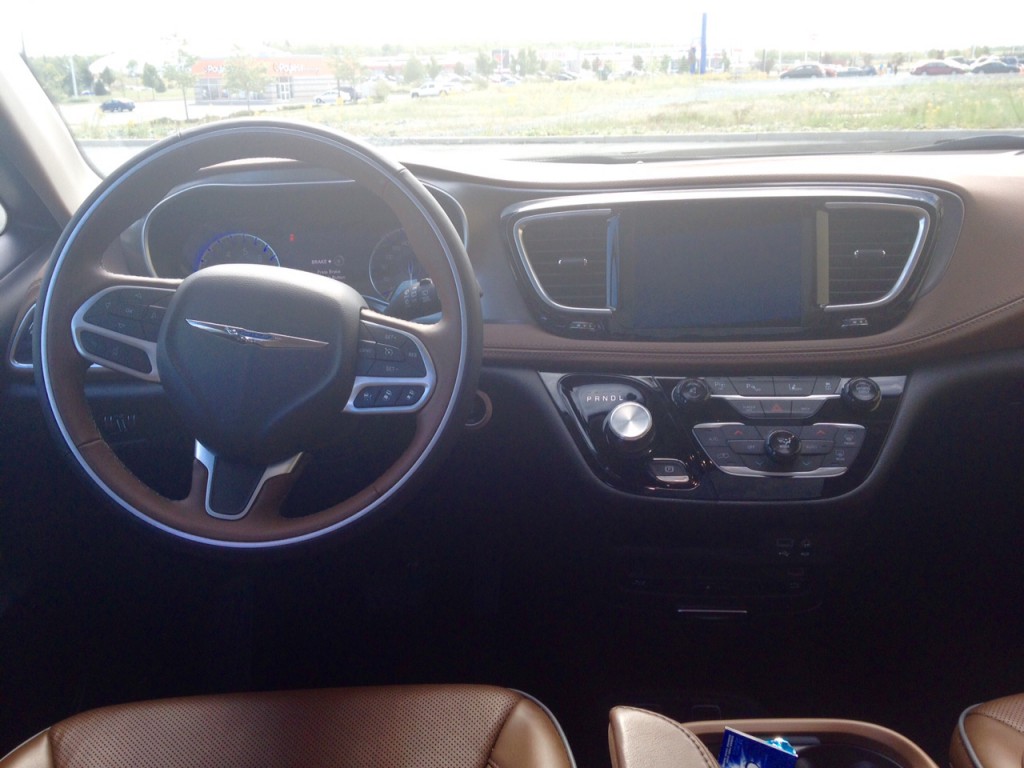 The all new design is quite eye catching as well, and not just due to the contrasting dark grey and brown leather treatment of my tester. The wheel is comfortable and features toggle switches behind it to control the radio functions. It might seem off-putting to use switches that you can only feel – not see – but you instantly get used to it and appreciate how much it logistically makes sense, especially since it helps keep your eyes on the road and your hands on the wheel.

Equally easy to get used to is the rotary gear selector, though the electric parking brake, which is just a button, takes more time to get used to. Otherwise the dash layout is attractive and functional. Chrysler’s excellent U-Connect infotainment system is still clear and easy to use, but certain things like accessing climate controls can be a two to three step process. 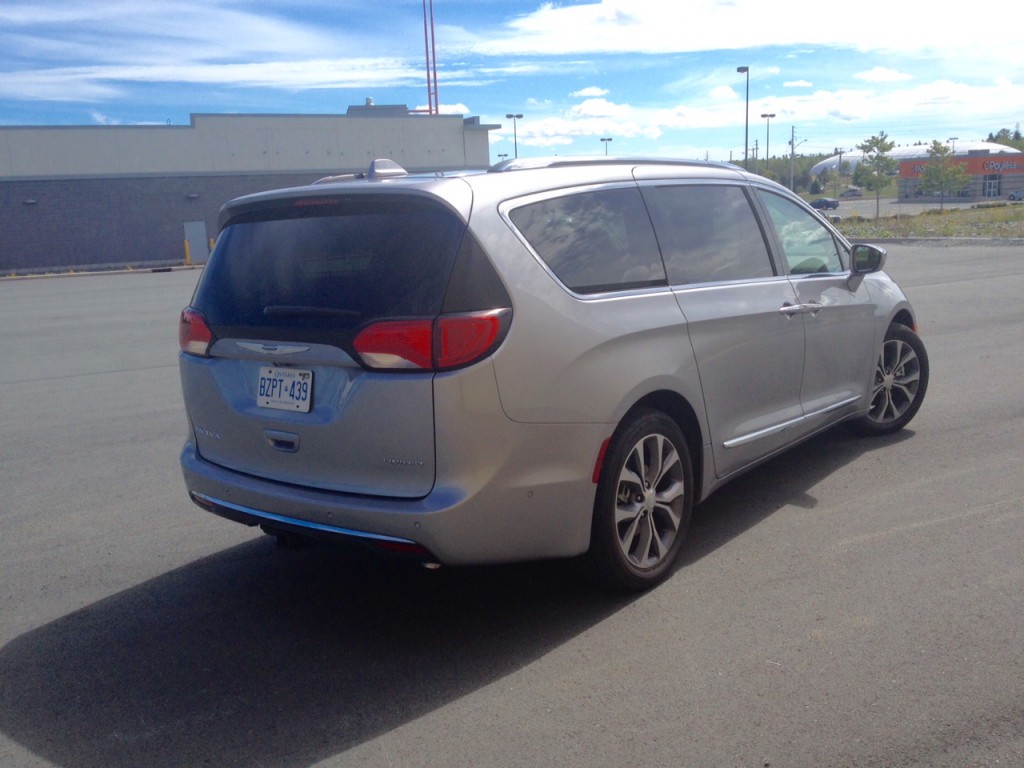 My tester came fitted with a 20-speaker Harmon Kardon sound system, presumably to help drain out the “are we there yet?!” cries from the back. If that doesn’t work, there are screens for second row passengers to entertain themselves in the form of movies, apps and games. Some games are even educational.

While the captain’s chairs up front offer good, if slightly firm levels of comfort, the second row seats seat to suffer from awkward cushioning placement. Access to the third row seats isn’t too bad and stowing them is as easy as pushing a button. While it is less strenuous, it is also more time consuming as the electric motors are definitely in no hurry to stow the seats. Once the second and third rows are eventually tucked into the floor, the space is more than just useful, it’s downright cavernous. This cargo space bests most, if not all SUV’s. 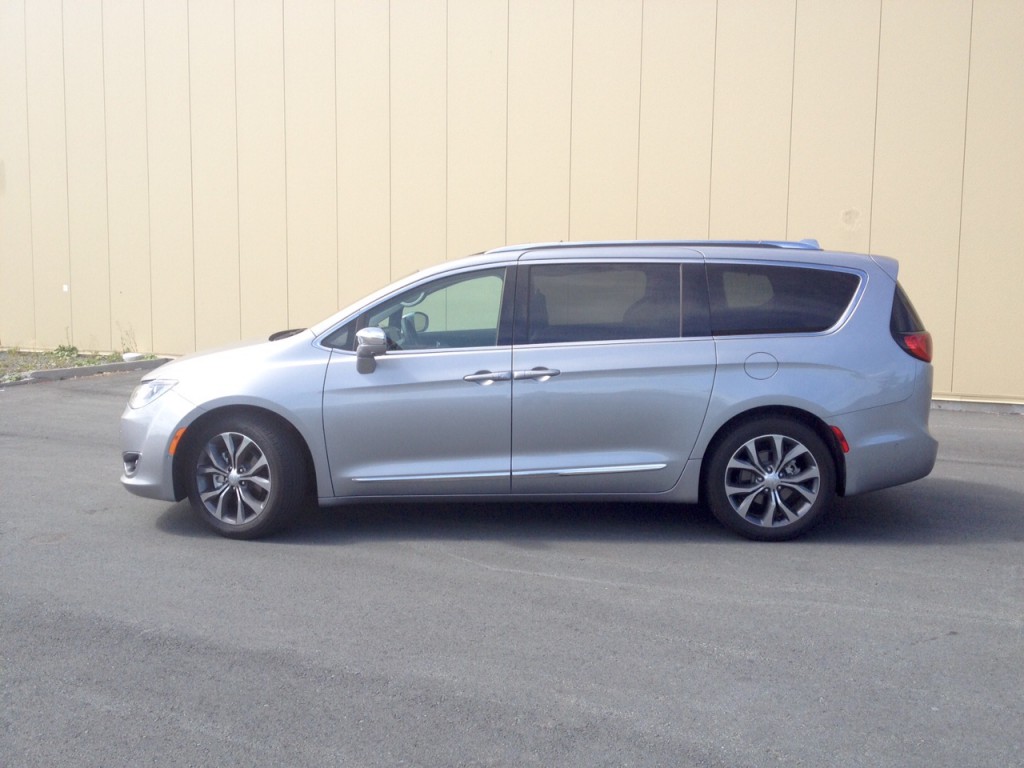 You’ll get a 3.6-litre V6 mated to a 9-speed automatic transmission. This engine is good for 287 horsepower and 262 pound feet of torque. This will be plenty of power for most minivan buyers, but the award winning Pentastar engine is sometimes let down by its transmission pairing. The transmission can do the job adequately until it suddenly can’t. You’ll be puttering along on the highway for instance; all smooth sailing when you need to pass a slower moving vehicle. The transmission becomes unsure of which gear is best to be in and is second guesses itself causing some lag. It’s almost as it panics a bit, and when it finally does decide on a gear, it gets switched harshly – a big difference from the otherwise smooth gear changes it used to get you up to speed in the first place. It’s not a completely terrible transmission, just a bit unpredictable. I would suggest that Chrysler needs to work on it a bit more to make it more refined. 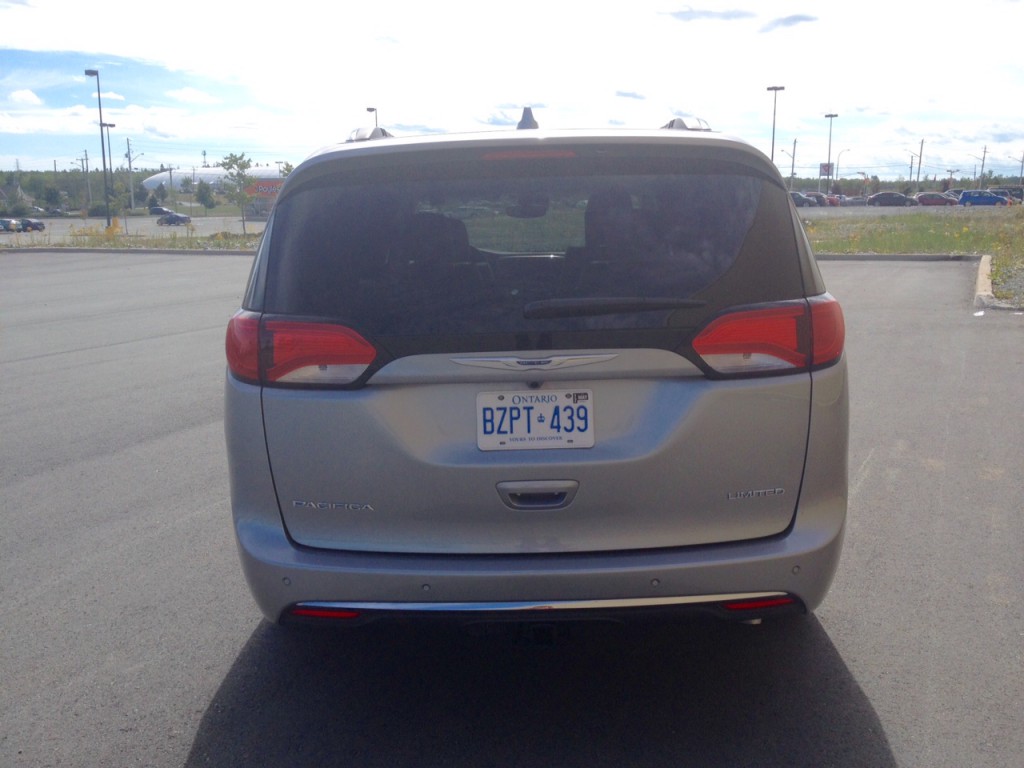 The Pacifica is a large vehicle and it feels it. Thankfully, the tarted up Limited trim gets gizmos that make parking easier such as sensors, a back-up camera and an overhead bird’s eye view camera. It can even parallel park itself into a spot so that you can hold off on popping your anxiety medication.

The good news continues on the open road with steering that feels tuned more for performance and handling that really isn’t that bad relative to its size and weight (by the way, the Pacifica is the lightest of all its rivals). Body roll is present but not overly so and despite those 20 inch wheels, ride comfort is good more often than not. On the highway, it feels solid and exudes confidence to the driver. 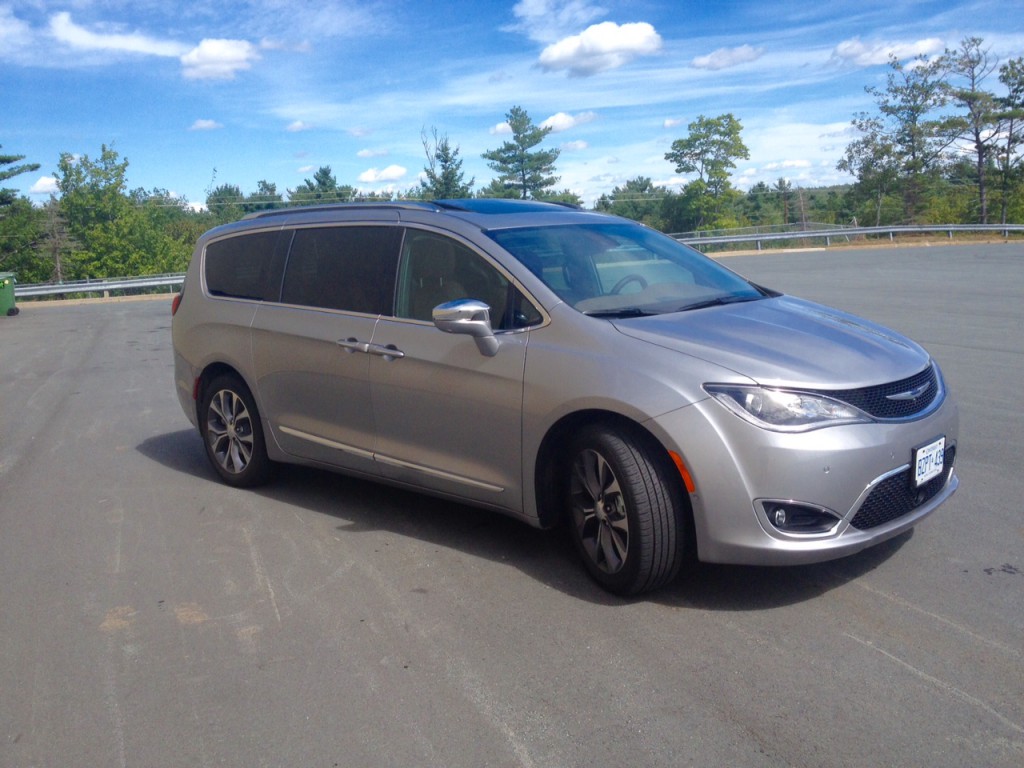 The official numbers of the Pacifica are 12.9 L/ 100 kms city and 8.4 on the highway. I returned a rather impressive (again, for its size and engine) 10.6 L/100 kms in mixed driving. I didn’t particularly watch the way I drove it either.

If you’re hoping to save even more gas, Chrysler is going offer a hybrid version of the Pacifica – the first ever hybrid minivan. While it has not released official fuel consumption figures yet, Chrysler does say that it will achieve an estimate 850 kilometres on a full tank and charge. The downside is it won’t come equipped with stow and go seating as Chrysler needs that space underneath the floor for the batteries, so you’ll take a fit with versatility. The Pacifica Hybrid is not out just yet, so you’ll have to wait a few more months if you’re interested. 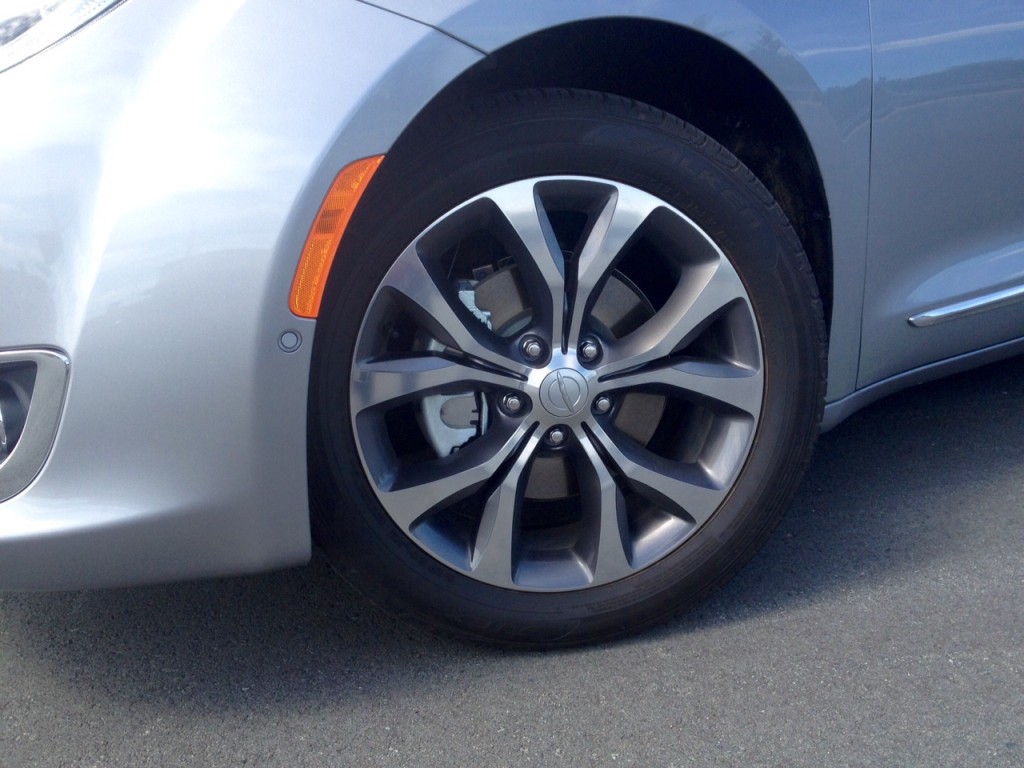 While I was nowhere near the envy of my friends, I very much enjoyed my time with the new Pacifica. Not only is it a marked improvement over the tired Town & Country, but it also can likely claim itself as best in class in a few categories such as refinement, and driving dynamics. It’s also one of the best looking both inside and out to boot and can easily embarrass your SUV for versatility.

The minivan segment might not be booming, but in my opinion, it is still relevant and Chrysler is proving with this new Pacifica that it still has a lot of cards up its sleeve to retain the minivan sales king title.