I was recently asked to explain my adoration for European styling, specifically, German styling. The individual who asked is an aficionado of Japanese cars, including their designs. He finds them to be modern, sleek, and conspicuous. By contrast, he finds German styling far too conservative, dull, and unassuming.

To explain his point, he used my tester for the week, which started the whole conversation in the first place, the brand new Audi A4.

He said it looks just like any regular old sedan. No curvaceous lines, no slicked back headlights or eye-catching wheels, despite my tester being fitted with optional 19 inchers. While I might concede to not being a fan of the wheel design as well, it is for entirely different reasons. To me, the design is a little too Japanese with its pencil thin spokes. 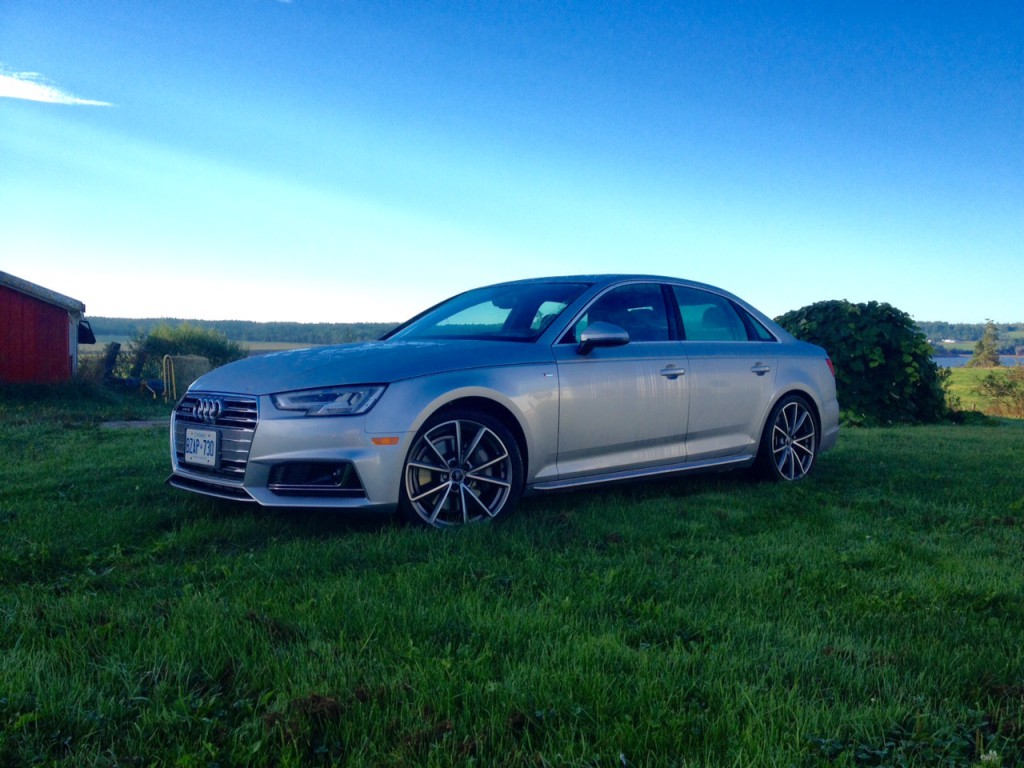 But to explain why I love conservative designs by European makers, I directed him to the line which spans the entire length of each side of the car.

He took a moment to examine the line and responded with, “so what, most cars have lines like that down the side”.

I made him look harder. He still didn’t catch it.

If you look closely, that line actually blends in perfectly to where the cut for the hood is. Most cars don’t have lines like that. I popped the hood to make it more obvious. 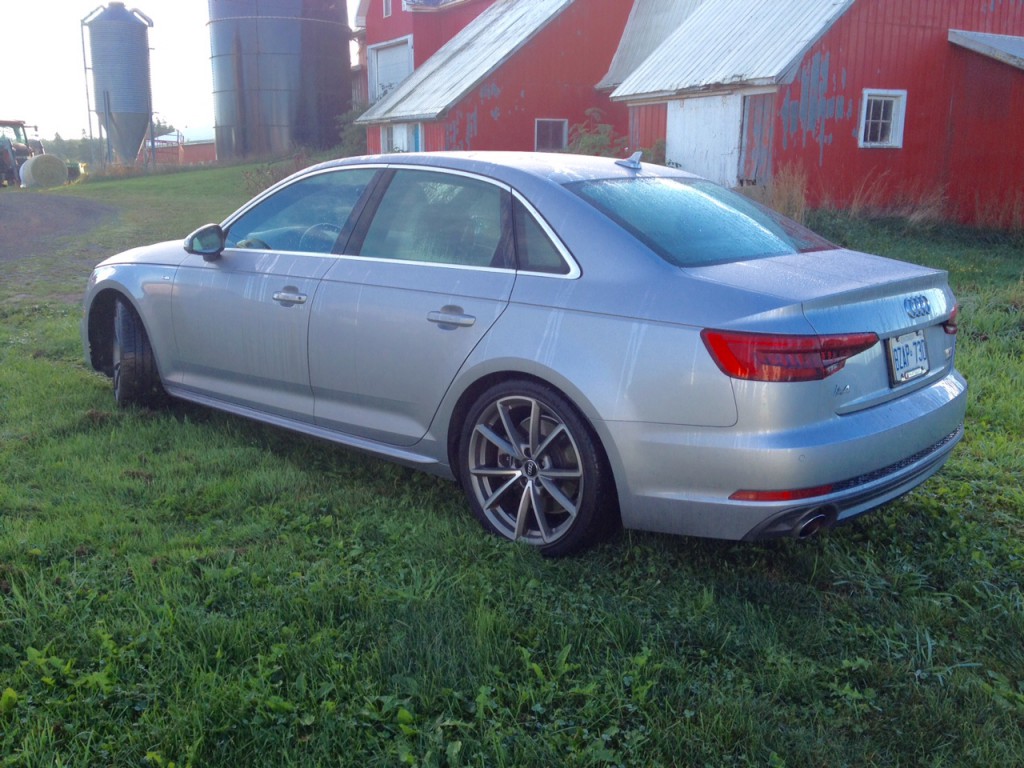 Now, a line on a car that is seemingly unnoticeable to most is why I like German styling. The Audi designers had to specifically re-engineer how the hood opens just to get that perfect crease. They had to attach an extra joint which propels the hood up and away from the rest of the body, so that the hood doesn’t catch against it, scratching the paint. They went out of their way to create a solution for a problem that didn’t need to exist in the first place, all in the name of style. To me, that’s far from being conservative.

Besides, the designers at Audi had to do something to help differentiate it from the previous generation because the new one looks an awful lot like the old one. Aside from redesigned headlights and tail lights (which still look fairly similar to the old model), you’d be forgiven if you couldn’t immediately spot the difference between the two.

But the new A4’s new look remains striking from almost any angle. 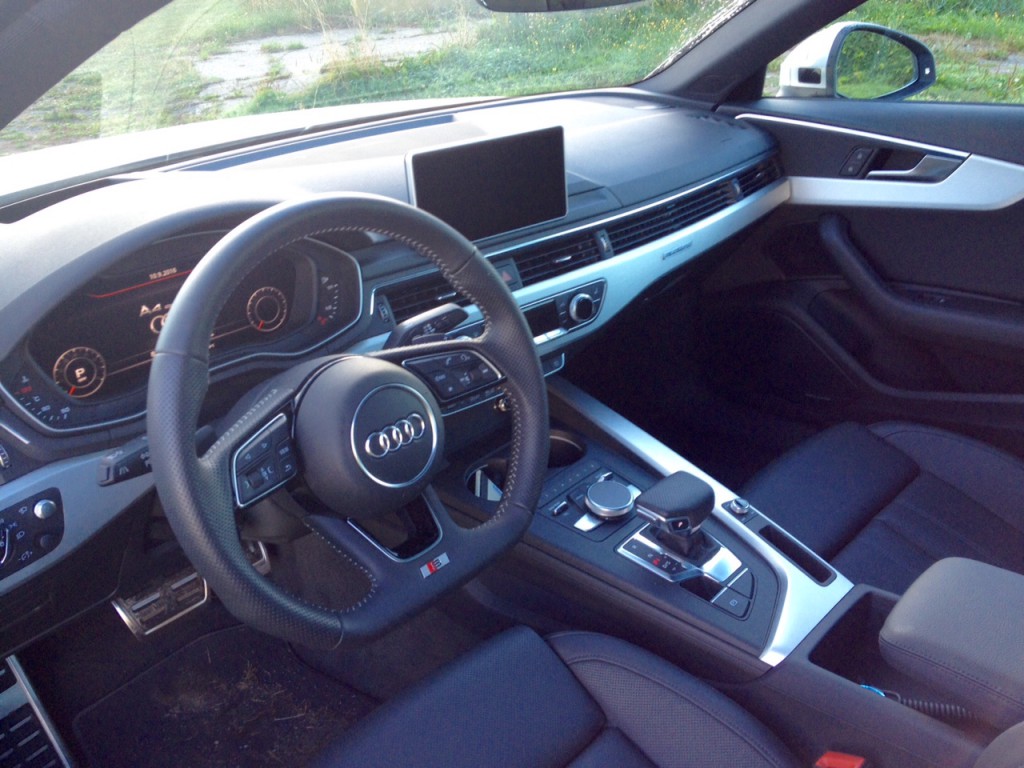 Happy the same can be said for the interior. Its design is refreshed to add more splashes on contrasting trim colours along with a bigger screen that sits atop the dash as oppose to rise out from it. It doesn’t quite have the same feeling as being an afterthought like in other German cars *cough* Mercedes *cough*, but an integrated unit would provide a cleaner look. Luckily the operation of the infotainment system is easy to use and the dial between the seats actually makes for good placement.

Also new is the shifter which I personally didn’t have any issues with, however some might as it is electronic and uses a button to put it in park. It’s operation may throw some off in the same way Chrysler’s T-shifter does, however I got used to it fairly quickly. It’s big and grippy and is the perfect shape and height to rest your wrist on as you use the control knob. 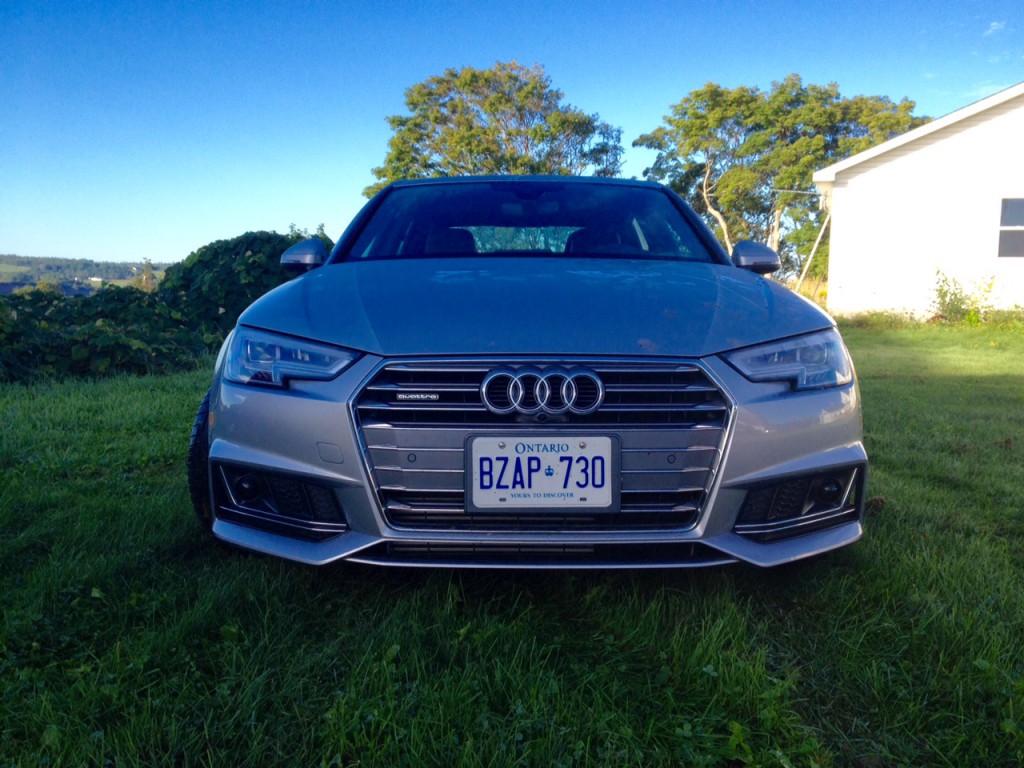 Perhaps the biggest change is the large and very configurable screen, or the virtual cockpit as Audi puts it, behind the wheel which takes the place of fixed dials like in traditional cars. This concept originally debuted on the TT and it seems is if it will trickle down to most models. The setup is clear, and easy to read.

Seat comfort is good with adequate bolstering, though if you’re looking to do more aggressive driving, you may need to hang on a bit. Rear leg room is oddly a bit snug considering this is the longest version of the A4 ever produced and the centre hump is rather intrusive. Still, the rear seats would likely do the trick for most if traveling with only two rear passengers.

Build quality overall is very much in line with the A4’s price point. 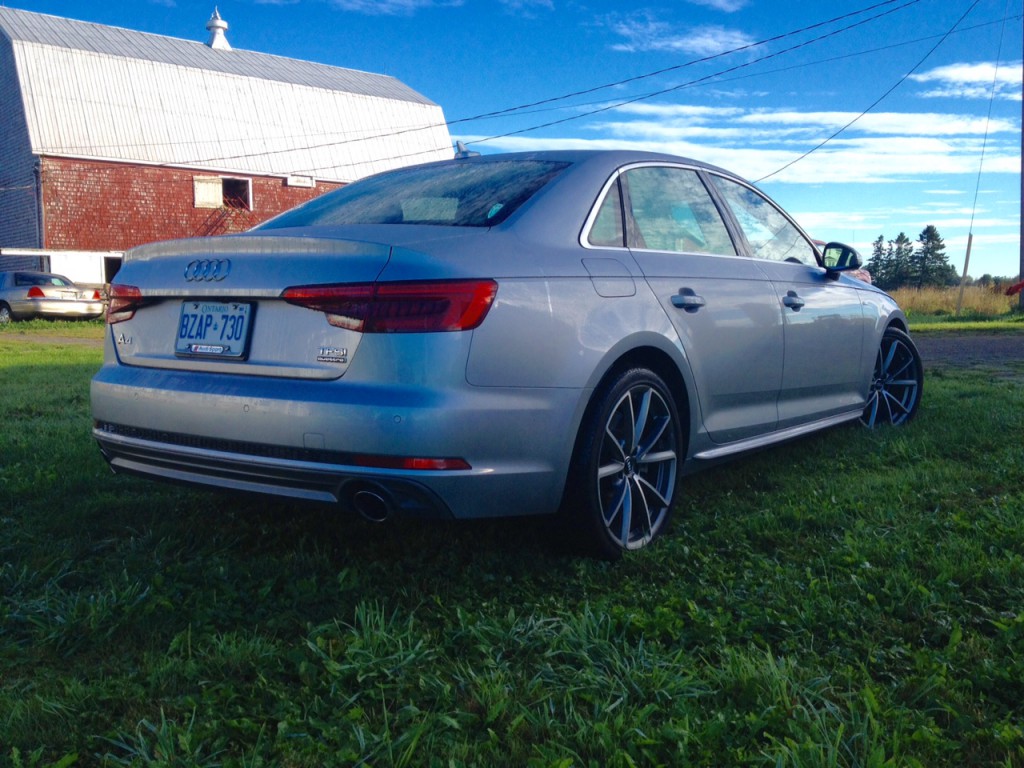 The A4 only gets one engine option and it’s a 2.0 litre turbocharged 4-cylunder which makes 252 horsepower and a healthy 273 pound feet of torque. If you want more power than that, you’ll have to step up to the S4 which will net you a V6 with over 300 horses. If you were hoping to row the gears yourself with the assistance of a third pedal, you are out of luck as the A4 comes standard with a 7-speed dual-clutch automatic. This is a noble transmission when you get up to speed but it is noticeably laggy when starting from a complete stop.

The engine itself has similar issues in how it operates between getting up to speed and staying at idle. It is smooth and refined on the highway, but it is a bit noisy at idle. 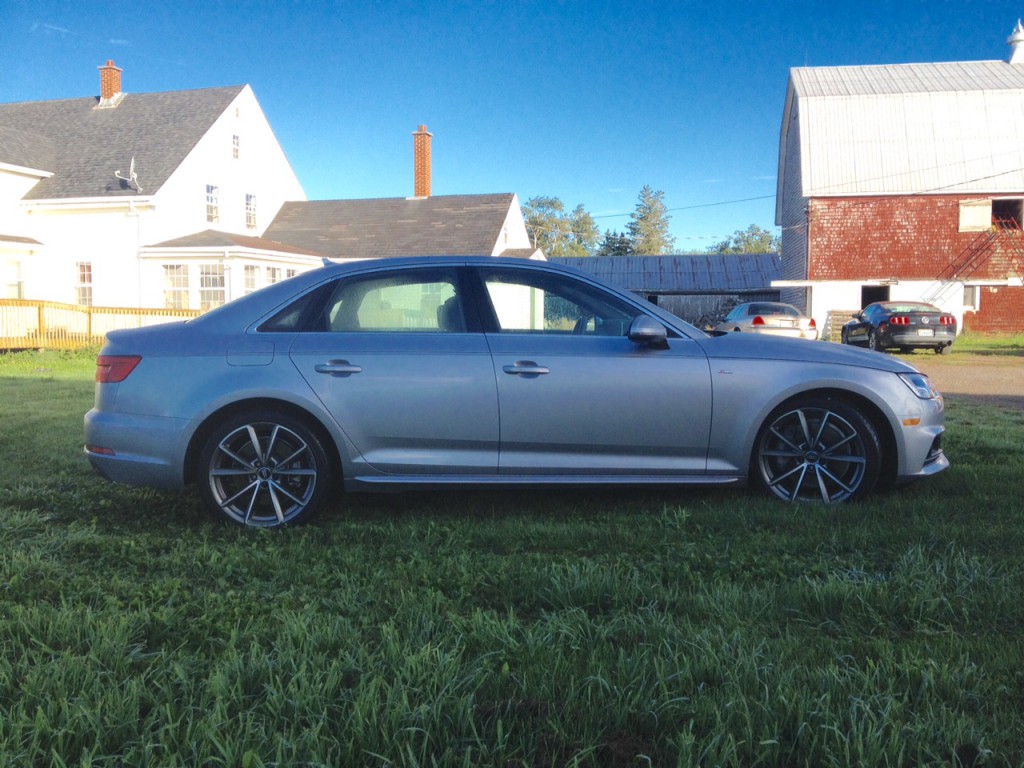 Once the transmission sorts out its delayed response to throttle input, the A4 can propel itself forward with gusto while maintaining its refined composure. Shifting through gears manually is a pleasure as shifts are quick.

On the highway, the A4 is a pleasure to drive with its rock-solid feel and responsive steering. Match this with all the typical driver aids such as blind spot monitoring (located smartly on the inside of the mirror itself), to the adaptive cruise control and lane keep assist. Yes, you’ve heard me drone on and on about driver’s aids before such as self-parking vehicles, but on long highway drives, they make a fair amount of sense. The A4 is able to achieve almost Buick-like levels of quietness as road noise is kept to a minimum.

In the bends, the A4 won’t disappoint most either, however if you really push it, the A4 can produce some slight understeer. Feedback remains impressive and the design of the wheel ensures a good grip is maintained. But unless you plan on putting in some hard track time, regular bends in the city and highway will not throw off the A4 in the slightest. 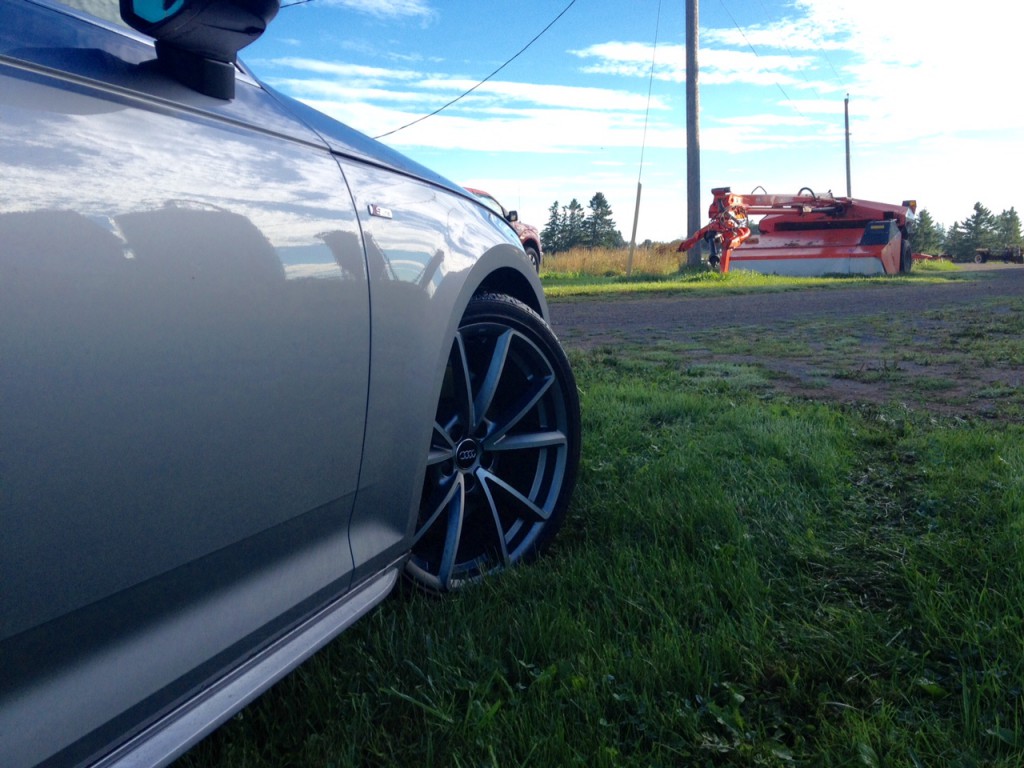 There is a reason why the regular A4 no longer offers a V6 and it largely has to do with fuel efficiency. The engine is rated at 9.9 L.100 kms city and 7.7 highway. In mixed driving, including a 2 hour road trip to rural Nova Scotia, I managed 8.7 L/ 100 kms. For a capable sport sedan, that is fairly good. 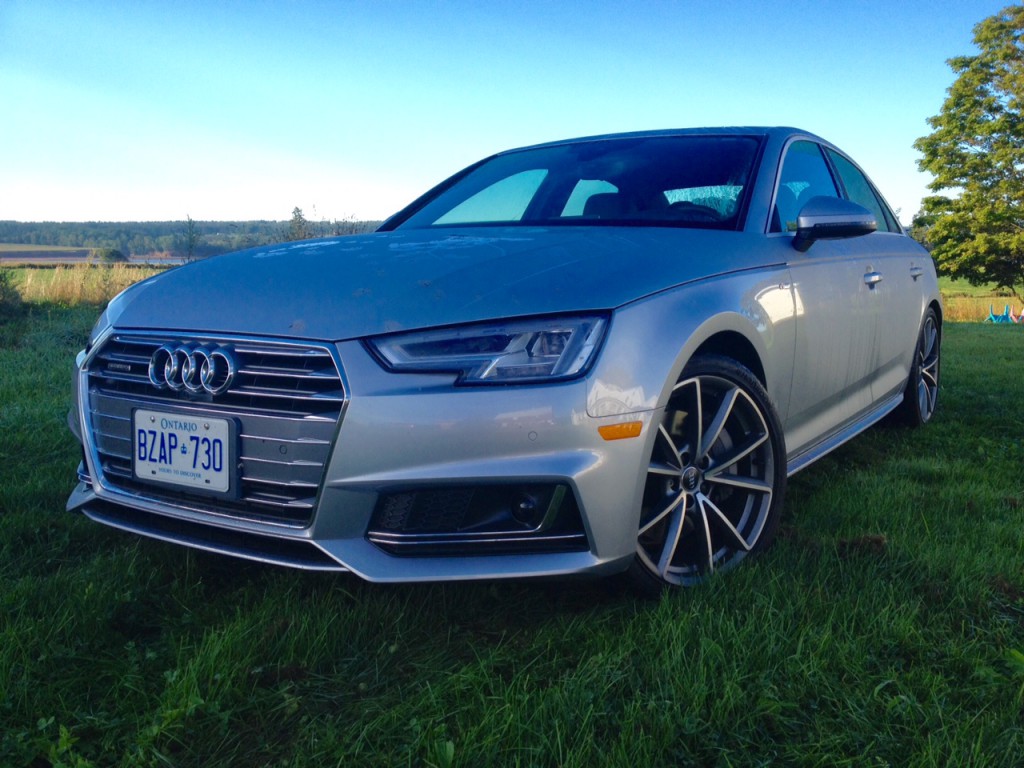 The A4 has always been a significant player in the compact sport sedan segment, though the leader has always been considered to be the BMW 3-series. As the 3-series improved upon itself, so did the A4. In a way, it reminds me of this past summer Olympic Games in Rio, specifically the men’s 100 meters where Usain Bolt is the crown holder but the formidable Canadian, Andre De Grasse, has to remind him not to get too cocky. There is still plenty of competition worthy of the crown and all too willing to take it given the chance. 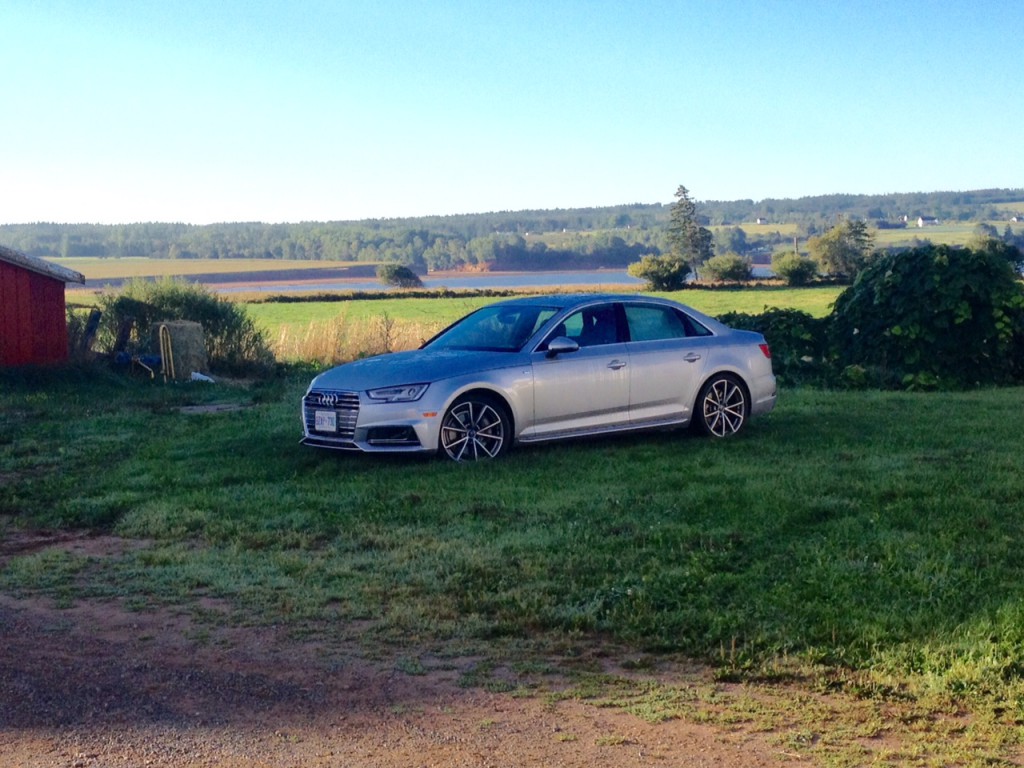