In 1794, the first ranch was established in Texas. Why do you care? You don’t. But Toyota does, so much so that they have named their most opulent trim of the Tundra after that year.

You see, now in 2016 Toyota has a manufacturing plant in the exact same spot that the aforementioned ranch was established. That’s where they make the Tundra.

Still scratching your head? Well, apparently Toyota is desperate to cling to any kind of American roots. In the pick-up truck world, especially the half tonne world, American makes are completely dominant.  Ford, GM and Ram are the BMW, Audi and Mercedes-Benz of the truck world and Toyota, who has been a player in the segment for some time now, thinks people buy trucks from the domestic brands because they are American. Hence why they want everyone to know about their piece of American history, even if it is reaching by a fair margin.

Does the 1794 edition have what it takes to bring loyal domestic truck buyers into Toyota showrooms? 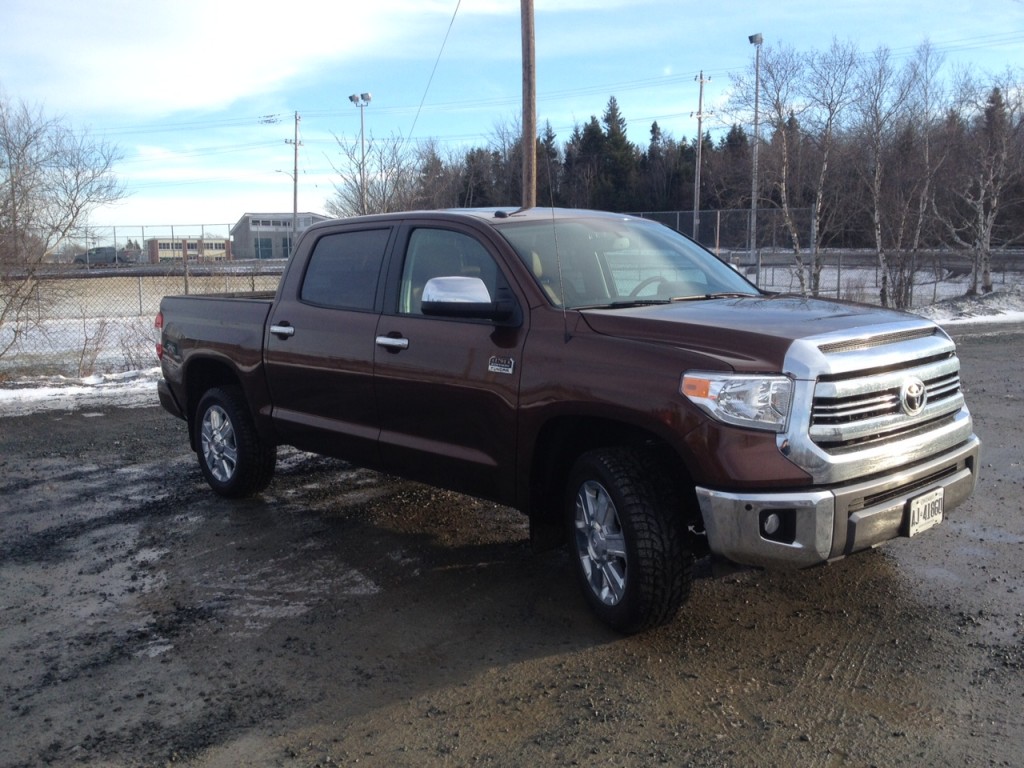 The Tundra was redesigned for the 2014 model year and it was clear even back then that they were taking aim at the domestics. Now as large as the American offerings, the Tundra sports a massive grille to go along with its rather masculine look. The 1794 edition nets it 20-inch chrome wheels, a chrome bumper and my tester’s Sunset Bronze Mica paint option. 1794 edition badging completes the look. While it’s clear the 1794 edition is the top trim of the Tundra based on looks alone, the American makes offer up a lot more visual appeal for their fully loaded models.

The bed seems a bit on the small side measuring five and a half feet, but Toyota does offer two bigger bed sizes – however they are not available on the top Platinum trim levels. The tailgate is dampened with is a nice way to give your triceps a bit of a break, but getting inside the bed requires your thighs and calves to do some work. There is no handy step build into the tailgate like with the F-150 or a step indented into the bumper like on GM trucks. 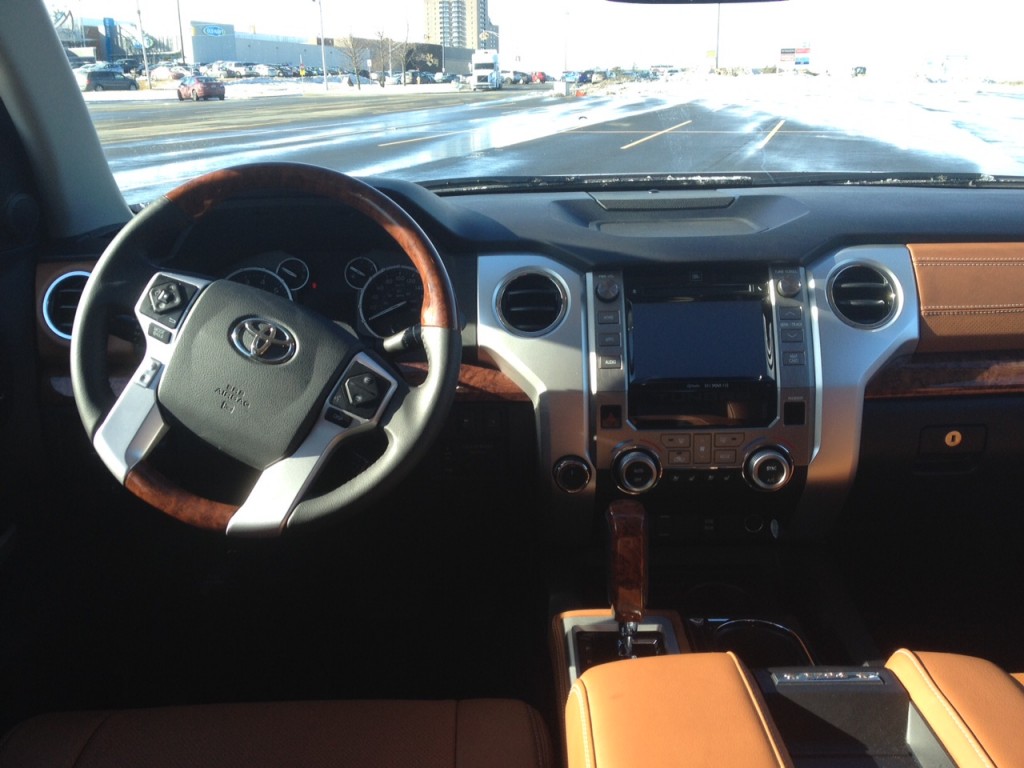 Inside things are a lot more in line with the price tag. The 1794 edition gets wood grain on the gear shifter and steering wheel while the seats are a leather-suede combo with a sand-caramel finish. This is the closest you’ll get to a Lexus-like interior in a pick-up truck.

Thankfully, Toyota has moved the centre stack three inches closer to the driver for easier access, but I still found some of the controls on the centre stack to be a bit out of reach. Luckily they are simplistic and logically laid out. The centre console is large like its American rivals; you can easily fit a laptop or a gallon of milk in there without any issues. On top there is a spot to put your cell phone, but oddly enough, its placement isn’t symmetrical. 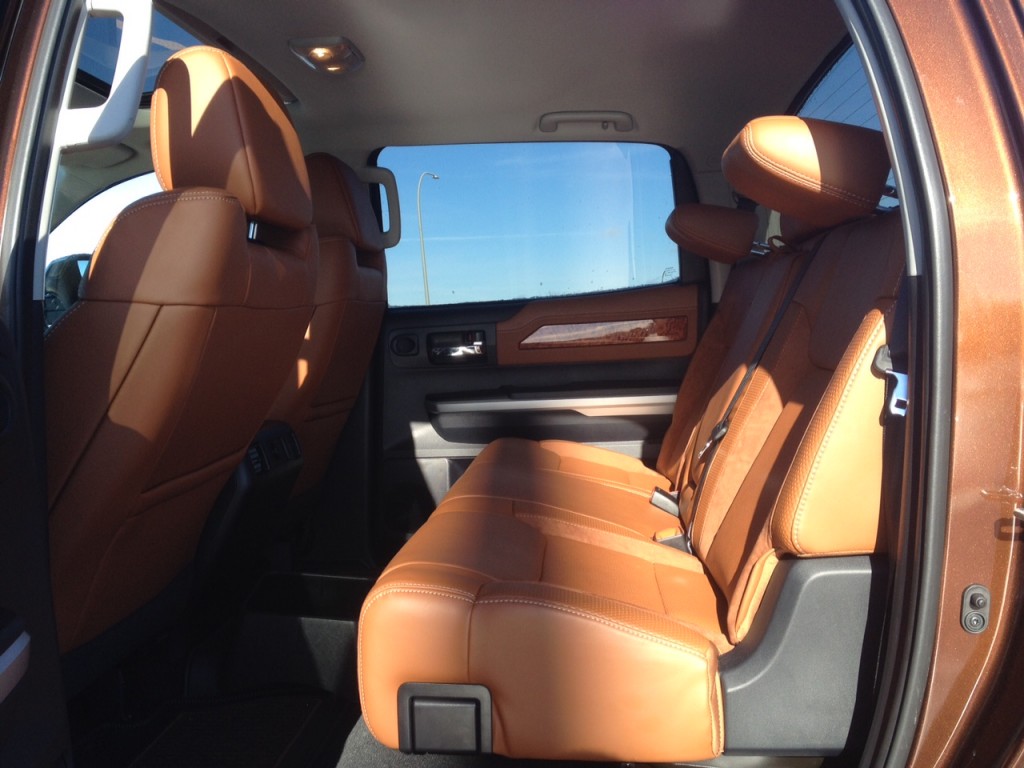 Seat comfort is on par with Lexus and I was happy that I could adjust the driver’s seat to my liking without much fuss. Rear seat comfort is just as good and while I don’t think anyone can currently compete with the limo-like rear legroom of the F-150 super cab, rear passengers will not be complaining of any lack of room. The rear seat bottoms easily fold upward to haul taller items. One thing that has been a Tundra feature for a long time now is the ability to wind the rear windshield down completely. The domestics only offer a small passthrough at most. This helps to haul long items that may not completely fit into the five and a half foot bed. Alternatively, it might provide a nice airy feel in the summer time. 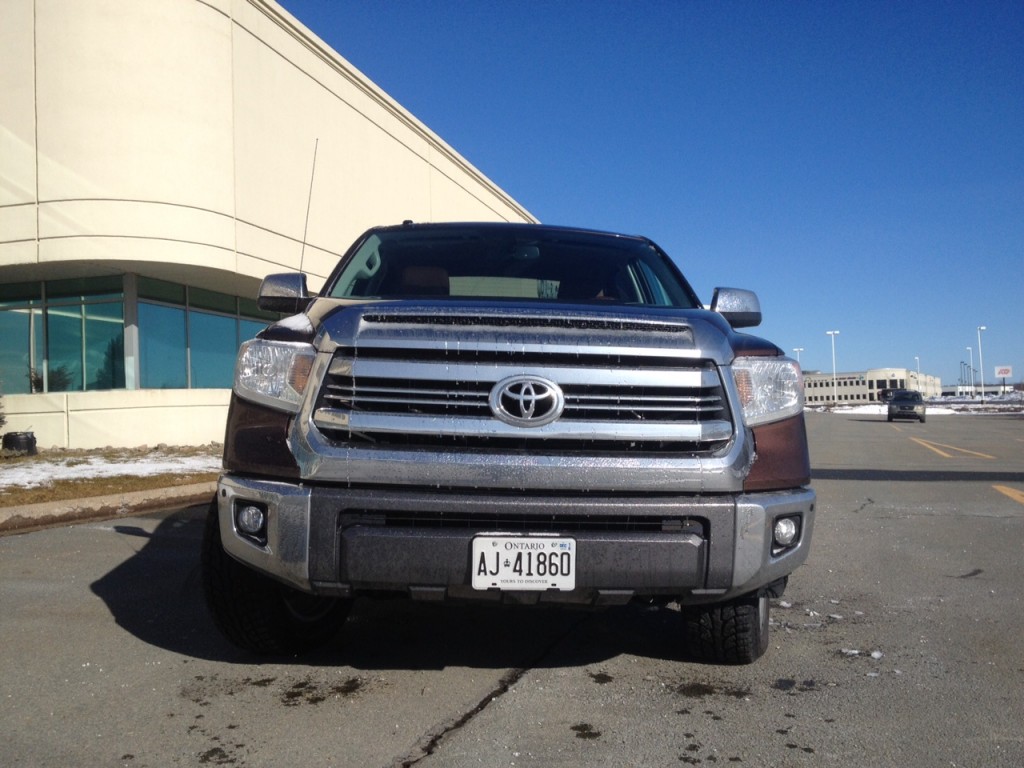 If you are in the market for a Tundra you’ll get two engine options to choose from: a 4.6 litre V8 which produces 310 horsepower and 327 pound foot torque or a 5.7 litre V8 which makes 381 horsepower and 401 pound foot torque mated to a six-speed automatic. My tester was equipped with the latter. If you ever want to startle your neighbours then get yourself the 5.7 because at start up, especially with a cold start, the engine roars to life with gusto. The sound really is intoxicating to the point where you’ll have the urge to turn on and off the engine all day. It’s great.

As you can imagine, power is not lacking, however that doesn’t necessarily translate into quick acceleration thanks to the Tundra being a bit of a porker weighing in at over 5,000 pounds. It can, however, take care of towing duty up to 10,500 pounds. 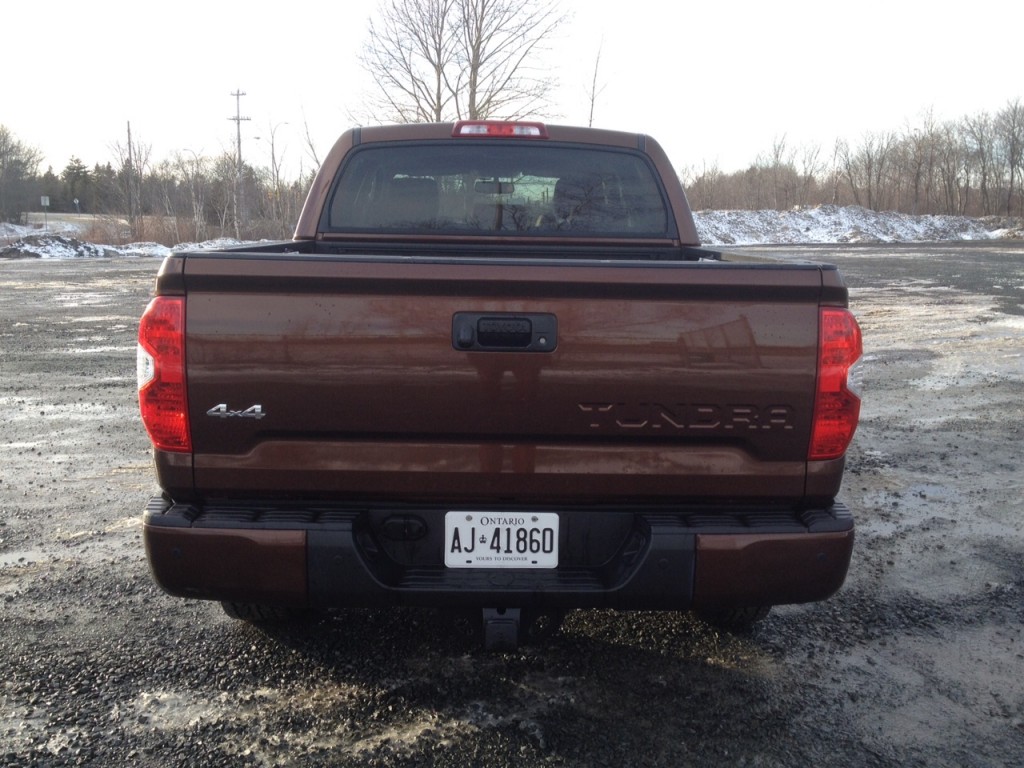 The Tundra’s road manners are predictably comfortable, especially on the highway, however it suffers from the same shaky problem that the F-150 equipped with the off-road package has when you run over significant bumps and potholes. Outward visibility is really quite good though, perhaps even best in class.

Around town, the Tundra isn’t exactly nimble, but never at any point did I find it difficult to maneuver. The excessively light steering made parking a breeze, but its long turning radius made taking regular turns a bit more of a task.

I did get the chance to do some light off-roading and the Tundra is definitely up to snuff. 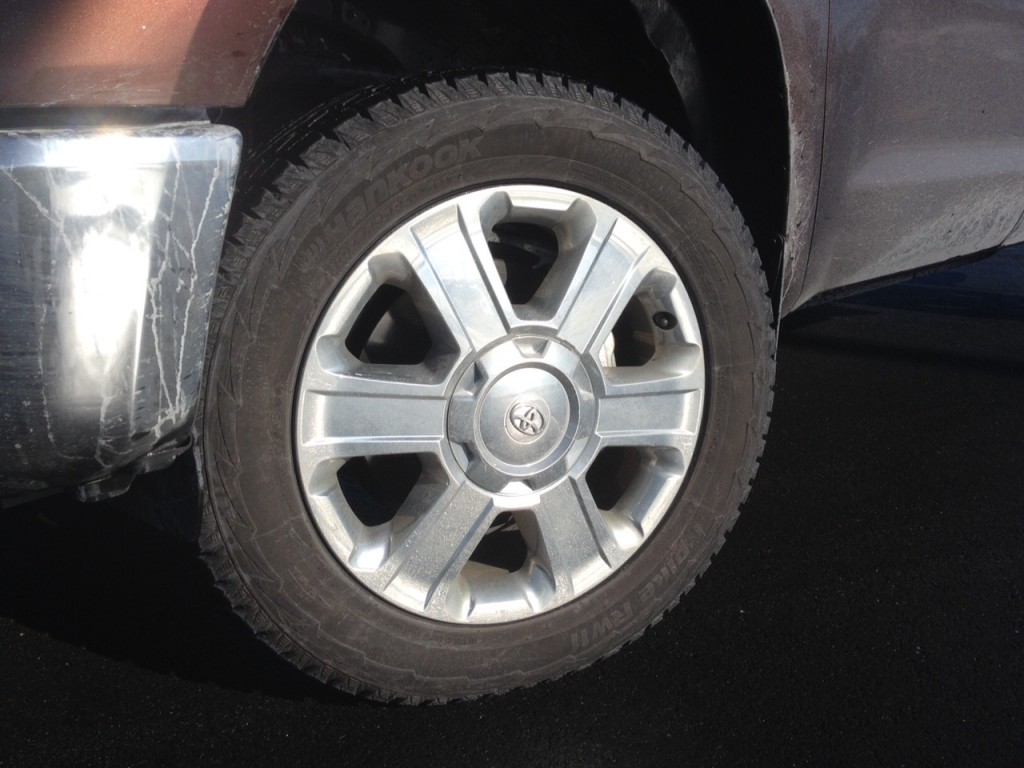 What isn’t up to snuff, however, is the Tundra’s fuel consumption results. Officially, the Tundra with the 5.7 litre engine is rated at 18.2 L/100 kms city and 14.1 L/100 kms highway. Those are eye-popping numbers no matter how you slice it. The saving grace is that I did do a fair amount of highway driving and landed at 16.8 L/100 kms at the end of the week. That’s significantly better than the 19.2 L/100 kms I managed with Tundra double cab two years ago, but it’s still a very hard pill to swallow. The only thing that helps ease the pain is the relatively low gas prices 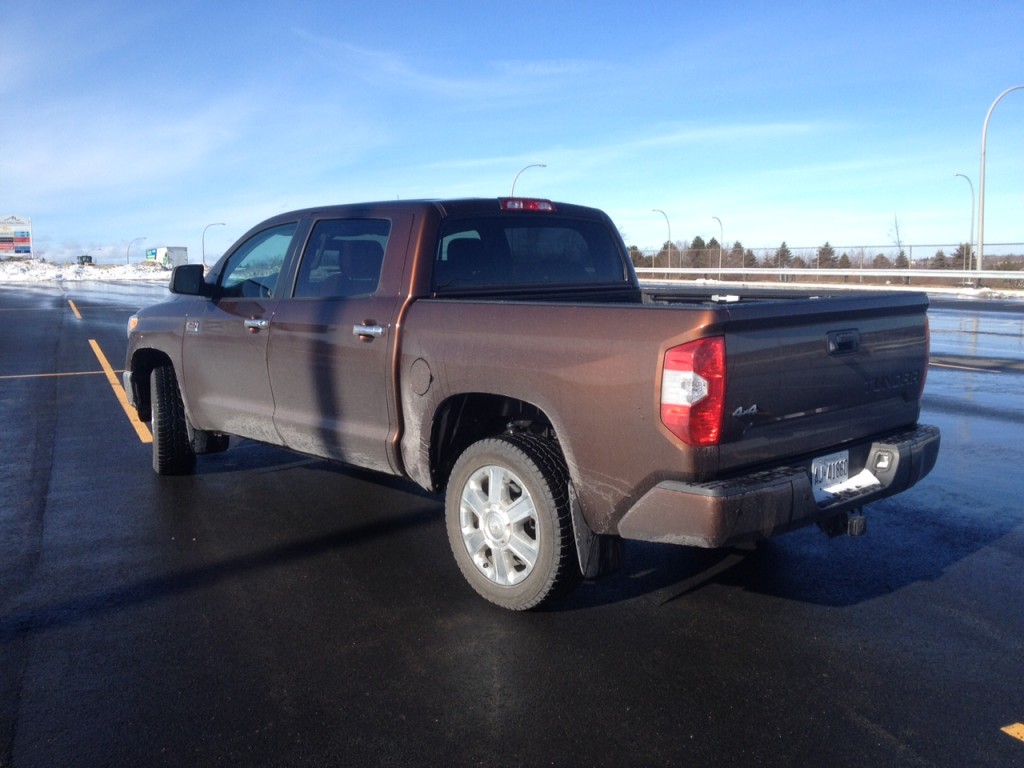 While there’s no denying that this is likely the most Americanized iteration of the Tundra ever, and that the Tundra offers up many positives, it still isn’t competitive with the Yankee offerings. American trucks of today are equipped with a lot of interesting and innovative features and tech whether it be air suspension, 8-speed transmissions, aluminum bodies, turbocharged engines or even diesel engines. American trucks also offer a lot of features that just aren’t available on the Tundra, not even on the top of the line 1794 edition, such as keyless entry, LED or HID headlights, or even running boards. Those are particularly necessary because you might rip your pants in an unfortunate area while climbing up into the cabin. I’m not saying that happened to me, but it did happen to a  friend of mine, which admittedly provided me with a good laugh, but I suspect that would get old quickly. 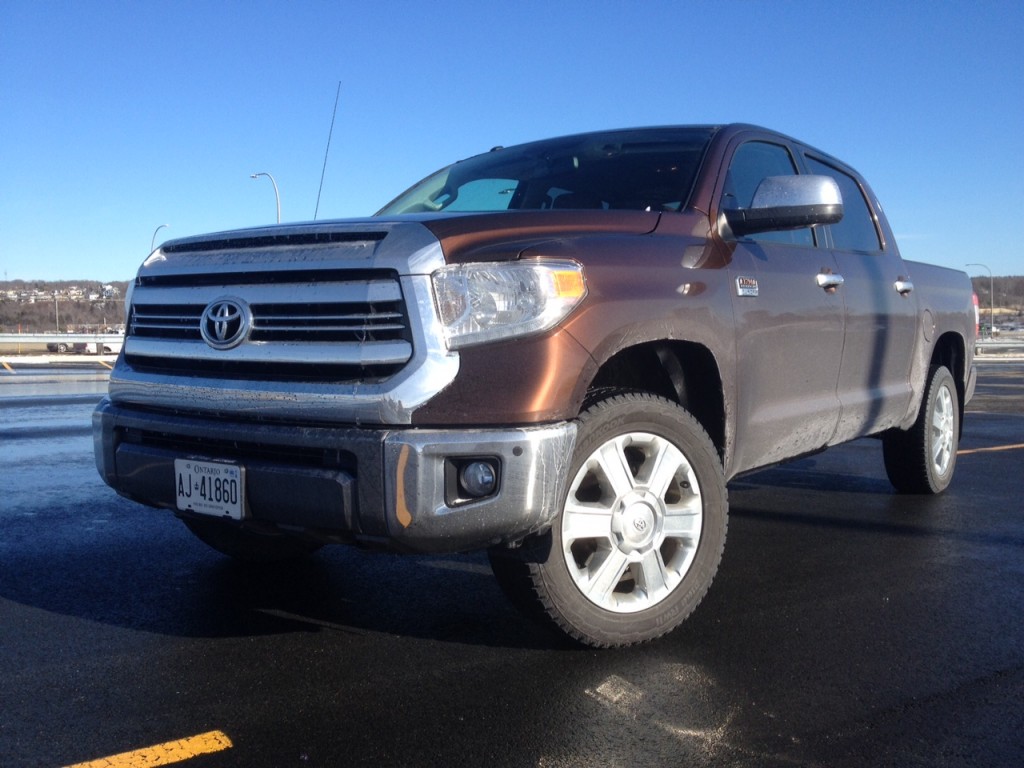 The fact that there are only two engine options, both V8’s, just signifies that the Tundra still has some way to go before truly being competitive with the Americans despite the so-called American roots of the 1794 edition. With that said, if all you are looking for is a comfortable truck that can easily tackle urban roads with comfort and ease, all while still being capable of typical ‘truck stuff’ then the Tundra might be worth taking a look at.