As I pulled up to the bottle recycling depot, I already had that feeling.

It’s the feeling you get when you get the sense that someone is watching you. Backing the weekly press car – a Kia Optima – into a spot I got out and he was immediately standing on the other side.

He was a young man, medium height with a baseball cap on with a scruffy face and a cigarette hanging out of his mouth. Not once did he look up at me as I got out of the car and started unloading the empty bottles. It was almost like he was transfixed, staring intently at the car.

As I waited for my bottles to be counted I kept a bit of an eye on him to make sure he did nothing to the car. He went around to the front and that’s when his eyes almost popped out of his head like a cartoon.

That’s when he finally looked my way and asked, “is this really a Kia?” as if I had gone out of my way to put Kia badges on a Lexus or something.

When I confirmed what he was looking at he continued to examine the vehicle up and down, walking slowly around it as if it was an intimidation tactic used by police in an interrogation.

He then looked back up at me.

I again confirmed. He then came up to me and proclaimed, “Puck, that’s nice!”

Alright, so he said a word that rhymed with ‘puck’, but there was no denying that this guy’s mind was completely blown.

Being an automotive journalist, I am lucky enough to get the privilege of driving new cars every week, but in a way, it has jaded me in terms of how ‘normal’ people see cars. To me, this was just a typical Kia. I am well aware of the significant strides made by the company in a relative short period of time. I already know they make borderline premium looking and feeling product for incredible value. I already know that they can now legitimately play with the big boys in pretty much any segment of the industry. 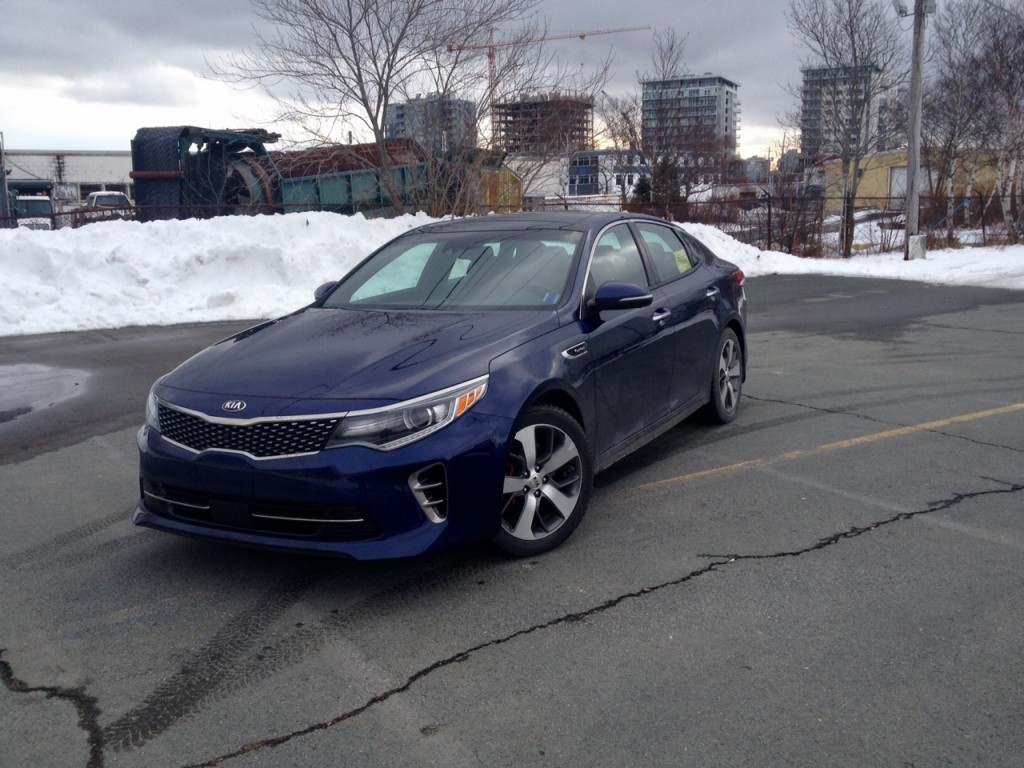 However, I will admit that this particular Kia was indeed a bit unusual. For starters, it had turbo decals along the side, which, as it turns out, was the first thing to draw the young man’s attention. While I personally think adding turbo decals is a bit too ‘Fast & Furious’, there were other styling details which showed that the highest trim level of the Optima meant business. There were red painted calipers and a rear diffuser. I suppose those elements are needed because in my personal opinion, there Optima has been softened down in terms of style. The original Optima was a looker. It was sleek, sharp and had presence. There was no mistaking it for anything else. And while the updated version might not cause anyone to realized that it has indeed been redesigned, I can’t help but thing that the re-worked taillights look a little too conservative and boring along with wheels that kind of scream ugly. Then again, if this guy’s awe was any indication, my opinion that the new look is softened down too much is certainly in the minority. 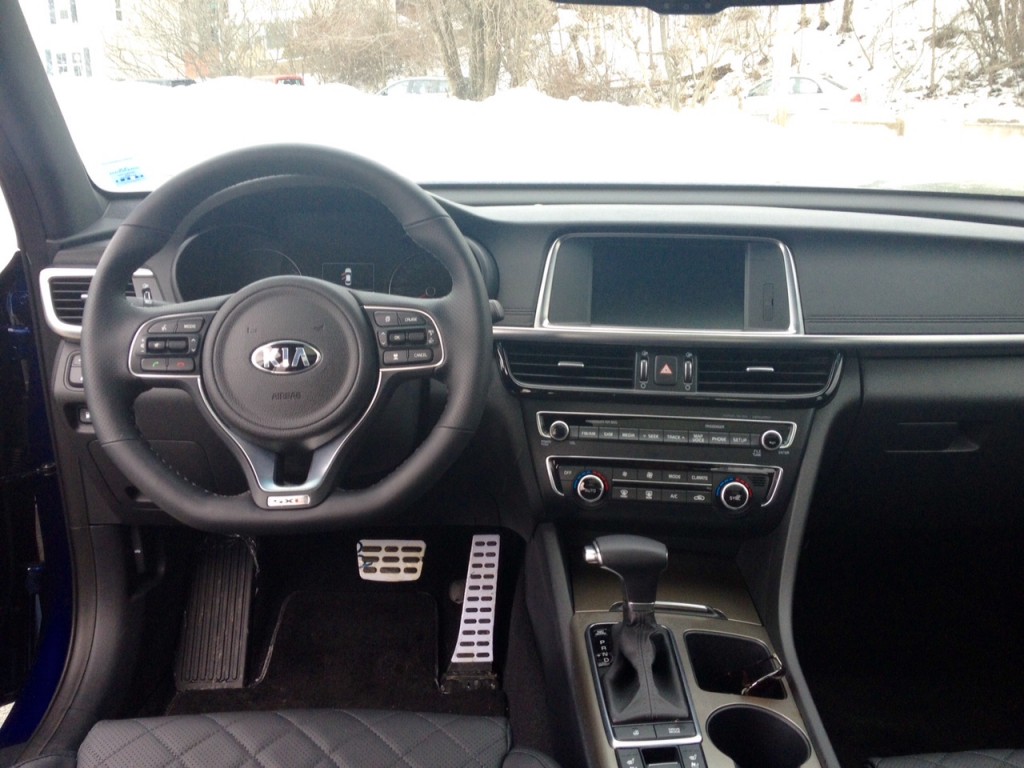 After chatting with the gentleman a bit longer about the car, I opened the passenger door for him to take a peek inside. He had another “Puck, that’s nice!” moment. And I agree. The first generation Optima really raised the bar in terms of premium feel. This second generation is no different, but like the exterior, you could say it’s been toned down a bit. But the design is still nice if a bit more like the interior of its cousin the Hyundai Sonata.  But the fit and finish is certainly impressive and there is a simple yet logical lay out for almost every button.

But besides attractive interior design wasn’t what immediately caught the attention from my new friend. He was blown away by the quilted Nappa leather seats. I agree with him on this point. I don’t know of any player in the non-luxury mid-sized sedan segment that offers this quality leather with such an attractive design. 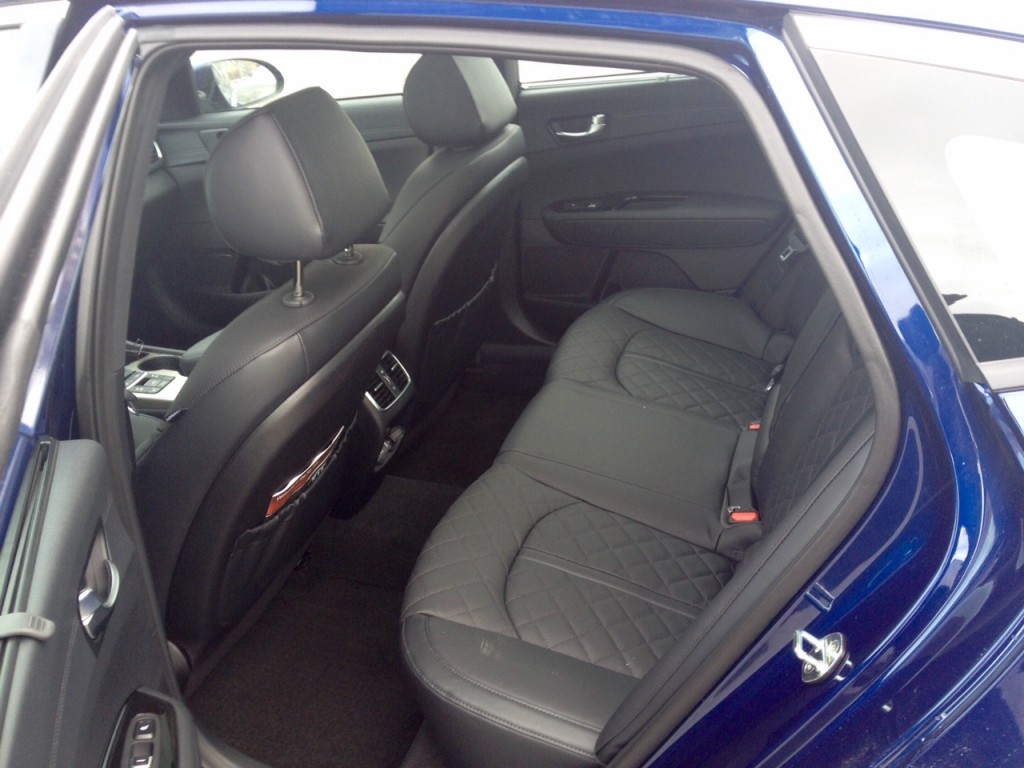 Then his attention turned to the infotainment screen to which he proclaimed that it looks like they took it directly from a BMW. While I don’t know if I would go that far, it’s true that it again takes a more premium look. The 8 inch screen provided excellent quality for the back up camera which also included an around view feature making parking a whole lot easier. The infotainment system itself is quite easy grasp and is also logically laid out.

Harman/Kardon takes care of the audio and as you’d expect it’s a pleasure to your ears, and another neat feature is the wireless charging pad in front of the gear shift. If you have a newer model Android or iPhone, all you need to do is place it in the charging area and voila, your phone starts to charge. Since my iPhone is no longer considered new I couldn’t test this feature but I’m told by a fellow auto journo that it works just fine. On top of that, Kia has introduced Android Auto which allows your phone to interface with the infotainment system, essentially giving you the ability to put your phone’s menu on the car’s display screen. Apple CarPlay is not available just yet but Kia says it will be coming down the road.

Interior room is decent, but as is the case with most ‘four-door coupe’ shapes, head room isn’t as plentiful, but leg and knee room is excellent. On my tester’s top trim, rear passengers also get to control their own climate and there is also heated seats for them as well. 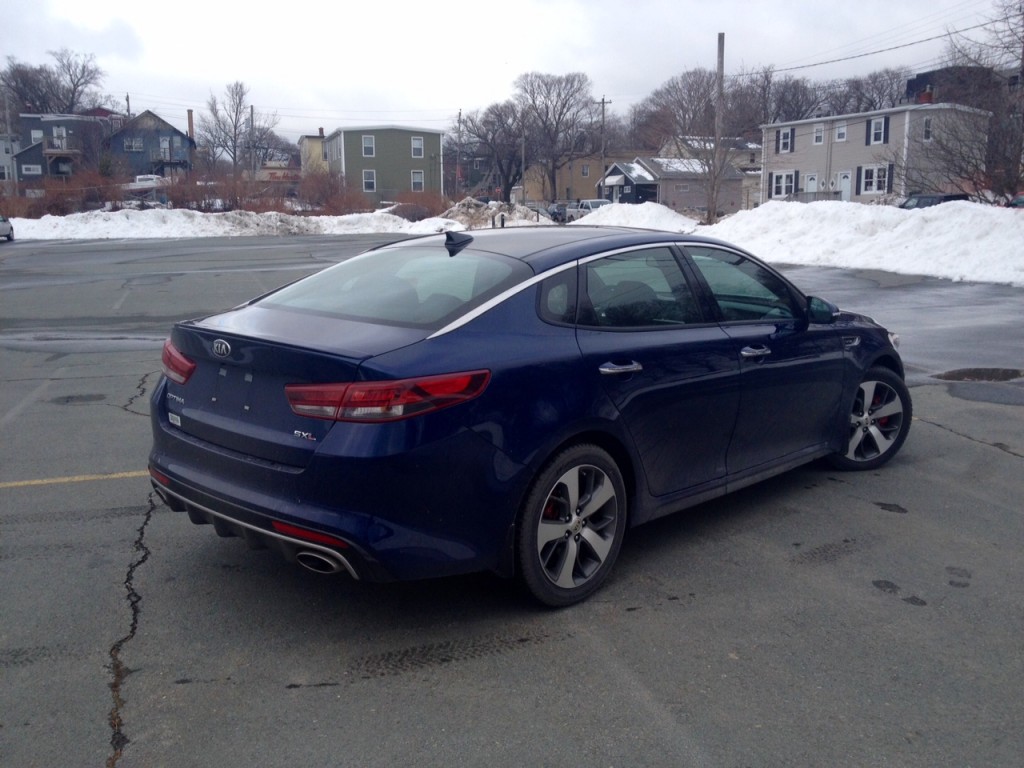 There are three engine options to choose from depending on which trim level you choose. There is the entry level 2.4 four cylinder making 185 horses and 178 pound feet of torque. Then there’s the top of the line 2.0 litre turbocharged engine found in my tester which produces 245 horsepower and 260 pound feet of torque. What’s interesting is that the horsepower numbers are actually down, however Kia promises that it is quicker than the older unit. But perhaps even more interesting is the third brand new engine choice: a 1.6 litre turbocharged engine which is good for 178 horsepower and 195 pound feet of torque married to a 7 speed dual-clutch automatic. Of all the engines it is the most efficient, yet you still get a decent amount of boost from the torque. The downside? Well you can only get it in one trim level, the mid-trim LX Tech. I’m not sure why Kia is limiting this intriguing engine/transmission combo. 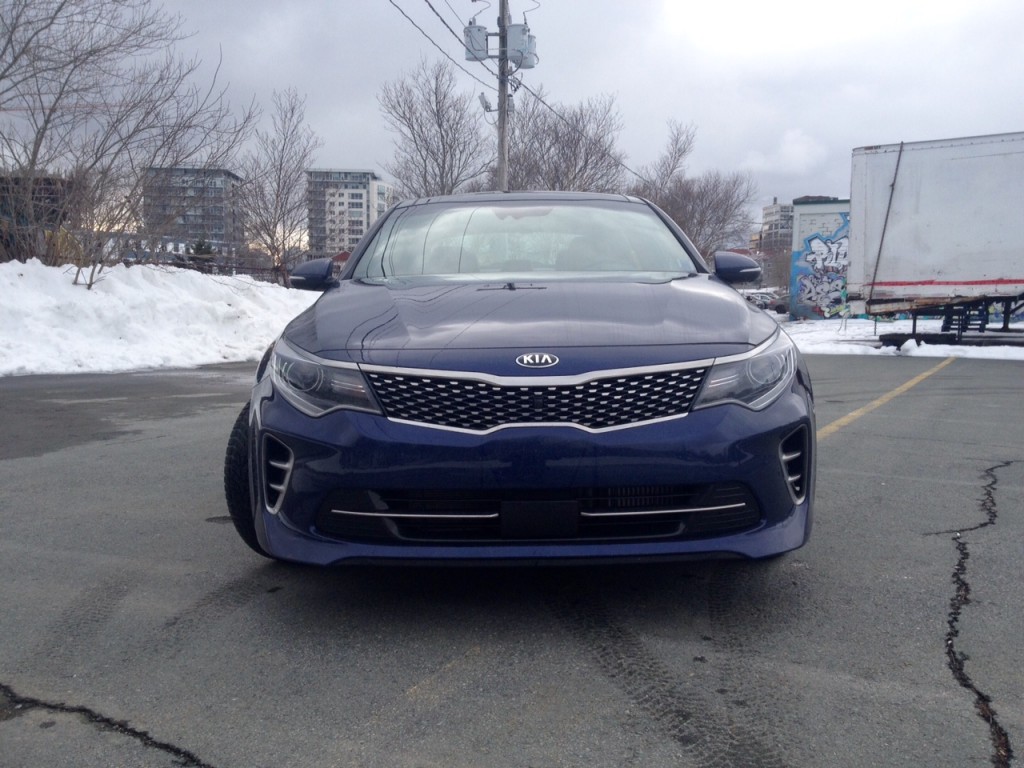 But the top of the line 2.0 litre more than makes up for it in terms of acceleration and responsiveness. This is especially true if you keep the Optima in normal or sport mode, but if you’re in eco mode and you feel a sudden jolt of testosterone, the engine will still happily comply. However you’d best be advice to limit the amount of times you want to take off like a slingshot and I’ll get to that in a moment. 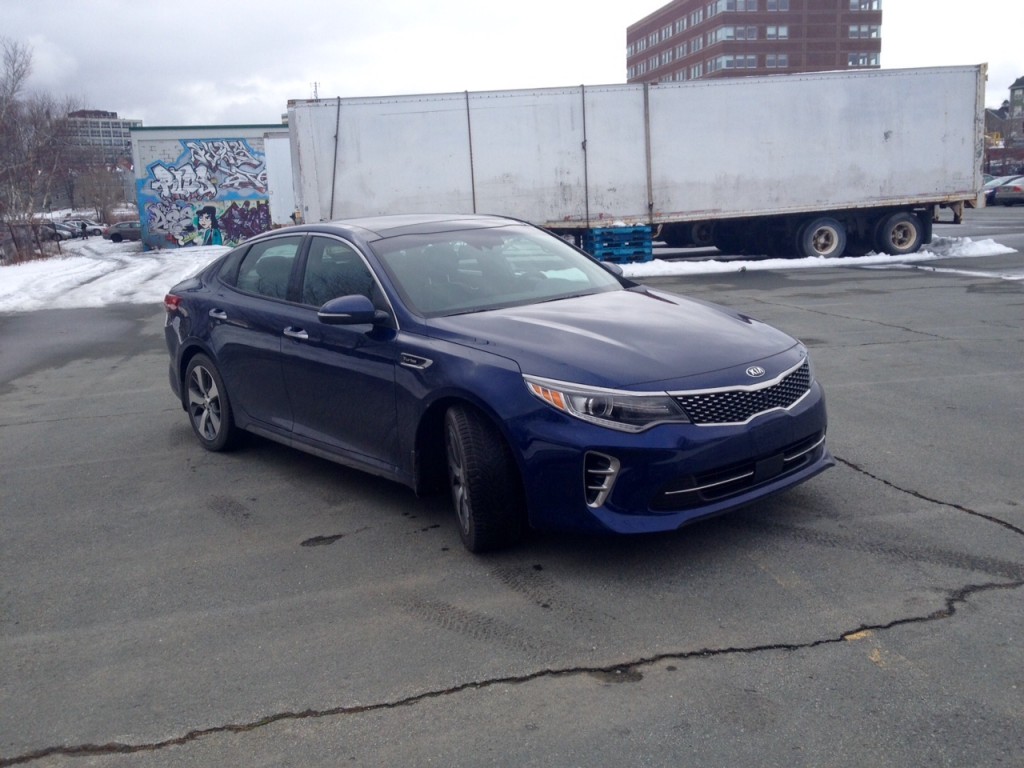 On the highway the Optima glides seamlessly, providing good quietness to the cabin, with all that torque on hand for passing. My tester had adaptive cruise control, lane keep and blind spot warning. Combined that with the comfortable seats and great stereo and you’ve got yourself an excellent road trip companion. 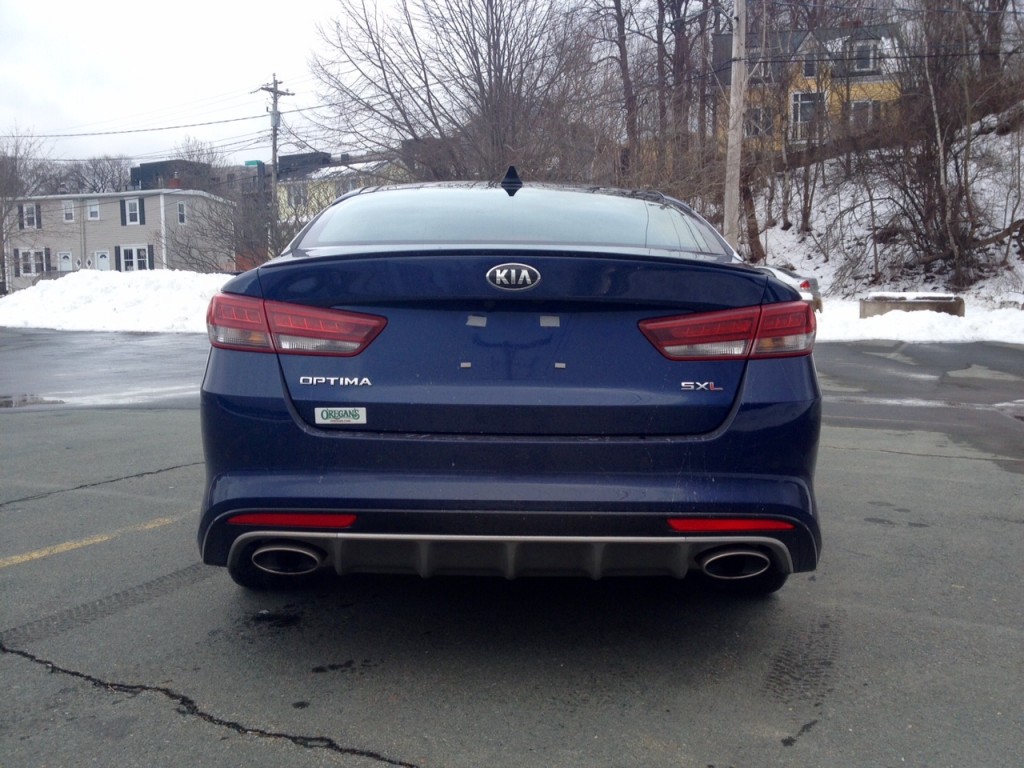 In the corners, the Optima can hold its own, however it does still feel like a big car and understeer can be prevalent if you push it too hard. The steering is electric power and responsiveness is decent, though I personally prefer a bit more feedback, which you do get a bit more of in sport mode. 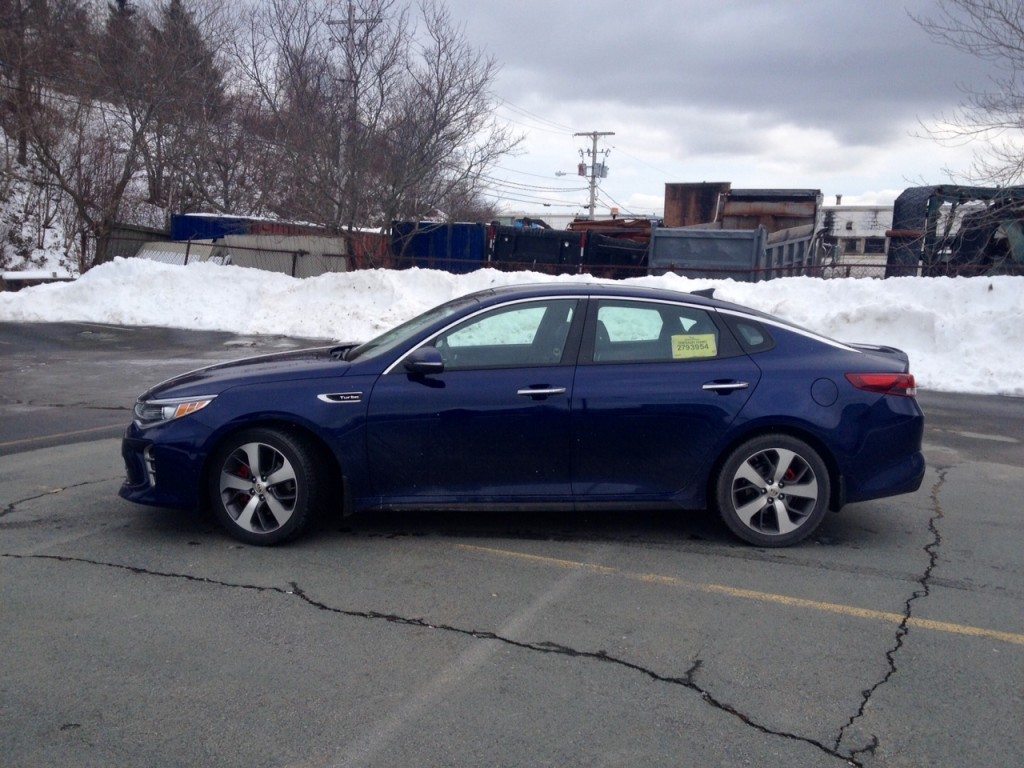 The problem with just leaving it in sport mode is that you pay for it at the pumps. In fact, you might pay for it at the pumps regardless because I kept it in eco mode for about half the time and I returned 12.9 L/100 kms in mixed driving. Kia claims the Optima with the 2.0 engine gets 10.9 L/100 kms in the city and 7.4 L/100 kms on the highway. I’m sure I would have done even worse than 12.9 had I kept it in sport mode the whole time or even in normal mode. That’s disappointing mileage for a 4 cylinder. 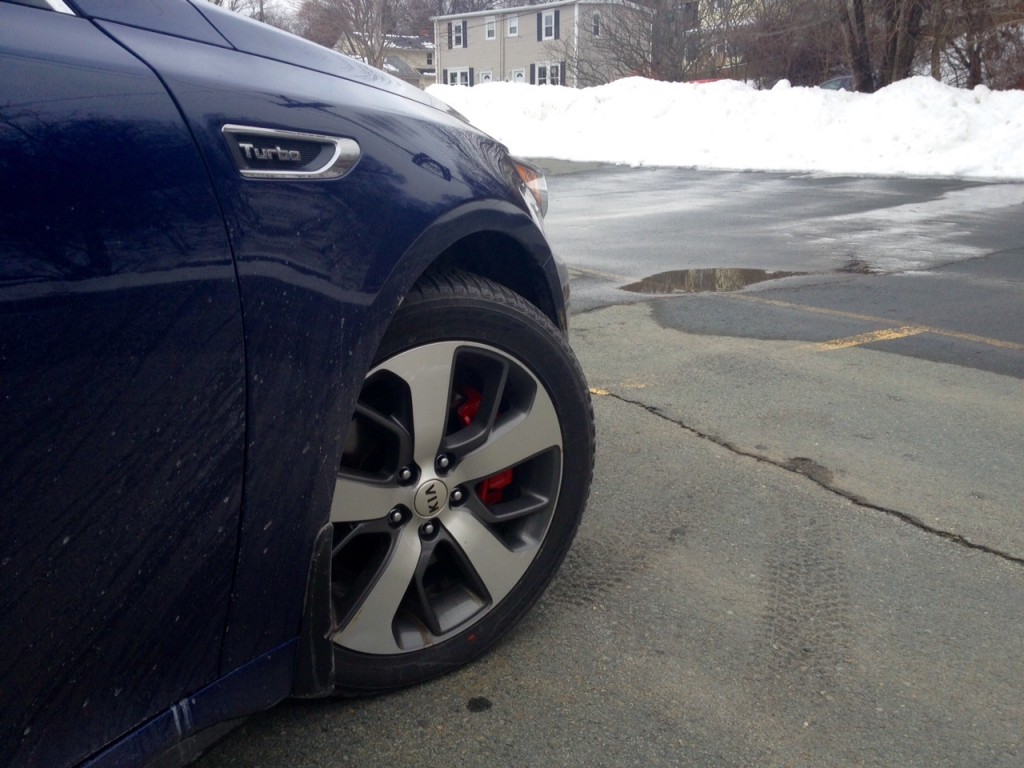 Although Kia may have softened the image of the Optima it’s clearly still a looker and it’s also clear that they aren’t done shocking people with premium feel and value. This Optima is no exception, in fact it may be one of the best in the segment, I’d say top 3. However even with value in mind, this version costs just shy of 40 grand which is a lot for what is essentially a family car. You might lose some niceties, but I’d say the best bet for now is to go with the LX Tech trim with the new engine, it seems to be the best bang for the buck out of the whole line up. 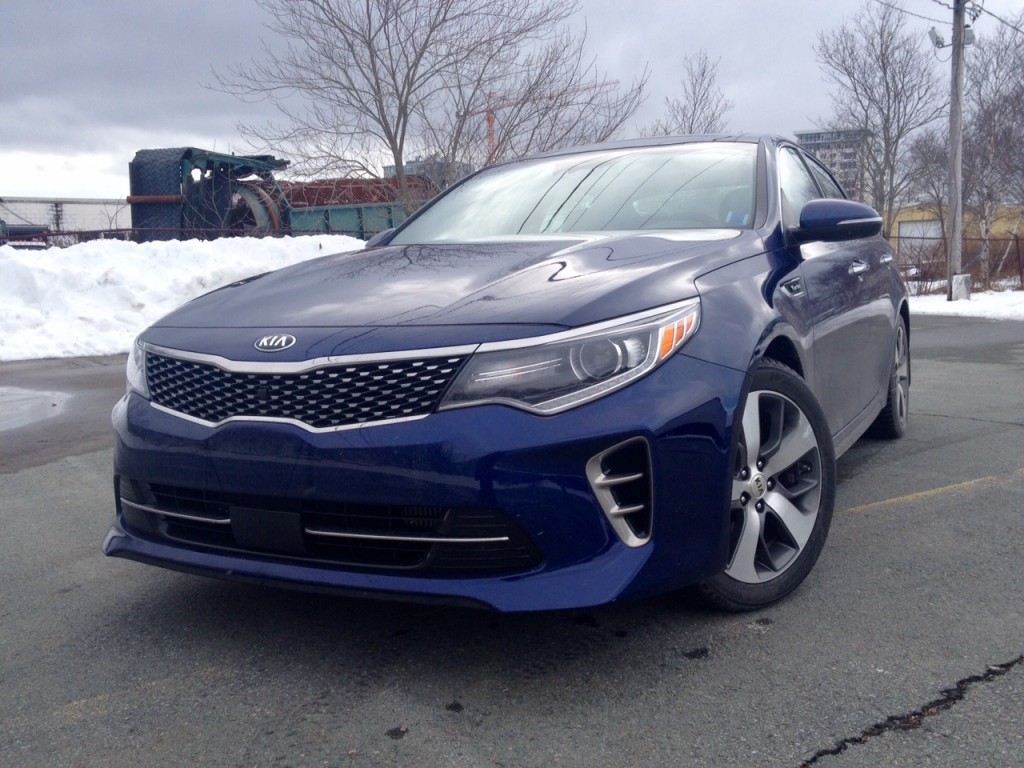