Despite being told otherwise, I don’t necessarily fancy myself to be a talented writer. Most of my reviews are ‘light reads’ as you may have noticed. A big reason why I write in simple, easy to understand language is because I am mindful of my audience. This isn’t meant to me insulting to you, dear reader, but rather it is because my target audience is people who don’t care about cars.

I want to get this demographic because people who don’t care about cars are the majority. If they weren’t, everyone would be driving more interesting vehicles like GTI’s or JCW spec’d Mini Coopers rather than the Corollas and CRV’s you see everywhere on the roads. They are the ‘normal’ people who just want something sensible. And because they clearly just want to get from point A to point B without a fuss, the assumption is they don’t know or don’t care about the typical jargon us auto aficionados love to drone on about like DCT, torque vectoring, turbo spooling and so on. Therefore, I don’t tend to write much about those things.

But every now and then ‘normal’ people surprise me. Case in point, someone I work with, who owns two Hyundai Accents because she “doesn’t care about driving”, surprised me after I asked her what her dream car would be: a white Hyundai Veloster Turbo. Even more shocking was the fact that I had that very same vehicle as my tester for the week. Her eyes lit up when I told her. It was what I imagine my face looks like when I’m told my tester for the week is equipped with a stick.

Although time constraints prevented me from taking her for a ride in her dream car, it did make me realize that normal people tend of have ‘wild sides’ every now and then. And when they do, they the sensible side still kicks in as they rarely don’t want to spend lots of money.

This is where the Veloster Turbo comes in. With a starting price of just over 27 grand (before taxes and fees), it promises to be an interesting affordable car. But is it really? 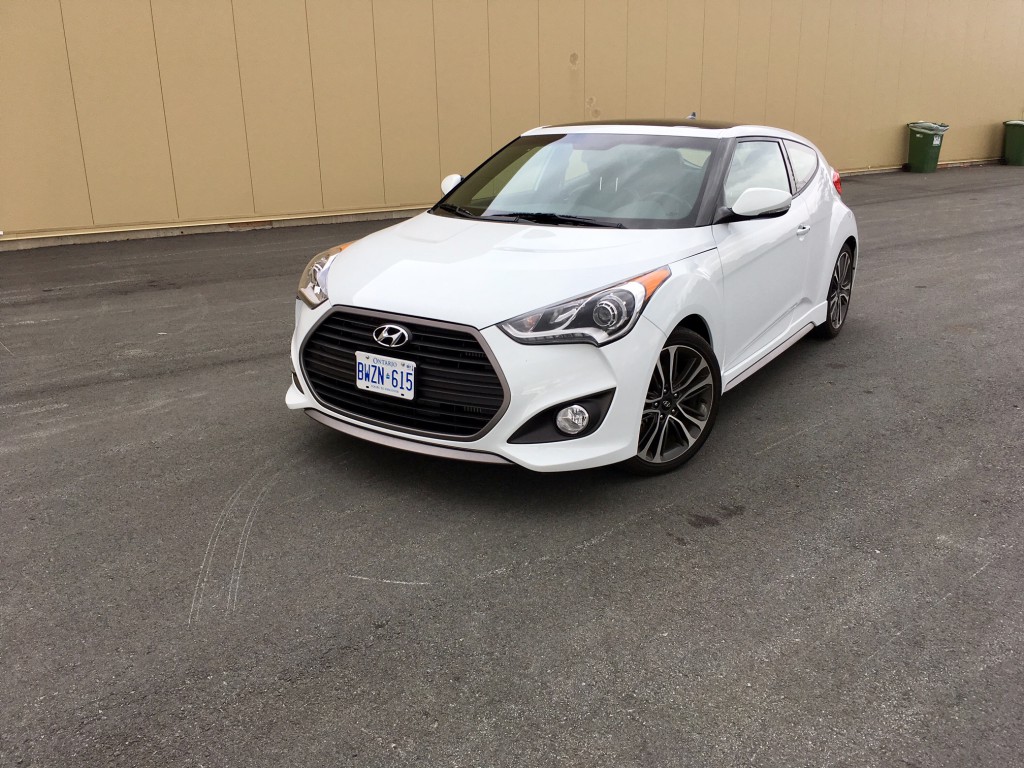 When the Veloster came onto the scene about five years ago, its design was certainly unique and indeed it still is. I can’t think of anything like it on the road today with its wide, low stance, and hunkered down rear. It also looks like it has a bit of a split personality, looking like a three door hatch from the driver’s side, but a five-door hatch from the passenger side.

The Turbo dares to up the ante with a wide-mouthed grille, very nice looking wheels, and a reworked rear fascia which includes LED tail lights, circular reflectors, a rear diffuser and two big tail pipes right in the centre. 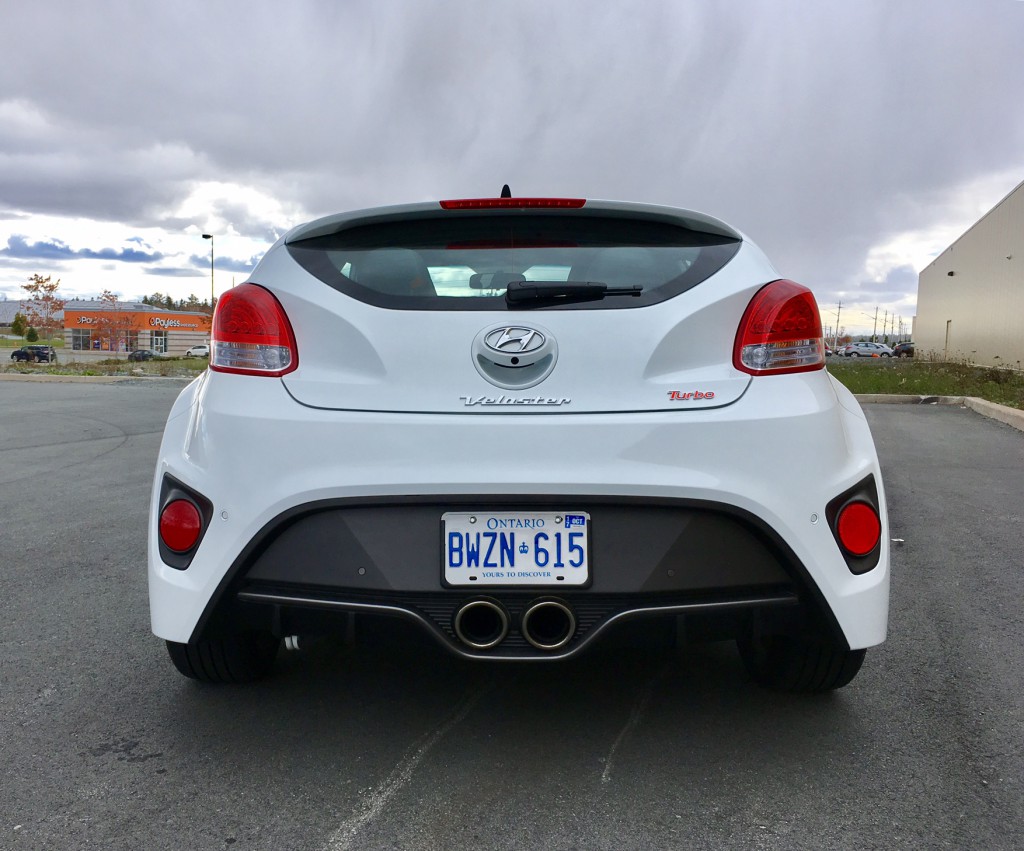 Personally, this look is not anywhere near my cup of tea (I’d go so far as to call it ghastly), however it should be said that, five years later, the Veloster still gets attention from the general public. This is a feat most automakers wish they could claim so even though it pains me to say so, the designers should be commended. Besides, whether we are normal or are car nuts, it’s safe to say our dream cars – no matter what they are – have some measure of standout style, so the Veloster definitely fits the bill. 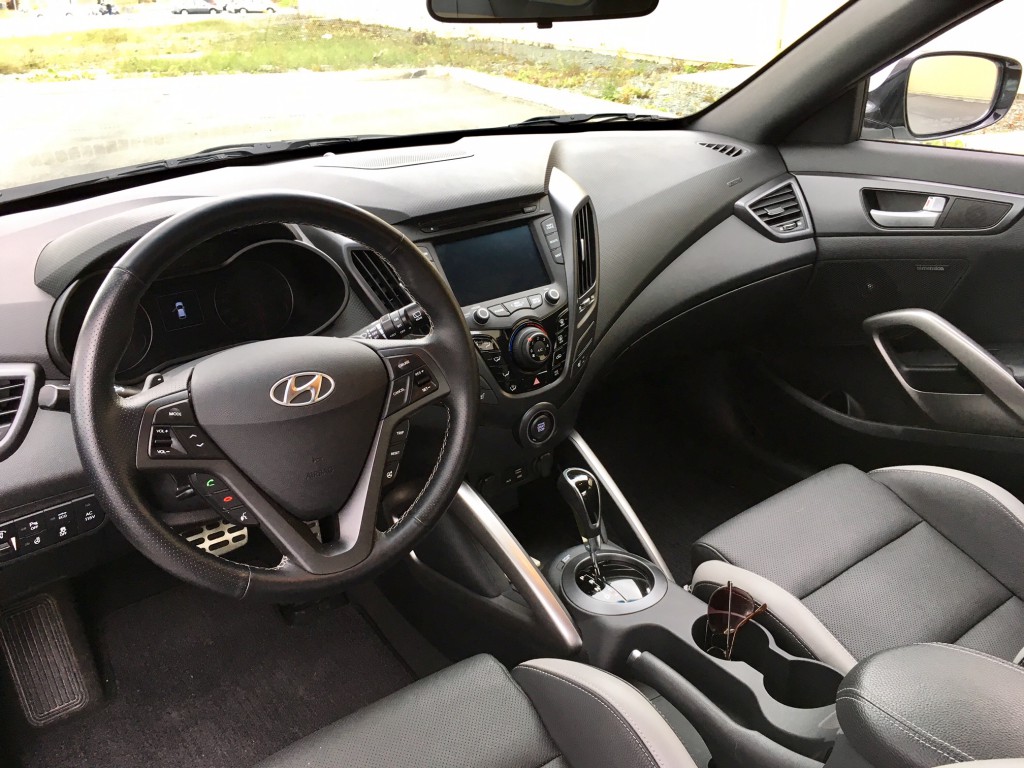 While the five year old exterior design can be excused, I’m not entirely sure the interior design can be as well. It certainly looks dated, though that isn’t to say that it is a horrible interior. The controls of the centre stack are still neatly placed and well within reach, though the single dial which controls both the fan speed and climate is a bit cumbersome. The infotainment screen still does the trick adequately and quality of materials is just fine. Given the audacity of its exterior styling, Hyundai obviously couldn’t go completely tame with the interior so the Turbo also features a push start button placed smack dab in the middle, which I actually kind of like, along with uniquely designed door handle grips which I also like as they were completely functional as well – perhaps more so than traditional grips. I can’t say that I liked the Turbo stitching on the side bolsters, which used to be placed on the seat backs; it feels a little 2 fast 2 furious.

Being a Hyundai, value is still top of mind. My tester included a heated steering wheel, heated front seats, keyless entry with the aforementioned push start, and an eight-speaker Dimension audio system along with a large sunroof. 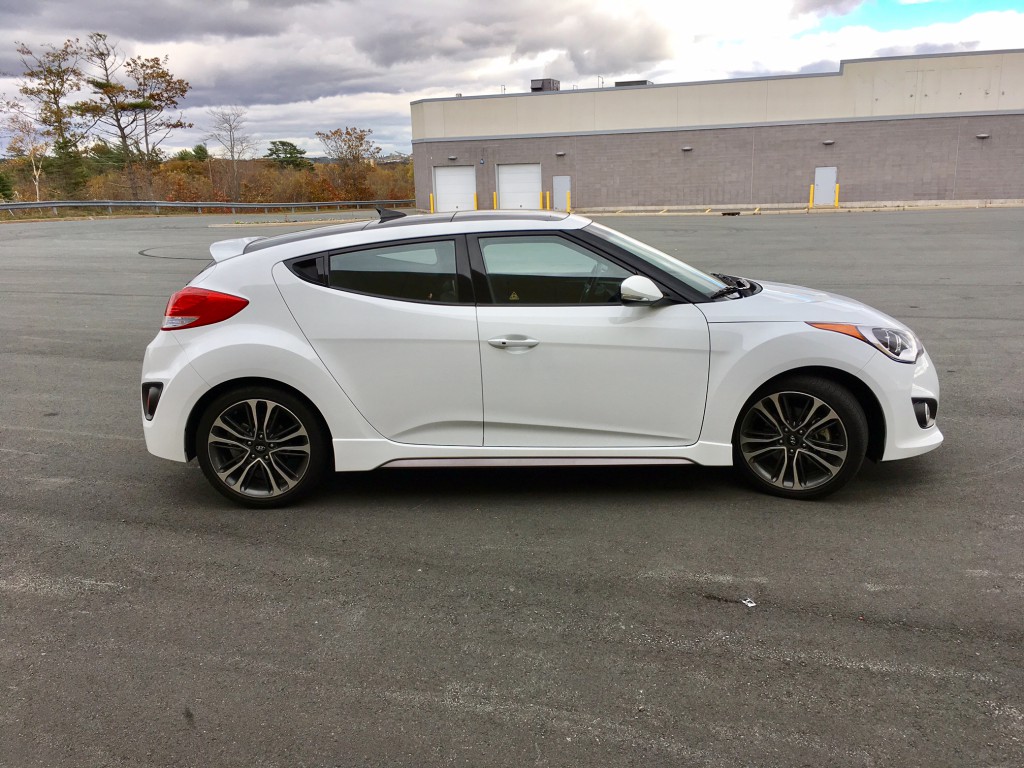 Unfortunately, the swanky design means exterior visibility takes a rather substantial hit what with the humongous blind spots, and horizontal bar across the middle of the rear windshield. A rear view camera helps out, but it is difficult to parallel park or back into a space. This design also makes it difficult for passengers to get into the back seats (most who tried bumped their heads on the way in. Likewise it makes for little headroom. As such, it’s probably best to think of the rear seats as more of a place to but your briefcase, than your friends and family. However, in this case, it would be a lot more helpful to have the third door placed on the driver’s side, or to just make the Veloster a five-door and be done with it.

Rear cargo room isn’t huge, though it is fairly deep. The privacy cover has got to be one of the most frustrating covers I’ve come across in a long time. After closing the hatch, it would constantly get stuck upwards, completely impeding visibility. And since most people don’t expect that to happen, it isn’t until you’ve gotten in and taken off before you notice you can’t see out the back. You then have to pull over somewhere to force it back down. This happened on more than one occasion. 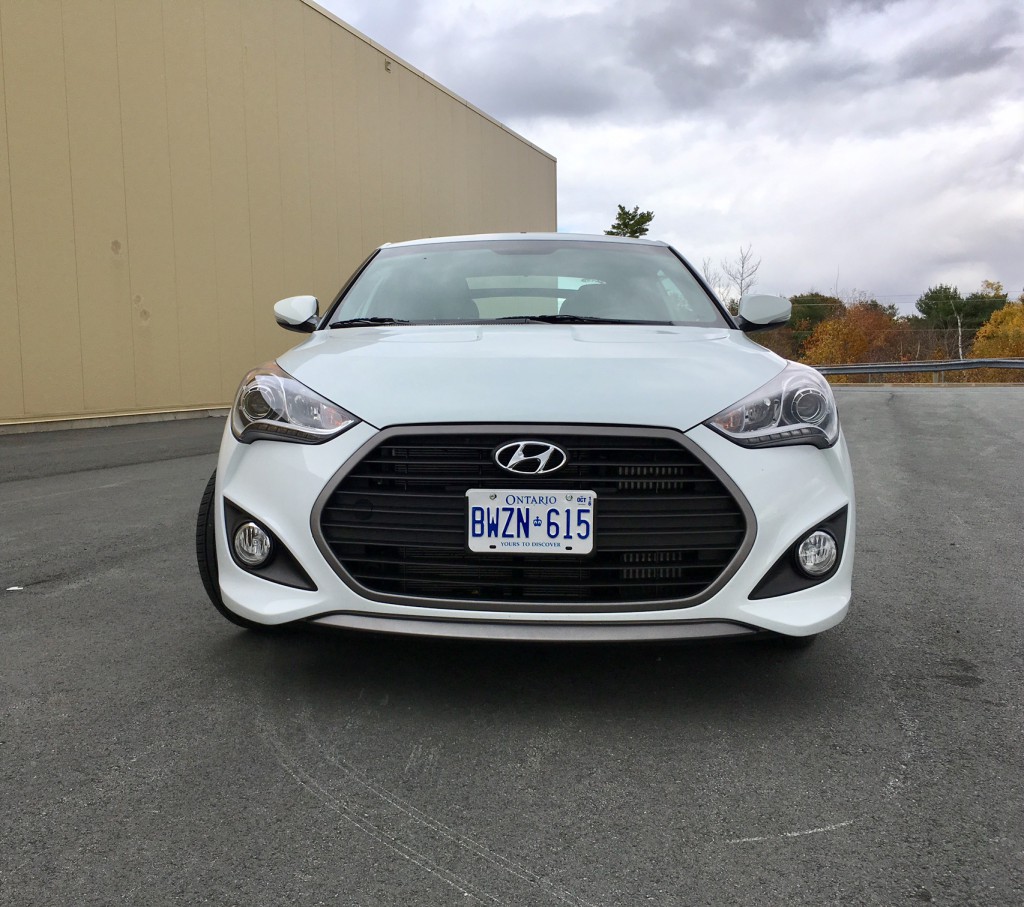 Being a Turbo you’d expect some inkling of power. The Veloster Turbo gets one engine option and it’s a 1.6 litre turbocharged (obviously) inline four capable of 201 horsepower and 195 pound feet of torque. That certainly is a recipe for fun in most small cars, but the big issue here is the transmission this engine is mated to: a seven speed dual-clutch (usually another good ingredient for fun).

Keeping my target audience in mind, a dual-clutch automatic transmission’s indent is to shift gears both smoothly and quickly all while preparing the next gear in line to help facilitate the process. Simply put, this doesn’t happen in the Veloster Turbo. There is a lot of lag when accelerating from a stop, though, to be fair, most dual-clutch transmissions have this issue, but once up to speed the gear changes are neither quick nor smooth. It really is puzzling. Should you try to take over and shift the gears yourself, you’re left with a similar result. It’s to the point where Hyundai might as well have just fitted it with a regular automatic – the results would have been completely similar but at least the expectations would not be so high. Besides, the six-speed manual not only saves you over a grand, but, as I found out in my test of the 2012 Veloster Turbo, it’s actually surprisingly good as well. Back then, of the six-speed manual, I said:

“The throws are short and effortless. While they fall a bit short of being direct, it’s good to know that Hyundai is paying attention to such details which are important if you’re going to make any sort of performance oriented car.”

Pity then, that they didn’t put the same effort into the dual-clutch automatic.

The Veloster doesn’t feel particularly quick all while not feeling particularly slow. However when brought up to speed, the Veloster does just fine – especially since the torque, though a bit laggy, comes into play to help propel it forward.  As such, driving on the highway becomes the Veloster’s forte. Overtaking is easy.

But when driving around town, you’ll want to head to your nearest Homesense in order to purchase a pillow for the seats. While they are supportive, the ride quality is just that jarring. It almost reminds me of that ‘hollow’ suspension feel that plagued Hyundai some years back which they’ve since remedied. Sure, this suspension set up may provide for little body roll in the corners, but other cars – like the GTI for example – is able to achieve that too all while maintaining some level of ride comfort. And speaking of handling, the Veloster does well, but I don’t have the same level of confidence as I would the GTI which is partly due to the hollow suspension feel but also partly due to some noticeable understeer.

Match all that with a strange duel clutch and some turbo lag and what we have is something that probably should have been executed a bit better. 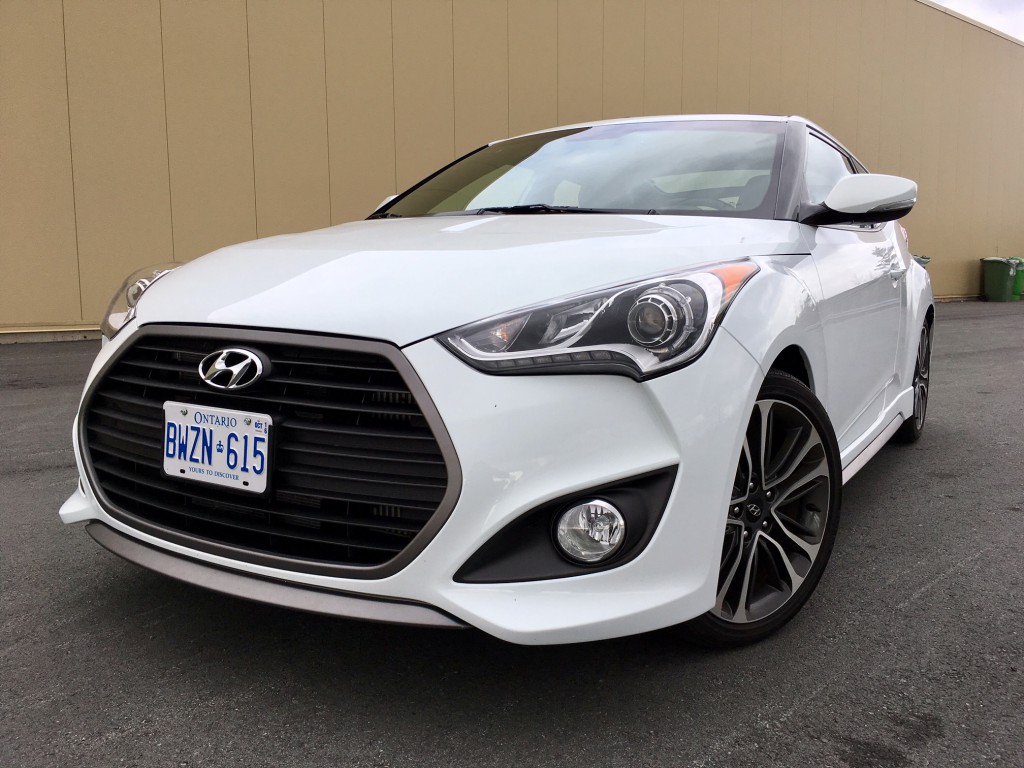 I say ‘should’ instead of ‘could’ because Hyundai knows how to make a formidable performance car. The Hyundai Genesis coupe, while not perfect, checks off most of the right boxes for a performance car. It deserves your attention if you are shopping in that market. But does the Veloster Turbo? I’m not so sure.

But then again, what do I know. I never once knew that a Veloster could be listed as anyone’s dream car. I never knew people actually liked that sort of styling. My tastes aren’t necessarily ‘normal’ when it comes to cars.

The Veloster may be out manoeuvred in a lot of ways, but it still retains one part of Hyundai’s formula for success: value. These days getting yourself into a cheap, fun to drive car is a bit difficult to do. But for normal people, that’s what they want. So in that sense, the Veloster Turbo may be able to make a decent case for itself.